This modern concrete house located in an old village on the hill in Jeju Island that the owner gave its name Yoojeongheon - means 'wind stays, sunshine caresses'. 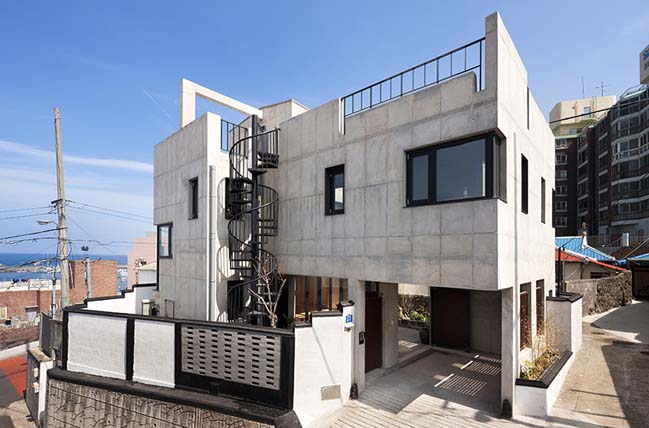 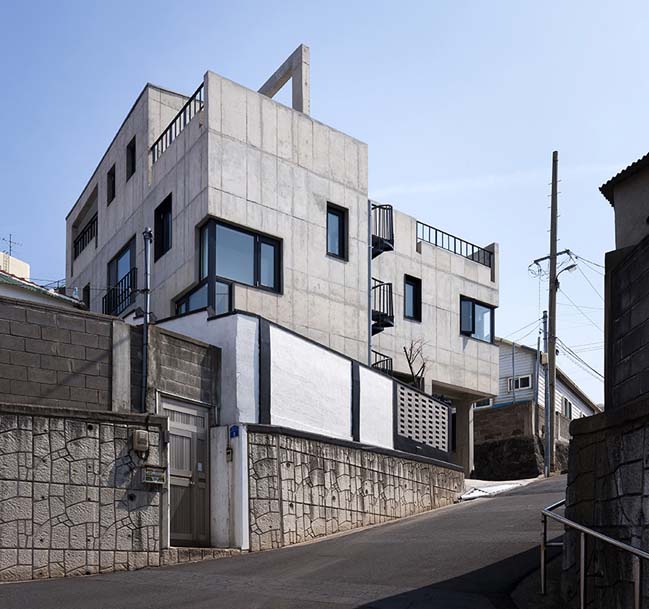 Project's description: This building is located in an old village on the hill that looks out to the North Port of Jeju Island and is built by an old resident of the village. He is a geologist and a teacher, and of course, he has scientific mind. 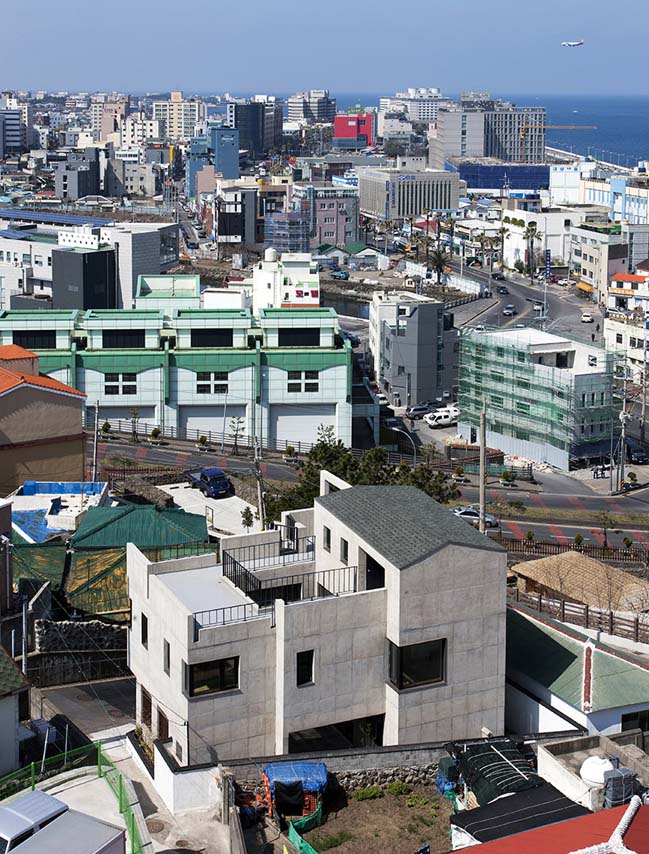 Like many, I have intolerance towards the term ‘science’. I distanced myself from its field and it seemed to have the same attitude towards me. 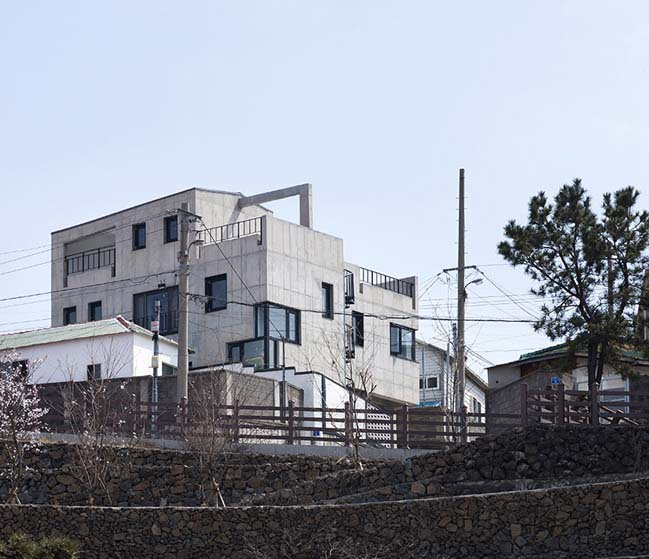 So my approach to look at and to interpret things is with sensibility. I, then translate the collective senses onto 2-dimensional representation and finally build it up with spatial narratives onto a physical ground. 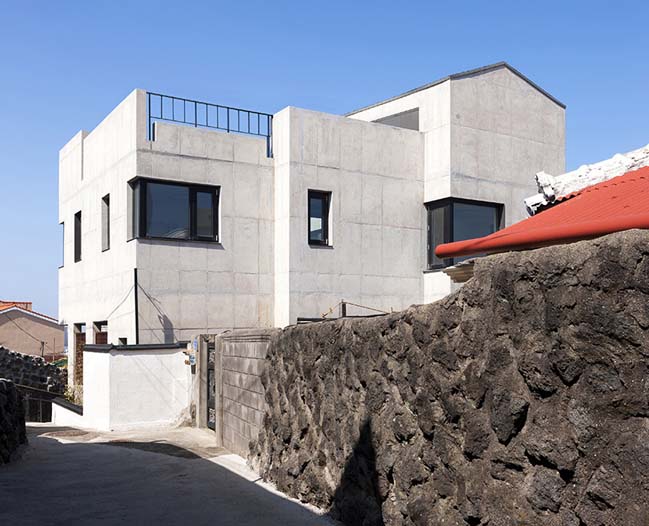 However, this time, the resident-to-be-geologist added more stories onto my pile. While designing the house I heard the history of the earth, a story about the life of a typhoon and the movement of the sun; and most of the stories were about the special location, which the house was later built to look out to:  the Jeju Island. 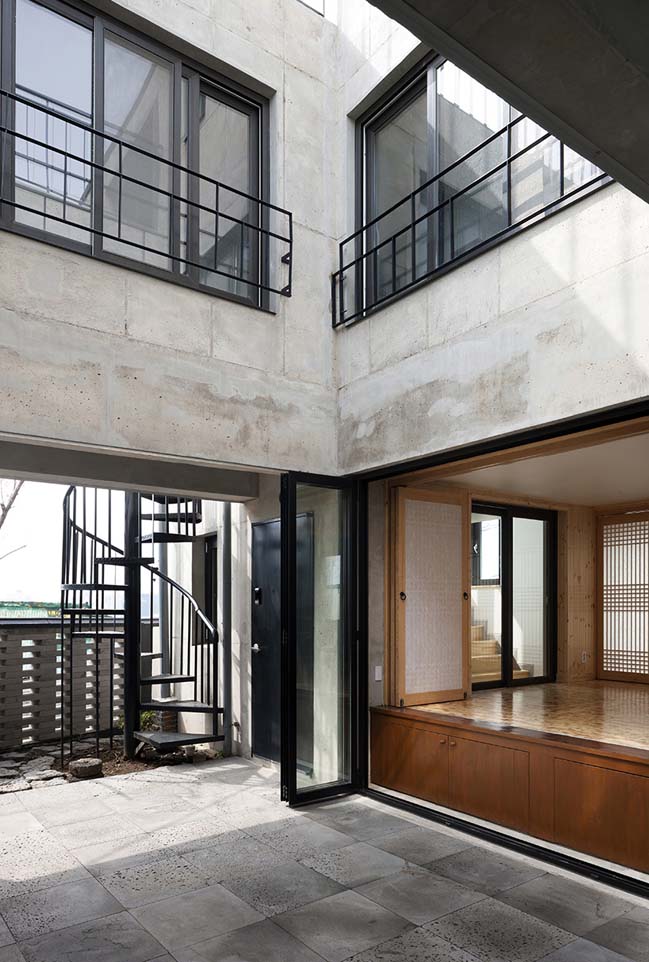 The house sits on a hill that is laid out a step back from the forefront of the beach. I was told, until not very long ago, the sea level was up to the bottom of the hill and underneath the hill itself was the birthplace of the legendary female merchant Mandeok Kim. 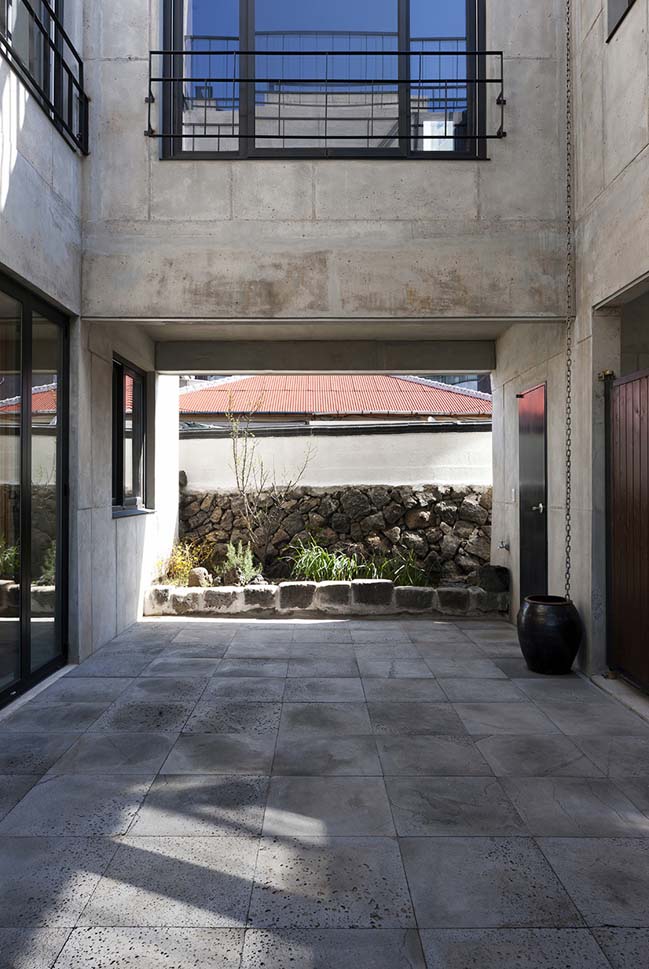 When I first visited the site, an old apartment building was standing with its back turned around and blocking the view out to the sea. Only some fragment of the ocean could barely be seen pass its side. 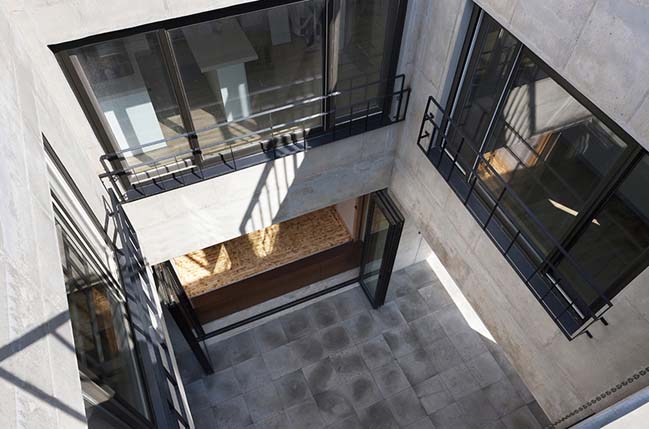 But as we began, an unexpected restorative project of Kim’s birthplace took place and the apartment disappeared during this time. Without being aware of its disappearance, I flew from Seoul to Jeju and got on a taxi to the site. As I arrived, I felt something different was grabbing a hold of me that I had to stop to take a look at the view. However still, I only felt that something about the scenery had changed and did not quite register the change to be the lack of a mass that used to block the view.

Only except for the time during his college years, the geologist lived in the same neighborhood for over 50 years. Although his old house was long gone, he tended the lot by cleaning up, decorating with pebbles and laying the ground with grass. On the way back from work, he would stop by to sit down next to the lot to read or to gaze at the sunset to think about a new house that would once be built in the location. 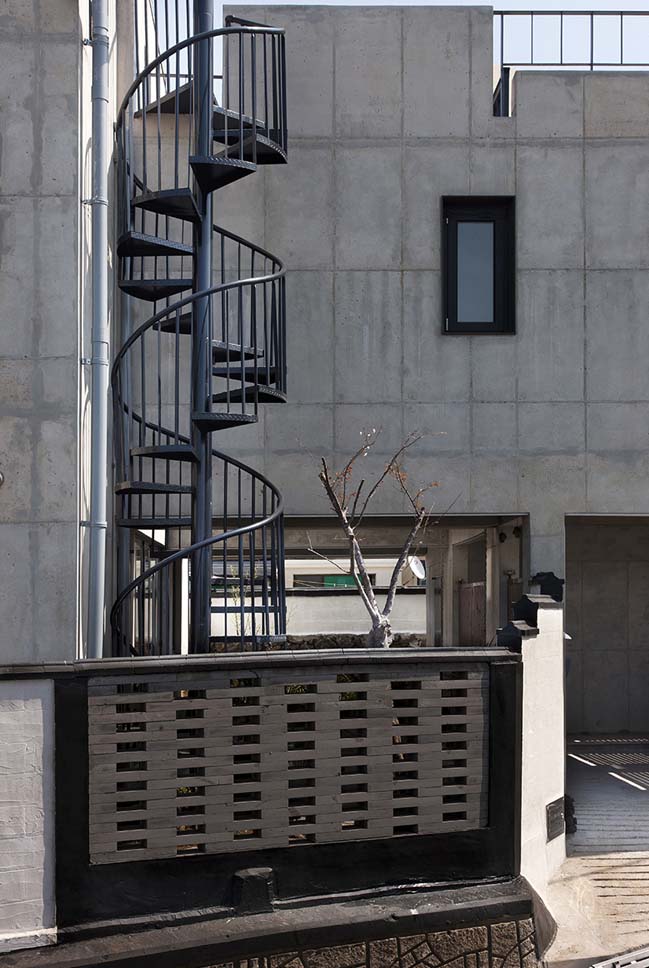 The lot was not large. It was perhaps about 130 sq meters. Plus, despite its high ground, the view from the location was not very impressive due to the sounding houses barricading all four horizons of the lot. 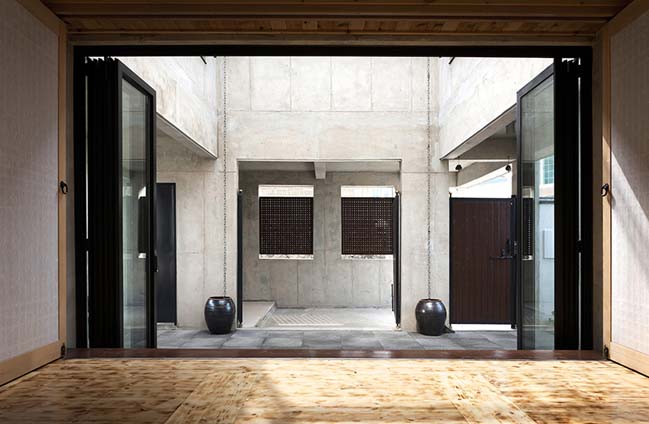 I thought of a house that where the sunlight caresses though and the wind comes in to stay a while. The idea took its form as to vacate the center and to take away the portions of the ground level to provide openings of horizontal access. The design also included a strong outer membrane to make it withhold the powerful salty wind from the ocean and, carried by the same wind, the heavy rainfall that strikes horizontally. 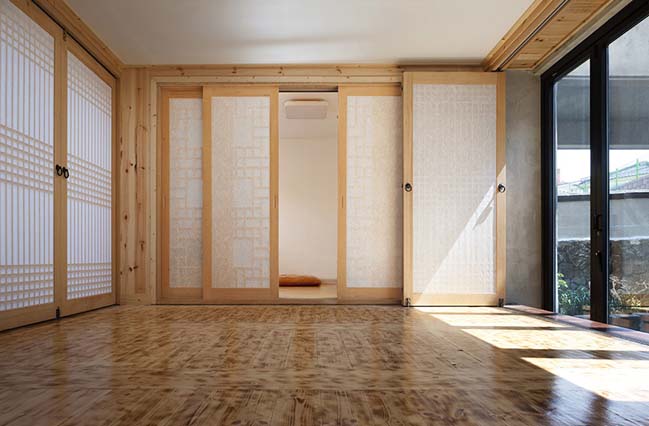 Naturally all the processes passed by my ideas and the scientific varification of the owner. The house was built with concrete and the same concrete was used to complete the finishing surface. Here, the focus was not, so to speak, on the ‘exposed concrete’ but on the way to ‘expose the concrete. 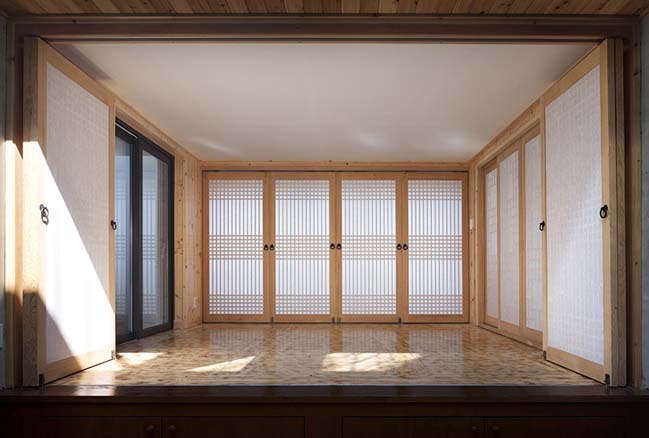 To apply concrete as a finishing product properly, more effort is put on fabricating the mold to make the surface of the concrete more aesthetically pleasing, which generally raises the overall cost. Contrarily, the surface of concrete used for constructional purpose, in other words, ‘what goes inside’, is left rough because it will eventually be covered with other finishes. 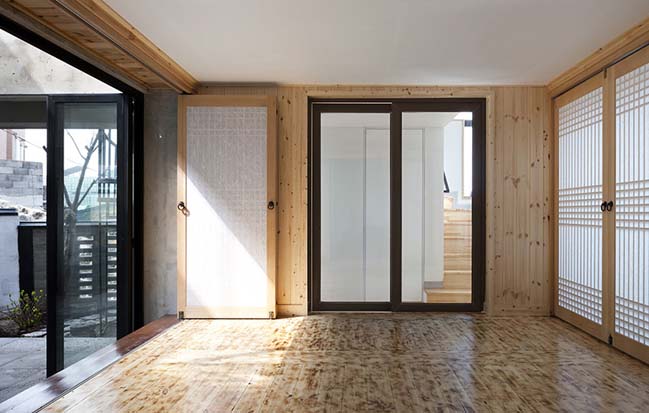 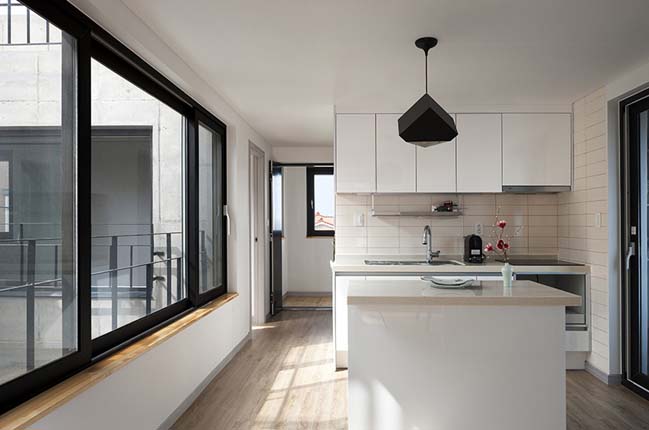 Entering the square courtyard, the sky opens up; then follow the porch, Daechuhng (an outer platform) and Sa-rang (a reception room) arrayed towards the ocean. The East and the West are left open for the wind to run through the courtyard. The membrane is embracing the functional spaces such as the furnace room, and the parking lot. The North-west corner of the house yields the best view of the house, which could be seen while climbing up the staircase leading the way from the porch to the next level. Here, I thought, it would be nice to have this staircase to become a place where one could sit down to ponder upon the great view to be found. 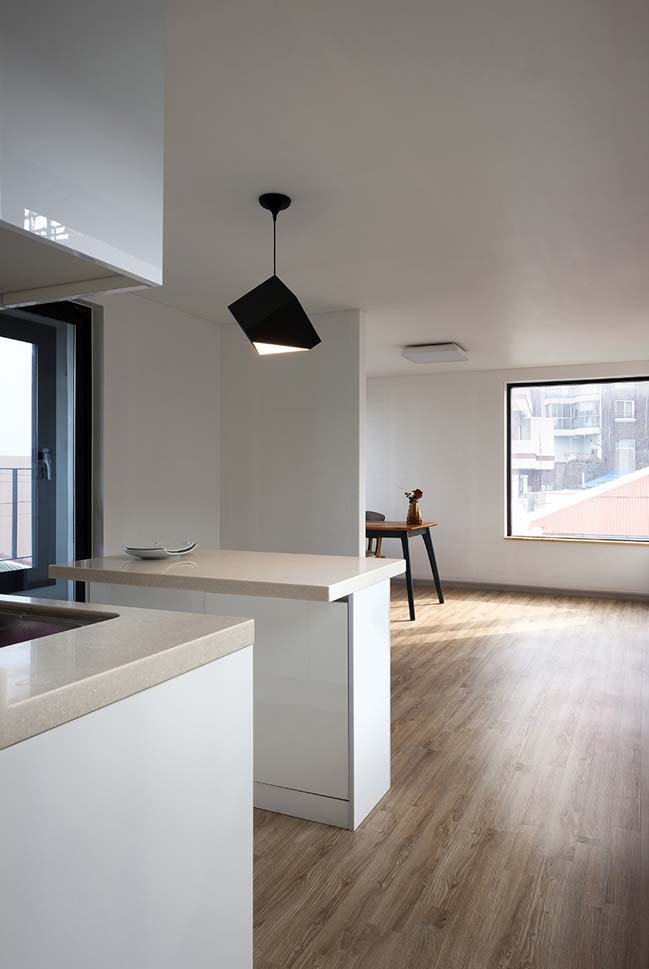 The second floor was designed as a living space consisted of two bedrooms, a living room, a kitchen and a toilet. These rooms were distributed into the North and the West sides of the building and were connected by two bridges. The two bridges were made with different widths to allow multiple perspectives while walking in and out through the space. 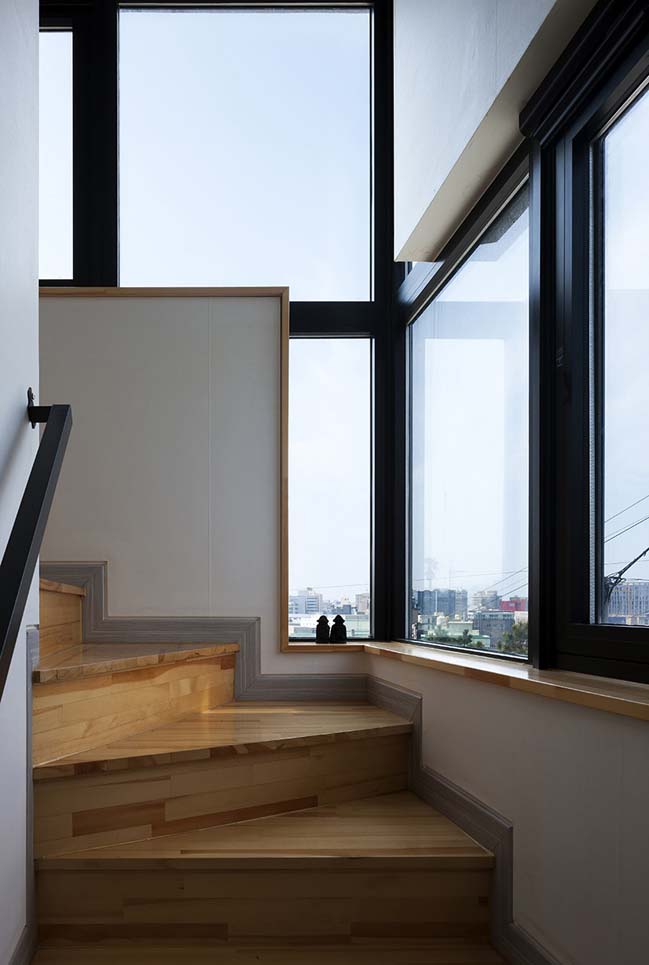 Lastly, one can climb a ladder to access the rooftop which has one small room and a terrace with a closed top. However consequently to the disappearance of the apartment building and the horizon was made possible to be viewed from the second floor, the rooftop was the designed to be the designated spot to have the best view of the surrounding area. Here, standing on the top of the hill, he looks forward to spend the rest of his life alongside the mothering ocean and his family. 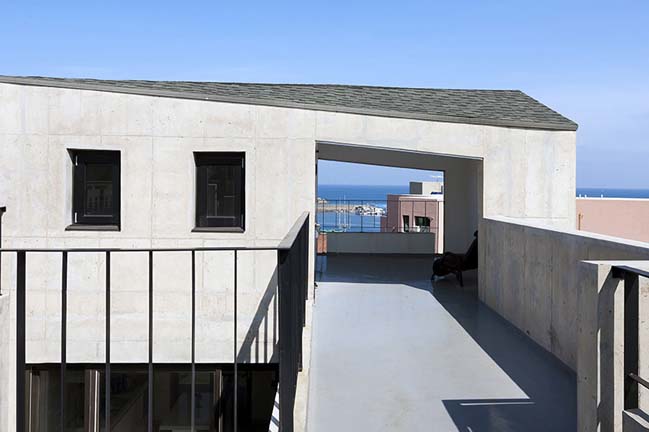 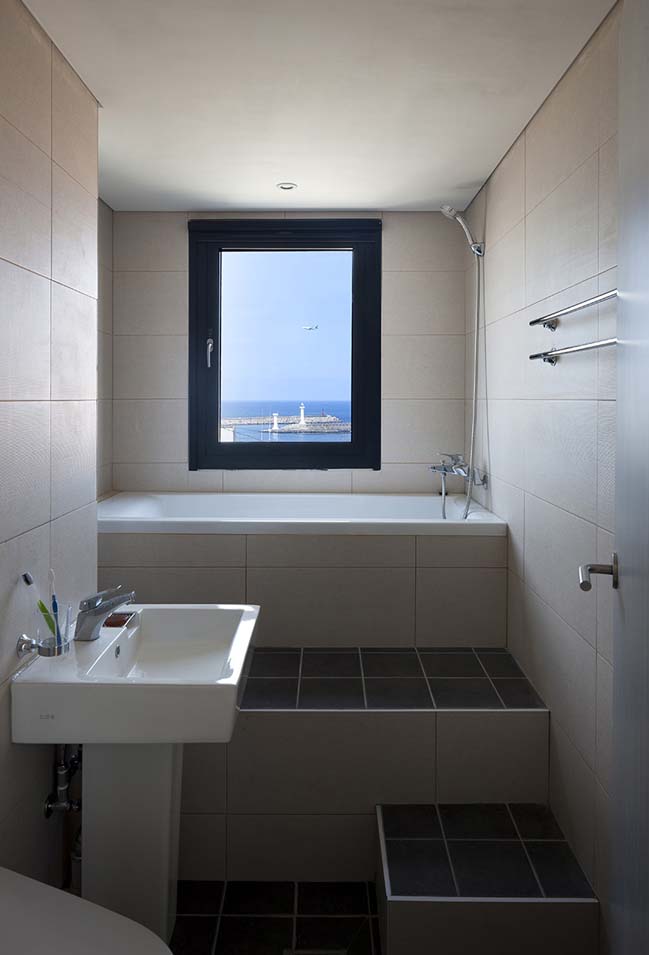 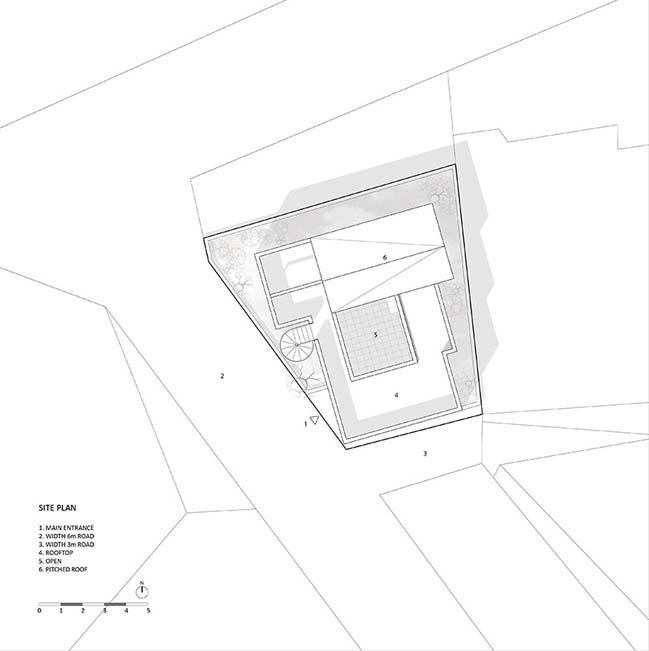 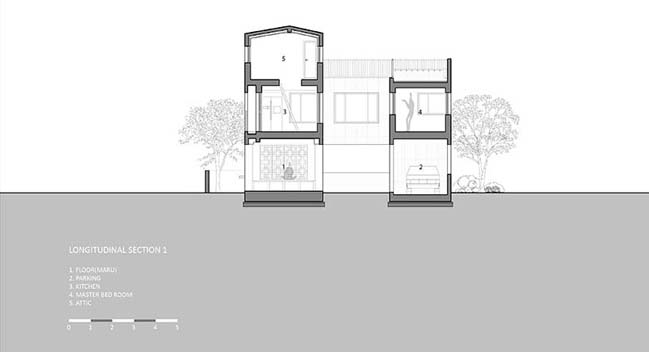 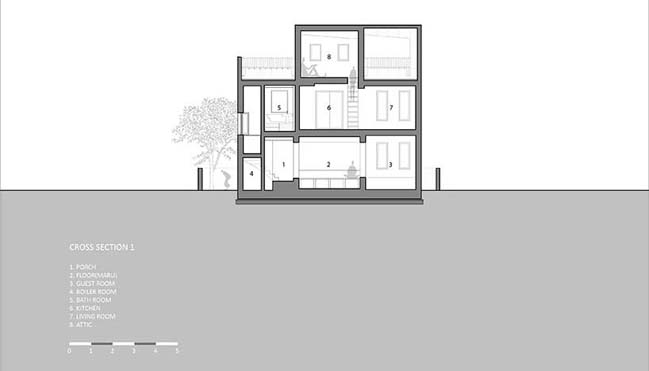 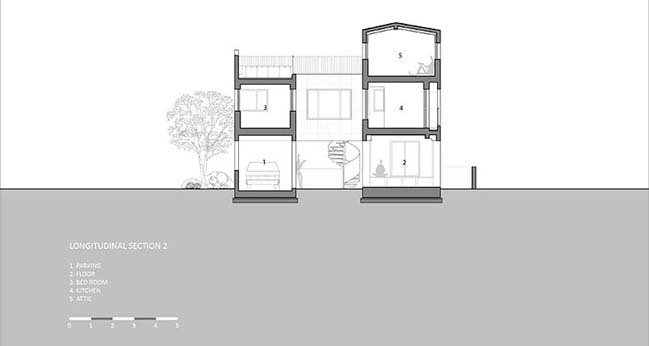 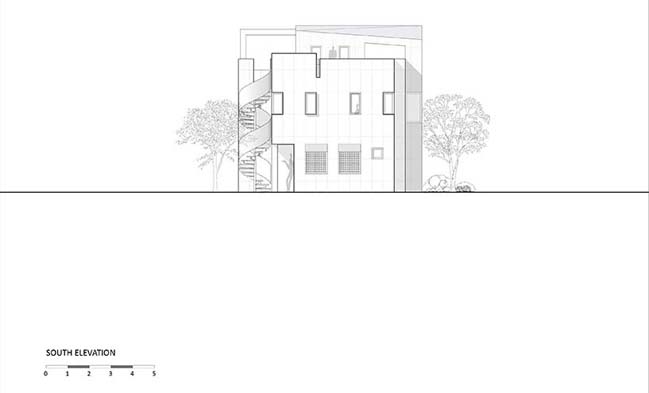 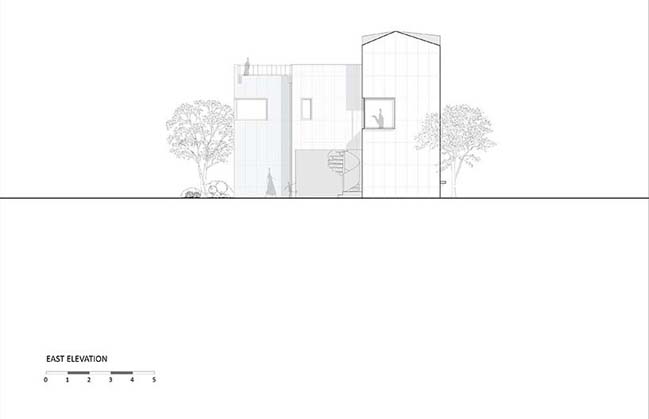 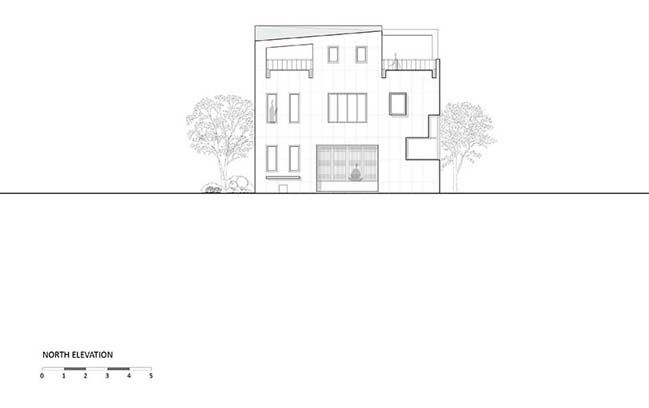 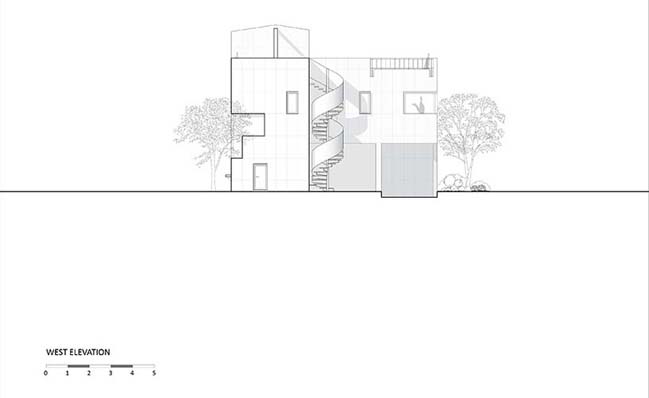 09 / 22 / 2016 This modern concrete house located in an old village on the hill in Jeju Island that the owner gave its name Yoojeongheon - means 'wind stays, sunshine caresses'