With a hybrid purpose of accommodate different uses under a new architectural topography, the Intermodal Station of Logroño is erected in the south of the city (Finalist of FAD awards in its 2012 edition). 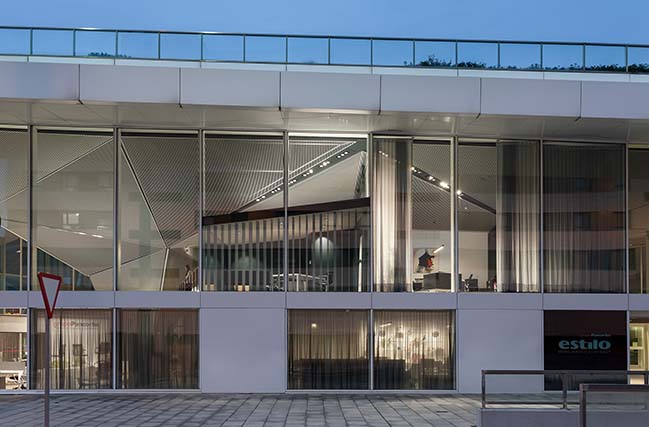 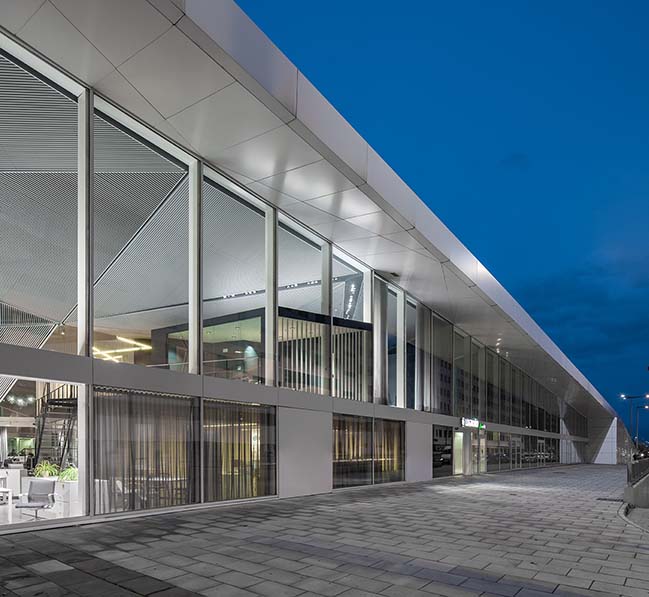 From the architect: We are facing this time a new micro-city -identified as megaform by Kenneth Frampton- that responds to an intense research that Ábalos - Sentkiewicz studio has been developing for years, on the entropy of urban landscaping and the appropriateness of tall buildings. 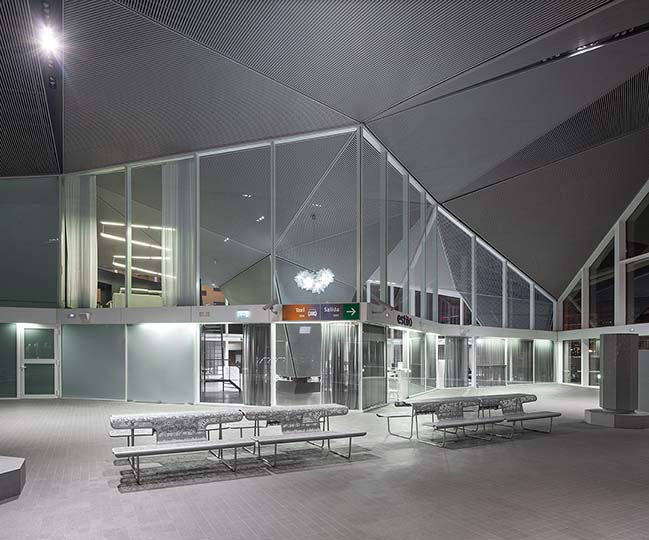 The irruption of this new urban topography is materialized through a large hill-shaped roof that supports a urban garden on its top and shelter all the uses of the program under its underside: train and bus station, parking, cafeteria, retail, garden, etc. 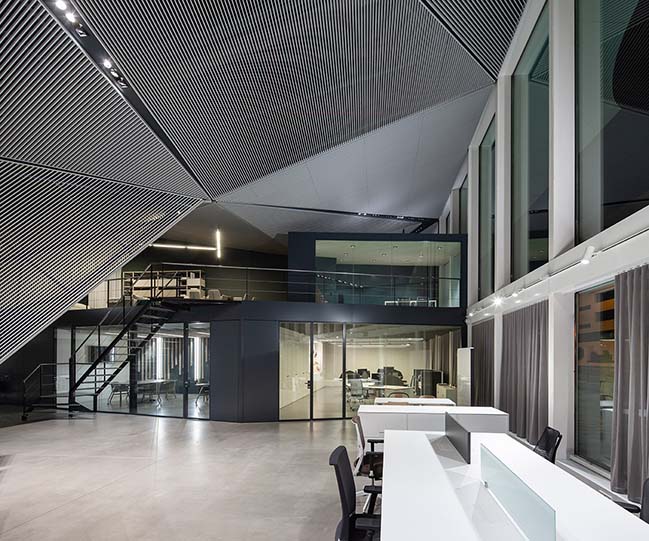 The commission this time was to install a showroom for office and contract furnishing under the cover of this landform building : the undercroft of the massive roofscape modeled through a three-dimensional assembly of triangular aluminum sheet panels, which turns out to be a reflection of the geometrical forms of the garden. A space with no walls or facades, defined only by the floor and a fractal ceiling. 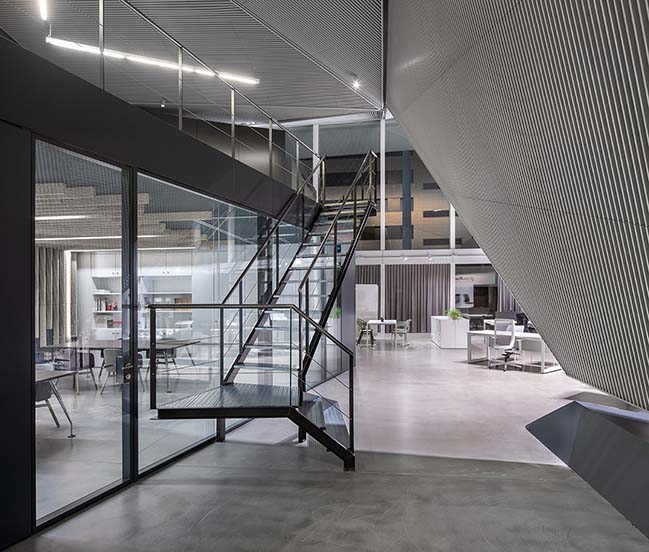 The picturesqueness and the sculptural strength of this new topography, led us irremediably to think about our project looking up. We set out to replicate that reflection between garden and cover, between upper and back side of leaf, repeating it again but this time on the floor. The result is a kind of specular relationship between the showroom and the great green roofscape. 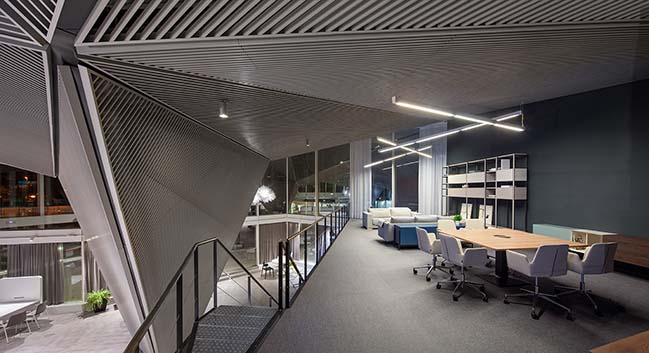 The needs program is developed in two plants. The ground floor contains 400 m² of exhibition, offices, and different spaces whose flexibility allows them to be used as co-working, training rooms or meetings. There is also a catering room that serves as support for events. On the upper floor, there are the chairman offices and an interior terrace that turns its views over the exhibition. It is on this floor where the visitor is offered the experimentation of various sensations; like the tension of feeling close to the fractal ceiling, contemplating from the height the cosmopolitan flow of the people in the Intermodal or shutting oneself up in one of the offices that appropriates the ceiling for itself. 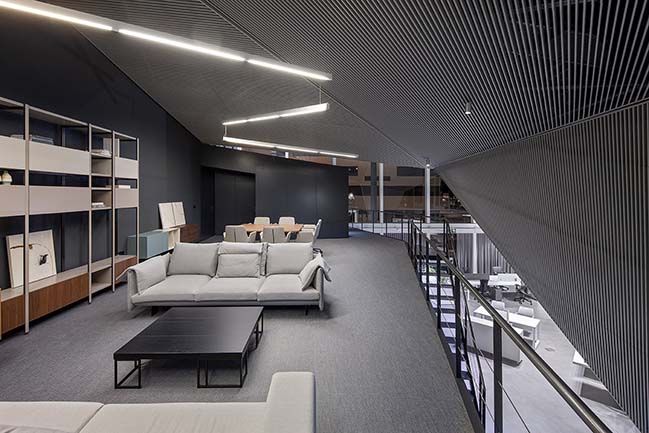 As Stan Allen says, "The nature that is recalled is not so much the biological as geological: the language of caves, quarries, or crystals.[...]" For this reason we immerse ourselves fully in this crystallographic context and in the allusion of this project to the idea of ​​grotto as an element that opens up to the city. It is an operation of architectural surgery: Adopt the language that the megaform proposes, aspiring to make it appear that our showroom was always there. 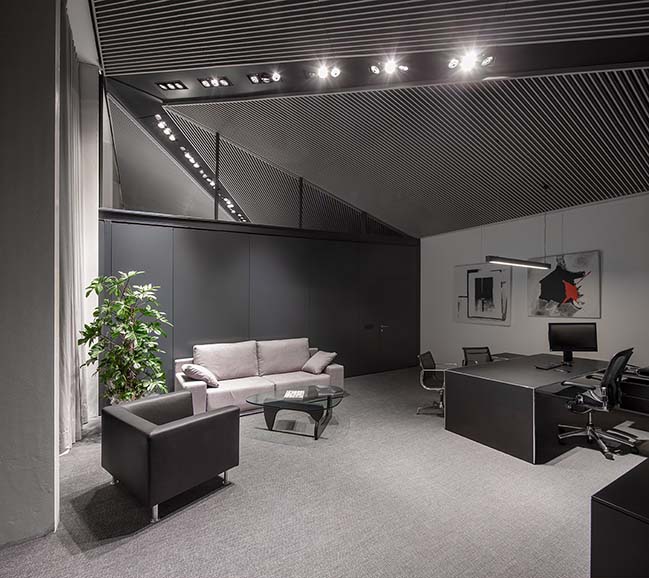 Completed in 2018 by Sergio Rojo Arquitecto . This project involves the revitalization of a small abandoned part of the old town. Architect: Sergio Rojo Arquitecto Location: Marqués de Vallejo, Logroño, Spain Year: 2018 From the architect: It's the rehabilitation of a building located in the neighborhood of the Ollerías Altas y Bajas, an urban area where most of the pottery industry of the city along the Modern Age was.

03 / 21 / 2019 With a hybrid purpose of accommodate different uses under a new architectural topography, the Intermodal Station of Logroño is erected in the south of the city