The BIG + ONE + Sherwood team announce their vision for Southeastern San Francisco is an Islais Hyper-Creek, a restoration of the natural ecosystems centered around a new, riverine park that addresses risk from coastal and storm-water flooding and serves as an opportunity to bring the existing industrial ecosystem into the next economy. 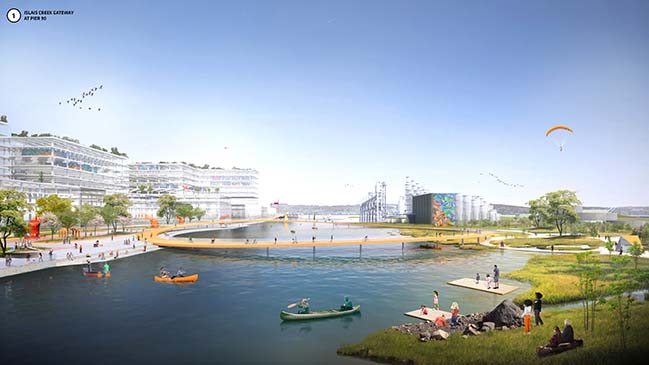 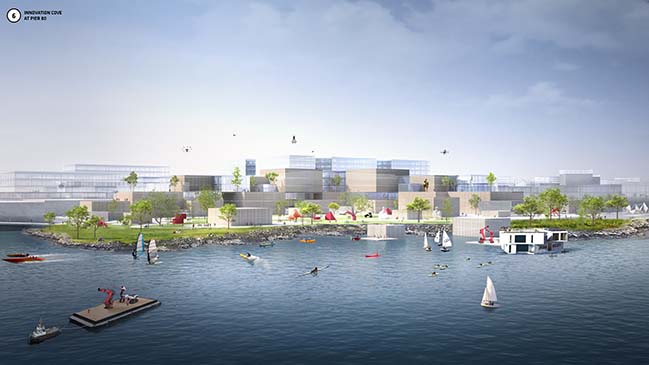 From the architect: Emerging into the Bay at the South-East shoreline of San Francisco, Islais Creek is located at the juncture of many diverse neighborhoods. The area is a nexus for industrial jobs as well as food distribution, art making, craftsmanship, fabrication and more. It sits at an important infrastructural hub, is host to shipping centers, the city’s wholesale produce market, a wastewater treatment plant which treats 80% of San Francisco’s sewage, and many other supporting businesses that provide 22,000 jobs. 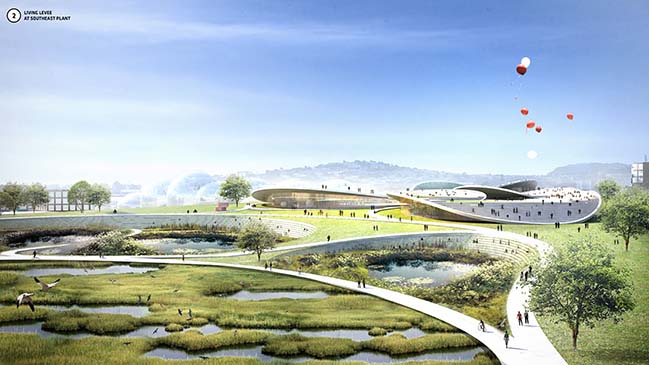 Before modern times, Islais Creek was the area’s largest freshwater body, and it’s main drinking source – with a rich ecology inhabiting it’s sheltered marshlands and mudflats. After the devastating 1906 earthquake, the creek became a dump-site for the city’s mountains of rubble, and previous plans for parkland gave way to a full program of land reclamation, filling in the entire marshland area to the boundaries we know today. Over time pipes replaced the natural flushing of the watershed, with the entirety of the creek placed below ground in a large channel. Today with Climate Change, these systems and the land they occupy are becoming increasingly strained. 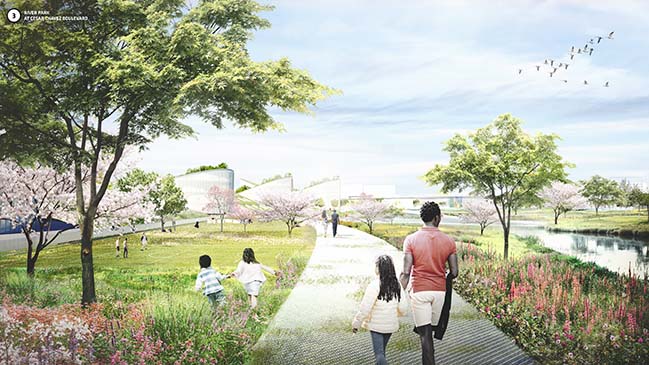 The BIG + ONE + Sherwood team’s vision for Southeastern San Francisco is an Islais Hyper-Creek, a restoration of the natural ecosystems centered around a new, riverine park that addresses risk from coastal and storm-water flooding and serves as an opportunity to bring the existing industrial ecosystem into the next economy. 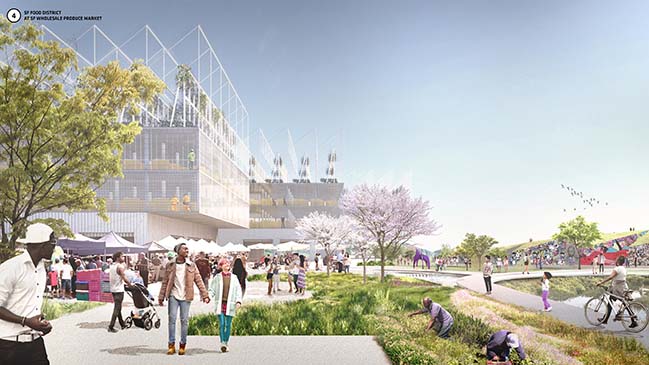 The Islais Hyper-Creek is a holistic, district-wide plan. Existing industrial operations in the surrounding districts are clustered, consolidated and intensified, creating a vital job and logistics hub for the surrounding neighborhoods dependent on its industrial economy. Infrastructure, including logistical and port functions, is strengthened and adapted to be both flood and earthquake-resistant. Weaving together natural, industrial, and social ecosystems, the creek becomes a dense, connective, and accessible area, a resilience model for the entire Bay Area.

In order to jumpstart this process, and to make the outcomes more resilient and adaptive, the BIG + ONE + Sherwood team has formulated the following Pilot Projects:

1. Islais Creek Gateway: At Pier 90, underutilized land can be naturalized into soft shorelines to better handle storm surge, creating a gateway park to Bayview and space for stacked vertical industry and working spaces to kick off a longer-term naturalization of the creek's southern edge.
2. Living Levee: At the Southeast Plant, natural treatment systems can be piloted along the creek, using wetlands to process waste water and tying in to a future decking of the plant itself; this creates space for much-needed recreation, open space and education opportunities.
3. River Park: Along Cesar Chavez Boulevard, existing vehicle yards can be consolidated and stacked in a future district facility, creating space for a daylit creek along its historic path and opportunities for living by the water along its banks.
4. SF Food District: The San Francisco Produce Market will be modernizing in the future. By incorporating additional functions, it can help kick-off the creation of a future food and clean logistics district in the heart of the basin, where production, storage, selling and enjoyment of the area's products come together as a new destination in Bayview.
5. Living with Water: Alemany Farmer's Market sits at a critical pinch point in the creek's flow. Rethinking the site, we can accommodate space for water, doubling as a park, flanked by a new market and space for housing overhead, with adjacent parcels underneath the freeways doubling as parking and water reservoirs.
6. Innovation Cove: At the bay shore, land circling Warm Water Cove can help extend the city's waterfront network into the southeast, providing a platform for a new innovation dock, local business incubators, research facilities and experiments in resilient floating architecture form a hub of innovation for the city. 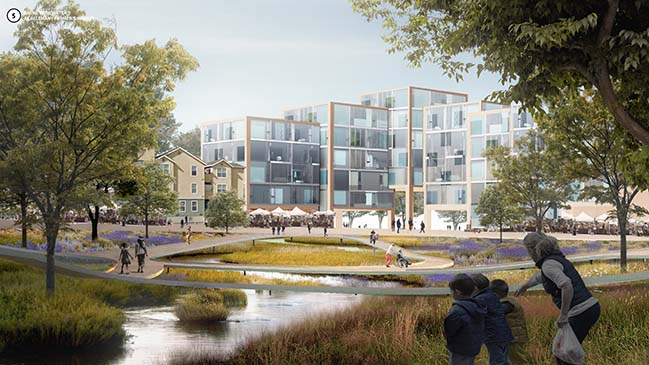 The working group has arrived at these pilots based on their ability to align with various current and planned projects or studies initiated by the City and the Port. This will allow agencies and local organizations to form a planning process around them and be drivers for their future implementation. 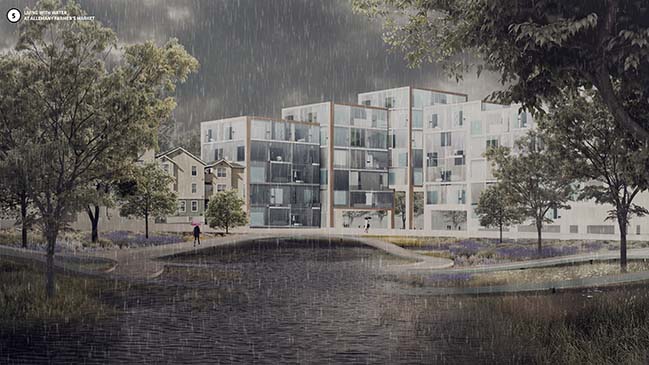 > You may also like: Noma 2.0 - A Restaurant Village Designed by Bjarke Ingels Group 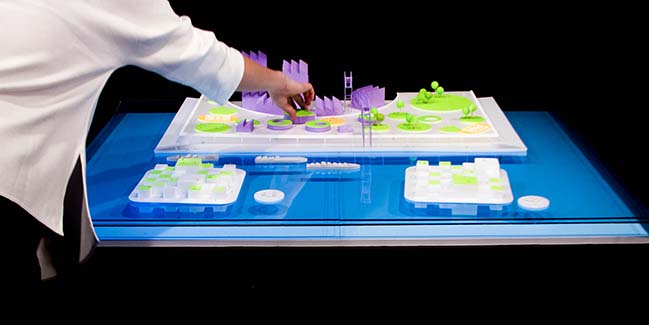 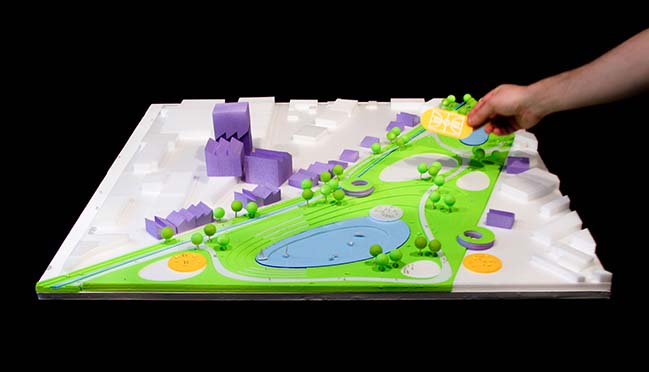 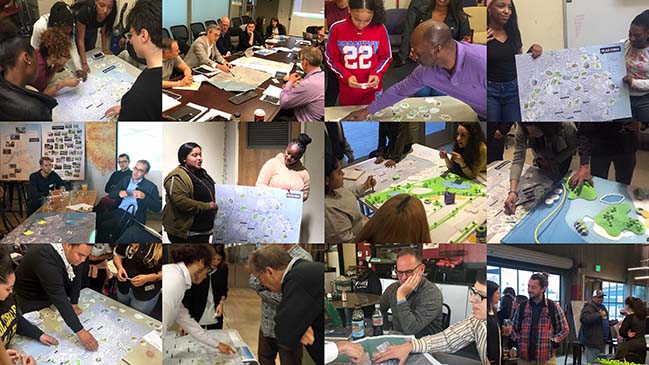 > You may also like: Shenzhen Energy Mansion by Bjarke Ingels Group 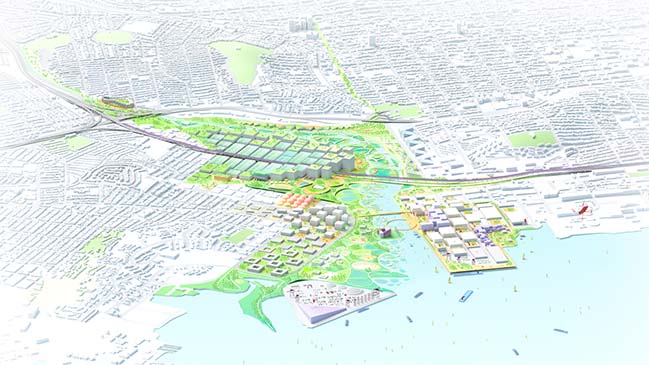 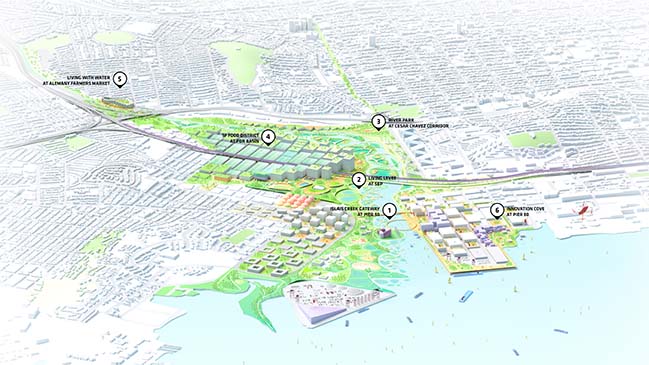 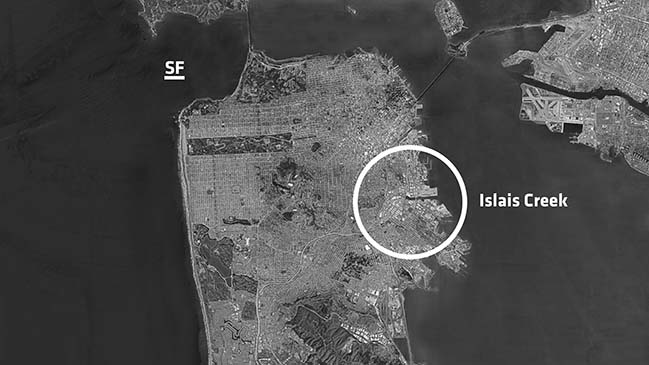 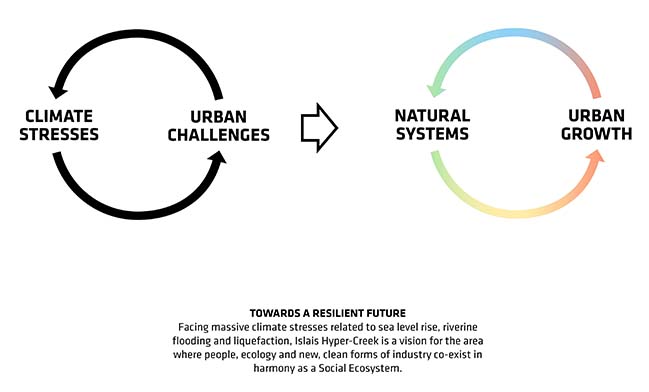 > You may also like: The Lanescraper by Bjarke Ingels Group 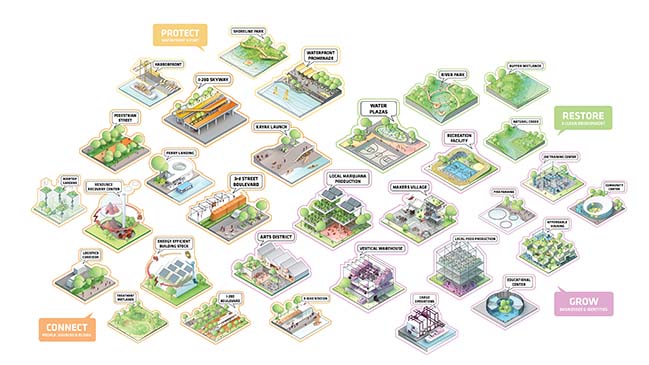 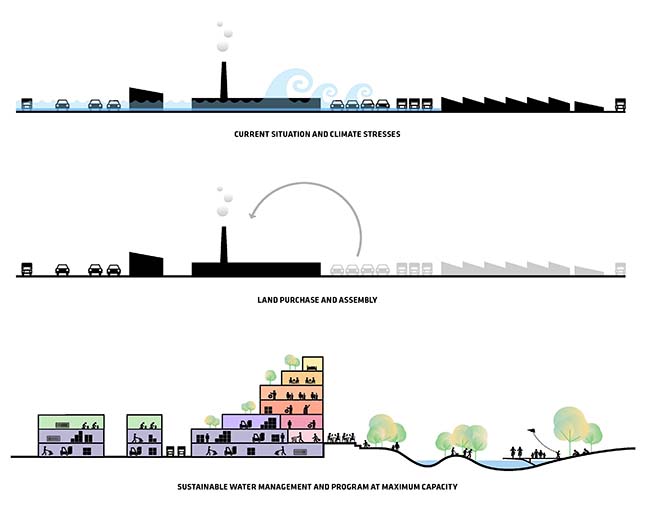 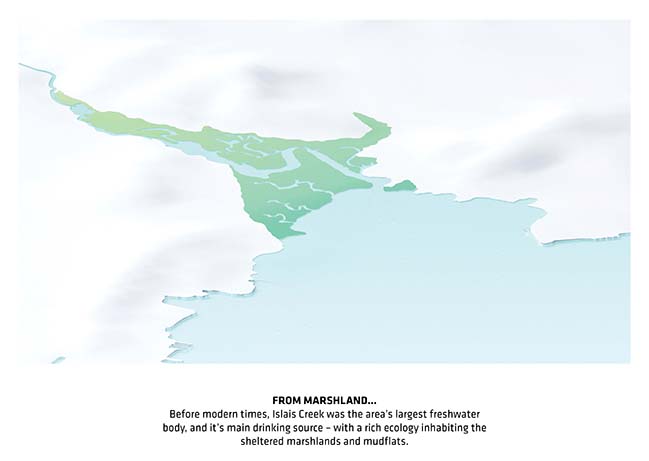 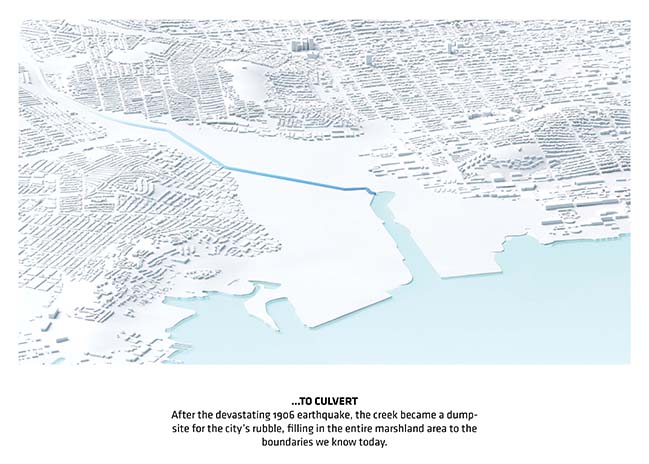 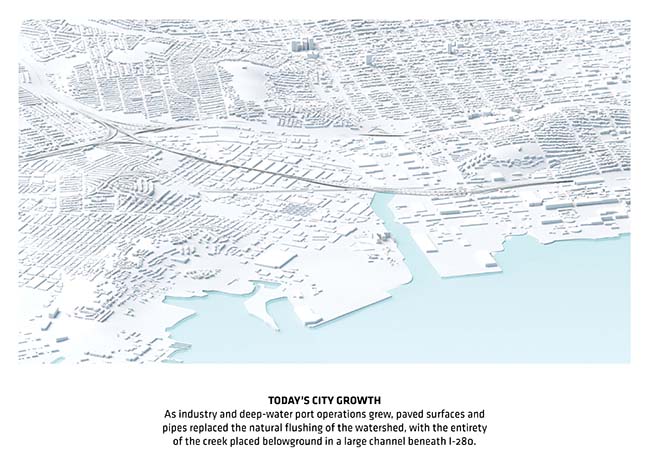 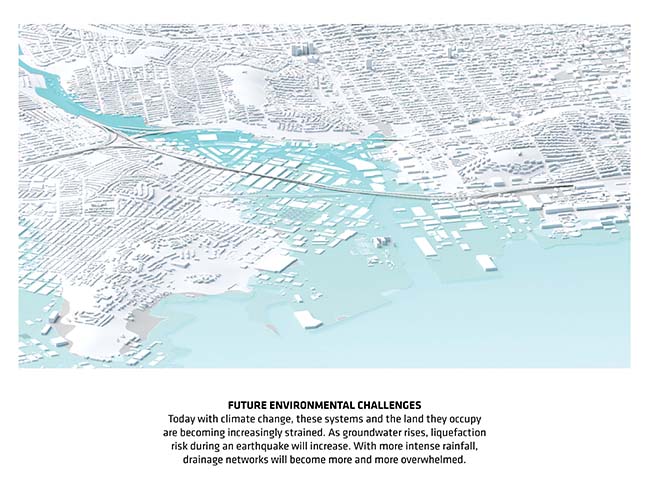 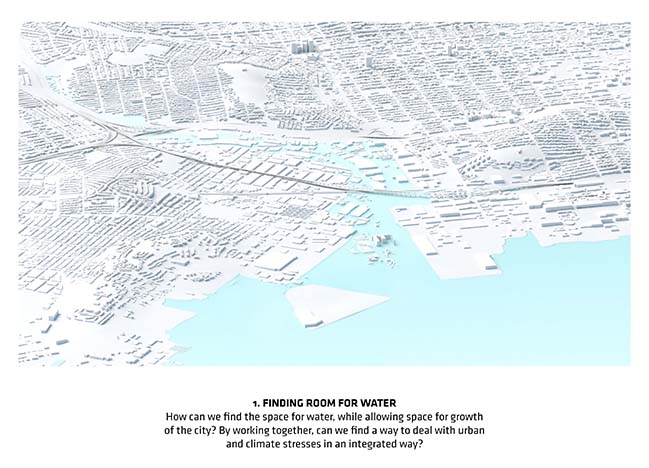 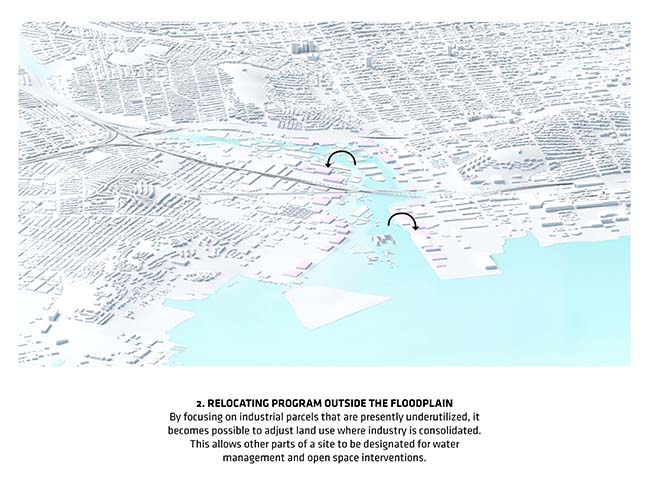 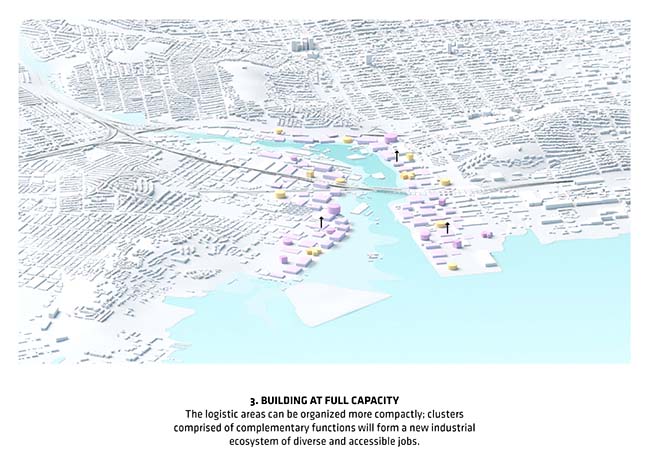 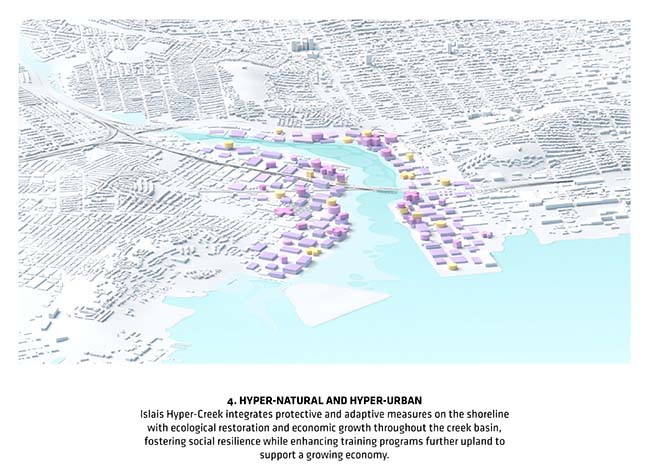 10 / 22 / 2018 The BIG + ONE + Sherwood team announce their vision for Southeastern San Francisco is an Islais Hyper-Creek, a restoration of the natural ecosystems... 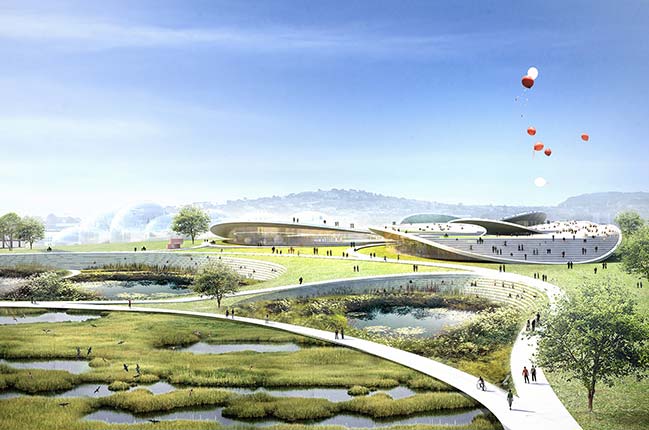