As one of the most popular websites providing tourism services in China, Mafengwo advocates freedom and exploration of the unknown. On the occasion of its upcoming 10th anniversary, a decision has been made to terminate the team's long-term scattered form of office works, thus improving its cohesion leapingly and eliminating the strangeness among internal teams engaged in different business sectors. The design task of its brand new global headquarters has been assigned to SYN Architects. 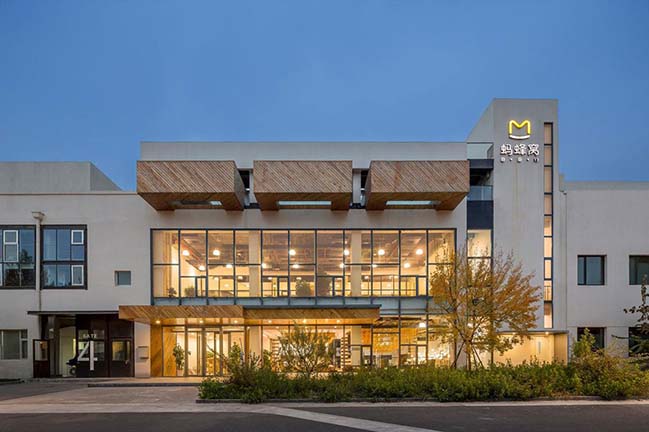 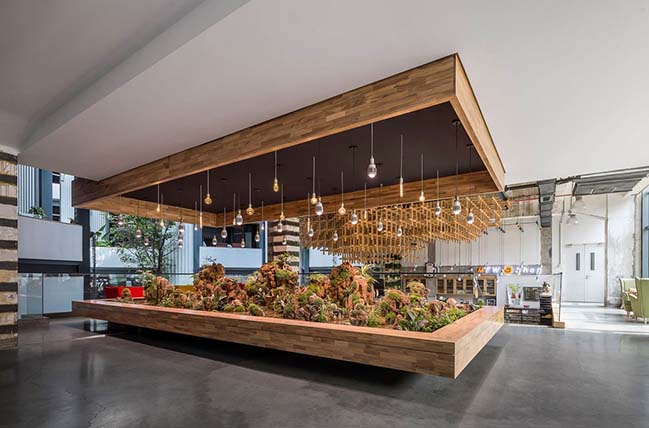 From the architect: "When the IP Era is ushered in, brands pay more attention to their personalized performances than before, while enterprises show more care for employees' office space and their identities of, enthusiasm for and emotion cultivation related to corporate cultures. We have created a unique space for Mafengwo, which will be enjoyed by its employees as if they're working in the best office ever in the world. " - Zou Yingxi, Principle Architect of SYN Architects. 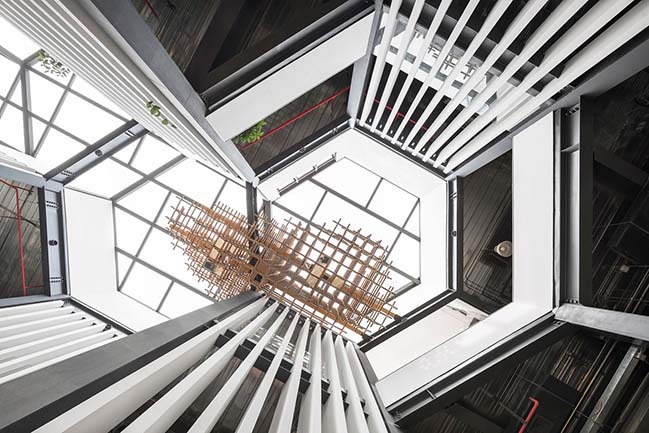 Project Location - Phase I of the project is located within the Universal Industrial Park, Jiuxianqiao, Chaoyang District, Beijing. Adjacent to Beijing Airport Highway and 798 Arts District, the cultural creativity landmark in Beijing, the project occupies about 2,000m2, with its construction area of over 5,000m2. The Universal Industrial Park was transformed from a factory manufacturing kinescopes in the 1980s, and the office space (design area: 1,800m2) of Mafengwo's (brand name of a tourism website) global headquarters is located in one section (width: nearly 30m) of an old two-and-a-half-story workshop (depth: 80m; length: 200m) within this Park. Seen from the architecture's historical course and context, the designer has retained large amounts of original information on the materials and times of architecture, based on which the architecture has been in coherence with Mafengwo's culture and spirits via the reinterpretation of interior space. 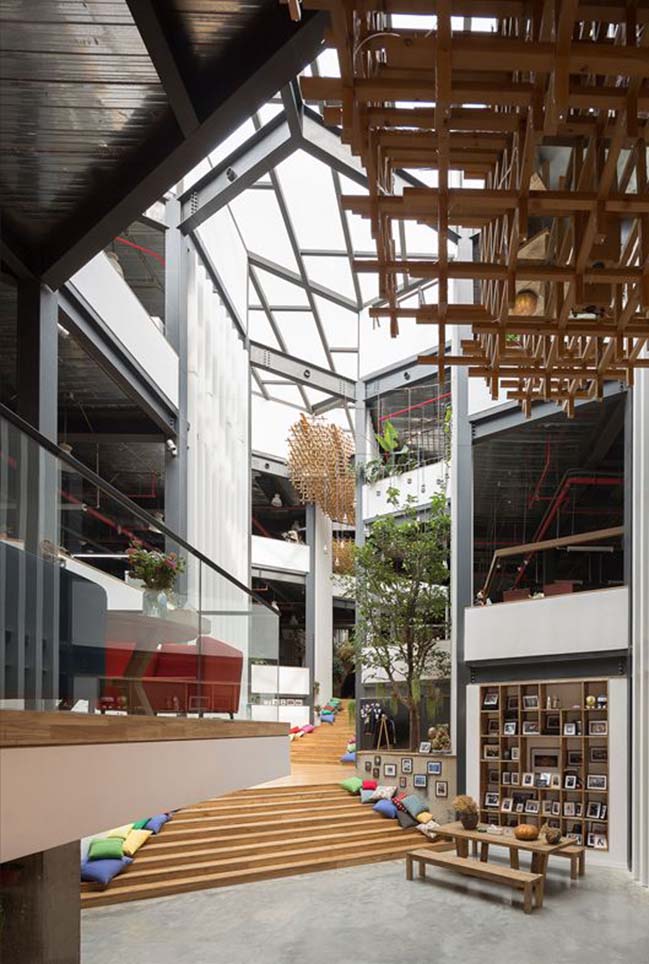 "It is a container encouraging users themselves to give a full play to their imaginations constantly for recreating such a space, and my job is only to create this space", Zou Yingxi the Architect said for this project, stressing that designs should allow the interpretation of freedom with all might and main. 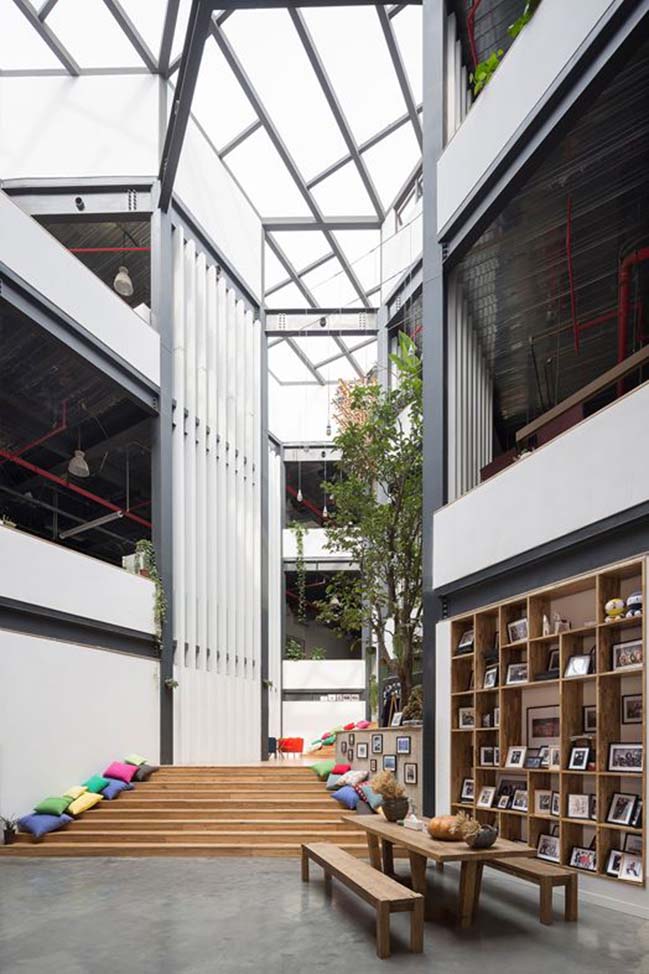 Firstly, the entire area and story height have been adjusted by digging downwards for 4m, without changing the ground level. Meanwhile, a hexagon symbolizing the honeycomb has been extracted and taken as a core element of creativity, with hexagonal lattices fully covering the whole plane space (80*30m). Then, a truss (height: 3m) previously running through the workshop (200m) has been cut off in vertical structure to form a see-through and complete space structured by the hexagonal relation. 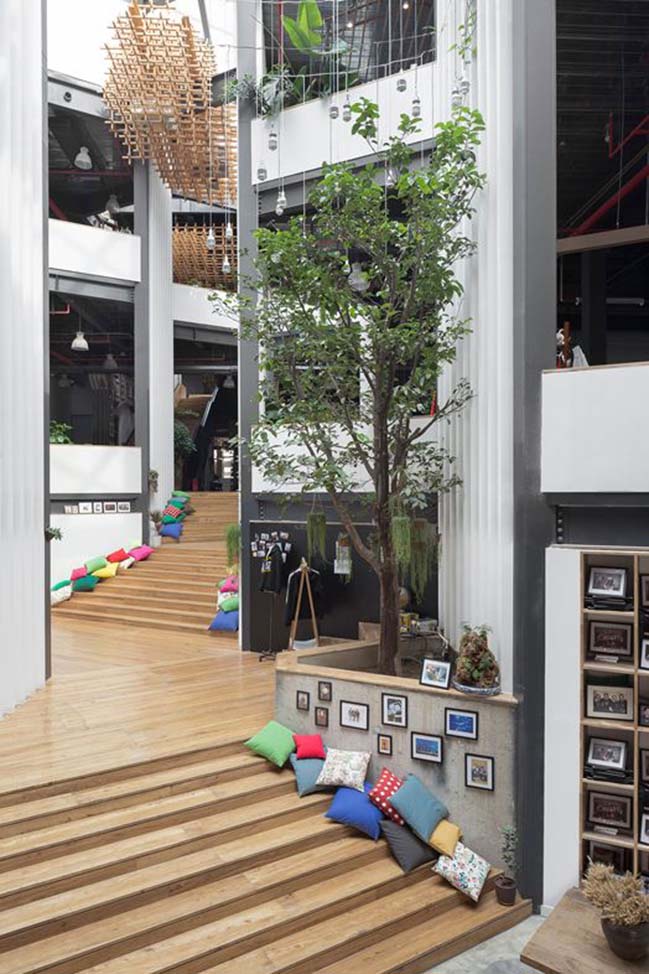 Next, the entire structural layout of each floor has been cut along the hexagon, with a glass-roof lighting atrium formed (height: nearly 25m from the very bottom up to the roof) in the middle to ingeniously break through the architecture's interior and exterior spaces, and a steel frame has been arranged on the top to show up the hexagon, thus guaranteeing sufficient spatial capacity and also creating rich structures. In this way, both order and freedom have been gained. 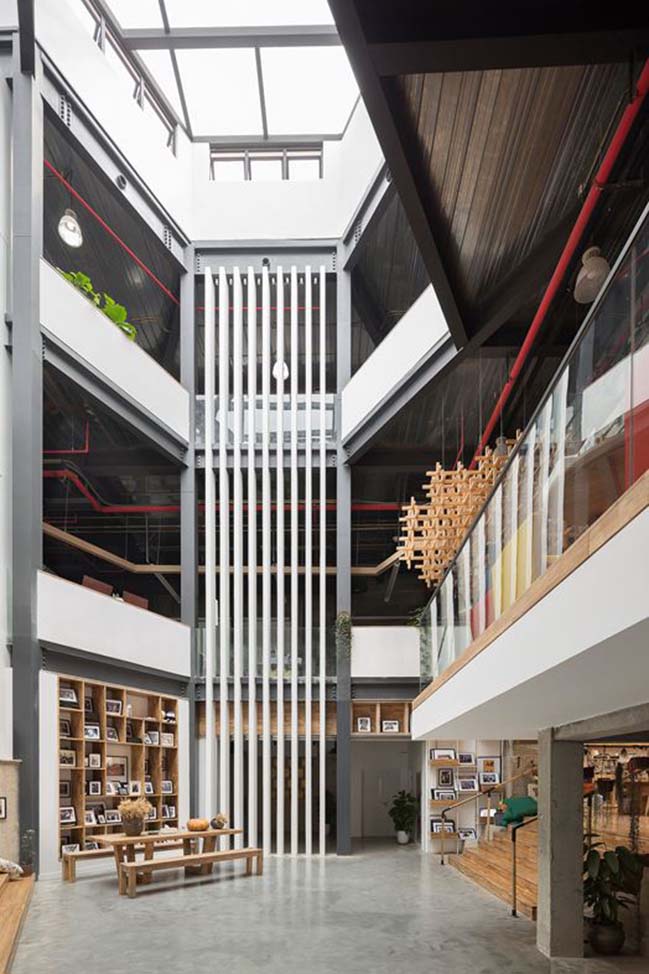 Circulation Design Feature - The creative traffic system of "Scissors Ladder" connecting each floor is another bold idea for this project. Interconnection among spaces and interrelation among persons can be effectuated by the high-rise grand staircase straightly leading to the roof. The building's front door heads towards the south, with its entrance arranged on the 1st Floor, and one needs to, after entering this building, pass a cafe bar on the lower half storey and go downwards for another half storey before he/she can really enter Mafengwo's interior from the employee leisure area. The said leisure area is equipped with fitness room, catering area, photo studio, sleeping pods, and nursery and so on, which also leads to the long ladder in the south. Scissors Ladder's other end starts and stretches upwards from the inner passage for logistics & employees on the 1st Floor in the building's north. 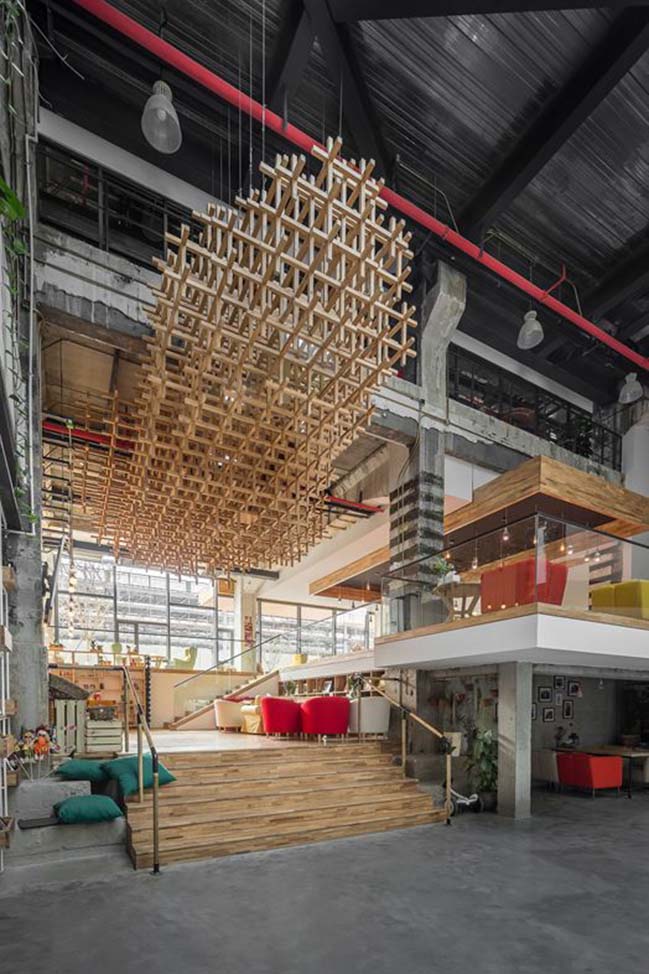 Lines have also been distributed along the honeycomb's hexagon to let such honeycomb structure stand out of the plane and show up in a vertical space. Two staircases are zigzagged by different floors and diverted by the honeycomb's multiple edges within the plane on each floor. They converge and open frequently, interlacing and intersecting in the air to produce independent, interconnected and unblocked correlations at all directions. Spatial arrangement has been adopted deliberately to break boundaries, to eliminate barriers among the user's sectors, and to facilitate communication, coordination and interaction smoothly. 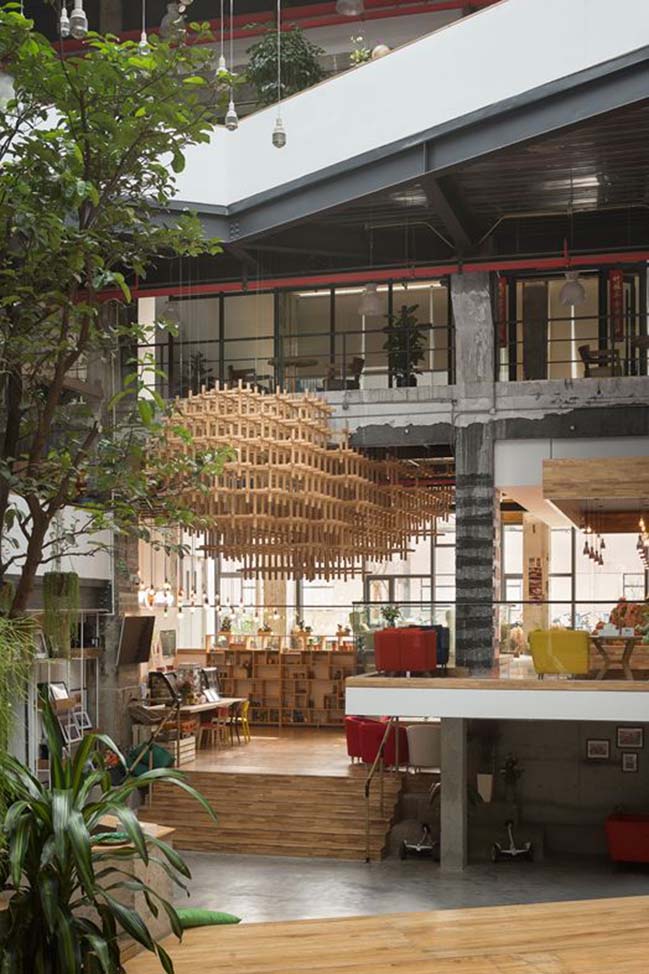 Design Concept - What Mafengwo provides to all of its users is a kind of free choice for tourism, while the embodiment of such cultural spirit is also a key point in the architect's design. In this office area, space is thoroughly liberated, and the designer has reduced its internal arrangements to the largest extent. Newly added floor slabs and handrails have been purely whited, while the transparent fireproof coating has been applied on all the old/new steel beams for once merely; as for the meeting room, no ornaments have been provided, leaving a room for the user to give free play to his/her creativity. To endow more room for the growth of architectural imagination, the architect has specially shrunk the size of a reception desk located in the front door's entrance, and also designed a gigantic "Four Seasons" parterre defined as a device allowing interactions between the space and user. 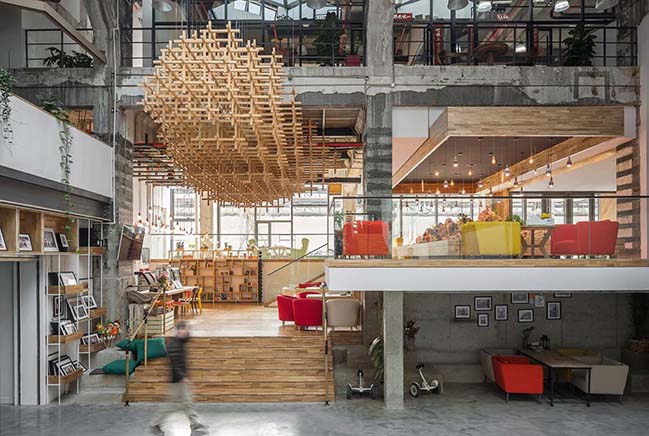 Corresponding plants and layouts are totally decided by Mafengwo employees based on their ideas and emotions. Views in the parterre vary from four seasons, ranging from the seeding & harvest of crops to the flowering & reaping of lotus roots in a lotus pond. Apart from a demonstration of spatial flexibility, this also fully mobilizes the creative passion and energy of those within such space. 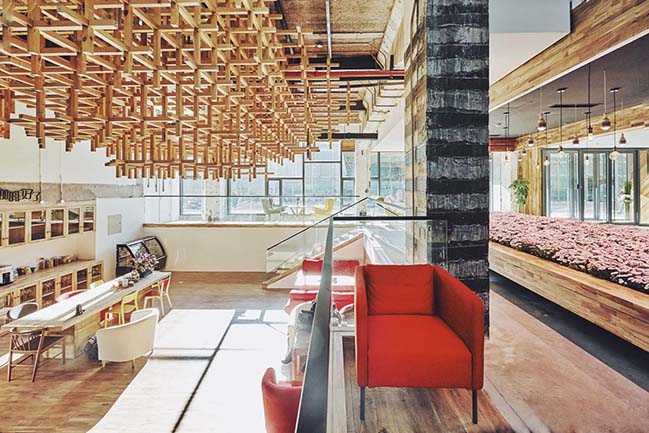 Artistic installation - "Honeycomb Cloud" - After finishing the design of this entire space, the architect also leaves a present in addition to the freedom. "I recognized the necessity to add something, not just a simple ornament or lamp. Finally, I selected a special cloud-shaped installation. Its cloud-like outline is structured by battens, in which optical fibers are inlet to glow at a core luminous source, then such glow is led to the endpoints of each batten, with a faintly luminous cloud formed. This creative idea derives from the imagination of Internet companies and cloud computing, and the cloud floating in the air can affect this space", said by Zou Yingxi. He has arranged four "Honeycomb Clouds" in this space, respectively right above the leisure area (at the southern entrance), by the honeycomb ceiling's beam and right above the northern staircase. They both enrich the spatial imagination and become a highlight within this space. 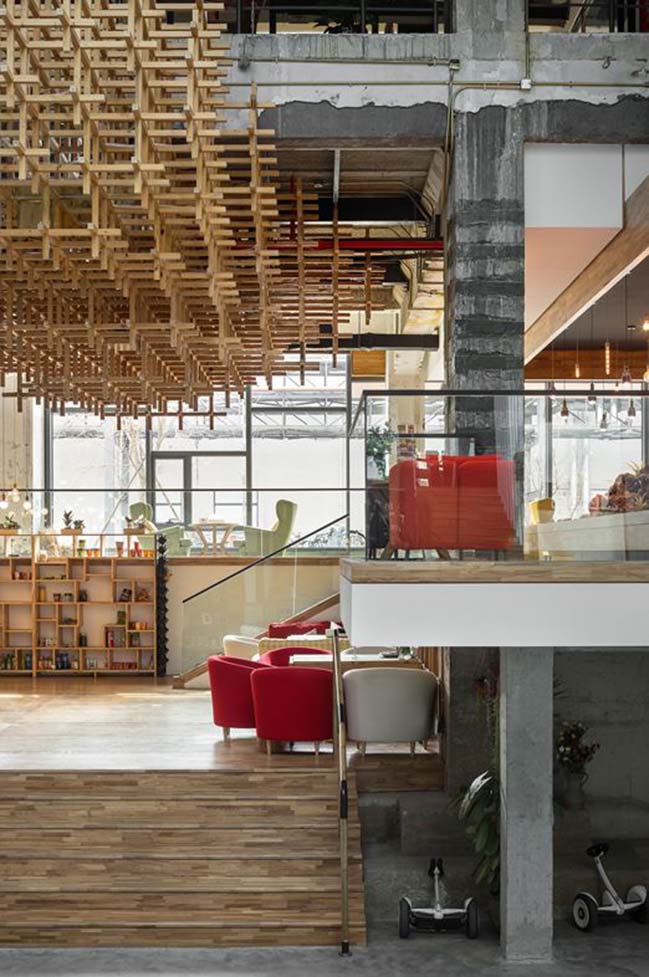 Conclusion - Completion of the Phase I Project of Mafengwo's headquarters not only provides the enterprise with ideal spatial experiences and boosts the employees' happiness level, but also raises brand awareness. In terms of the designer, SYN Architects and Mafengwo have built trust in mutual understanding and appreciation, endowing the project with connotations of more confidence, freedom and happiness. 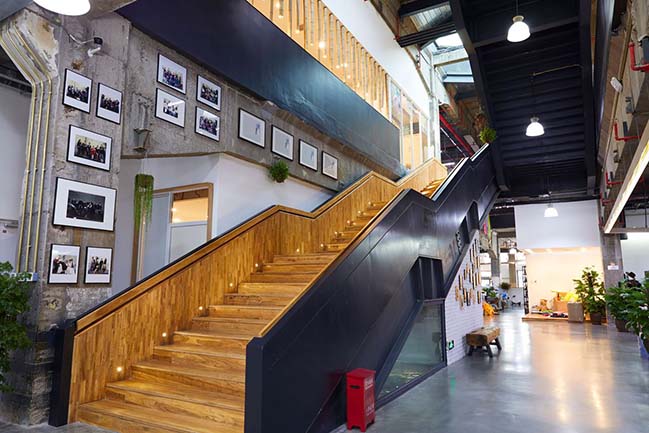 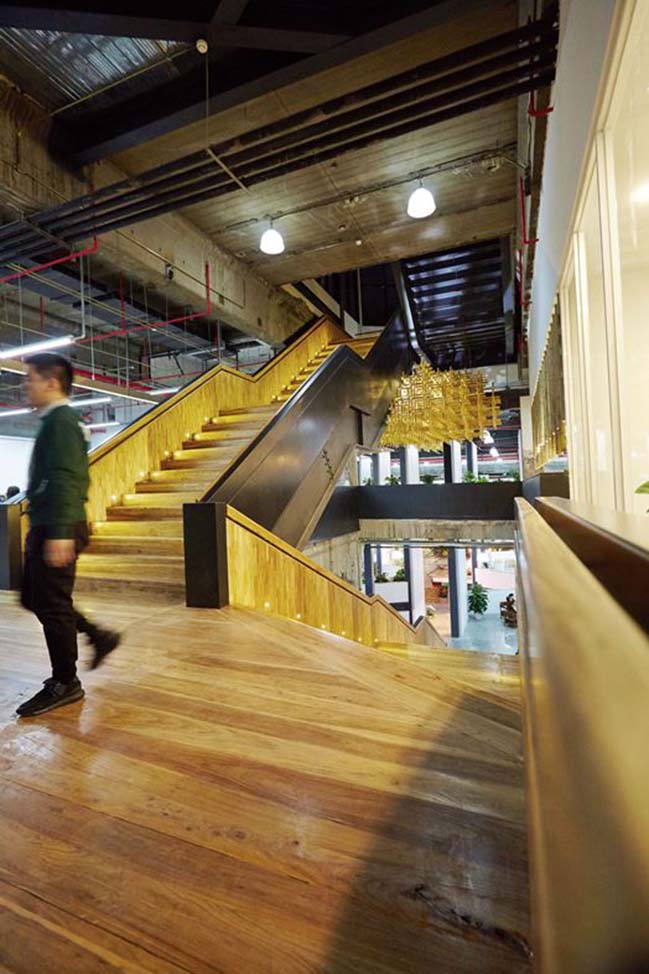 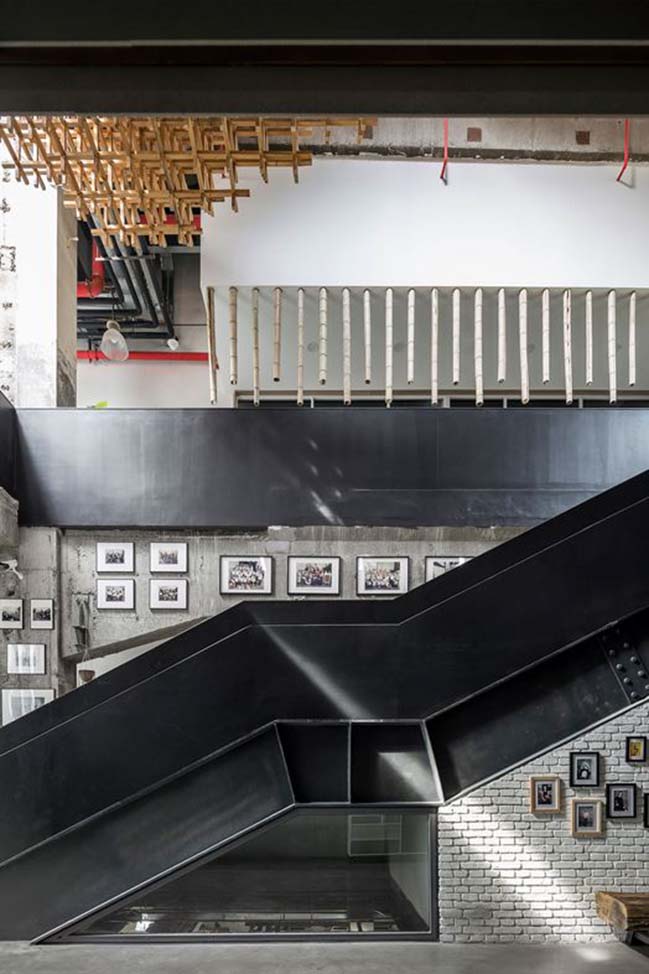 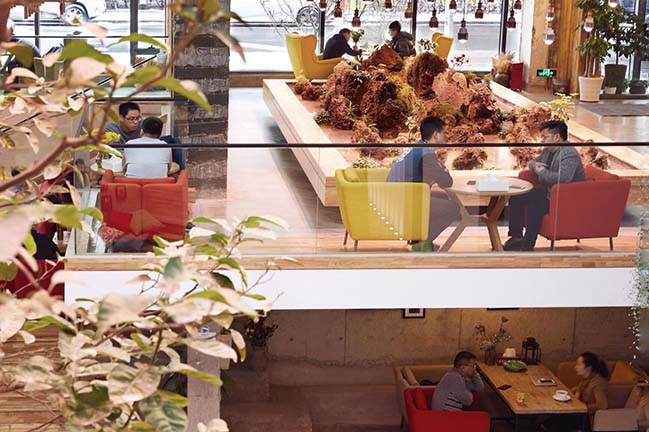 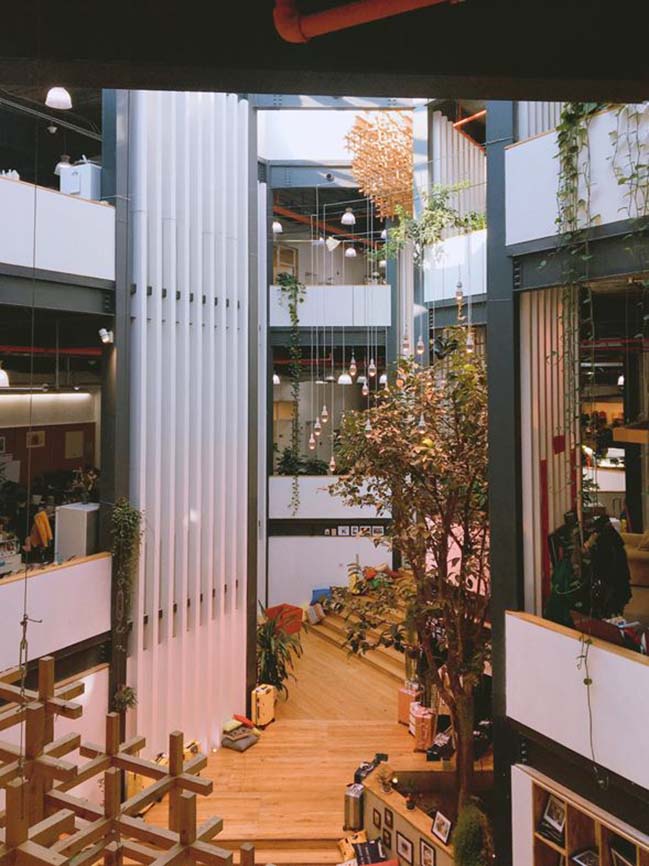 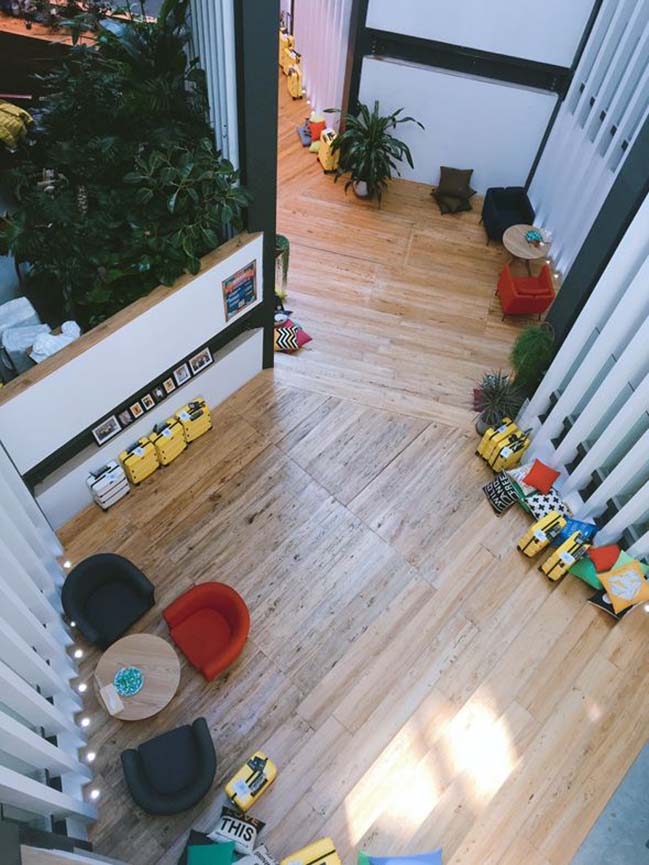 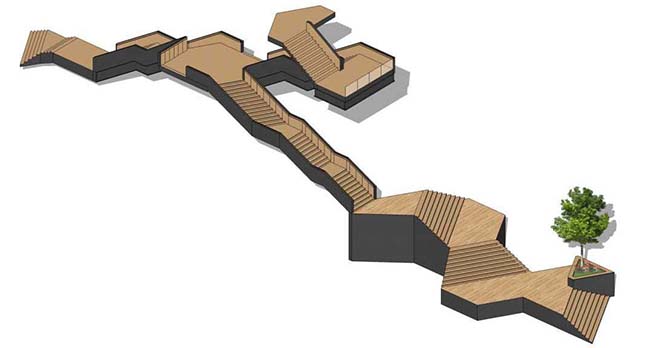 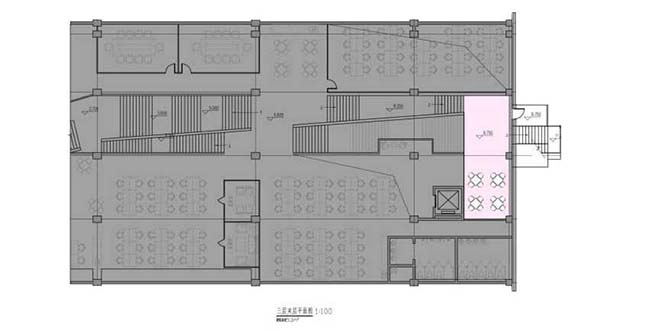 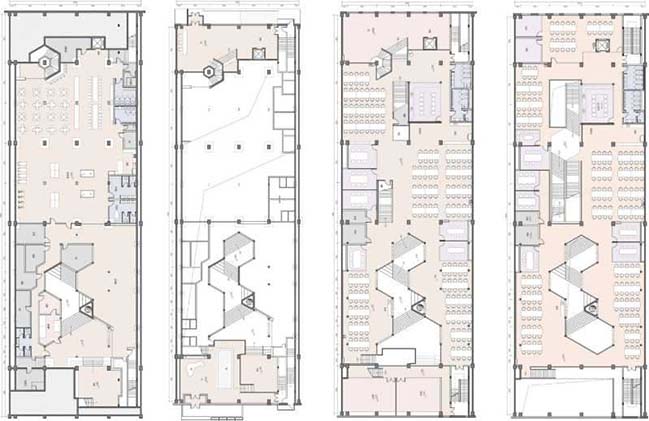 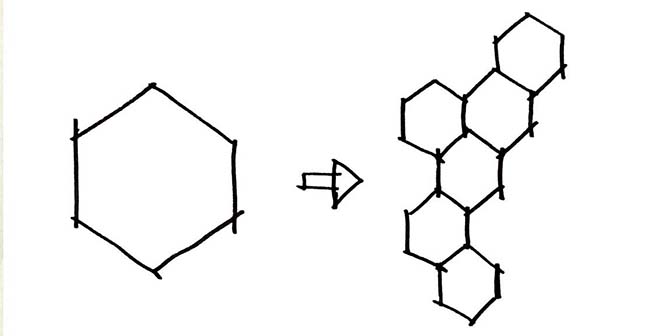 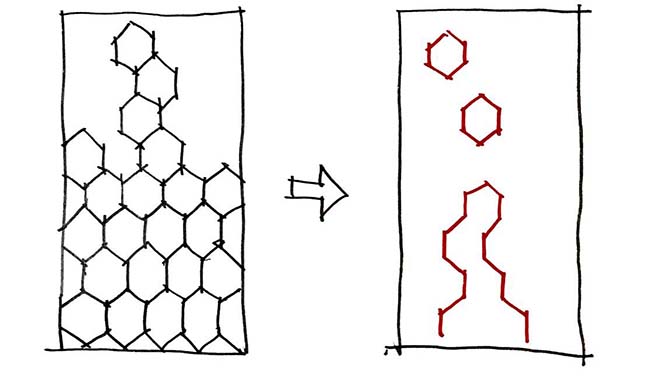 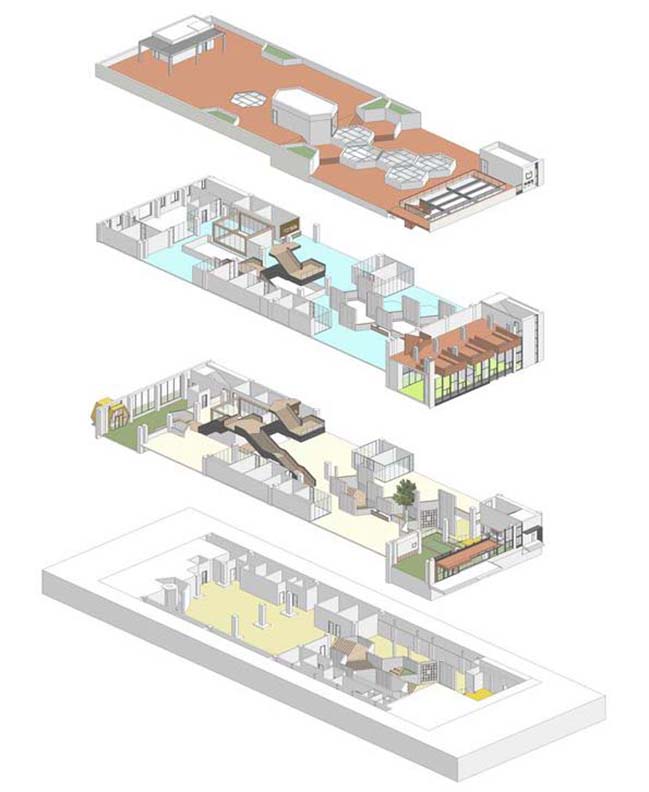 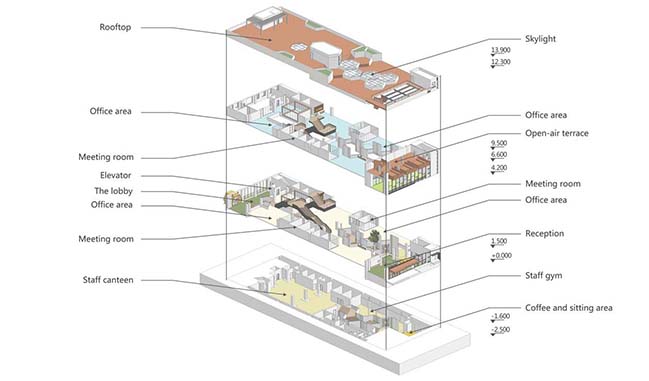 04 / 19 / 2018 SYN Architects have created a unique space for Mafengwo, which will be enjoyed by its employees as if they're working in the best office ever in the world