Sant’Antonio Musicale it is an interesting urban project that Matteo Cainer Architecture designed for the Municipality of Trieste... 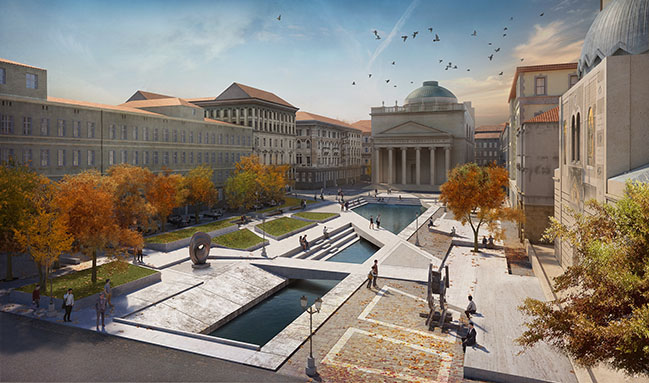 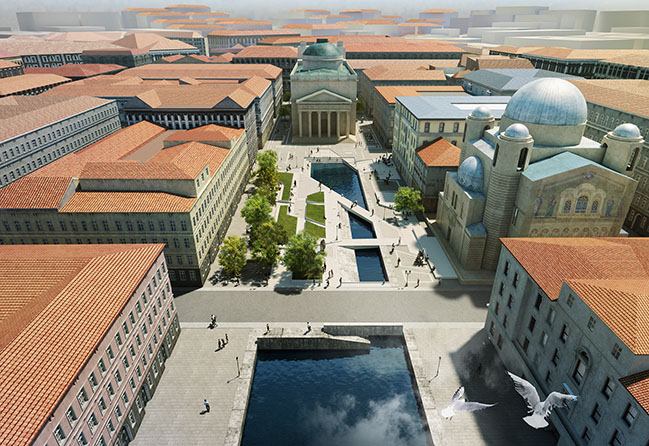 From the architect: Our proposal for Sant’Antonio square will restore the historical and poetic pathos of the place. With the transformation of the site into a graceful urban space for sharing different experiences and enjoying day to day life, citizens will gain a new awareness of the city and the sea. Through multiple experiences, from strolling in the footsteps of Italo Svevo, relaxing in the shade of the trees with James Joyce, enjoying the sun on the lawns or simply sitting on the steps next to the sea listening to the wind play the urban violins, they will feel a renewed harmony with the surrounding environment. 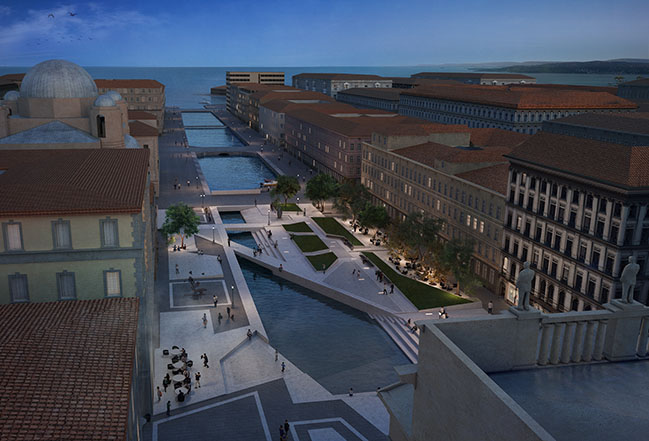 With its powerful literary legacy, Trieste embodies a true ‘Mitteleuropean’ zeitgeist, one which celebrates multi-cultural diversity. As a result, our proposal is rich and multi-layered but at the same time rigorous and elegantly austere. The project not only invites visitors to take part in new cultural exchanges, but also to contemplate the natural elements: the sun with its shadows, the sea with its tides and the wind with its gusts, all of which are defining characteristics of the city. 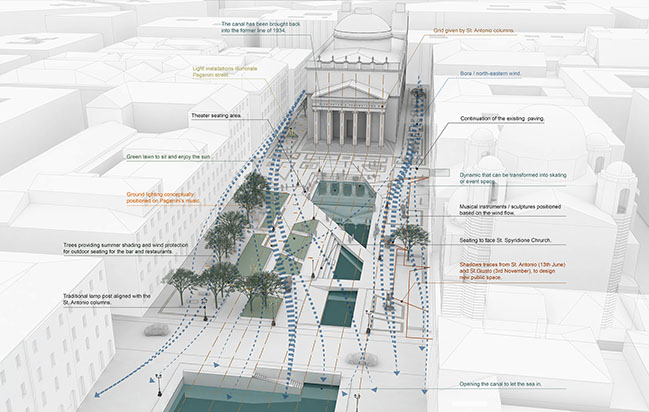 Our ambition is to design an urban space capable of awakening memories and emotions, one that can unify the sea, the wealth of architecture that frames the square, and the complex, layered and at times ambiguous history of the city. It was therefore vital to us that this important pedestrian space be designed to merge nature, sea and architecture, while remaining simple and subtle, permeable and flexible; a new urban environment with a rich sense of place. 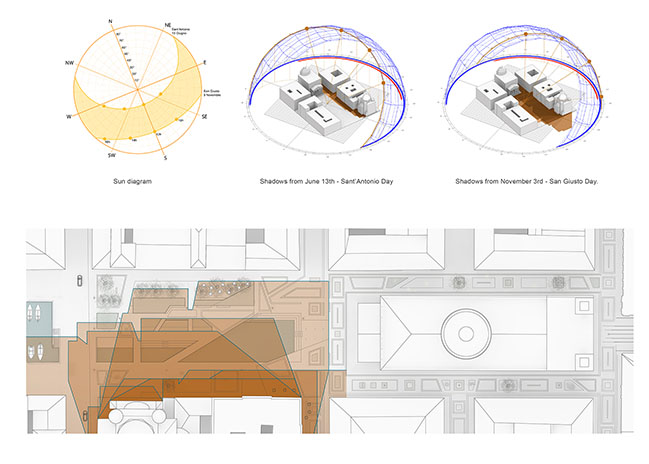 The resulting project is one that embodies various key themes: the first is bringing the sea deep inside the city, right up to the church, restoring the elegant basin of water. This will not only reflect its surroundings, but more importantly encourage a new synergy with the sea, through a multifunctional gathering space that responds to the tides. The piazza will mutate from a place for enjoying the sun and sea, to one capable of hosting cultural events. Surrounded by steps, the basin can be temporarily transformed into an amphitheatre for musical events or in winter into a small enclosed skating ring. Secondly, the project dialogues with the sun and its shadows; the latter have been used to design the morphology of the project and the hierarchy of the spaces. Public areas are designed based on the shadow lines that fall from the surrounding buildings on the day of Sant’Antonio – June 13th and that of San Giusto, patron saint of the city – November 3rd. This new topography of hard and soft landscape will not only create new meeting spaces but will also change the square's appearance over the course of the year: coloured blossoms in spring; green hues in summer; swathes of red, yellow and orange in the autumn. 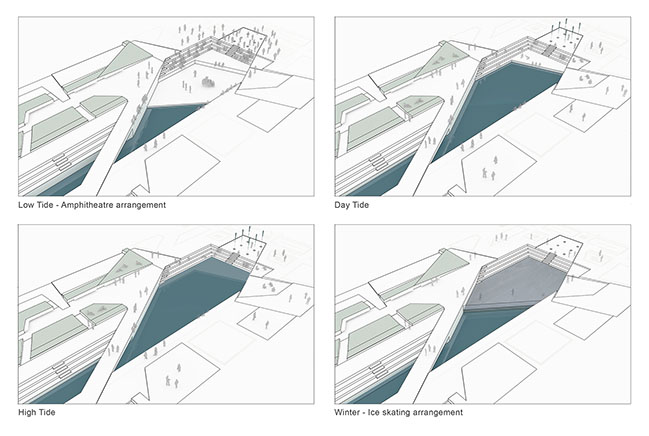 The third key element is to enhance and exploit the trajectories and gusts of the typical Trieste wind ‘La Bora’, not only to identify specific vegetation which can shelter/protect visitors, but also to effectively generate music. From Rossini to Bellini, from Paganini to Ponchielli, all these are street names that embrace the site and have fostered the desire to bring music into the project. As a result, a series of wind instruments that also act as urban sculptural forms within the square have been strategically placed to be played both by the ‘Bora’ and the public. Furthermore, a new lighting scheme has been conceptually designed based on Paganini’s music; this manifests itself both through light installations, ground lighting and city lights, transforming the daytime shadows into light. This will also give the square a strong identity and appear to extend the space of the piazza into the surrounding city fabric, encouraging and supporting an active cultural night life. 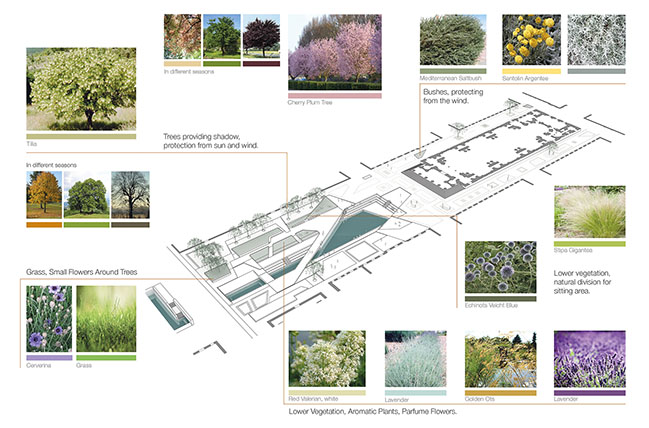 The combination of all these elements – natural, conceptual and topographical, creates a unique dynamic and classical urban space; one that in its multiplicity is capable of offering a new agency of change at urban, civic and social levels. It will project the city and its citizens towards a more vibrant and dynamic future, one of renewed awareness with nature and its elements. Grand yet austere, this new musical piazza will become a lively and memorable space for the City of Trieste. 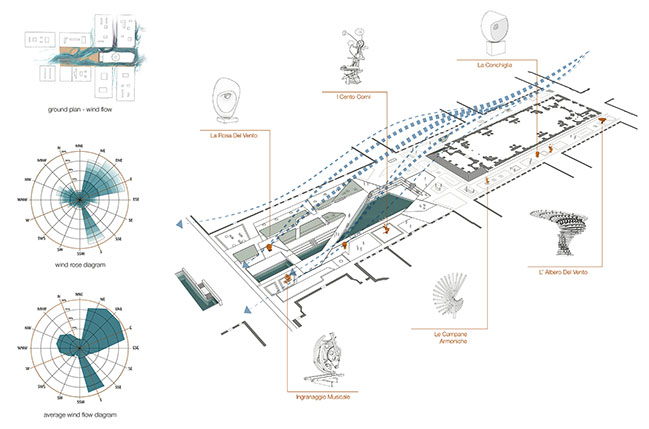 YOU MAY ALSO LIKE: Transcendence 3.0 by Matteo Cainer Architecture 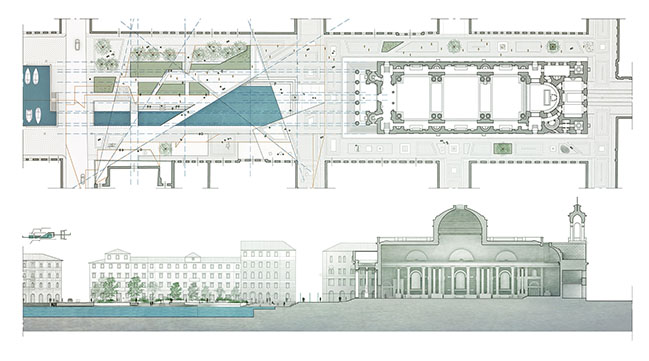 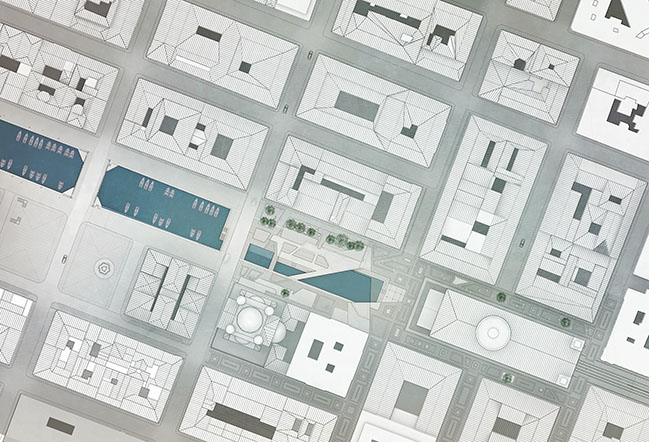 01 / 04 / 2020 Sant'Antonio Musicale it is an interesting urban project that Matteo Cainer Architecture designed for the Municipality of Trieste...

Monastery of the Sister of St. Francis by PORT