New Spaces for Desjardins at the Montréal Tower by Provencher_Roy

In summer 2018, Desjardins Movement’s online services' spaces will move to the Montréal Tower. The premises, vacant since 1987, are currently being transformed into office space. The interior design follows the architectural work carried out by Provencher_Roy. 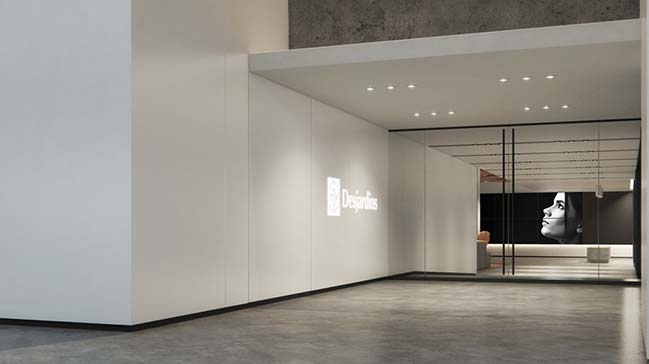 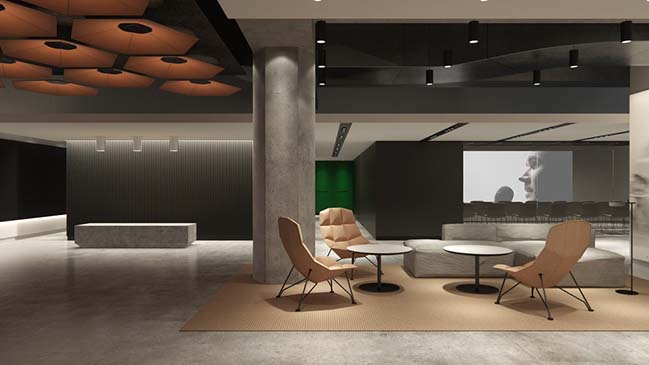 From the architect: Desjardins will be the first tenant and has a 15-year lease. Its call centres and administrative offices will take up seven of the tower’s 12 storeys, or 80% of the rental space available at this iconic site. During the work undertaken in 2015 to refurbish and renovate the tower, which had been planned well in advance by the Olympic Park administration, Provencher_Roy replaced the existing prefabricated concrete envelope with a curtain wall for more abundant transparency and fenestration, thereby augmenting the presence of natural light within while respecting the original architecture. 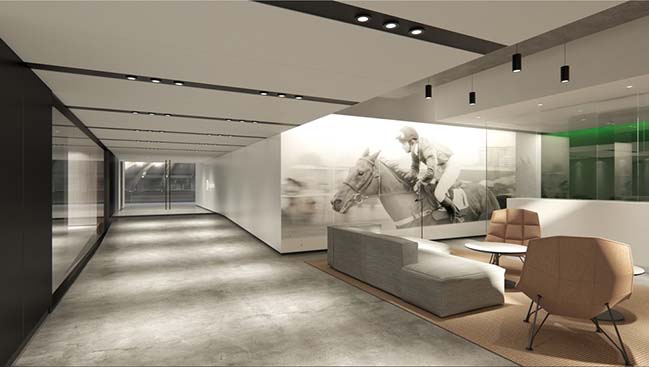 A massive bringing up to standards
The Montréal Tower has undergone a makeover in order to better suit its new corporate vocation. Designed by architect Roger Taillibert, the original tower employed prefab concrete panels pierced with vertical strips of windows to provide the zenithal lighting suitable for its initial use. The tower had to be adapted for use by a large number of workers, as it had been initially designed to host sports associations. 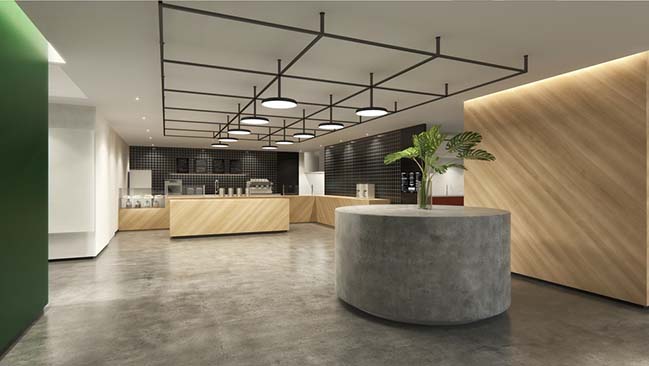 The thousand employees who will move in will enjoy modern work spaces, bathed in natural light. To achieve this result, however, almost all of the Montréal Tower’s mechanical systems had to be renovated to bring them up to code and standards. However, the biggest challenge was undoubtedly the stripping of the tower’s prefabricated concrete panels to make way for the transparency afforded by a glass curtain wall covering 60% of the facade—an essential element in creating a pleasant work environment. In addition to revealing the spectacular structure of this architectural icon, this approach imparts to the tower a new vitality. “After its 30 years of concealed existence, we are now finally unveiling to the whole world the structure of the Montréal Tower!” says Anik Mandalian, project manager and partner architect at Provencher_Roy. 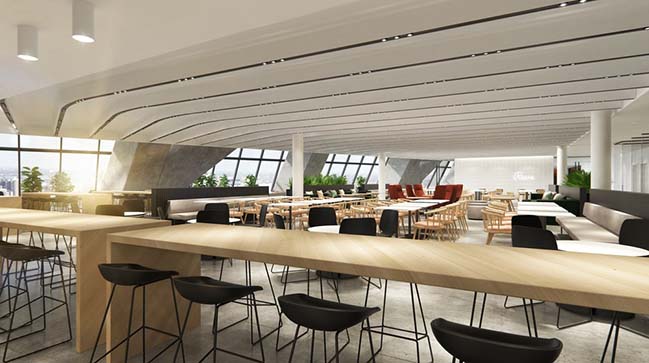 Symbolic interior design
The concept for the interior design symbolizes the tower’s history. The aim is to create a work environment that fosters interaction and creativity. The spectacular space provided by the seven floors of this iconic work of Québec architecture will be enhanced by a design adapted to the Olympic Stadium’s organic volumes in order to give employees a workplace that is stimulating and collaborative. The Olympic spirit will remain ubiquitous thanks to a selection of historical references to the stadium’s primary vocation. 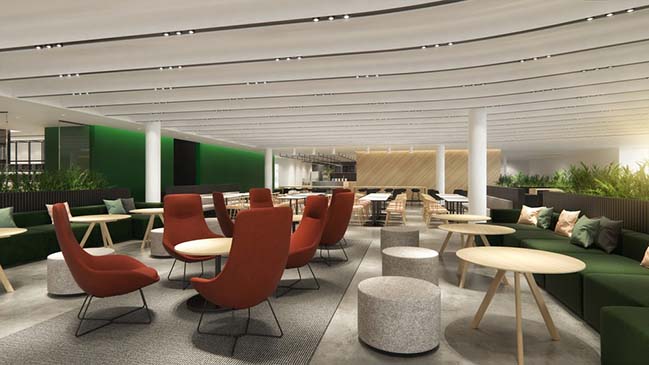 “It is a privilege to work on such an exceptional site, one that represents so many things for Montrealers. Our design strategy was to showcase the spectacular architectural character of the Montréal Tower, which is still permeated with the Olympic spirit. We designed the work space to foster collaboration and knowledge sharing in a healthy environment, which dovetails with the values of Desjardins,” explains Julien-Pierre Laurendeau, an interior designer at Provencher_Roy. 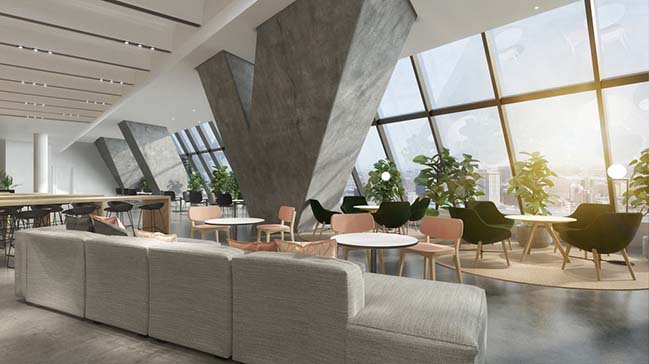 The impressive concrete structure will remain visible and be emphasized by the neutral tones of the walls and ceilings. The areas near the windows will be unobstructed in order to enable the creation of an architectural promenade along which employees can enjoy spectacular views of the stadium and the city. Zones for collaboration and relaxation will also be integrated along the imposing windows. 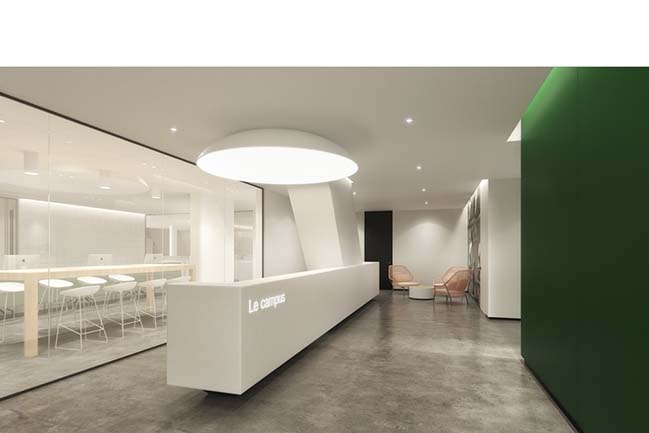 The space itself will be like a work tool, with the ultramodern offices incorporating the latest technological equipment in order to attract and meet the needs of employees aged 25 to 35. There will be areas for lounging and entertainment, coffee nooks and multifunctional rooms designed with a young, active clientele in mind. The spacious, luminous rooms will have light grey or marbled floor coverings. Elsewhere, the detail of the waiting area’s poppy-shaped ceiling will evoke the orange hue of the original retractable roof as seen from the inside. All in all, the streamlined, resolutely contemporary style will most assuredly inspire a strong sense of belonging among Desjardins employees. The project thus moves beyond the creation of a workplace to that of an animated, living space. 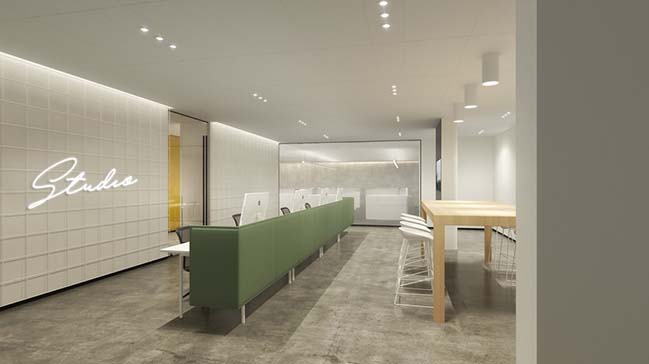 “The Tower is an iconic Montreal landmark and our employees are thrilled with the idea of working there. Offices drenched in natural light, shared spaces, rest areas, a variety of food options, dining rooms, and more—in short, a design that has been thought through to the last detail. As well, the influx of over a thousand workers to east Montreal’s Mercier-Hochelaga-Maisonneuve borough will doubtlessly help revitalize the neighbourhood and the local economy, and we’re really happy about that,” says Mathieu Desrosiers, sponsor of the Destination Montréal Tower project at Desjardins. 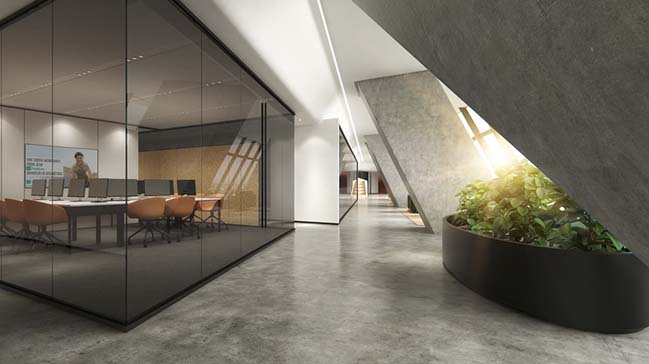 The inauguration of the revamped Montréal Tower is slated for Summer 2018. This unifying revitalization project has sparked a wave of enthusiasm, curiosity and renewed pride among Montrealers. Moving beyond its symbolic association with the Montreal Olympic Games, the Montréal Tower is poised to once more leave an indelible mark on the collective imagination. 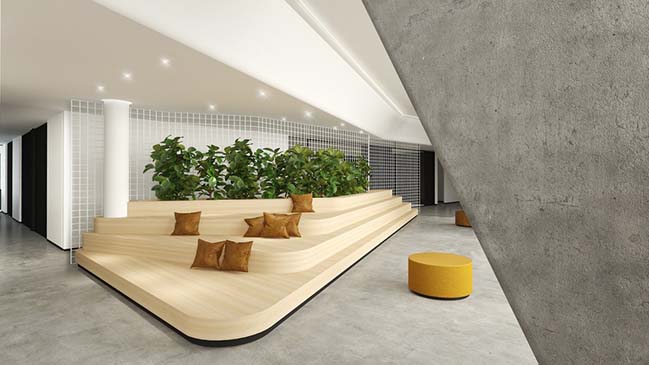 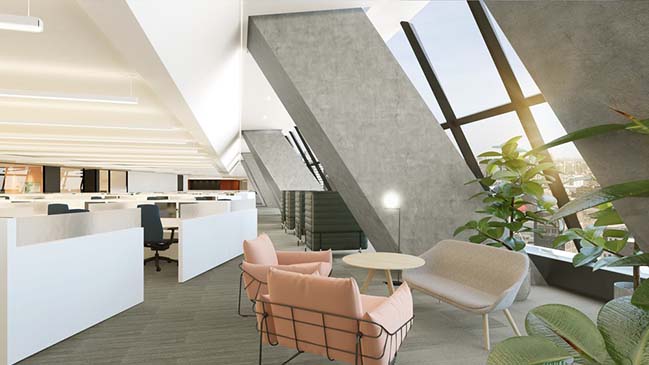 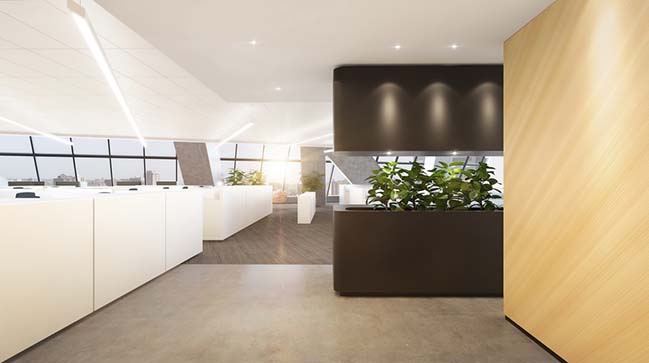 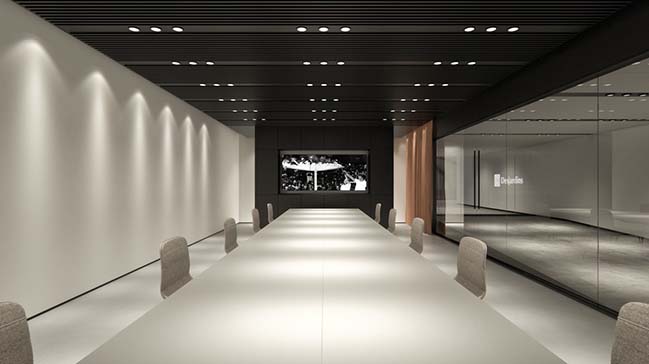 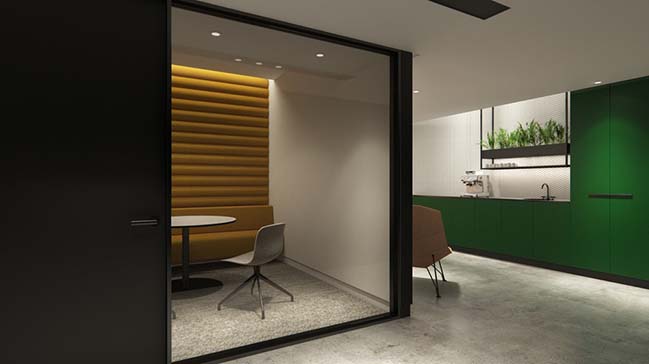 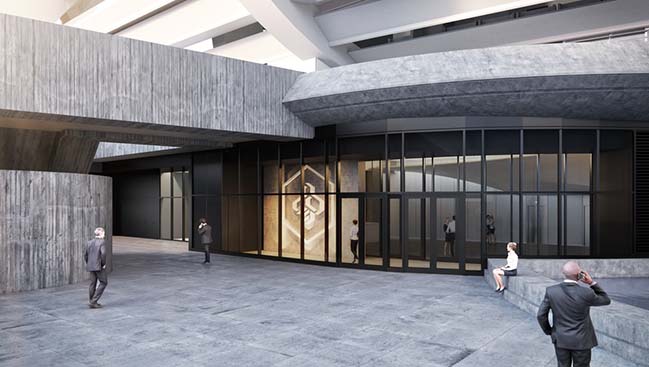 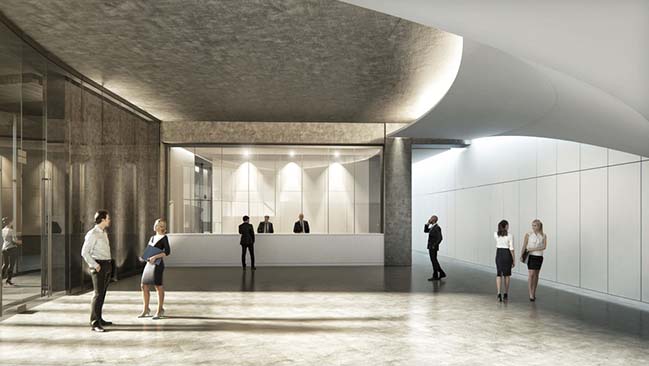 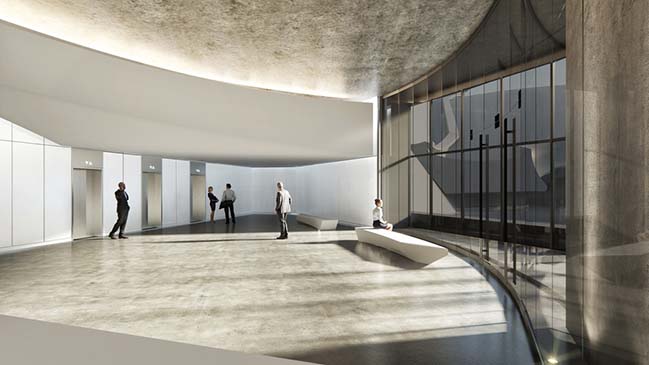 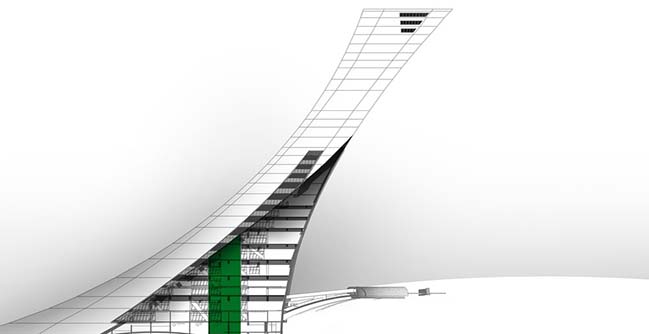 New Spaces for Desjardins at the Montréal Tower by Provencher_Roy 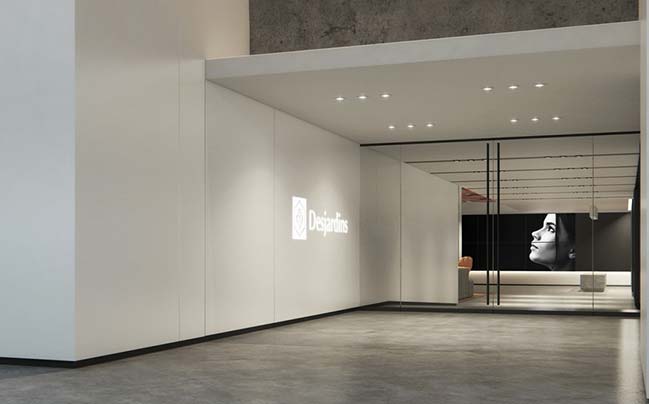