A young Italian family chooses as their pied-à-terre a flat in the heart of Paris, between the blue-grey galvanised roofs and the banks of the Seine. Studio noa* has been asked to design the interiors and help recreate the feeling of being at home. An exciting task, which deals with sensations, images and memories... 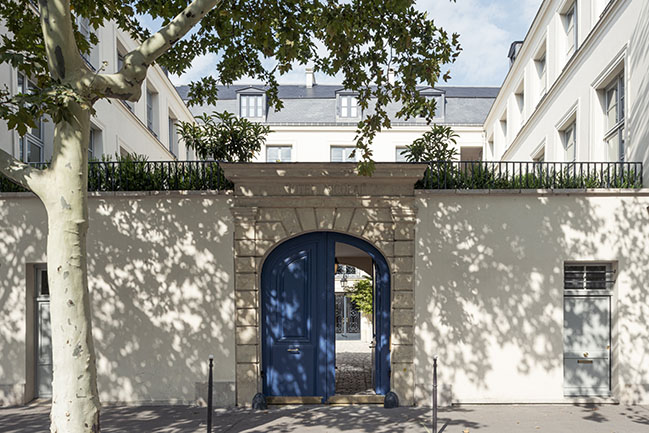 From the architect: Among the many facets with which Paris has established itself in the collective imagination, one cannot overlook the noble hôtel particulier, elegant family palaces dating back to the 18th century which rise proudly alone amid the urban fabric. One such building, the hôtel Nicolai, was the reason for noa*'s first site inspection in the Ville Lumière. The assignment: to renovate a flat occupying part of the second floor and the attic to make it the new home of a young family. 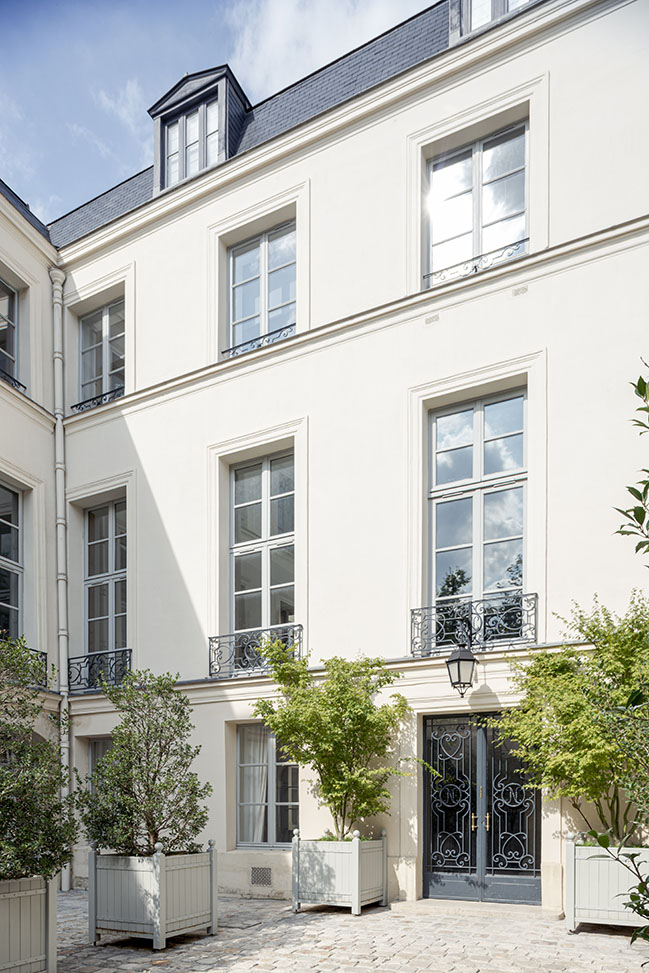 SPATIAL CONTINUUM
Following the design philosophy that has always marked noa*’s approach, the interior designers began with a phase of research and intense dialogue with the client to ensure that the flat would tell their story in the best possible way. The result was the outlining of a "nomadic spirit" of the owners as well as the recall during the first talks to an object which, for those who describe themselves as citizens of the world, has a strong symbolic meaning: the logarithmic spiral shell of the Nautilus:

"The Nautilus is among the rare creatures to have survived the Cretaceous period. This is said to be due to the shape of its shell, which allowed it to feel at home all the time - a shell designed so well it has made possible for a hermit crab to survive from the time of the dinosaurs to the present day". 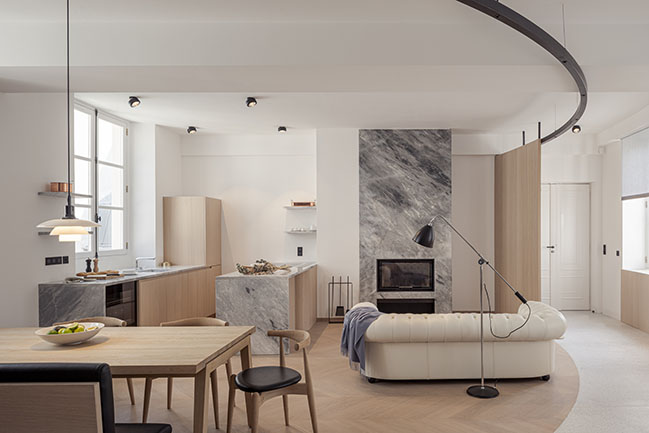 The shell, which symbolizes domestic comfort, together with Parisian inspirations have led to a project with a refined and timeless character. The curved line becomes the stylistic signature of the apartment: this undulating movement is also present in the spatial distribution, as the different functions of living naturally succeed one another. 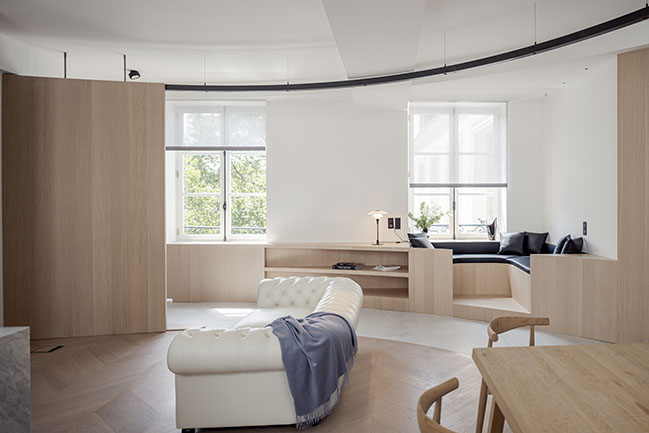 TAILORED DESIGN
In choosing the fittings and designing the oak furniture, noa* wanted to convey the elegance of the Marais district, where the property is located, into the flat. The colour of the blue-grey marble, the fabrics of the cushions and upholstery, the choice of materials and colours for the floors, ceilings and walls are all inspired by the roofs of Paris. 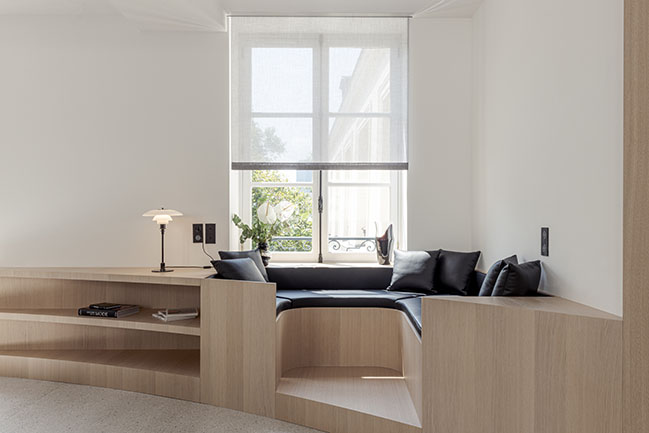 The ground floor has a service and guest entrance. From both perspectives, the chromatic and material division of the floor stands out: the living area is in bleached oak parquet in a French herringbone pattern, while the circulation corridor is in terrazzo. This runway seems to divide the floor into two islands: on one side, a niche overlooking the Seine, where people can read or chat, furnished with oak seating and black leather cushions. On the other side, the kitchen and living room area, where the gaze rests on the elegant greyblue marble “Bardiglio Imperiale”, used for the fireplace cladding and the kitchen top. The Chester sofa and a cosy dining area with a bench complete the furnishings. 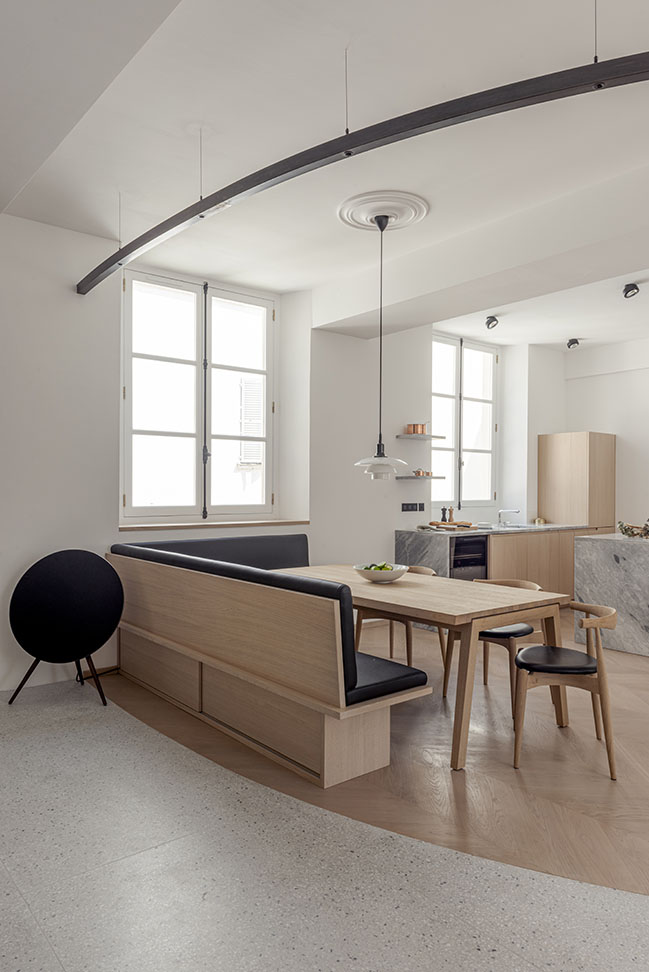 The focal point of the design was the connection between the lower and upper floors: a sinuous, organically shaped staircase visually extends the terrazzo corridor. The service area (laundry, toilet, walk-in wardrobe) follows the course of the stairs and is enclosed by a curved wall. Also on the lower floor are two bedrooms and a bathroom. 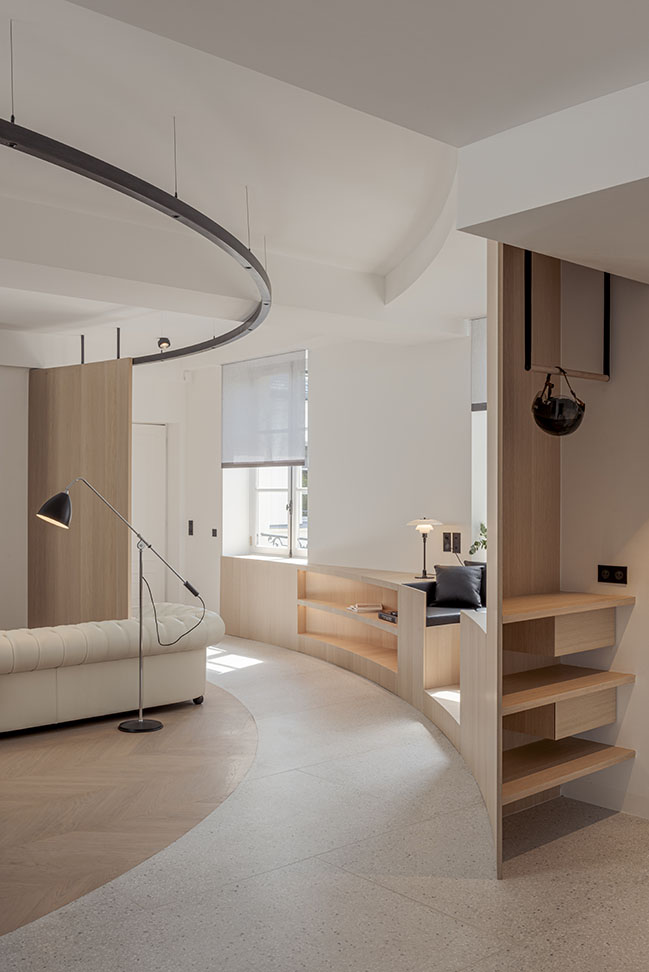 The master bedroom is furnished with a freestanding bathtub, carved from a single block of “Botticino Fiorito” marble. The washbasins and shower surfaces are made of the same material. Distributing the loads created by the bathtub so that the old load-bearing structure could support them was one of the most demanding challenges in the project. The upper floor houses a multifunctional room equipped for home cinema and a guest room with bathroom.

The result is a project with a serene, calm, and welcoming atmosphere — a flat with curved lines and the scent of wood, where you feel immediately at home. 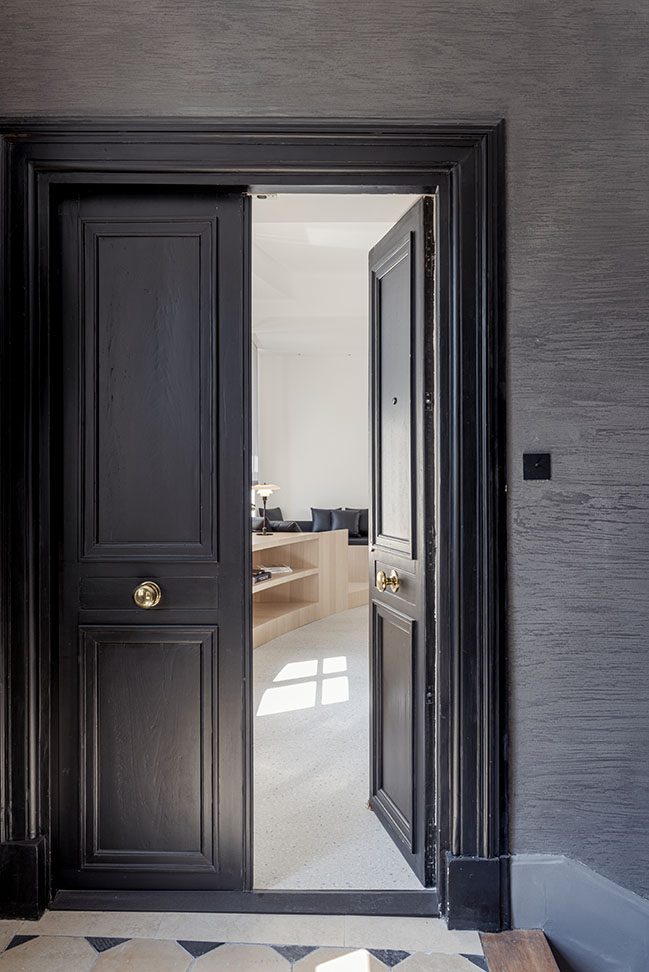 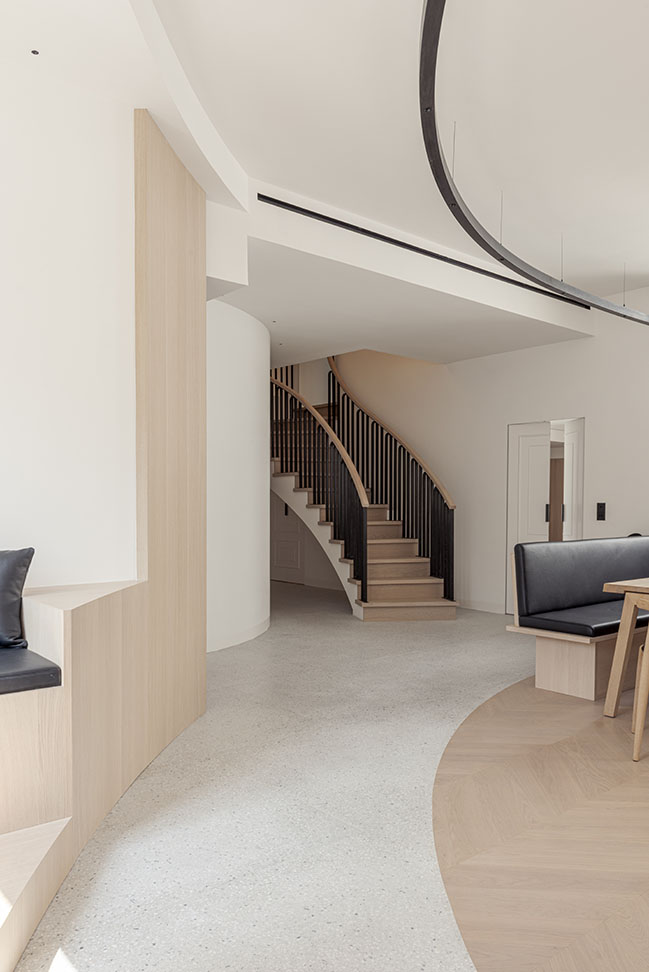 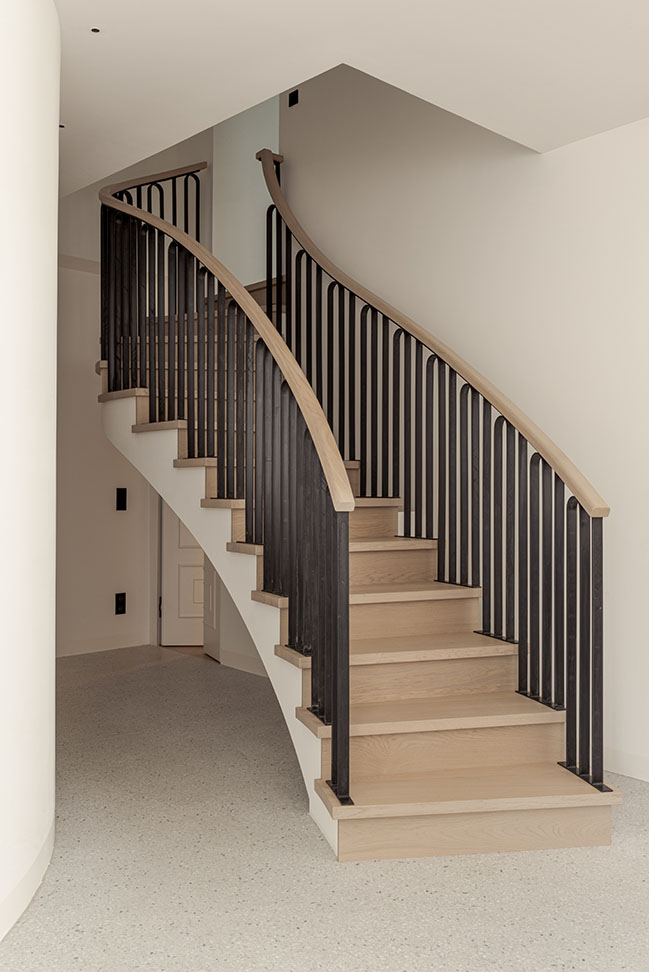 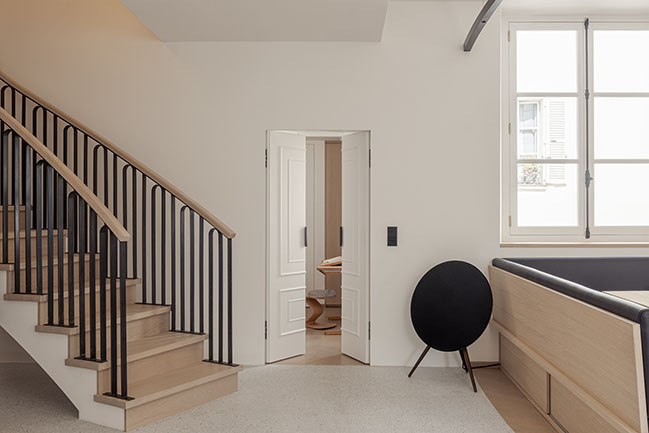 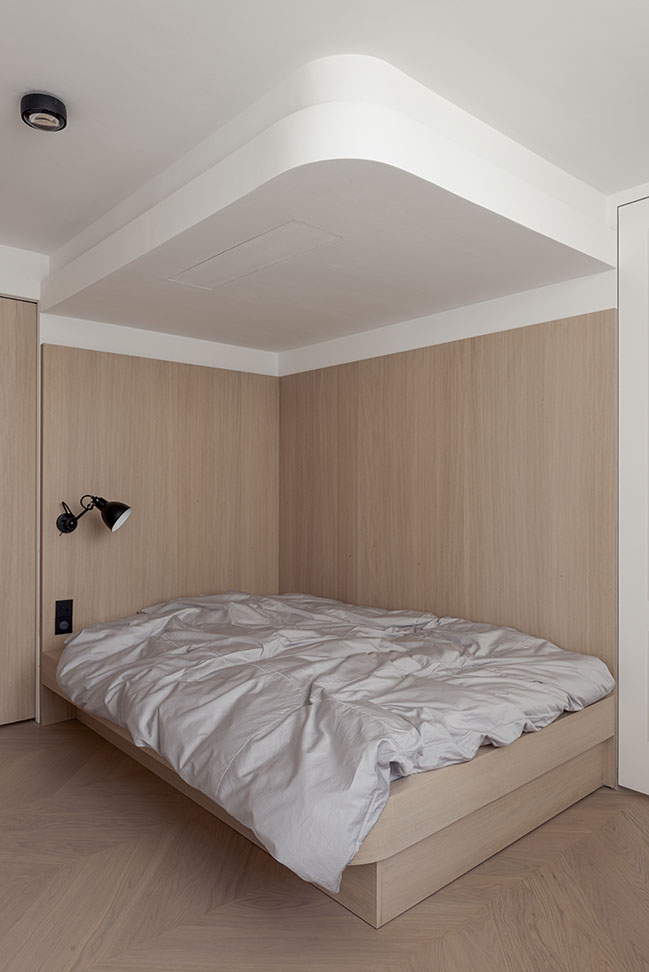 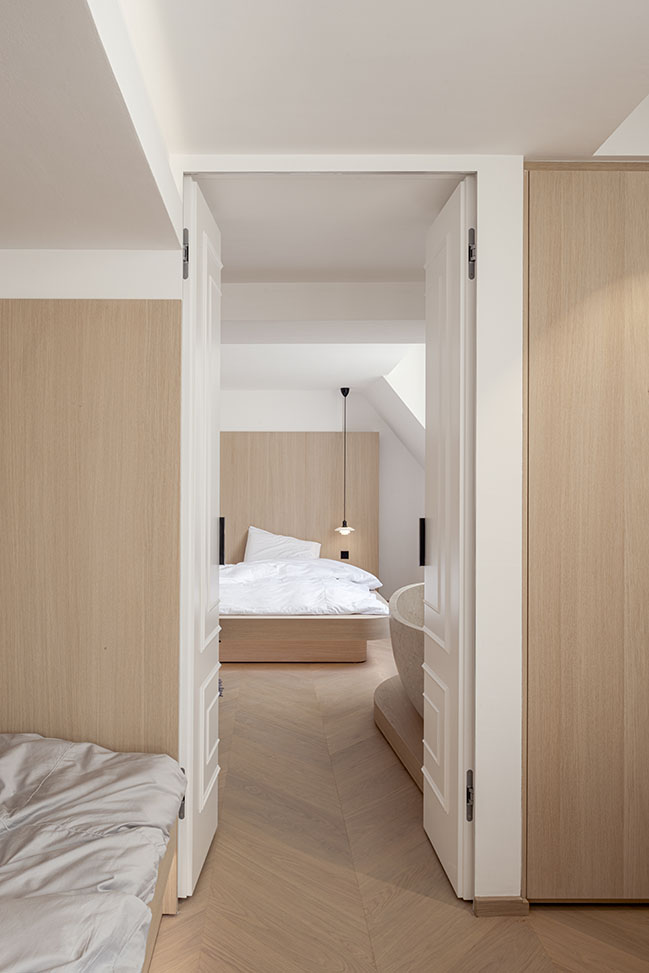 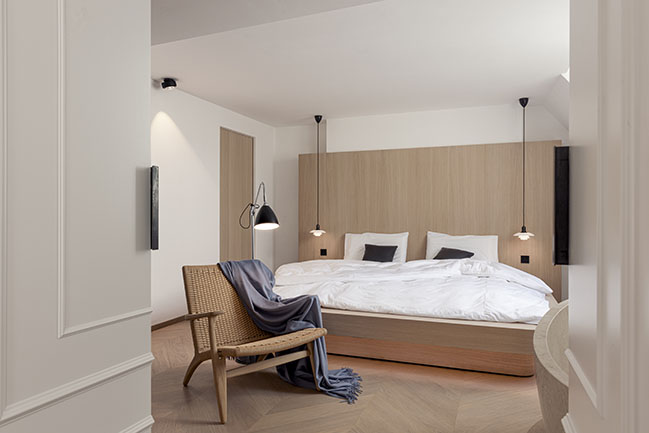 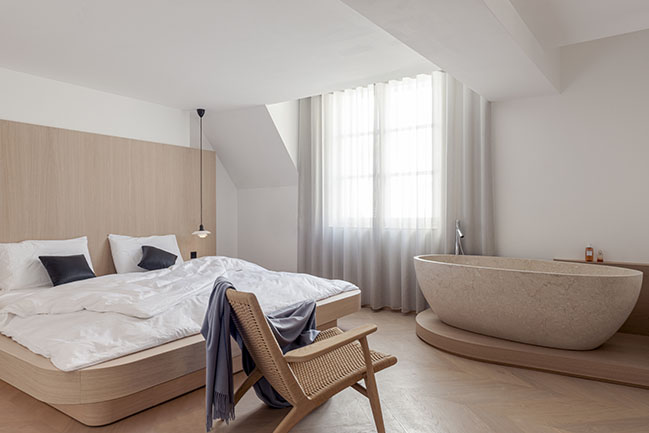 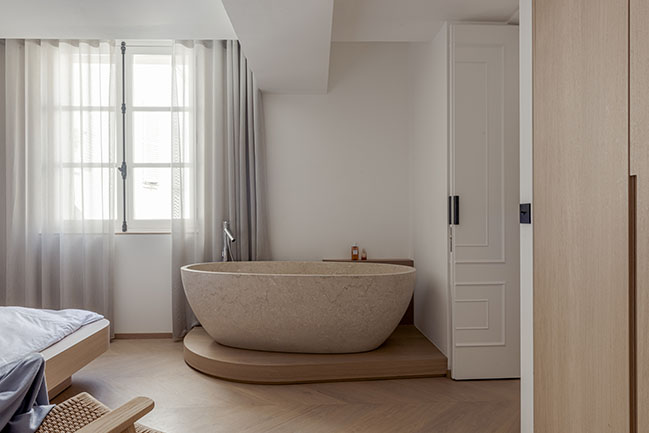 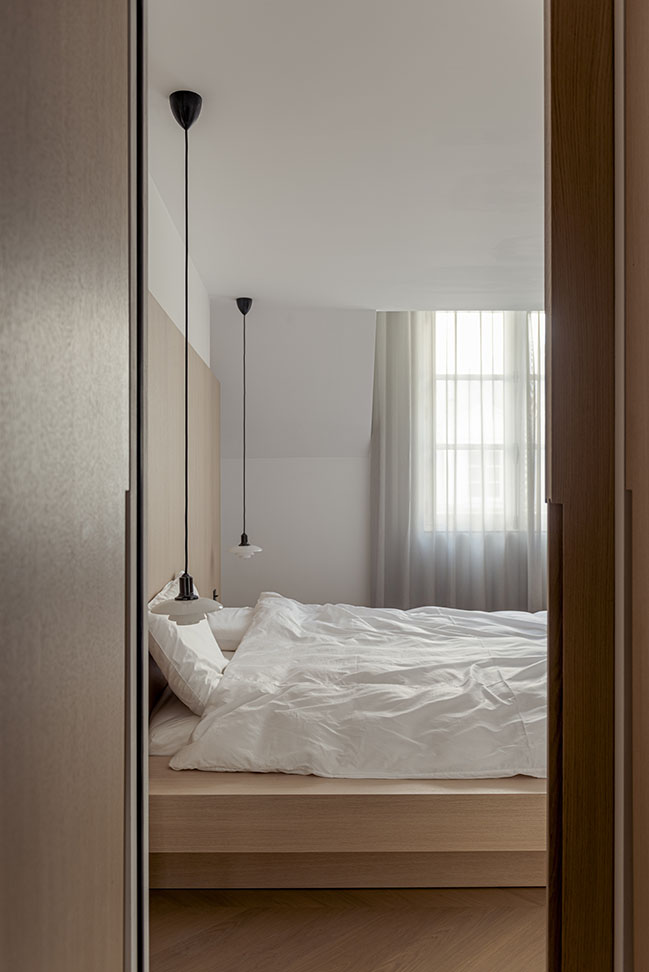 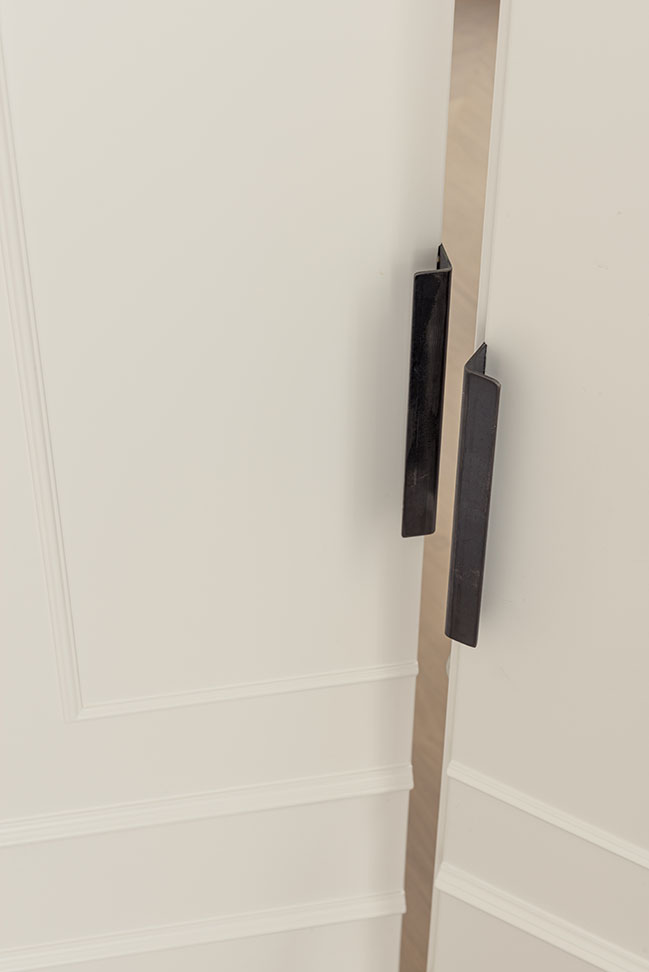 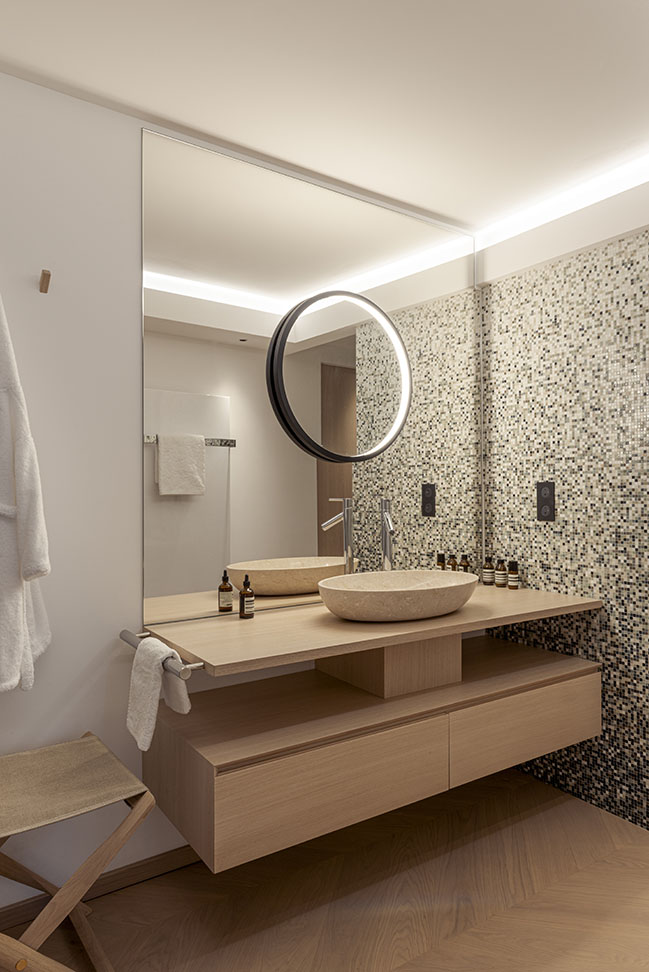 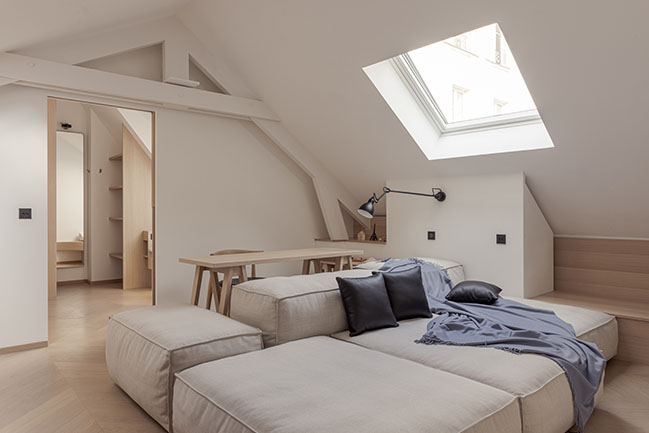 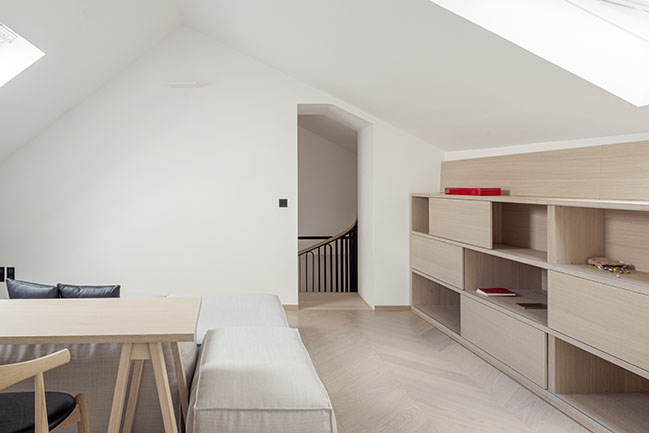 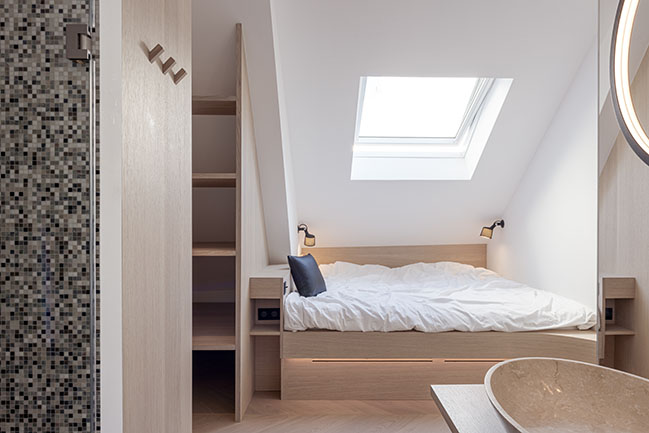 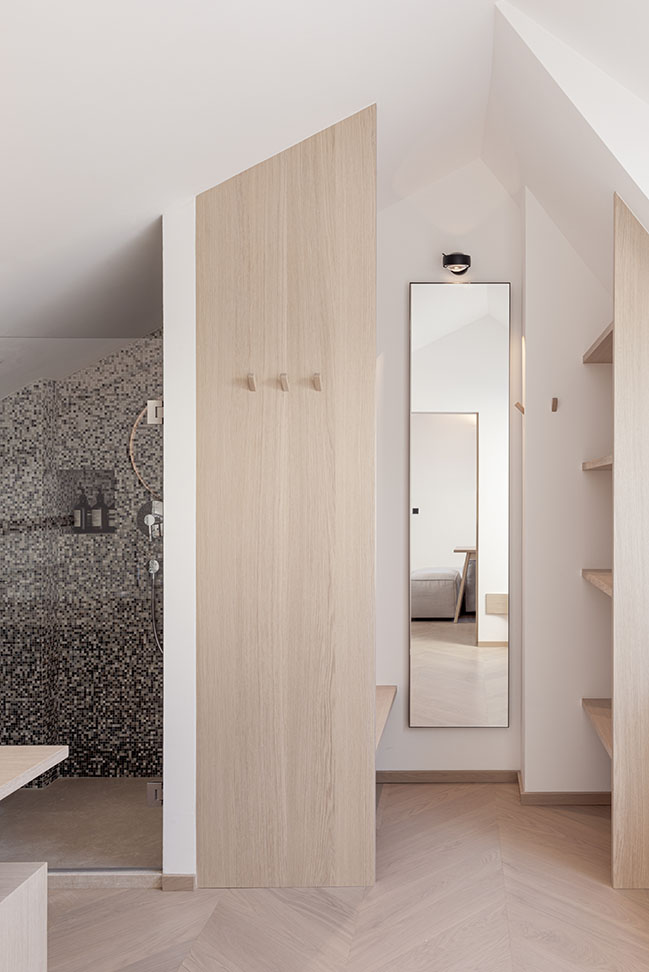 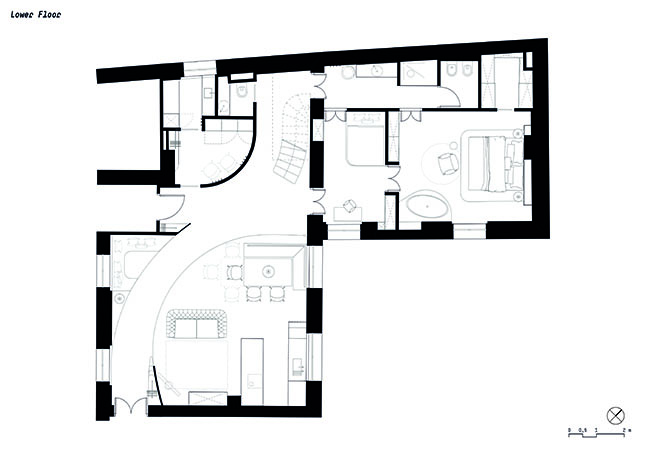 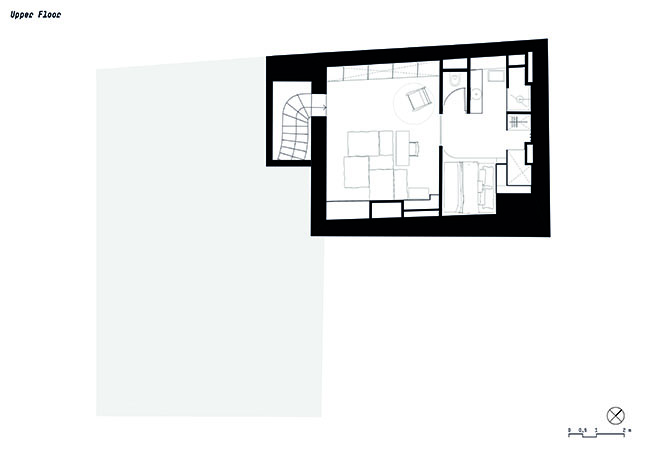 01 / 24 / 2022 Studio noa* has been asked to design the interiors and help recreate the feeling of being at home. An exciting task, which deals with sensations, images and memories... 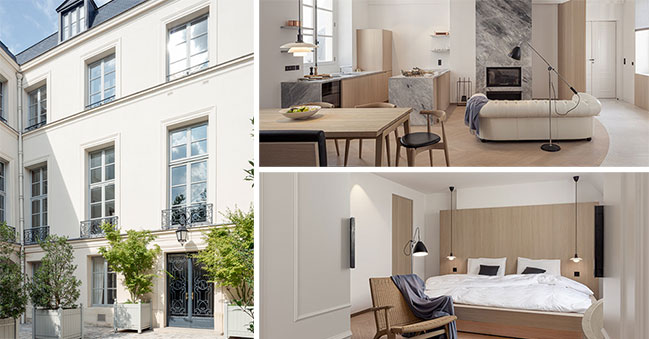