ODA revealed new design for the Academy of the Hebrew Language

ODA recently proposed this concept for a competition hosted by the Academy of the Hebrew Language for their new headquarters... 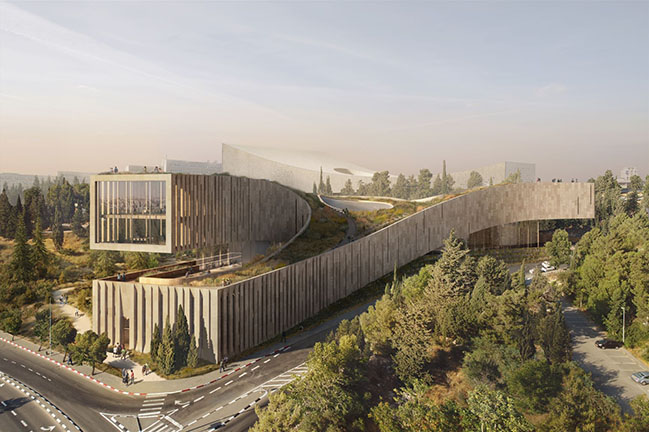 All images by Secchi Smith

From the architects: ODA designed the Academy with sustainability at top of mind. The design incorporates key sustainability solutions such as shaded outdoor terraces, low water plantings, rainwater collection, and reduced heat island effect. These are most evident in the pocket garden and small inner courtyards which bring natural diffused light to the interior of the building. There is also a solar shading system on the exteriors that controls heat gain and energy consumption. 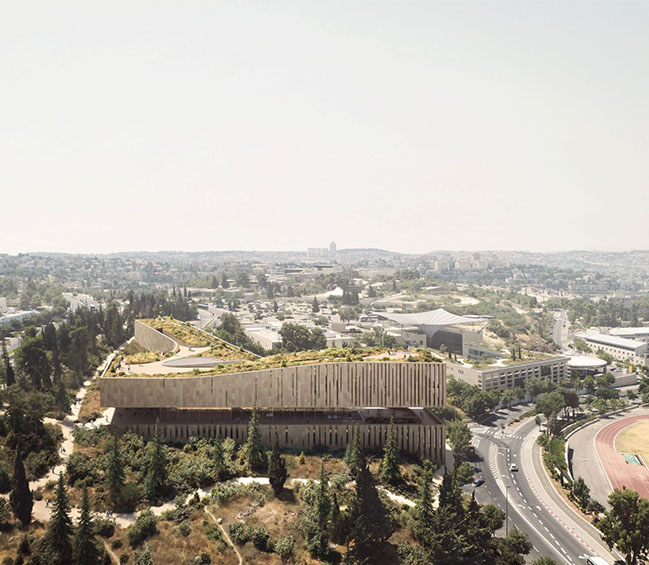 The new Academy is meant as an orientation point for the entire cultural district, a place for worlds, languages, and history to collide and meld together, as Israel has been for centuries. Nestled between the Israel Museum, the Israeli Supreme Court, the future site of the National Library, the Knesset, and the Hebrew University, the design offers a fluidity of perspectives and connections between the Academy and its rich surroundings. 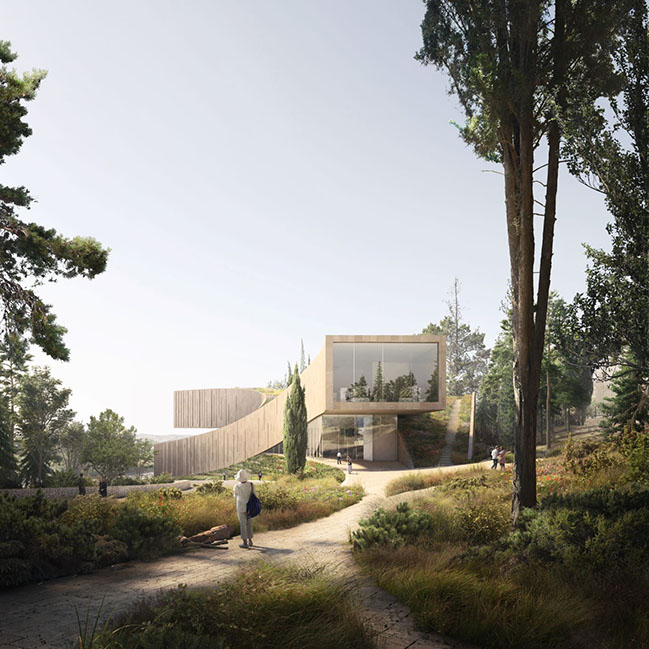 In plan, the design reacts to the curve of Stephan Weiz Street while it transforms in three dimensions to the rectilinear shapes of the Jerusalem Botanic Gardens, and National Library beyond. The value of its innovative design lies in its elevation and the creation of a public park connecting the surrounding grounds. The landscaped rooftop becomes a natural extension of the surrounding park, filled with indigenous plants and multi-leveled green roofs. From the distance, the design looks like a large sculpture in the center of the park, undulating in all directions. 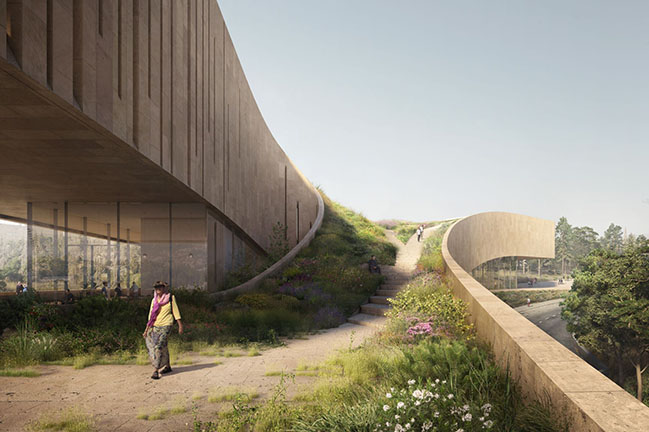 The design offers two major access points: the north plaza and the south plaza. From each plaza the form allows visitors to ascend from the ground to two vantage points offering captivating views of the surrounding district. The building’s form, like language itself, becomes an important function in connecting a diverse group of visitors and citizens alike. 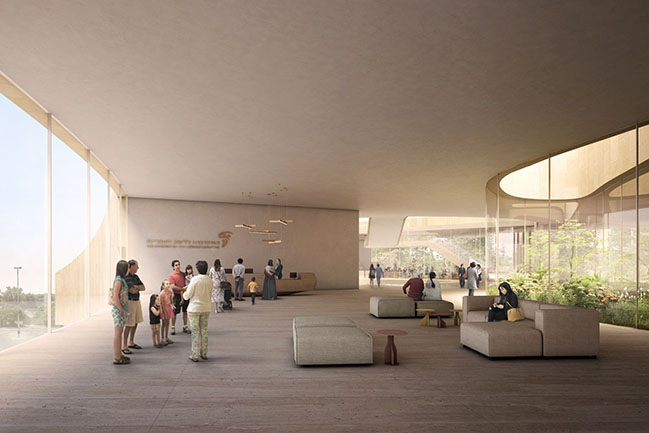 The Academy of the Hebrew Language represents, and also determines, how the Hebrew Language has continually evolved and grown from ancient times to modern day. The academics who drive the academy are part of a continuum that represents the history and traditions of a people. ODA’s design is meant as a translation, quite literally with the façade design expressing the linear arrangement of the Hebrew phrase referencing The Tower of Babel and its myth of the origin of multiple languages.  Abstracted from the historic original Hebrew characters, to the modern square Hebrew characters and ultimately applied to the façade through vertical graphic manipulation, the Jerusalem stone façade can be developed into a literal expression of the Hebrew language. 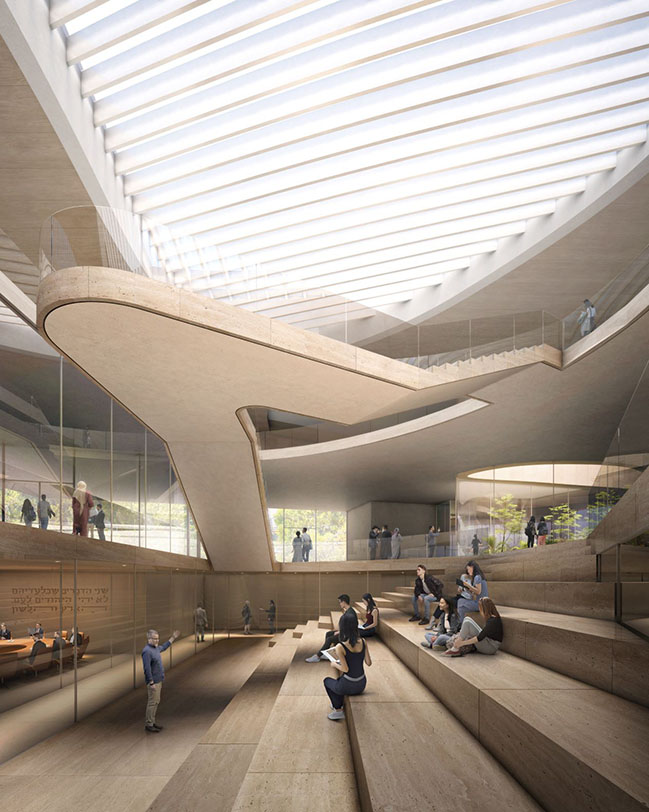 Hebrew Language as a Unifier
From the contextual connections to the architectural expression, purpose and form come together in a way that allows for the Academy to be a truly unifying force. From the interior layout and programmatic distribution to the tailored workspace, to the vast open spaces and connection to nature and climate, this new home allows for many functions to exist under one roof.

Three distinct program elements —academy, common spaces/conference center, and exhibition — are arranged around a 56-foot-high central atrium and permeable ground floor, the building functions as a compact, unified campus.  The academy has the flexibility to function autonomously while having direct access to both common and exhibition functions. Three functions wrapped around the central atrium. 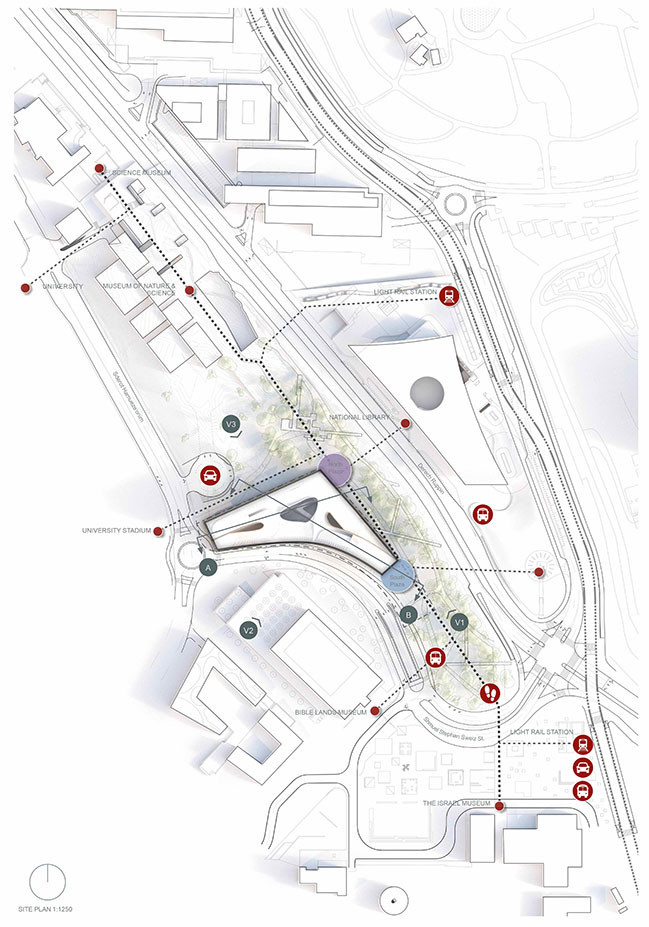 Academy: This private area of the buildings acts as an office space for Academy employees, has a library for internal staff and houses the archives. The Academy of the Hebrew Language was originally established by the Israeli government in 1953 as the official institution for scholarship on the Hebrew language. The Academy, made up of 23 members and 15 academic advisors, publishes an official Hebrew dictionary and creates new words to keep up with modern context.

Common Space:  The semi-public program holds classrooms, auditorium, plenary, and event programming.  It's used directly by the academy and available for use by the public and programming by the exhibition.

Exhibition: The public section of the Academy, the museum display, and guided activities are open to a variety of audiences. At the Center and Gallery, visitors will embrace their consciousness and expand their familiarity with the Hebrew language, and understand its importance, uniqueness, and impact on their personal identity, the essence of Israeli society, and beyond. 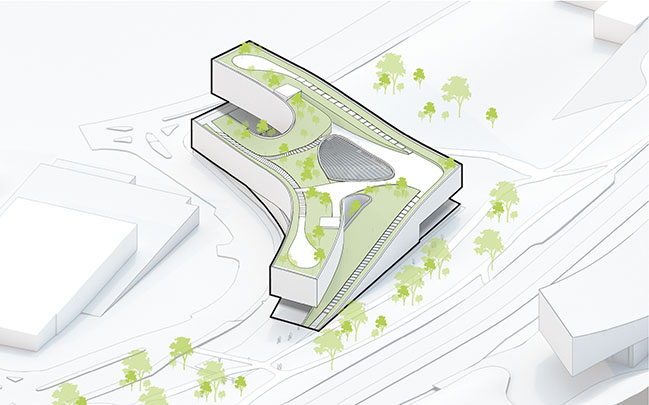 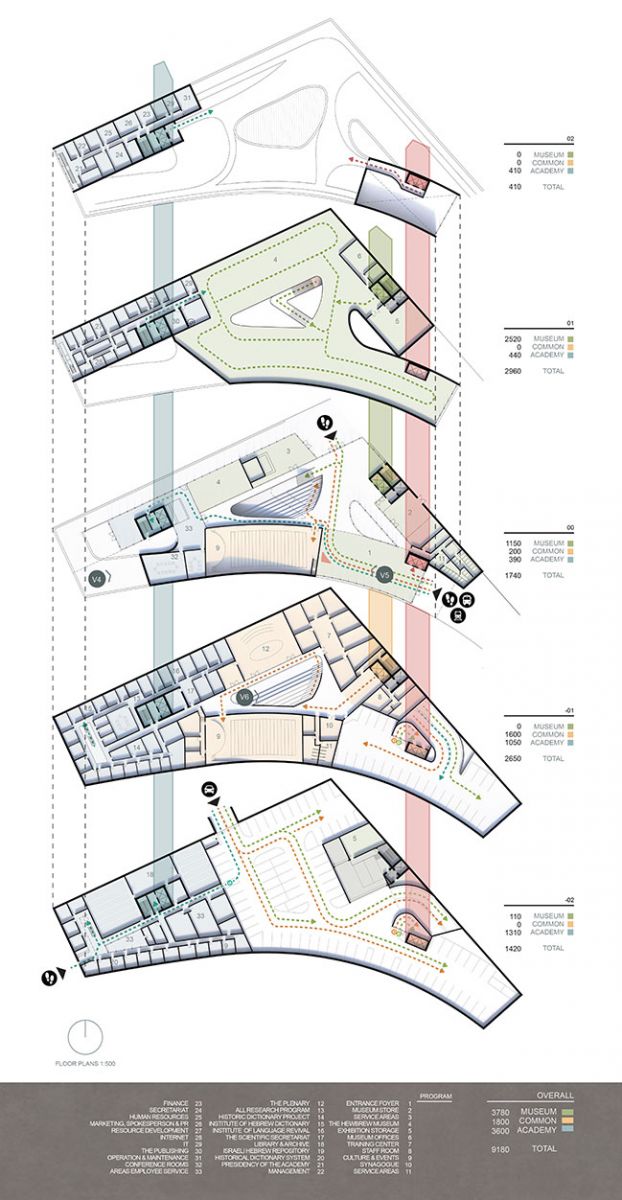 ODA revealed new design for the Academy of the Hebrew Language

12 / 12 / 2020 ODA recently proposed this concept for a competition hosted by the Academy of the Hebrew Language for their new headquarters...