The Utopia has proposed the S:t Erik's indoor park that is constructed in the form of a load-bearing laminated timber construction clad in vaulted glass. 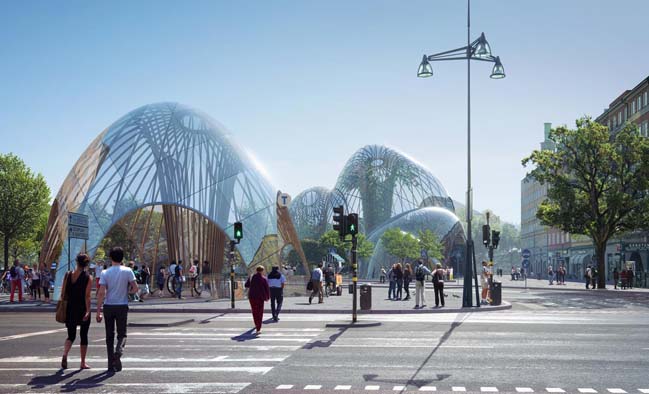 Project's description: The more of us there are who have to be able to associate and share experiences outside our homes, the better our public spaces need to be designed to be able to meet the future's major and more complex needs. Stockholm, and many other cities, has a major need for more non-commercial public indoor environments. People who want to get together in an indoor environment outside the home are today, with the possible exception of libraries and certain museums, almost exclusively directed to commercial environments such as shopping malls, restaurants and cafés. The increasingly commercialised inner city means that, for purely economic reasons, large groups of people are circumscribed in their options for socialising outside the home.

Increasing the number of non-commercial spaces is a desire and an ambition which is also clearly expressed in Promenadstaden (the Walkable City), the current structure plan for Stockholm City. Yet we are seeing very little of the development. It is clear that the city needs an injection of strong ideas and concrete realisable projects to manage this. S:t Erik's indoor park is one example of a solution which can create these badly needed environments. S:t Eriksplan is a potentially suitable location, even though the need for these environments is naturally at least as great in many other parts of the city, not least in its outer areas. We would like our park not just to be viewed as a proposal for what can be done specifically in S:t Eriksplan, but rather as the start of a wider discussion on how we can and should manage our existing, and not least future, public environments. 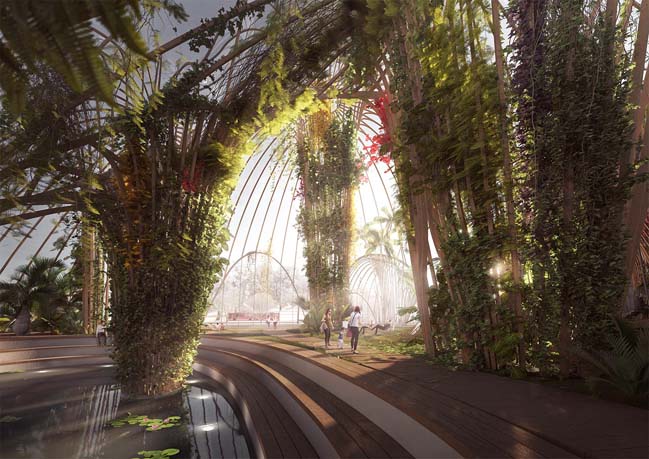 S:t Erik's indoor park is a public space for play, socialising, contemplation and cultural experiences. A completely ordinary park, though under a roof, where we all have access on equal terms. The park offers vegetation, warmth and a welcoming environment, all year round and for a large part of the day.

The controlled indoor environment makes the indoor park attractive as a place for functions and activities which are currently difficult to accommodate during the cold and dark part of the year. We believe that the park here can meet a major need in both the local area as well as throughout the city.

The building will have facilities and space for stage performances and education. A large number of the city's municipal cultural and educational activities can have a new premises at their disposal here at a limited cost. We envisage meetings of authors with readings, preschool visits with flower planting, theatrical performances, consultation meetings for urban development issues, school concerts, meetings of associations, art exhibitions, children's theatre, guest performances from other arts centres, civic dialogue, debates, urban cultivation courses, ”outdoor cinema”… The park will not least be a valuable asset for preschools' and schools' educational work with the focus on ecology and understanding our environment and the surrounding world. Just like the city's other parks, St Erik's indoor park will be an arena for all ages and interests. The only limits to what the premises can be used for are set by the imagination.

With the aim of finding a form for collaboration and management that can cover certain running costs, we want to investigate the possibilities to, in conjunction with the municipality, produce potential proposals for different forms of social enterprise which can utilise the park and its possibilities in order to further enhance attractiveness. 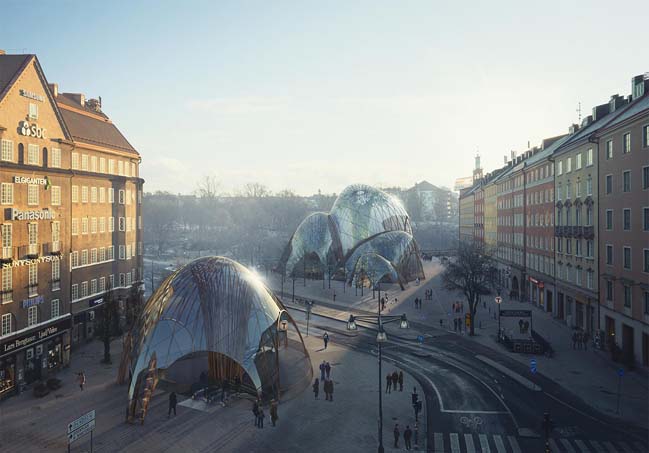 S:t Erik's indoor park is constructed in the form of a load-bearing laminated timber construction clad in vaulted glass. The park building consists of a total of six linked ellipsoid-like volumes of varying size and shape. The slender wooden beams make the buildings' facades almost completely transparent, at the same time as the internal column-like sections are closer together, giving the elevated volumes a sense of stable anchorage.

Today's underground exit on the other side of Odengatan's extension has been replaced with an entrance building which is a companion to the ”main building”. The entrance building creates a powerful visual connection with the main building and strengthens S:t Eriksplan's overall identity as the site for the city's only indoor park.

The wood and glass materials produce a light and elegant building which, with its verdant interior and abundant lighting, will stand out as a landmark in the cityscape. The park is strongly integrated with its surroundings and easily accessible for the general public in purely physical terms. Entrances and passages are generous, welcoming and clearly linked to surrounding pedestrian routes.

The building will be some 23 metres tall, at a level with the eaves of adjacent buildings, and will have an area of about 1,500 square metres. 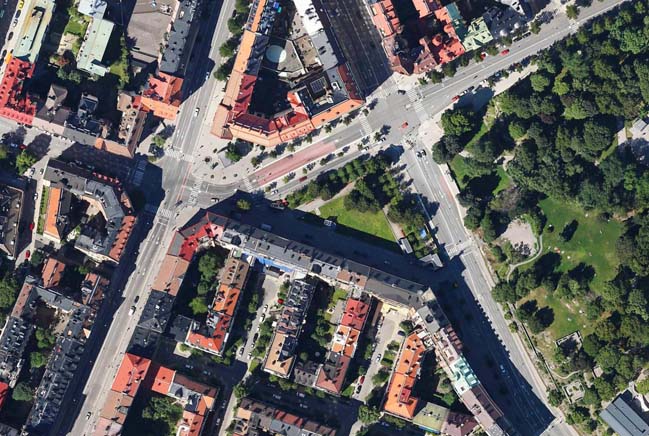 The idea is to locate the park in the site which is currently largely covered by a raised grass area enclosed by a high kerb. The solution is inhospitable and does not encourage use of the lawn. It also means that the grassy space is currently used to a very limited extent. S:t Eriksplan is a typical example of how at present many public spaces in Stockholm are often poorly maintained in order to create a living urban environment where the inhabitants can share experiences and meet up.

In many ways the location is ideal for such an environment. The area is very densely populated and S:t Eriksplan is an obvious hub for local traffic with its underground station and bus stop, including for two trunk bus lines. Adjoining the site is Vasaparken, which is already a natural attraction for Stockholm residents of different generations, not least families with children. This part of Vasastan also has a rich diversity of cultural activities which could make beneficial use of the park as a supplementary premises.

Both the location and the building's design means that many people on the move would be naturally exposed to and attracted to take part in events and activities which would otherwise not be visible in the same way in the urban environment.

The point of departure for the project has been to create a fundamentally sustainable building. The material is climate smart, resistant and recyclable. Solutions for heating, cooling and lighting are selected for the highest available standard when it comes to energy efficiency. The building can produce its own heating for a large proportion of the year. During the colder times of year, the park should be able to reuse heat from exhaust air from the adjacent underground and the garage beneath St Eriksplan. 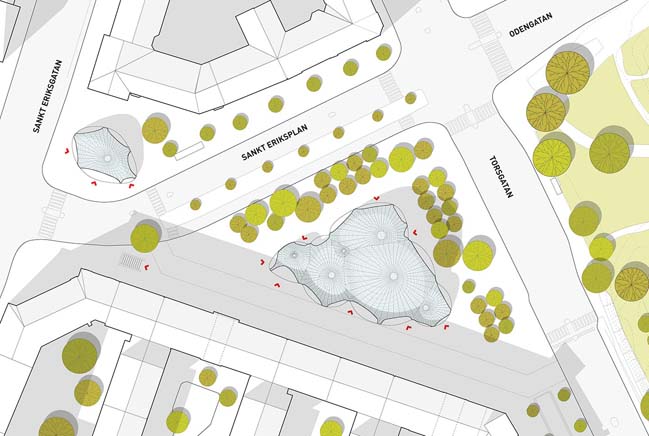 03 / 19 / 2017 The Utopia has proposed the S:t Erik's indoor park that is constructed in the form of a load-bearing laminated timber construction clad in vaulted glass