Henning Larsen wins Major International Competition for the Design of Shenzhen Bay Headquarters City in China. From 15 participants, three winners have been selected to collaborate in the design of a new 5.5 million m2 district that will become the new center of Shenzhen, a polycentric megacity of 20 million people. Henning Larsen is the only foreign team among the winners. 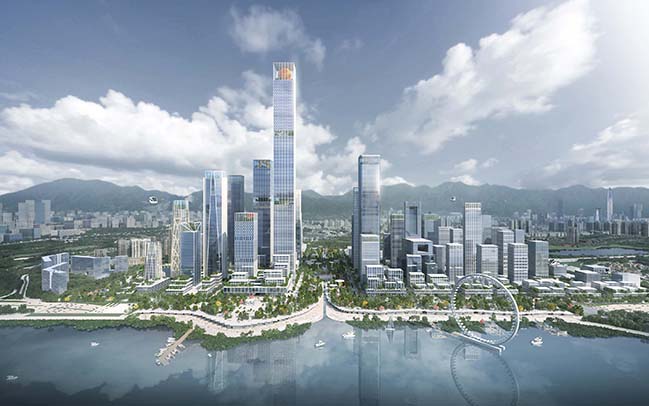 Shenzhen Bay Headquarters City is poised to become the lightning rod for development in Shenzhen and the Greater Bay Area, the largest bay economy in the world. The area boasts a population of 70 Million people and includes other metropolises such as Guangzhou, Hong Kong and Macau. Often called China’s Silicon Valley, Shenzhen is home to a cohort of innovative tech giants such as Tencent, Huawei and ZTE.

To establish Shenzhen as the Heart of The Greater Bay Area and cement its position as the leading innovation center of China, Henning Larsen envisioned an ambitious masterplan that shifts paradigms of Chinese urban planning and sets the standard for the green, sustainable and livable city of the Future China. 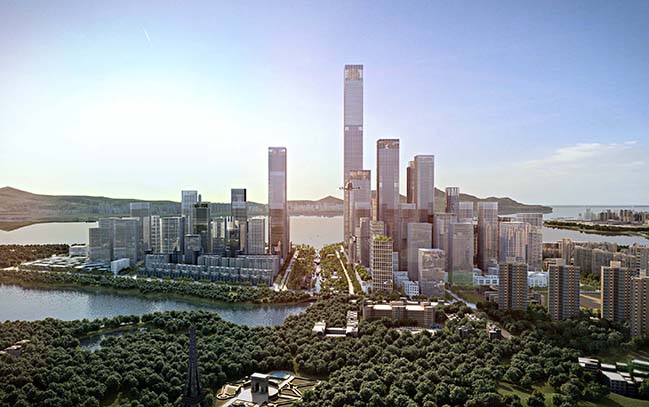 Making Shenzhen a Waterfront city
The existing business districts of Shenzhen were developed kilometers away from the seafront. The location of Shenzhen Bay Headquarters City offers a unique opportunity to repair a historic missed link between city and sea.

“Our design aims to make Shenzhen the waterfront city it should always have been,” says Claude Godefroy, Partner and Design Director of Henning Larsen’s Hong Kong office. “To create an attractive waterfront we brought commercial and cultural facilities meters away from the seashore, so citizens will finally be able to enjoy the atmosphere of Shenzhen Bay in an activated urban environment, like in Sydney, Singapore or Copenhagen.” 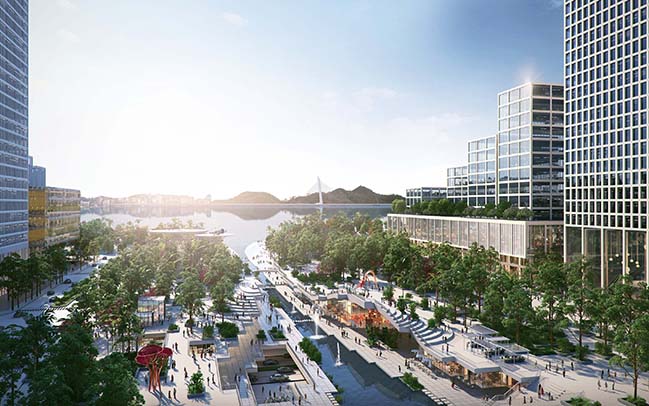 A Pedestrian City Centre
Chinese planning authorities have prioritized vehicular traffic for decades, resulting in poor conditions for pedestrians in many Chinese cities, Shenzhen in particular.

Henning Larsen’s design aims to create a pedestrian urban realm; cars are relegated to an extensive underground network of highways, roads and parking. “Most of the commuters’ cars will never surface in the district. This will change everything for the quality of the pedestrian experience and will be quite unique in China,” Godefroy adds. 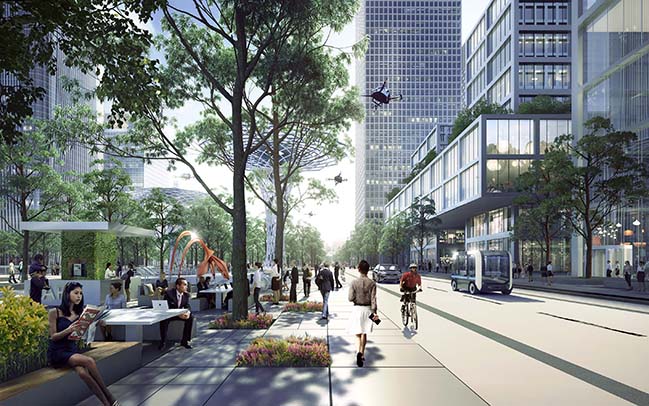 For instance, all the basement levels of the district are interconnected in a network of retail arcades and sunken plazas, replacing the need for outsized shopping malls above ground. “Shopping malls act as black holes in the city, sucking all the life away from the public realm. We want to rebalance the dominating commercial activities of the city with more civic and culturally oriented activities in the urban realm.”
In lieu of the massive shopping malls traditionally sitting beneath the tall buildings, Henning Larsen proposes a porous urban fabric composed of smaller buildings sitting in between the towers. At eye level, this urban typology offers a human scale with narrow alleys and small piazzas. 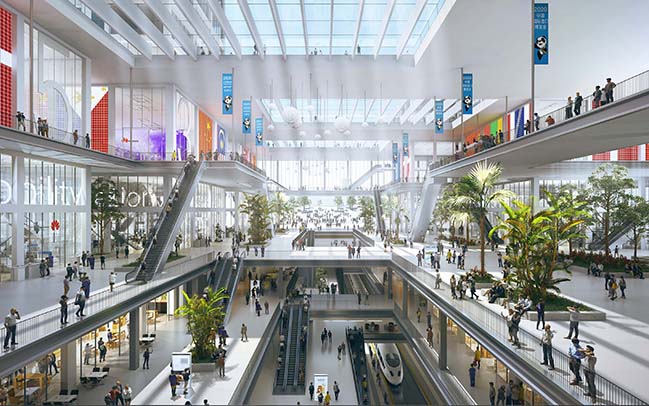 A Cooler Part of Town
The porous urban fabric also allows effective urban ventilation by making use of the sea breeze, which can contribute to cool the district significantly in the punishing heatwaves of the summer. Other measures to cool the district include 10.000 trees, roof gardens and whitewashed streets. “The success of this district depends largely on our capacity to reduce the heat in the public realm, especially when considering climate change,” Godefroy explains. “We know by experience that our initiatives can reduce the heat within the district by 5-8 degrees compared to the surrounding city. The added comfort level will encourage citizens to use the public realm.” 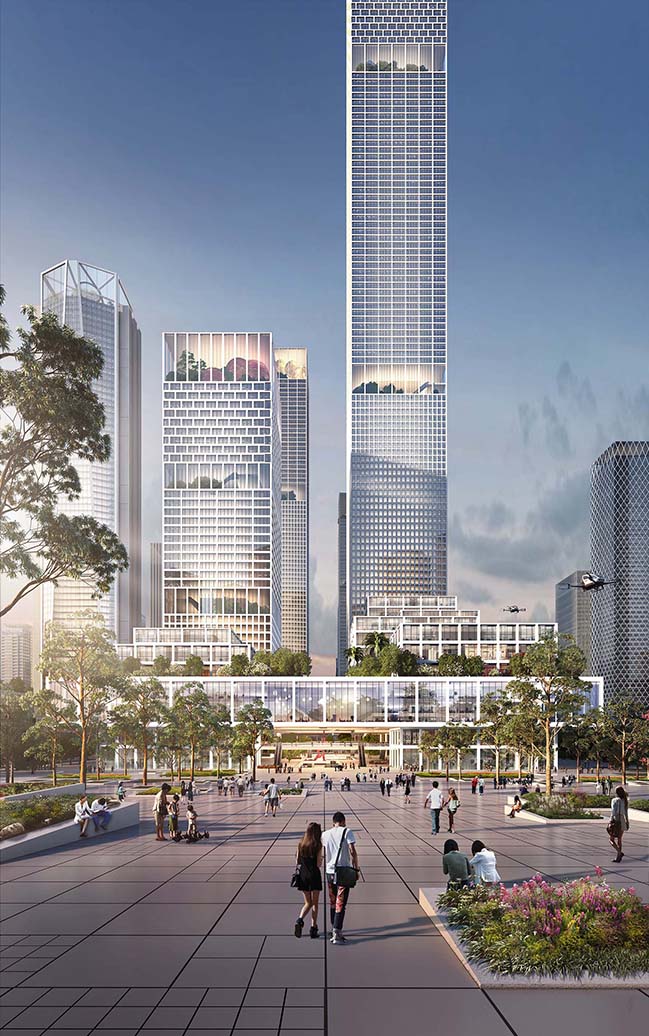 Attracting the Talents of Tomorrow
As the millennial generation reaches the age of independence, these young urban dwellers seek to take ownership of their homes and neighborhoods. Henning Larsen researched these aspirations and took steps to update the design of the public realm and create city that is relevant to the needs of future generations. These initiatives became additional “Cities” that were added to the masterplan: Nature City, Shared City, Smart City, Knowledge City, Art City and Leisure City. 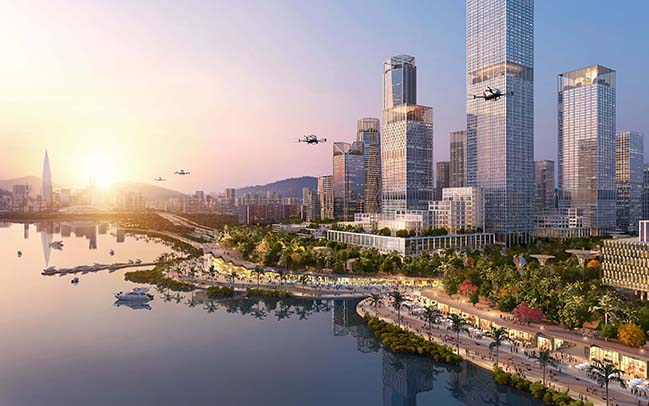 An Art City
The initiatives of “Art City” aim to create a cohesive cultural experience throughout the masterplan. Each plot already needs to build 5-8% of their area as cultural program by law, but coordination is necessary to ensure complementarity of the different galleries and venues. In the public realm, art will be displayed in the streetscapes by themes (as in a museum) and large-scale art installations will attract attention from afar. The seafront will house larger cultural venues for performing arts and exhibitions. Furthermore, an ambitious plan to impose public and cultural venues at the pinnacle of the tallest towers will create “the Skyline of Art” and define the overall image of the entire district. 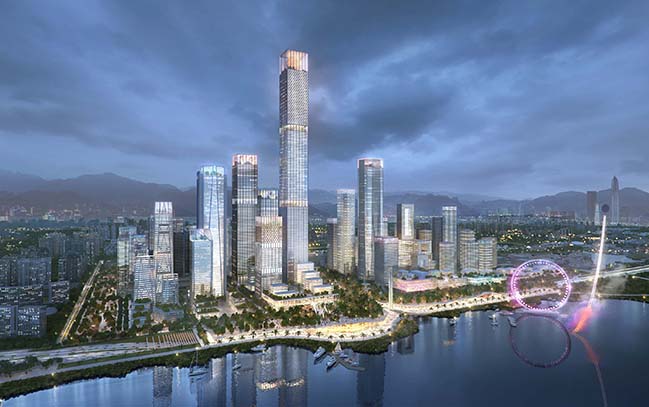 A Shared City
The sharing economy is increasingly changing workspaces and challenging the dogmas of what our cities should be. The Shenzhen Bay masterplan offers a range of shared working spaces in both dedicated buildings and integrated in the public realm. The dedicated co-work buildings are spread out in the masterplan and offer independent access, larger floorplates, internal atriums, and access to amenities such as coffee shops, gym, and shared meeting rooms. 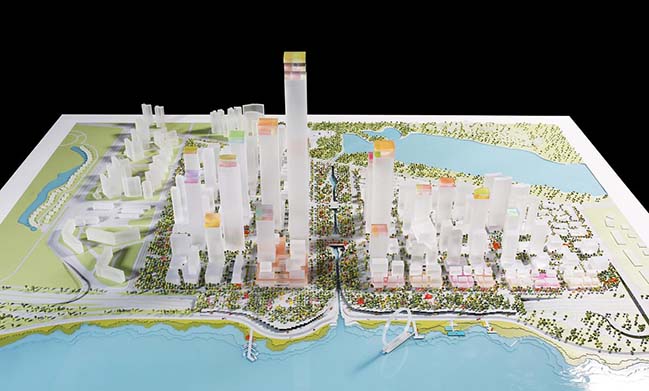 A Forest City
An ambitious plan to plant 10.000 trees within the district would shade and cool the public realm, but also reduce air and noise pollution. Together with bioswales on ground level, the trees would provide a forest-like habitat for birds and insects.

Henning Larsen will collaborate closely with other two winners and the government to refine the design and propose a coherent final masterplan vision. 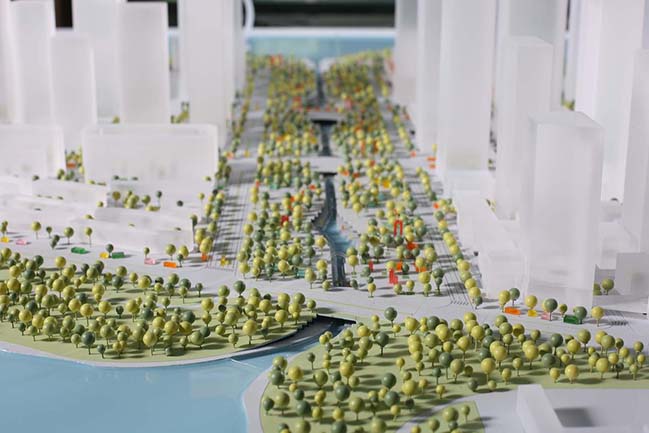 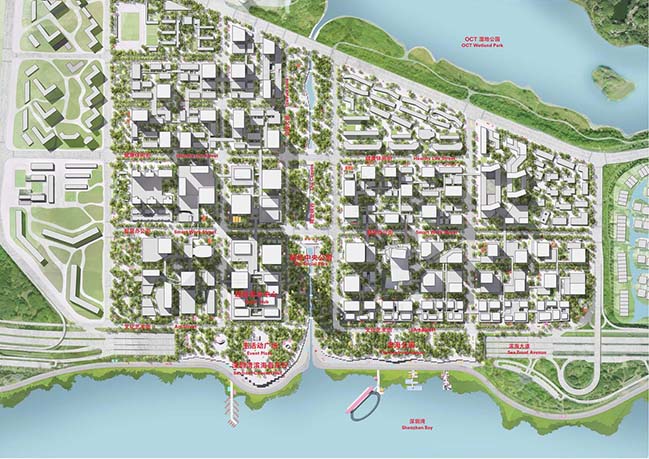