Herzog & de Meuron has unveiled the design of the new Vancouver Art Gallery. The project has visibly evolved over the course of the last five years. 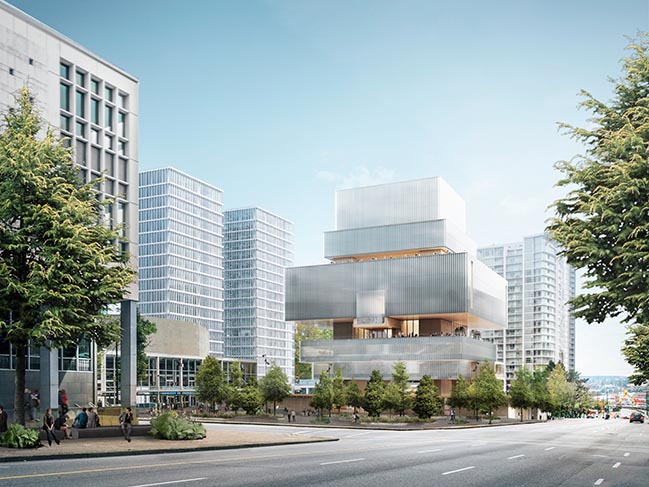 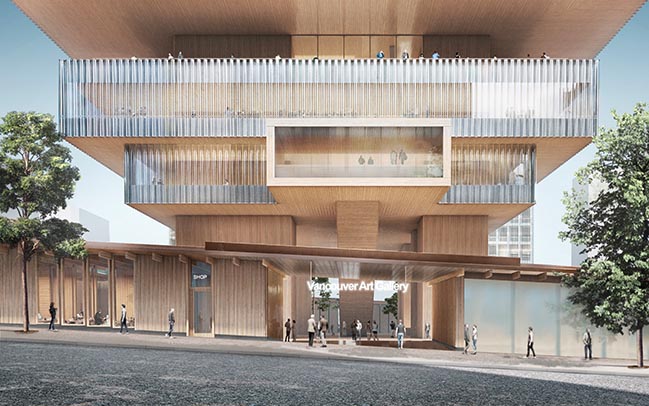 The largest-ever single private donation to an arts and culture organization in British Columbia secures the continuation of a museum project which started off in 2014. The unprecedented gift of $ 40 million was made by the Chan family, which has a long-standing history of supporting education as well as arts and culture institutions and programs.

“The new Vancouver Art Gallery is a vertical building, seemingly spectacular at first sight, with an arrangement that resonates with the place where it is built. It offers ample outdoor spaces that are sunny in summer and protected from rain in winter, to suit the climate and life in British Columbia. Visitors to the building will be able to perceive Vancouver’s urbanity and its amazing natural setting in many different ways.”

"Together with our team of BC experts and our client we defined the building to a much higher degree: the galleries, classrooms and reading rooms, theatre, restaurants and shops, and all the public outdoor spaces have progressed a lot. The new Vancouver Art Gallery is close to reality." Herzog & de Meuron says. 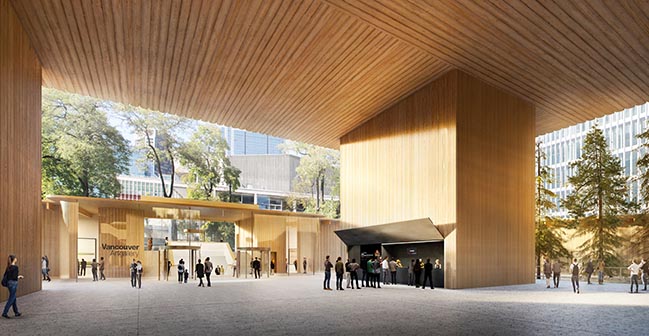 The Site - Larwill Park, the site of the new Vancouver Art Gallery, is one of the last unbuilt city blocks on Vancouver’s Downtown Peninsula. The new site is situated seven blocks east of the current Gallery’s home on West Georgia. It is surrounded by public institutions and is a key location that connects the west and the east of the peninsula linking Yaletown and Central Downtown to Gastown and Chinatown. It is an upcoming and vibrant area with many new businesses, cafes and popular restaurants.

The Architecture - The proposal for the new Vancouver Art Gallery is a sculptural, symmetrical, upright building. From an urban standpoint it is a classical type: a recognizable public building along a prominent boulevard. The building has both a low and a tall component. The low component addresses human scale and street life, whilst the high one offers public visibility within the vertically dominated Downtown Peninsula.

The low building densifies and activates the public realm around the new Vancouver Art Gallery by providing an active and accessible, continuous street front. The building contains entrances to the courtyard from all four surrounding streets. It also responds to the topography along West Georgia: the building’s roofline follows the slope of the street, resulting in a building that is consistently low throughout. In scale and materiality, it echoes the low wooden structures of early Vancouver, including those that framed Larwill Park until their demolition in the 1950s. 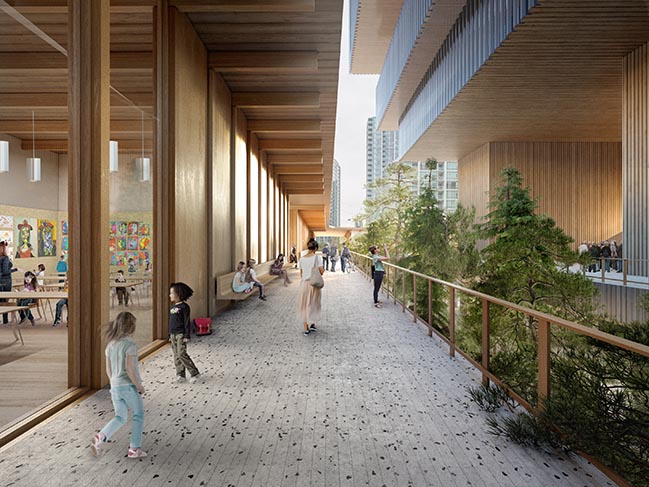 The courtyard is open to the public, an urban space where museum-goers and others crisscross and encounter one another daily. It is also a place for a variety of artistic practices and experiences, from art installations and performances to concerts and evening cinema programs. The cantilevered roofs of the one-story structure and the main building rising above the courtyard offer ample covered outdoor space, needed and welcomed during the relatively mild but wet Vancouver winters. At the same time the courtyard receives enough sun in spring and summer, an equally important factor to ensure an enjoyable outdoor space in British Columbia. The Gallery courtyard preserves the powerful legacy of Larwill Park as an active open civic space.

Exhibition galleries (one of which is free to the public), the Resource Centre for research, library services and artist archives, a café and the gallery store are situated around the courtyard. They can all be accessed not only from the courtyard but from the street as well.

The Gallery lobby below the courtyard is accessed by a sweeping ceremonial staircase between Cambie Street, the courtyard and the lobby. A suite of galleries and education studios unfold around the lobby. Two densely planted sunken gardens bring nature and light into the lobby and the galleries. Some doubleheight galleries rise up to street level, allowing for another form of daylight and even views into the art spaces from the street.

Jacques Herzog says “The urbanistic concept is based on the contrast between the low-rise framing along the street block and the taller and more sculptural building in the middle of an open and accessible garden and square.The low-rise wooden building along the street is inspired by how the streets in Vancouver were built in earlier times. The modest, almost domestic scale will enhance the character of openness and visibility for everyone.” 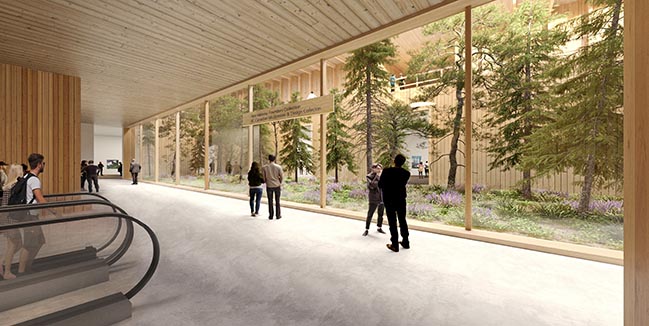 The tall building is an upright symmetrical figure, sculpted to express its inner life and to respond to the local climate. The building rests on four cores, rising 40 feet above the courtyard. The arrangement of the vertical stack allows the sun to reach the courtyard level by minimizing the mass at the bottom and maximizing it in the middle. Generous setbacks and overhangs alternate creating both covered and open terrace spaces on various levels.

The vertical gallery tower adds a public dimension to the Vancouver skyline due to its varied programming. The auditorium, large gallery suites, the public restaurant and the day to day work spaces are all housed in the vertical stack and activate the structure around the clock.

The lower two levels within the stack are mostly transparent, housing the Auditorium, its lobby, and Gallery offices. Above the two lower levels, in the centre of the vertical structure, the building steps back forming a continuous terrace covered by a two-story cantilevered rectangular volume. The main share of gallery suites are housed in this large volume (levels 5 and 6). These levels are largely opaque with precisely placed openings offering views to the city and natural surroundings from the gallery spaces within. Above the gallery suites (level 7) is the public restaurant and terrace offering uninterrupted views of the city as well as the ocean and mountains beyond. Above the restaurant, the building rises another three stories, reaching the maximum height allowed on the site. Within these smaller volumes further flexible art spaces will be housed.

“The museum will offer a wide range of very different gallery spaces – different in size and proportion, different in light conditions and views they offer, but also in their materiality and their positioning within the topographic complex of the museum.” Pierre de Meuron says 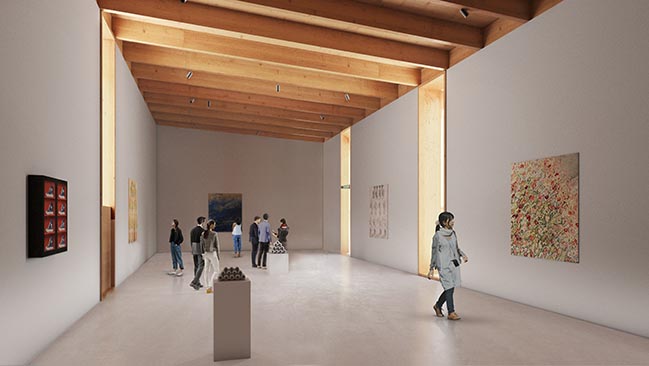 A variety of art spaces are distributed throughout the museum. Large suites are located both around the below-grade lobby and at levels 5 and 6. Smaller exhibition spaces are dispersed around the courtyard and at the terrace on level 4. The upper levels also feature education studios with easy access to the galleries. The galleries differ in height, proportion and size. All gallery levels provide natural light and views to either the courtyard, the neighborhood or the city and the spectacular landscape beyond. The variety of gallery spaces responds to the need for specificity and difference to display a collection as multifaceted as that of the Vancouver Art Gallery. Secondly, the variety addresses the wide range of anticipated temporary exhibitions, and takes into account the many forms of current and future artistic practice.

Wood and glass are the materials of Vancouver. In the early 20th century, Vancouver consisted primarily of low-rise wooden structures. Over the last three decades, the city and in particular the downtown peninsula has transformed into a vertical city made out of glass clad towers. The new Vancouver Art Gallery will use both wood and glass in a complementary fashion.

The low building, which delineates the streetscape from the courtyard, is a wooden structure. Cantilevering roofs protect the wooden facades and provide cover to passers-by and museum visitors. Wooden structures are always made out of individual elements with dimensions dictated by the size of a given tree and therefore are always the sum of many individual parts. In the low courtyard building, wooden beams, posts, boards and window frames are all expressed and legible as individual wooden elements. These elements give texture to the low building and provide a domestic quality not usually associated with large institutional buildings. This carefully detailed structure is what the visitor will first encounter when arriving at the new Vancouver Art Gallery - a welcoming, warm and approachable wooden building.

Christine Binswanger, Partner in Charge, says “The project for the new Vancouver Art Gallery has a civic dimension that can contribute to the life and identity of the city, in which many artists of international reputation live and work. The building now combines two materials, wood and glass, both inseparable from the history and making of the city. We developed a façade out of glass logs which is pure, soft and light and placed in unique relation to covered wooden terraces all around the building.” 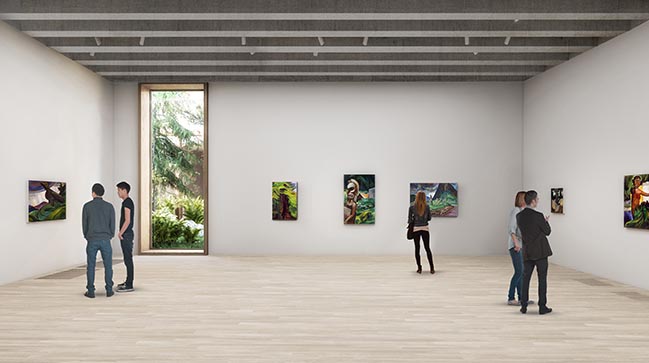 Like an umbrella, the upper levels of the tall building protect the wooden exterior spaces underneath. Its facades are finished in glass and take most of the inclement weather. Similar to the wooden facades, the glass skin consist of identifiable elements. Semi-circular curved glass elements, at the scale of large split wooden logs, are mounted next to each other.

The billowing glass elements soften the contour of the tall building and give it depth and lightness. Together, the glass ’logs’ form one continuous three dimensional glass façade. Where needed, the glass skin offers views out and daylight in, while in other areas it performs as a protective membrane over the opaque structural wall behind.

Unlike most glass facades that appear as gridded, flat, dark and reflective surfaces, the glass facades of the new Vancouver Art Gallery are detailed to ensure that no metal frames are expressed. Only glass is visible.

The soffits and recessed facades of the tall building are clad in wood. From the street looking up at the structure both wood and glass are equally present. In the vertical, the new Vancouver Art Gallery engages with the tall City of Glass. From the street, it offers a sense of human scale and warmth that often is lost in the rapid commercialization of downtown Vancouver. 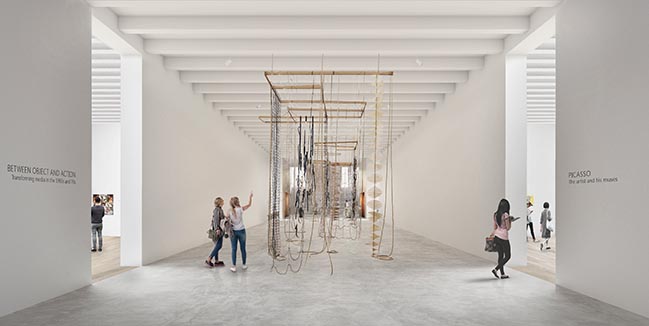 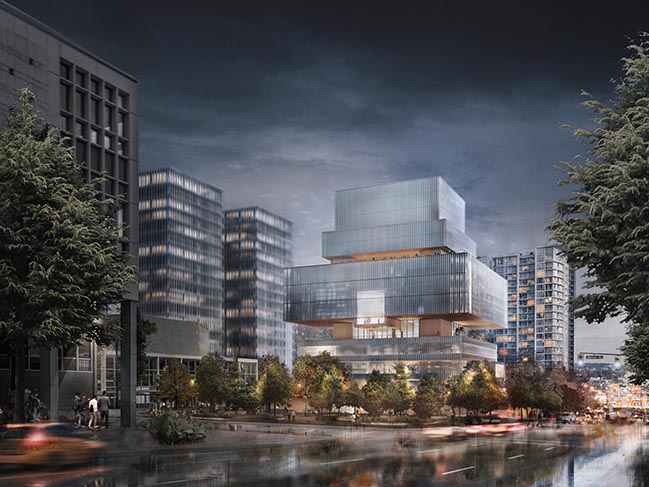 01 / 28 / 2019 Herzog & de Meuron has unveiled the design of the new Vancouver Art Gallery. The project has visibly evolved over the course of the last five years 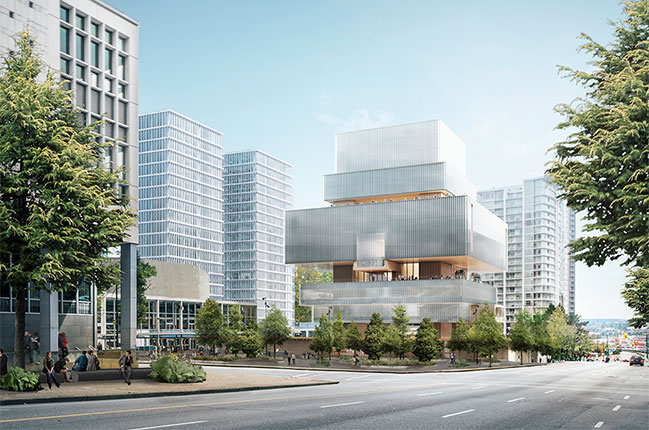