Zaha Hadid Architects (ZHA) has signed an agreement with Hyperloop Italia to jointly design its next phase of works that marks a turning point in the world of transport in the context of the IV Industrial Revolution... 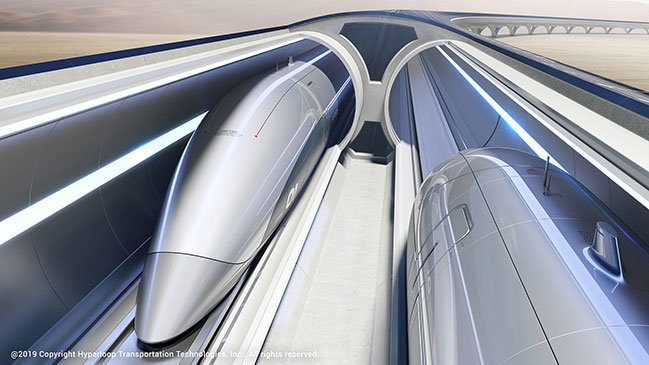 ZHA's partnership with Hyperloop Italia continues the architectural firm's three decades of experience delivering acclaimed civic and cultural buildings such as the MAXXI Museum in Rome and the London 2012 Olympic Aquatics Centre. ZHA has also built award-winning transportation infrastructure across the globe including the Hungerburg Nordpark mountain railway in Austria, Napoli-Afragola high-speed railway station, Beijing Daxing International Airport, and KAFD interchange station of the new Riyadh metro system, in addition to the landmark Sheikh Zayed Bridge in Abu Dhabi and the Danjiang Bridge currently under construction near Taipei.

Patrik Schumacher, Principal of ZHA, said: "We are looking forward to collaborating with Hyperloop Italia; marrying transformative architecture, engineering and urban planning with the most efficient and sustainable transport network to significantly improve accessibility, connectivity, and well-being in our cities. We share Hyperloop Italia's multidisciplinary approach which combines innovations in design and operational technologies with advances in ecologically sound materials and construction practices; enabling us to deliver future-resilient projects that are spatially inventive, structurally efficient and environmentally sustainable."

Bibop Gresta, founder and CEO of Hyperloop Italia as well as co-founder of Hyperloop Transportation Technologies (HyperloopTT), stated: "This agreement marks another step forward for Hyperloop Italia and the development of the fourth industrial revolution. It confirms the success of the Hyperloop Partnership Program launched last month by Hyperloop Italia to attract the world’s best talent in developing Hyperloop technologies. We are certain that Zaha Hadid Architects is the right partner to allow Hyperloop Italia to promote design excellence in architecture. Their decades of global experience in civic and transport infrastructure will be essential to ensure that Hyperloop Italia's transport hubs are intuitive to navigate, sustainable and fully integrated within their urban contexts. We are committed to building the most accessible, convenient and safest transportation system in the world using the new generation of environmentally friendly materials with a high recycled content.”

Andrea Minerdo, Chief Revenue Officer of Hyperloop Italia, agreed: "After months of detailed evaluation, we have established a partnership that will define most Hyperloop Italia projects on the Italian peninsula; connecting our communties with the fastest and most efficient transport technology."

Filippo Innocenti, Director of ZHA, noted: “Our designs look to the future with great consideration to the environment and all our communities.” Together with Gian Luca Barone, Project Architect of ZHA, Innocenti added: "ZHA has built celebrated architecture around the world, but being Italian, we are both especially proud to partner with Hyperloop Italia to provide the people of Italy with a transportation system for the 21st century."

YOU MAY ALSO LIKE:
> MAD Partners with HyperloopTT on Sustainable Transportation Infrastructure
> High-performing Urban Ecologies by Zaha Hadid Architects

06 / 07 / 2021 Zaha Hadid Architects has signed an agreement with Hyperloop Italia to jointly design its next phase of works that marks a turning point in the world of transport in the context of the IV Industrial Revolution...

THE ROOM by Nook Architects