Long and slender is a very long and narrow apartment in a preservation listed building on Rothschild Boulevard. 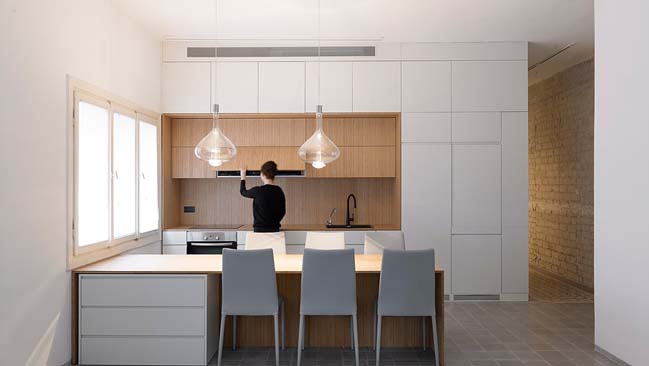 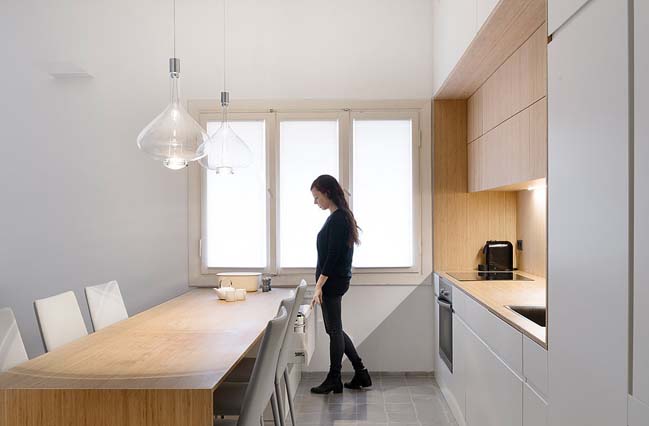 From the architects: On Rothchild Boulevard, we were requested to plan a 93m² apartment for a family of five: two parents and three children (twins [24] and an adolescent child) in a Bauhaus building with preservation status. As befits modernistic Tel Aviv structures, the apartment was built with an exceptionally high ceiling 3.20m high. The height of the ceiling influenced a vertical-type of structural design, directing our plans to take advantage of the height, not only for storage purposes (the familiar Israeli "Boydem"), and think of the apartment in terms of mass, and not only “space.”

The dining table is made of Bamboo, as the kitchen cupboards and counter top. It functions as a table for six diners on a daily basis, along with two units of mobile drawers. When necessary, it is possible to roll the drawers aside, and increase the number of diners to ten. 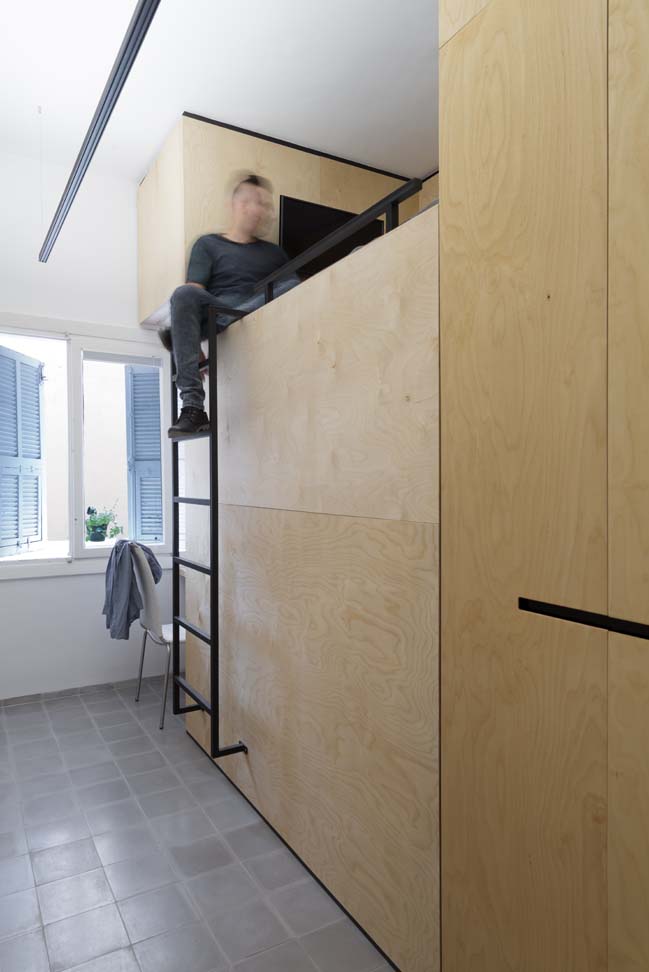 The unique Tel-Aviv character of the apartment inspired us to relate to the other authentic architectural elements we found in it: windows and original wooden shutters, walls made of plastered silicate bricks (now exposed), black iron railings and painted concrete floors, which were redesign as part of the characteristics of the apartment. 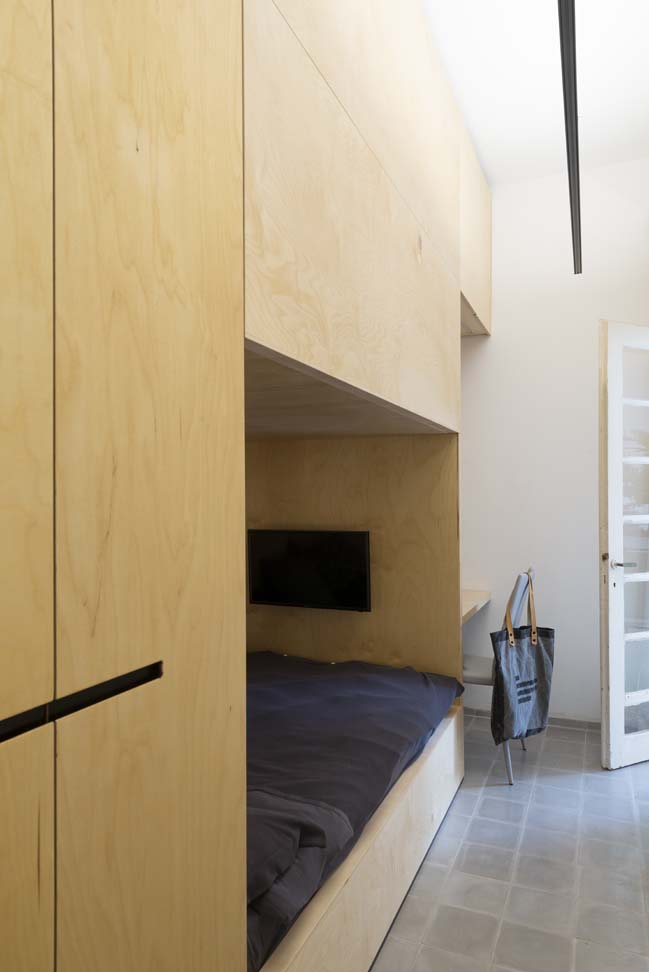 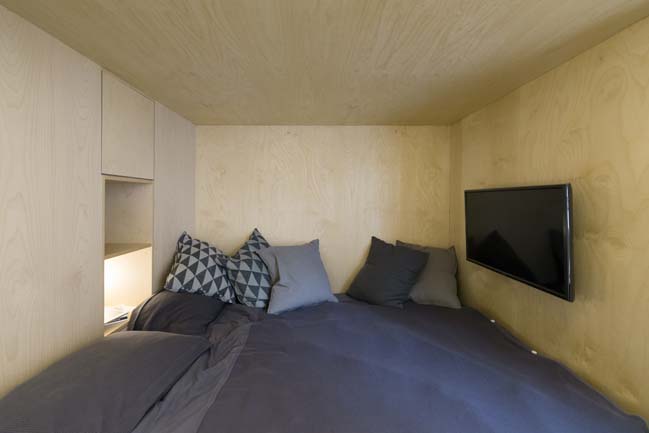 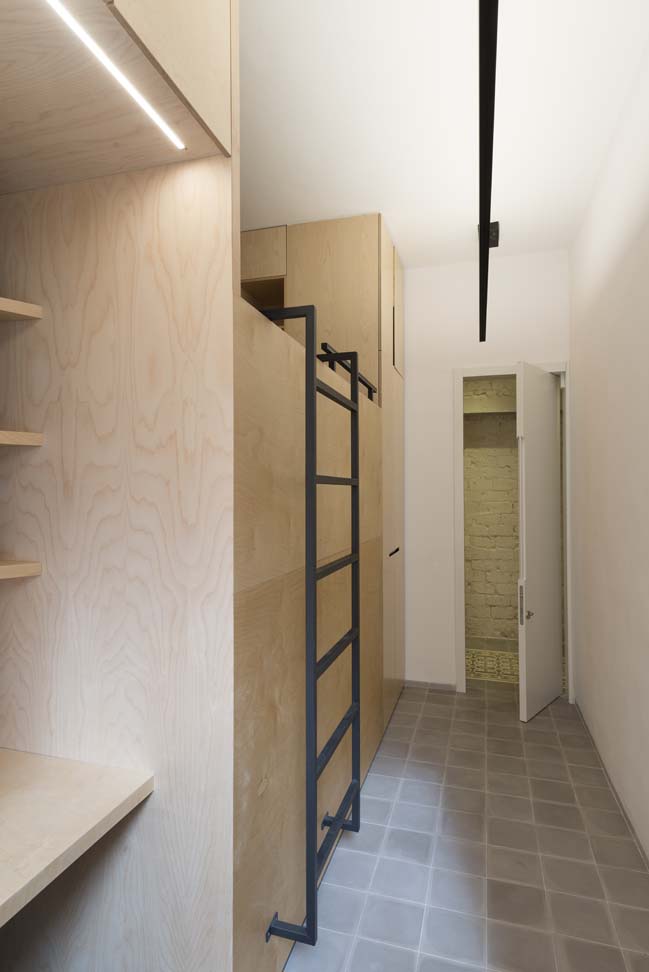 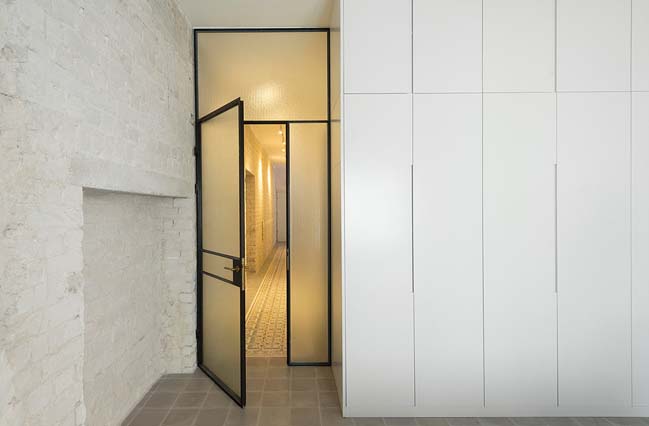 The long, high corridor extends between two dominant facades: The original wall of the house stripped of plaster and maintained in its raw state; opposite, in contrast, a new minimalist woodwork carpentry wall. 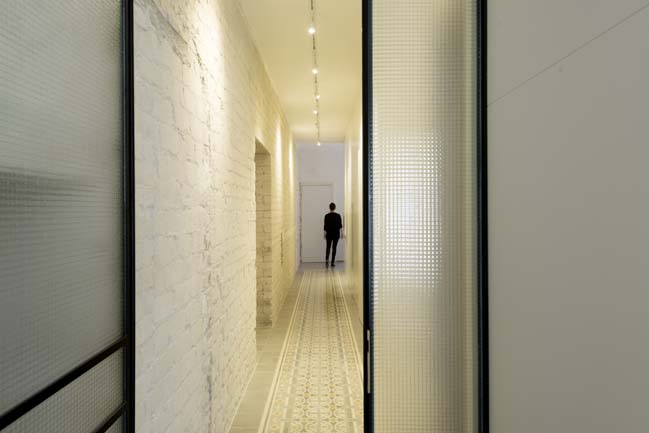 The longitudinal structure of the apartment, and the balcony facing the Boulevard, dictated the basic partition: public spaces facing Rothschild Boulevard and private spaces within the apartment. 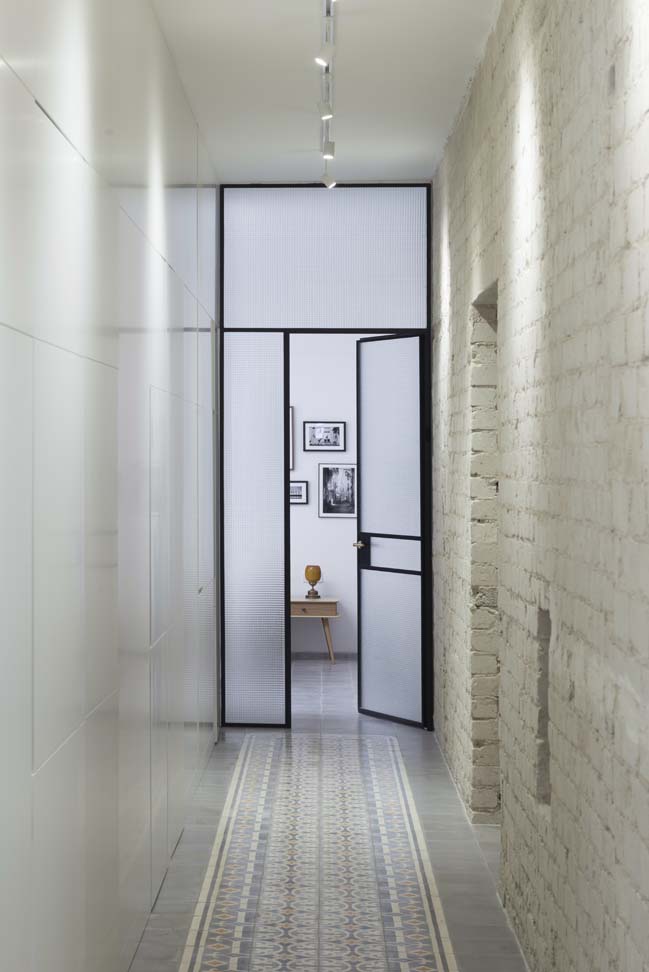 The narrow structure demanded particularly long corridors (9m in length) to enable access to all rooms. Therefore, the corridor and the exposed silicate-brick wall together became one of the two elements that directed the planning of the apartment. The second element organizing the apartment is the box-like structure with its elements of the woodwork.

At the end of the corridor, a glass vitrine leads to the parents' room, disconnecting the box from the brick wall, hinting at the continuity of the two components, and creating a limit to the corridor and the long view obtained from the entrance. 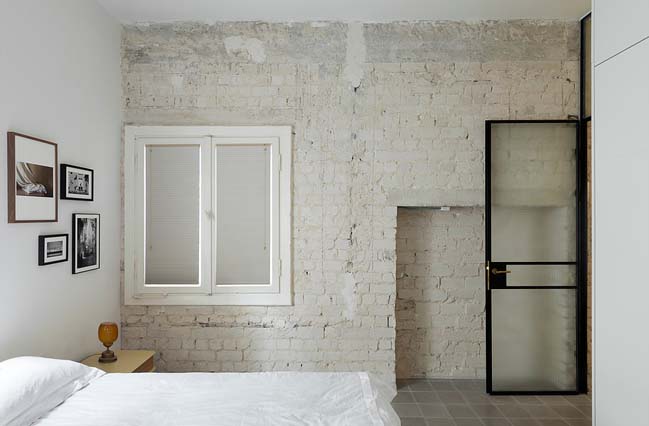 One side of the box is parallel to the exposed silicate-brick wall and the corridor and directs one to a closed facade with the five hidden doors of the three children's rooms and the two bathrooms. The box’s second side comprises the parents’ bedroom closet. Another side of the box opens into the living room. It is a shorter and more open facade where the kitchen is located. 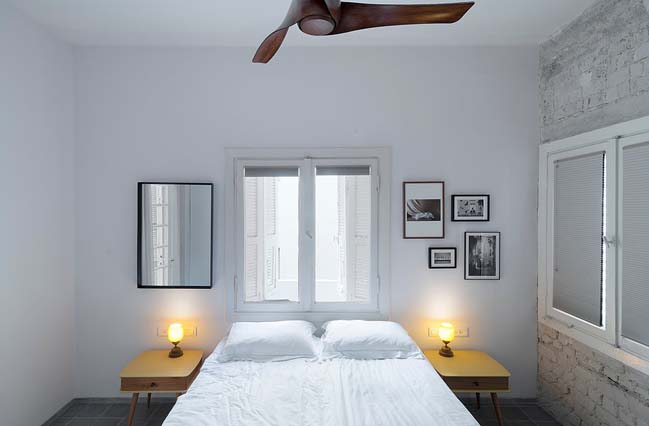 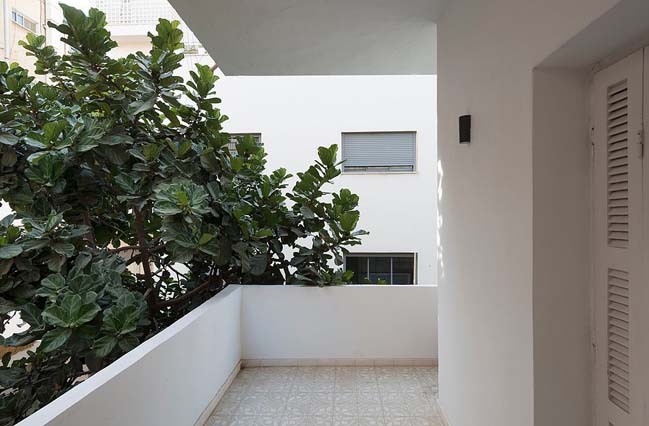 The high façade made it possible to divide the kitchen storage into high cabinets for long-term storage, and low daily storage in cupboards above the sink. The proximity of the kitchen to the living room required a clean and organized façade, so the refrigerator is also "hidden" inside of the cube.

The parents’ unique request was to question the famous "Parents' Unit" with its en suite bathroom, and instead create two identical bathrooms to serve all members of the house. 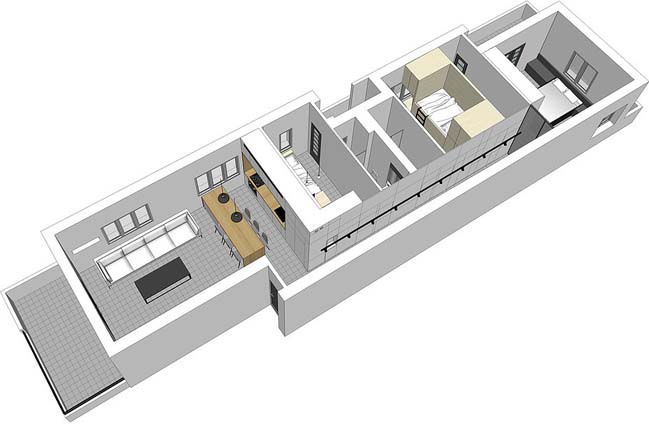 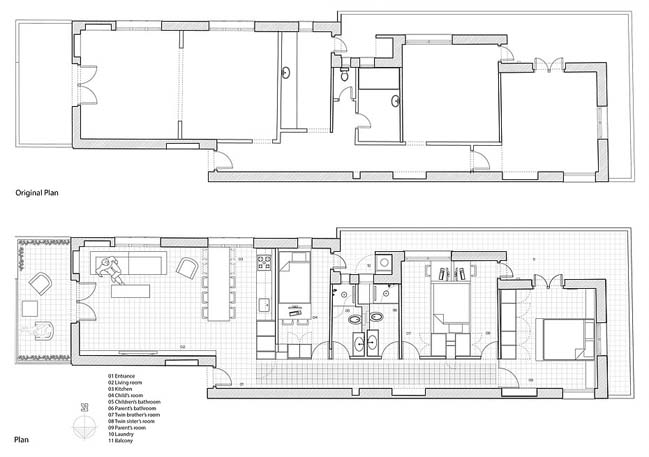 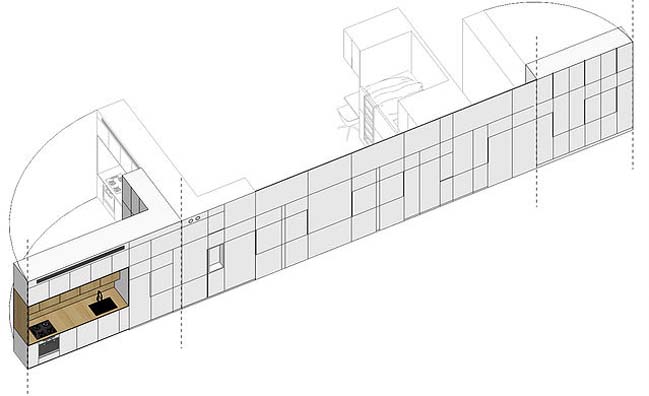 The twins share a one-room space (14m²), with a 140cm wide partition in the center from floor to ceiling and along the length of the space. The partition divides the space into two separate rooms. Each façade of the partition faces each room and contains all the room’s functions: wardrobe, small writing desk; and in the middle, the beds "inserted" one above the other. Thus, the valuable area of ​​the bed is doubled and the apartment’s height was used to maximize the mass of both rooms. 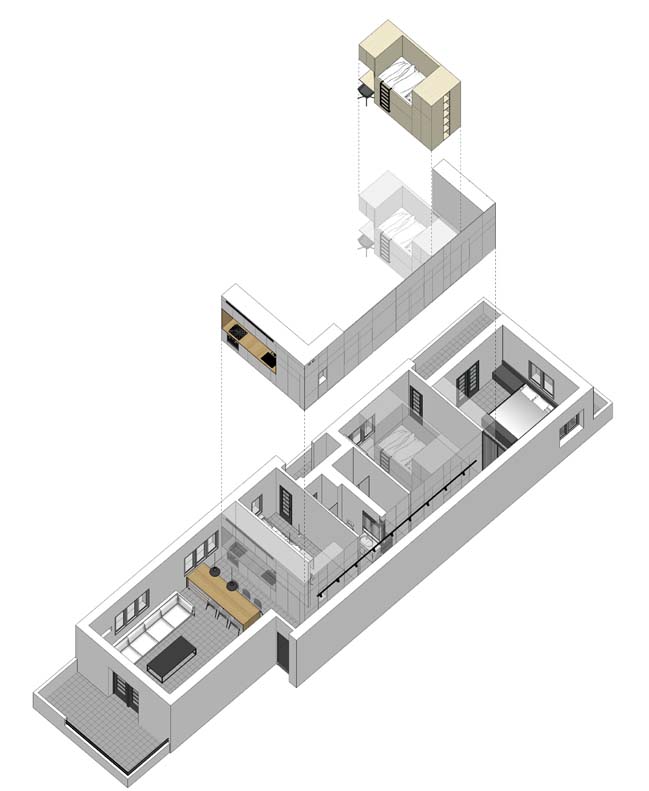