In Barcelona’s Eixample Esquerra district, what used to be the offices of an advertising agency were turned into a home. The remodelling was undertaken with the priority of reconstructing and enhancing the historical elements of the building while adapting the space to the needs of a family with 5 members and 2 dogs. 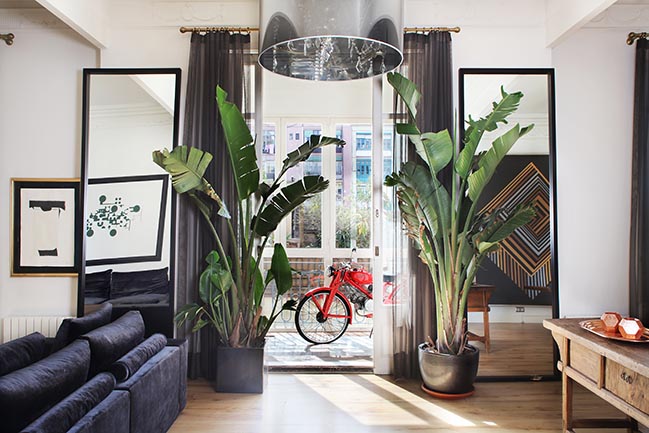 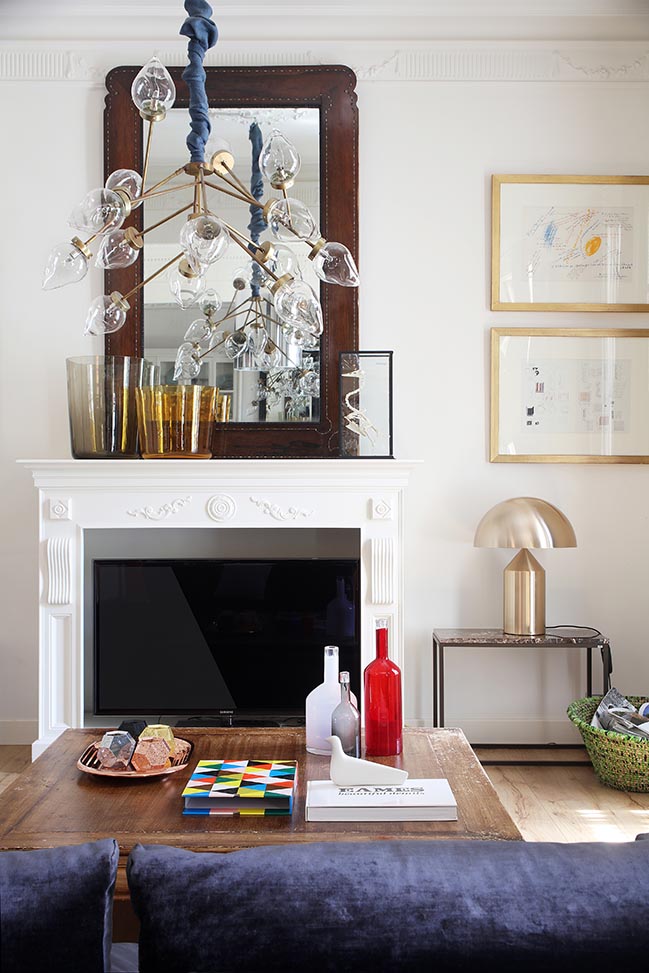 From the architect: The outcome is a cosy, spacious, light-filled home that respects the personality of the building without sacrificing elegance and contemporary furnishings. As you walk through the doorway, you find a large hallway totally painted in a deep, intense blue. A large antique mirror from India presides over this space, which is lit by a large Farooo lamp from Moooi. In one corner is a Rive Droite armchair by Cassina upholstered in mustard-coloured fabric and accompanied by a TMM lamp by Santa & Cole. 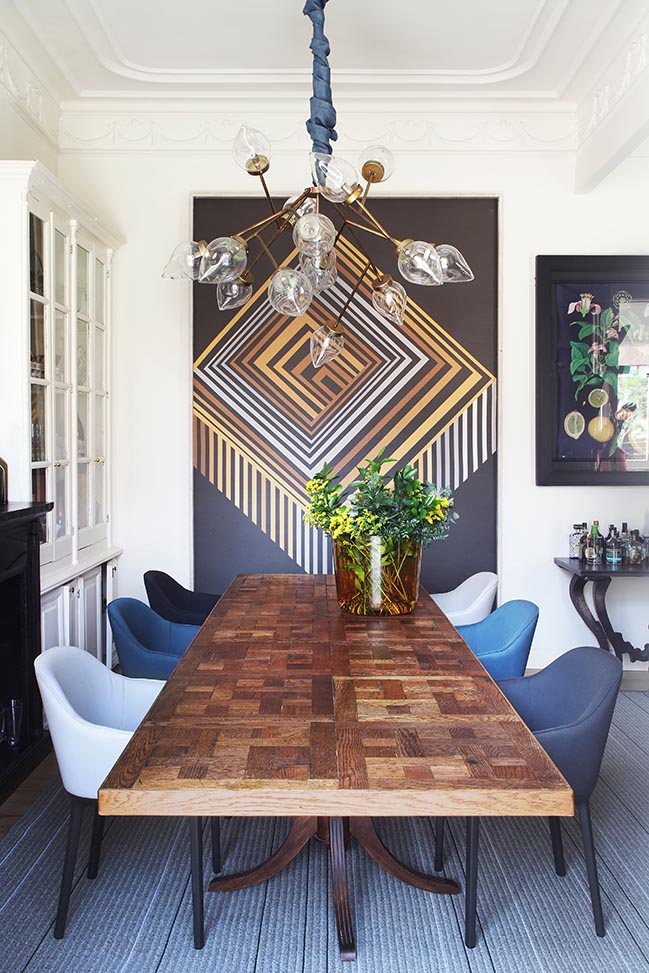 Next we enter the rest of the flat, which is filled with light and has walls painted white. In the dining-living room, under the Shade lamp by Moooi is a charming red Guzzi motorcycle that used to belong to the owner’s grandfather, which brightens the views of the inner balcony and the terrace. 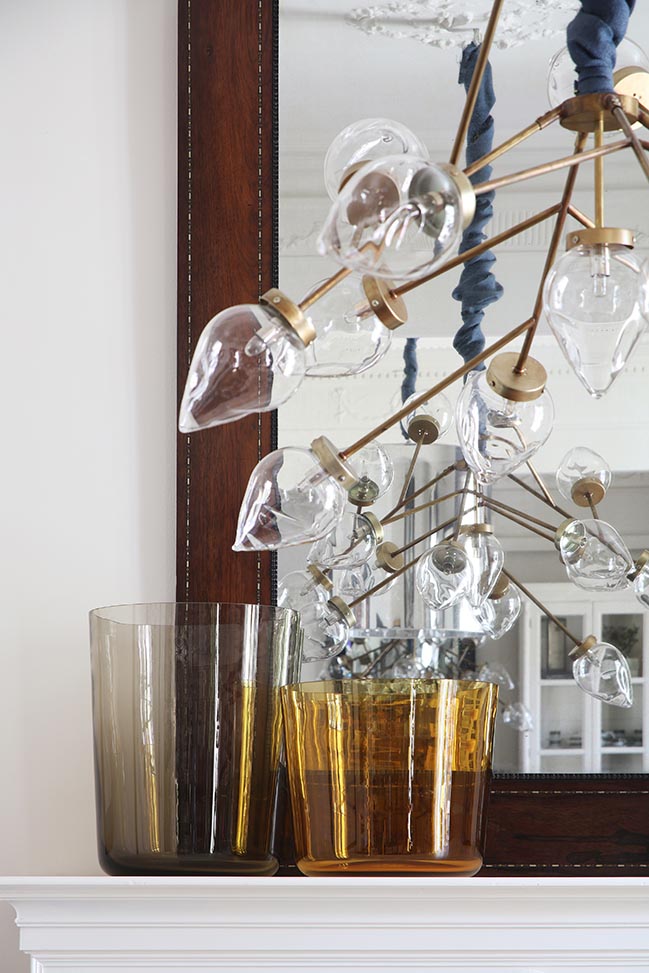 In the living room is a blue velvet sectional sofa made by Flexform decorated by pillows from Vitra and a central lamp from Moooi, all purchased at the store Idees / Lifra Contract. Presiding over the living room is a white fireplace which is used to house the television. Placed symmetrically on either side of the fireplace are marble and textured aluminium side tables from Sistema Midi which hold the gilt Atollo lamps by the designer Vico Magistretti. 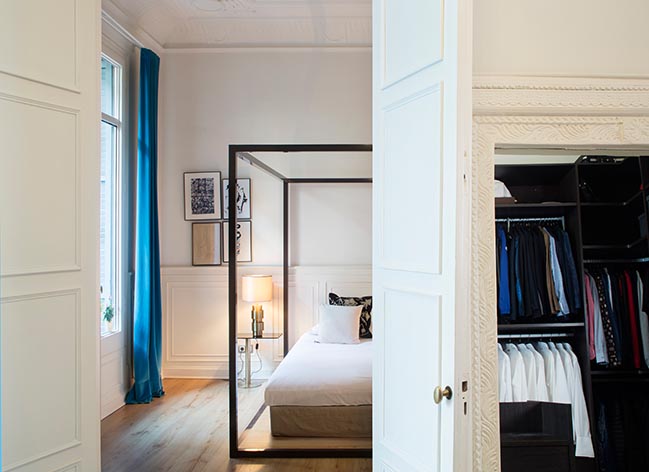 The entire flat has synthetic parquet flooring in oak. The original hydraulic tiles have been kept from the dining room to the bathrooms, bedrooms and kitchen, except for the inner balcony where the motorcycle is. Their perimeter is paved with rustic parquet in order to provide contrast and rhythm to this space which is drenched with sunlight. 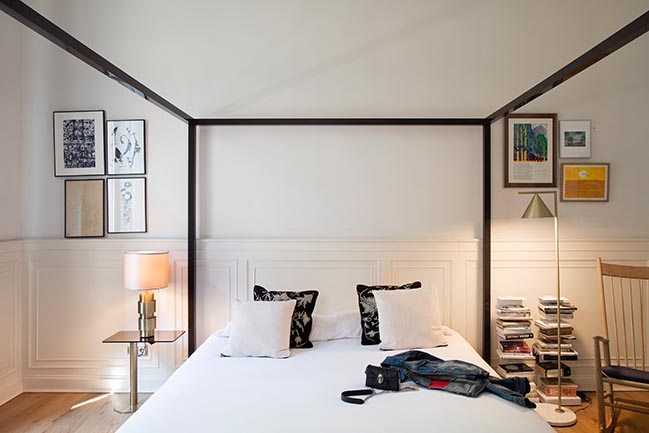 The walls are peppered with paintings acquired all over the world depicting a variety of themes. Most of them are abstract, such as the one in the dining room, a large painting purchased in Paris on the banks of the Seine. There is also a beautiful kimono from last century and other works that the owners have acquired on their journeys to Asia. 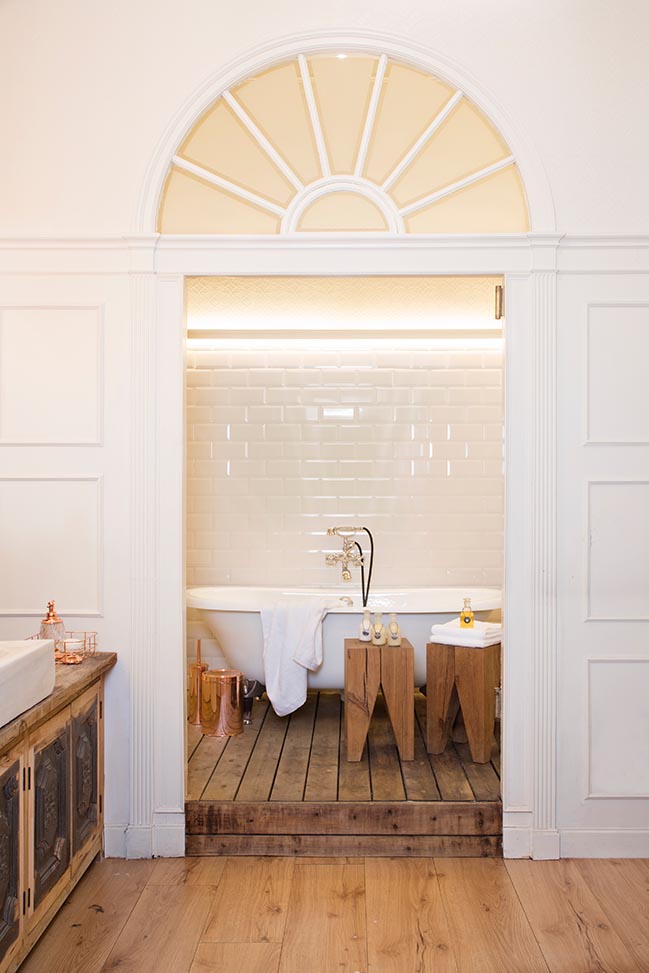 In the dining room, there is a dark wood fireplace with two symmetrically placed white-painted glass cases, both purchased at an antique store. The table measuring 4.4 metres is made up of restored Versailles-style marquetry, along with Soft Chair armchairs by Vitra designed by the Bouroullec brothers combined in different colours. On the floor, the rug echoes the colour range of the chairs. Everything was purchased at Idees / Lifra Contract. 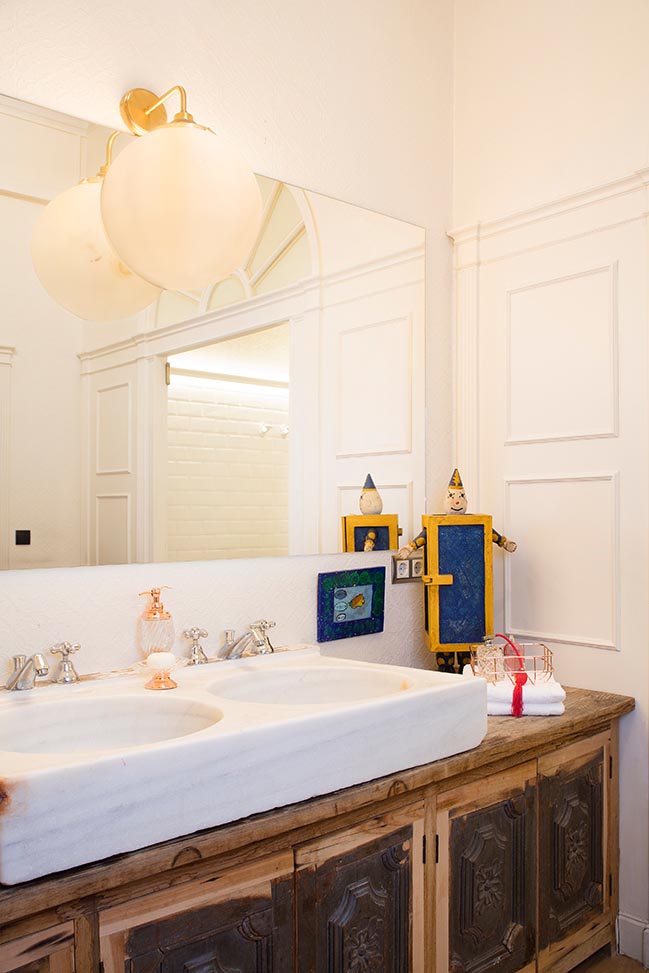 Since the flat is on the first floor, it has the privilege of having a 300 m2 terrace right in the heart of Barcelona’s Eixample district. To make it warmer and more inviting, a wood plank floor was installed, and the walls inside the bower were clad in wood to confer greater privacy. The colourful metal chairs from Fermob bring different colour combinations to life, as do the giant cages, also from Idees. 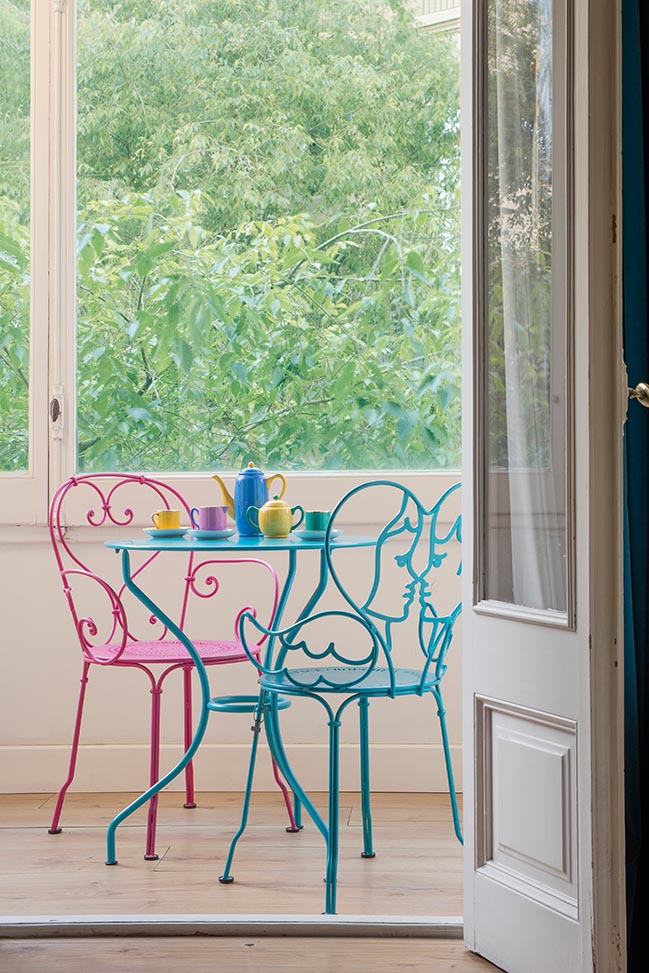 The master bedroom has a dressing room and a small inner balcony. The original mouldings and ceiling roses envelop the space featuring a canopy-style bed from Sistema Midi de Mb made of aluminium with a textured brown finish. The bed is not draped with the canopy and there is no central light so that the owners can see the ceiling roses from the bed. 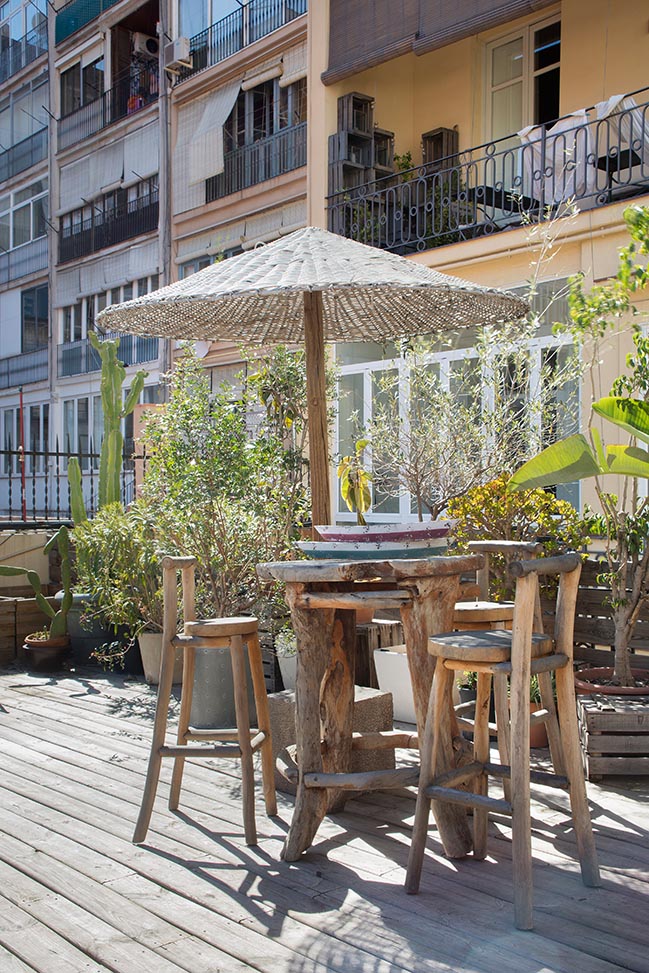 On the windows, long turquoise velvet curtains from Creátion Baumann bring a touch of colour to this warm, light-filled room. The nightstand by Tom Dixon along with the Flos light and the rocking chair from Fredericia were also purchased at Idees / Lifra Contract. The wall panelling in the suite was painstakingly reconstructed during the remodelling; it had been totally destroyed, and efforts were taken to be as faithful to the original as possible.

The master bathroom is made up of two spaces: an initial room which houses the sink, which was fitted with a custom cabinet made from mouldings from doors purchased at an antique shop. The faucets are made of antique marble and were purchased at a flea market in France. The entire wall and ceiling of the bathroom initial room is covered with textured flowered white wallpaper, the same Ral as in all the walls in the flat. 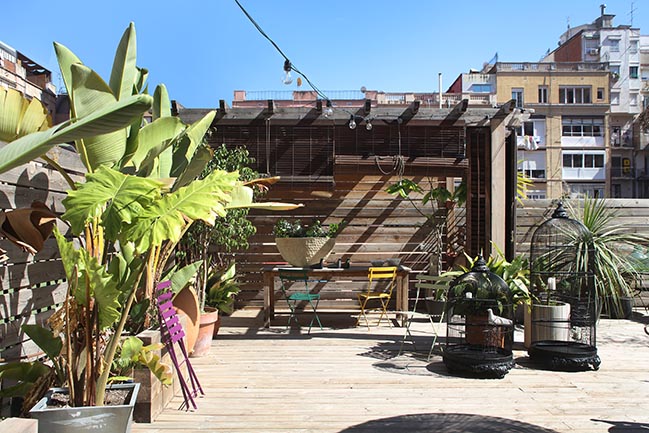 Next, the toilet area is covered with floor tiles that are bevelled on the bottom. LEDs provide warm light around the perimeter, and the textured wallpaper continues in order to provide continuity with the initial room. A classically-styled bathtub from Roca steals the spotlight, while the shower and toilet are concealed behind side walls.

The original kitchen, which is quite small compared to the size of the flat, has been kept but details have been added like covering the walls with the white textured wallpaper and concealing the exhaust hood with aluminium tubing, wood and glass to make this small space warmer and softer. This is an important factor, because the exhaust hood is in the middle of the kitchen island. The stove and refrigerator are from Smeg, and the 4 mega-bulb pendant lights are from &Tradition. Everything was purchased at Idees / Lifra Contract. 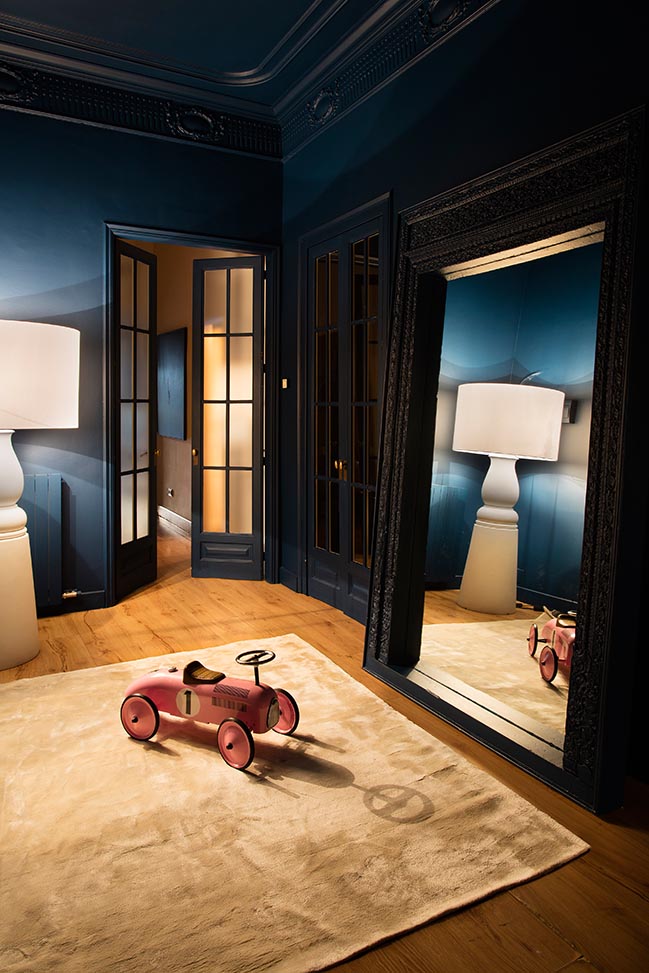 02 / 27 / 2019 In Barcelona's Eixample Esquerra district, what used to be the offices of an advertising agency were turned into a home. The remodelling was undertaken with the priority...