Architecture Office​, an architecture firm based outside of Austin, Texas, has designed the flagship work environment for​ ​ShareCuse​, a new coworking space located within the historic 1928 Syracuse Building in the city’s downtown district. 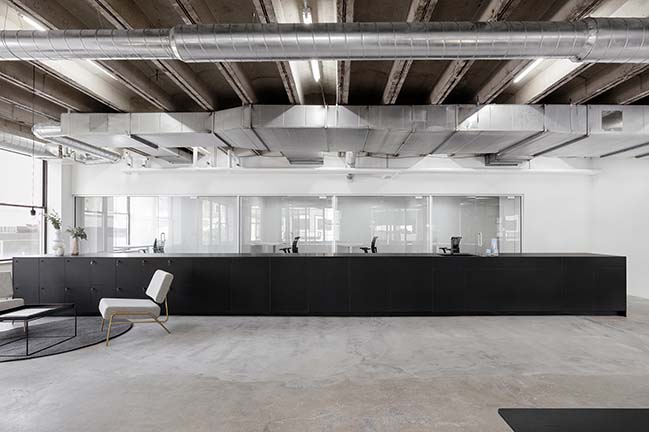 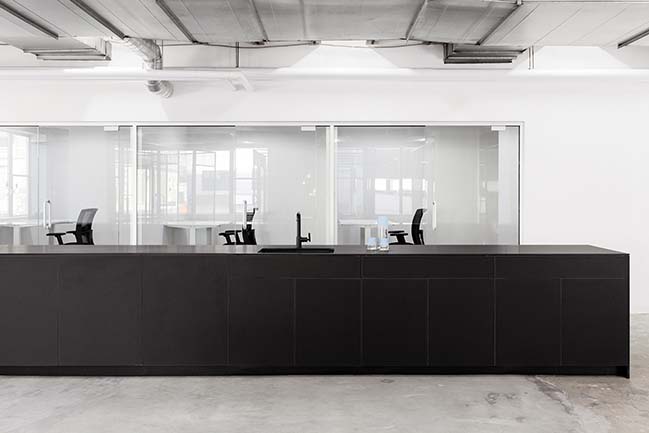 From the architect: Drawing from the edifice’s rich 90-year history as an office building, and the firm’s own research into a range of workspace typologies, the design for ShareCuse explores, expands, and reinvigorates the notion of a cubicle. 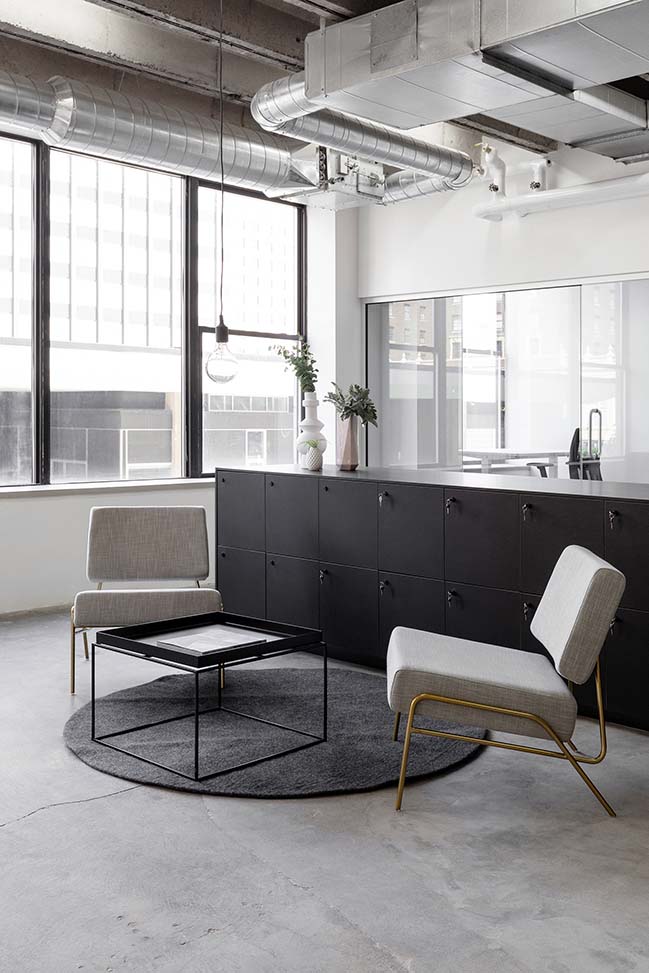 ShareCuse accommodates 25 members, and is set within a 3,200-square-foot room on the second floor of an existing concrete and steel building. Architecture Office’s design for the space is defined by an arrangement of freestanding black cubicles and a kitchen island within the interior of the space, that define a series of interstitial lounge spaces throughout the open office. Ringing the open workspace are seven private offices, a conference room and a telephone booth. 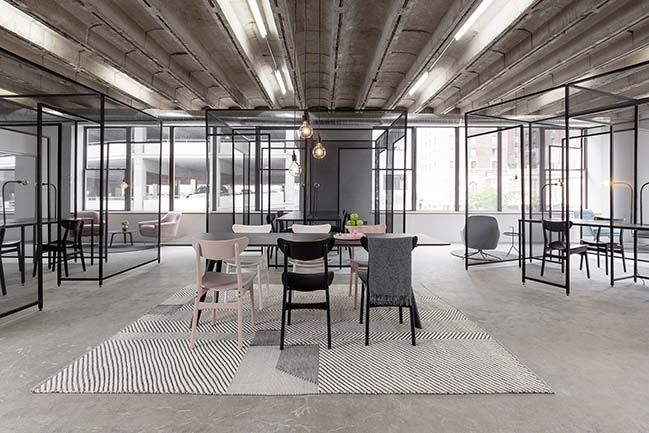 Unlike the traditional enclosed cubicle, separated by opaque half-walls from its neighboring workspace, the ShareCuse cubicles are crafted from black mesh screens that filter the appearance of the spaces behind. From a distance the office cubicles appear monolithic as single black forms. As one approaches the screens, the surfaces shift character into layers of translucent scrim that exhibit the offices and personnel within. 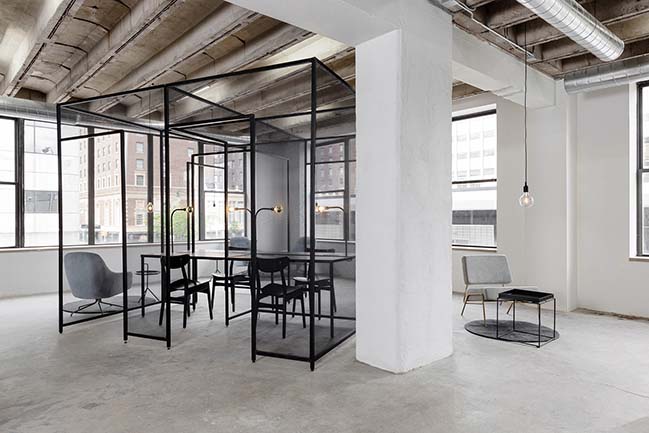 “Our aim was to design a flexible office organization that does not kill the work environment", says Architecture Office co-principal Nicole McIntosh. “By grouping the cubicle structures into quadrants, we imagine workers moving around the objects and interacting within the shared office landscape.” The arrangement of geometrically strict structures in the open workspace also serve to define unique “lounge” spaces that promote simultaneously interactive and private work environments. “[Cubicles] act as a series of minimal objects that occupy, frame, and define regions by inhabiting a larger room”, says Architecture Office co-principal Jonathan Louie. Whereas the cubicles act as a structure for working within, the long island acts as a conduit for congregation and interaction. 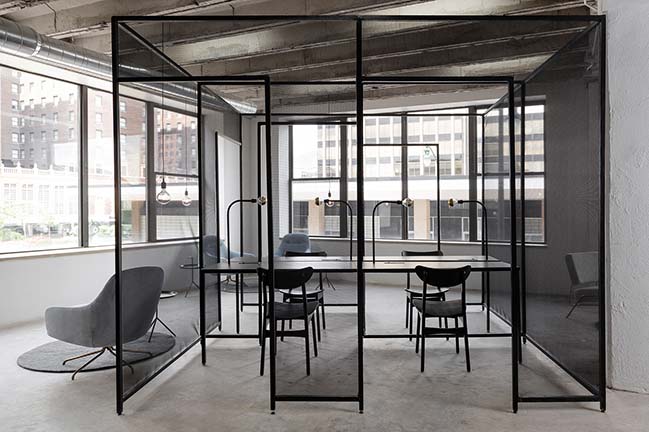 Built into the cubicles are a series of 3’ wide x 7’ high openings that allow for moments of engagement between spaces and invite people to share across workspaces. Some openings are thresholds for entry, while others act as opportunities for members working in teams to pass information or share desks. Although the cubicles and their openings are all of uniform size, the placement of the openings are different, generating variety and different interaction with their surrounding spaces. The modular cubicle can appear simultaneously open and closed, efficient and playful. 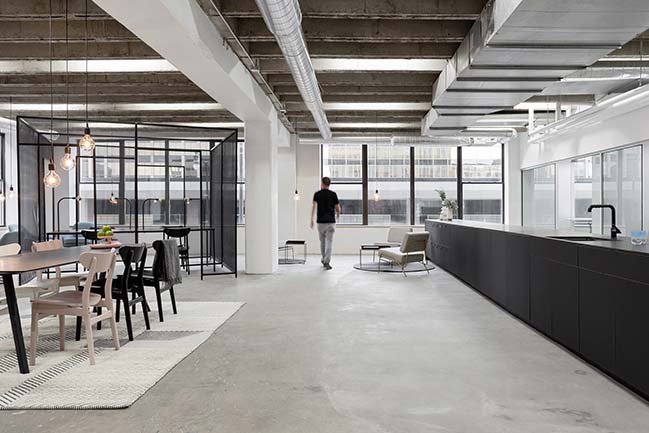 Inspired by their collection of image references including the films of Jacque Tati, as well of the work of Robert Irwin, Louie and McIntosh note that the playful variations and scrim are meant to encourage a sense of visual connection. “We were interested in understanding how we could interrupt the traditional repetition of the cubicles without subdividing them, as well as encourage connection and the relationship between singular and shared office spaces. The traditional cubicle and its half-wall fosters a semi-private working space, yet visually disconnects you from the rest of the office. We found the visual properties of the scrim interesting as a semi-private wall that appears differently from different viewpoints.” 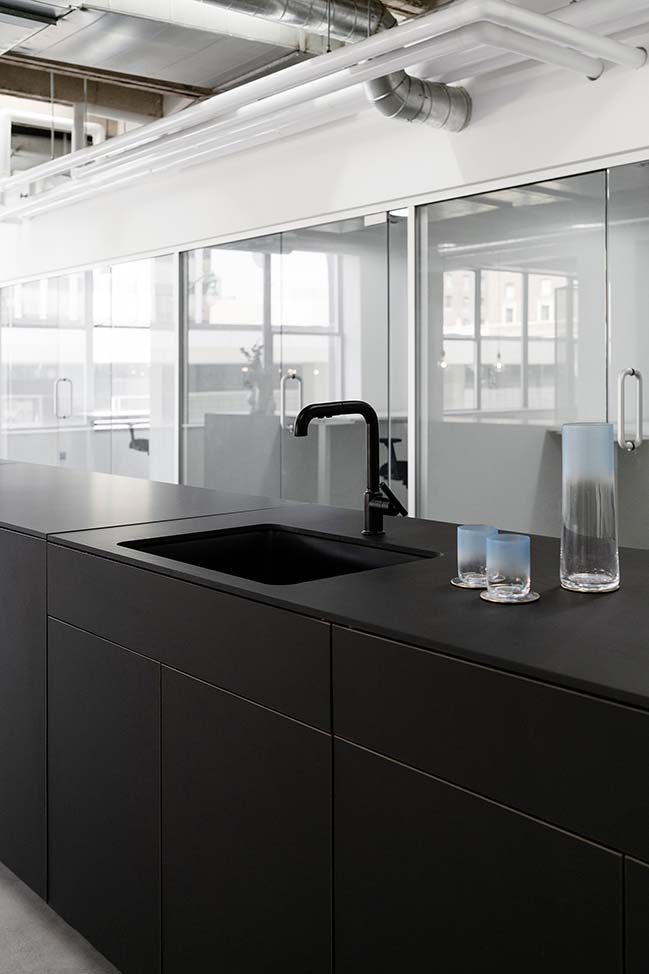 The color palette further facilitates visual connection and the modulation of flow and lounge spaces. Black cubicles, a long island, and tables sit as contrasting, minimal objects within the exposed concrete ceiling, white walls, and washed-out concrete floors of the existing building. The only accent colors are the desaturated pink, grey and blue velvet chairs with brass legs, that help to subtly articulate the different lounge areas, while not completely separating one from the other. The dark grey dot rugs mark seating areas. 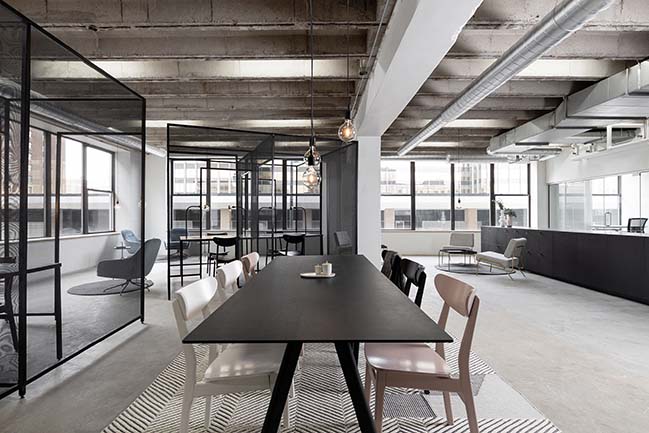 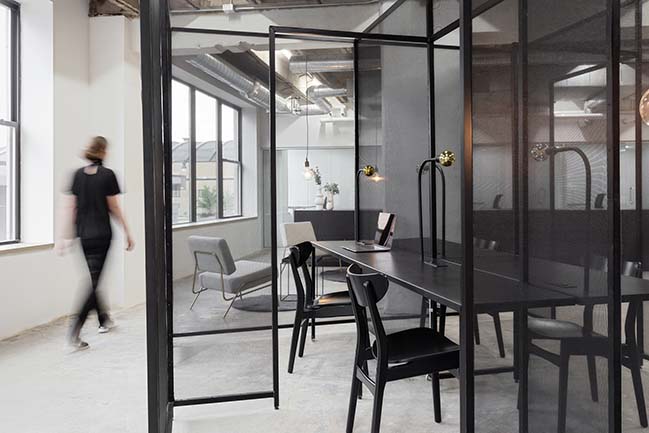 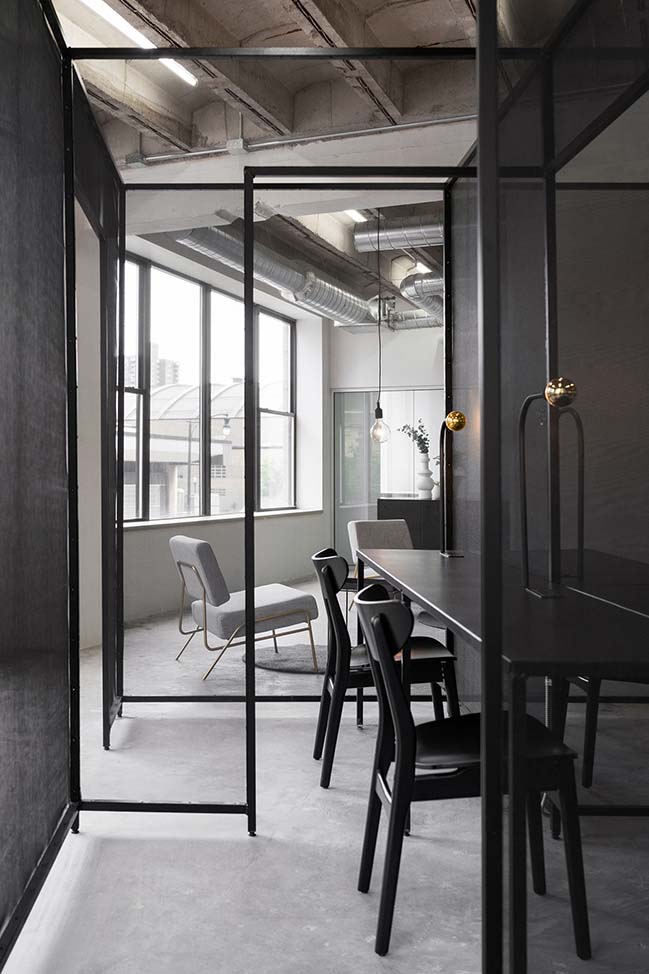 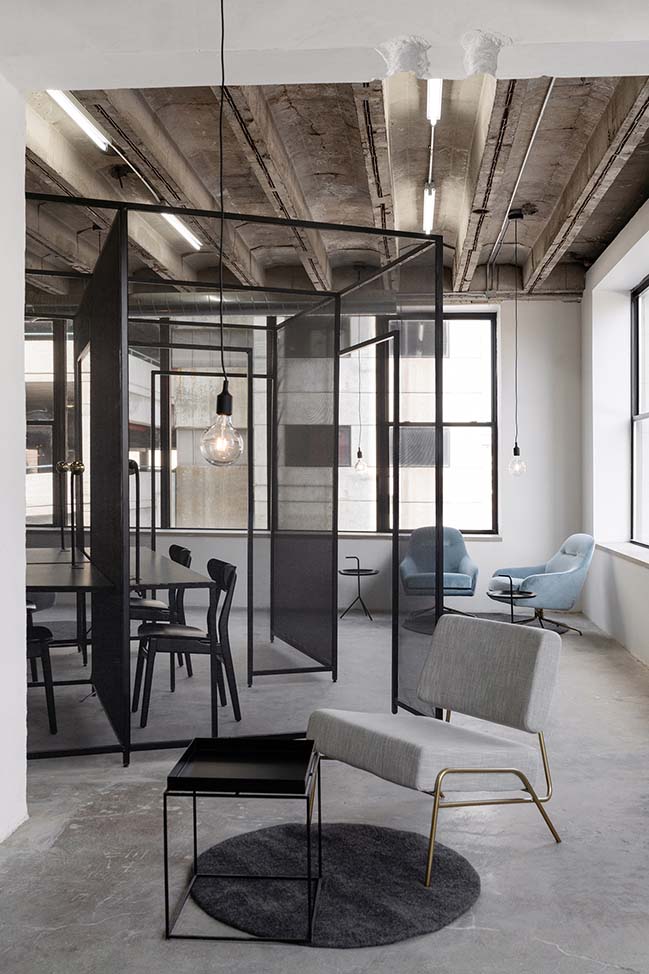 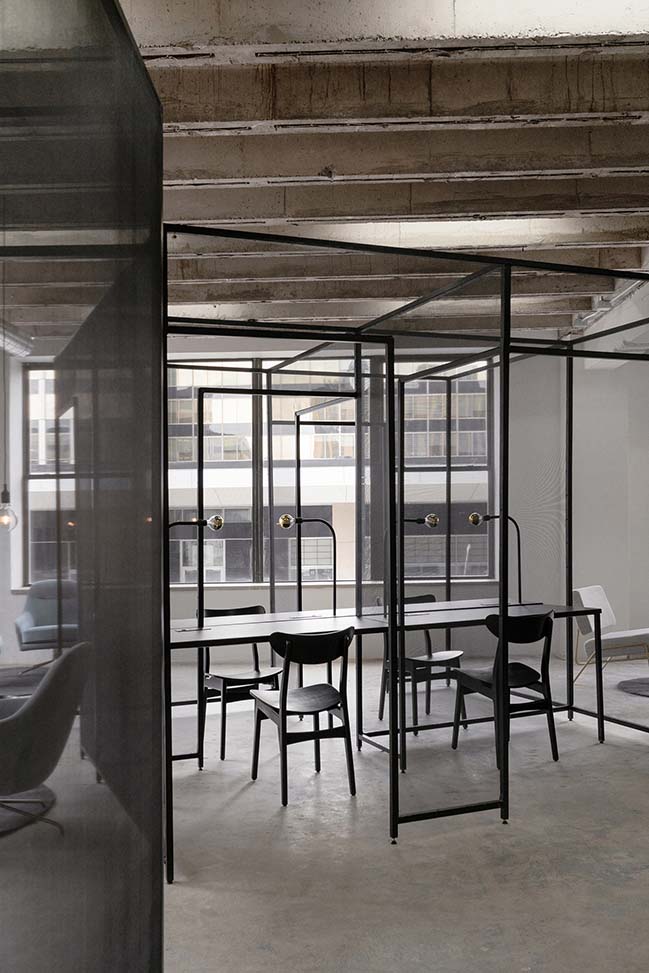 YOU MAY ALSO LIKE: HofmanDujardin transforms warehouse into lively Office Villa 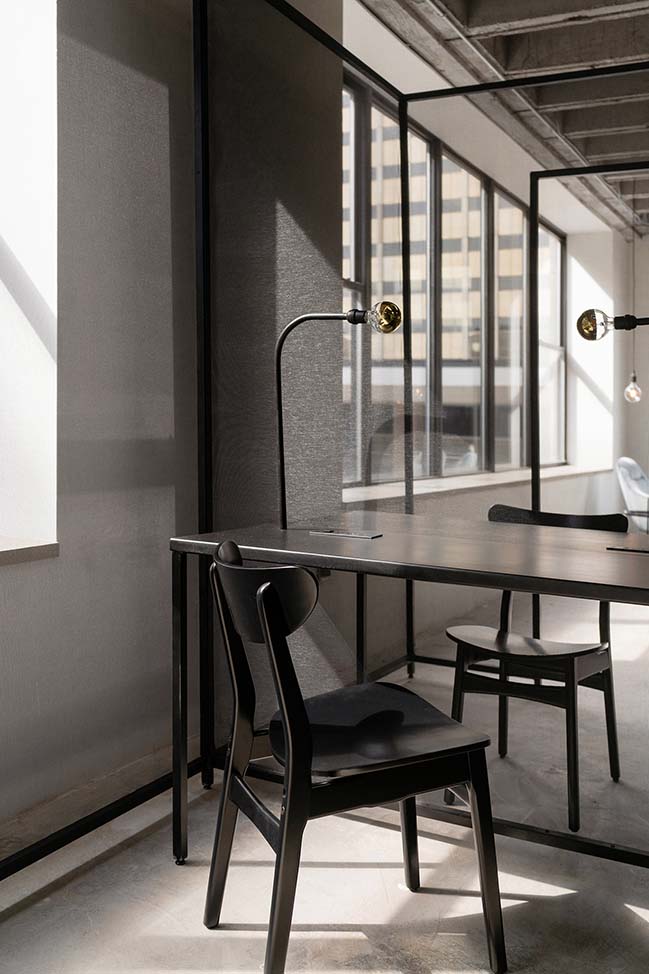 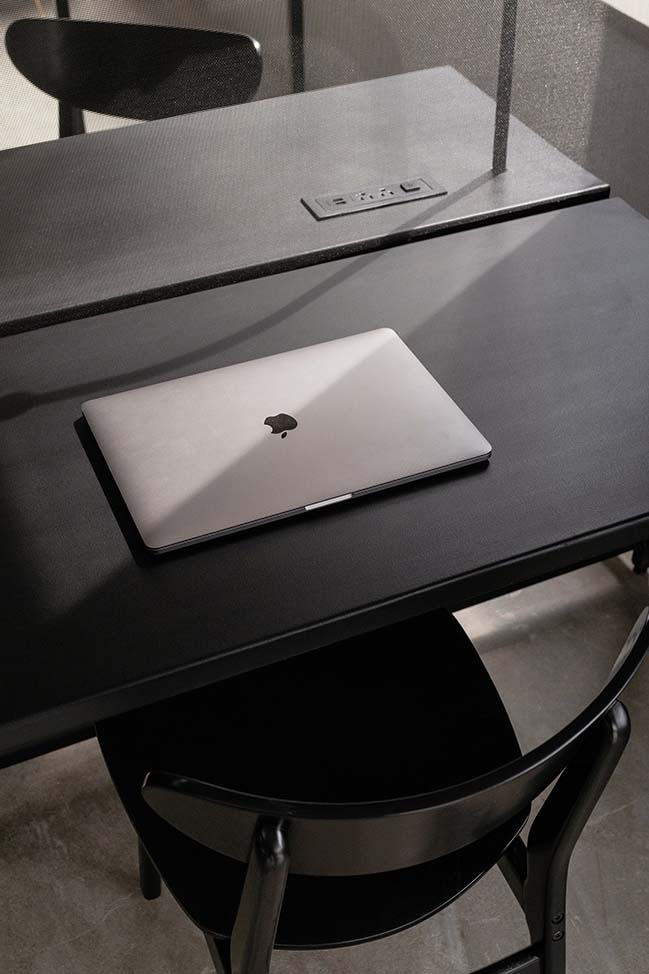 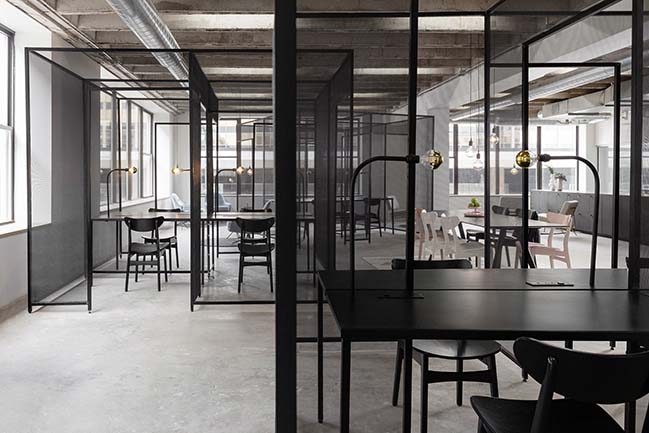 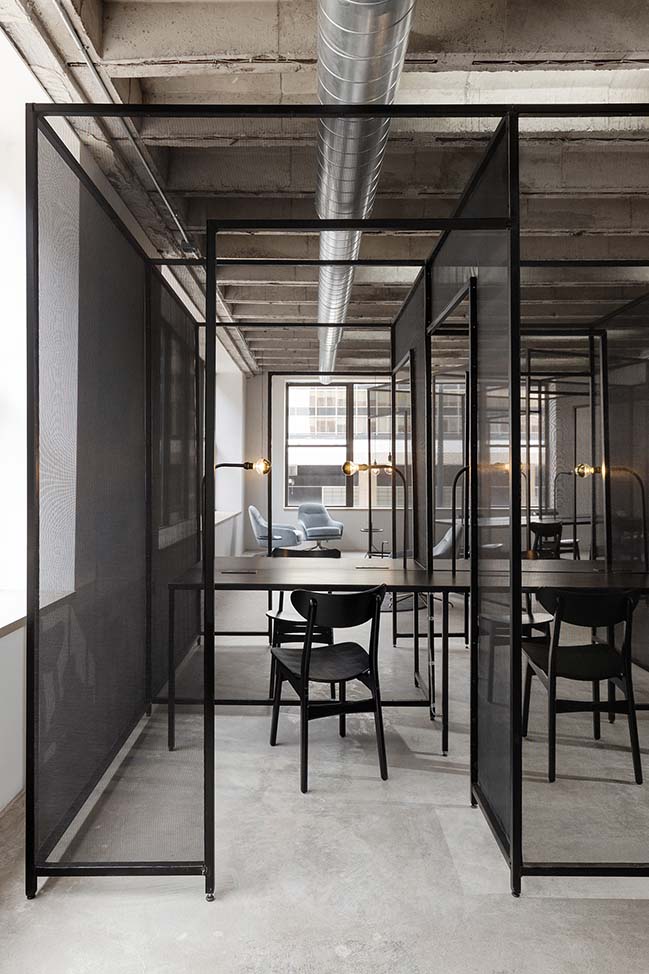 YOU MAY ALSO LIKE: Showroom and Offices DFG-Pavestone by OLA Estudio 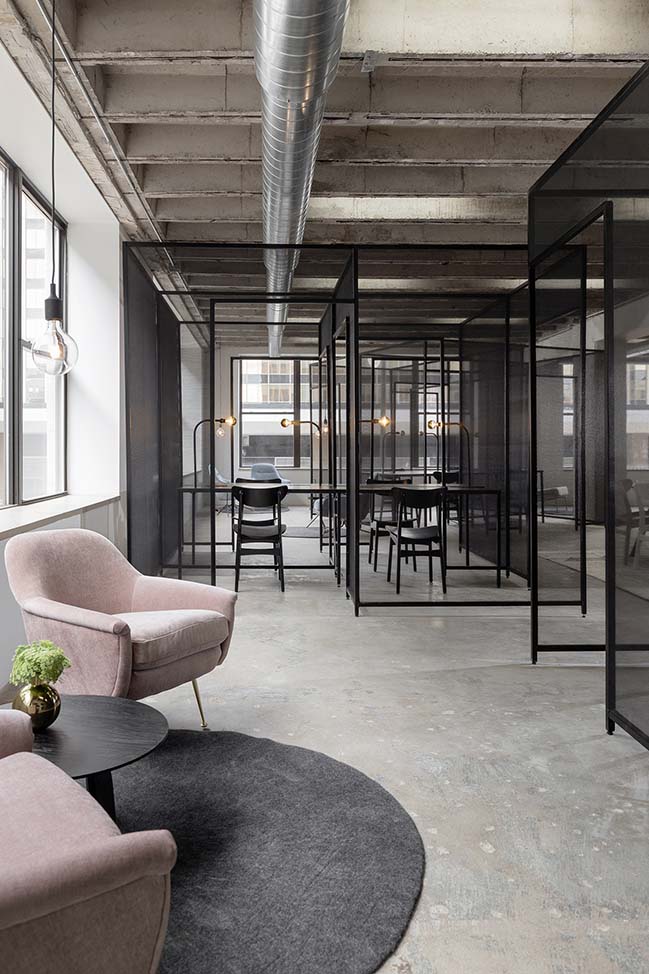 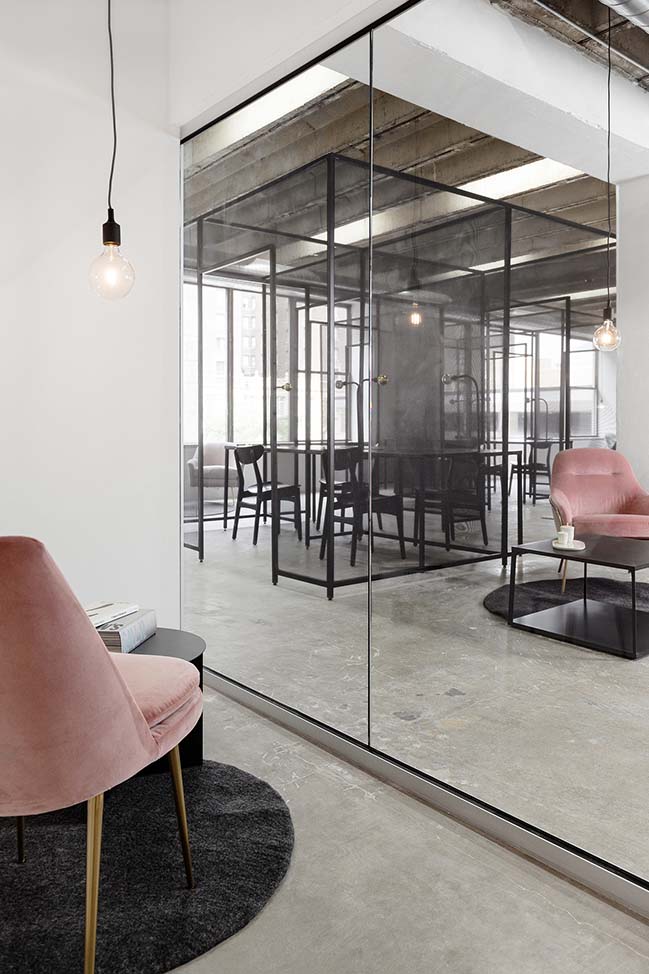 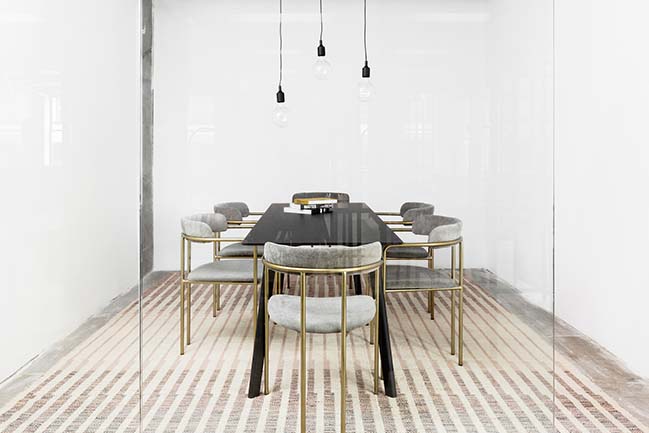 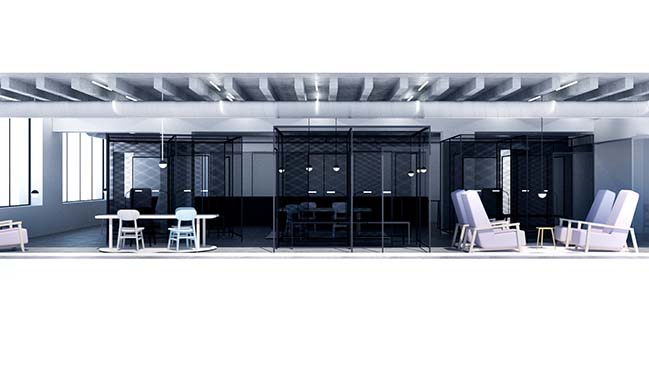 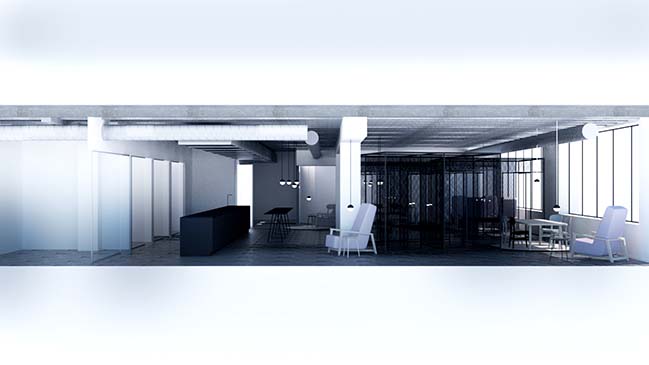 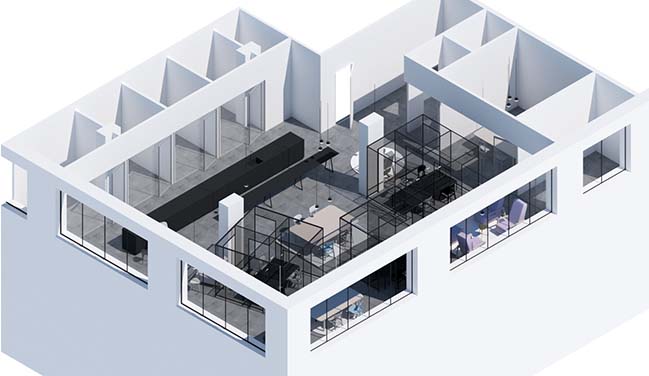 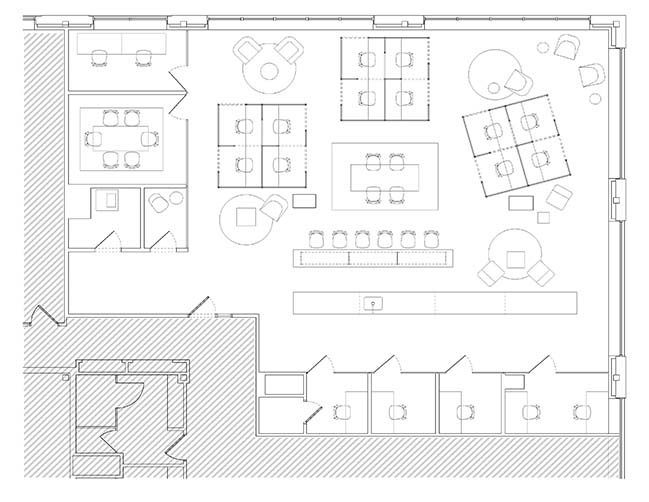 09 / 11 / 2019 Architecture Office​, an architecture firm based outside of Austin, Texas, has designed the flagship work environment for​ ​ShareCuse​, a new coworking space located within the Syracuse Building