In this historic joint venture development between the governments of Malaysia and Singapore, architecture comes to symbolize the symbiotic relationship between two countries and the positive effect on a larger urban, as well as regional context. 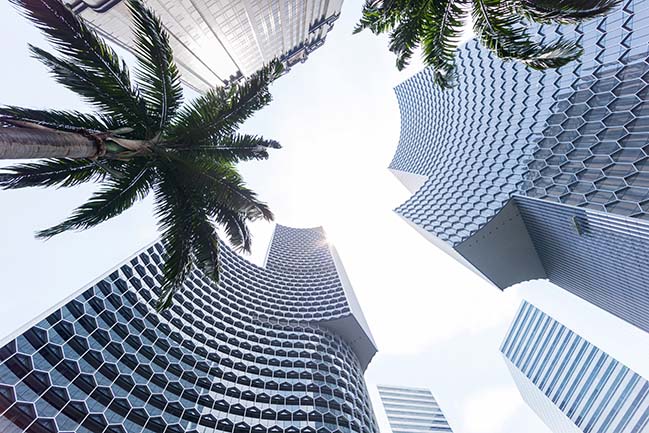 Designed by Ole Scheeren, the DUO twin towers are an act of urban reconciliation. Conceived to knit together a previously disparate part of the city, DUO integrates the surrounding context with its diverse mix of functions around a 24-hour accessible public plaza to form a new civic nexus for the dynamic, prosperous life of Singapore.

The project is comprised of two expressive sculptural towers that have been dynamically carved to create a series of circular urban spaces. Their curved facades ripple with the delicate texture of a honeycomb shading system. The buildings’ slender forms envelope the public spaces, while the resulting geometries complement the angles of the existing architecture and create a landscape of covered and open-air gardens, walkways, cafes and restaurants.

Rather than functioning as a piece of individual and self-referential architecture, DUO is a sensitive insertion into Singapore’s urban fabric that unites a group of existing buildings through spatial integration and establishes a coherent overall urban figure. It turns a previously neglected neighborhood into a lively center for social interaction. 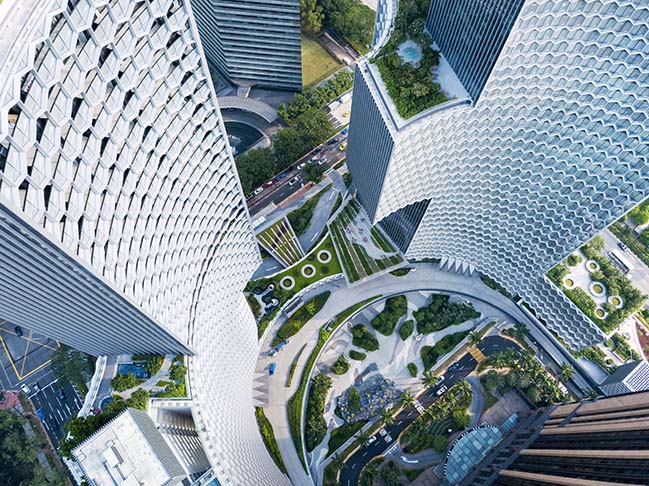 “DUO is about a sense of urban responsibility,” says Ole Scheeren, principal of Büro Ole Scheeren. “It shows how architecture can become a tool of reconciliation within an otherwise disparate and fragmented urban context. The project repairs a broken piece of the city and celebrates public life as the central quality of a socially responsible urban environment.”

DUO represents a historic collaboration between the governments of Malaysia and Singapore. Under guidance of both Prime Ministers and through their respective state investment arms Khazanah and Temasek, the joint-venture development embodies a new era of cooperation between the two Southeast Asian nations.

“DUO is a joint venture between two countries, and the project has come to represent this important duality. Our architecture articulates the dynamic relationship of two urban figures and generates symbiotic effects beyond the project itself with a positive impact on the larger context.” says Scheeren. 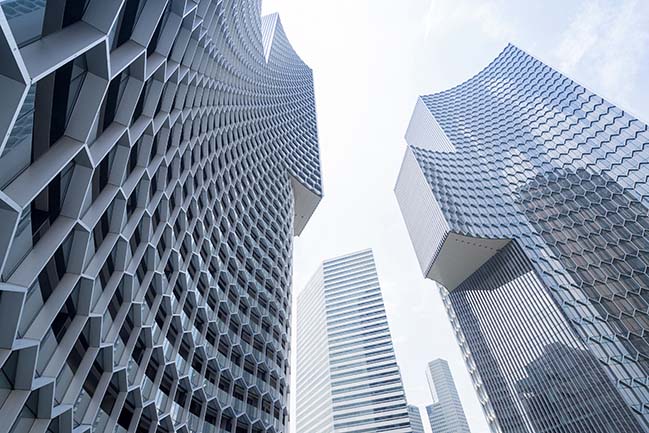 Located on the main route into the city from Singapore’s Changi Airport and nestled between the historic
Kampong Glam district and vibrant commercial Bugis Junction, DUO integrates living, working and retail with public gardens, cultural installations, and a diverse urban context.

While DUO’s two towers contain the main functional elements – one tower accommodates 660 residences and the other corporate offices and a five-star hotel operated by Andaz – the structures dematerialize as they reach the ground, opening out into a porous public landscape. Here, vibrant commercial spaces weave around the footprint of the towers through a sequence of gardens and walkways that pass in and out of the towers hovering above.

The plaza is open to the public 24 hours a day and celebrates the lush tropical vegetation that grows across Singapore. This parkland mixes a series of gardens and landscaped leisure zones which are linked to the rest of the city through multiple connections above and below ground. The development is further served by multiple transport hubs and integrates direct access to the Bugis metro station. Vehicles reach the towers by a series of dedicated ramps, allowing the plaza to serve as a fully pedestrianized space.

“The main gesture of DUO is to give something back to the city,” says Scheeren. “We didn’t want a gated community or a privatized space, so we created a 24-hour accessible public realm that connects to all of the different aspects of the surrounding city. The landscape is conceived as something highly organic and completely permeable – its liquid geometry allows you to flow through the site in almost any direction. It’s a celebration of public access and activity.” 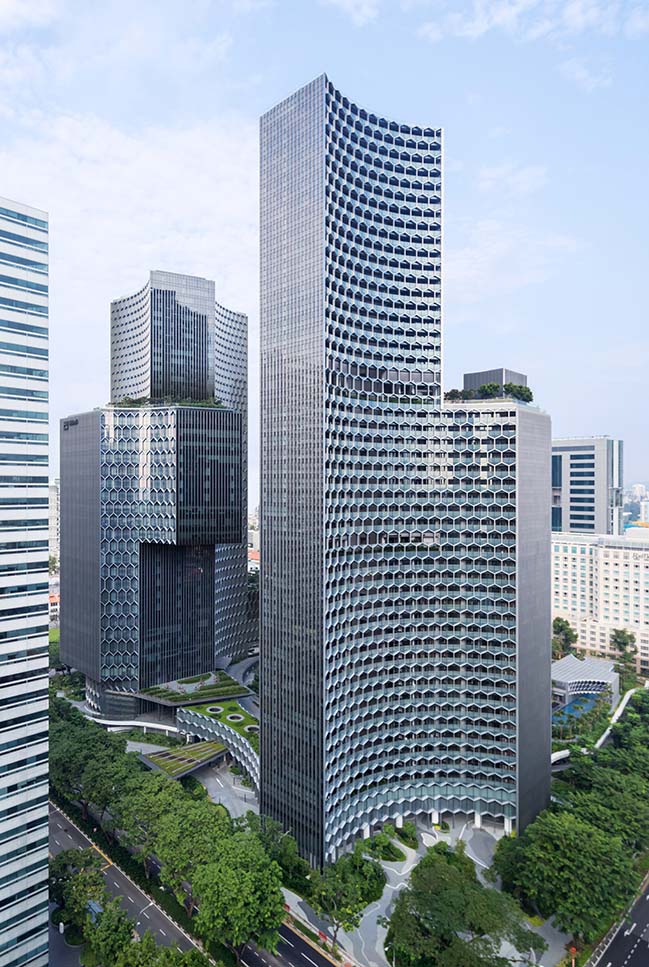 DUO demonstrates how a landmark building can be sensitively embedded within a civic context and how form can be simultaneously performative and sculptural.

Ole Scheeren designed the DUO towers through a process of subtraction. Circular spaces are carved from the building’s mass to establish and articulate precise urban relationships. The two towers are not merely an addition of independent objects, but perform as a space-generator. These spaces integrate the neighboring buildings, while creating a vibrant and diverse landscape of public exploration through the whole district. A series of vertical offsets and cantilevers further articulate the towers’ silhouette and generate a series of elevated public spaces.

“Instead of thinking about the building as just an object in its own right, we have defined the towers through
examining urban space and reintegrating the area’s existing architecture into something new. By carving a series of precise urban figures, suddenly, all of these floating objects find their precise anchorage in a spatial context.”

The orientation of DUO maximizes unobstructed views in multiple directions while its sweeping curves capture and channel prevailing wind directions throughout the development. The public ground floor is entirely passively cooled to create a comfortable and friendly public space that can be left open and accessible around the clock without concern for the energy consumption of air conditioning. The result is a series of microclimates throughout the development that foster a restful, oasis-like environment. 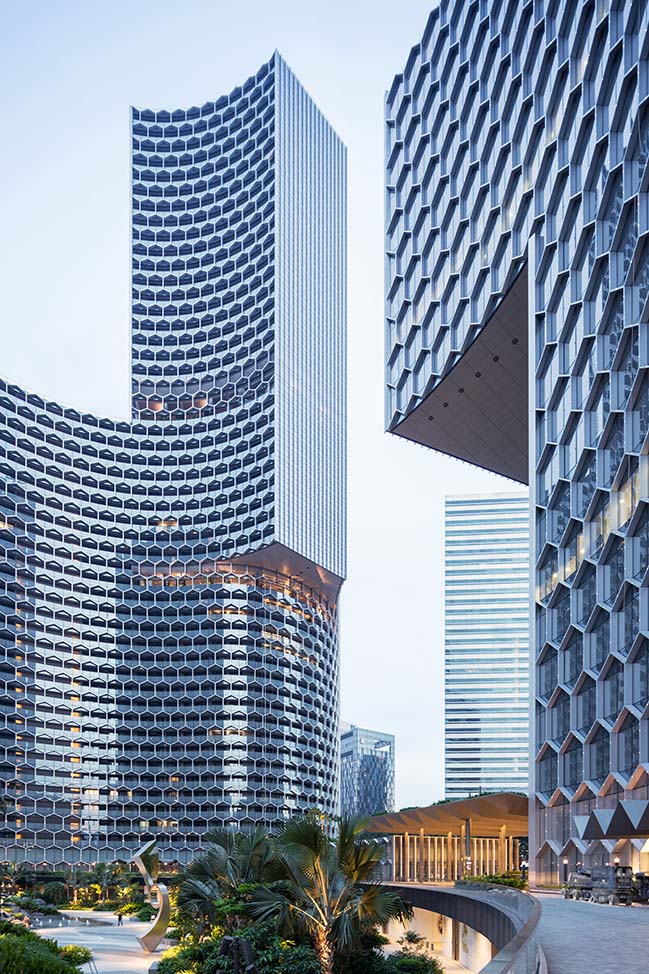 Stretched across the skin of the DUO towers is an intricate honeycomb texture that not only hints at the hive-like activity of the surroundings, but also serves as a functional element in the building’s environmental strategy.

The honeycomb comprises a series of hexagonal sunshades that help protect the towers from the heat and
glare of the sun, without interrupting the views out over Singapore’s gardens, oceans and skyline. The grid also provides texture to the smooth, concave curves of the towers, as well as accentuating the dramatic cantilevers and setbacks that form the physical body of DUO. The slender edges of each building are marked by a series of thin, vertical lines, designed to emphasize the elegance and refined expression of the towers.

“The honeycomb expresses the dynamic curvatures of the facade and simultaneously becomes an environmental tool,” says Scheeren. “Our strategic deployment of passive environmental design strategies greatly enhances the sustainable nature of the development. Duo is a project about acting with responsibility towards the urban environment and the public domain – both environmentally and socially.” 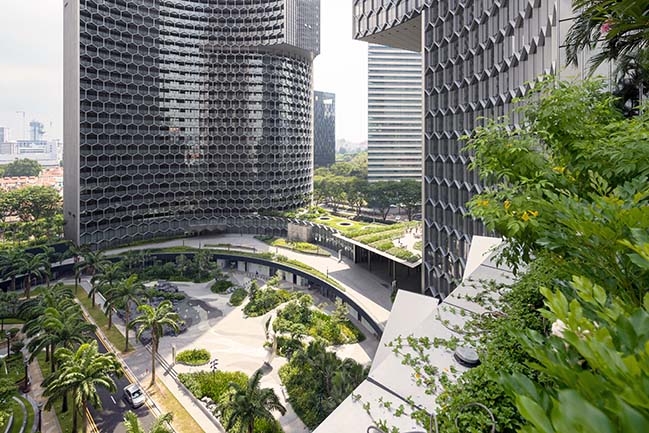 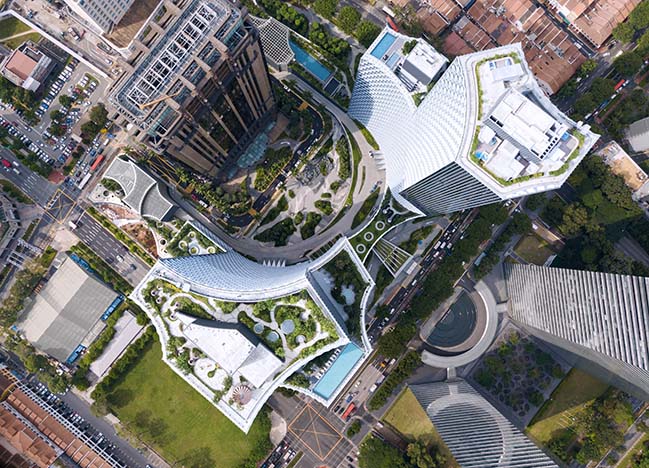 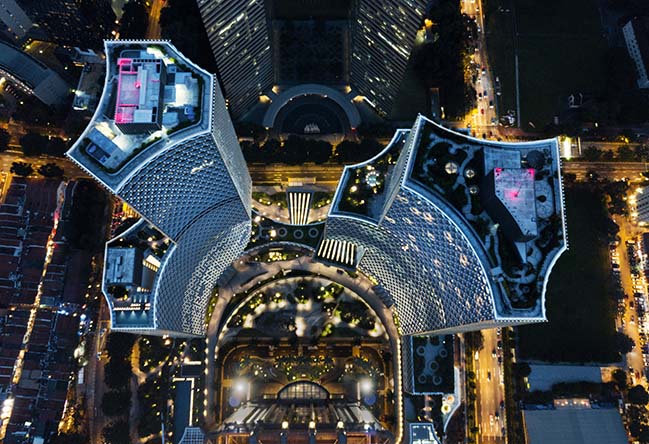 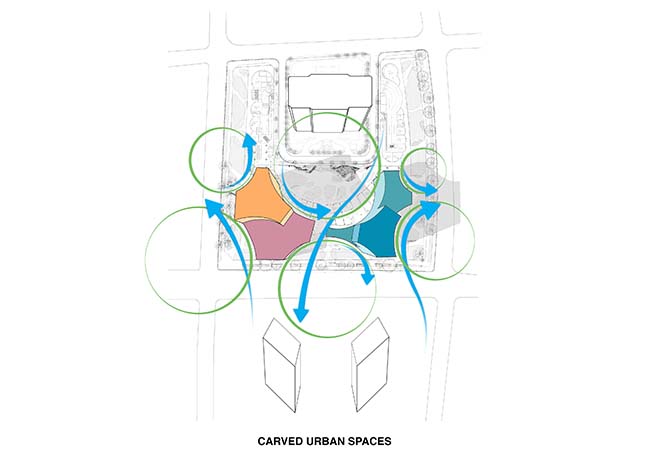 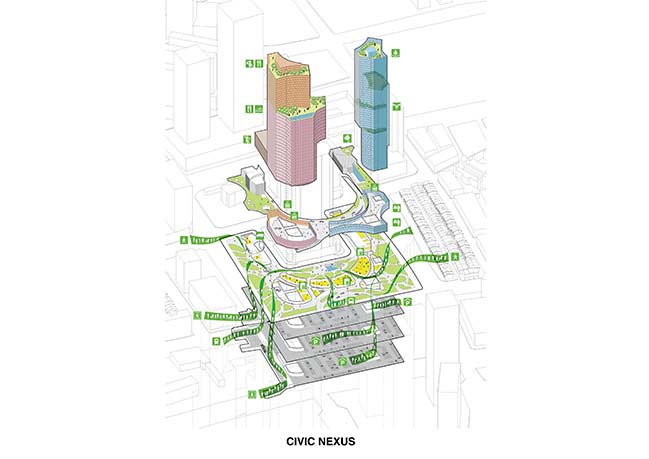