Designed by global design firm Sasaki. The master plan for the Chengdu Panda Reserve represents the launch of China's increasing communication, collaboration, and awareness of its pioneering strategies to protect the species and its native habitat. 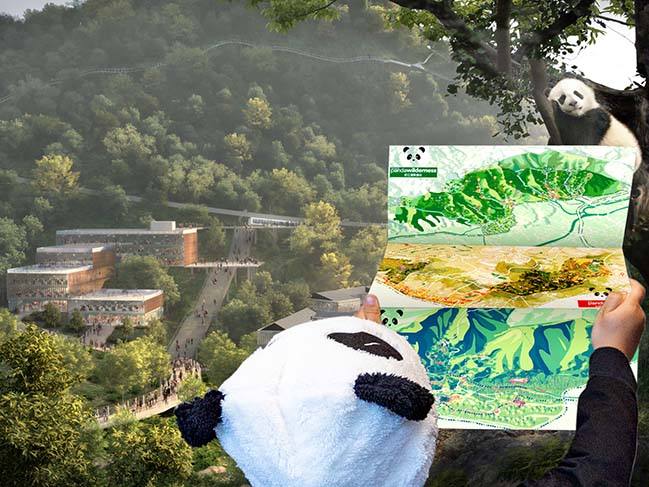 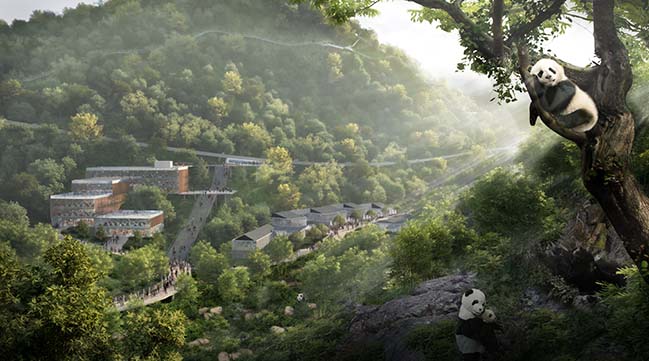 From the architect: The giant panda is an icon of Chinese culture and a symbol for wildlife preservation efforts around the world. With only about 1,800 left in the wild, it is one of the most vulnerable species on Earth. Although a staple at many zoos around the world, giant pandas are native to only one region in western China near Chengdu, which is also one of the fastest growing cities in the world. Although urbanization and conservation are often in conflict with each other, the Chengdu Panda Reserve provides a framework for the protection of the giant panda and its native habitat, and strategies which will lead Chengdu into a more resilient future. 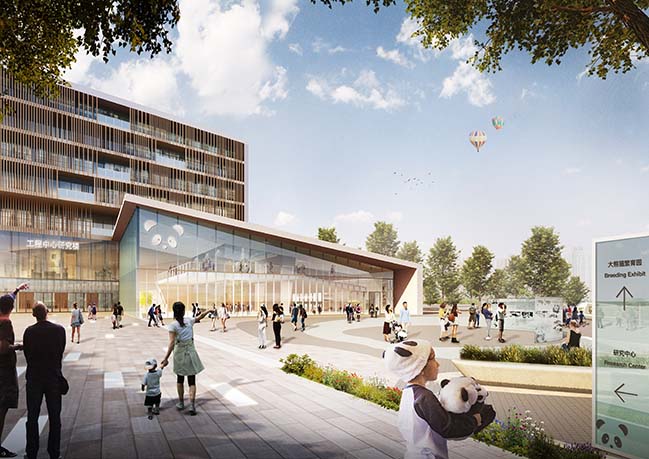 The master plan for the Chengdu Panda Reserve represents the launch of China's increasing communication, collaboration, and awareness of its pioneering strategies to protect the species and its native habitat. Conservation efforts have multiple benefits, as pandas serve as an 'umbrella species' for other wildlife which indirectly benefit from the protection of their shared habitat. Sasaki’s plan for the reserve provides a framework for the protection of the species through a robust expansion plan focused on conservation, education, and research—with the ultimate objective of improving their ability to thrive in the wild. 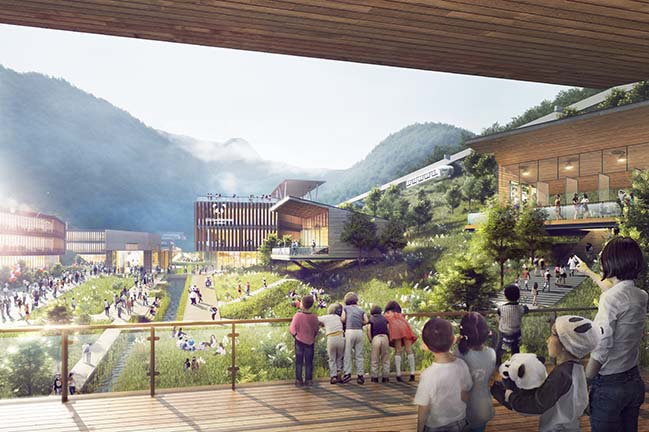 With over 20 million people expected to visit the Chengdu Panda Reserve each year—a figure that surpasses current annual visitors to Disneyland—the city has a tremendous responsibility to advance its development in a manner that is mindful of protecting the panda’s habitat. 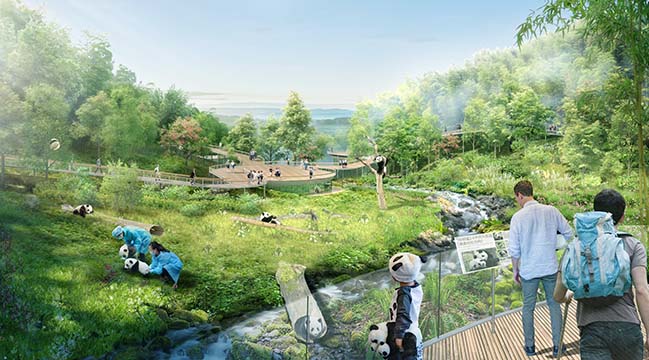 The three disparate sites which comprise the Chengdu Panda Reserve are organized by their primary functions, as well as the amount of human interaction and disturbance. The first site, Beihu Panda Park, builds upon the existing “Panda Base” visitor experience by providing an urban education center to accommodate those seeking a more immersive experience. 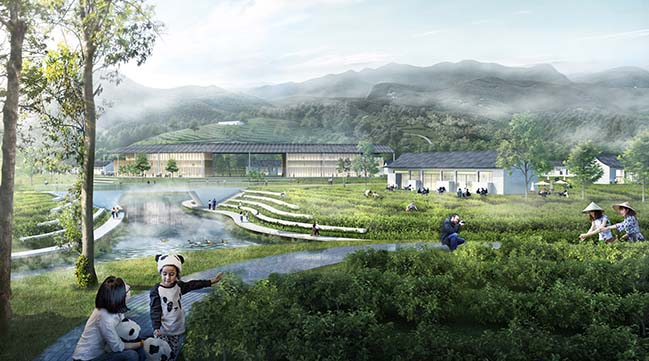 This urban destination, close to downtown and linked to the city by public transit, introduces the panda to the millions of people who come to Chengdu each year to experience them up close. Here, visitors can learn about the daily lives of pandas and their companion species, their shared habitat, and get a glimpse into ongoing research and other efforts to protect them. 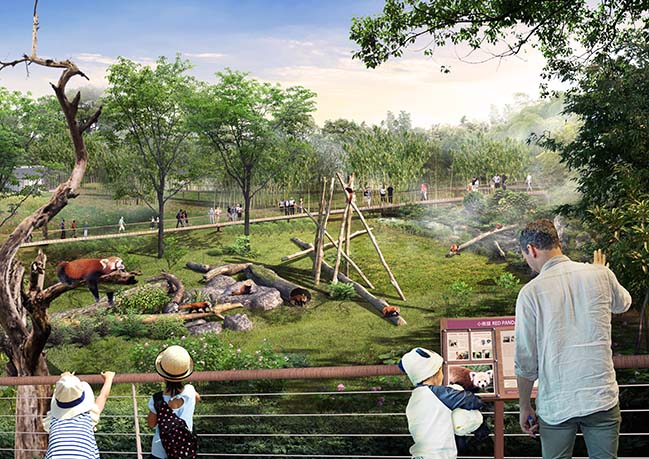 The second and most remote of the three sites that comprise the Chengdu Panda Reserve is the Dujiangyan Panda Wilderness. Primarily focusing on research, including breeding techniques and assimilation into the wild, this more isolated area of the reserve is located at foothills of the Tibetan plateau. As one of the gateways into the Giant Panda National Park, researchers here focus on pre-release training to acclimate juvenile pandas born in captivity prior to final release into the wild. 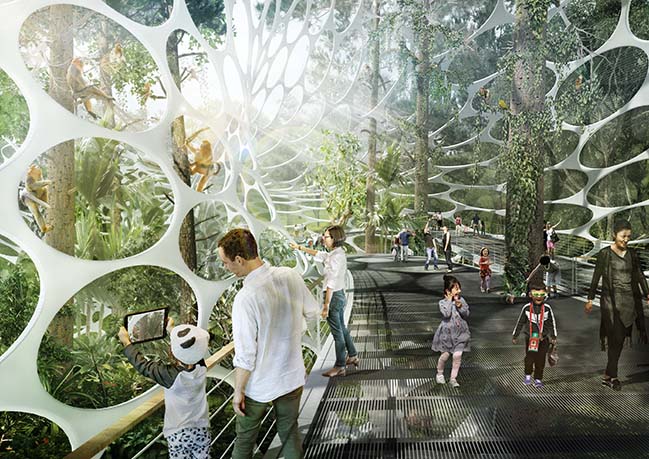 The third site, Longquanshan Panda Village, is located near Chengdu’s new airport and provides an abbreviated glimpse into conservation efforts and highlights Chengdu’s distinctive culture. This gateway into the city will provide an educational overview of the region’s history, food, and wildlife, including the prized native panda. 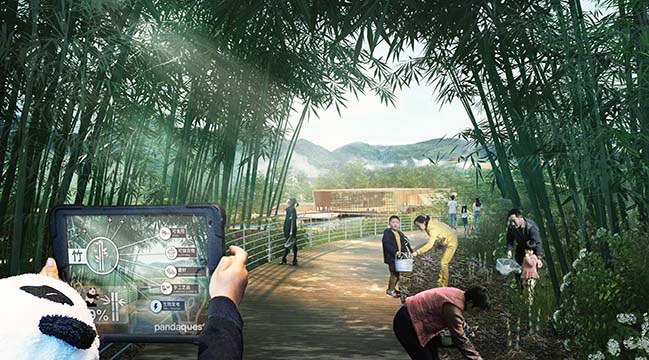 It is difficult to name an animal more beloved than the giant panda. The near-universal adoration of this endangered species was never far from mind as Sasaki collaborated with city leaders to thoughtfully grow the city while building a resilient future for the species. 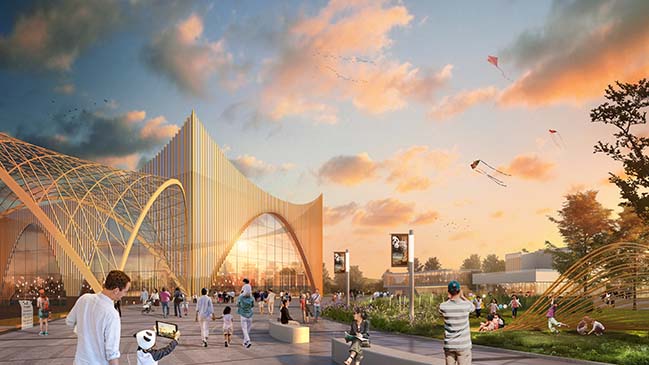 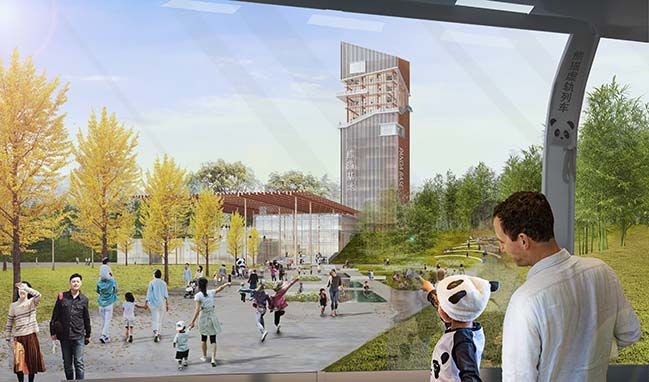 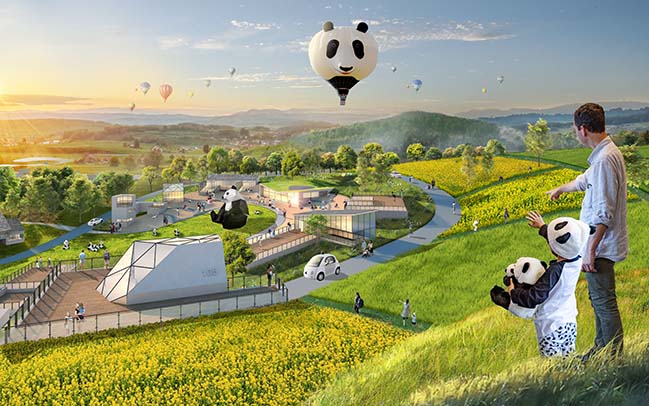 > YOU MAY ALSO LIKE: The new Panda House in Copenhagen by BIG 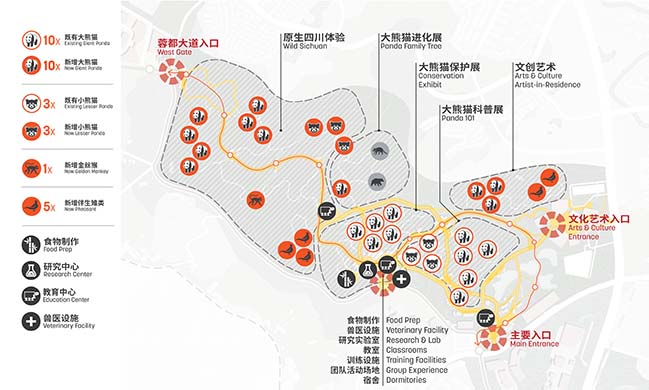 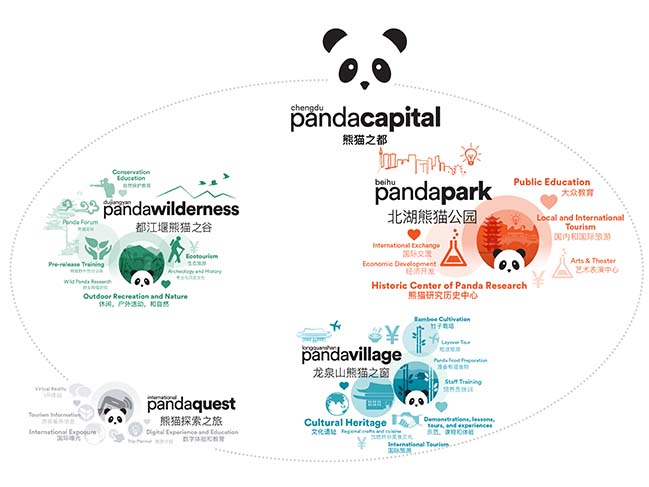 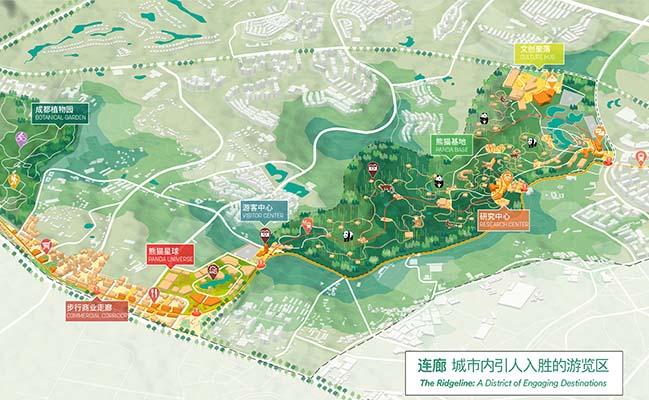 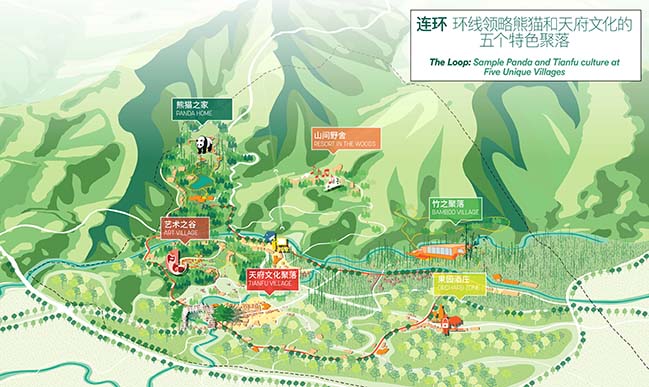 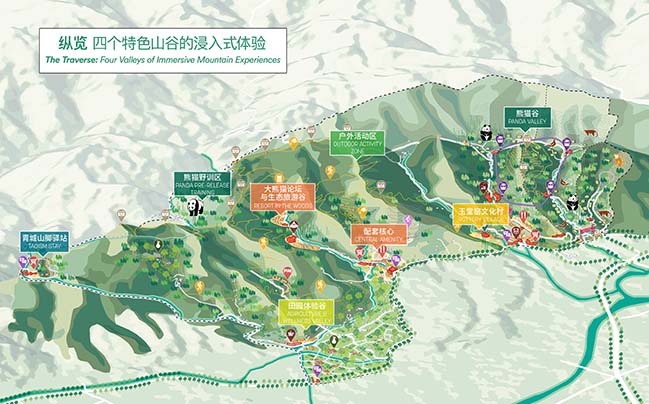 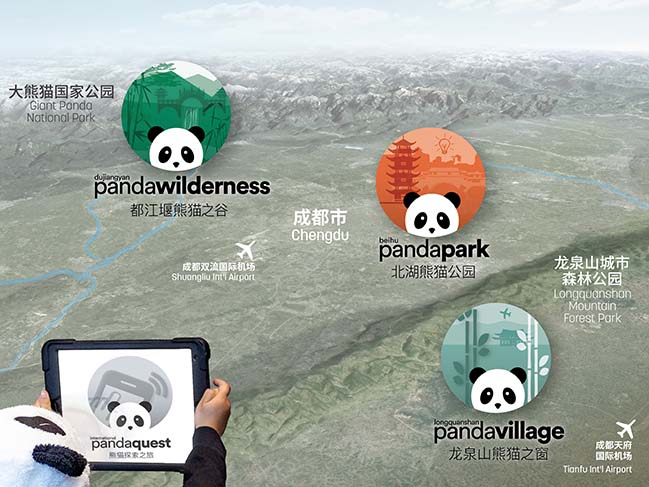 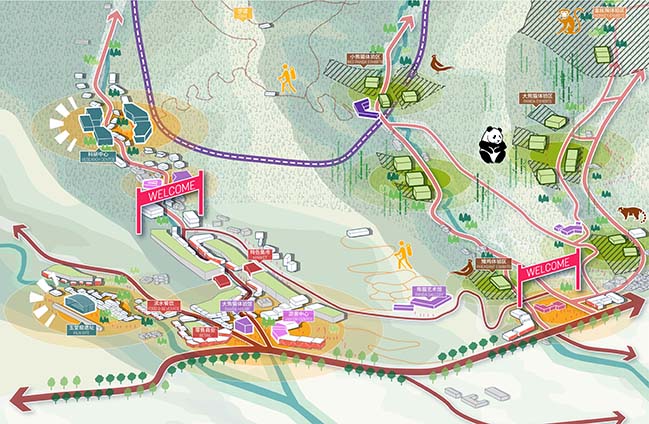 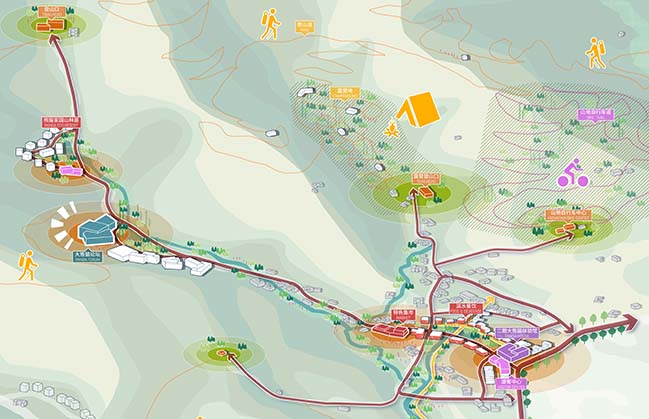 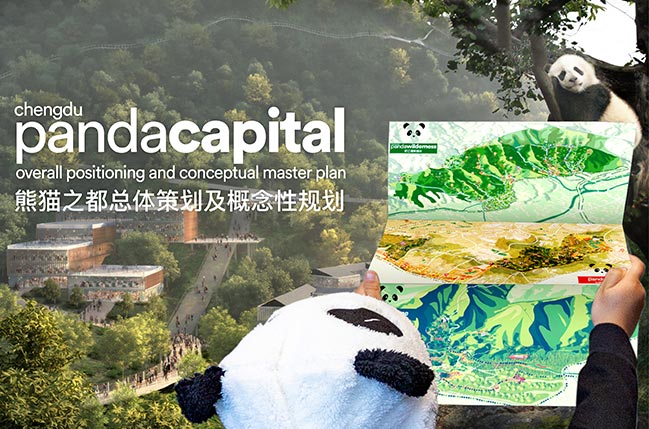