Designed by Boston-based architecture firm French 2D, Outlier Lofts is a renovation that addresses the site’s many historical layers. 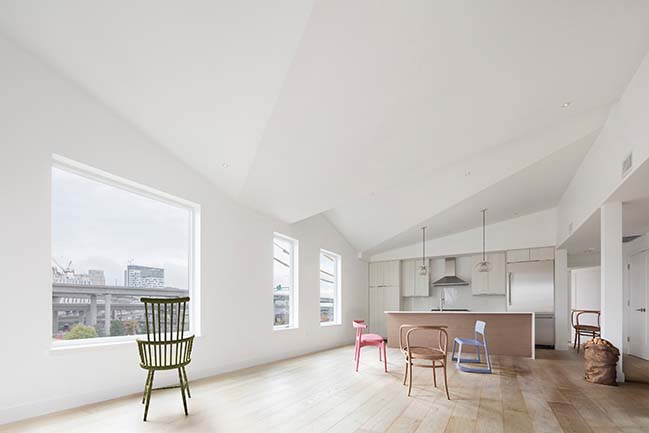 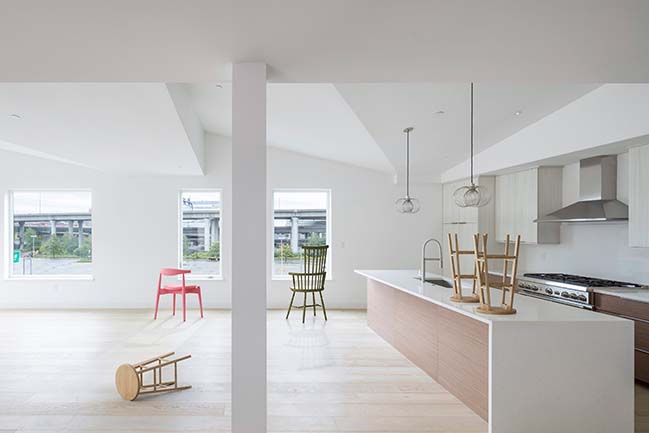 From the architect: Sited on an urban corner in the neighborhood of Charlestown, the existing structure underwent a series of re-orientations, a history that French 2D threads into the new design, considering the way its three sides operate as both ‘backs’ and ‘fronts’ of the building. 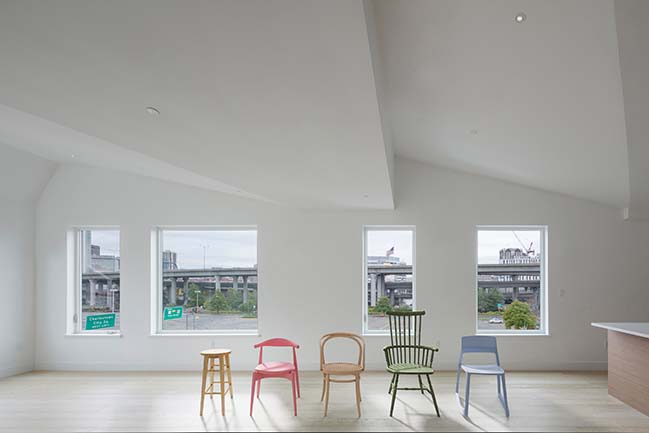 The building was originally constructed in the 19th century as a pair of connected townhouses with entrances facing a wide canal and a sea of potato sheds along a trainline. Following a fire in the 1960s that destroyed the third floor, the building was reoriented, with its main entrance shifted to an abutting side street, eventually becoming a bar. 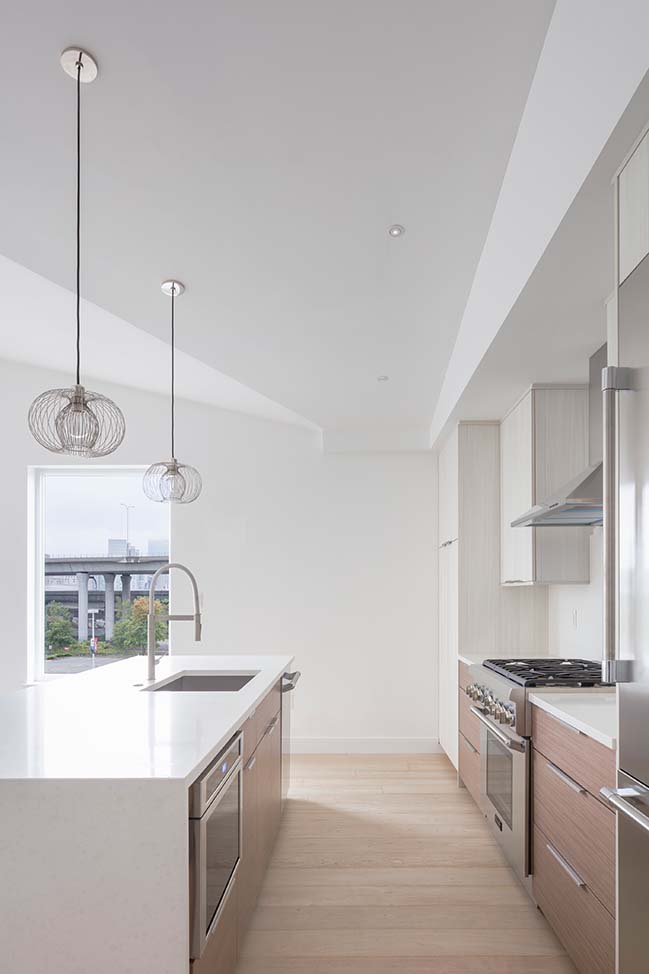 The current renovation maintains the bar’s side entrance and creates three loft-style flats, entered from the short side of the building. Each loft measures 1,529 square feet with two bedrooms and two baths. The ghosts of previous entrances are maintained along the building's original frontage with the new window arrangements that echo the townhouse rhythm. 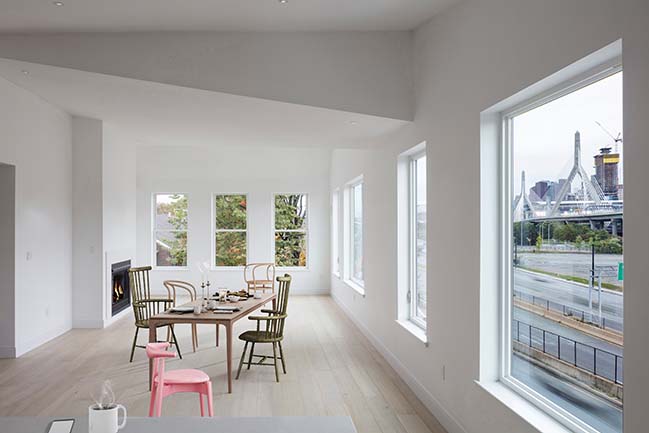 The architects re-introduced the lost third floor, incorporating a new saw-tooth roof that creates a “mohawk-like” profile facing the elevated highway and roads beyond. The short side of the building maintains a straight-faced integration among its more traditional neighbors. “Like a friendly nod to those entering Boston from the highway, the reimagined building addresses the city as a new front face for a neighborhood that might otherwise be seen as inward-looking,” notes cofounding partner Jenny French. 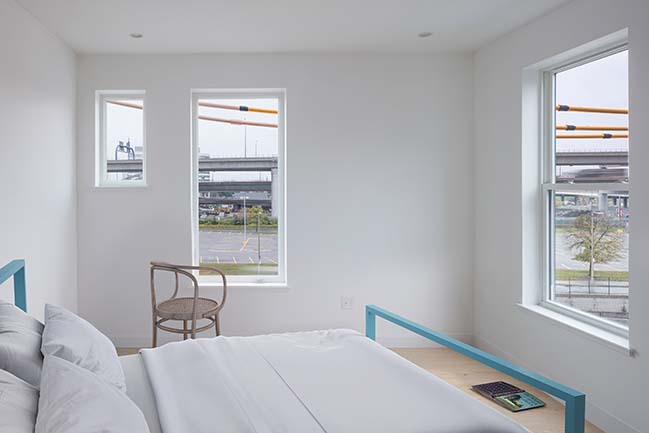 For the new design, French 2D engaged in a deep interest in the imagined inner life of the building, and in creating a surface tension that accommodates it’s many historical iterations. With no signage but high political visibility (via a historically political clientele), the bar that previously inhabited the building  – ‘Old Sully’s’ – was one of the most invisible yet visible buildings in Charlestown. It also served as a location in Ben Affleck’s recent film The Town. 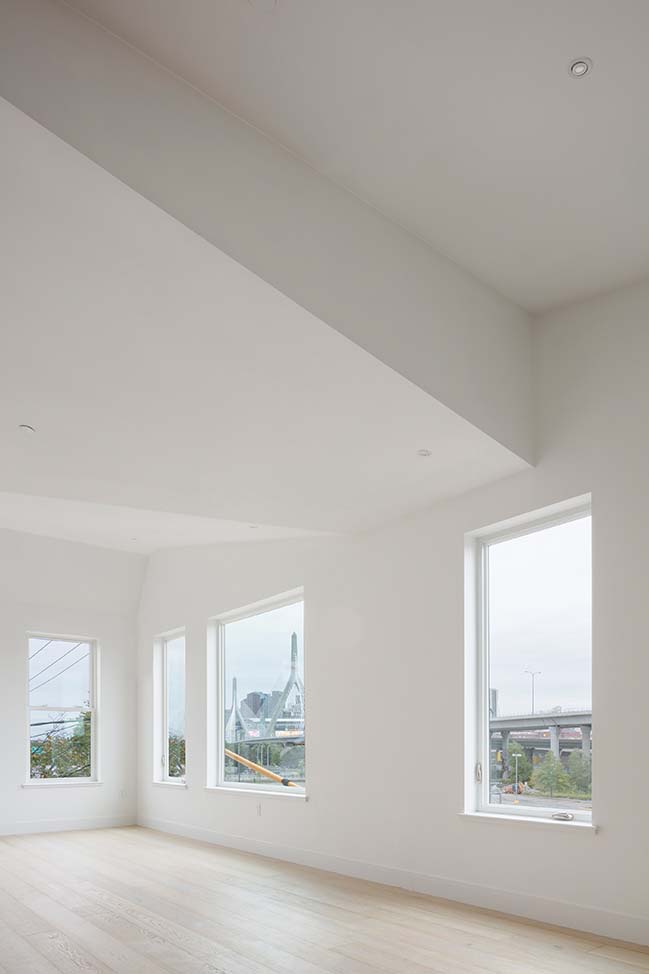 French 2D worked through these narratives, as well as that of the original townhouses with an industrial edge, to arrive at a contemporary dwelling that allows multiple histories to be read through a single structure. 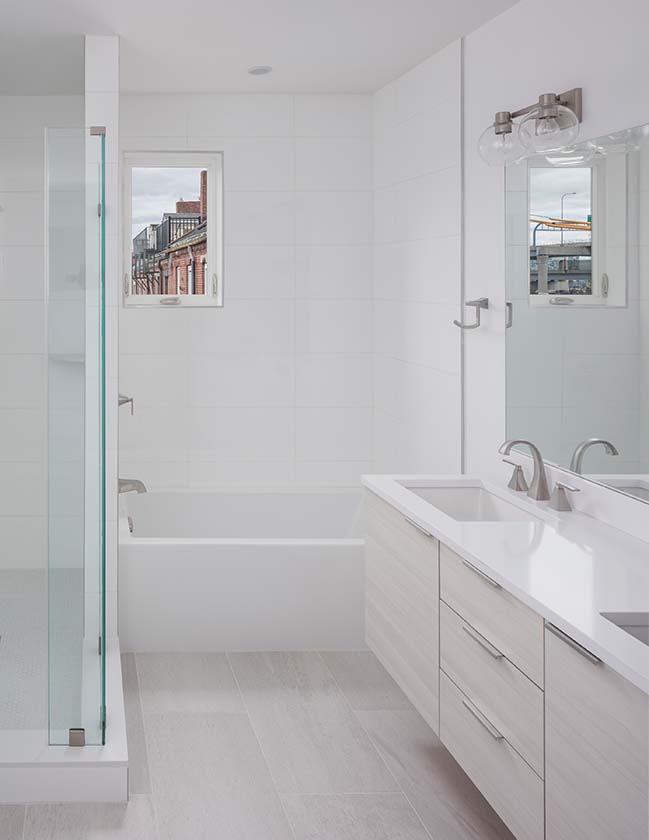 French 2D's interest in imagined lives and layered history is explored beyond the architecture in an experimental staging project to create the interior images of the lofts. Says co-founding partner Anda French, “This project speculates on architectural production by misusing representational tools like virtual staging, a rendering technique popular in the real estate industry to sell empty homes, and by using orthographic drawings to conjure ghosts.  Plans and elevations collapse multiple realities, while final photographs are inhabited by a cast of the structure’s past and future furniture residents.” 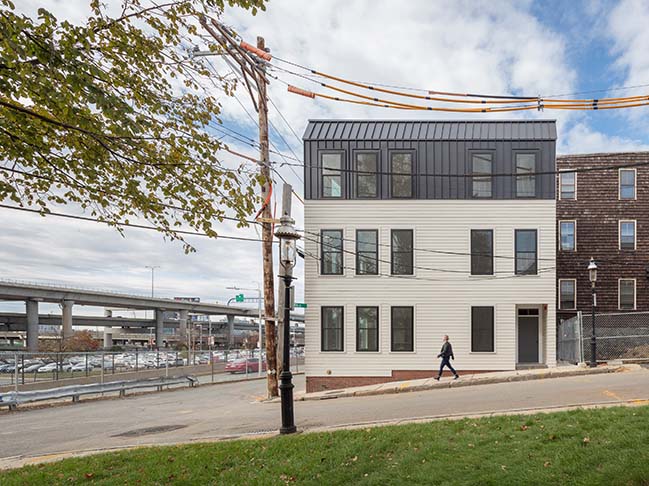 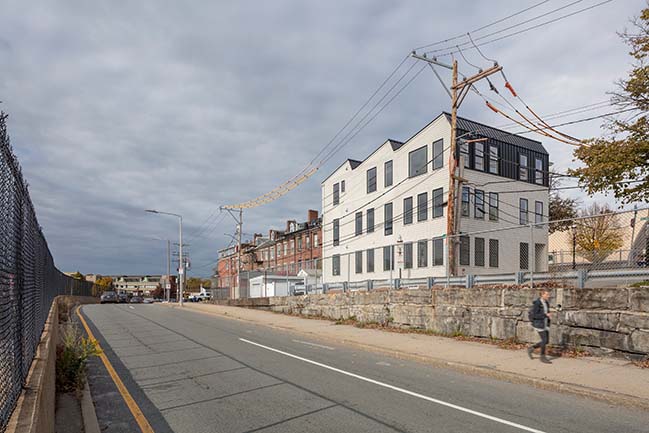 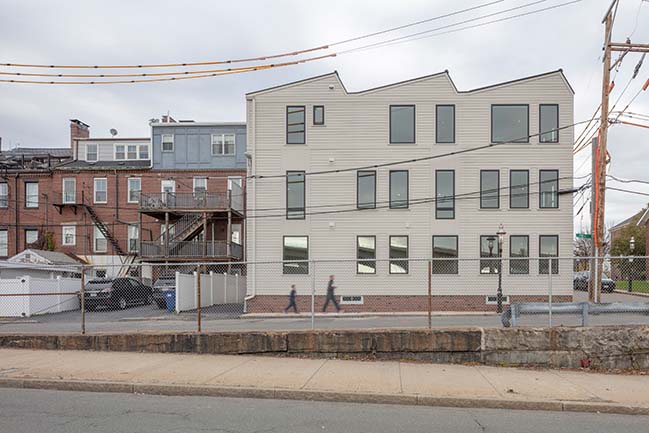 > YOU MAY ALSO LIKE: ICA/Boston Watershed by Anmahian Winton Architects 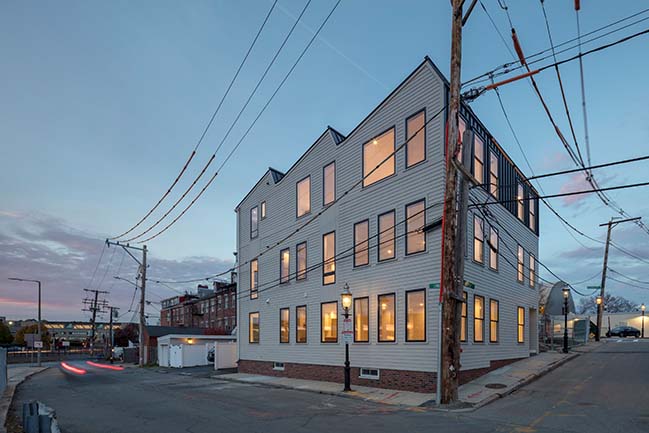 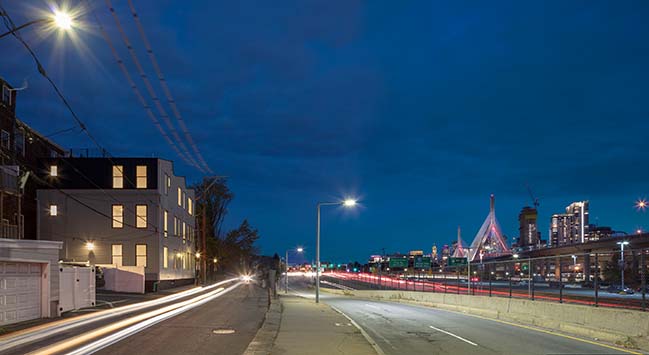 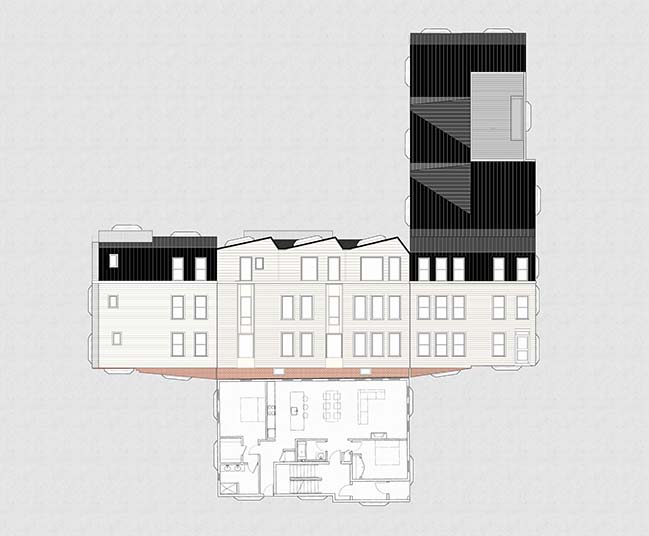 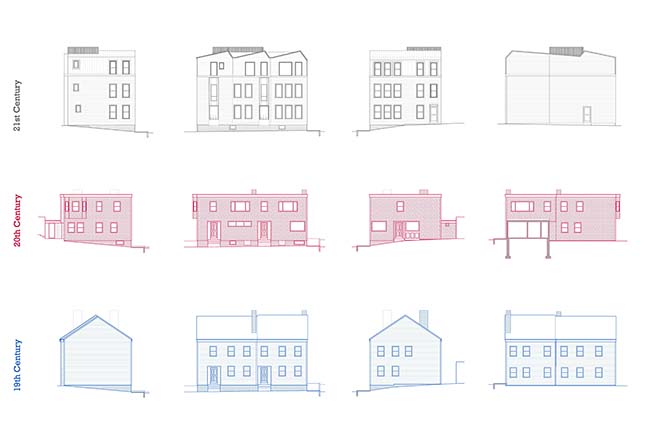 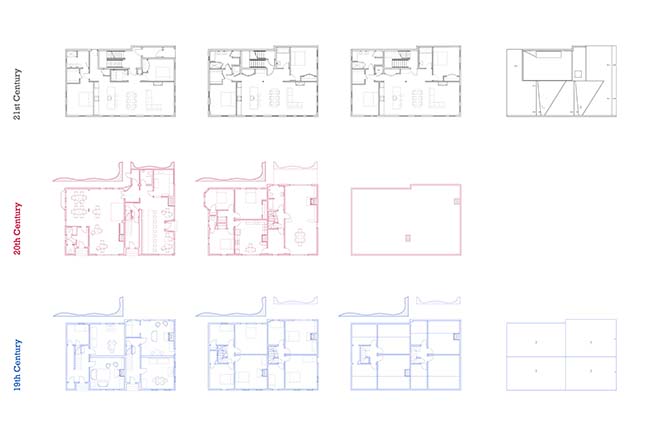 11 / 13 / 2018 Designed by Boston-based architecture firm French 2D, Outlier Lofts is a renovation that addresses the site many historical layers