The Danish architecture firm COBE, headed by Dan Stubbergaard, has designed a new multi-purpose building for the world-famous sports brand adidas’ corporate headquarters in Germany. The building was officially opened last year, and now, the photos have been released for publication. 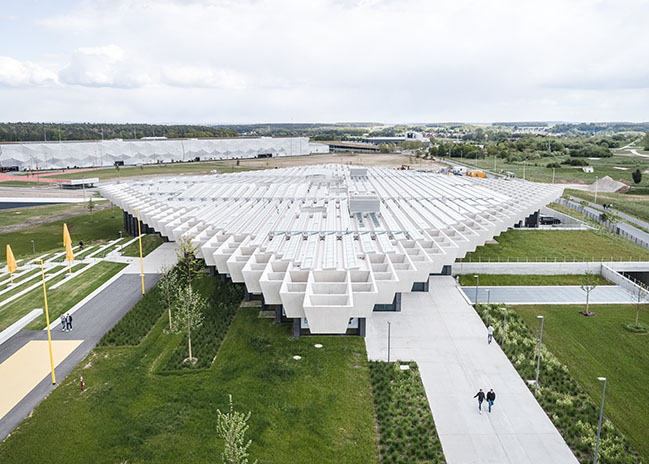 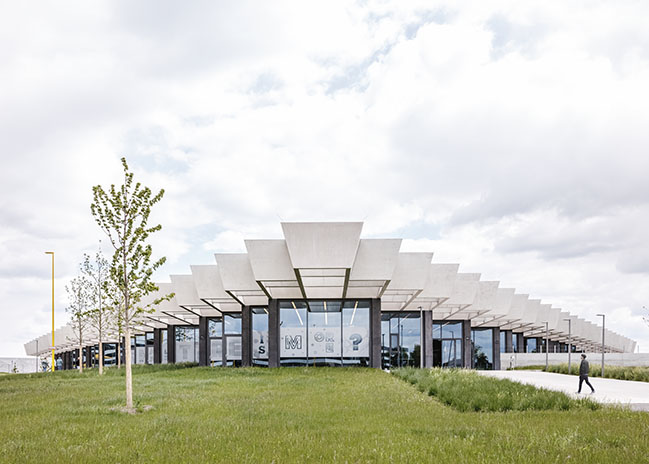 From the architect: In 2019, the iconic sports brand adidas had its 70th anniversary. And in 2018, the world-famous company with the three iconic stripes opened a huge and striking new building that forms part of its corporate headquarters, ‘World of Sports’, in the city of Herzogenaurach in southern Germany. 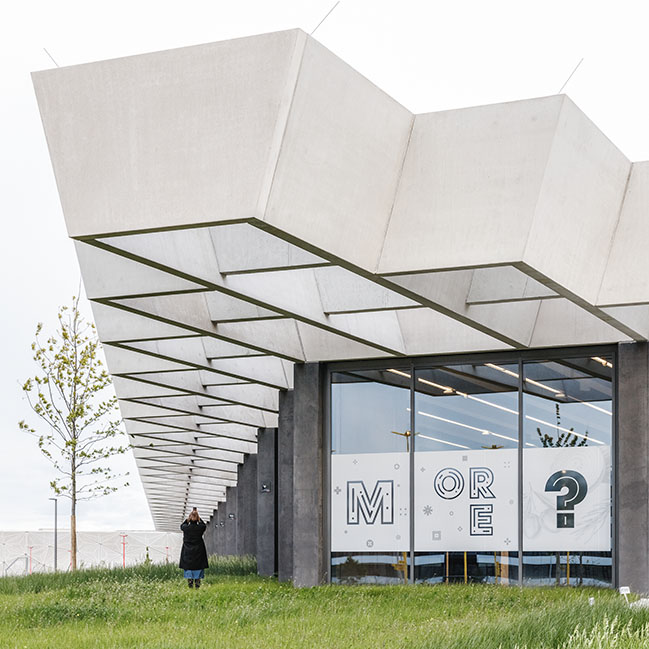 All of adidas under one roof The new building, named HALFTIME, was designed by COBE and totals 15,500 square meters. In addition to a canteen for all HQ employees, the building contains meeting rooms, a conference center and a showroom where the company’s high-profile brand ambassadors can stop by to see the latest new designs, collections and ideas. The flexible and multi-functional architectural design makes it possible to transform and modify the building for varying purposes. 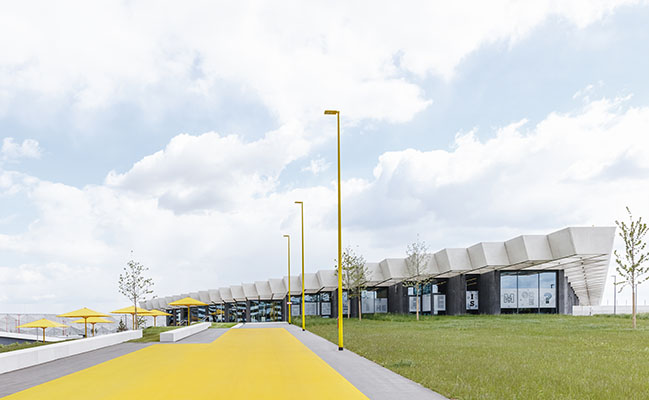 “To accommodate the many internal and public functions that HALFTIME includes, we designed a versatile, multi-purpose building that brings as many of the company’s activities and functions as possible together under one roof. The huge rhomboid roof covers the entire building like a carpet, bringing staff, visitors and brand ambassadors together in the same building and thus enabling more and wider contacts,” says COBE’s founder, the architect Dan Stubbergaard. 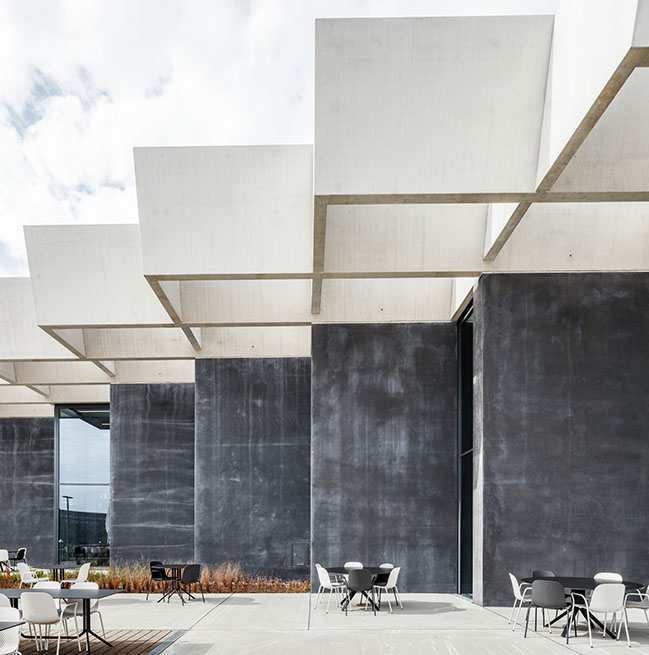 Bathed in light
The 8,650-square-meter rhomboid roof structure consists of V-shaped concrete beams and is covered in glass. In fact, a third of the roof consists of skylights, allowing daylight to flood the building throughout. The concrete beams, each 16 meters long and weighing 28 tons, add up to a total length of 3.2 kilometers. Nature is invited in with the use of natural materials, planted walls, large floor-to-ceiling windows, a ceiling height of 8 meters and conservatories with trees and plant beds throughout the building. This creates a strong connection between indoors and outdoors throughout the headquarters and offers adidas staff and visitors an optimal work environment and indoor climate. The building is also positioned to receive the internationally acknowledged LEED gold certification, which is given to the world’s most sustainable built structures. 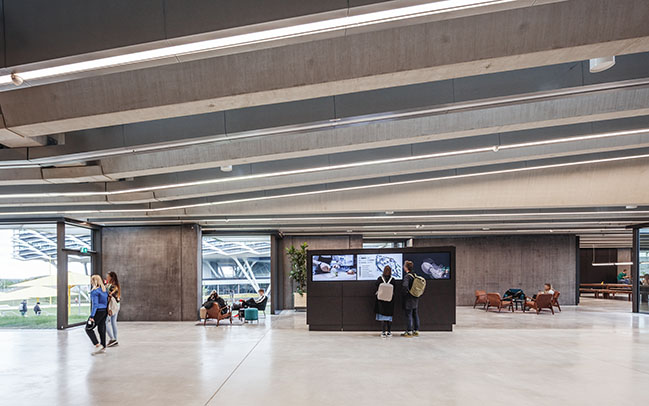 Creative environment
With HALFTIME, COBE has designed an inspiring, dynamic and unusual work environment that offers creative and informal meeting places and networking opportunities for staff, visitors and brand ambassadors alike. For example, the building contains 12 workshop rooms, each representing a different sport venue, and a large event hall with room for 1,500 people, designed as a gym with old-school wall bars. COBE has also designed a chair for the new building, the HALFTIME Chair, in collaboration with the Danish design brand HAY. 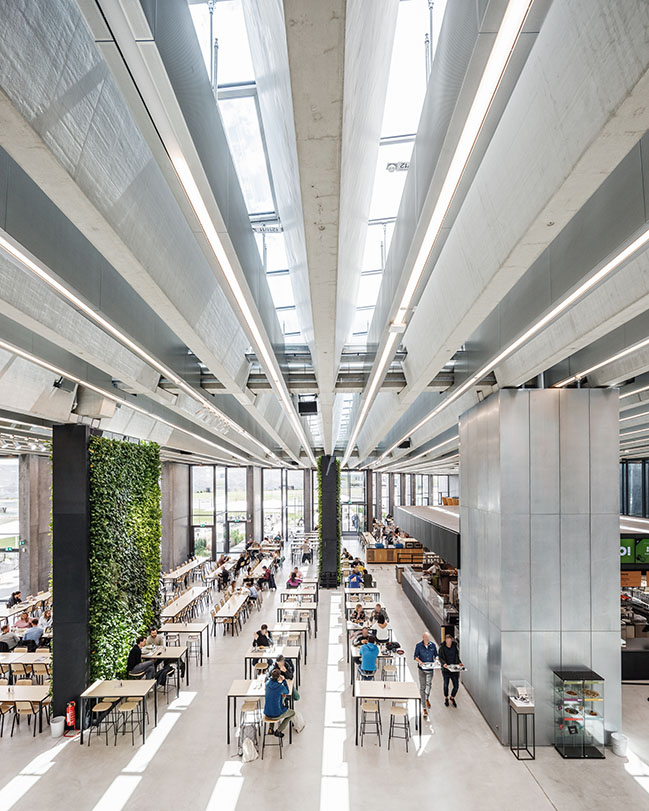 “A key task was to create the right atmosphere to reflect the unique adidas culture. We did this, in part, by matching the different needs with different sports, making room for big ideas and large gestures as well as a touch of humor. In addition to the event hall, which is designed as a gym, you can hold meetings at the bottom of a bright blue swimming pool, in a locker room or in the adidas founder Adi Dasler’s old workshop, complete with tools,” says Dan Stubbergaard. 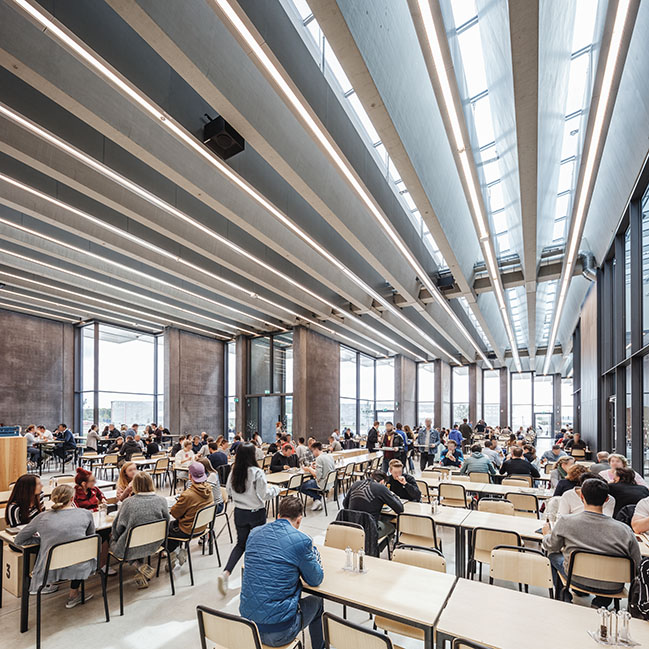 HALFTIME is the result of an international architecture competition held by adidas in 2014 and won by COBE. The building was officially opened on 12 October 2018, and the pictures from the building are now ready to be released. HALFTIME is COBE’s first completed project in Germany. 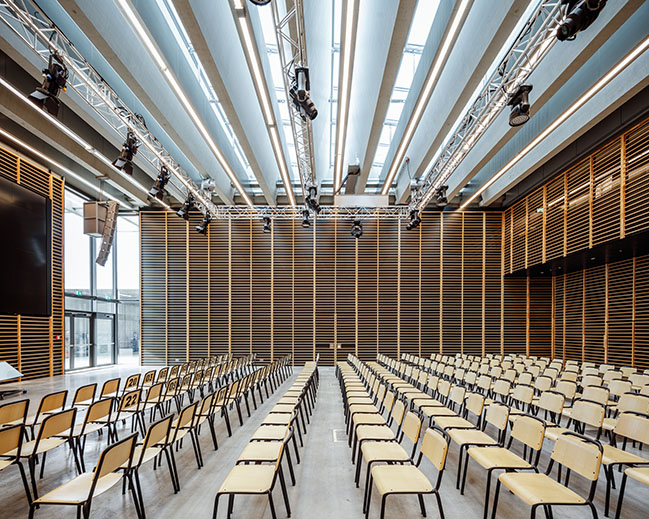 YOU MAY ALSO LIKE: Karen Blixens Plads by COBE 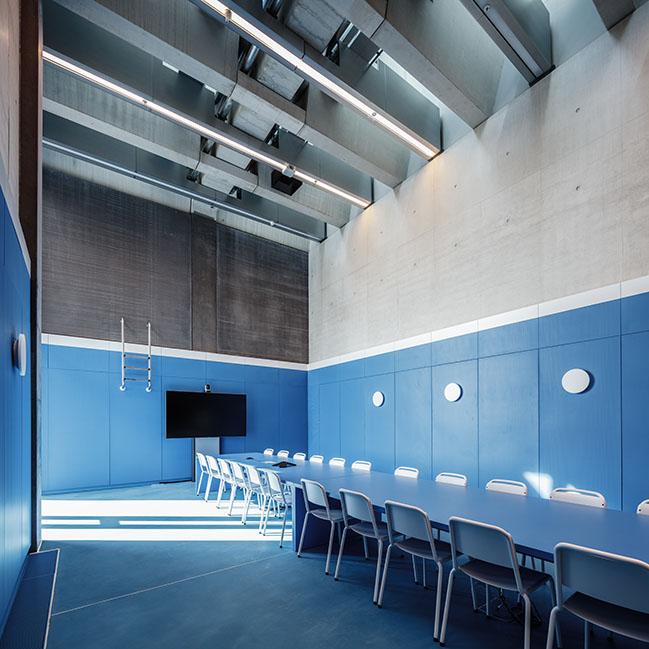 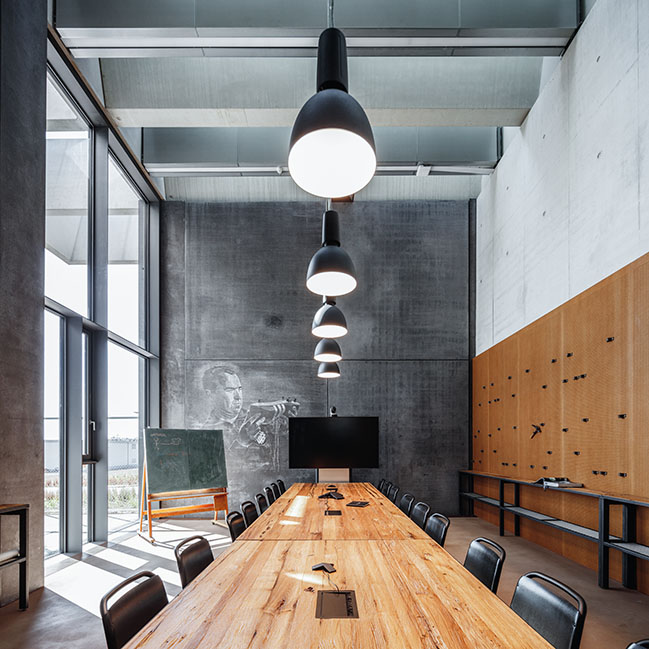 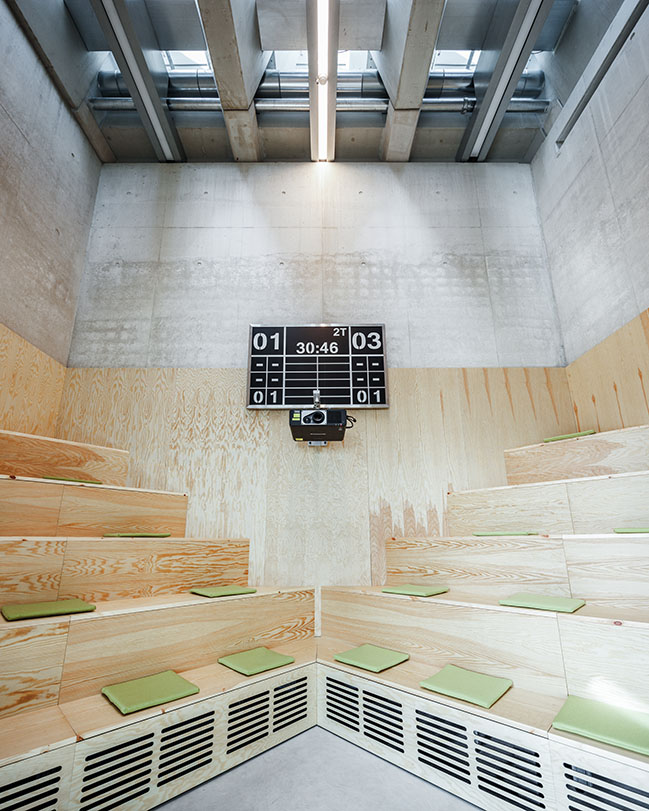 YOU MAY ALSO LIKE: Køge Nord Station by COBE and DISSING+WEITLING 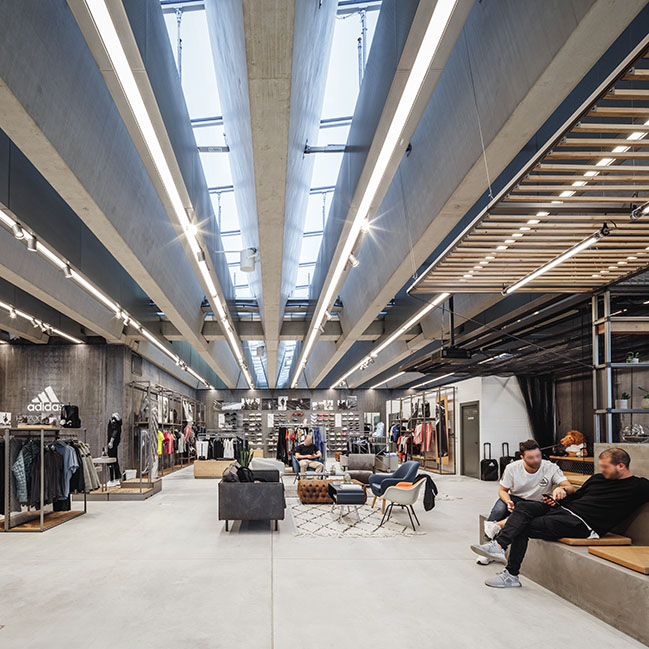 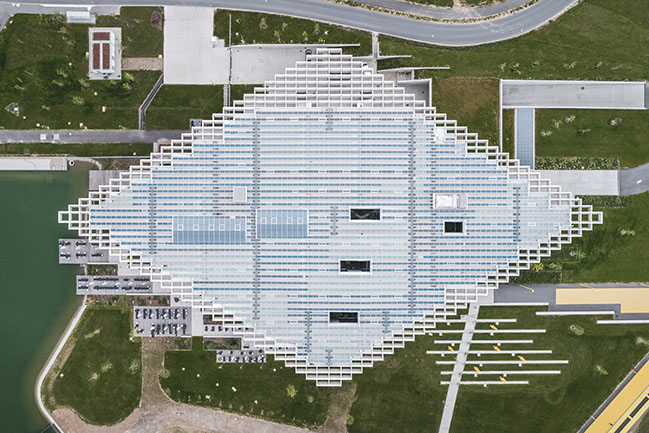