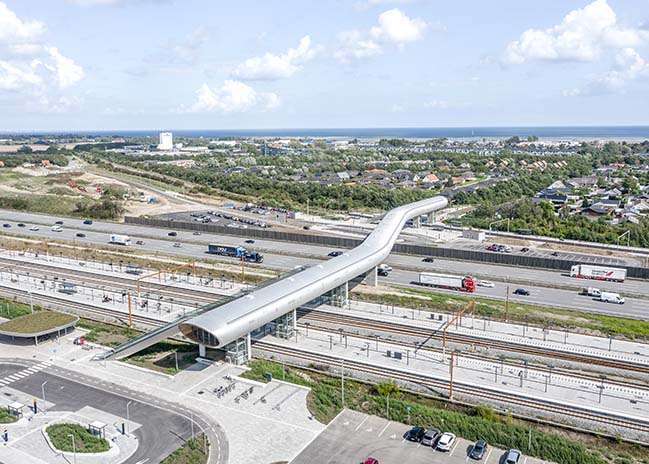 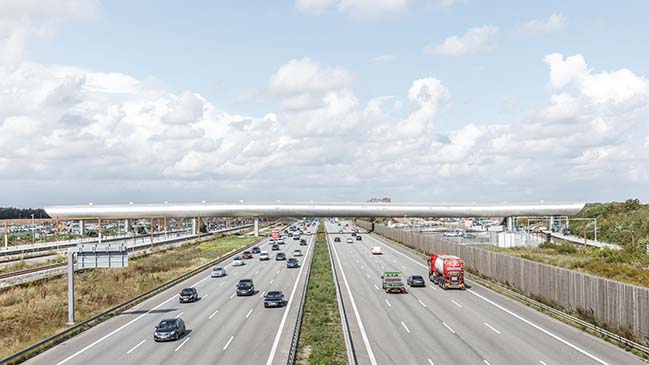 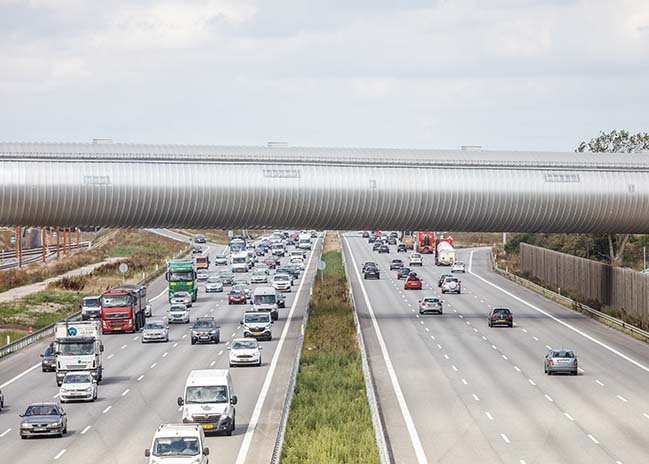 Køge Nord Station was officially opened by Crown Prince Frederik at an event on May 31, 2019. The event marked the opening of the new gateway to Copenhagen, which provides access to more efficient and sustainable transport for everyone going to and from the nation’s capital. 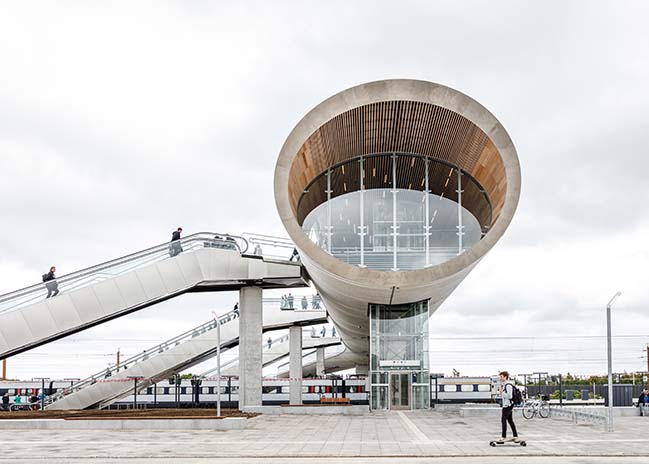 And that is not all: For Køge and the rest of the region the new project adds a landmark of international dimensions: the 225-meter-long footbridge that connects the new double-track high-speed rail line between Copenhagen and the city of Ringsted with the existing commuter urban-suburban S-train line above the Køge Bugt Highway. 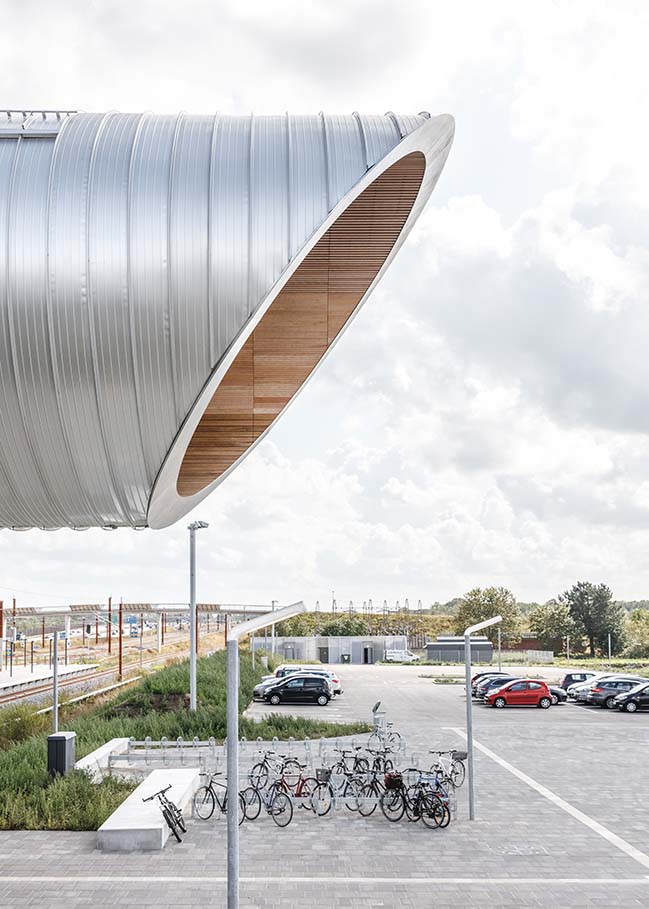 The striking futuristic design is apt for an area that is currently undergoing tremendous transformation, and the bridge is going to act as a catalyst for growth and development in the Køge area in coming years, says Dan Stubbergaard, architect and the founder of COBE:

”Together, we have designed a landmark for the development that the city of Køge is currently undergoing. A development driven by innovation, pioneering spirit and a bold outlook that is embodied by the station bridge and the related facilities. The bridge is also a new architectural attraction for the area; a long, spectacular steel snake sinuously extending above the railway lines and offering the users a magnificent panoramic view of the cultural landscape. Moreover, Køge Nord Station is an important pillar and catalyst in the larger vision plan for Køge and the larger region, which places a high priority on attracting qualified labor and creating optimal, green and sustainable transport options in the area. It is our hope, and our firm conviction, that Køge Nord Station will contribute to this future vision.” 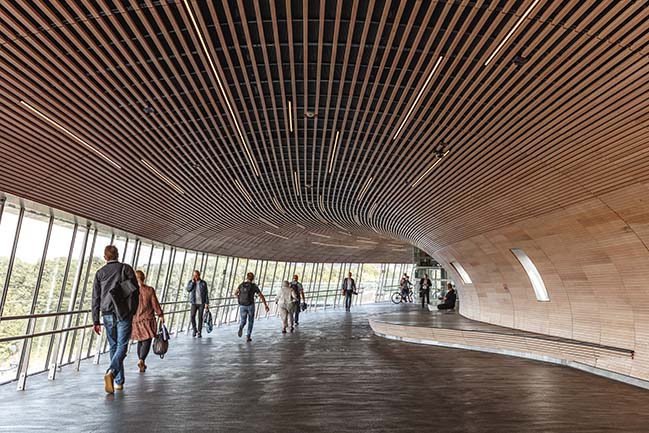 The station architecture and technical design promote ’the good travel experience’, where the flow inside the covered bridge is designed to offer both an open view to the north and smaller apertures in the interior wood panels toward the south. That offers views of the outside and an intimate feel as well as a good flow and zones for pausing:

”People spend many hours of their life in transit. That’s why we sought to give the footbridge a quality that goes beyond the purely functional and practical: The interior space is covered with wooden slats that provide a warm, tactile experience in transit and waiting situations. It is, quite simply, a welcoming and inviting space, unlike what you often see in stations and transport facilities. The interior space is contrasted by the smooth, cool aluminum exterior that enters into a dialogue with the infrastructural expression of the place. Banedanmark took a bold and visionary approach, both when they announced the competition and when they picked the winning proposal. As a result, we can now enjoy an architectural beacon capable of branding the region and demonstrating the capability of Danish architects and engineers. The bridge has ”postcard potential”, but the main point is the effect and the influence the project will have on so many people’s everyday life”, says Jesper B. Henriksen, architect and partner at DISSING+WEITLING architecture. 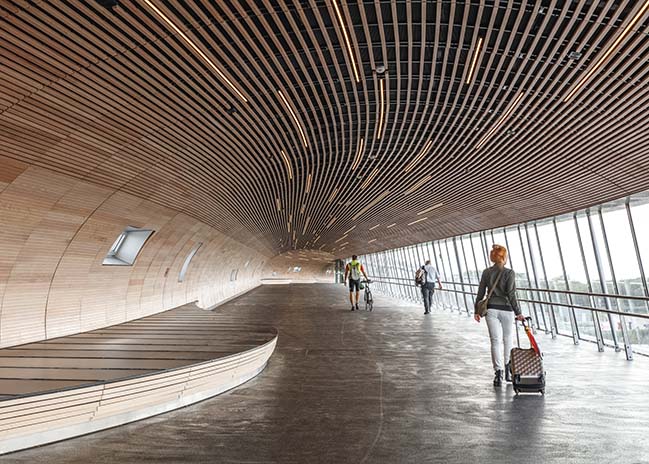 YOU MAY ALSO LIKE: Ultra-Fast Charging Stations for vehicles designed by COBE 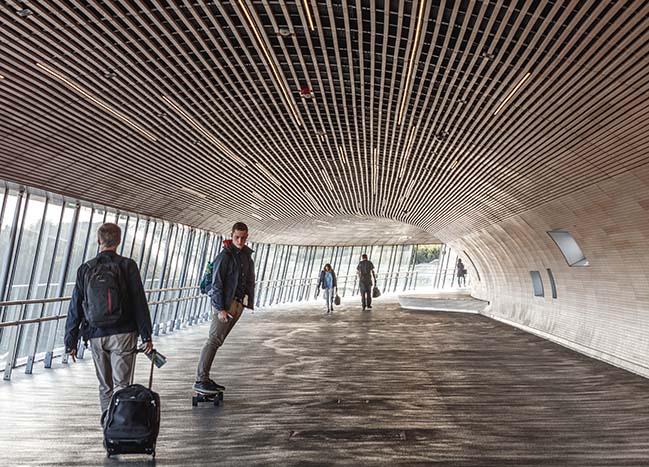 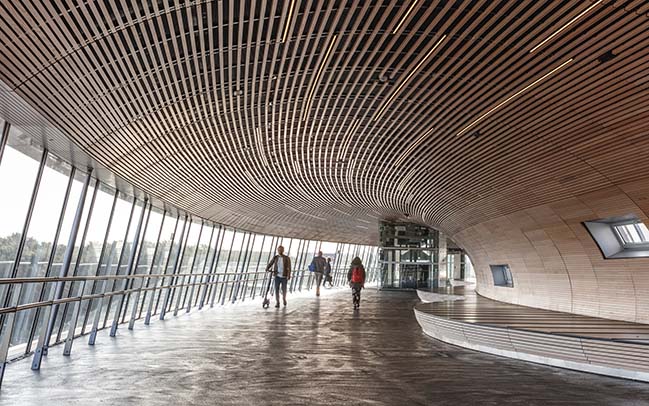 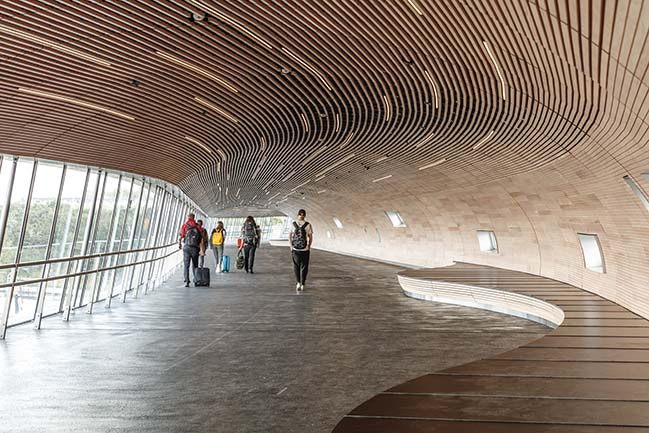 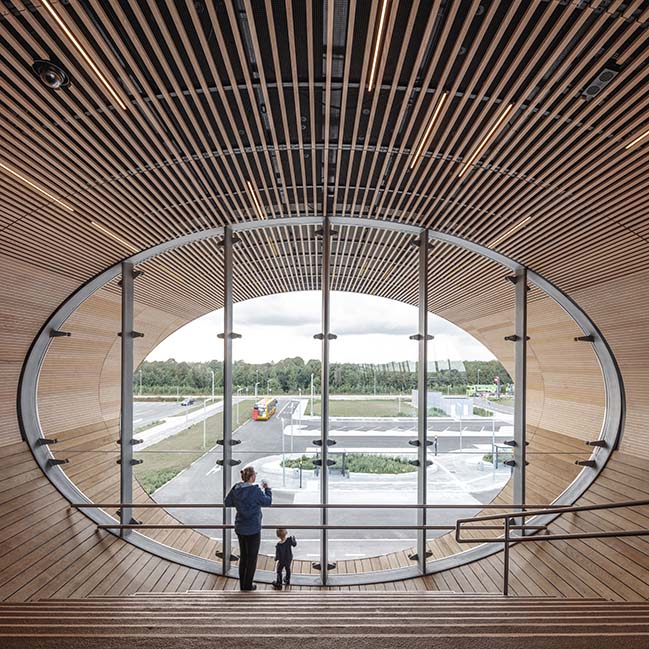 YOU MAY ALSO LIKE: The Maersk Tower in Denmark by C.F. Møller Architects 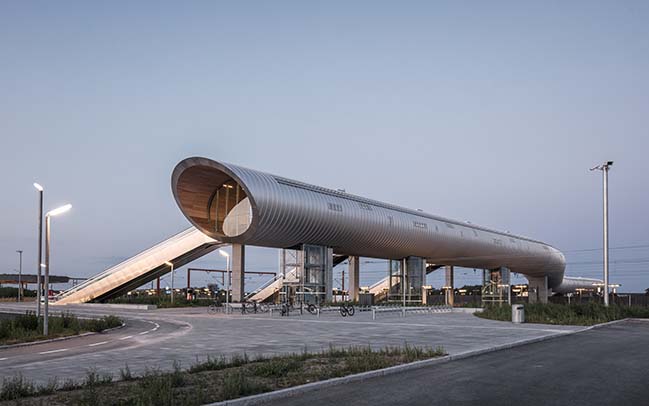 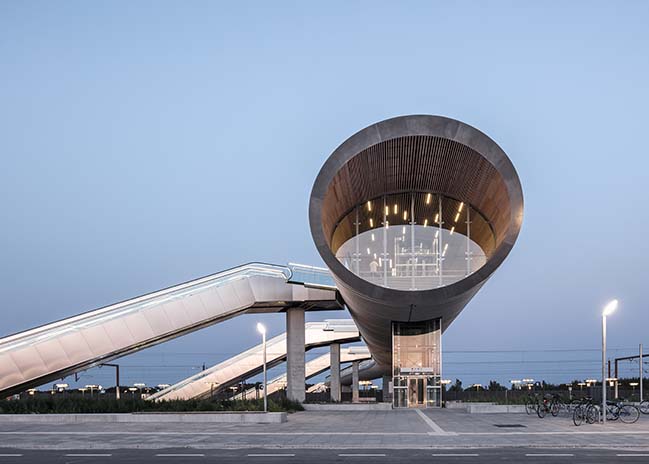 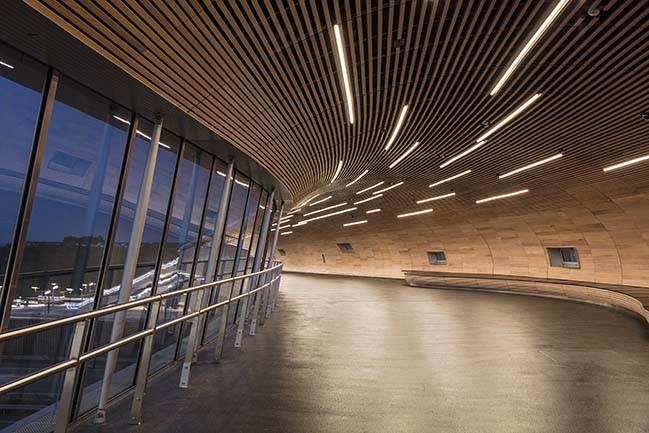 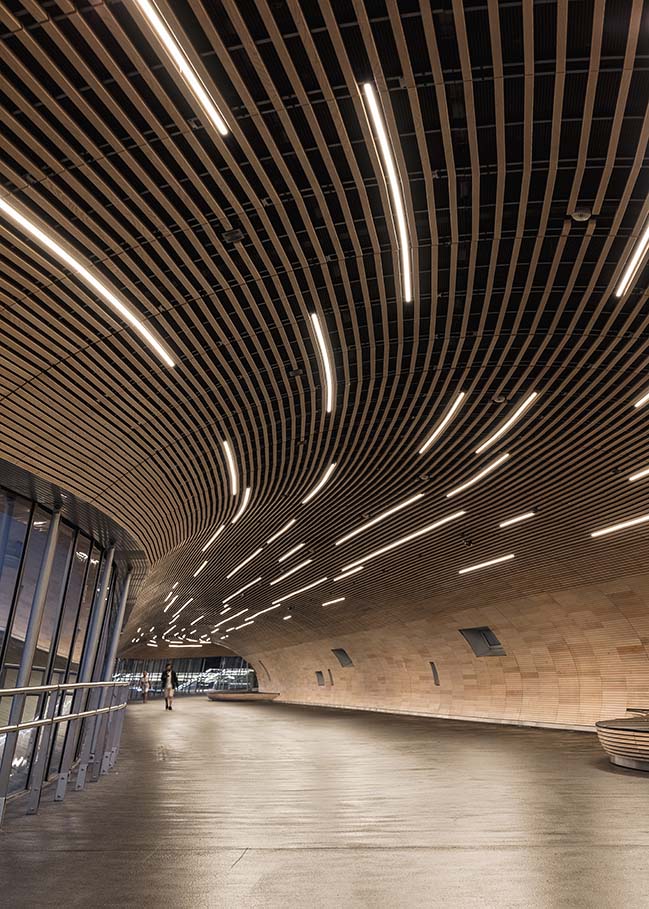 YOU MAY ALSO LIKE: Roskilde Festival Folk High School designed by COBE and MVRDV is completed 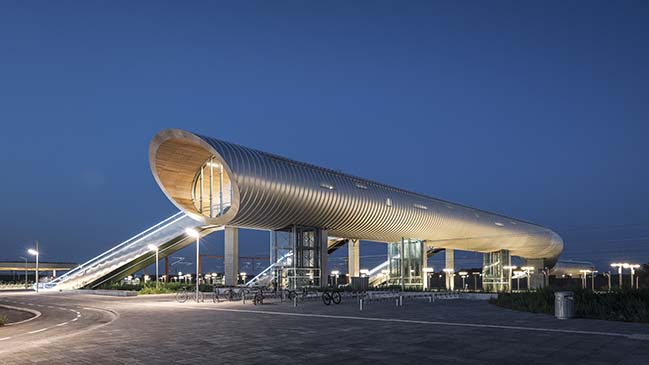