A new high-rise building makes its impact on the skyline of Hangzhou, the Chinese metropolis with 9 million inhabitants. 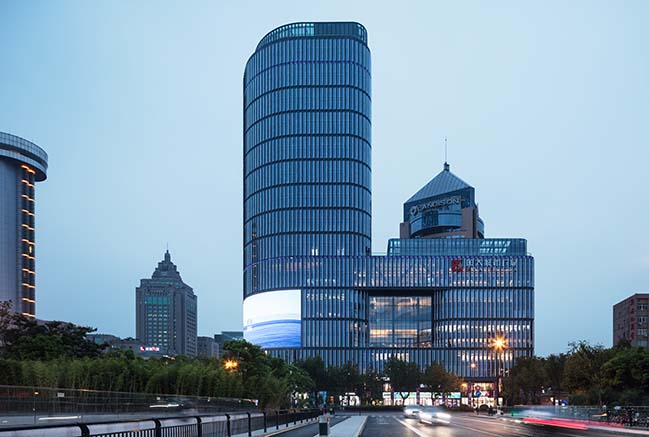 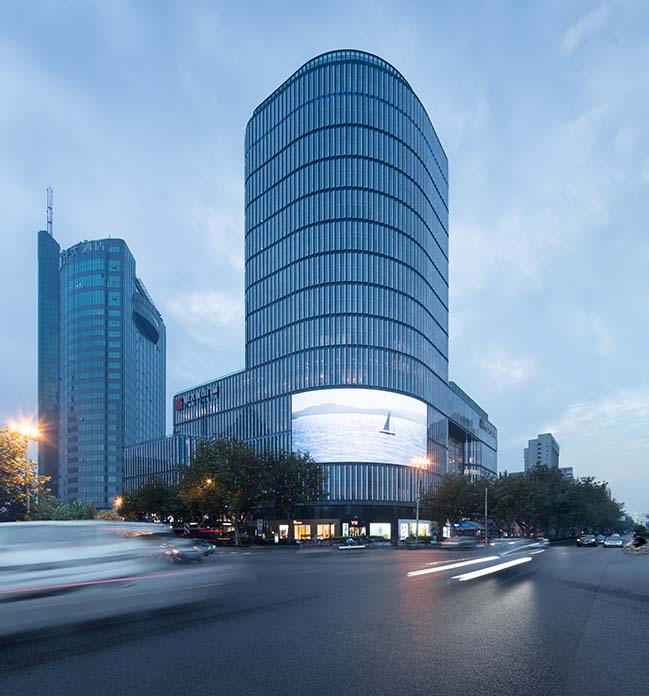 From the architect: The 130-meter-high tower is part of the extension and redesign of the GDA Plaza, a business center in the traditional business quarter of the city, which includes a shopping mall and hotel. Architects von Gerkan, Marg and Partners (gmp), who had previously won the competition, were in charge of the design and implementation. 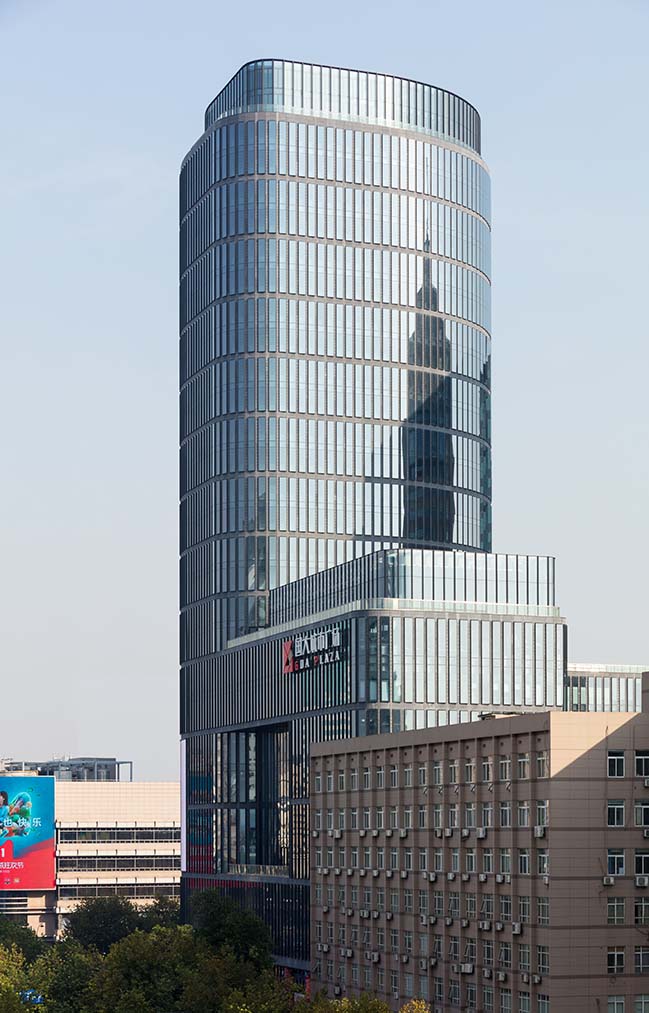 West Lake is considered a focal point and special attraction of the old, traditional city of Hangzhou. Its exemplary cultivated landscape is an outstanding feature of this 9-million-person metropolis to the south-west of Shanghai and, in 2011, was designated a UNESCO World Cultural Heritage site. At Wulin Square, in the midst of the flourishing business center not far from the lake, the GDA Plaza Hotel and Business Center was reopened. As part of a redesign and extension, the existing complex with hotel and shopping mall was recreated and made into a completely new unit. The architects von Gerkan, Marg and Partners (gmp), who had previously won the competition in 2007, were in charge of the design and implementation. At one cor-ner, the GDA Plaza was substantially extended by a new 28-story building with a gross floor area of 57,500 square meters, whilst the existing main building was retained as far as possible but completely reorganized. This has created additional offices and commercial premises, as well as new leisure facilities such as cinemas and restaurants. 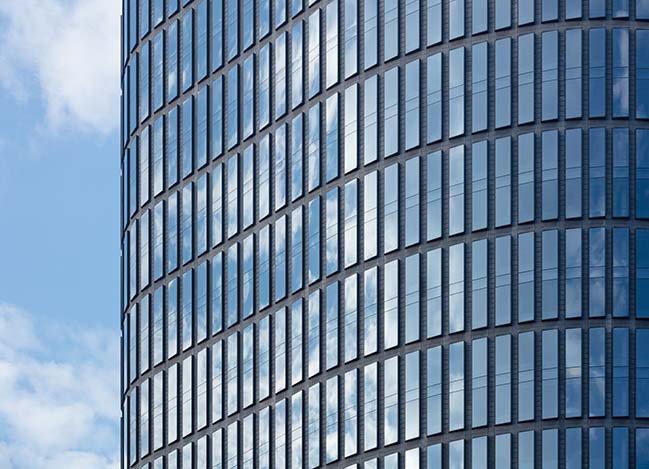 The office and hotel tower faces the city and fits exactly into the corner site between Yan’an Road and Tiyuchang Road. With a height of 130 meters, the high-rise building makes an impact on the city’s skyline. With its elliptical curved form, the tower supplements the two immediately adjacent high-rise buildings: the triangular Radisson Hotel with its rounded corners, and a semicircular office building, both of approximately the same height. 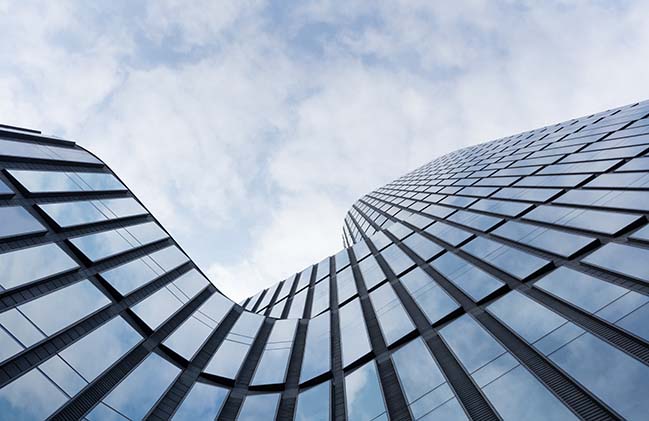 In order to achieve a uniform architectural effect for the entire building complex, the new building has been linked with the existing ones via a ten-story plinth. Recesses between the old and new parts of the buildings make these transitions visible. The ten-story plinth, with a gross floor area of 17,997 square meters, supple-ments the hotel, retail, and commercial area. All areas are flexible in use; in the new tower in particular, areas can be reconfigured from an office to hotel function at any time. From the Radisson Hotel, the new build-ing can be reached via direct link passages on the plinth floors. The internal circulation systems follow the geometry of the elliptical high-rise building. Behind the new shopping mall, a pedestrian route has created an additional passage through the building complex from the two main roads to the hotel. Below ground, the GDA Plaza is connected to the Metro. 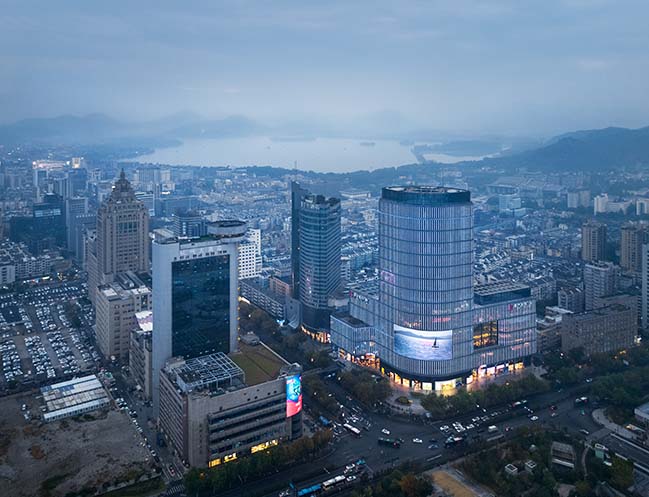 The design of the facade enhances the uniform architectural effect of the entire building complex. With its curved and dynamic shape, the facade envelops the building and creates flowing transitions between the newly clad old part and the new building, as well as a harmonious link to the old Radisson Hotel tower. Two-story box-type windows with a vertical emphasis and horizontal lines provide a structure to the facade. 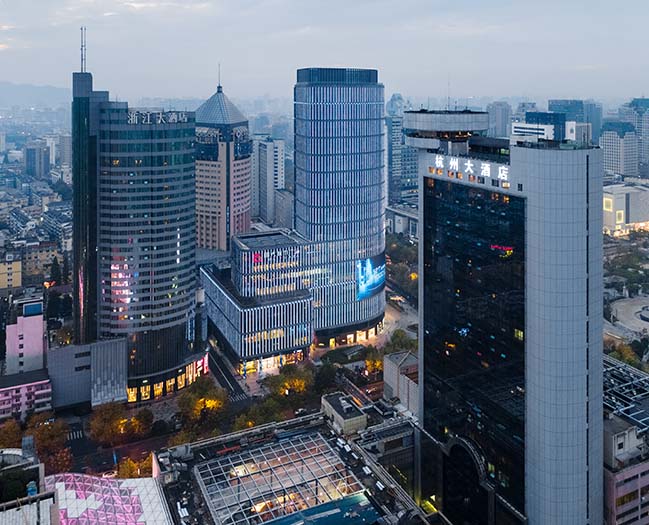 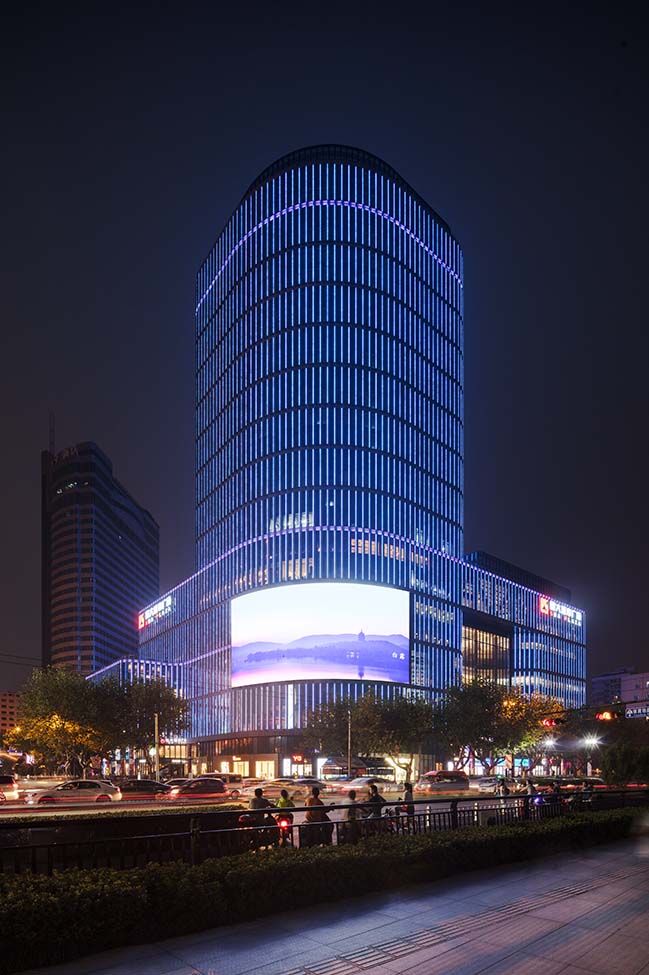 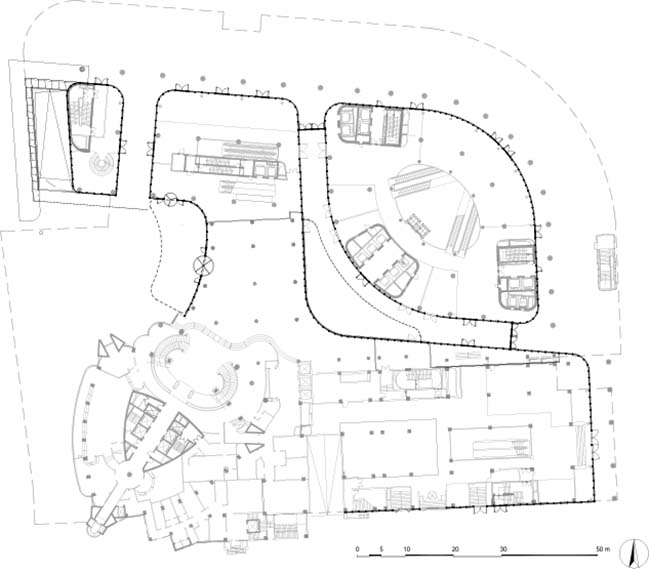 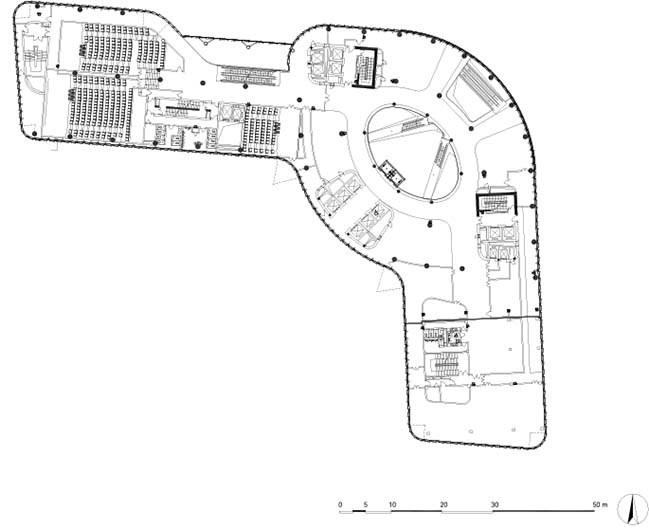 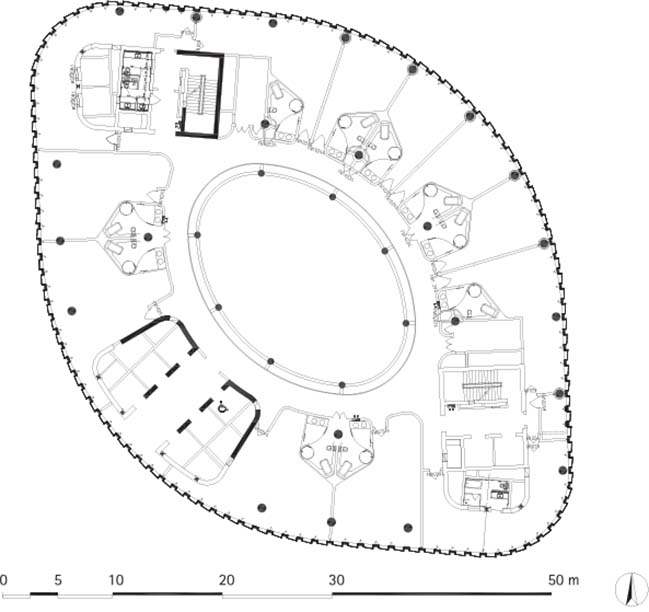 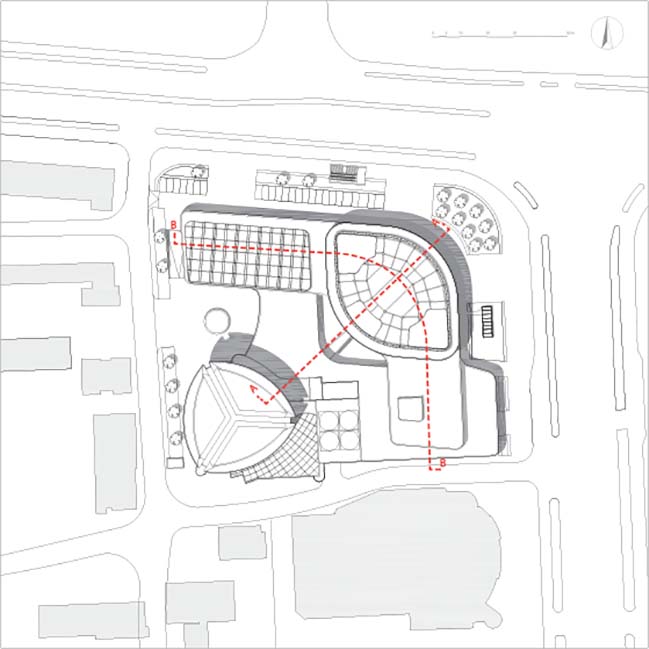 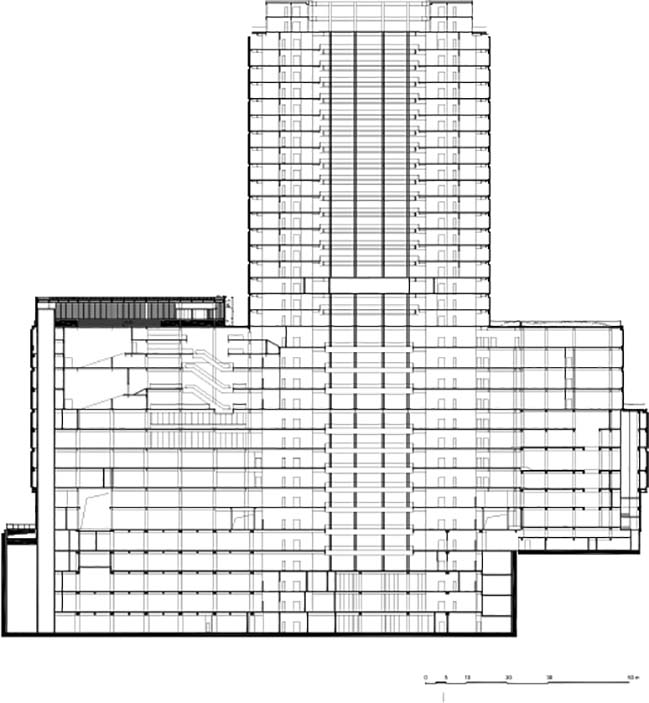 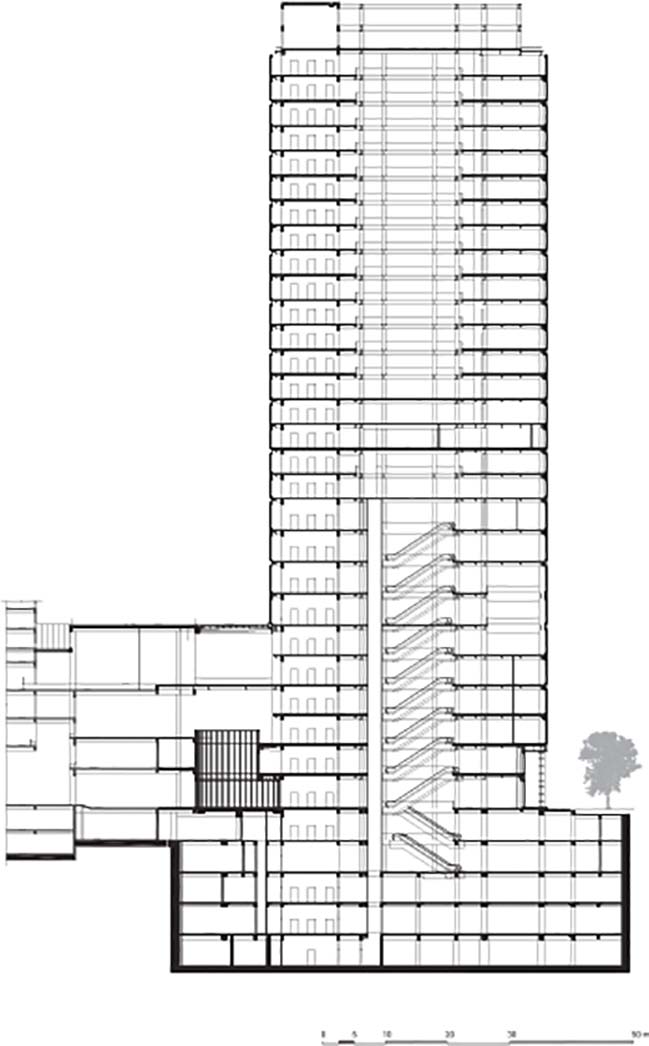 09 / 05 / 2019 A new high-rise building makes its impact on the skyline of Hangzhou, the Chinese metropolis with 9 million inhabitants...