The Italy Pavilion is located on the Cardo, which is one of the two perpendicular axes of the Milan Expo 2015 site, along with the Decumanus. The design chosen for the Italy Pavilion was the winning project in an international competition adjudicated by Expo 2015 S.p.A. in April 2013. In total, 68 architectural practices took part, but the winning design came from Nemesi & Partners in association with Proger and BMS Progetti (for the structural engineering and installations) and Prof. Livio De Santoli (for building sustainability)

From the architects: The Italy Pavilion consists of the creation of Palazzo Italia (c. 13,200m2 with 6 aboveground storeys) and some temporary buildings along the Cardo (c. 13,700m2 with 3 aboveground storeys). Experimentation lies at the very heart of the design. The hallmarks of Nemesi's project are the use of innovative technology and a sustainable approach. These elements merge with the expertise and skills of the Italian companies involved in building the pavilion to make it a symbolic hub of contemporary creativity. 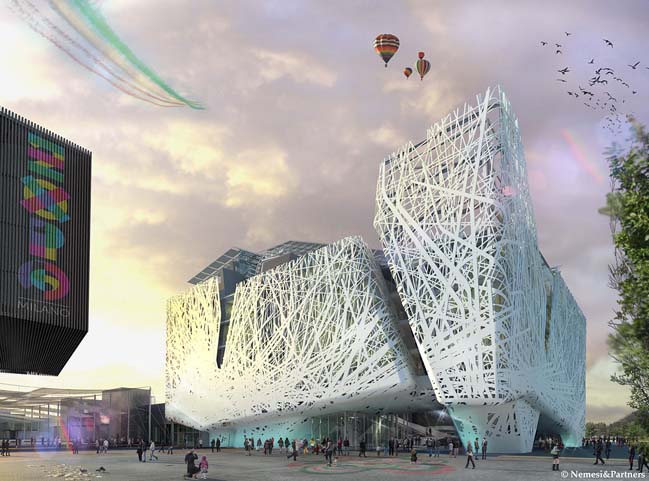 Palazzo Italia is a genuine landmark on the Expo site, standing out because of its architecture and its location on one of the four cardinal points - the northern one. It also provides a scenic backdrop for Viale del Cardo, which runs right across the site. Palazzo Italia draws on the concept of an "urban forest", with the "branched" outer envelope designed by Nemesi to simultaneously conjure up primitive and technological images.  The weave of lines creates a play of light, shadow, solids and voids that generates a sculpture-like building with clear hints of land art. 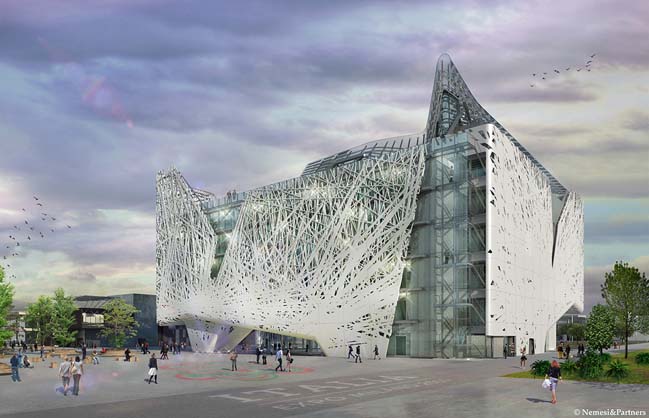 For Nemesi, the spark for Palazzo Italia was a concept of cohesion in which the force of attraction generates a rediscovered sense of community and belonging. The internal piazza represents the community's energy. This space - the symbolic heart of the complex - is the starting point for the exhibition route, in the midst of the four volumes that make up Palazzo Italia. These four constructions could be part of a cityscape, but in reality, they house the Exhibition zone (West), the Auditorium and Events zone (South), the Office zone (North) and the Conference and Meeting zone (East). The volumes are symbols of giant trees, with massive bases that simulate great roots plunging into the earth. Seen from the internal piazza, they open up and become longer as you look up, visually forming a canopy beyond the giant glazed roof.   The rich weave of branches that forms the outer envelope helps to highlight the sculpted shapes of Palazzo Italia.  Nemesi used a unique geometric design to create this outer "skin", recalling an unplanned weave of branches and creating architecture within architecture. 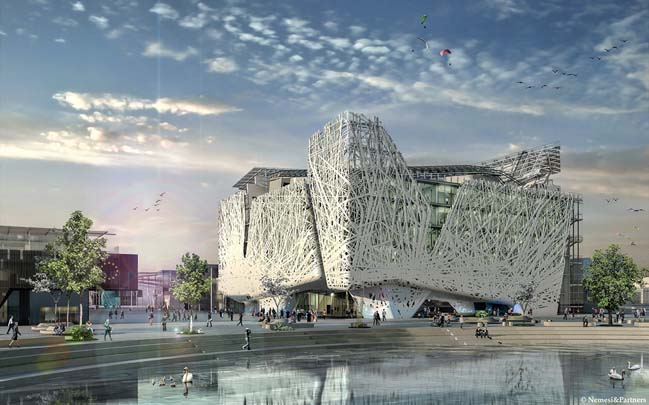 Nemesi designed the exhibition layout of Palazzo Italia to be a gradual journey to discover and understand the shapes and content of this special architectural landscape. The route starts from the internal piazza, a great hall in which visitors are welcomed and the curved, inclined elevations give the volumes a sense of fluidity and dynamism, forming a space of genuine beauty. The great flight of steps that rises up from the square crosses this area longitudinally to visually connect all the floors. The triple-height space from the second to the fourth storey is like a giant "hanging" shell that, visible from the piazza, houses the Exhibition zone. 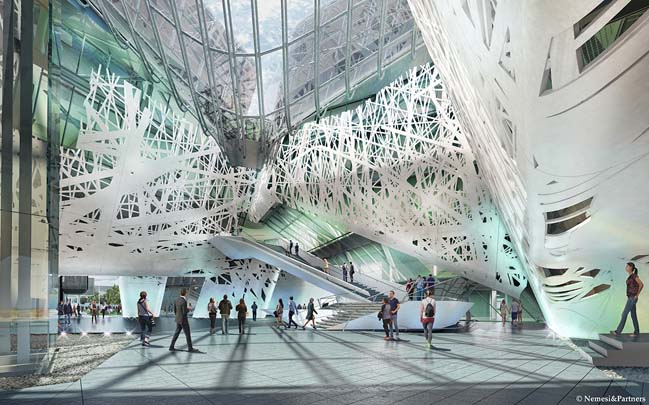 Palazzo Italia has spaces to host events on the ground floor and, on the upper floors, exhibition areas, meeting and conference rooms, and elegant open and eating areas, including a top class restaurant on the fourth floor and a panoramic terrace. The building will also have space for various institutions, including the Italian Government, and areas to showcase Made in Italy excellence.

In designing Palazzo Italia, importance was placed on sustainability and on making it practically a zero energy building through the use, among other aspects, of photovoltaic glass for the roof and photocatalytic concrete in the outer envelope. The full 9,000m2 of the external façade of Palazzo Italia will be clad in 900 i.active BIODYNAMIC concrete panels with Italcementi's patented TX Active technology. When this material comes into contact with light, it can "capture" pollution in the air, transforming it into inert salts and reducing smog levels.  The mortar used is 80% recycled aggregates, including scrap material from marble quarries in Carrara that helps add more lustre than in traditional white cement. This new material is also very "dynamic", enabling the creation of fluid designs like the complex shapes used for the panels that are part of the construction of Palazzo Italia. 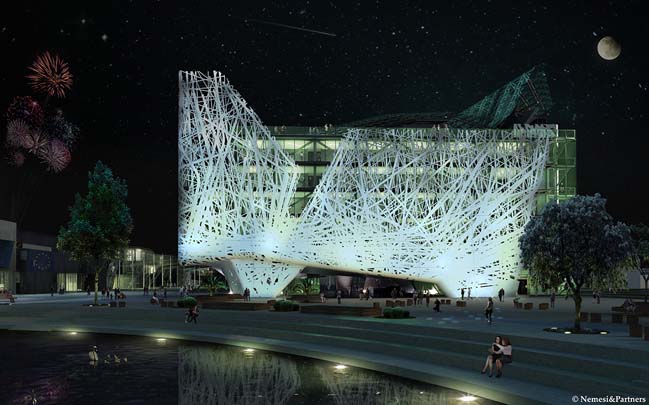 Each panel for the external envelope is unique and will be created using Styl-Comp technology. The roof designed by Nemesi for Palazzo Italia will be an innovative "sail" created by Stahlbau Pichler. It will be an interpretation of a forest canopy, with photovoltaic glass and flat and curved geometric shapes (often squares). Together with the building's envelope of "branches", it will be a manifest expression of innovation in design and technology. The roof reaches its architectural height above the inner piazza, where a massive glazed conical skylight "hangs" over the square and the central steps, radiating natural light.

The Italy Pavilion includes a series of temporary buildings that will look out onto the Cardo, a paved road spanning 35m and running for 325m from Piazza d’Acqua in the north to the square on Via d’Acqua in the south. These are being built using "dry" technology to facility their removal and relocation when the Expo ends.

Nemesi used the idea of an Italian village to develop the buildings along the Cardo, creating volumes juxtaposed with small squares, terraces and covered walkways. Different geometric shapes, at times overhanging, are assembled to almost form a giant mosaic in which each piece has its own design and autonomy. The ground and first floors are often little squares produced by the alternation of architectonic volumes.

The buildings along the Cardo will represent the different parts of Italy, especially the regions, providing them with meeting and exhibition areas. The area facing Palazzo Italia, along the northern part of the Cardo, will be used for the institutions, exhibitions and meetings that fall under the European Union Pavilion, providing a symbol of the close ties between Europe and Italy. The buildings along the Cardo include the European Union Pavilion, exhibition areas, spaces for events and meetings, eating areas and terraces.

05 / 28 / 2015 The Italy Pavilion is located on the Cardo, which is one of the two perpendicular axes of the Milan Expo 2015 site, along with the Decumanus