architecture in japan, coelacanth and associates 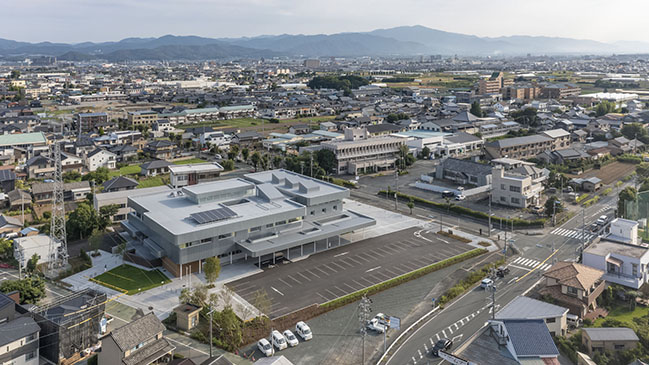 From the architect: The design was selected in a 2017 competition. The spatial appeal of a mixed-use buildings such as this comes largely from its handling of common areas. While individual spaces such as the meeting rooms, music studio, event hall, and kitchen are of course also important, it is the natural overflow of sounds, sights, and other hints of activity into the common areas that gives the facility as a whole its vibrancy. 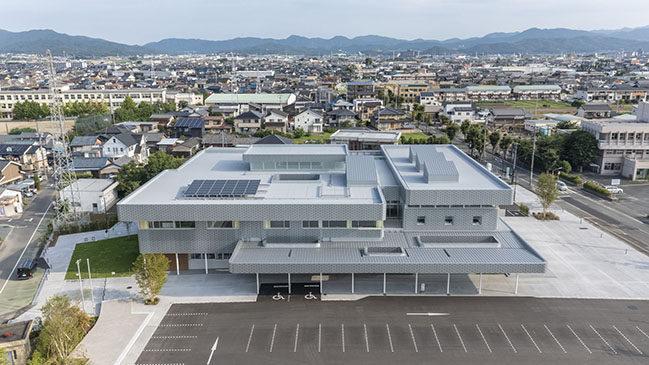 The building is two stories high in most areas, except the central common area, which has a three-story-high (12 m) ceiling and a long, narrow footprint measuring 40 m long by 10 m wide. On the first floor, this central area is flanked on both sides by the city office, children’s center, kitchen, event hall, and several other rooms, making it the heart of the building. On the second floor, a void occupies the central space, surrounded by a ring-shaped common area that connects to an outer ring of community center rooms and the library. 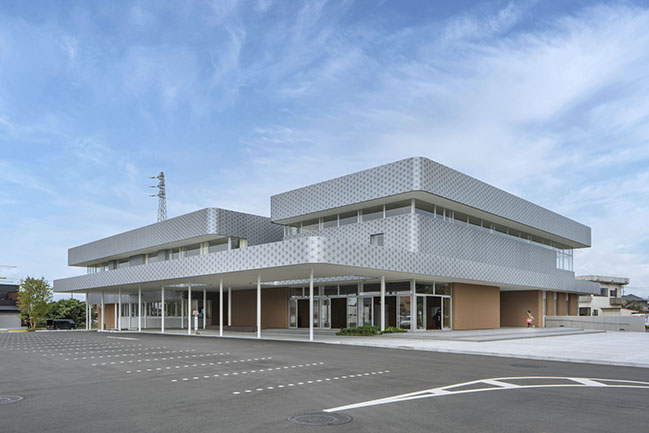 On both the first and second floors, this long, narrow, tall core space includes zones with varying ceiling height, small courtyards, and connections to large volumes such as the library and children’s center, yielding spaces of different scales for people to spend time in. 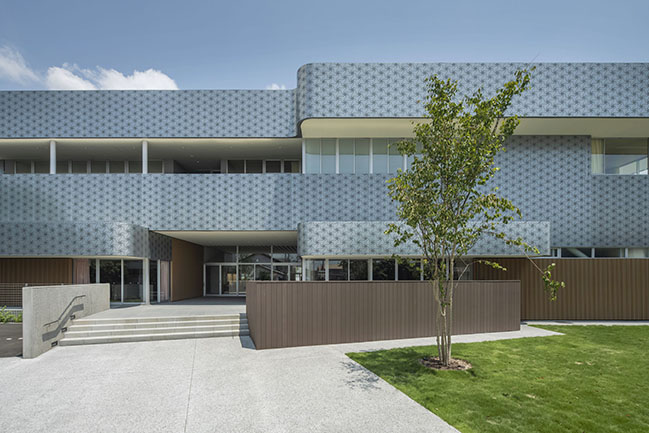 On the second floor, the void is surrounded by a built-in feature called the Oval. The Oval is a single unit of furniture with a 60-meter circumference that incorporates magazine racks, display stands, tables, sofas, and benches, allowing users to spend time as they choose, either alone or in groups. Clerestory windows above the void bring in natural light and ventilation when desired, lowering the energy requirements for lighting and air conditioning. 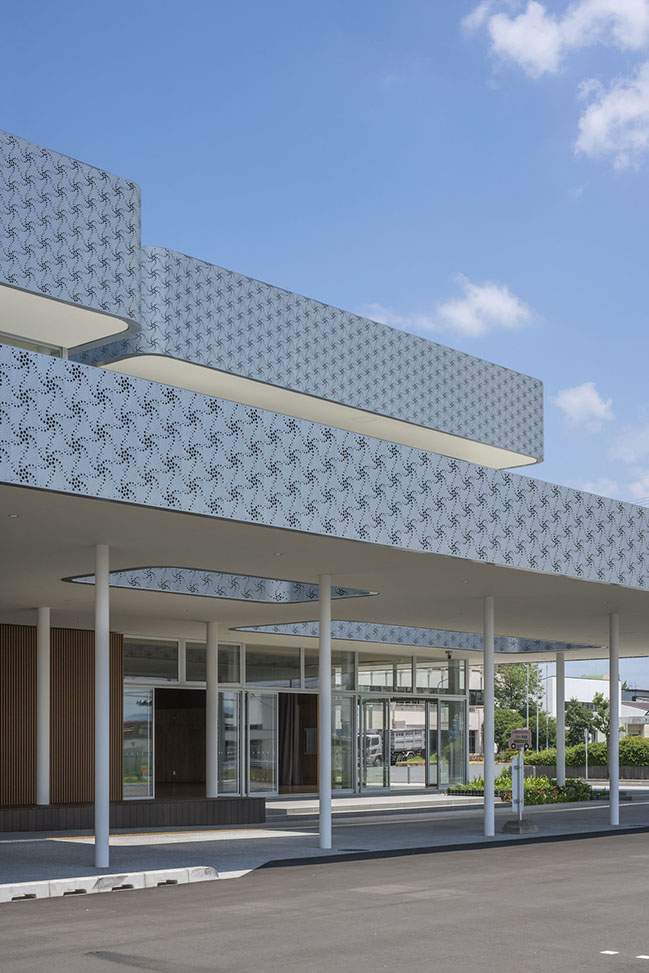 The exterior design contains symbolic elements appropriate for a core neighborhood facility and is intended to be a beloved part of the community for years to come. The façade consists of metal panels perforated with a stylized motif based on pinwheels used at traditional shrine festivals in the neighborhood, giving local residents a sense of ownership and belonging. The panels are extremely weather resistant, reducing maintenance costs over the long term. In addition, to allow the facility to be used for neighborhood festivals, the exterior is linked to the event hall and the roof has deep eaves that open up many possible uses. 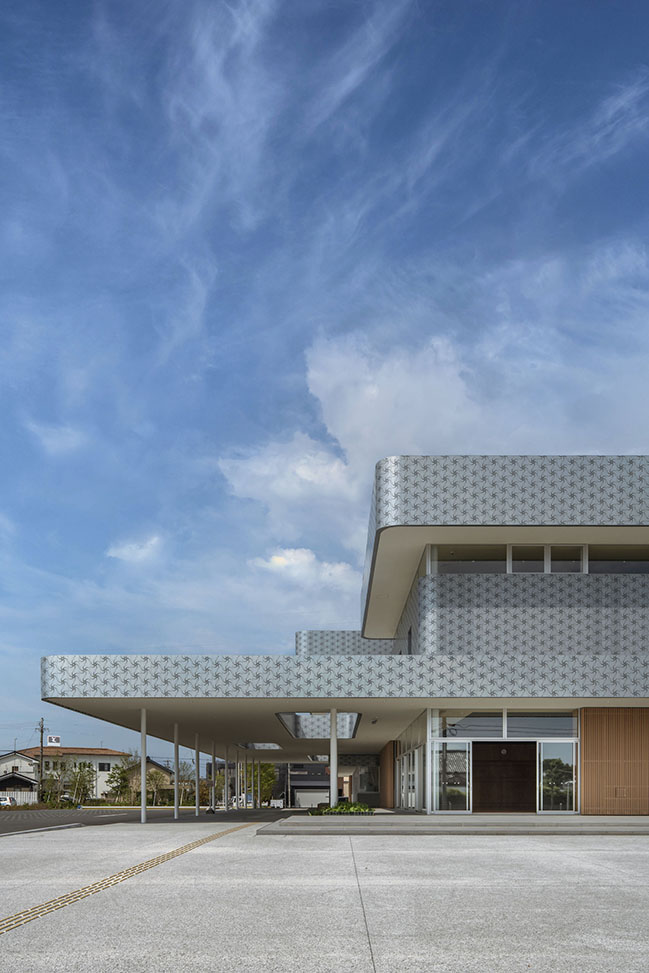 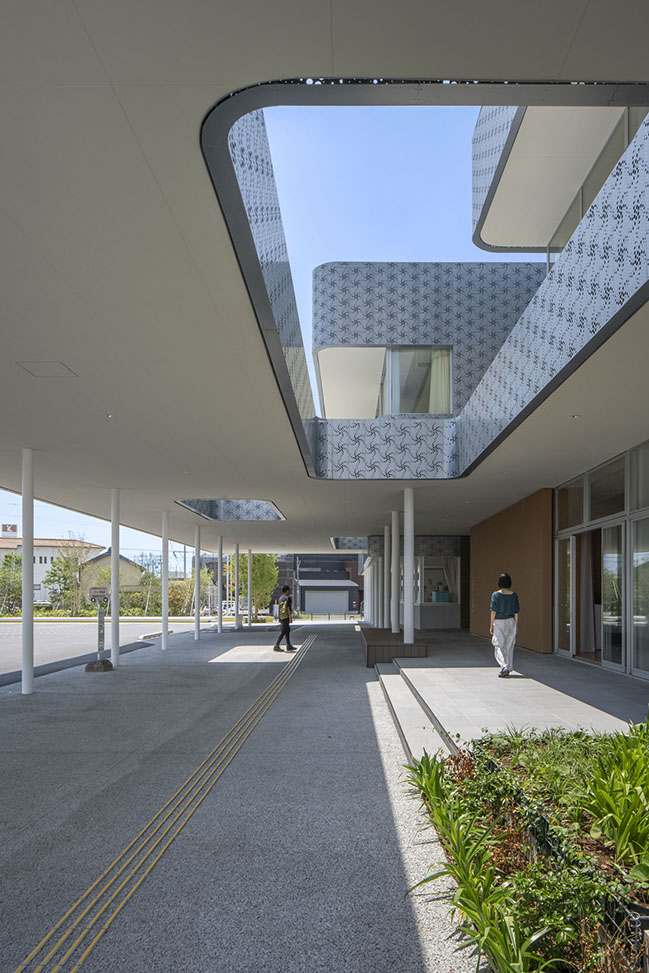 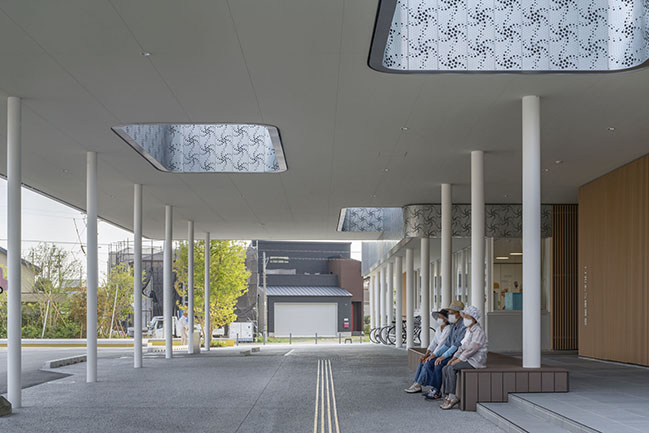 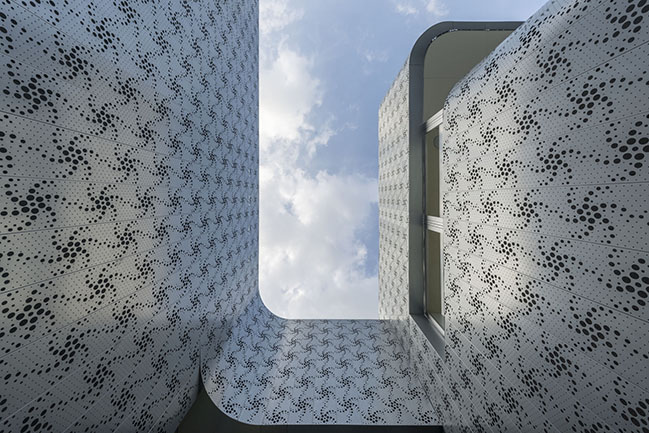 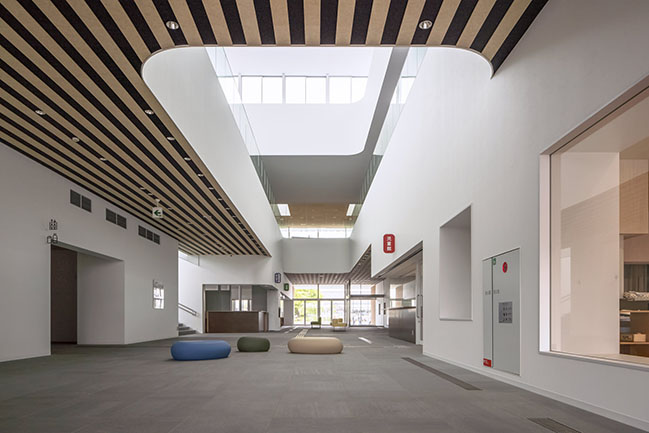 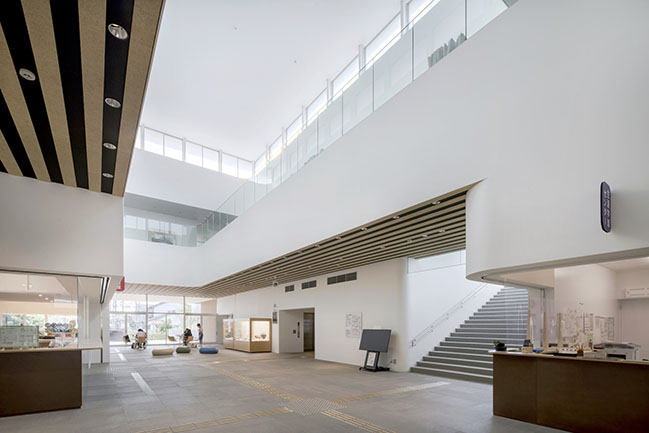 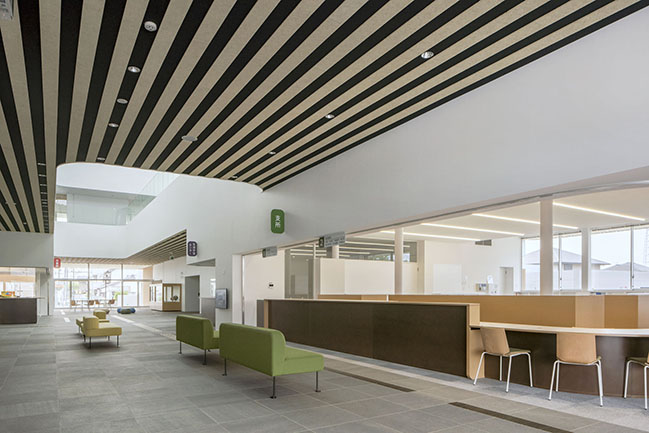 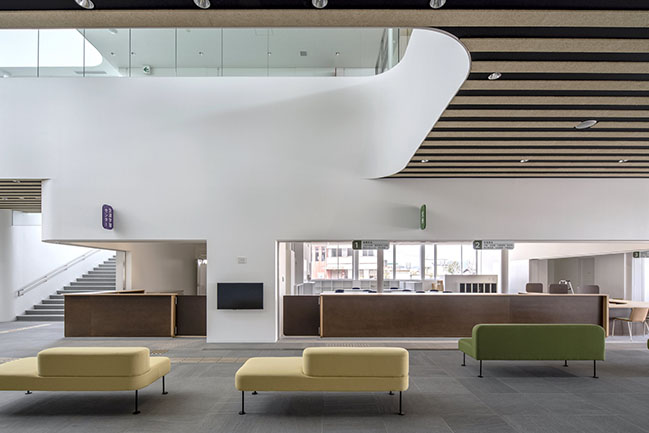 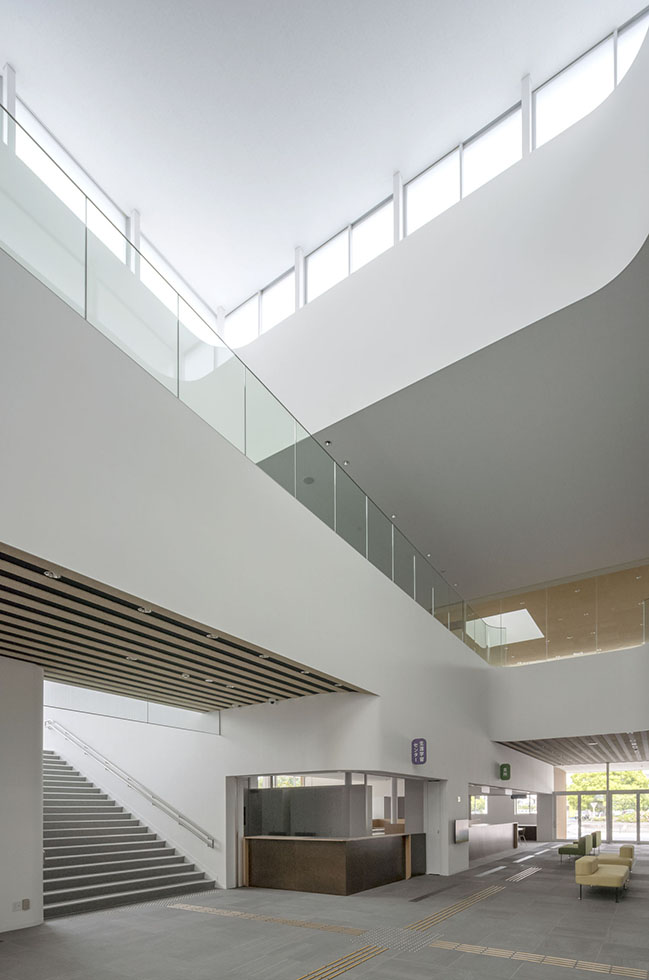 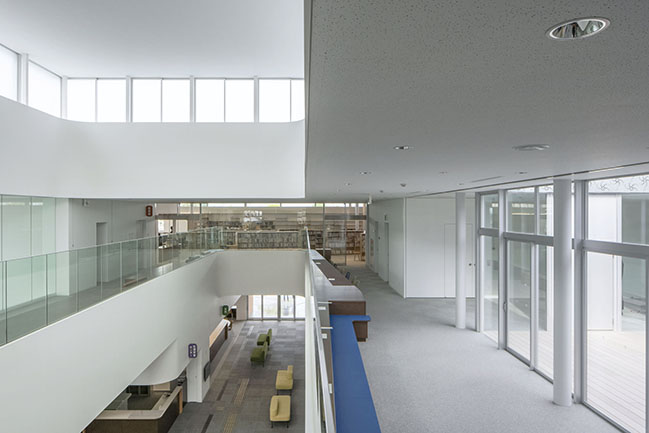 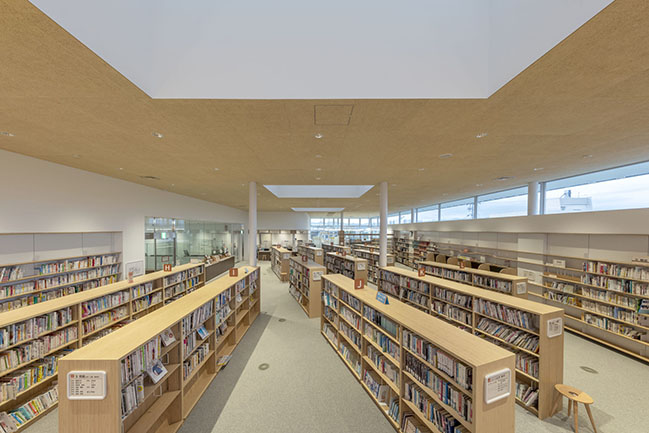 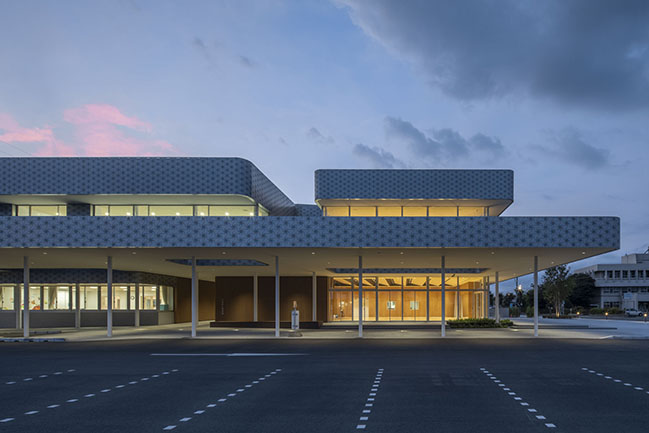 Recommended post: BOGEN by noa* | The Bistro Of Flowers