The Dominique Perrault Architecte has won the 1st prize in the Internationcal competition for the Gangnam International Transit Center in Seoul. 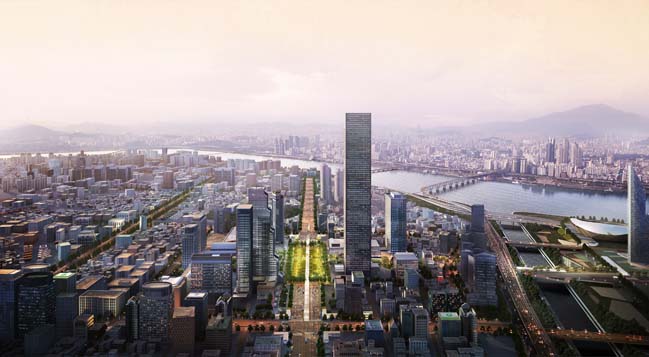 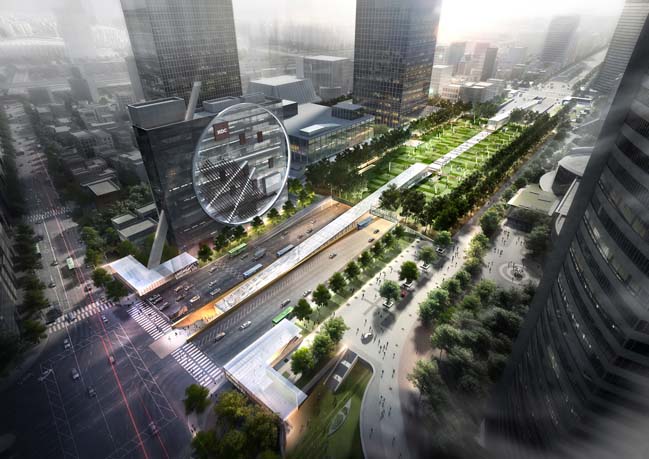 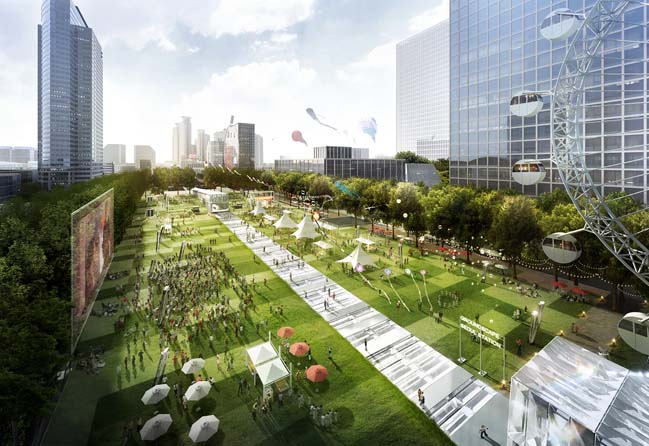 The Lightwalk is not only an architectural component, it also is a part of the territory and the ground of the city. Defined as a Land Art intervention, it belongs to the city scale, in dialogue with the Han River and Tancheon Stream and the mountains in the background.

It is a minimalistic, yet incredibly powerful gesture, which marks the presence of a new major integrated public transportation station for the city of Seoul. Spanning between the two main road of the Gangnam district, Bongeunsaro and Teheranro, the Lightwalk creates a landscape intervention linking the two axis and acts as an orientation mark from all sides. Like a ruler, a single line marks the territory and gives a measurement unit, in otherwise out of urban fabric scale, made out of stretched wide streets and skyscrapers such as a future GBC tower. The Lightwalk creates a new horizon. Rooted in the ground, it is the symbol of a renewed Seoul, which aims to become more pedestrian friendly, a landmark for all underground infrastructures worldwide, where users can experience natural light and air, deep into the ground, in the Groundscape. 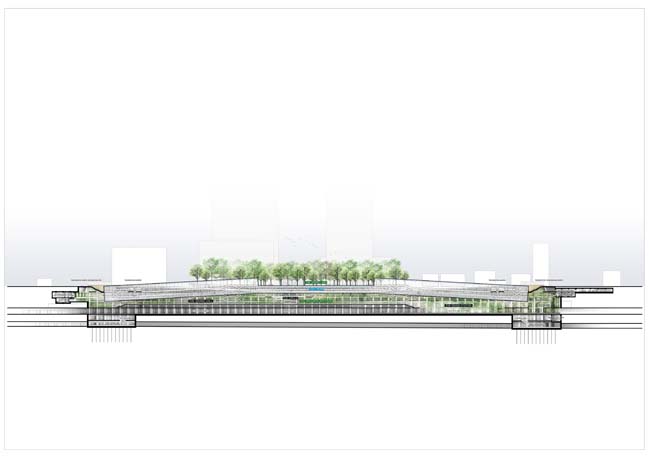 The Green Land : new heart of Gangnam
Implementing an airport size infrastructure in the middle of the city fabric implies a careful attention to ensure that the weaving of this new element will perfectly fit within the existing city while creating new links and comforts rather than boundaries or limits.

The cohesion of Seoul International District is made through a strong emphasis on a green network which weave all streets and plots together from the Jamsil MICE district in the East to the COEX to the West. Pedestrians will be offered a continuous tree canopy to experience a renewed urban quality leading to a new major landmark park offered to all Seoul habitants: The Green Land 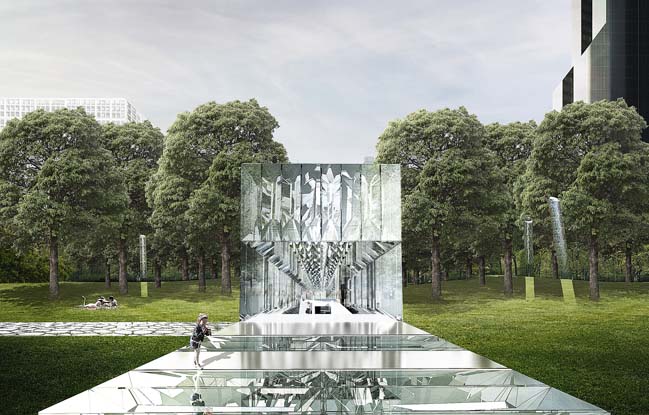 An Urban square, a domestic scale
To a much different scale, the Green Land, covering about 28 000 sqm, will be Gangnam’s response to New York’s central park or London’s Hyde Park. It will become the central point of the new green network in order to become the green heart of the Seoul International District, creating a new centrality between the COEX and the GBC. In order to develop and strengthen the existing green network, existing tree rows are extended and new ones added, establishing a ‘Green Weave‘ at the district scale, stretching from ‘The Green Land’ towards the eastern riverfront. The new planting strategy connects the existing green structures bordering the site but also extends throughout the district.

He’s protected on four sides by a double line of high canopy trees covering an intimate promanade in reference to the Palais Royal Garden in Paris. The tree frame creates a foreground allowing a transition between intimate human scale on ground level and the city scale of the surrounding towers as well as an acoustic shield from the hustle and bustle of the street. Everyday users will find pocket parks and a variety of ambiances to enjoy such as kid’s playground, relaxing areas, cafes, kiosks, amenities and services. 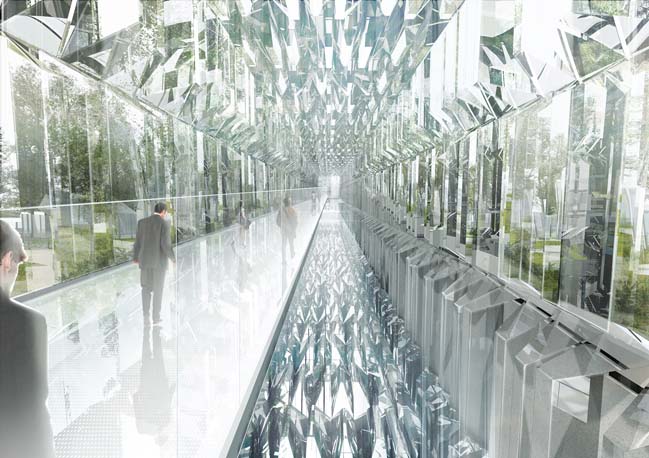 Flexibility of Uses / Seasonal Changes
The central meadow is designed to allow the greatest flexibility of uses during the year, a space
where everything becomes possible. Through its flexibility the park, like the trees and flowers will
express the passing of time and the changing of season, allowing a wide variety of activities to take place along the year, from simply relaxing on the grass to a concert or a fireworks, a fair in spring, a festival in autumn, ice skating in winter, open air cinema or a food market in summer.  Yet, the ring of trees circling the Green Land will feature high canopy evergreen trees, so as to ensure it provides shelter and comfort all year around. 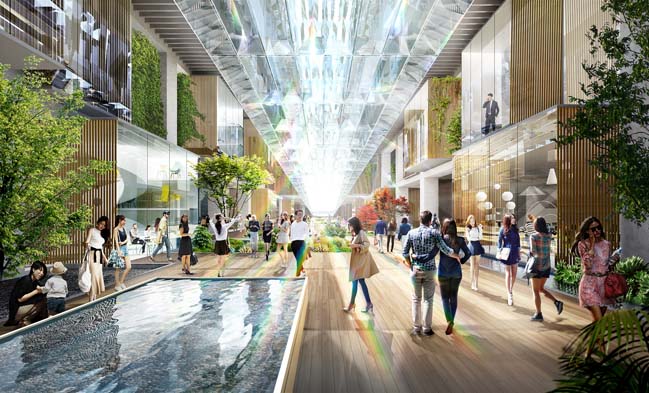 The Great Hall
On the Northern tip, a more intimate volume in direct contact with the light beam offers incredible natural light and closest connections to above ground park. 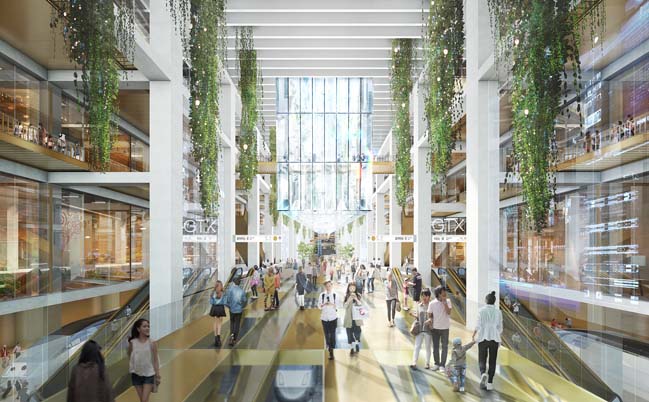 The Grand Station
On the South tip, Seoul Grand Station is a reference to the worlds most iconic train stations. It is designed for a timeless experience and users comforts. All vertical circulations have been designed to ensure a smooth and seamless flow all the way up. 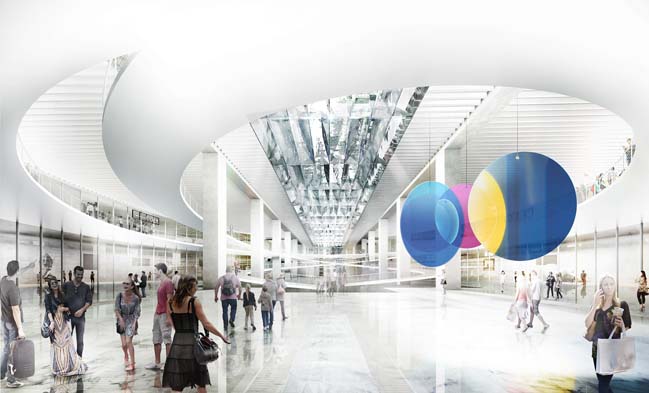 The underground park
The GITC will house a unique underground park. The interior programs are articulated around the groundscape park spanning all along the project, flooded by the natural light provided by the light beam. Greeneries will be installed everywhere possible, on the ground, walls, ceiling, natural and artificial, water features will be combined to create a unique park. A variety of gardens can be organized along the Groundscape park with a wide varieties of vegetation species and ambiances. 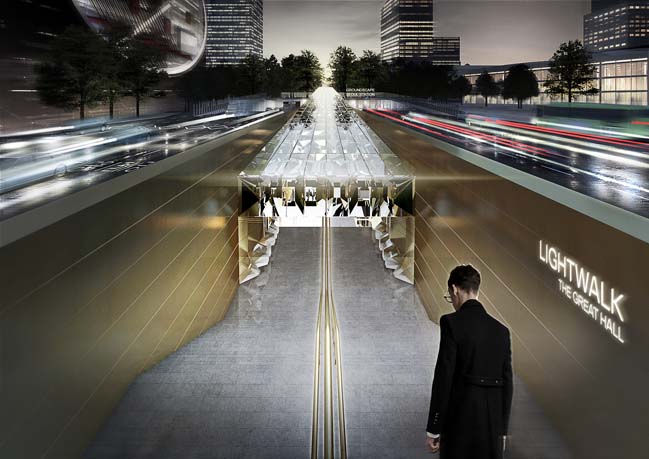 Follow the light
The Lightwalk is not a building. It is a designless intervention, an engineered masterpiece, bringing light deep into the soil crust, enlightening all the spaces of the new station below, and bringing new qualities to the above ground spaces. The Light beam is not only an optical device. Through its urban presence, it signals the entrances to the station below. Whether you arrive by foot, bus, car or train, the Light beam shows you the way in and out. Once inside, the light beam becomes a circulation guiding the public all the way down. As opposed to the usual damp and dark tunnels found in Seoul, the Light walk road will be fully lit by natural light on all sides. Along the Light beam, car and bus passengers will walk through a series of sunken gardens and sunlight pipes, creating an array of natural light. Train passengers will feel like they arrive in a traditional above ground train station as the light beam brings light deep below, creating the effect of arriving below a skylight roof, thus providing an ethereal sensation upon entering.

The light beam
In reference to French well known Pampille or Tassel system used to increase Chandelier candle light in the old days, the light beam is used as a technical and optical instrument for controlling light, temperature and humidity. The light beam is an optical installation creating a diffraction of the sunlight and amplifies its effects towards the lower levels. Through light beam, the interior spaces are flooded with natural light creating an interior atmosphere which feels like being outdoor.
With the light beam, the sunlight pipes collect and concentrate the sunlight above ground. The pipes introduce natural light below ground to ensure the indoor envi­ronmental quality. At night, it becomes moonlight pipes bring light on ground park and give a very special atmosphere. 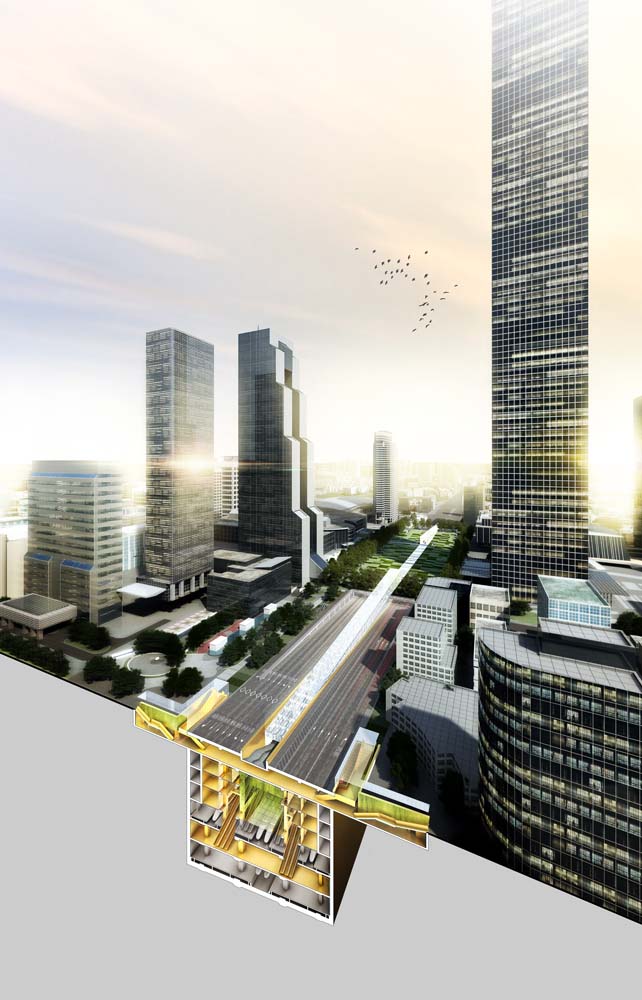 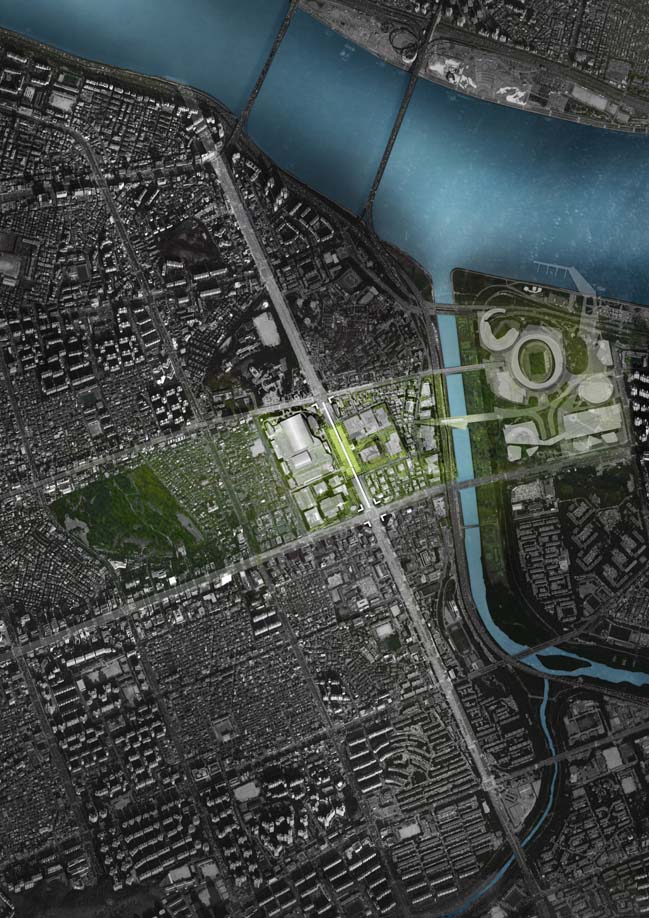 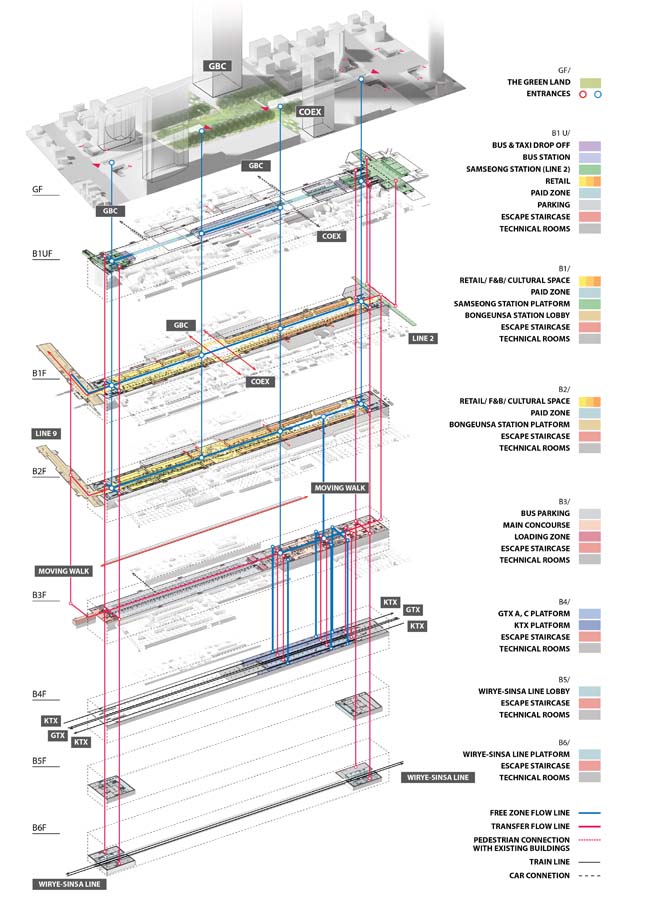 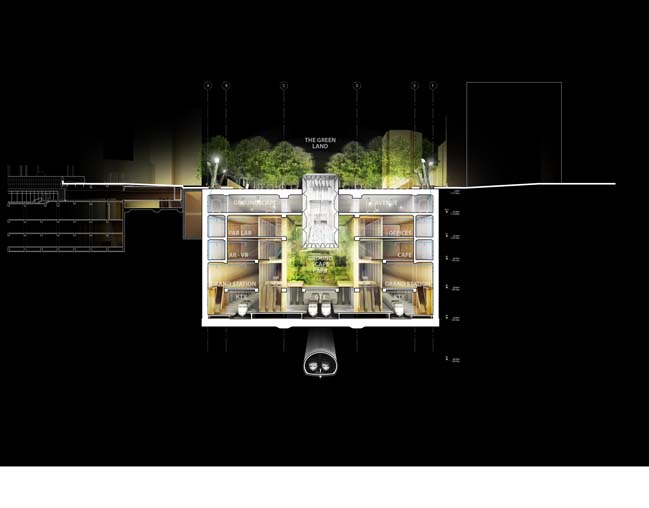 10 / 30 / 2017 The Dominique Perrault Architecte has won the 1st prize in the Internationcal competition for the Gangnam International Transit Center in Seoul.