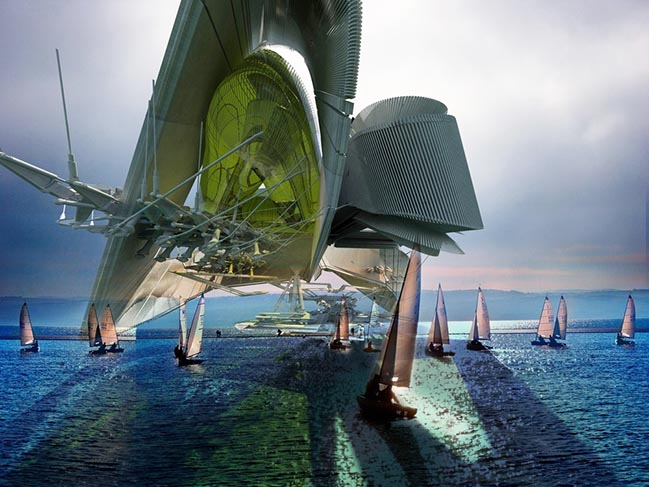 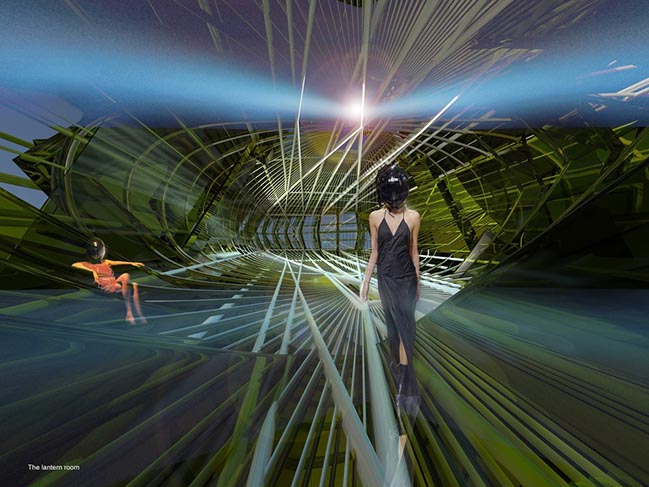 From the architect: New building typologies should replace redundant ones, creating symbiotic relationships between various programs and supporting renewable energy by harnessing it as part of the building's infrastructure, whereby interdisciplinary research helps define sustainable appropriation. 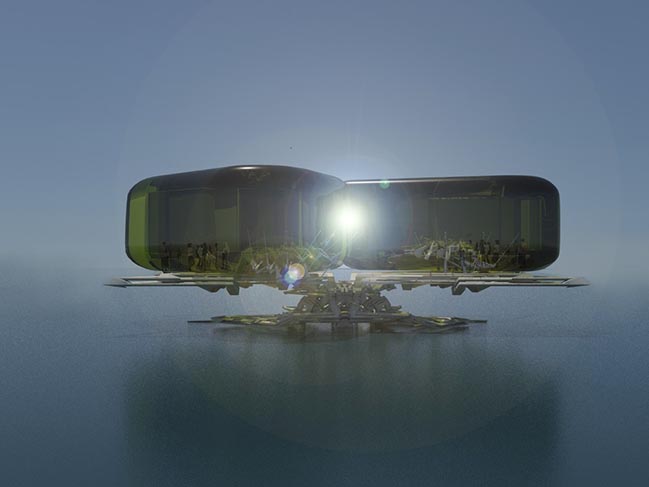 The lighthouse hotel's current location is off the coast of mainland South Korea near the island of Jeju, The site is accessible by boat through waters between 1500 ‒ 7000 ft deep. South Korea has a large number of offshore wind turbine farms, and since 2006 has invested in producing large-sized wind turbines and oil rigs in their shipbuilding yards. Industrial and shipbuilding contractors have been fabricating the wind turbines, and Ms Krasojević believes that the shipbuilding industry along with marine engineering can inspire building processes that focus on harnessing renewable energy to perform efficiently in difficult environments like the open sea, whilst protecting the environment. The lighthouse hotel reappropriates an existing oil rig, using the tension leg platform for structural support onto which the hotel is designed. 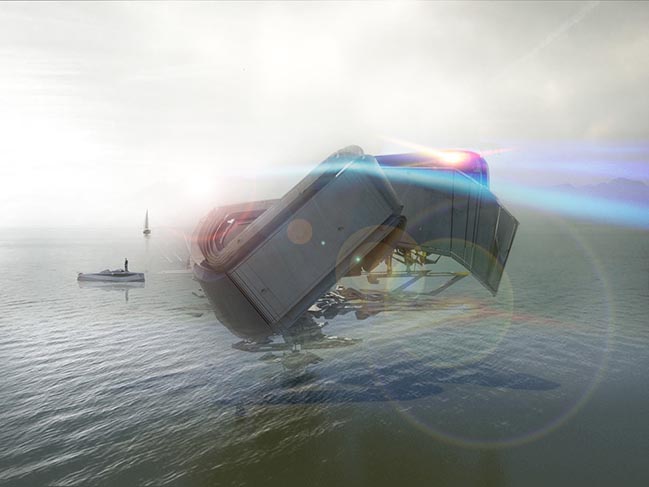 The lighthouse hotel design is made up of three building elements that contain the hotel's living, lobby and social areas. Layered aluminium surface elevations, which are wrapped around the hotel' s building elements and suspended from the pivoting primary structure, enclose flip-wing turbines to produce electrical energy when they are lowered into the sea. Seawater crashes into the aluminium panels, flipping over the hydropower turbines that are caught like barnacles between the layers of aluminium clad surfaces. The flowing turbines flex as water flows over them, similar to an oscillating wave surge converter. The flip wings are connected to the elevations which will securely hold the turbine, allowing the fins to oscillate backwards and forwards for greater effect. 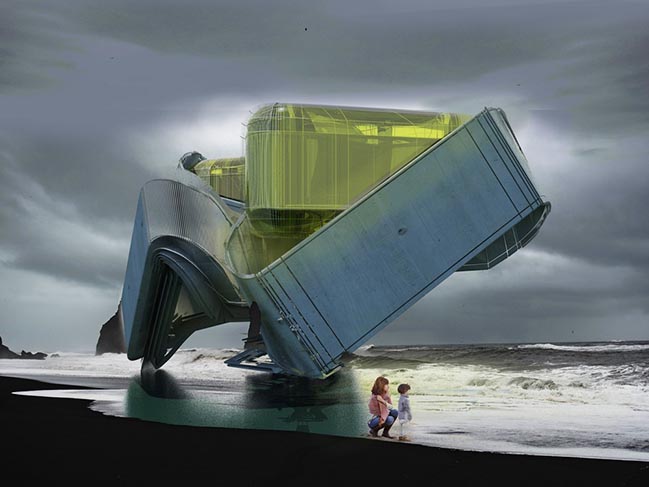 The turbine elevation movements are choreographed by the pivot wheel hydraulic frame section. This pivot wheel is bolted to the primary structure to reduce fatigue stress caused by changing loads due to movement and load redistribution. The pivot wheel moves and tilts, lowering and revolving the elevations according to wind and wave direction for optimum generated energy. 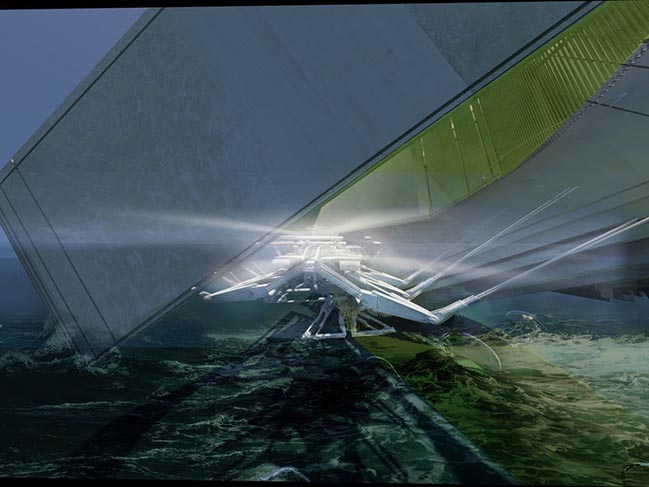 Lifting the turbine elevations out of the water minimises saltwater corrosion; all the materials used are easy to procure and replace, while the cladding comes in a modular format, making it easier to repair. The turbines lie flat against the elevation when inactive. They are robust, easier to position vertically and cheap in comparison to propeller turbines, although not as efficient, which is why they are layered in this scheme. Sacrificial anodes are scattered throughout the structure so as to negate corrosion; as Zinc has higher negative electrochemical potential than steel, the anodes protect the primary structure from marine biofouling. 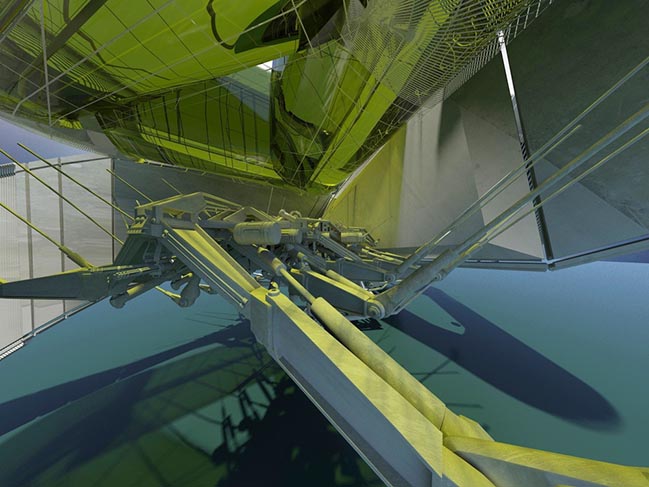 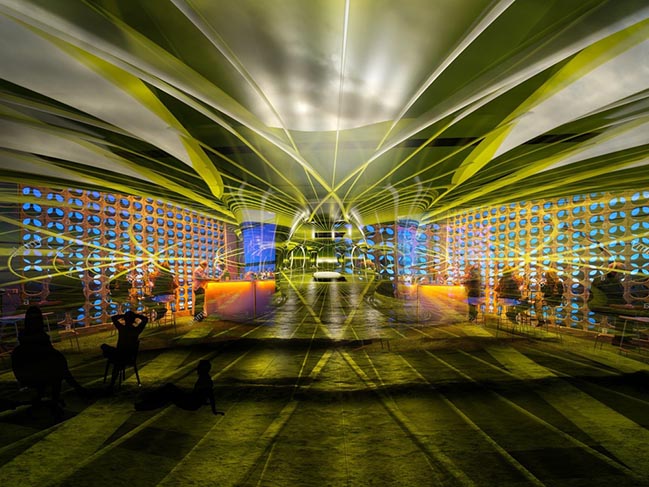 The lighthouse hotel sits on a tension leg platform which works in the same way as a taut, moored buoy. The tethered buoyant structure is a large, semi-submersible floating vessel, which uses a heavy gravity vacuum anchor that fastens it to the seabed. The tension force is maintained in these vertical cables by adjusting the buoyancy of the floating platform, ensuring positive tension at all times. This method reduces marine response in the platform to effectively zero in vertical terms and very little horizontally. Horizontal drift can be further reduced as required. Using buoyancy against a tension mooring system allows the use of a semi-submersible floating platform, which can carry an additional load that it balances out by increasing buoyancy. 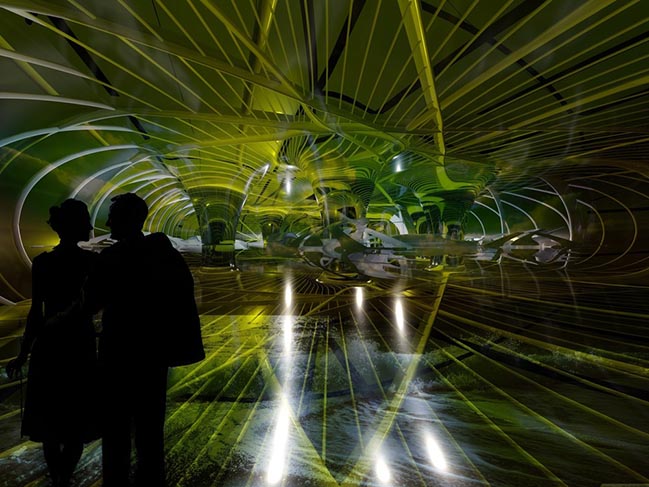 The hotel is fabricated from a series of partly inflated, moulded ETFE membrane sections. Lightweight yet durable, these airlock sections split apart and float in the event of a rogue wave or an emergency. The lantern room, located at the top of the hotel, is revealed when the elevations lower during storms. The Fresnel glass lantern light projects out over the entire area, creating an illuminated glass canopy lobby. The refracted light intensifies as it beams through and out into its surroundings, blurring the edges between interior and exterior space. 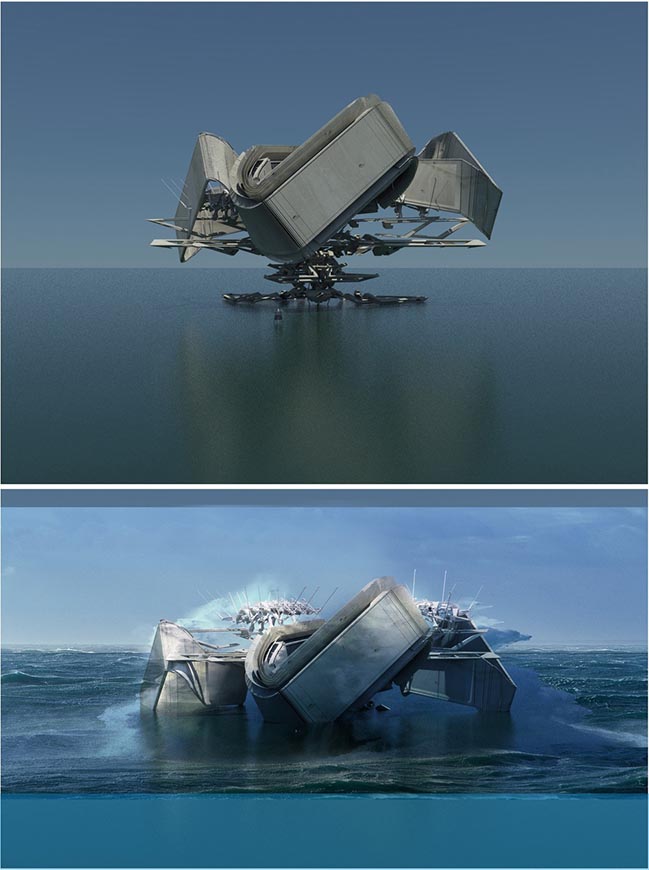 The original design envisaged storing water within the elevations as potential energy; the elevations are in effect the hydroelectric station. However, the weight of the water-filled elevations would place too much stress on the structure which would need to be maintained regularly, increasing the cost of running the hotel. Pockets within the elevation would fill with sea water and store it until this potential kinetic energy is needed to generate electricity, acting in a manner similar to high and low reservoir dams. The elevations release the stored sea water back through the embedded turbines. During a storm, seawater stored within the elevations braces the lighthouse against wind and water forces. 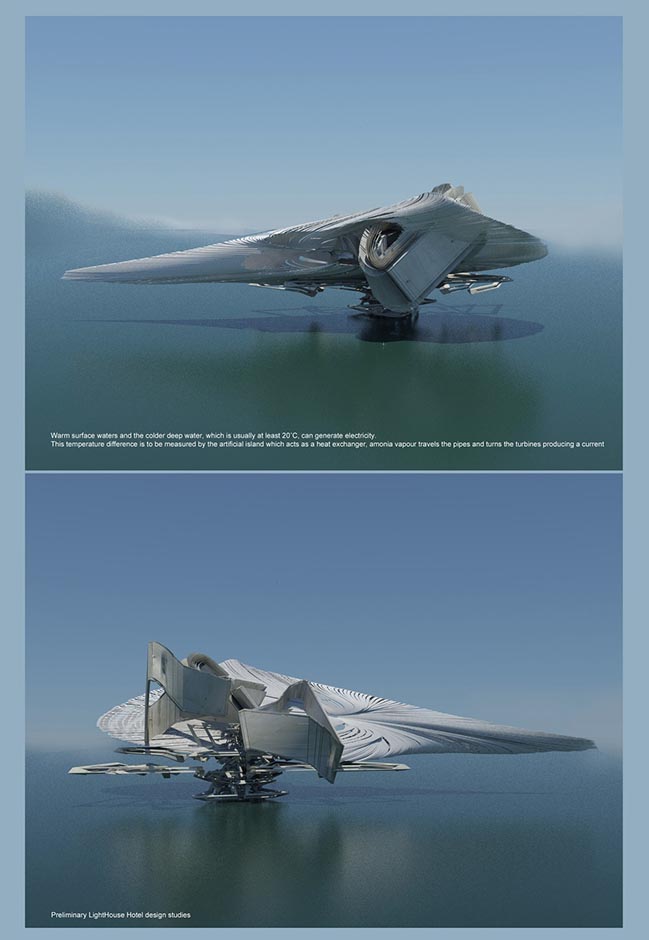 A primary concern with this design approach is the different heights of the water reservoirs, which requires water to be pumped into the elevated reservoirs during periods of low demand, to be released for generation when demand is high or system generation is low, thus reducing the overall process efficiency because of this energy consumption; whereas the most significant factor that determines new technology is whether it effectively addresses the energy production output vs the energy input for a sufficient amount of energy produced. As with all technological applications, these designs need to be tested in order to recalibrate them to be a more energy efficient and comprehensible presence in design. 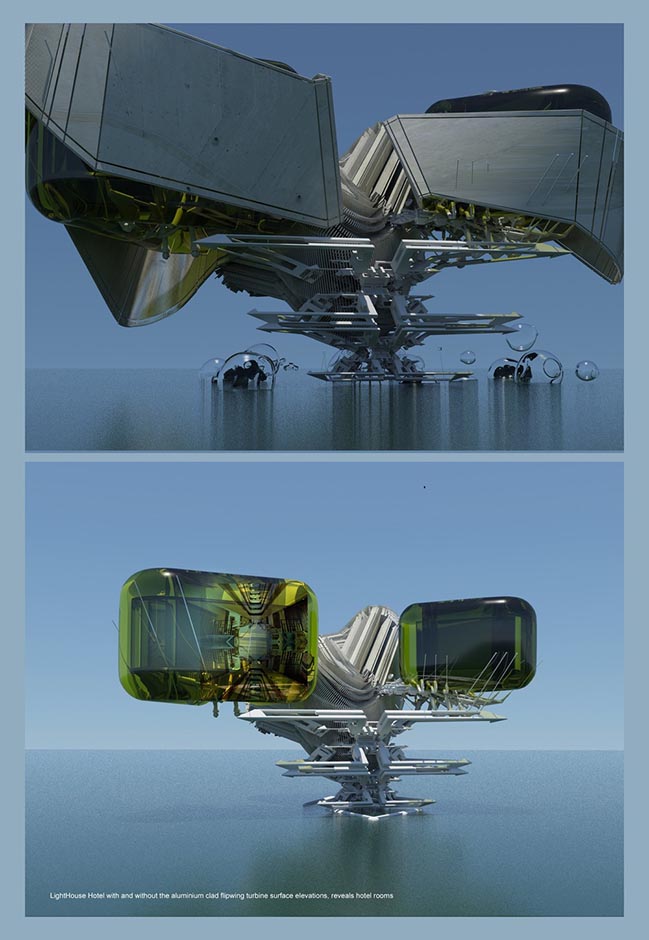 Caisson foundations and gravity anchors secure the tension leg platform so that there is no vertical movement, the only horizontal displacement which is kept to a minimum. The platform is held in place by steel tension cables embedded into the ocean floor using a gravity anchor. Oil rig construction has inspired the overall structural design of the lighthouse. During storms, the suspended elevations are lowered just enough, so that the light emitted by the beacon projects over the sea elevations. An increasing number of lighthouses are being decommissioned because of technological and functional obsolescence, whereas the remaining lighthouses come into play in case of GPS or electronic navigational failures. 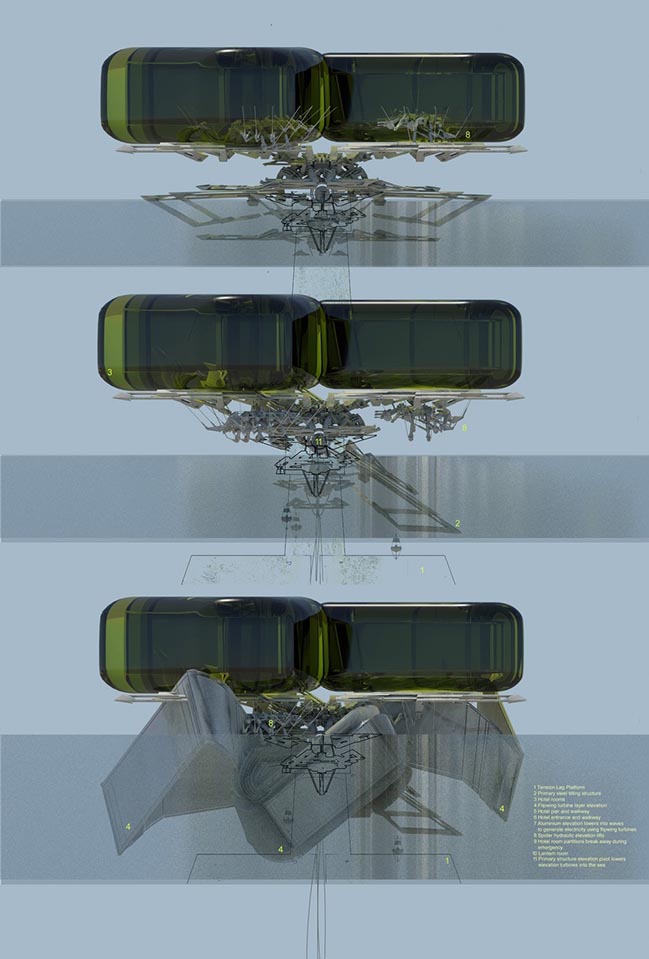 A hotel has to regenerate its identity to keep up with changing trends and customer demands. Such potential obsolescence exists in technology as it does in finance, from the use of Bitcoins, smart materials and biodiversity to space travel hospitality. We are increasingly becoming a society reliant on social platform reimbursements and precedents, as we strive to be accepted, relevant and informed, because of which we are more readily influenced to experiment with new choices. More and more "experts" dictate our peripheral understanding of sustainability, and there are many we could listen to. The truth, however, is that we are constantly being exposed to improvements to our current persuasions, whether in travel or recycling. Given increasing environmental awareness or the wide range of experiences and themes available when choosing vacations, we can now experiment and become adventurers and explorers. 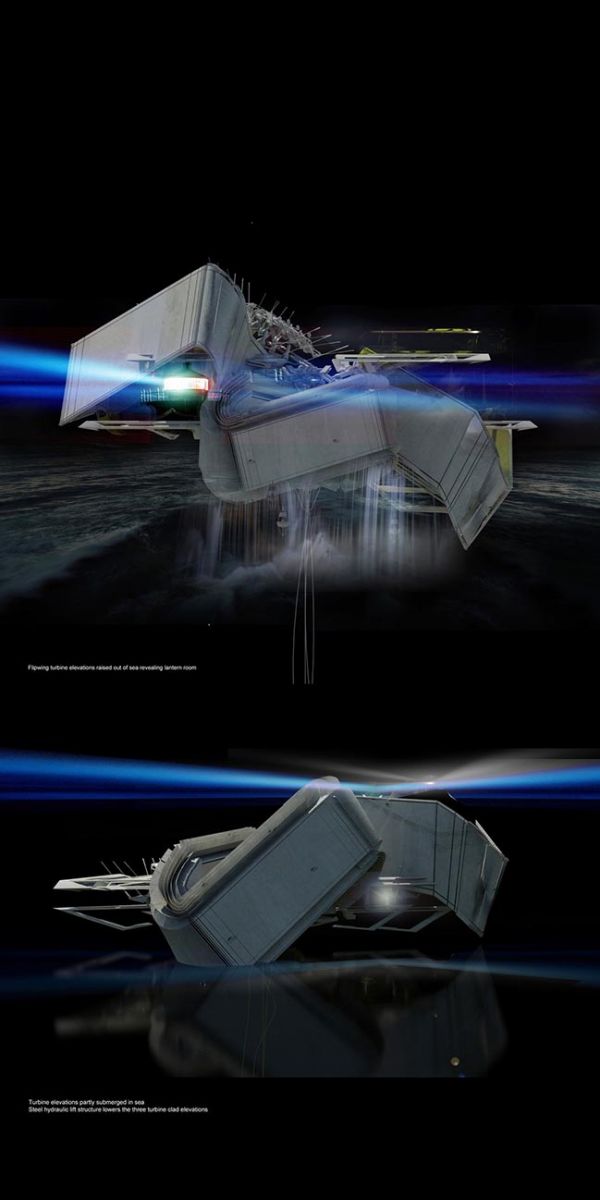 Inevitably, the hotel industry needs to keep up. This is more so because hotels are temporal, needing to reinvent themselves and the tourism and hospitality experience in order to avoid becoming typologically redundant. Ms Krasojević believes a cross-programmatic approach will ensure that sustainability and renewable energy remain at the forefront of design criteria and programs. Hotels frequently innovate, and they can accommodate experimental design approaches catering to individuals who want to experience a unique getaway. The lighthouse hotel offers volunteer opportunities for guests to engage with biodiversity and renewable energy. Enabling travellers to challenge themselves and to engage with conservation efforts, positively contributing to protecting ecosystems, will be a transformational travel experience. This could mean anything from offering an off-the-grid meditation retreat to facilitating volunteer work with non-profit organisations. 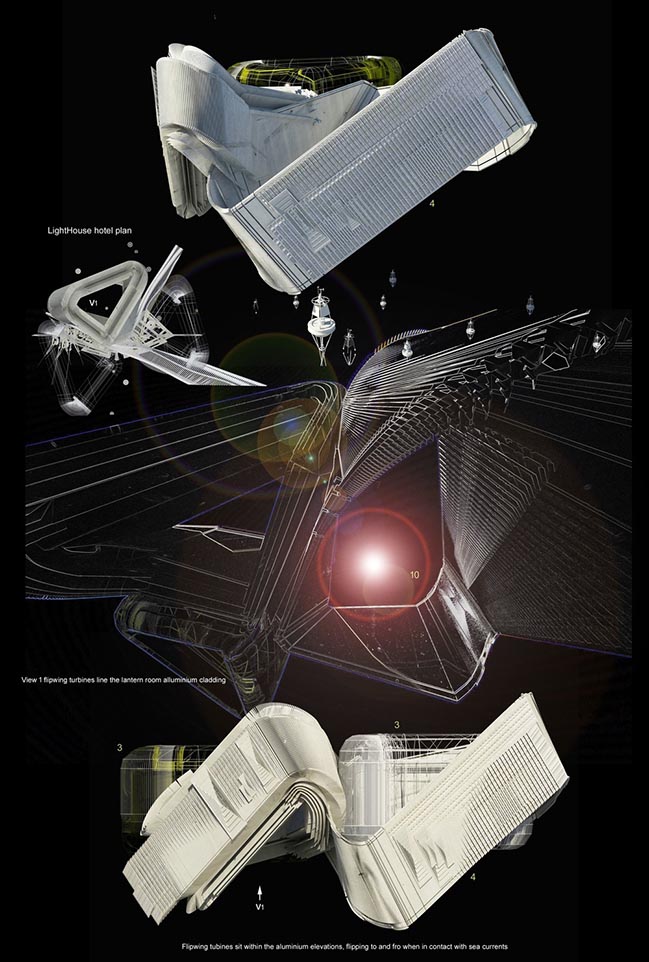 Ocean and seawater designs should embrace renewable energy. The oceans are vast areas of seawater which warm up and retain solar energy; 70% of the earth's surface is covered by water, which captures sunlight that can be transformed into useable electrical energy. The only problem is, the difference between the depth temperatures, from cool to warm water, involves using a lot of energy to extract the ocean’s thermal energy. Using ammonia which has a lower boiling point will lower the energy needed for the extraction process, but is it still beneficial? 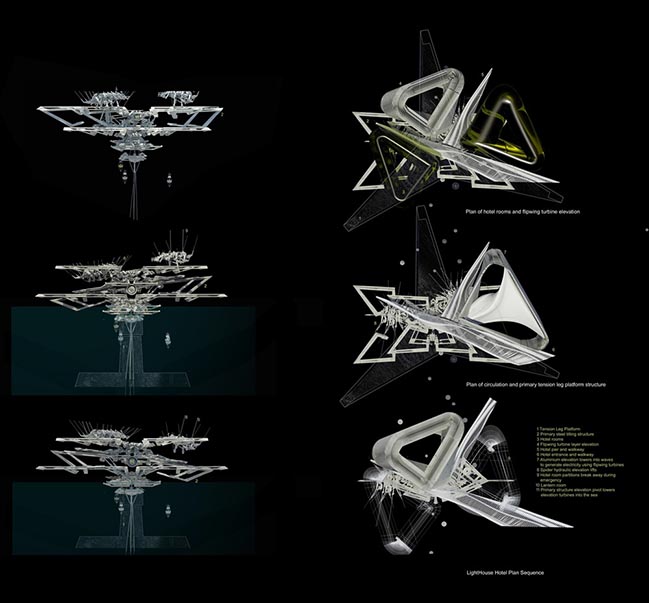 Not enough research has been done to find the most efficient manner to extract ocean thermal energy. Both warm and cold seawater is pumped into heat exchangers that separate the different fluids. Ammonia, which has a low boiling point of room temperature, is fed into one heat exchanger. The warm seawater in an adjacent heat exchanger boils the ammonia to create vapour. The pressurised vapour goes through a pipe to run a turbine connected to a generator that produces electricity. After the ammonia vapour leaves the turbine, it descends through a pipe into a chamber surrounded by tubes of cold seawater. The ammonia vapour is cooled and becomes a liquid again, thus continuing the cycle; not the most efficient of processes, but a beginning, certainly. 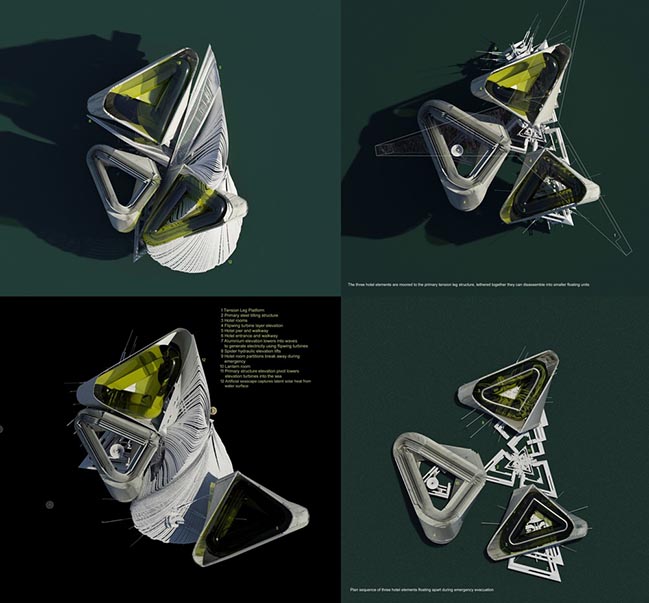 Ms Krasojević believes we should integrate renewable energy as a part of the design process by defining symbiotic relationships between typologies; for example, hotels with power plants that can generate enough energy to sustain the building, and discarding redundant typologies in order to redefine new ones, as a cross-programmatic, cross-disciplinary effort. One of the most important issues to keep in mind is ensuring that the implementation of technologies dealing with renewable energy, conservation and sustainability does not negatively affect the ecosystems which we are tapping into. This is why, she believes, we need to combine functions in order to produce energy; a power plant that enhances and embraces the ecosystem rather than exploits it to generate energy regardless of repercussions. 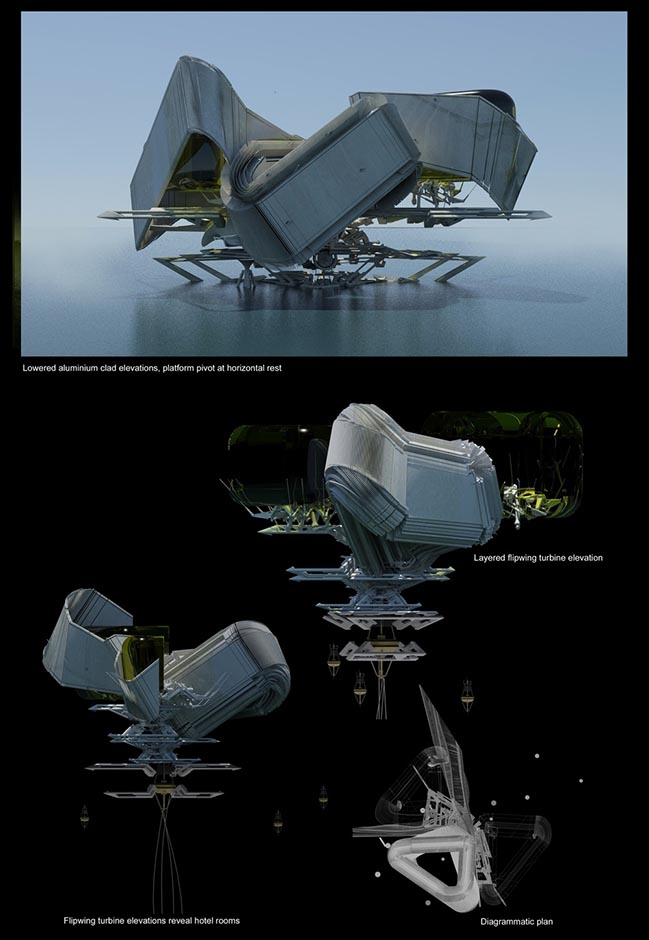 Off-coast constructions alter their immediate environment by leaking structural maintenance pollutants into the sea. The moving parts of devices can harm resident or migratory wildlife, even static installations can alter breeding and feeding behaviour through animals having to avoid the devices. Ecosystems can also be affected by altering or removing energy from the physical environment, and devices can change water flow, which may affect water quality, wave height, the delivery of nutrients and the natural transport of sediment that ensures coastal protection. These impacts could eventually disrupt food webs and the stability of the ecosystem. 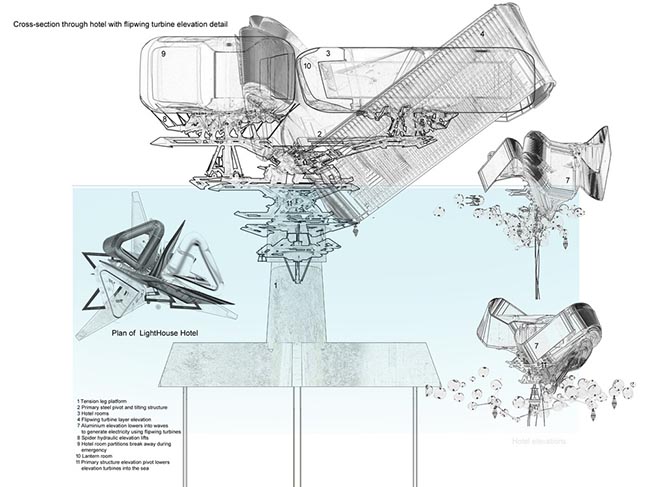 To conclude, we still face the delicate balance between artificial and manmade—when to claim, be subservient, alter or even pause—in order to harness renewable energy whilst protecting the natural character of the environment. We can afford to be a little tougher with the changing climate, even as change is happening and in an aggressive manner; the trick is knowing when and how much to intervene. Even with renewable energy production, the methods often negatively contribute to both environmental and financial costs rather than reducing operational costs whilst increasing efficiency. This should not discourage us, though.  The way forward is to research more and redefine obsolete building typologies by creating new ones or recycling the old. 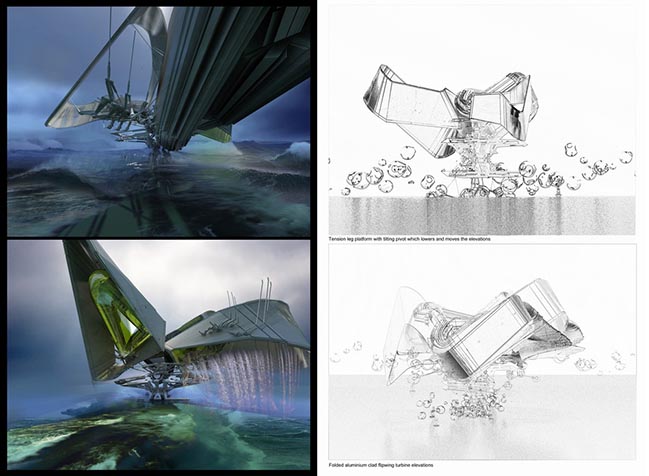 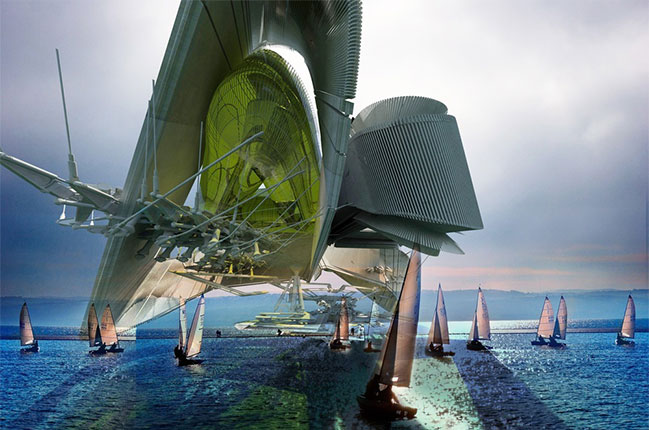