MIRABILIA by PLUS ULTRA studio

A surprising series of minimal narratives comes to life inside the Villa Imperiale in Pesaro, Italy thanks to the project MIRABILIA. Domestic settings between ancient and contemporary by PLUS ULTRA, architecture and interior design studio that, through the skilful use of iconic pieces, found objects and other items created by emerging designers, proposes domestic scenarios capable of transforming rooms and courtyards of the villa into unexpected stages waiting for new actors. 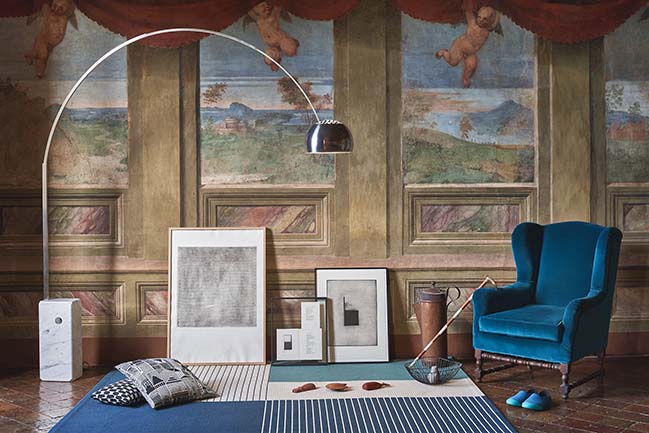 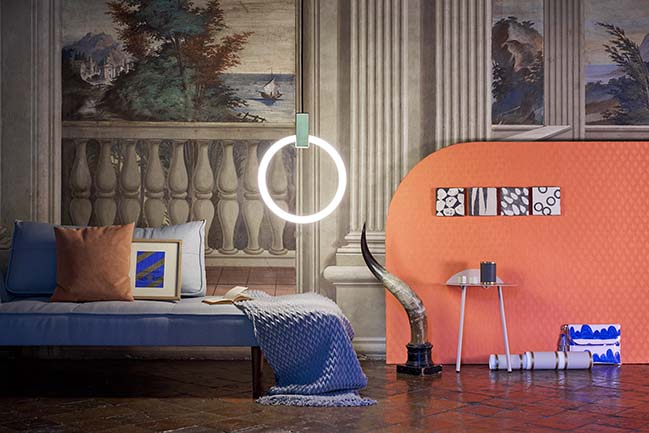 From the architect: MIRABILIA is an interior design project and site-specific setup conceived through the observation of a place that preserve numerous traces of the past and that carries out its domestic charm still today: the Villa Imperiale in Pesaro, Italy. 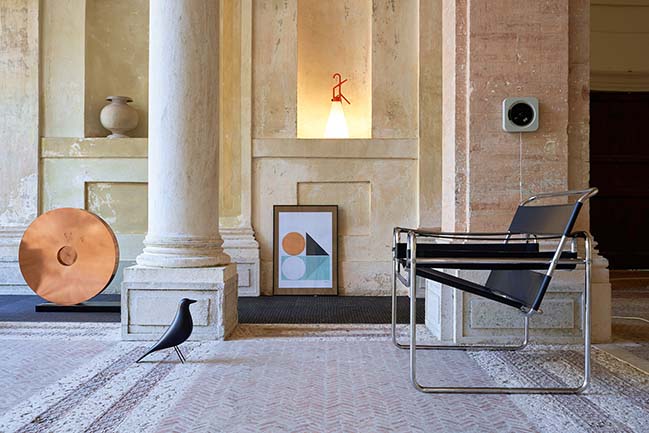 The project is the result of many thoughts: on the one hand, the experience of a place that over time - from 1400 till today - has welcomed different ways of “dwelling” and with them different typologies of domestic objects; on the other hand, the wish to explore the relationships between different objects, and the relationship these objects establish with the space where they are placed. 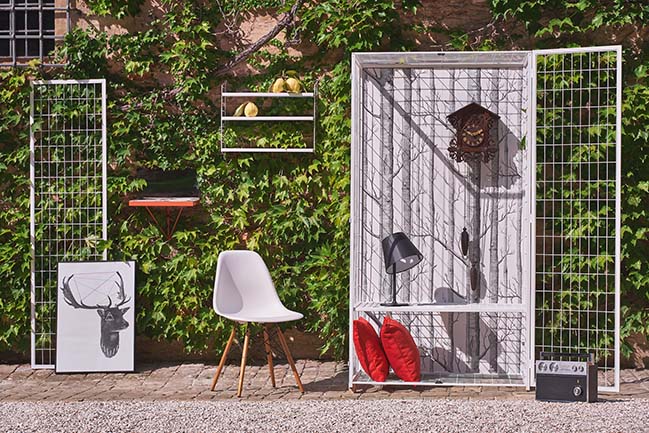 Today many of the rooms of the Villa Imperiale in Pesaro are open for visits but they looked devoid of their original dwelling function, in favour of greater usability by visitors; however, over the centuries, these spaces have witnessed different ways of living and have been furnished with many objects and accessories to recreate each time a different “balance”. 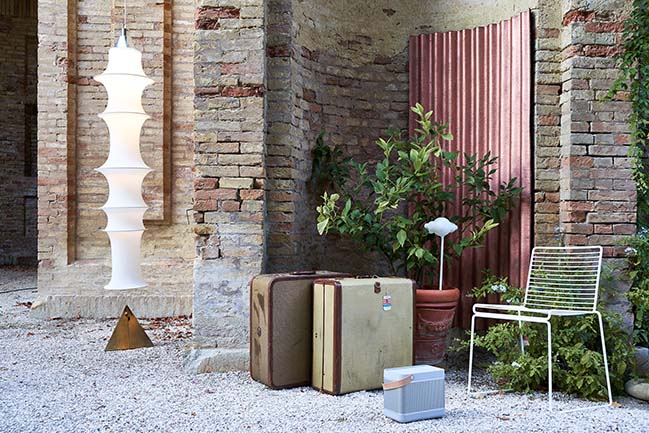 What. MIRABILIA is an interior design project consisting in a series of domestic setups built with objects of different ages and nature: from iconic pieces of design, to objects by emerging designers to domestic objects of the past recovered from dusty warehouses. The places were chosen for their strong evocative power and for their different character. The historical manor presents a wide variety of spaces: from completely frescoed rooms, to apartments with stylized geometric decorations, to porticos, loggias and courtyards conceived as actual “open-air interiors”  to be lived in during the summer months. 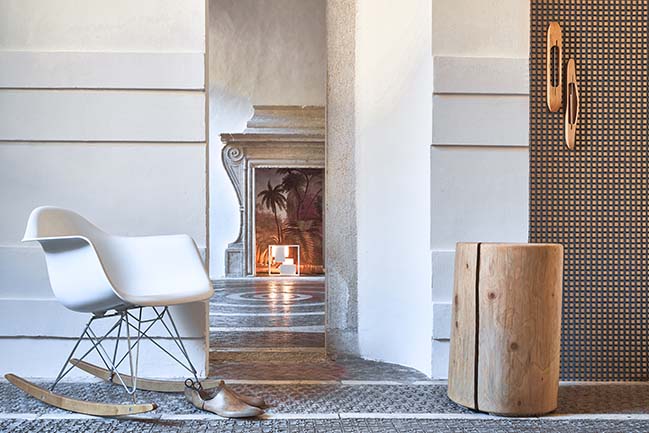 The selection of the different settings witnesses this diversity. Some of the setups are assembled in completely frescoed rooms, where the walls seem to be replaced by illusory architectures that allude to “another” reality through the use of perspective. Other setups are built playing with the many sculptural elements of different nature that characterise the villa: niches, columns, pilaster strips, and other decorative elements arranged on different planes, like real scenes in three dimensions. Others, finally, see the inclusion of natural elements - real or painted - that interact in every single part with the architecture of the villa, according to a delicate balance designed by the architect Girolamo Genga.

The result consists in 10 setups: real “rooms”, scenes of domestic life captured as if they had been suspended between different eras. 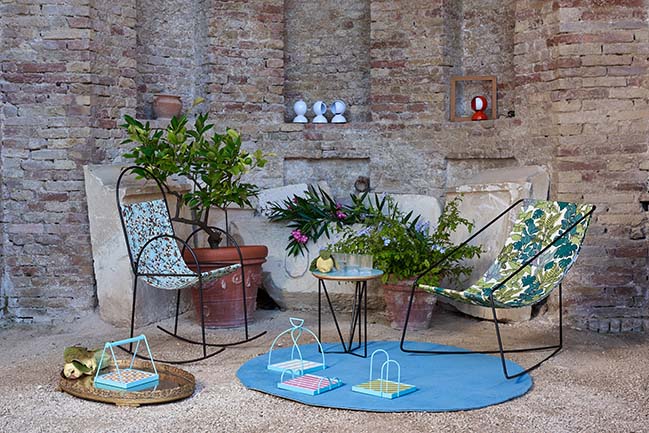 How. Each setting is characterized by some recurring elements. A seating element that embodies the ideal of rest, shelter and domesticity: the domestic space is where we stay, sheltered from the outside world and we relax at the end of a day. The seating is therefore the basic element though which the person becomes the new fulcrum of the environment, his new point of view. Hence some variants with two or more seatings, arranged vis-à-vis, represent the possibility of creating a space for conversation.

Along with the seating, in every room there is a light source: the radius of our actions has always been determined by the presence of light, from the time when the action took place within the dim halo of candles or oil lamps, to the spread of electricity, to the present day. 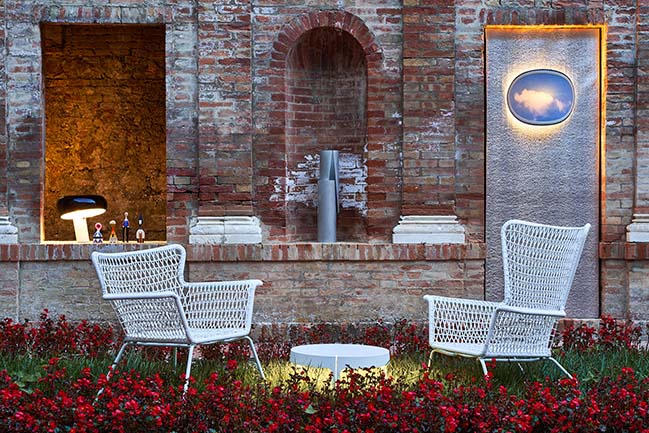 Each setting is completed by other objects chosen according to their age: one or more pieces retrieved from forgotten warehouses and old wardrobes maintain a strong link with the past and are traces of previous lifestyles that followed one another in the Villa. These are both valuable objects that witness certain types of passed workmanship making them today rare artifacts (such as the walking stick in ivory and bois de rose), or everyday objects that remind us of obsolete functions (such as the large copper pitcher that was placed in the fireplaces to have hot sanitary water).

In addition to objects from the past, an iconic design piece is placed in every setup: they are often objects conceived to improve everyday life or created for largescale distribution that over time have become iconic. They are objects destined to be consecrated as “eternal” and to cross the historical eras to come, leaving their mark. Finally, there is always an object designed by a young emerging talent, who is establishing on the market or is still looking for a producing company - a tangible trace of the most immediate present. 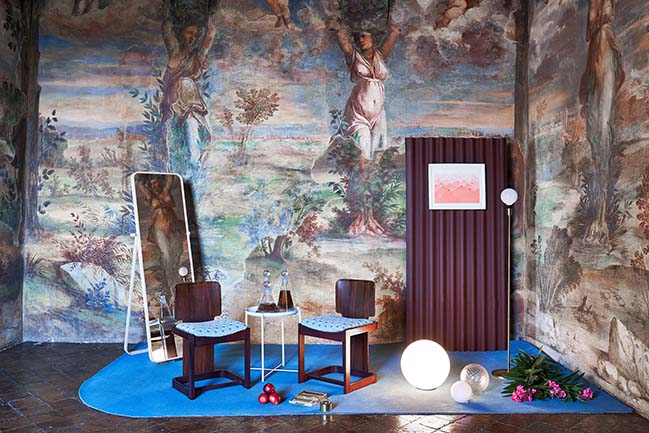 Why. MIRABILIA gives us the opportunity to reflect deeply on our work and at the same time on our everyday life. We spend most of our life inside buildings: offices, public buildings, private and domestic spaces; that’s why we wondered: “What is a good interior for us?”

A good interior should frame the life of people who inhabit its space. We prefer to build atmospheric designs, what the Germans call Stimmung: in our projects we try to talk about moods and memories. Fundamental concepts in our working method are: balance, character, atmosphere, time. The result is a design exercise in which the practice of contamination, conceived as an added value, offers a new meaning to the concepts of identity and difference. 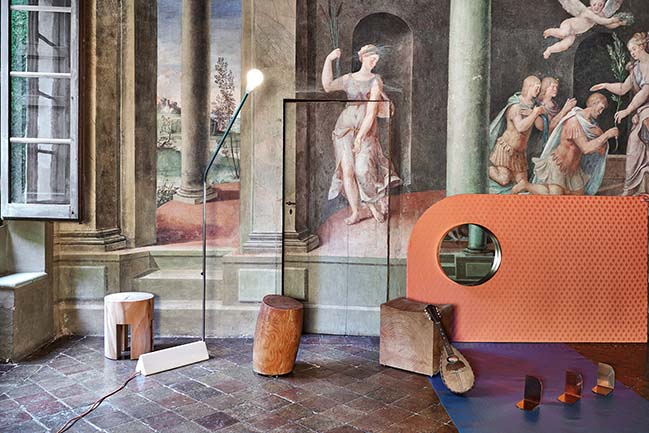 90% of our works deal with the existing: this entails working with opposite tensions and balance, combining low-cost designs with the permanence of handcraft, the simple with the richly decorated, the generically international with the specific qualities of the place. During the last decade some taboos have dwindled while the appeal of breaking rules and the joy of creating contradictions and of choosing a naive approach have been inversely proportional. We prefer heterogeneous spaces, combining objects from different periods and styles and working with opposite tensions and delicate balance.

MIRABILIA is conceived as a regular appointment, aimed at reviving the domestic spaces of existing buildings but at the same time to continue the research and construction of different setups, each year in different ways and according to various topics. 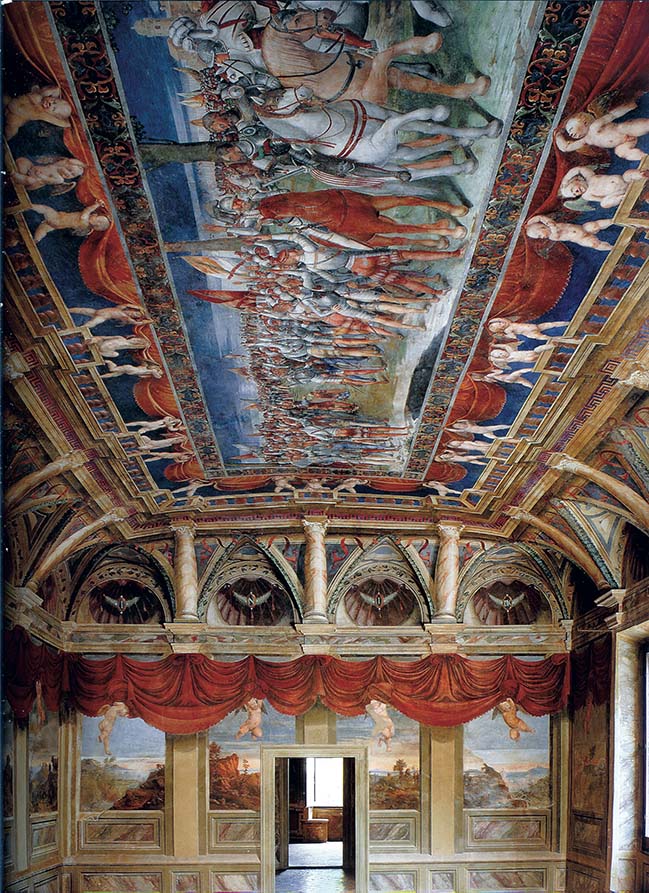 Who. The project is conceived by Alessandra Castelbarco Albani, architect and interior designer, and is curated by the team at PLUS ULTRA, studio that Alessandra cofounded with Marco Di Nallo.

Where. The Villa Imperiale is located a few kilometers from Pesaro, in the Marche region in Italy, surrounded by the green hills of the Colle San Bartolo Natural Park, that preserves the original relationship between the Villa and the landscape. The Villa, originally conceived in the 15th century as a Sforza manor, was enlarged and frescoed in the 16th century by the will of the Della Rovere dukes. 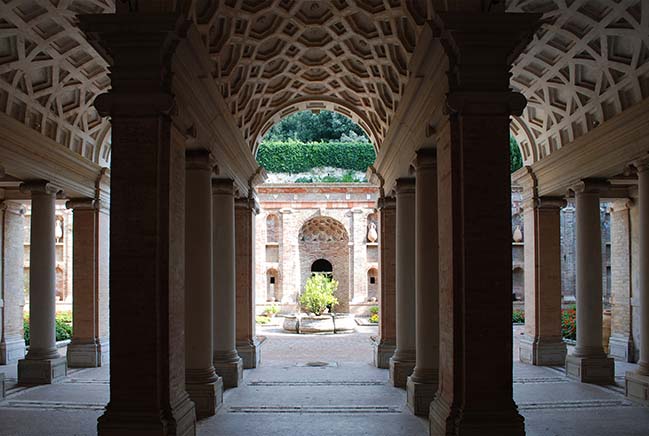 The Villa Imperiale looks still today as the perfect image of an ancient suburban villa where landscape and architecture find their right balance. The complex consists of two very different buildings, linked by a hanging corridor: the fifteenth-century villa of the Sforza, former lords of Pesaro, and the sixteenth-century wing designed by the architect Girolamo Genga for the Della Rovere dukes. As declaimed by the inscription composed by Bembo and posted on the sixteenth-century facade, the Villa Imperiale in Pesaro was conceived by the duchess Leonora as a gift to the duke Francesco Maria I, who would have found there rest and leisure after the hardships suffered at war. 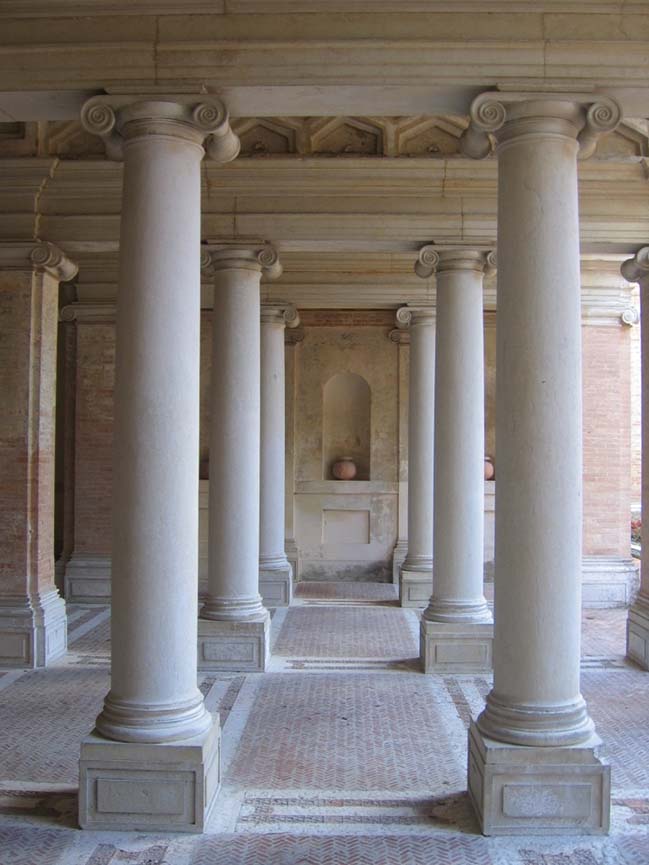 The new wing, nestled on the hill and organised by a system of terraces, is characterised by a predominance of open spaces: loggias, gardens and courtyards, all designed for the leisure of the dukes and their guests. Gardens and architecture are two inseparable elements in the Villa Imperiale: the former, like the masonry architecture, are characterised by a gradual sequence of spaces and by a continuous discovery of them; a sort of promenade architecturale that culminates on the top terrace. Here one can admire the natural landscape towards the valley, being at the same time immersed in the wild nature of the woods that surround the villa. In 2012 and 2017, the Villa Imperiale and its gardens were awarded among the ten most beautiful parks in Italy.

YOU MAY ALSO LIKE: CCP - Custom furniture for a living room by PLUS ULTRA studio 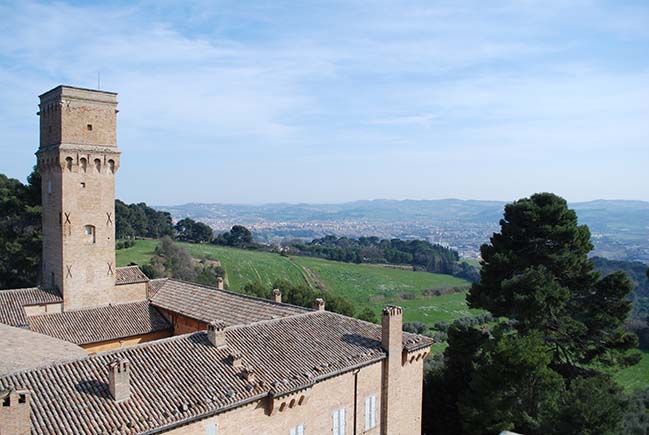 MIRABILIA by PLUS ULTRA studio

04 / 27 / 2019 A surprising series of minimal narratives comes to life inside the Villa Imperiale in Pesaro thanks to the project MIRABILIA. Domestic settings between ancient and contemporary by PLUS ULTRA