Celebrations in Sharjah – this year's UNESCO World Book Capital – kicked-off with the unveiling of The Scroll, a new piece of public art by British sculptor Gerry Judah. 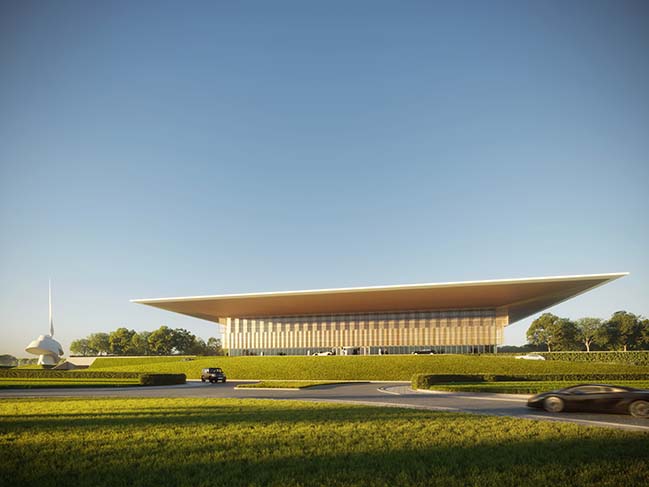 From the architect: The opening event also revealed designs for the new House of Wisdom – an iconic library and cultural centre that seeks to be the catalyst for a new cultural quarter in the city. Both projects are being developed by Sharjah Investment and Development Authority (Shurooq). 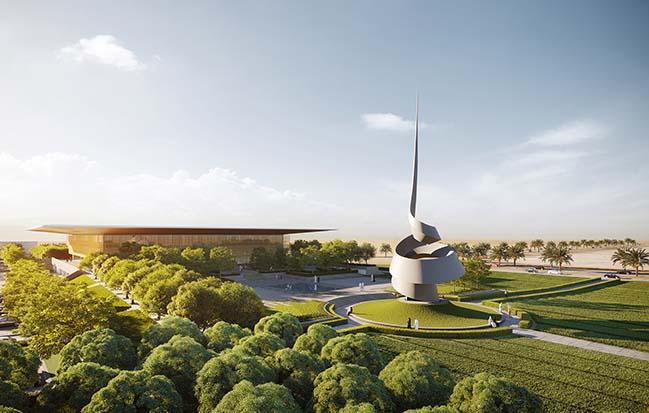 Gerard Evenden, Head of Studio, Foster + Partners said: “Long considered primarily as repositories for books and periodicals, the role of libraries in the life of contemporary communities is set to be reimagined for the 21st century. The House of Wisdom conceptualises the library as a social hub for learning, supported by innovation and technology.” 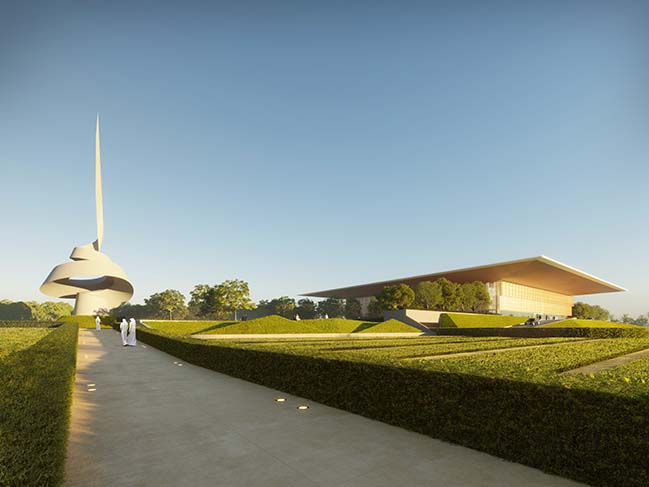 Located on the Sharjah International Airport Road, ten kilometres from the city centre, the two-storey building embodies a sense of clarity and lightness, with a large floating roof cantilevering on all sides of a transparent rectilinear volume. The 15-metre-wide overhang shades the façades throughout most of the day, while aluminium screens with differing densities filter the low sun in the evenings. The movable screens are deployed only during the late afternoon, when the sun is at its lowest, preserving the visual connections with the landscaped gardens. 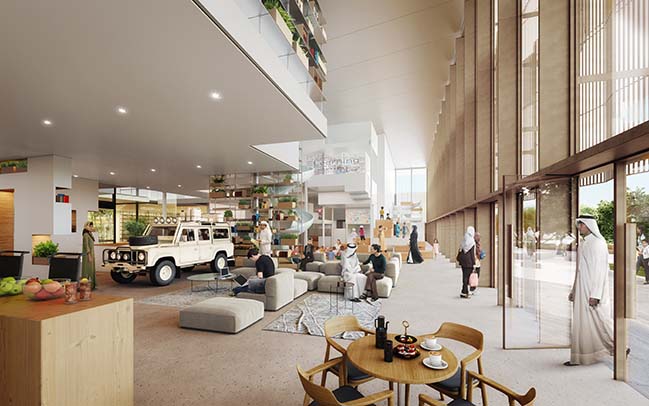 Visitors enter the building from its western edge into a double-height reception hub with a central courtyard that brings light to the interior spaces. This densely planted green area creates a comfortable outdoor environment for social events or quiet contemplation, evoking the layered canopies cultivated. The ground floor contains large spaces for exhibitions, a café alongside a children’s educational space, and the archive and a reading area with facilities such as a book espresso machine that prints and binds books on-demand. 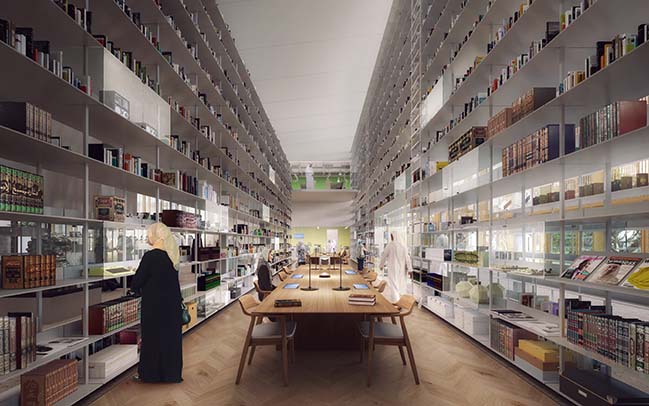 The floating roof is supported by four cores that also contain all the back-of-house and service spaces, creating a large column-free floorplate. The two cores closest to the entrance contain large sculptural staircases that guide people up to the mezzanine floor. The upper floor hosts a series of pod spaces suspended above the central courtyard, which offer both quiet and collaborative spaces, exhibition areas and reading lounges including a prayer room and a women-only area. Throughout the building, there is an emphasis on establishing and retaining a connection with the outside, looking onto the gardens surrounding the building. 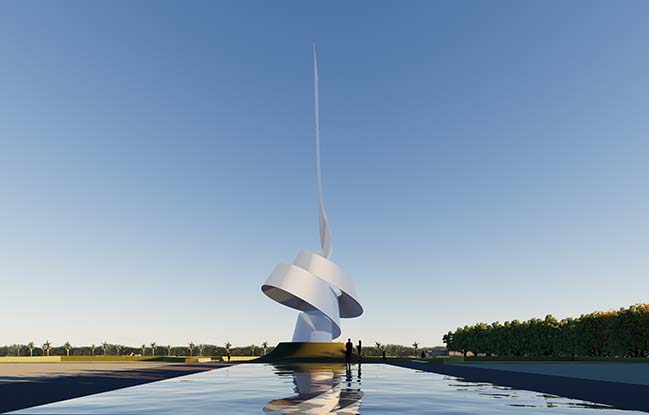 The landscape is divided into two sections – a knowledge garden and children’s playground to the south, which has several native species and a water feature, alongside a more formal, geometrically arranged garden to the north containing The Scroll – a contemporary interpretation of the ancient Arabic scrolls as a single, spiralling sculpture that loops towards the sky. 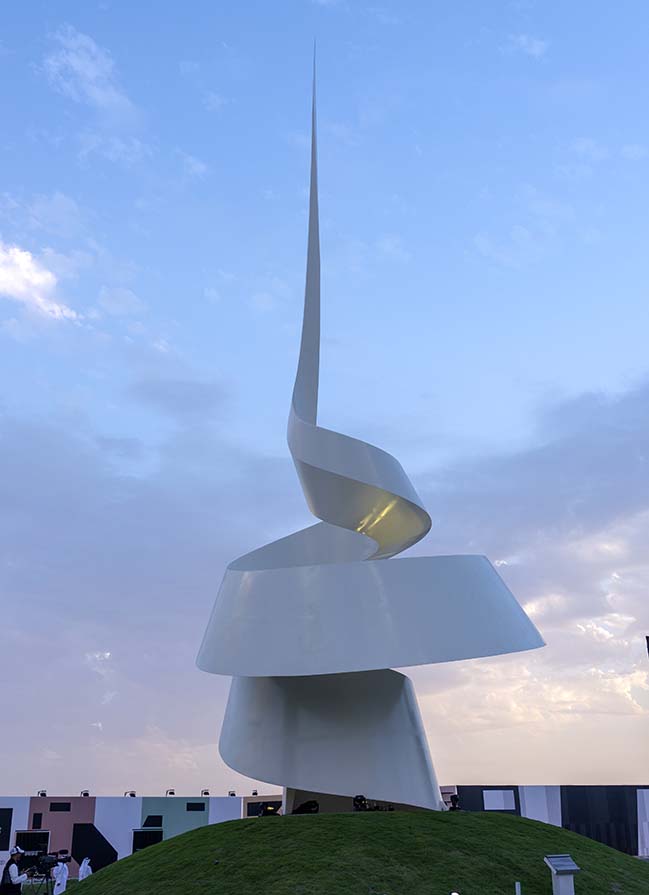 Using a form of geometry called ‘developable surface’, the curved shell was created from rolled steel plates, cut by lasers guided by computer control, welded together and painted with multiple layers to protect the steel from sandstorms and weather erosion.

“Gerry’s sculpture is a perfect complement to the minimalist geometry of our building. We look forward to the building’s completion, which will give the local communities and scholars a new space for shared learning and innovative research, set within a beautiful landscape,” added Evenden.

04 / 25 / 2019 Celebrations in Sharjah – this year's UNESCO World Book Capital – kicked-off with the unveiling of The Scroll, a new piece of public art by British sculptor Gerry Judah 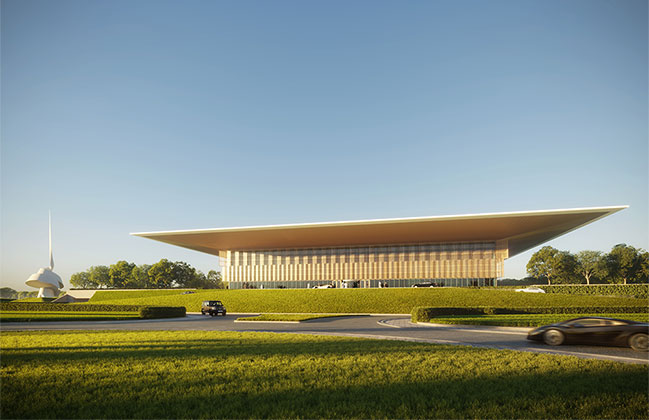