For five months, nonLin/Lin is on display for the first time at the Grootseminarie in Bruges for the city’s second Art and Architecture Triennial. The installation is the centerpiece of an exhibition of other architectural works from the FRAC Collection that have evolved out of the computational turn. Liquid Architectures, curated by Abdelkader Damani, asserts the Triennale theme of Liquid City with lively, fluid-like forms that upend the notion of architecture as rigidly determined and immutable. 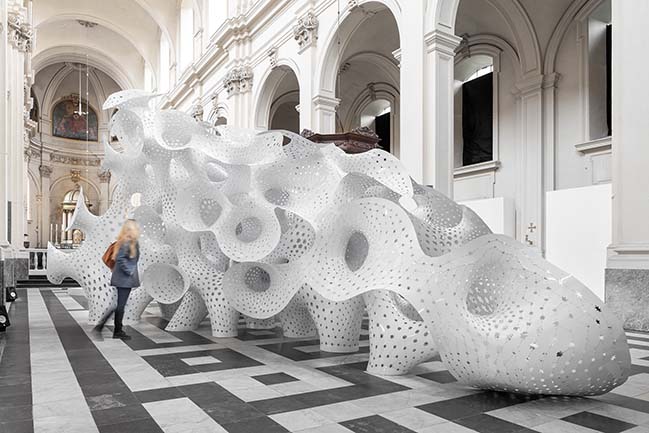 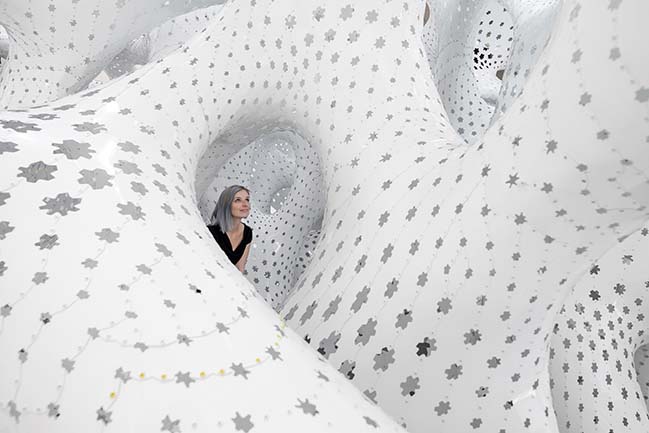 nonLin/Lin was an invited commission by the FRAC Centre to create a new environment that merges digital and analog modes of experience. Produced in 2011, it represents an early prototypical work in Mesh Segmentation and Structural Stripes that has been further refined into large scale constructs and architectural environments over the past years. While this stands as an early proof of concept for our custom computational protocols of descriptive geometry, the environment is impressively thin and light. Each module is made from 1mm thick aluminum stripes, and yet our team was able to crawl on the structure during its assembly. 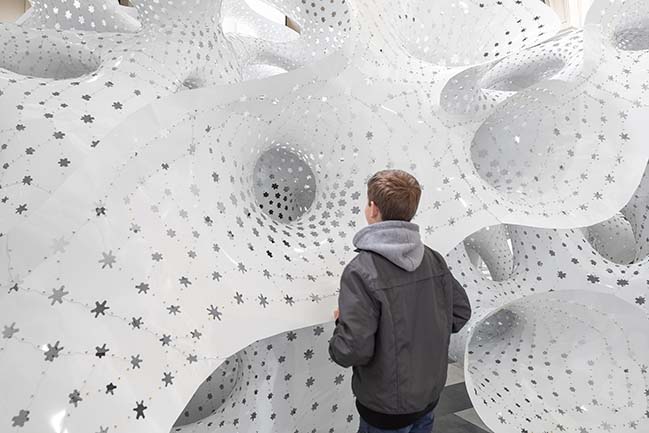 For the summer, nonLin/Lin will occupy the nave of Bruges’ Grootseminarie, a 17th century Cistercian Abbey. Forming a Y in plan—an initial split—the piece twists and unfurls along the main axis of the sanctuary. The sanctuary context is well suited to the mystical quality of the installation. Upon approach, you can’t quite determine the structure’s depth; you must wander through its thicket of porous branches to understand its scale and depth. Openings between connecting parts filter the light that spills through the clerestory above, alternately projecting shadow and dappled light onto its interior. This intricate experience has the sense of floating through a dreamy coral-like structure, and the derive takes over any sense of recognition of its individual elements. 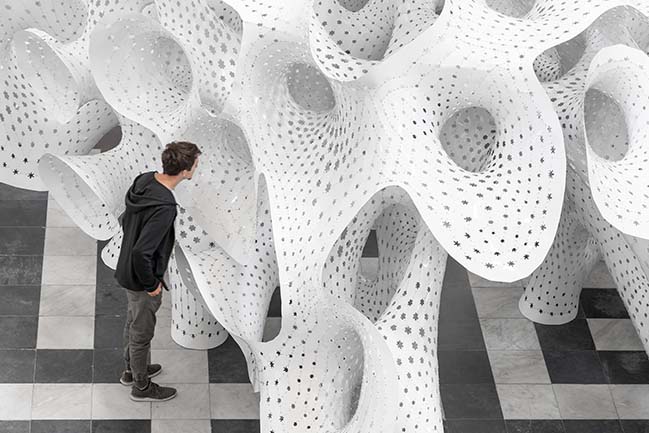 Sprawling and winding forms within the spatial environment are unified by a continuous surface of glossy white aluminum, made up of 6,367 non-linear stripes. The morphology takes on its multi-directional elements with protocols of recombination, where members within the structural network split, merge, open into apertures, or stretch into tubular limbs. From several thousand individual parts, 570 components are pre-assembled in 40 modular sections. The four metre-high structure can be taken apart and reassembled in different locations, realizing a lightness beyond its material quality and into a paradigm of agile architectural production. 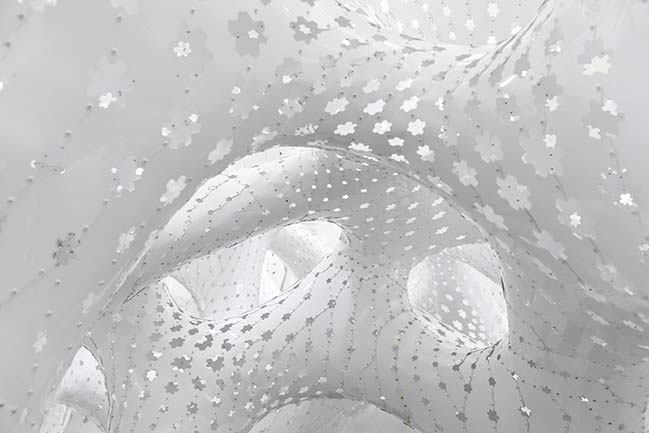 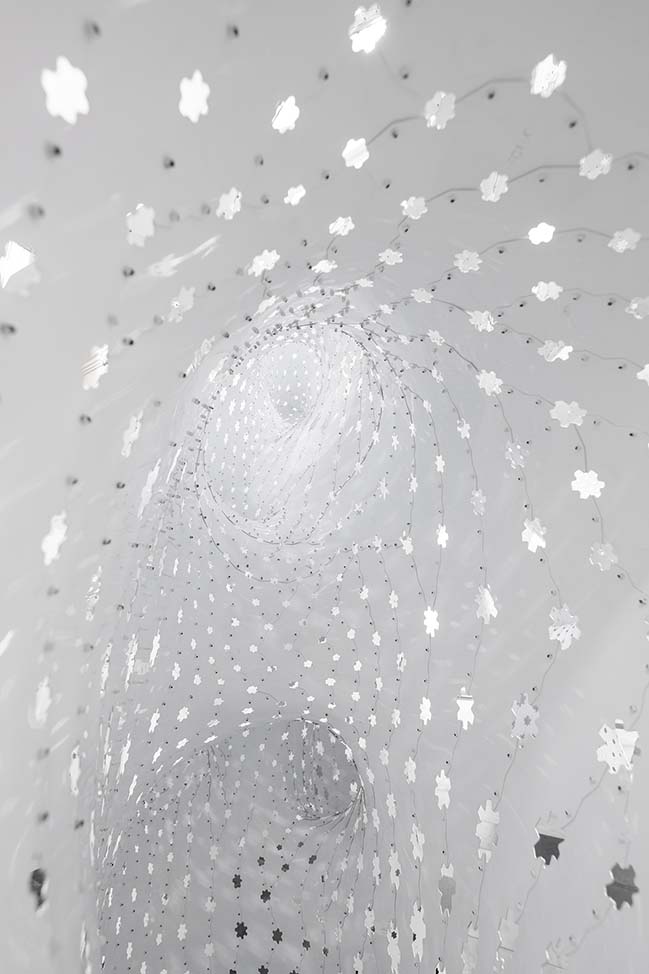 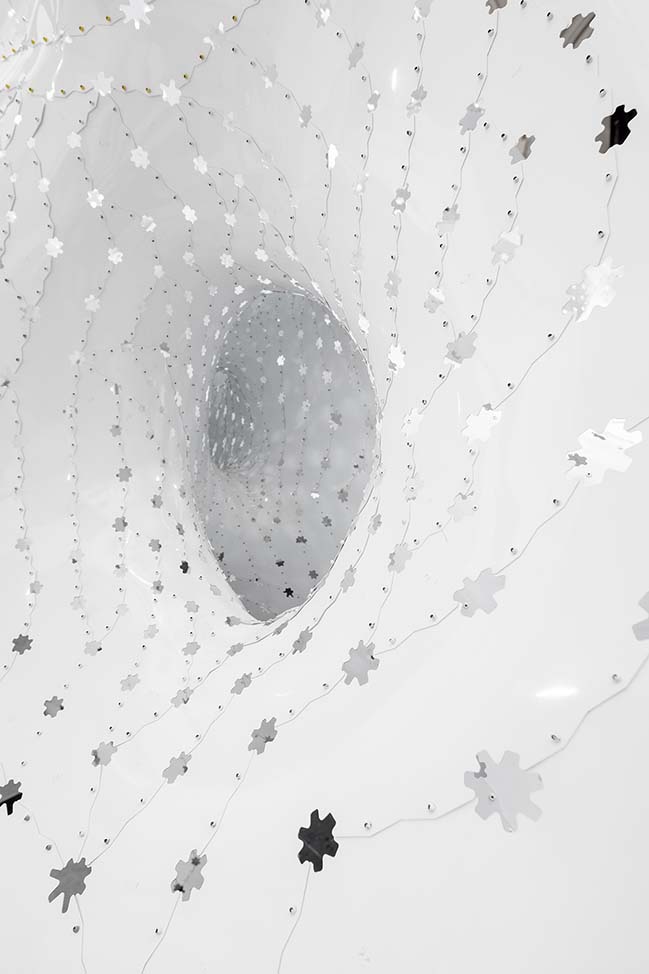 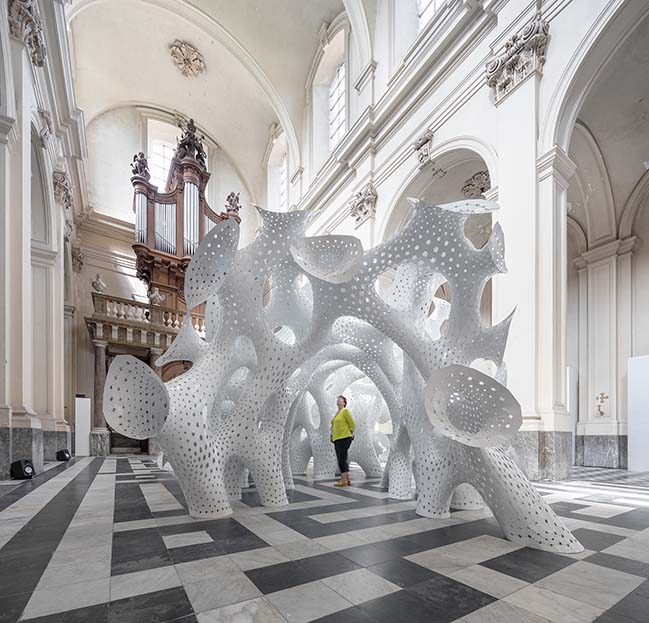 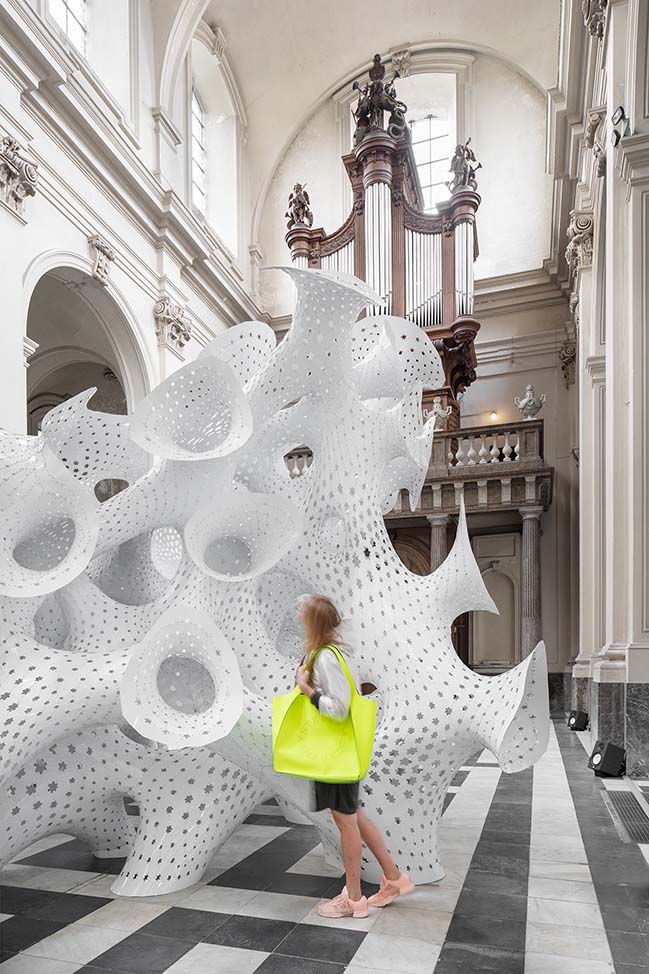 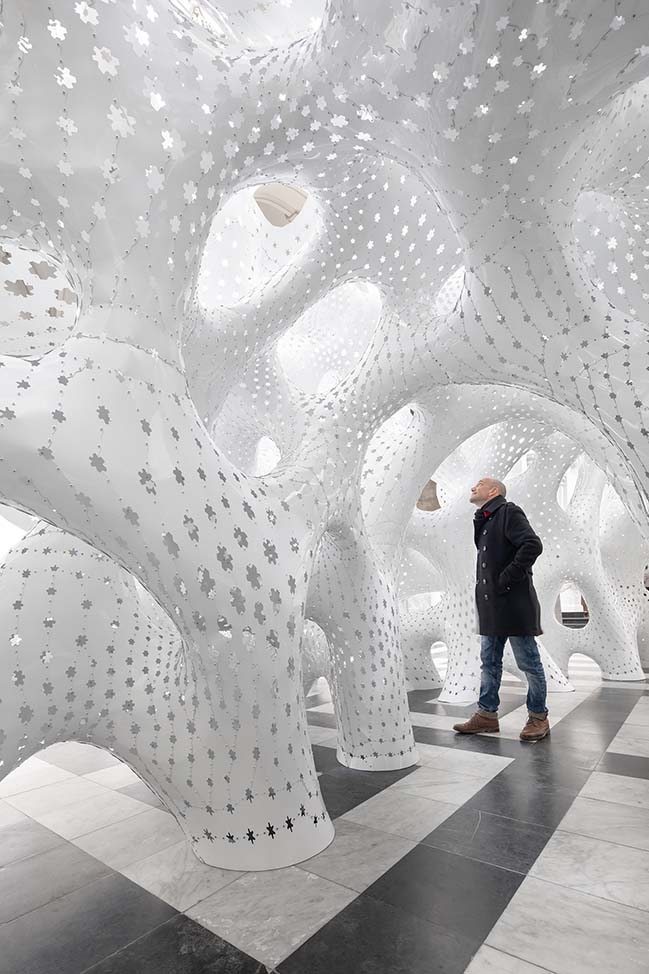 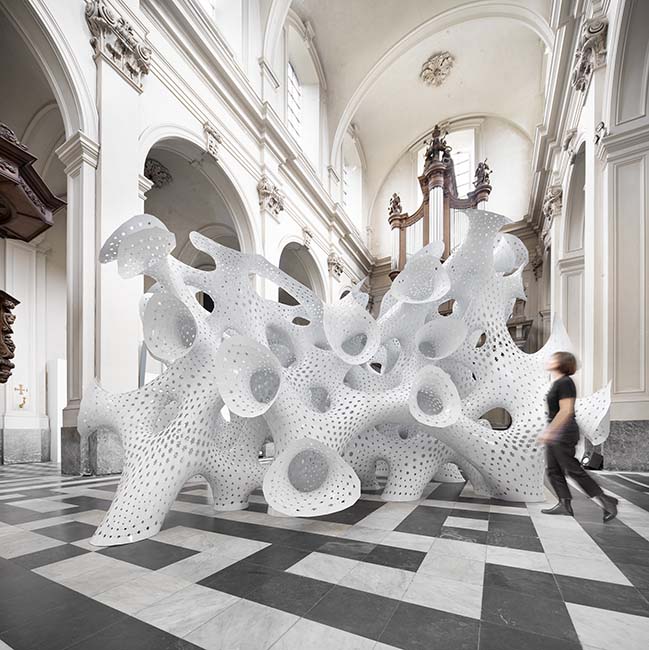 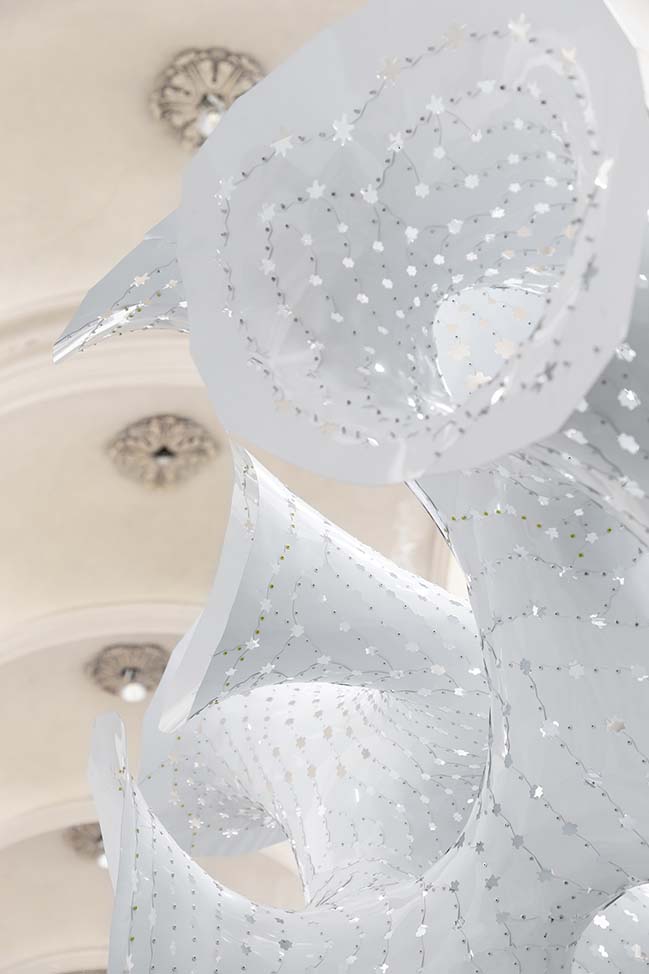 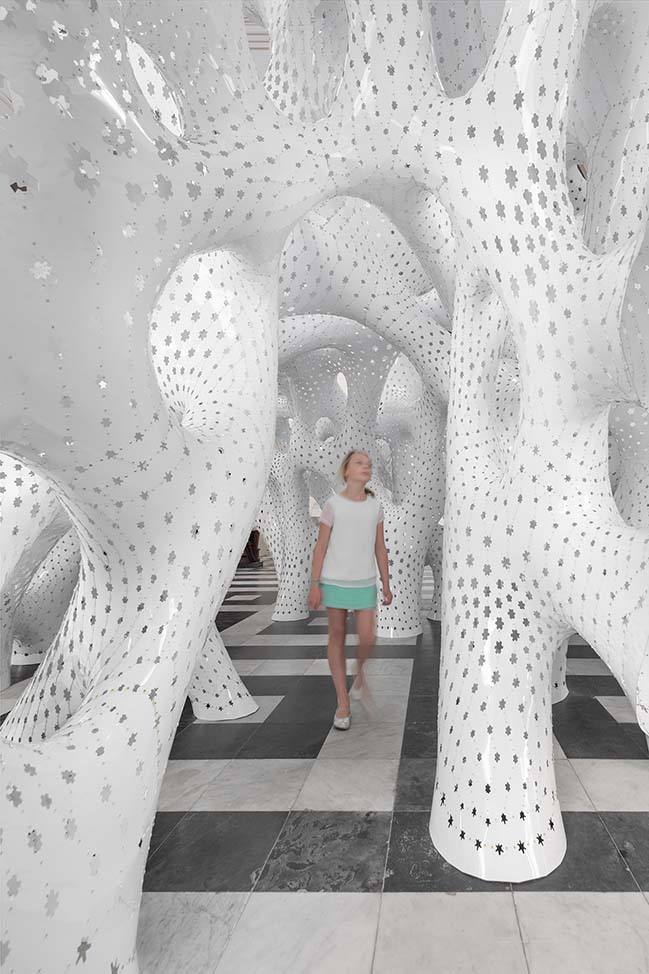 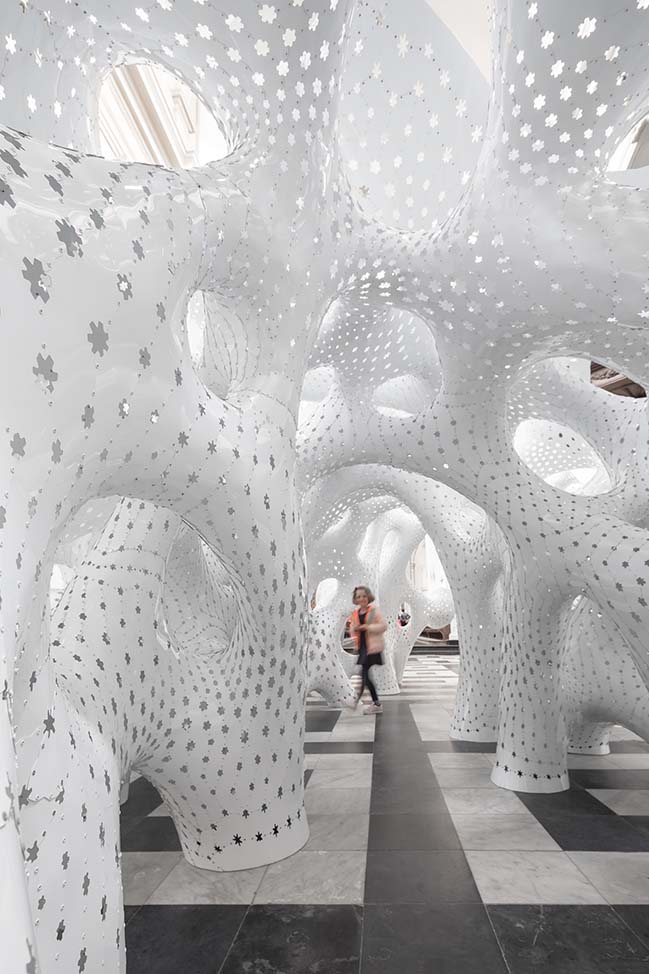 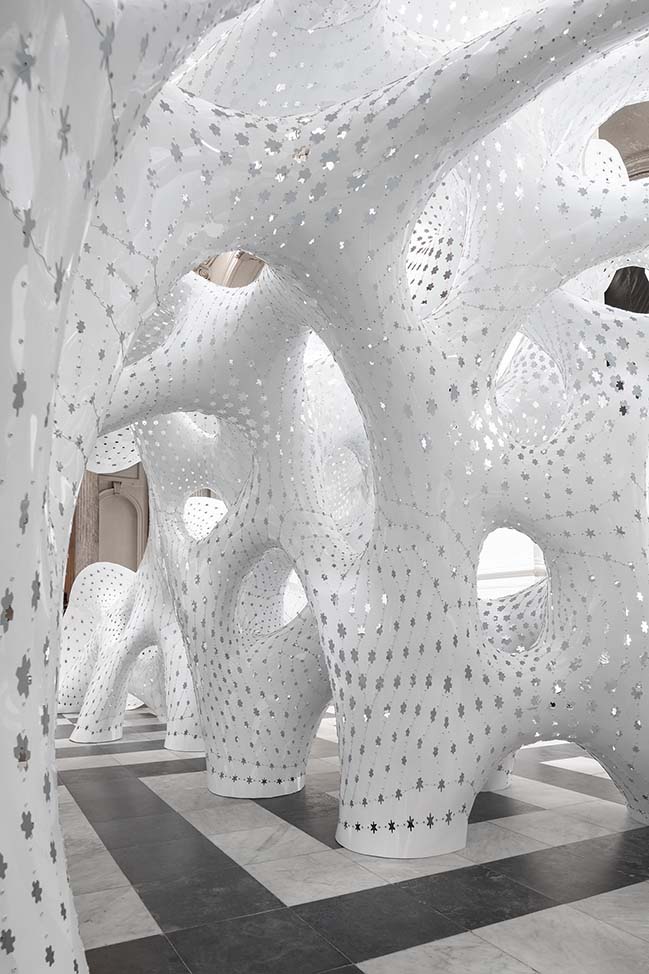 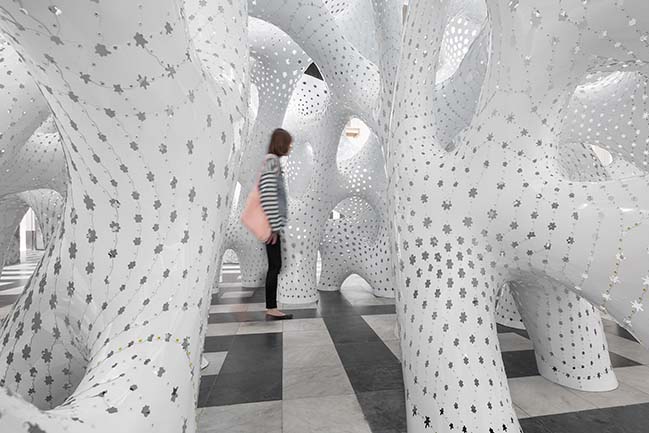 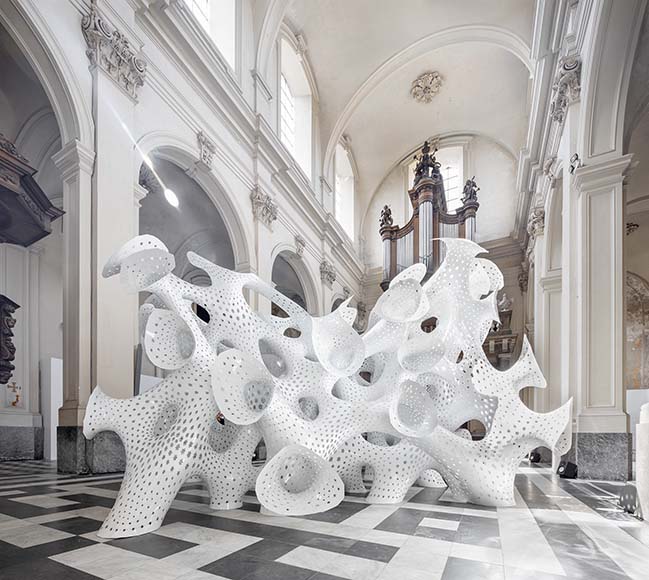 05 / 30 / 2018 For five months, nonLin/Lin is on display for the first time at the Grootseminarie in Bruges for the city's second Art and Architecture Triennial