ODA is proud to announce the unveiling of its first large-scale mixed-use project in Buenos Aires: Paseo Gigena... 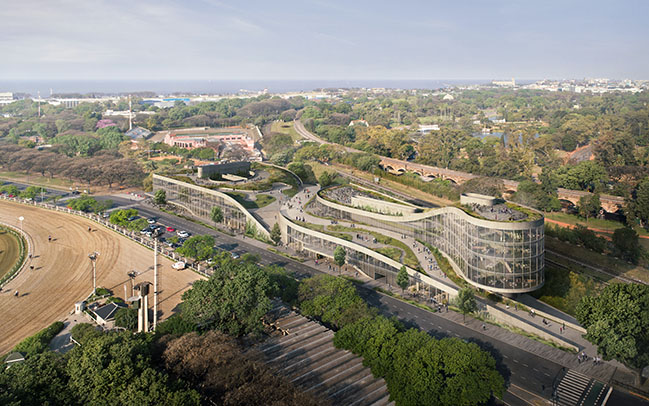 From the architect: ODA is converting a decaying parking structure into a public park and Class A office building, replacing the concrete shell with cafés, restaurants, retail, an open-air promenade, offices and a sheltered parking lot. Located in between the racecourse and the popular park “El Rosedal de Palermo,” Paseo will act as an iconic new civic space and important point of connectivity for the city, re-linking the area that today finds itself divided by this very land plot.

The government of the City of Buenos Aires granted the concession of the property known as Ámbito Gigena, for a period of 15 years to the developer BSD Investments. "We have an abandoned concrete infrastructure that does not speak at all with its surroundings nor is useful for the city and its inhabitants," explained the architect and urban planner Álvaro García Resta, secretary of Urban Development of the Government of the City of Buenos Aires. For this reason, the goal is to transform the three-story building into a “multi purpose development.” 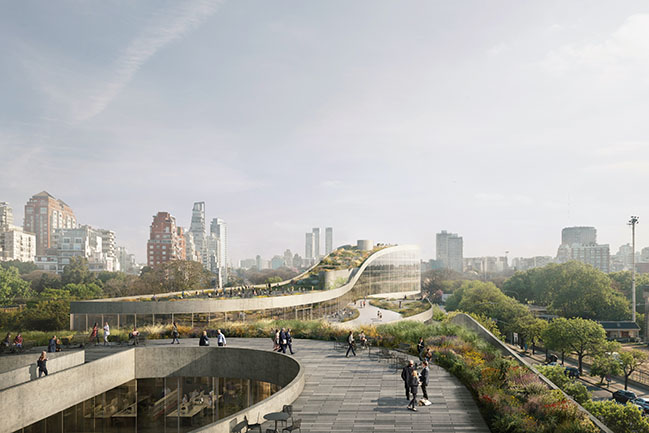 Capitalizing on the unique location situated on the edge of the active park, the adaptive reuse project completes the park loop by carrying the green path up the side of the building to the landscaped roof and ramping down the other side, connecting back to the park. The rooftop provides a continuation of the public park, complimented by a commercial brewery, as well as private terraces for office tenants, positioning the project as a key juxtaposition of the public and private sectors, unified via nature. The striking glass façade acts as a mirror to the sky and green surroundings, creating organic curves that erode away the edges of the existing parking structure.

“This project is a great example of the private sector working with the government to create a truly unique typology that will benefit the city and its citizens for decades to come,” said ODA founder Eran Chen. “These types of partnerships are the future. It’s ambitious and takes bravery and bold leadership on all fronts, but when this is completed we will have a park that will become an icon for the city, and quite possibly the coolest office building in the southern hemisphere. If you want to get people back to work, then we need to be thinking like this.” 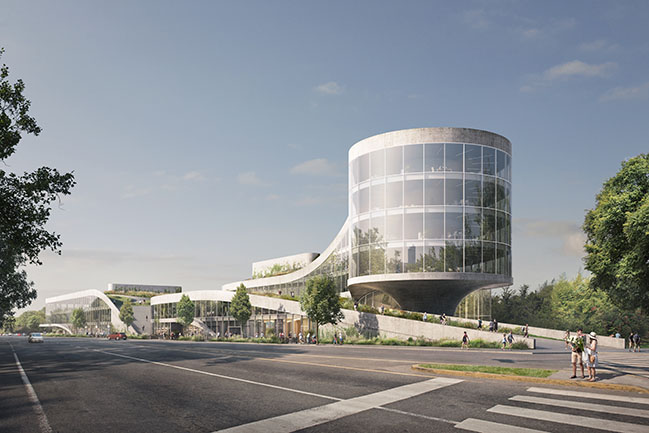 This sustainable design recycles 80% of the original structure to create a 160,000 square feet of building that bridges the two previously separated neighborhoods. Gigena will include more than 40,000 SF of public terrace and open green spaces carved with pedestrian paths and a 250-car park. The ultimate work and meeting place, the building offers 360-degree views with easy access to the main highway, making it an easy commute and desirable destination.

While this project will be a game changer for the neighborhood, it is not the first adaptive reuse project in Buenos Aires. In fact, there is a track record of other successful examples that are creating a groundswell of support. The Buenos Aires Design, built during the peak of popularity of its neighborhood, is a shopping center that merged with a new more fashionable gastronomic area, right by the Recoleta Cultural Center. The Exhibitions and Conventions Center became a continuation of Park Thays and the United Nations Plaza with its green roof, forming a large public park in a strategic enclave, and Plaza Houssay, which similarly “started from a base that already existed, in this case the plaza with a garage below, and we transformed it into something that would cope with its surroundings to serve the people,” García Resta said. 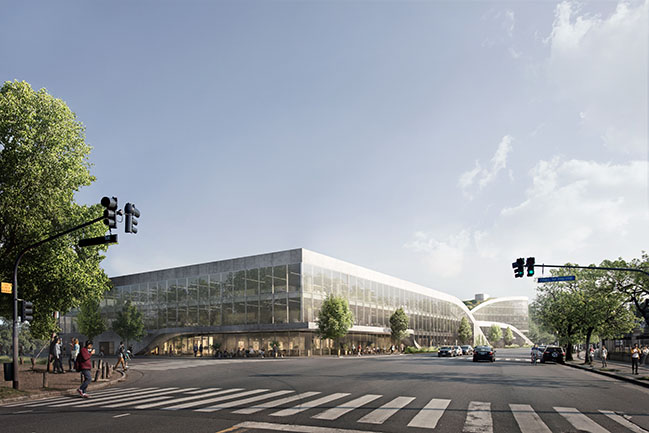 On June 28, the partial demolition of the old parking lot began and, in recent days, the Buenos Aires head of government, Horacio Rodríguez Larreta, toured the site with García Resta and the Minister of Economic Development and Production, José Luis Giusti. Paseo Gigena, named after the Argentine jockey Gigena, who died while running a race in 1912.

“The treatment given to these open air gardens is that of a wild landscape with native flora. But it won’t be a park made to contemplate, it will be a dynamic area, to stroll and explore", says García Resta, "The healthiest city is that which has a balanced mixed use of its public space. Where only one thing happens and not many, the number of people making use of these shared spaces is restricted”. 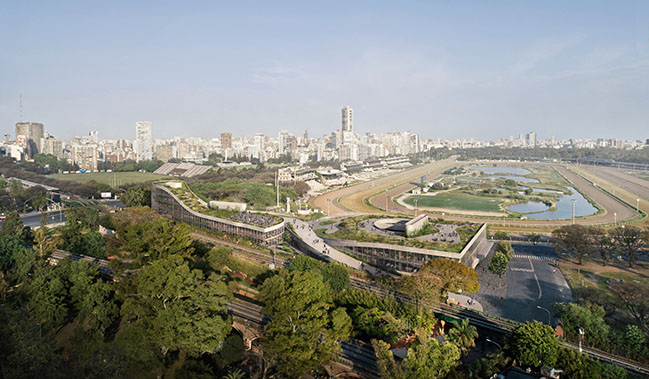 The design team includes ODA as design architect, with Aisenson studio as executive architect, Inscape Landscape and ODA as landscape architects, BSD Investments, renowned developer with projects in Argentina and United States, and Coinsa, a leading firm with a proven track record in Argentina of more than 7,000,000 SF built work.

09 / 23 / 2021 ODA is proud to announce the unveiling of its first large-scale mixed-use project in Buenos Aires: Paseo Gigena...