Tenete Traditionales, or "Hold fast the traditions", the motto chosen to endow the Parade College emblem has been at the core of the school’s values and principles, embodied by the students and the faculty which have grown and evolved with the institution over its 147 year foundation. 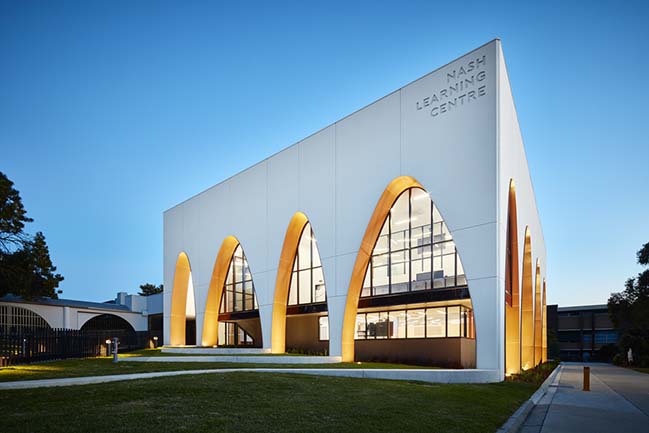 Project description: Located at the entry to the Parade College campus the learning hub is a symbol of school’s progressive pedagogy and adoption of technological into their teaching practise. The Nash Learning Centre has incorporated diverse, multi-mode learning spaces into its overall planning. The Hub focusses on common spaces with a mixture of communal desk space and private learning areas. There is a focus on light open spaces that are functional and stimulating learning environments. 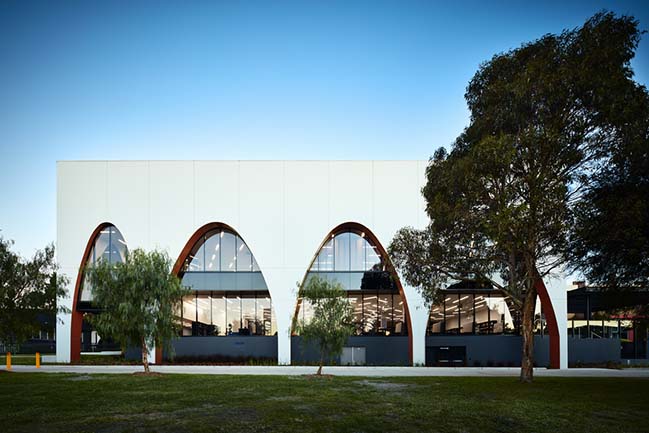 CONCEPTUAL FRAMEWORK
The existing campus is a robust brown brick modernist design. The new learning hub was a departure to the overarching architectural style and continuity of campus; almost the antithesis in colour, materiality and design language. The modernist lines were replaced by arches as the concept focussed on creating an architecturally significant building, which was at the centre of the campus, reflecting of traditions of faith and community. The Learning Hub acts as a literally colonnade, typical of the architectural language traditionally employed for an educational or monastic campus. The colonnade directs the school community through it, with the spaces within the arch ways being able to be occupied as a Learning common. 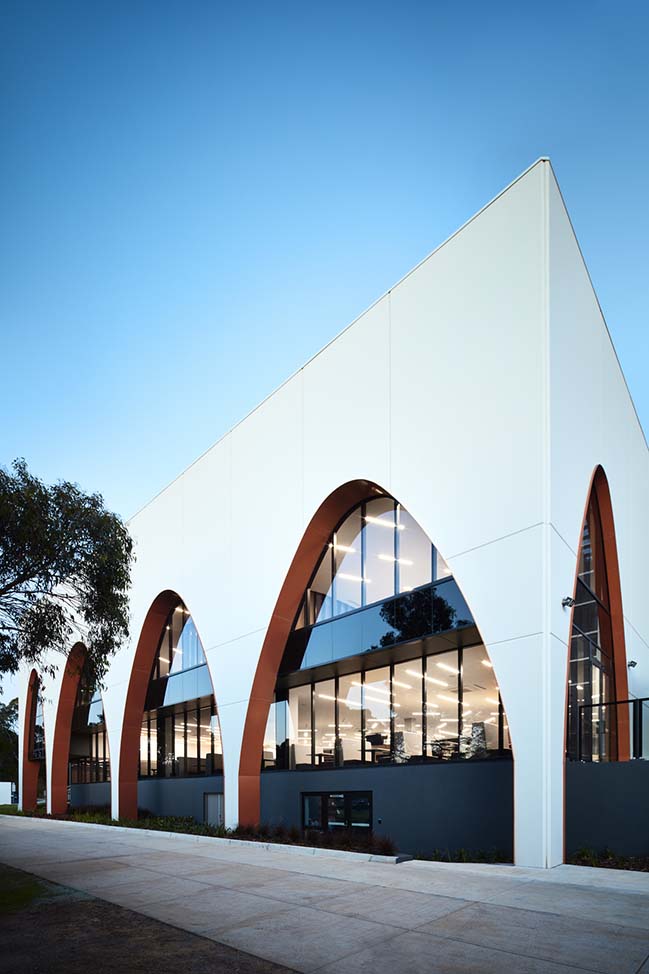 RELATIONSHIP OF BUILT FORM TO CONTEXT
The built form of the colonnade reflects the traditions of the Christian Brothers educational history, it reflects the context of faith and traditional educational and monastic architecture. The Nash Learning Centre is located at the forefront of the school, it is a deliberate point of difference to the existing context being 1960’s chocolate brick, breaking the established context with its clean white built form. The juxtaposed built form is a point of pride displaying school’s identity of education and technology within architecture, the building acts as sign that the school is evolving. The arches promote a physical connection via entrances linking existing areas of the school as well as a visual connection to its setting through arches to treetops outside, a connection to the community through its prominent presence at the entrance of the school. 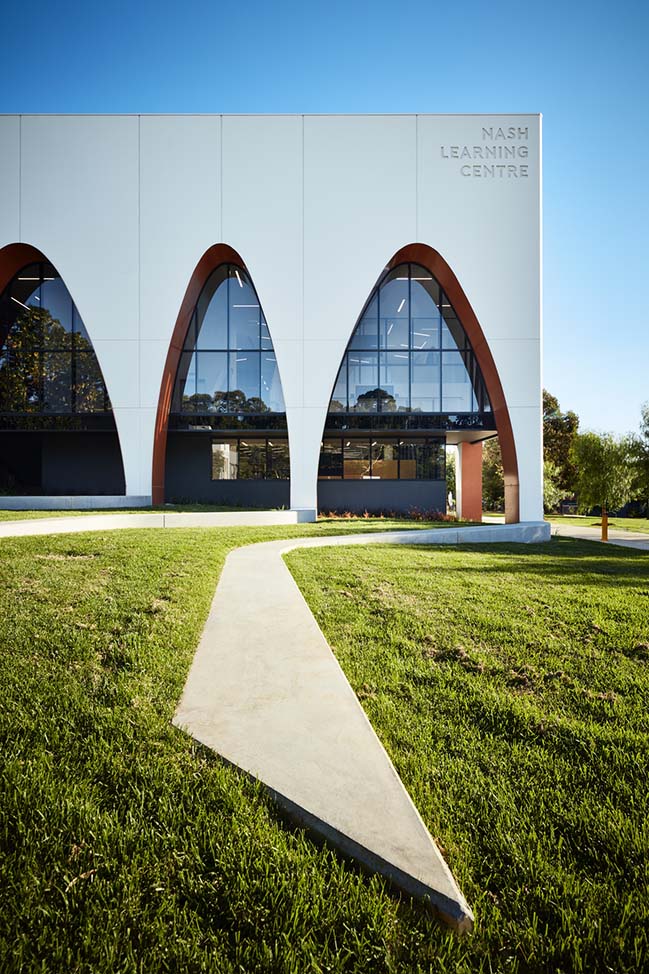 PROGRAM RESOLUTION
The brief’s requirement was to respond in a traditional, architectural and a technological manner, adapting contemporary approaches to pedagogy through the separation and adaptation of the flexible spaces which were achieved through splits over two and a half levels. The arrangement of smaller private spaces to the perimeter consolidates the communal spaces and maintains visual links to the outside with the natural. There is a dichotomy of old and new split over the two main levels where traditional literature is located on Ground Level, where on Level 1, interactive multimedia is used and displayed on an array of touch screens within the Project Hub.

Integration of Allied Disciplines
In addition to the general integration consultants, some fundamental coordination with the structural engineers and the builder was necessary to produce the level of detail required for the desired quality finish of the precast arches and their glazing. It was also necessary to gain the services of a multimedia and audio visual consultant when considering the Project Hub and the Multimedia Rooms. 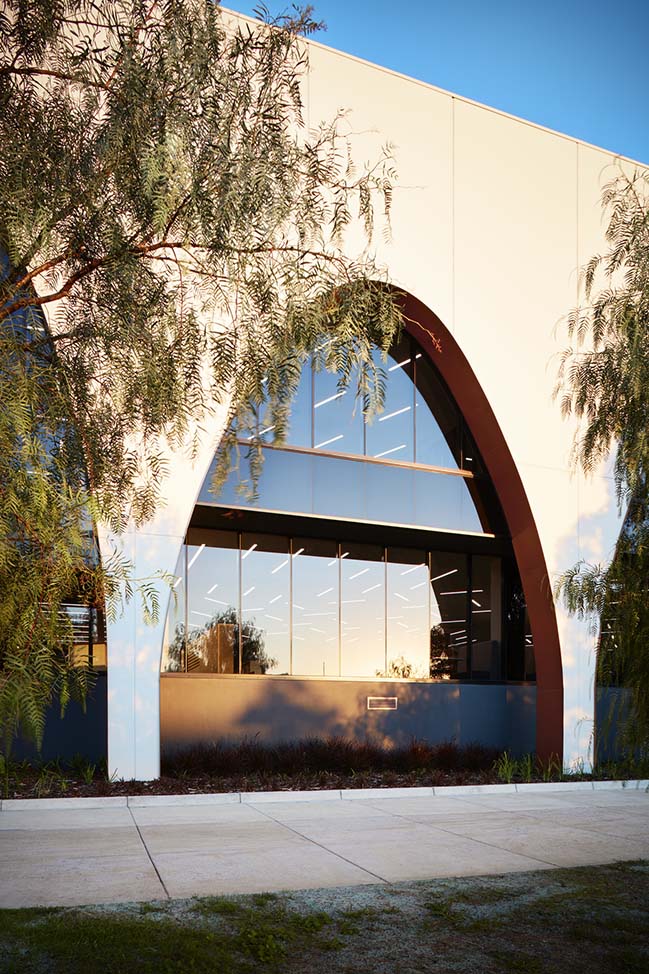 COST/VALUE OUTCOME
The original Contract Sum of just under $5M increased by around 5% over the span of the build.

SUSTAINABILITY
Throughout design and construction, there was a focus on retaining as much of the original structure as possible. The outcome being the retention of the basement structure as well as the ground floor slab. One other necessary item that was needed to be carefully removed and reinstalled was a large stained glass mural which now sits above the eastern entry linking the theatre to the new Learning Hub. Being designed largely as a colonnade, the spaces between the arches were enclosed with glazing. The large areas of glass, allowing the building to be flooded with natural light were tempered with a ceramic frit applied to control the amount of heat gain and solar ingress. 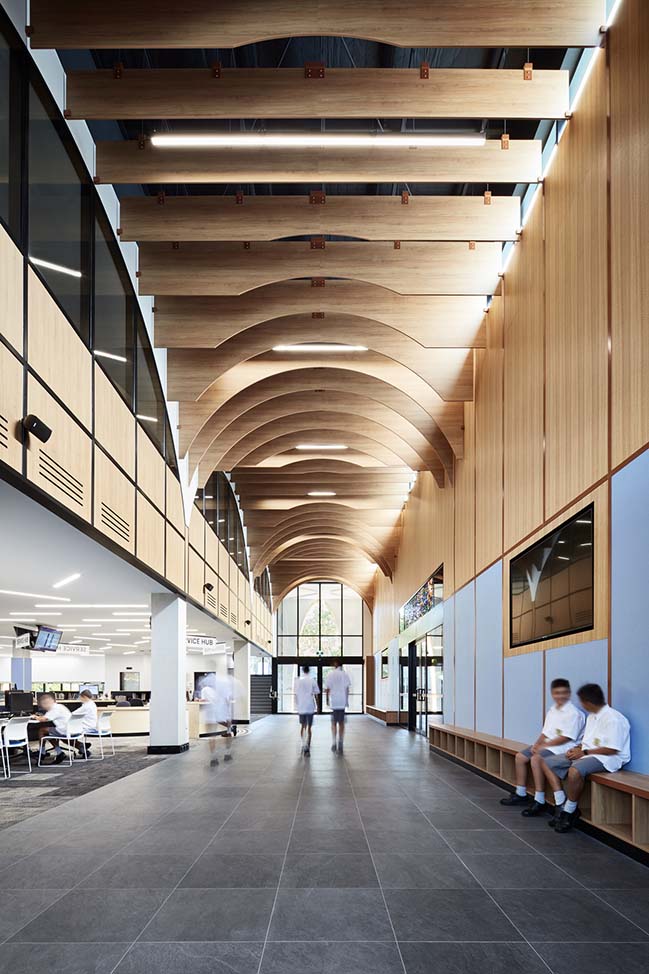 RESPONSE TO CLIENT AND USED NEEDS
Parade College’s intention was to regenerate their original facility to move to the forefront of education and technology. The new Nash Learning Centre is a place where students gain the advantage of the traditions Parade College offer within their current educational environment, as well as the enhanced opportunities a contemporary technological educational facility can provide. 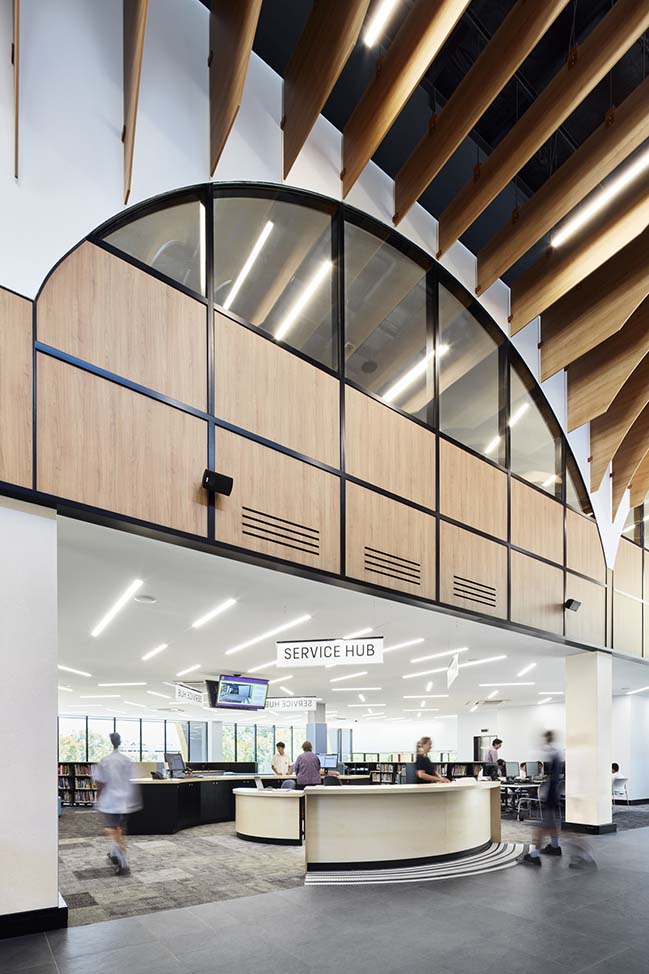 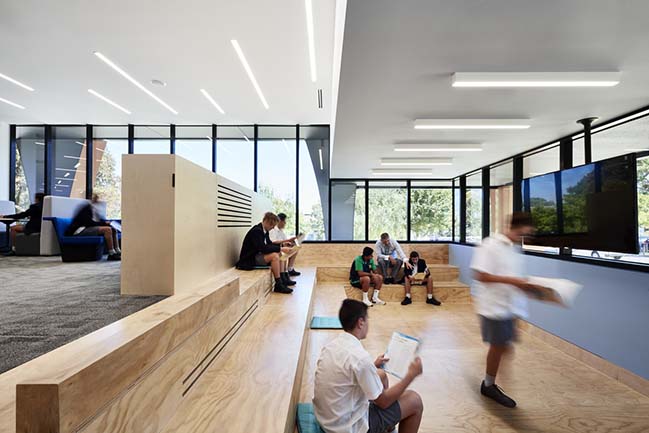 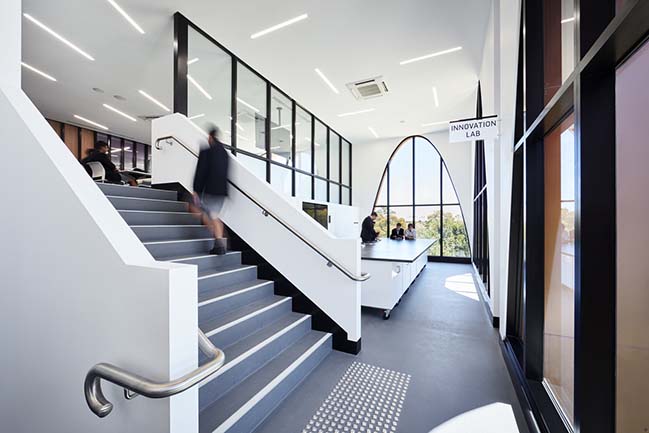 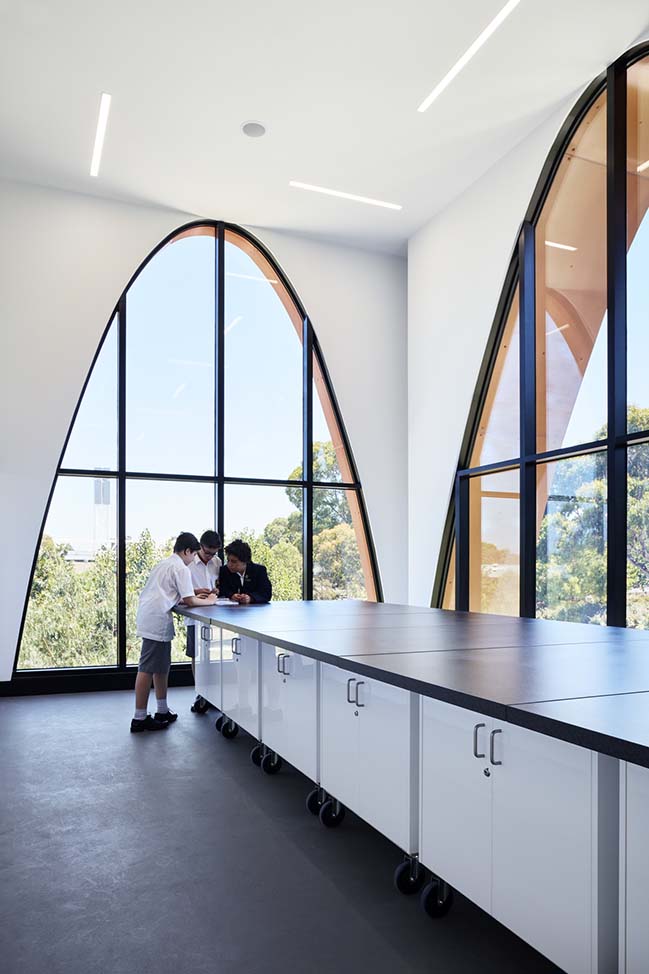 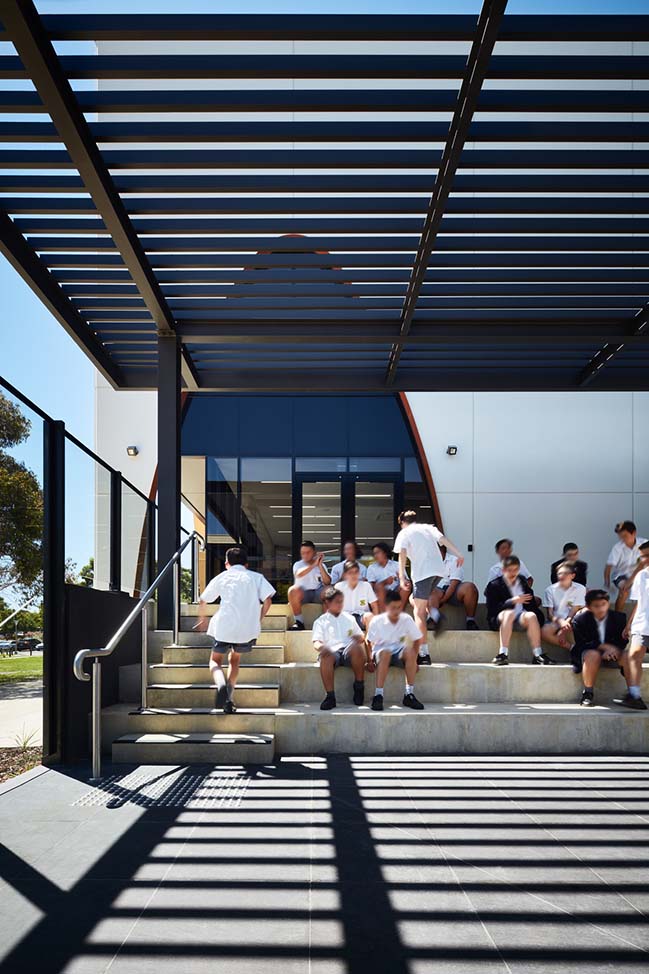 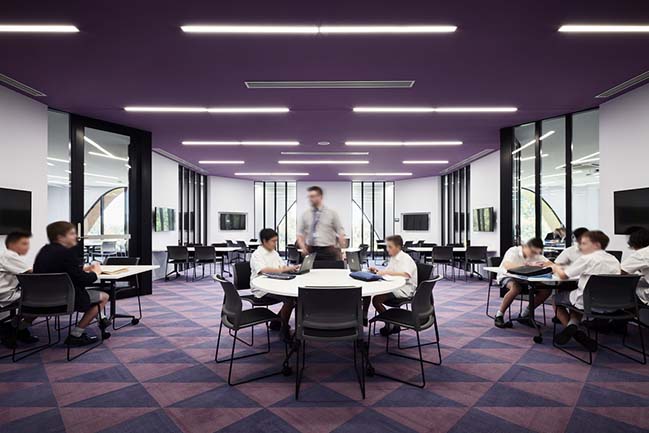 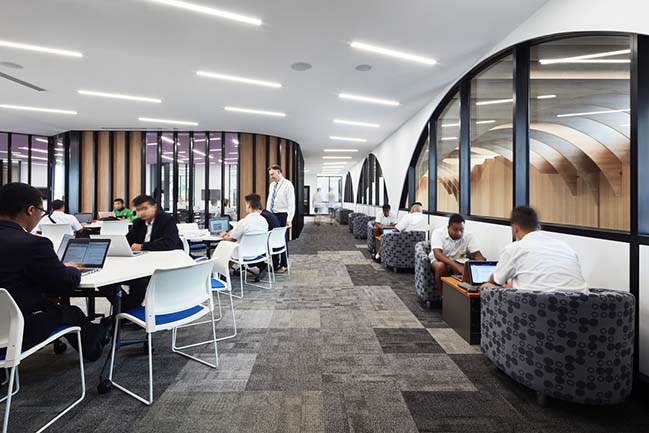 03 / 15 / 2018 Tenete Traditionales, or Hold fast the traditions, the motto chosen to endow the Parade College emblem has been at the core of the school’s values and principles