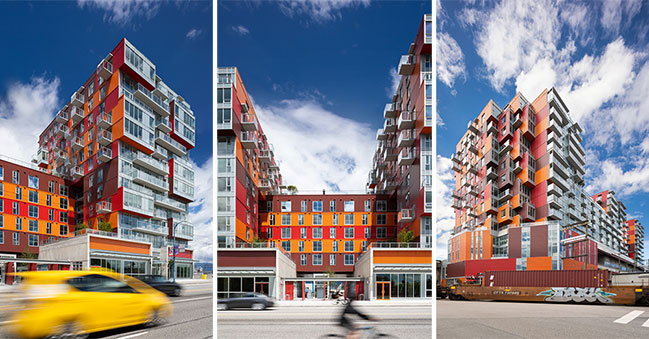 From the architect: The 300,000 square foot building covering almost an entire city block is located on East Hastings Street in Strathcona, one of Vancouver’s oldest neighbourhoods. The site of the development, near the downtown core, on the edge of the Port of Vancouver, has historically been one of industry. To maintain existing industrial space while increasing the local housing supply in the area an innovative approach was called for. The Strathcona Village project successfully pioneered the integration of previously considered incompatible programs into a new hybrid mixed-use typology for Vancouver. 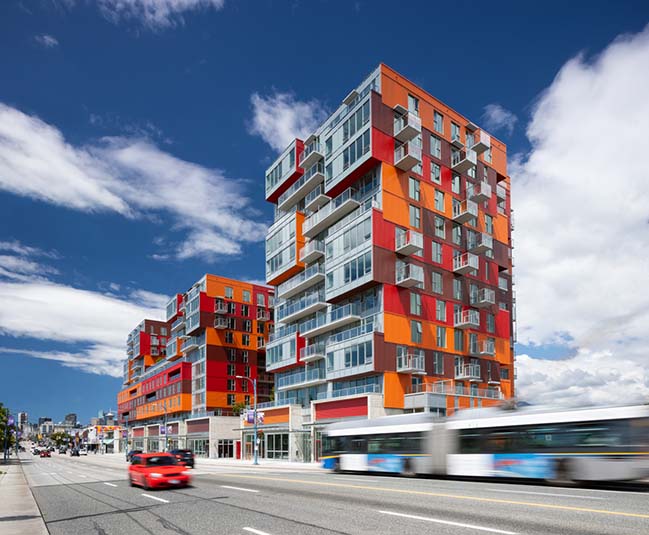 The development is a sustainable community model, providing much needed affordable housing, while maintaining and generating light industry in the neighbourhood where approximately thirty percent of its population work locally. The building includes 70 units of City-owned social housing, 23 of which are rented at shelter rates in addition to 17 that are designed for families with young children, meeting the Downtown Eastside Housing Plan. 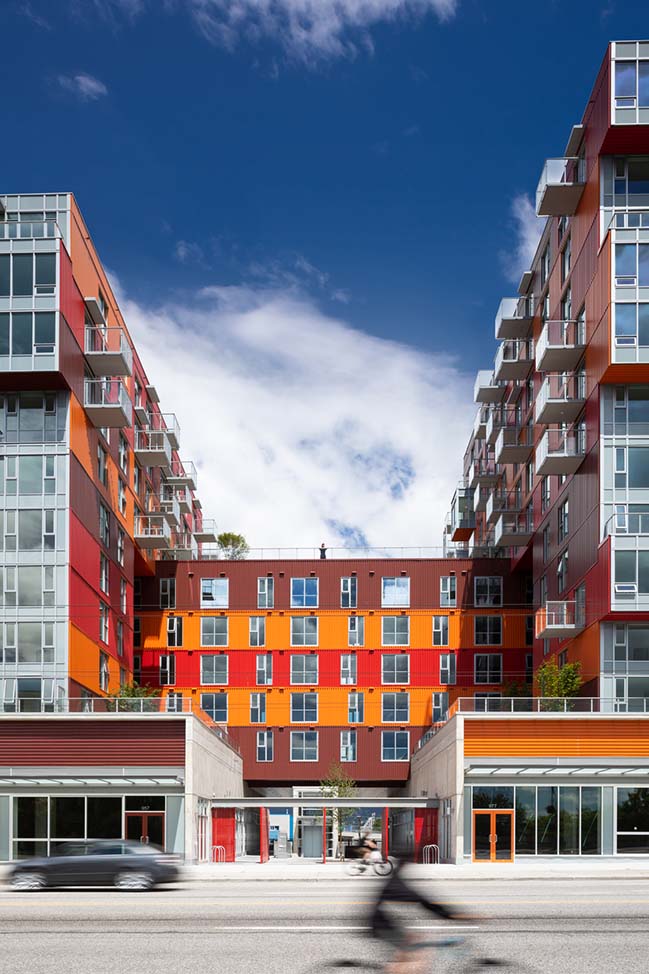 “Strathcona Village’s mix of uses, combining much-needed affordable homes with job spaces in PDR (production, distribution repair) demonstrates how innovation in planning and development can help us achieve our city’s sustainability and economic goals,” said Kira Gerwing, former City of Vancouver Planner, currently Senior Manager of Community Investment, Vancity Credit Union. “This project represents a model of revitalization without displacement in a neighbourhood that still strives for meaningful development policies that enable economic inclusion coupled with safe and adequate housing. This model for mixed use projects that retain light industrial businesses should scale to other urban centres in our region. We know these uses are critical to building a robust, diverse, and sustainable urban economy.” 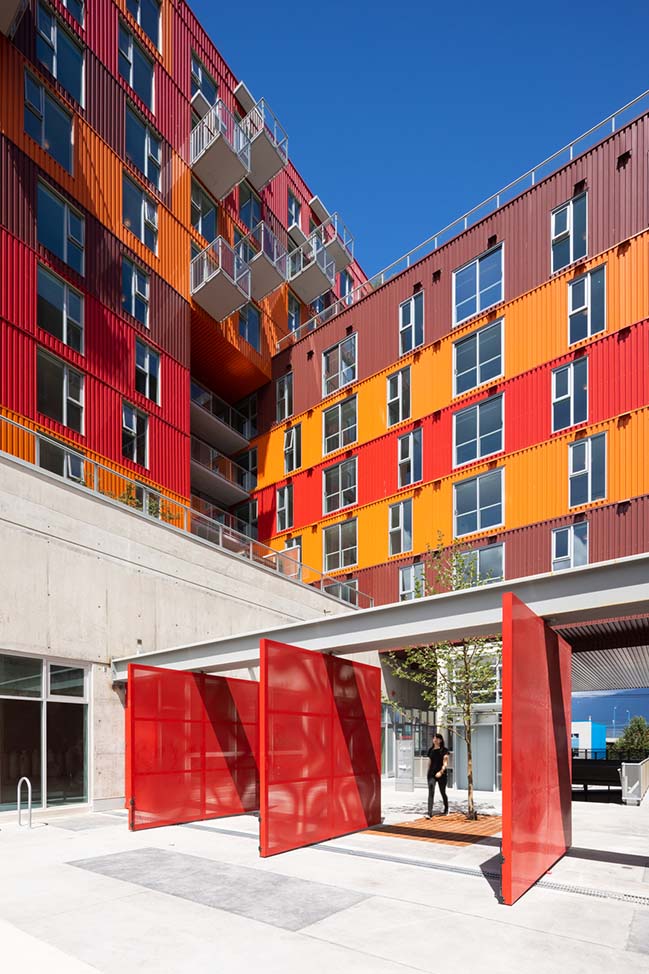 The building’s mass is distributed across three low rise residential towers that sit atop a substantial multilevel mixed-use podium. By taking advantage of the site’s one-storey topographic drop between the main street and the lane way, the industrial program in combination with retail and office spaces, are located at grade across two, double-height levels of podium. “Incorporating these light industrial uses on the ground level allowed us to accommodate a significant portion of the development to residential use without altering the character of the neighbourhood,” explained Daniel Eisenberg, Project Lead, GBL Architects. Measures to mitigate the industrial impact on the upper residential units include separate ventilation systems between uses and a maximum industrial unit size of 5,380 sf. 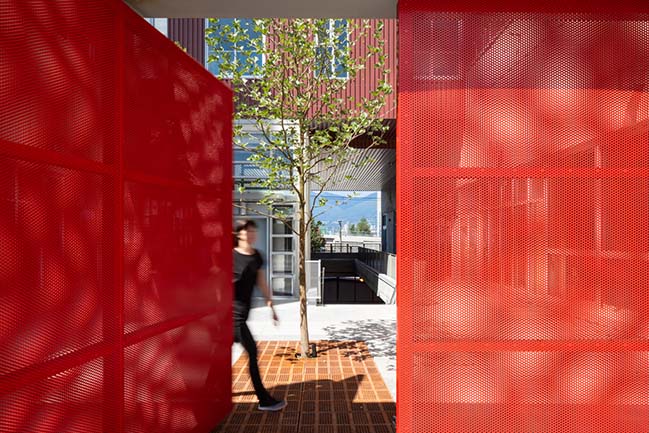 Careful design considerations and programmatic distribution create an animated cadence along the building’s main public elevation with the industrial spaces, defined as Production, Distribution, and Repair (PDR) interspersed with residential entrance lobbies. The robust and lively nature of the PDR space is celebrated through the inclusion of large doors and windows that open directly onto the main street providing superior working conditions within and enhancing interchange with the public realm. 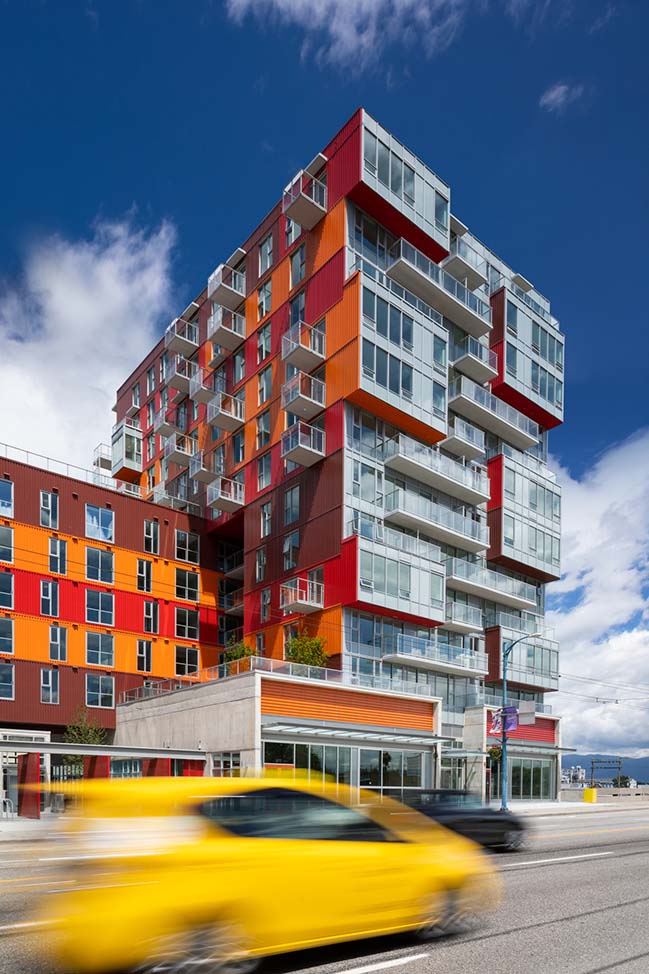 The street elevation zigzags along its length, emulating the historic ‘sawtooth’ massing pattern of the main street. This articulation provides open space at grade for residents in addition to creating a generous south facing public plaza at the eastern end of the development. The 3,000 sf plaza is a focal point for activities at street level, with a pedestrian access route through the building the public is invited to access the industrial spaces, which may include ancillary retail, and to share breathtaking mountain views overlooking the Port. 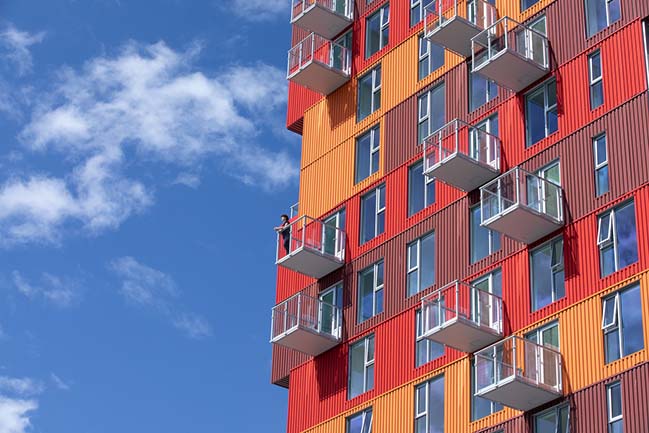 “Working closely and collaboratively with the design team and City staff,” said Bruno Wall, President of Wall Financial Corporation (WFC), “we were able to successfully create a building program that incorporates the needs of the industrial users while ensuring a comfortable living environment for the residents.” 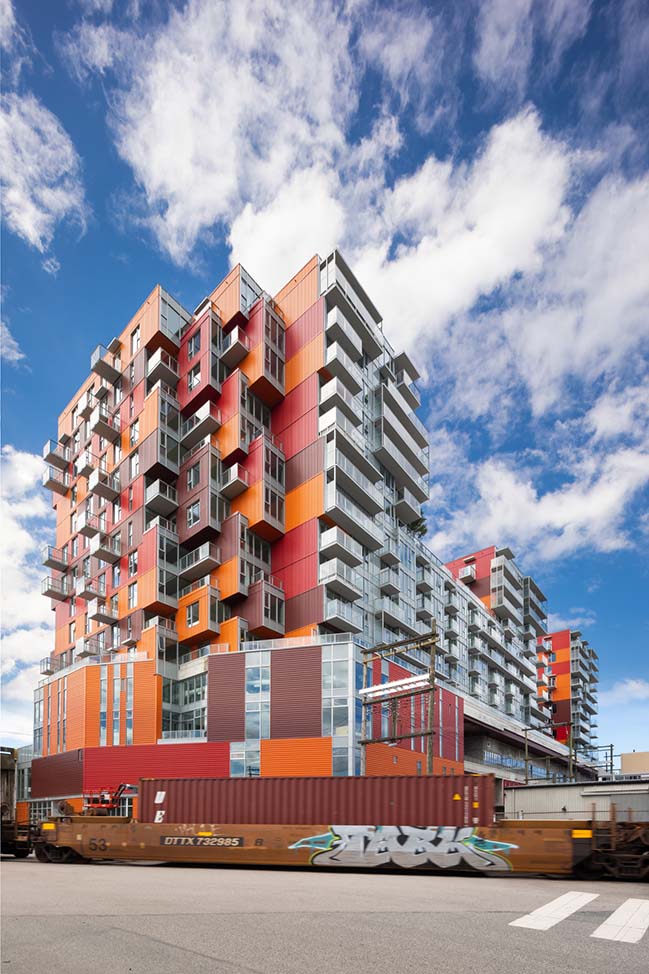 Strathcona Village reflects its location not only in function, but in form as well. Taking cues from the neighboring infrastructure, the building volume is simple in stature while the dynamic façade is visually broken up by a loose rectangular grid, conceptually resembling stacked shipping containers mirroring the shapes and colours of the Port’s ever-present railway containers and loading cranes. The lively variation established by the use of alternating colours in the façade is enhanced by protruding open and enclosed balconies that punctuate the residential elevations, giving the building a unique presence in the city skyline teeming with glass towers. 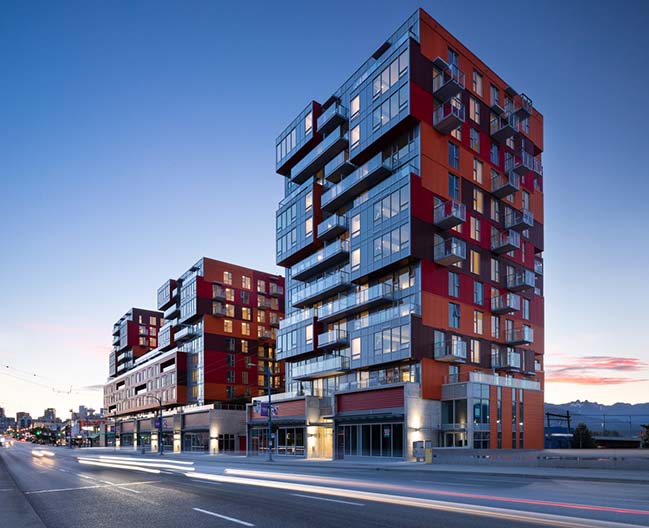