The House of Sports in Bezons by agence ENGASSER & associés

As one consistent entity, the Sports Centre pulls together a large number of elements from different briefs, i.e. an already-existing gymnasium, swimming pool and indoor tennis courts with the creation of a multi-purpose arena, a boxing hall, a bodybuilding hall, two dojos, a football pitch with stands, outdoor tennis courts and a clubhouse. 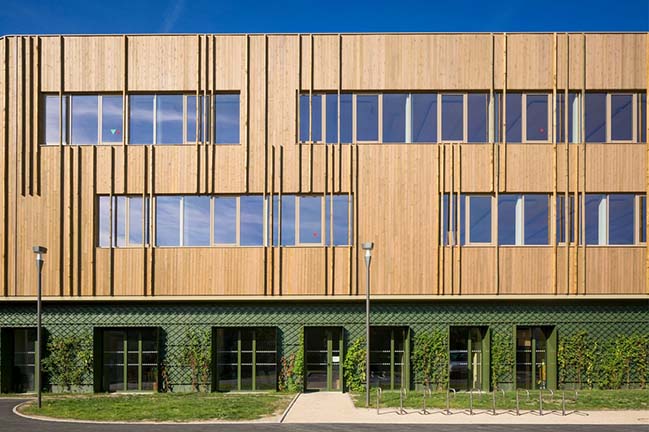 From the architect: The project is comprised of the three following strong elements:

• An entrance hall serving as the connecting point between the sports facilities; this entrance hall is highlighted by a broad horizontal line in continuity with the new building so as the have all the buildings revolve around each other and unify the two halls leading to the sports facilities
• A green base like a vegetal hedge that breaks up and lightens the building as a continuation of Bettencourt Park
• A two-floor hanging timber building that contains the sports halls and stands on the green base like lanterns. 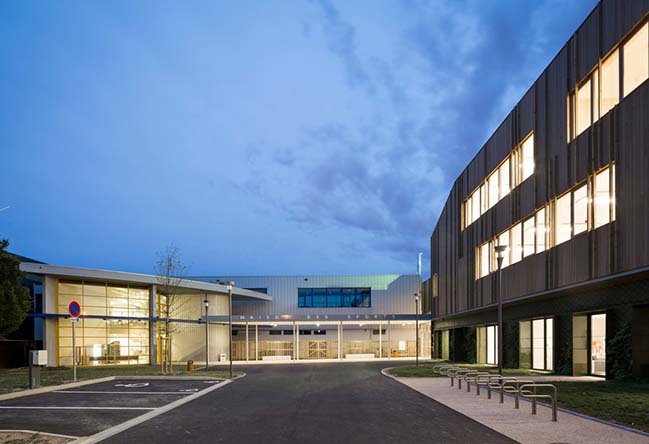 A green base extension of the park
The new building is located in the extension to the park that occupies the north portion of the plot. Like an extension of this park, the ground floor is composed of an anti-graffiti glazed concrete facade doubled by a hedge of climbing plants, 50 cm thick at a height that corresponds to that of the entrance hall. This green base divides the building in two and lightens it. Composed of plants requiring little maintenance, it isn’t a plant wall but a hedge growing from the ground. The non-invasive creepers grow up the trellises to the first floor without causing harm to the building in front of which they stand. 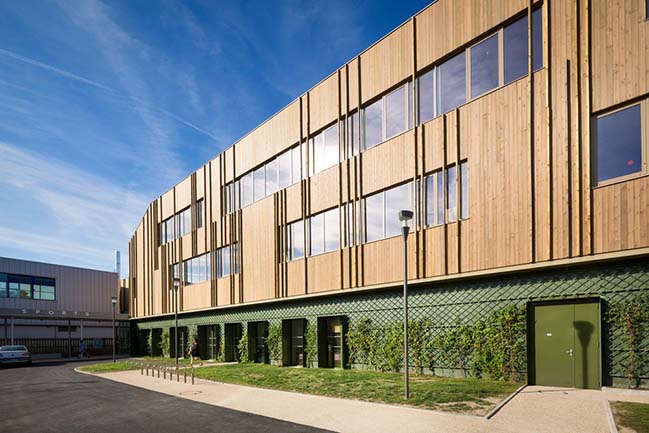 A hanging timber centre
The wooden centre stands on the green base, two constituent floors of the building (reception, offices and sports rooms) totally clad in timber. The facades are livened up by large timber spines that give rhythm to the cladding’s shadows and extra thickness. They are generously glassed on the two best orientations favourable for practicing sport, i.e. the north and northeast, allowing athletes to enjoy a bright, open atmosphere that gives onto the park. 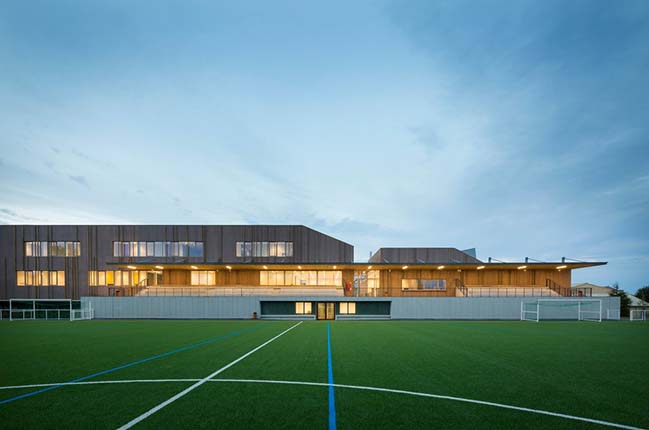 An open, bright reception area
With its generously glassed-in facade and roof, the central entrance hall lets in natural light to the core of the Sports Centre. Being walk-through, it offers an uninterrupted view of the football pitch, and its double height (nearly 8 m) creates an immediate rapport with the bar on the first floor. The caretaker’s lodge, located very near the entrance, and a wide reception desk in the hall make it possible to monitor the access points and guide visitors. 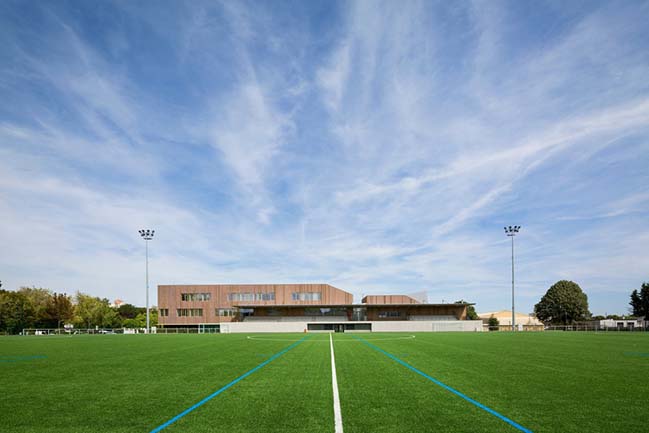 On the ground floor the hall gives access to the bodybuilding room, toilets, offices and premises for sports associations. With the lift and central staircase, it links all the sports rooms located on the upper floors. 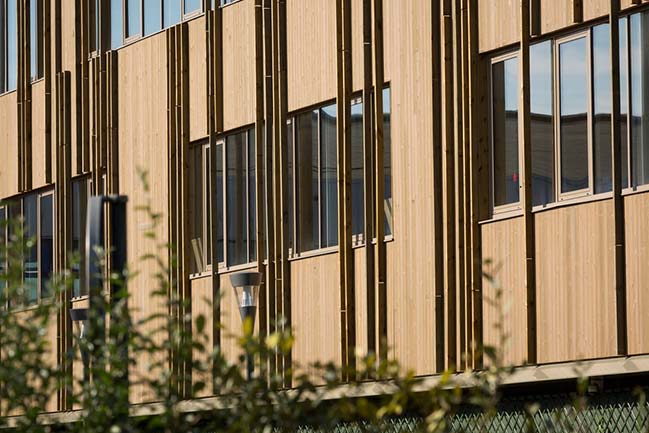 The reception, cafeteria and bar areas at the core of this atrium are organised directly with 3 briefs for the sale of drinks and snacks via a counter and three-directional glass partitions:
•  towards the hall on the mezzanine
•  towards the stands of the football pitch
•  towards the terrace, an extension of the swimming pool’s sun deck.

The stands are arranged so as to allow a wide, same-level platform with the bar, making it possible to watch matches with a panoramic view from inside. 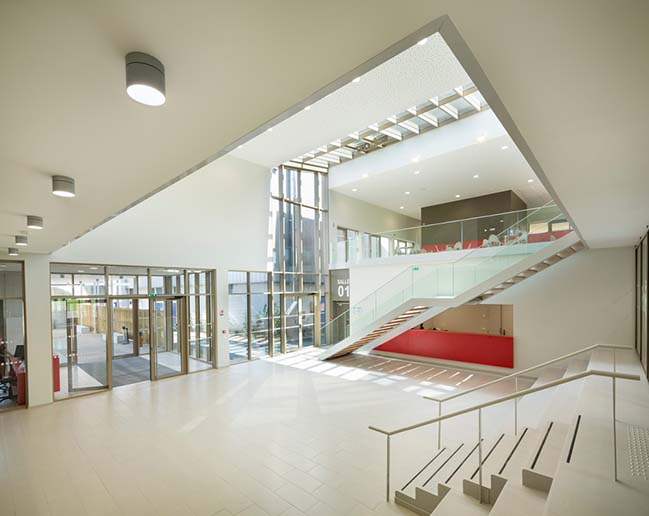 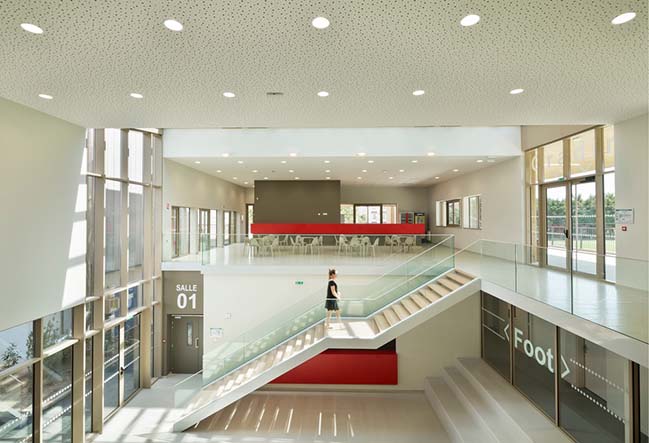 The halls are built with pre-poured concrete slabs providing the sports areas with handsome volumes without intervening pillars. The ceilings are offset, enabling the insertion of light fixtures and acoustic panels between the slabs. Each hall has two exits and areas for changing rooms and storage space. 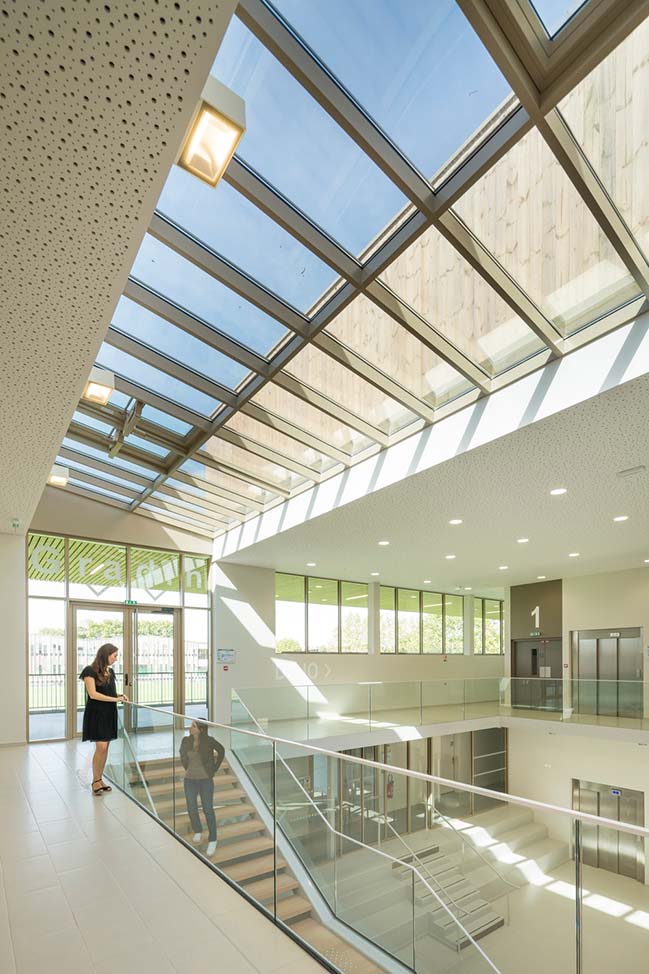 Generous, pleasant space in the annexes
The changing rooms located on all floors of the Sports Centre are walk-through and adhere to the street-shoe/sport-shoe concept, i.e. people enter the changing rooms with dirty shoes and emerge in the sports halls with clean shoes. The changing rooms are often grouped by two to limit the need for service ducts and to pool the wet areas (showers, toilets, etc.). 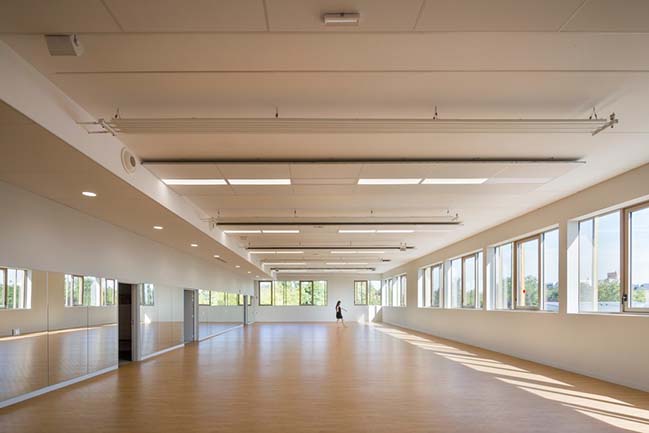 The hallway leading to the sports halls is also located on the facade side, giving rise to well-lit, friendly foot traffic and a panoramic view of the outdoor sports fixtures. 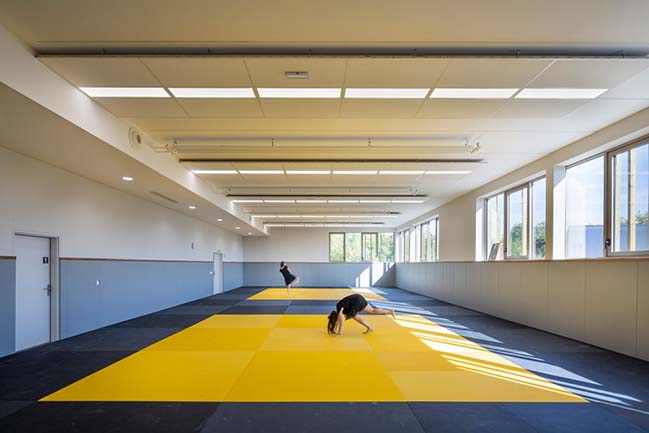 The bodybuilding gym has direct access to the entrance hall and is wide open to the outside. It has a glass wall onto a small patio created along the swimming pool facade by a hedge that reproduces the base principle of the Sports Centre. It forms a kind of landscape in front of the bodybuilding room. 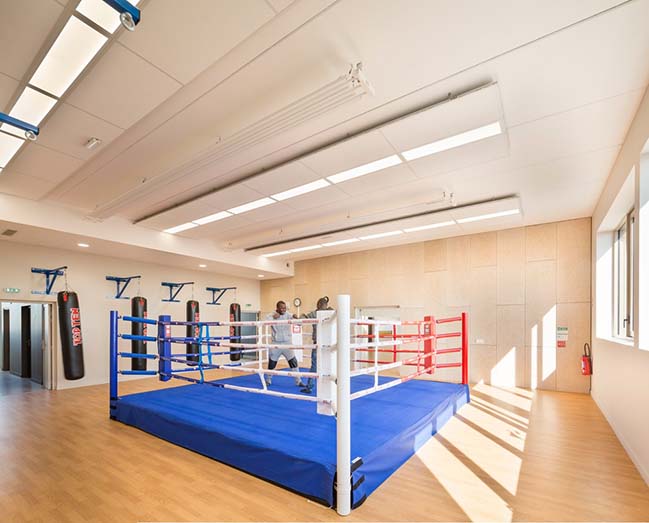 A plethora of outdoor activities
The football pitch has been laid over a previous one, making it possible to conserve part of its original shape whilst enlarging it. It also made it possible to place the stands up against the building. 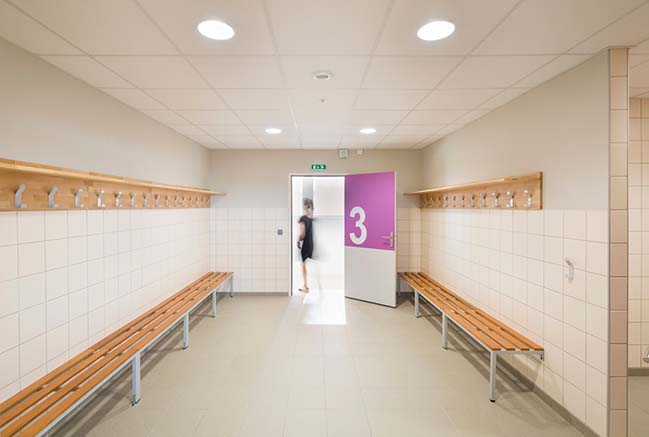 The roof over the stands is composed of a light frame supporting a metal cover with timber cladding on the under side. Although the stands’ 300-seat capacity abuts against the Sports Centre’s building, it is entirely independent in its use.

There are 4 access points, three of which are free-standing:
• a central access point from the pitch
• two access points on either end of the stands for independent use
• and access directly into the entrance hall that can be opened or closed depending on needs 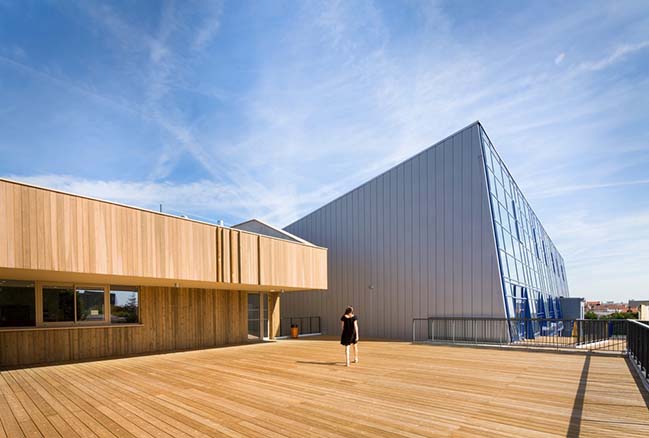 The running track has been located between the football pitch and the tennis courts, enabling the separation of the two areas and preferential access. 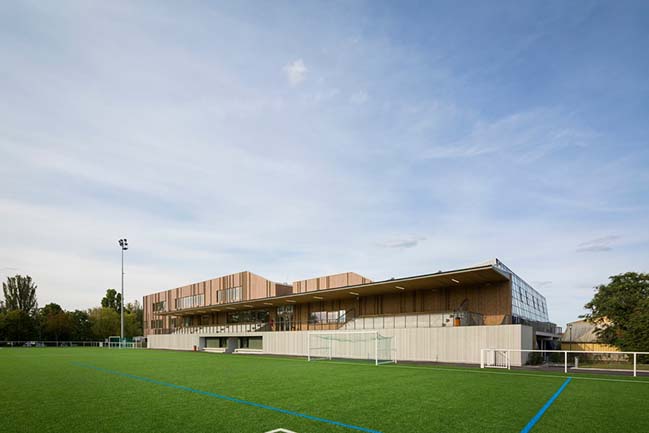 Three new tennis courts have been placed at the end of the plot with the best possible sun exposure for play. The clubhouse is located near these new courts so as to create a tennis hub. 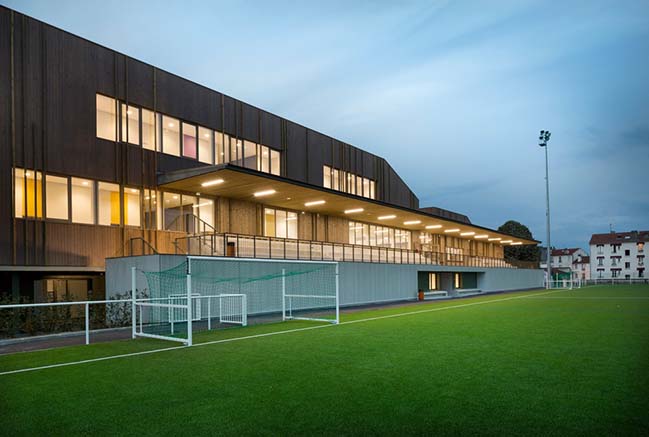 A path enabling access for people with special needs makes it possible to reach the already existing indoor tennis courts via a landscaped passageway. 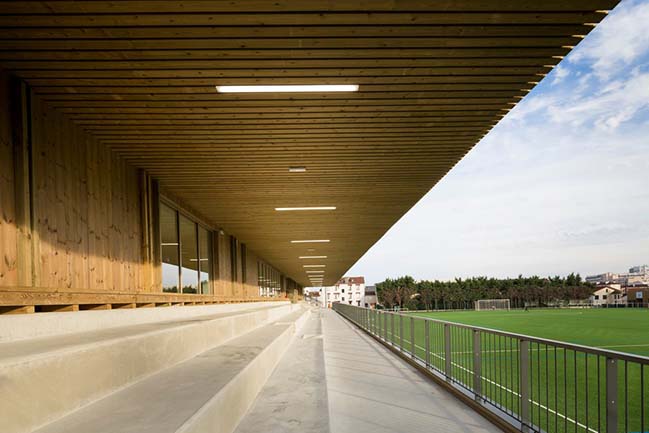 The sun deck has direct access from the swimming pool and on a level with the door to the pool. It faces directly south to take full advantage of the sun. A space for snacks is located closely nearby on the terrace outside the bar-cafeteria. 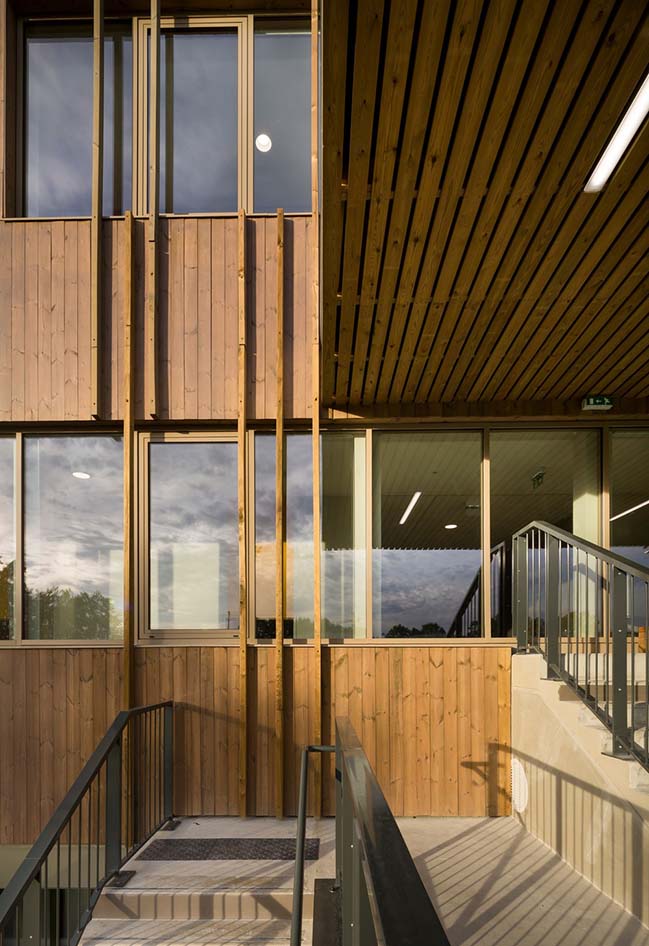 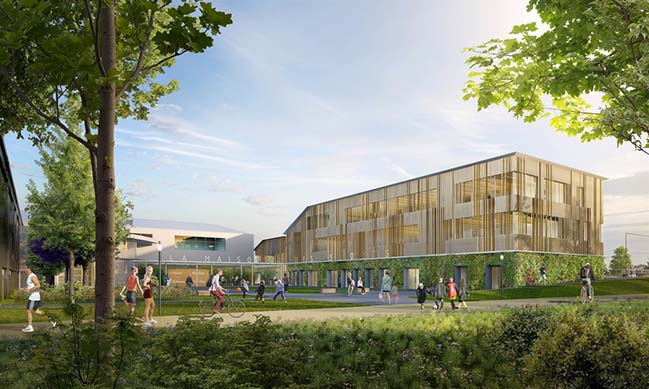 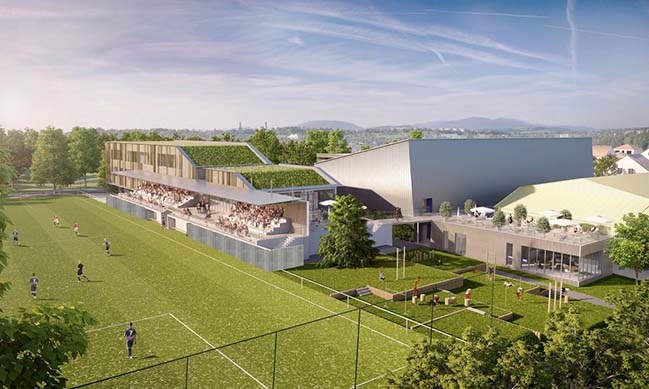 The House of Sports in Bezons by agence ENGASSER & associés

01 / 13 / 2018 As one consistent entity, the Sports Centre pulls together a large number of elements from different briefs, i.e. an already-existing gymnasium...