The Lighthouse by Juan Alberto Andrade

The Lighthouse turns on as a small-scale housing solution, a flexible one-person proposal in the center of Bahía de Caráquez, Ecuadorian coast, the highest seismic risk zone in Ecuador.

There are two ways of spreading light: being the source that irradiates it or the mirror that reflects it. 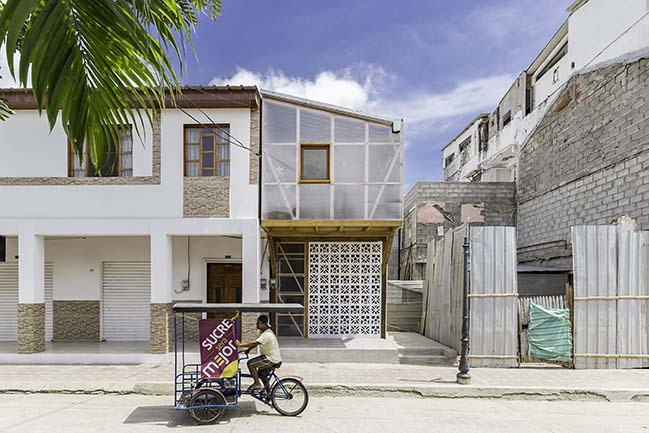 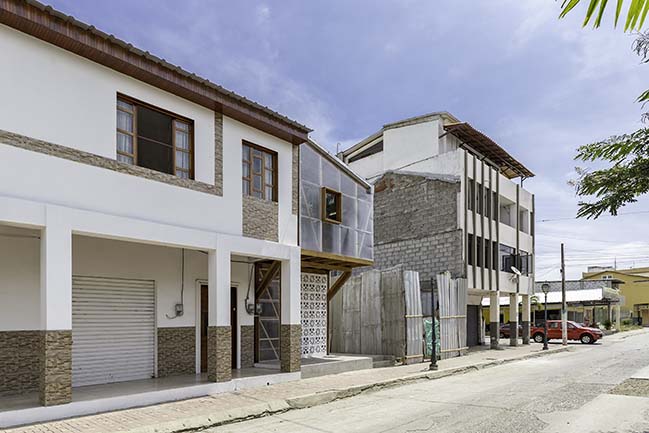 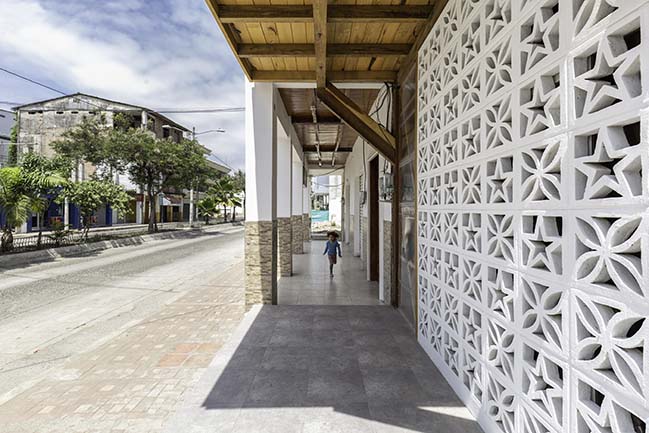 Background: Bahía de Caráquez is a small coastal city of approximately 20,000 inhabitants, which belongs to the Sucre county, Manabí province. Its tropical-humid temperature oscillates between 22 - 26 degrees Celsius. It's located in the northern section of the Ecuadorian coast, a region that is part of the Pacific fire belt and it’s characterized by the concentration of some of the most important subduction zones in the world, which causes intense seismic activity. In a 17 year period, Bahía de Caráquez registered two earthquakes of magnitude higher than 7 degrees; cataclysms that ended up demolishing more than 60% of the city. After the natural phenomenon of April 16th, 2016, hundreds of people were affected by the 7.8 earthquake that struck the north coast of Ecuador, including Cristina López de Guillem. 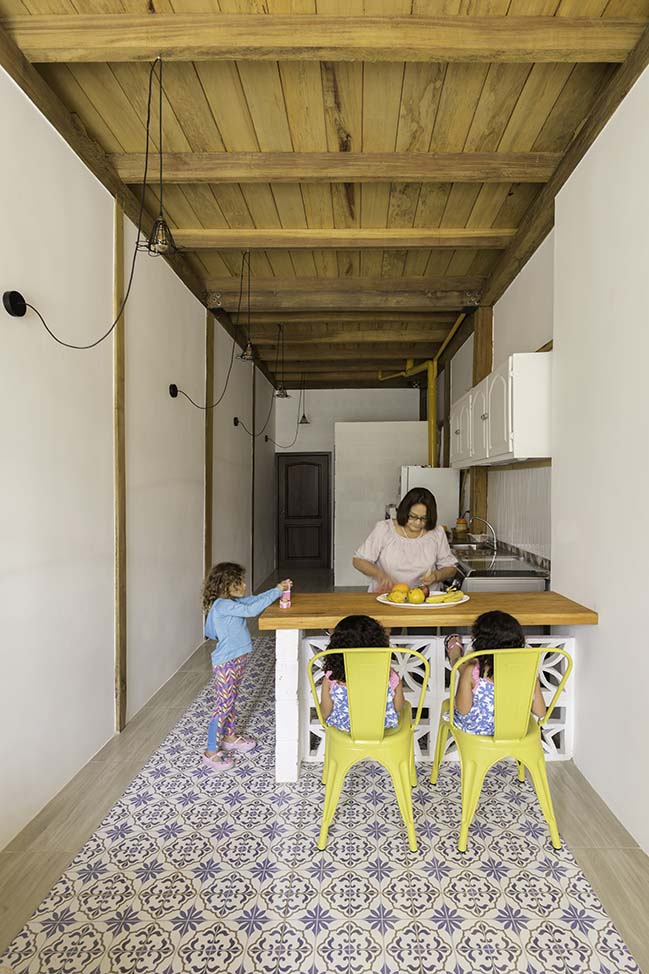 Cristina was already 79 years old and faced, perhaps, the most tough situation known to man: the problem of housing, the right of the few. Cristina lost her home and everything that it represented: this house was the center of her housing and commercial activities. Her economic income was based from the rent and the profits from the sale of clothing (house-commerce). She spent two years in Guayaquil, waiting to capitalize to start the adventure that awaited the process, an adventure that began with a very highlighted social-family problem. Her house-commerce property was a shared asset with his nephew. Both owners had different demands regarding the new interventions. After a long process of negotiation proposals, it was resolved to divide the irregular terrain into two portions of the same footage in the Ground Floor, and equal dimension in the façade, sharing a common staircase. 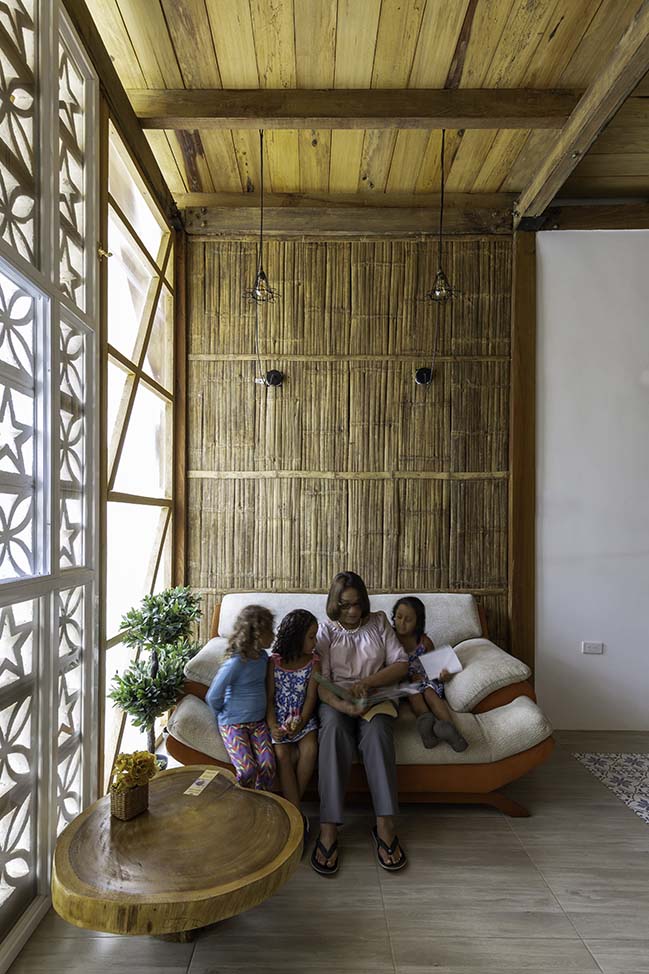 Housing morphology: With the blank canvas already defined, we are faced with a new terrain of form in form of -C-, with a front of 3.60m and 2.80m in its narrowest part. This new terrain maintains the same conditions as the general ground: backing on three sides, a single façade, heights determined by the municipality of the county and a non-existent language manual. Cristina has 46m2 per floor (two floors), which forces us to make decisions. The project was divided into two independent housing units, being the Ground Floor for the primary user and the Upper Floor to supplant the economic income for rent, lost in the earthquake. Both proposals are unipersonal, spaces to provide housing for a single person. 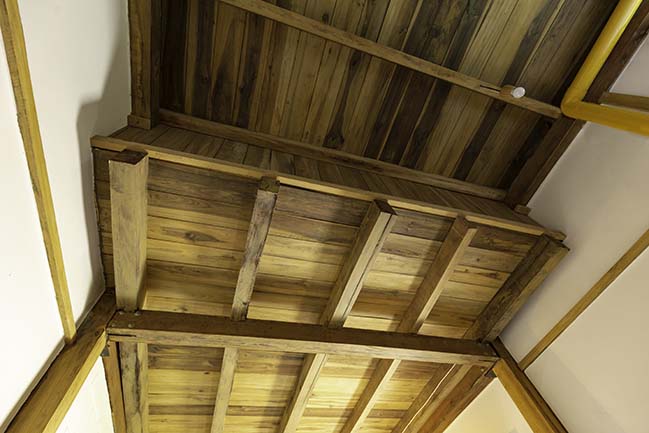 Program: Within each independent unit were located: Master Room, Master WC, Social WC, Kitchen, Dining Bar and Social Room. The open kitchen was worked as the pivot of each unit, placing it longitudinally in the narrowest part of each floor. A dining room bar was generated, which serves as an auxiliary to its small social room. On the ground floor, in particular, a secondary space was created within the only bedroom, as an emergent solution to the housing needs, which can serve as temporary (family) or permanent accommodation (assistance). 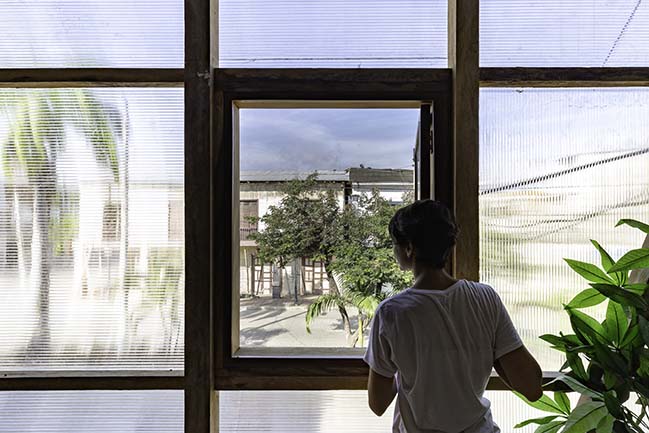 Interest in the materials that make up the built environment: As a main requirement, and an important part of the dissolution of the land, Cristina, as post-earthquake posture, wanted to avoid reinforced concrete, glass, and block masonry in its majority. The architectural project responds in a very strategic fashion to this situation: -Natural disasters do not exist, there are natural phenomena. Disasters are caused by man. 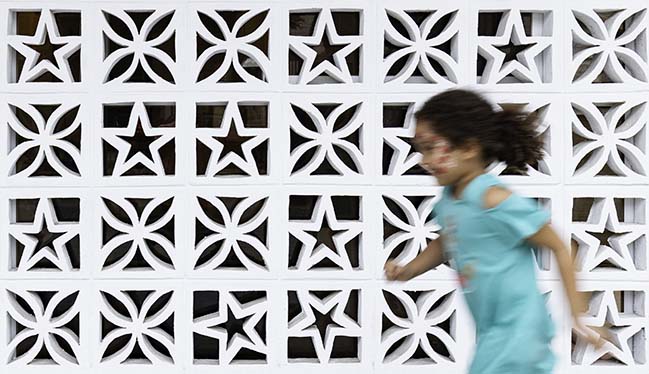 The resulting project is the integration of many overlapping variables as a starting point; an economically viable construction, accessible to those who, at almost 80 years old, try to build, from 0, their home. The initiative started from a process of physical and social development through the proposal of materials. The Lighthouse for its composition, manifests urban vernacular traditions, using materials usually associated with underdevelopment, being contextually conscious, expressing the correspondence between the appearance and structural nature of the project. 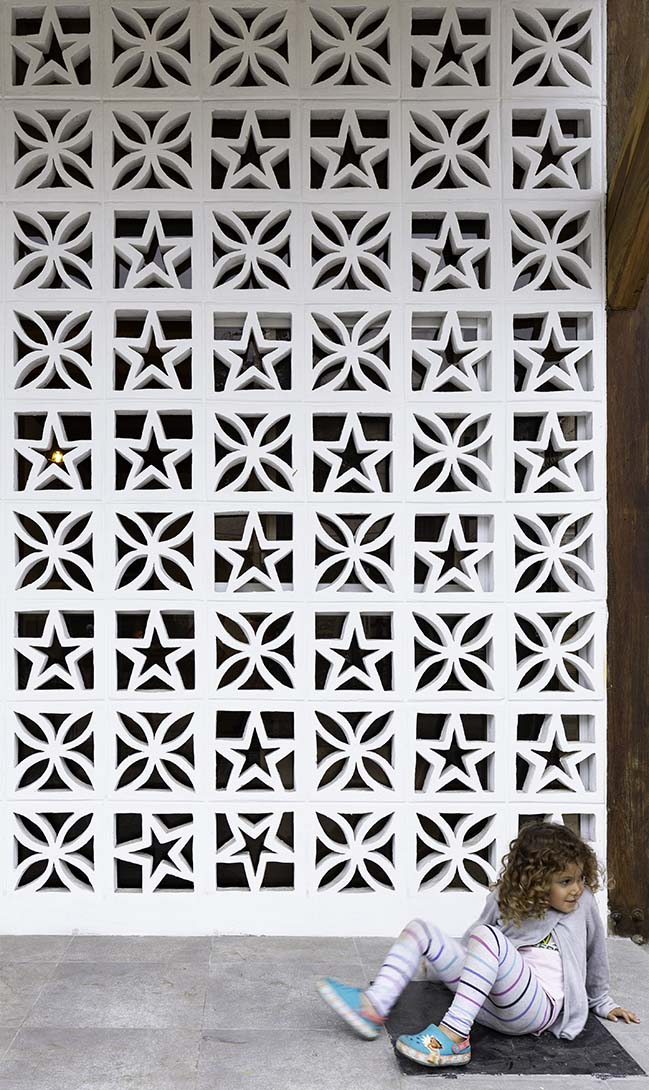 It becomes a means of local social transformation. To this purpose, a light and flexible arrangement of structural wood was implemented, combining Moral, Mangle, Asta and Maria, under metal plates used as a fastening system, and wooden slab with laurel planks and chopped cane - plastered as masonry. Being a construction proposed in wood, we seek to explore this material from its structural aspect, insulating, light and easy to build. In tropical areas such as Manabí, wood and guadua are synonyms of freshness, ecology and savings. The guadua in its natural state exceeds 12 meters in height. It’s found in large numbers in the mountainous areas of the province. The construction process involved a high percentage of materials from the area and 100% of local labor. The construction lasted almost 4 months, months in which new words had to be added to the dictionary and, above all, contrast the knowledge acquired with the local academicism to speed up the processes and their communication. We discovered that Columns are Struts, Beams are Bars, Joists are Strings, Deck Beams are Keys, and walls are Linings: A whole new alphabet. 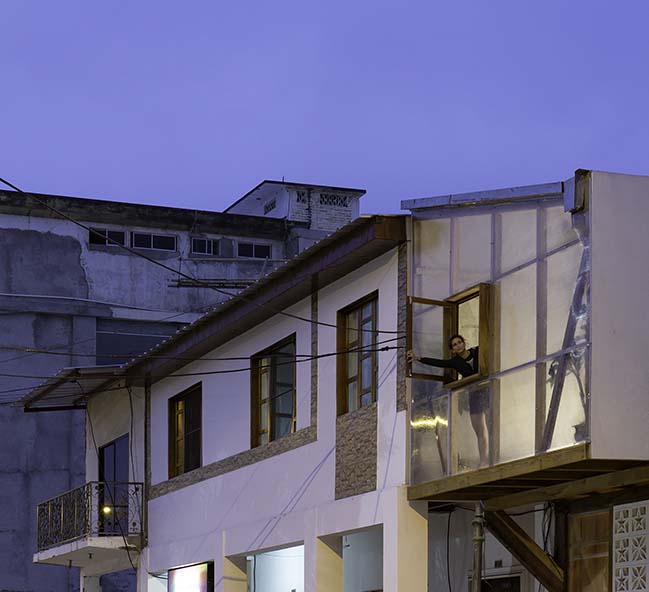 Explore implications: Architectural object as molding and adaptation of its environment. The housing units are designed to correspond the climatic conditions of the area; this includes the circulation of natural air and the penetration of natural light, reinterpreting the traditional architecture of the area, highlighting its main elements. 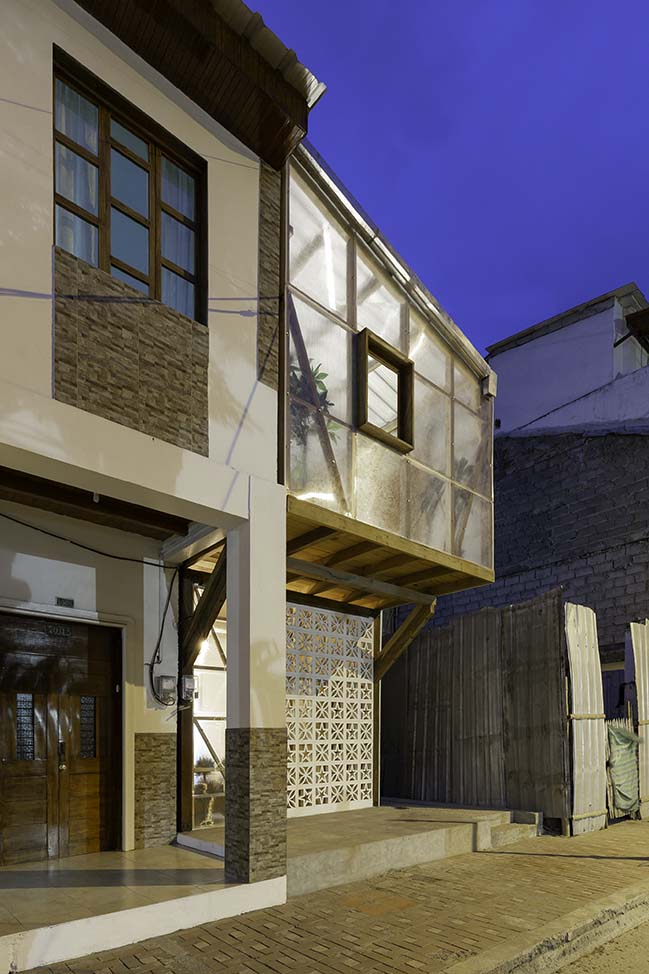 The opening of its single façade, fragmented by an exterior gallery, facing a wide street, allows us to incorporate the natural and built environment to the houses. To this end, it was worked to be used as a buffer zone that promotes, under safety regulations, the relationship between the interior and the exterior with the main street of the city. It was created then, in its single facade, a dynamic and permeable, which promotes the entry of wind and light into its interior spaces; through an ornamental wall with traditional blocks on the ground floor, which works as a barrier and separates the interior with the exterior gallery, and re-interprets a new architectural form. And with the intention of promoting lightness, in the upper floor we worked with polycarbonate, a lightweight, non-sharp plastic material, divided into modulated panels.

A screen was created that allows the diffusion of light in both directions. The polycarbonate, structure and wooden floors carry a message much deeper than the lightness and light permeability, they constitute a plastic reference that represents a form of relationship with its urban environment through an invitation embodied in the material itself, a way to generate community. 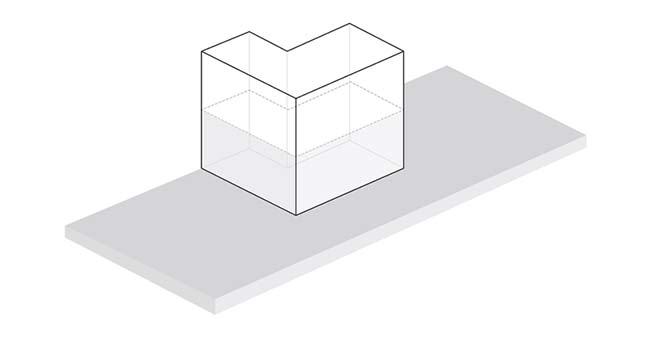 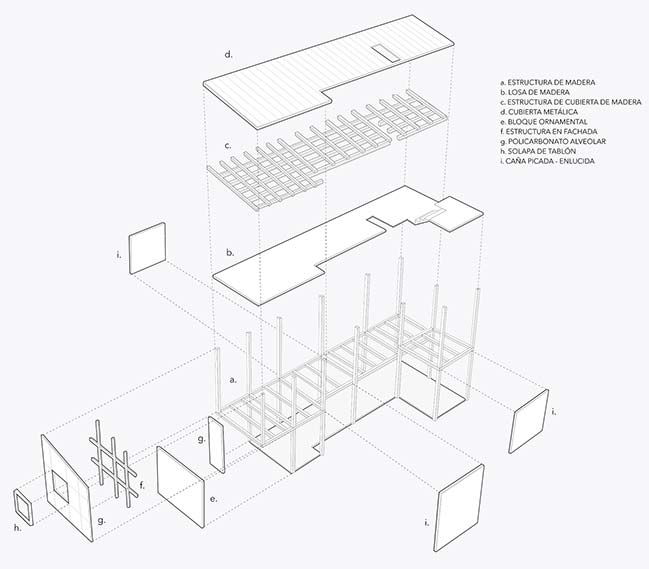 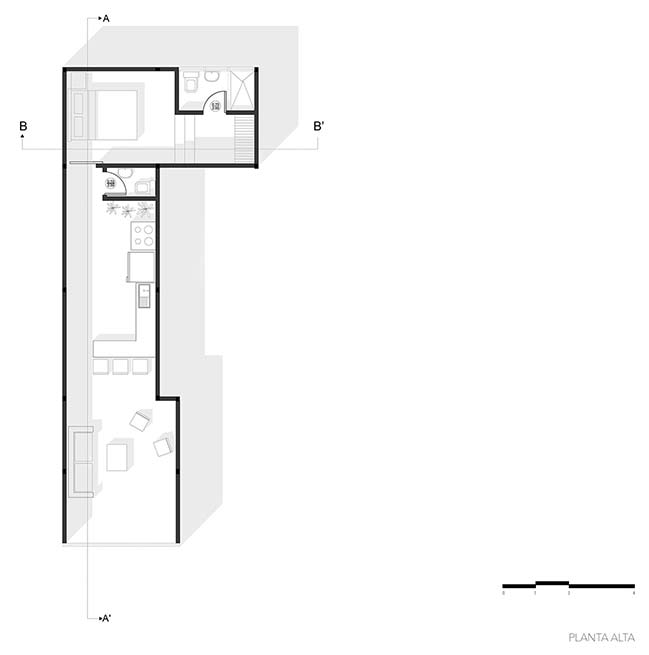 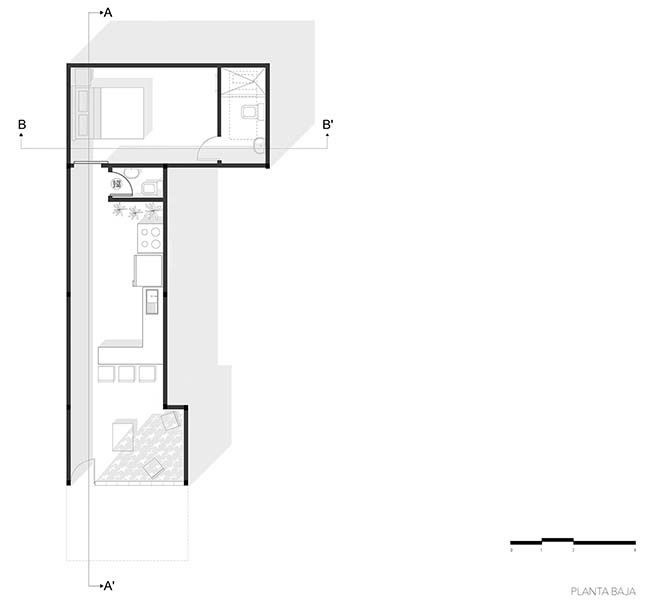 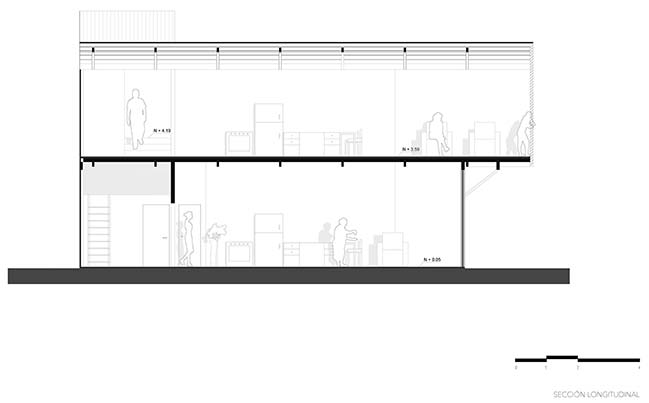 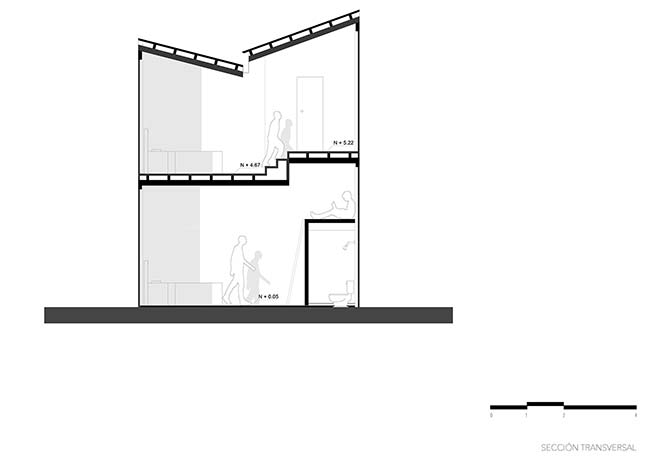 The Lighthouse by Juan Alberto Andrade

08 / 23 / 2018 The Lighthouse turns on as a small-scale housing solution, a flexible one-person proposal in the center of Bahía de Caráquez, Ecuadorian coast