Napur Architect was commissioned to create a Masterplan for the whole brownfield area, in they framed the area into a chessboard-like matrix of cultural-, commercial-, green-, leisure and sport functional blocks. 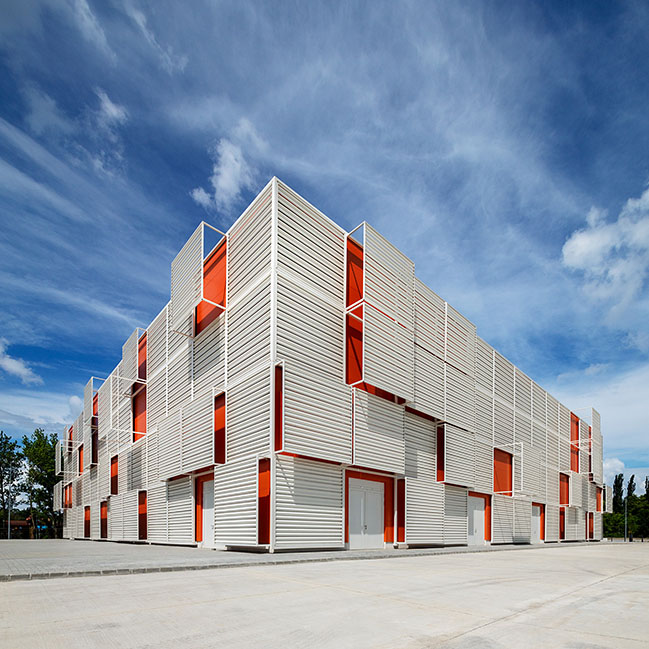 From the architect: Thoughts and lines assembled into a system - or quite the opposite: disintegrated structure bursted by inner impulses, that is held together by its own gravity? Either solution we choose, the new Hatvan Handball Hall designed by Architects Marcel Ferencz and György Détári is standing in front of us as a moment captured during a course of a process. 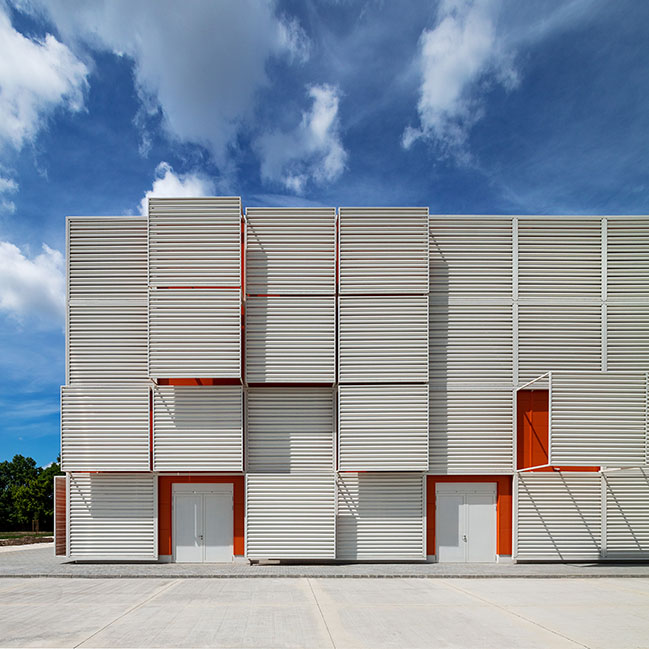 The concept of the building becomes clear if we read and interpret it in the space and timescale of the city. Thinking about development of a new sport venue and its role in the industrial brownfield between Óhatvan and Újhatvan – between the old and new district of the city - began in 2012.

As an assignment by Frigyes Philipp - the Principal Architect in Charge of the Region - the designers of Napur Architect were commissioned to create a Masterplan for the whole brownfield area, in they framed the area into a chessboard-like matrix of cultural-, commercial-, green-, leisure and sport functional blocks. 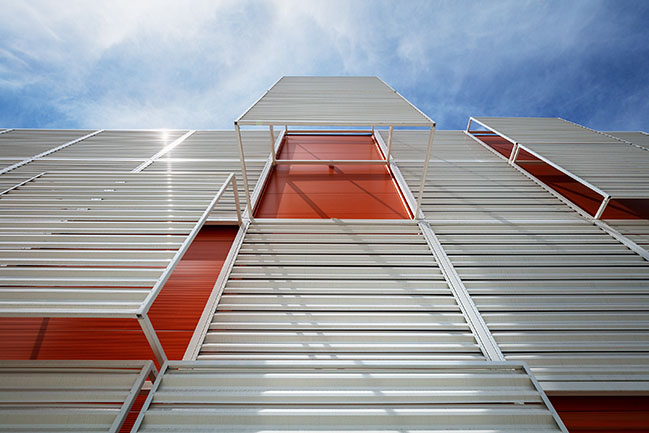 This was a long-term and complex strategy dealing with infrastructural, urbanistic, and civic design problems, outlining a new zone between the two districts, that is not anymore dividing, but connecting the two – old and new - parts of the city. 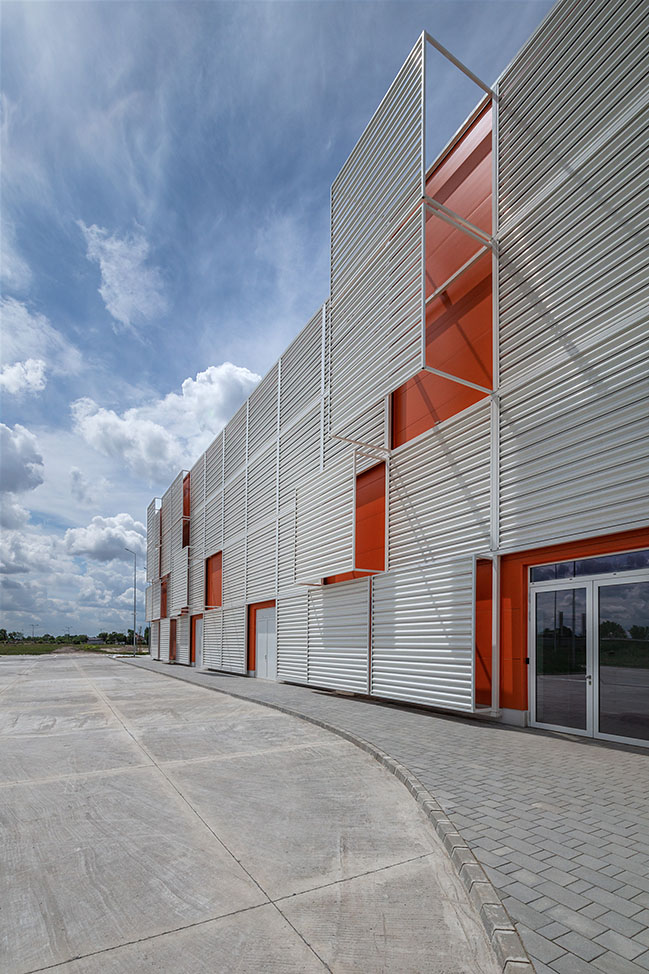 Part of this large new urban system as an element the Architects designed the Handball Hall first. After its concept in the theoretical space the view of the Architects turned to a vision of a building what manifested itself as a „dynamic still”. 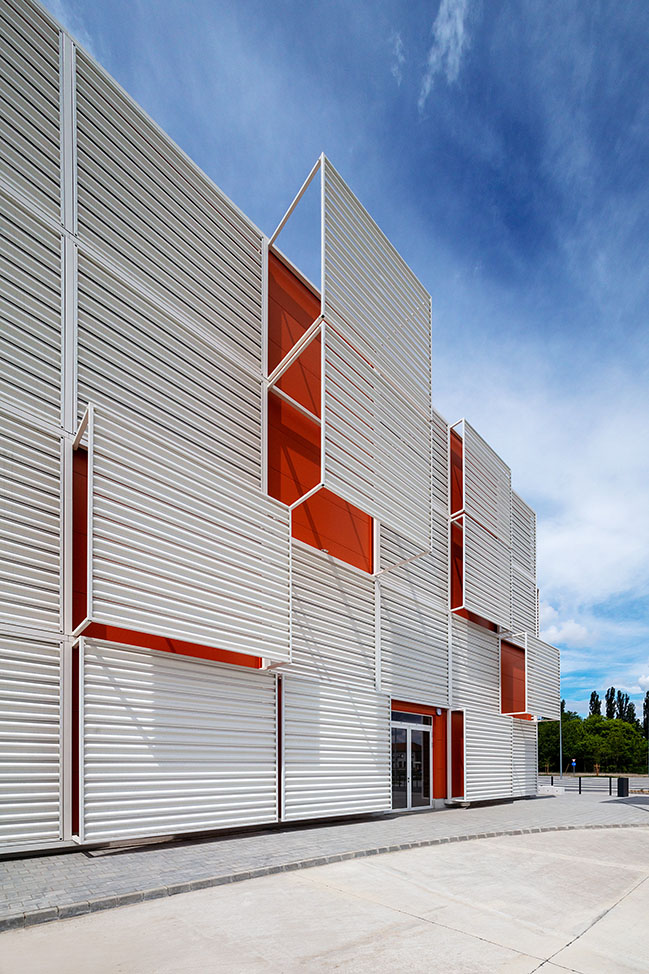 In Hatvan solutions had to be rational and feasible. In its neighbourhood standing hundred-year-old industrial buildings, next to those the new sport venue planted as a new layer with features of contemporary industrial architecture.

The double layer of the façade meant to ease the tension between the urban situation and the industrial character of the building. The thermal shell and the primary structural frame of the building is presented as a simple hall. Its openings are following the functions, its construction and operation is simple and efficient. Its bright red colour is representing the fire of movement, energy of competitions and sport events. 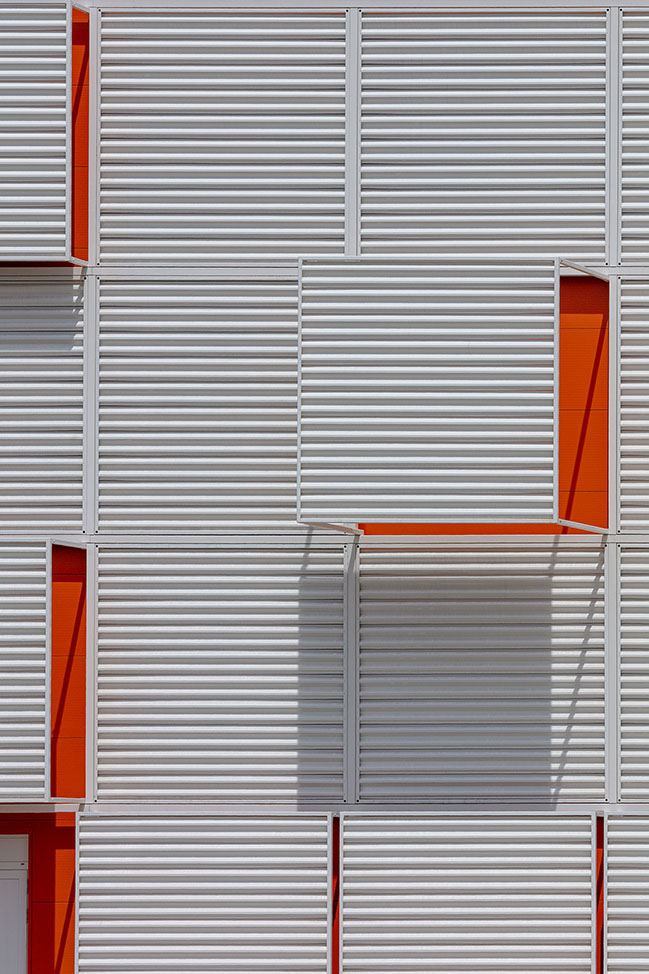 The secondary layer is serving as contrast, the network of hollow section frames. It is holding the corrugated sheet panels in front of itself as off-the-plane displaced shields, those rarefy and densify like pixels, pushing the limits and boundaries of the simple cube. In between the same elements are serving as shades and to emphasise entrances. 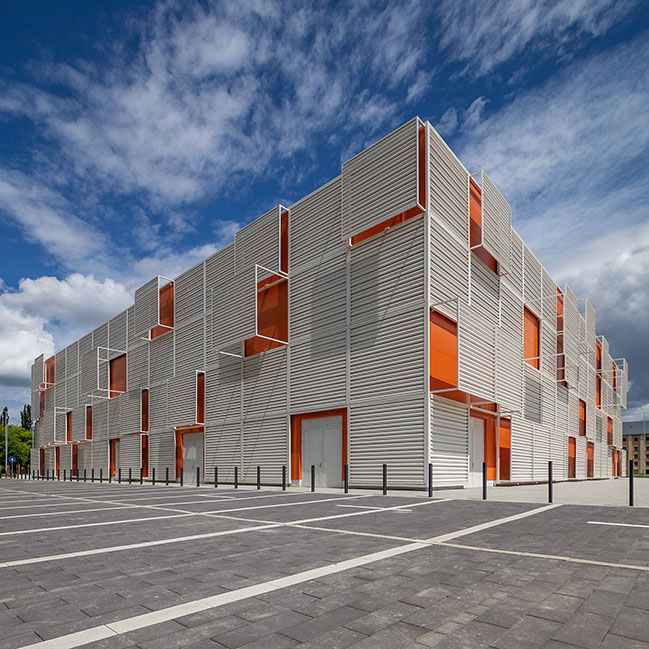 Their colour is white: the colour of perfection and possibilities, but it can be a reminder to pure, clean, and fair game. Their spatial dislocation can become particularly exciting when lit at night, the building is glowing through the slits of its armour, as the lava is glowing through the cracks of tectonic plates.

To those who can see the building from the window, travelling on the train flying through the bridge laying on the east-west axis of the city, this means the warm light of home: a reference point, a landmark what is built into the identity of the city. 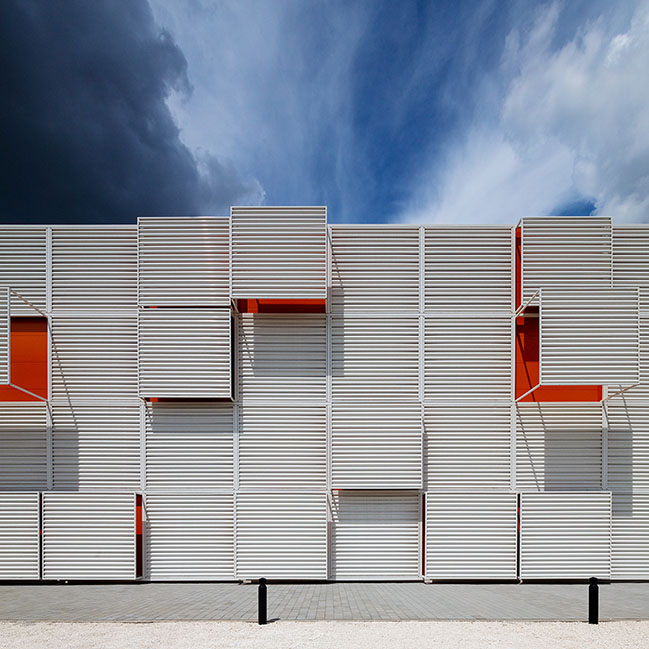 During the design process of the plan the Architects followed a simple and functional formula. The visitor is welcomed by a wide atrium, with the essential infrastructure of hospitality and vertical movement. The service functions of the building are placed on the upper levels in three large blocks. On the other side of their masses they are gathering the attached stands of the venue hall as well, leaving two aisleways for movement between sectors. 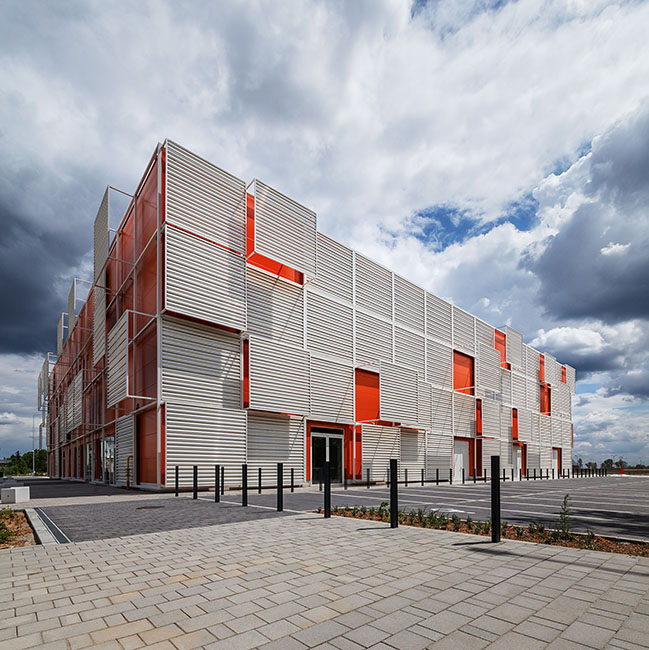 While the layout of the building is strictly organised, the playfulness of the external envelope is continued in the interior easing up the simple character of the hall. On the suspended ceiling of the atrium the rectangular structure is repeated with white, red, blue, and glowing fields – as a Mondrian-quote. Just as the externals, the internal panels are not assembled into one opaque surface, even the secondary steel structure of suspension is marking the plane of the ceiling, between the coloured panels the mechanical fittings are appearing naked: the internal structure is just as transparent as the armature of the external envelope. The blue colour in the atrium is reappearing on the field of play. The white-orange pair of colours what is outside in the green surroundings quite noticeable, inside is returning reorganized, as the neutrality of the concrete is revitalized by the contrast of red and blue. 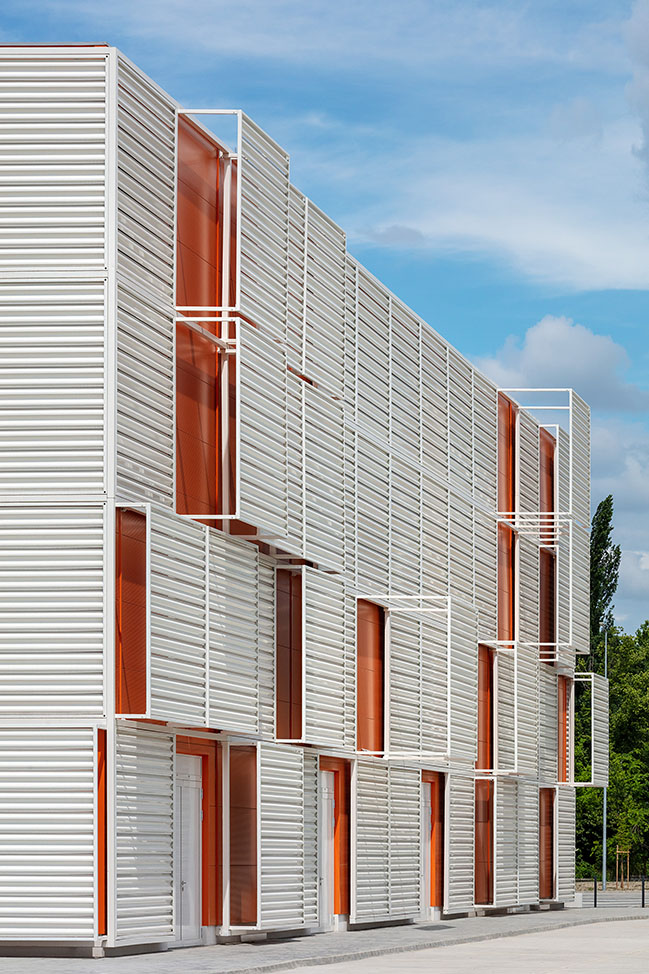 The question is still open about whether the masterplan will be realised, or the sport venue will remain the only manifestation of the grandiose vision and the rearrangement of the environment will follow an alternative path? Either way the theory and its solutions applied through the design of the building will remain actual anyway. 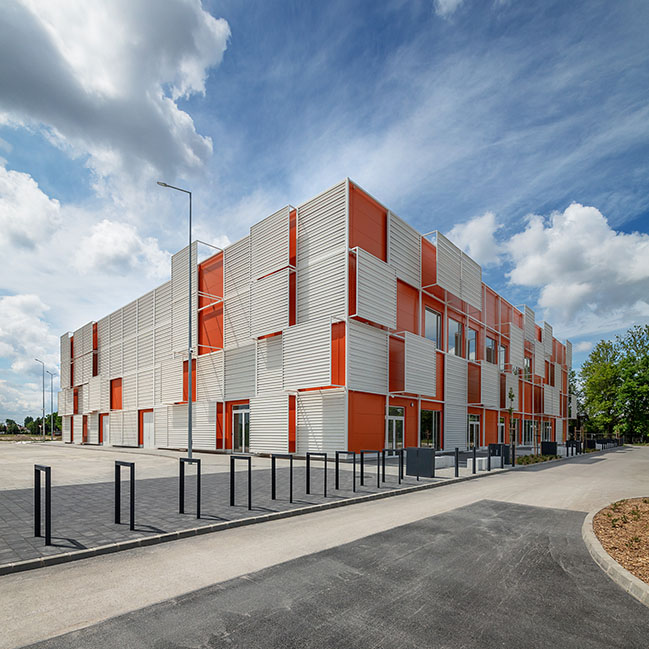 In conclusion the chessboard-like matrix arrangement moving through from the urban scale concept down to interior design details, the ever-new layers of ideas in historical setup could give a unique experience for the visitors what is rarely re-constructable.

One thing we can be sure of: if it is up to the designers of the Hatvan Handball Hall, the ball will never remain still in the centre circle. 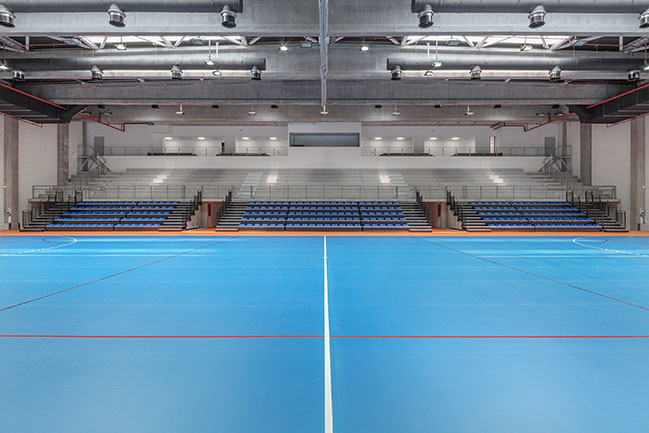 YOU MAY ALSO LIKE: Museum of Ethnography by NAPUR Architect Ltd. 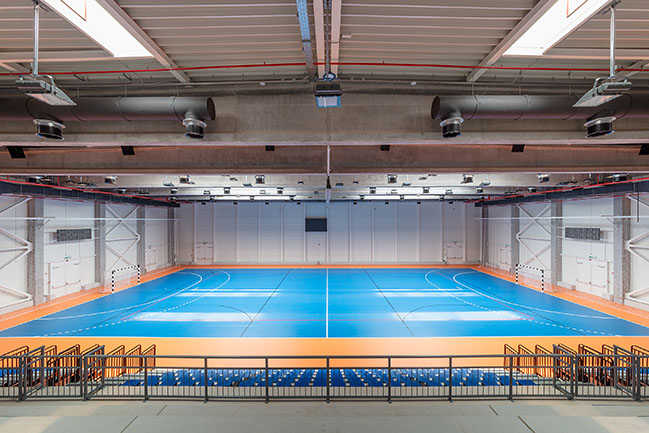 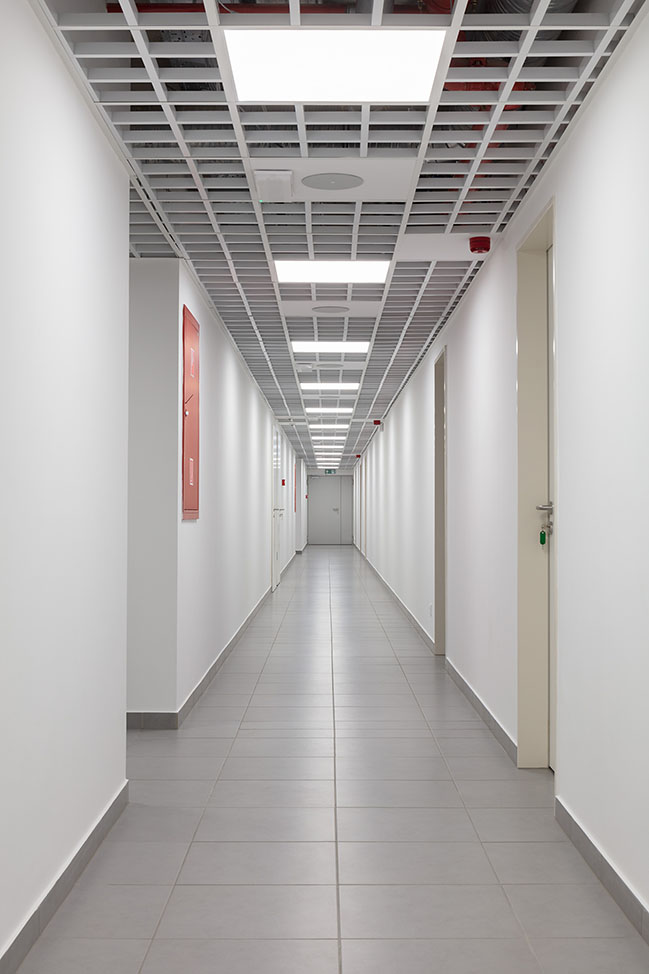 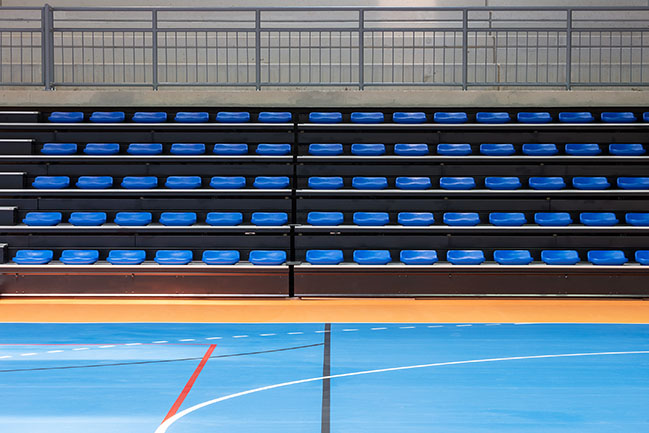 YOU MAY ALSO LIKE: New multi-purpose hall by KM 429 architettura 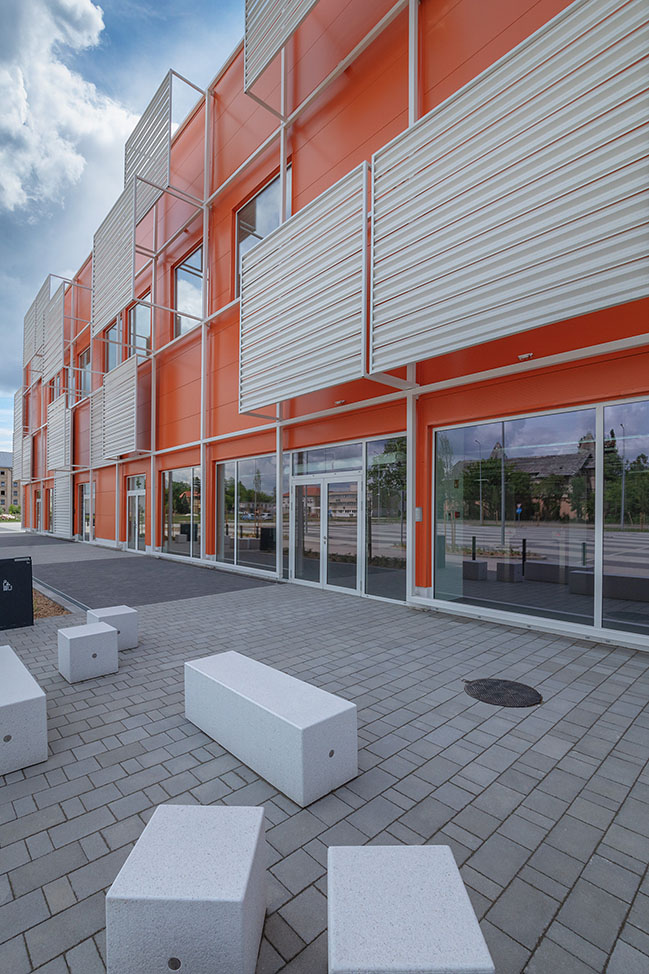 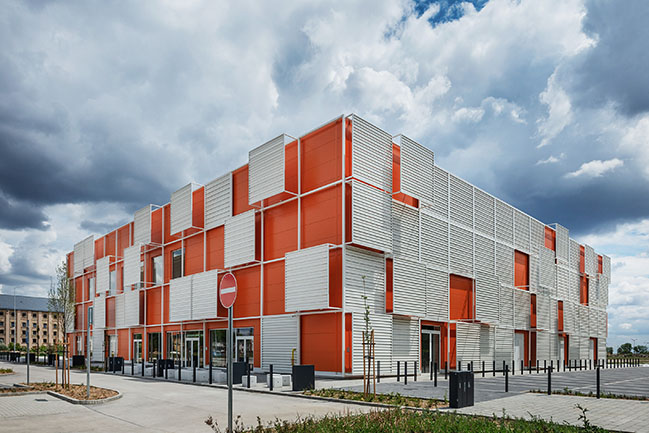 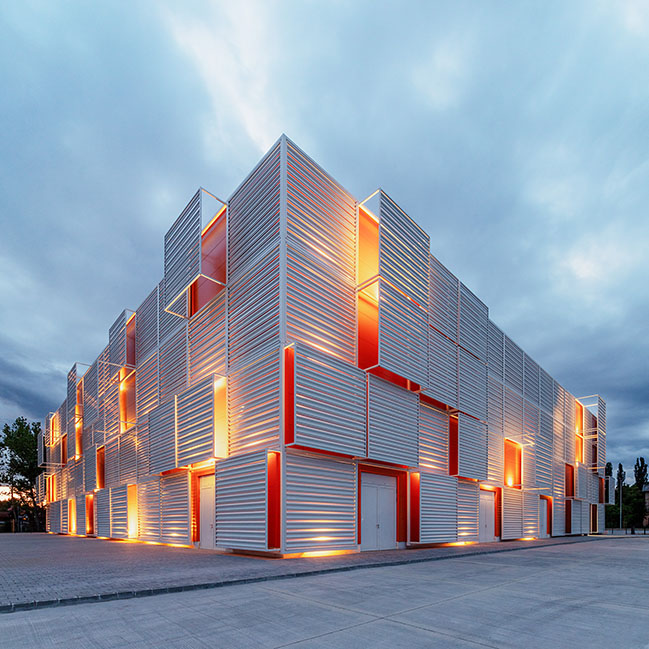 YOU MAY ALSO LIKE: Le Vaud Polyvalent Hall by LOCALARCHITECTURE 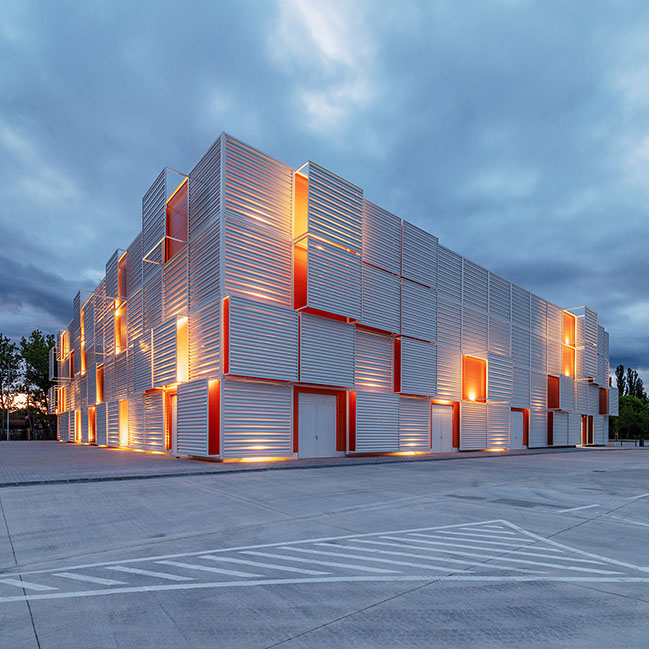 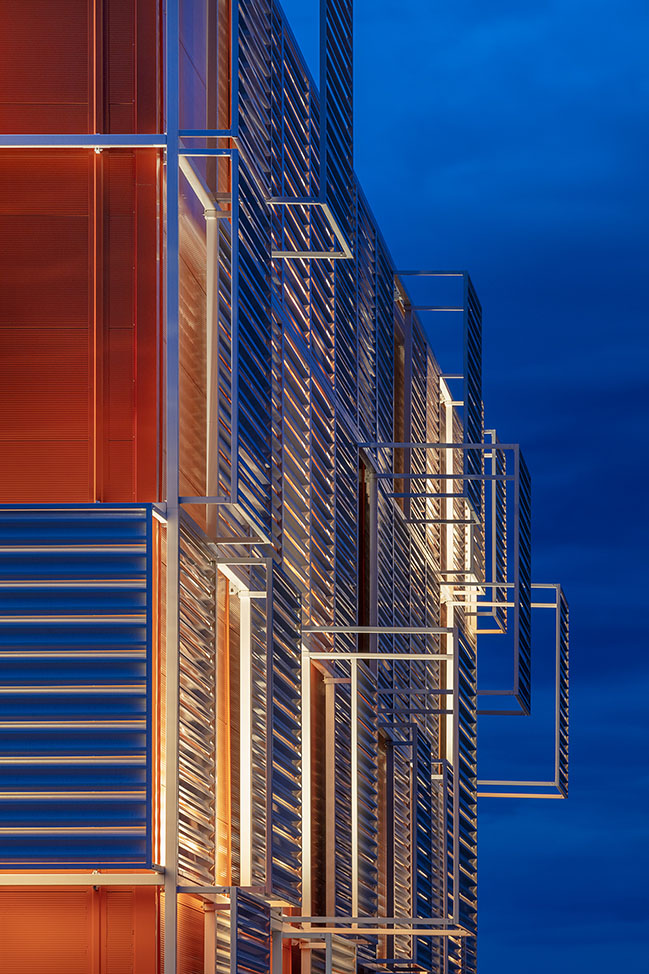 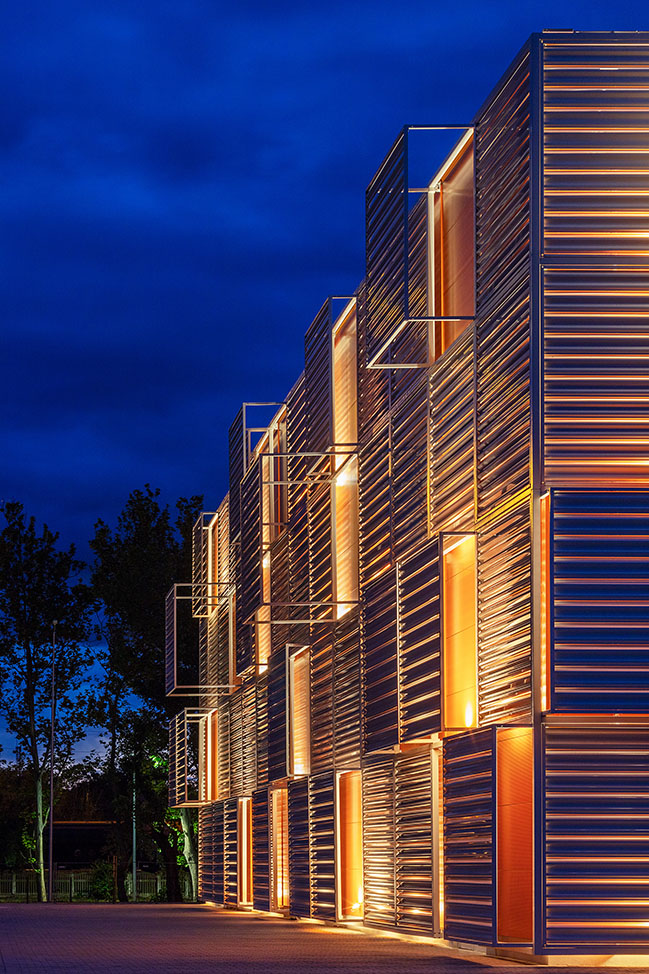 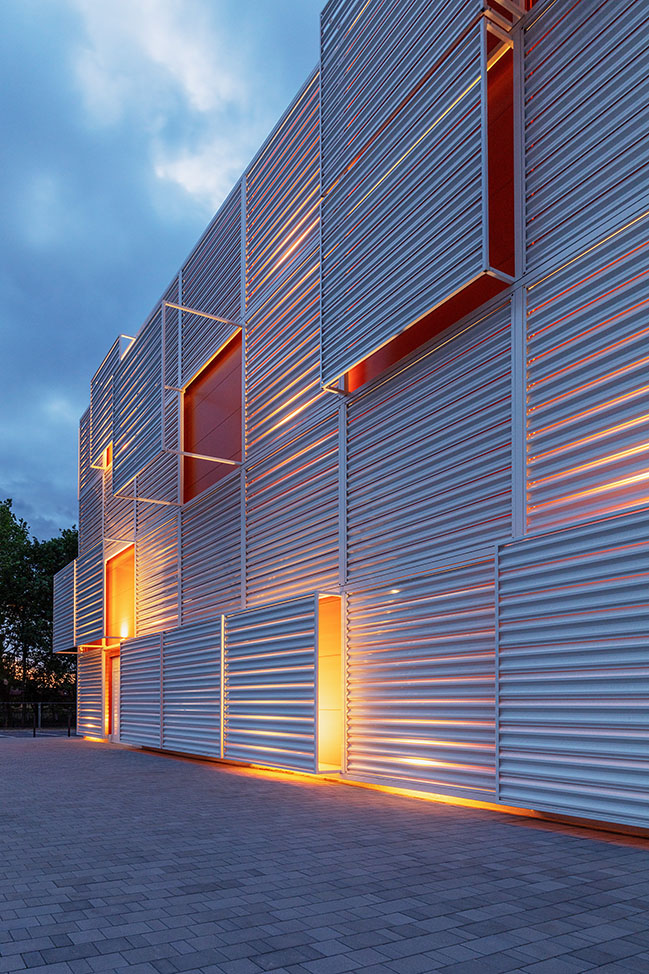 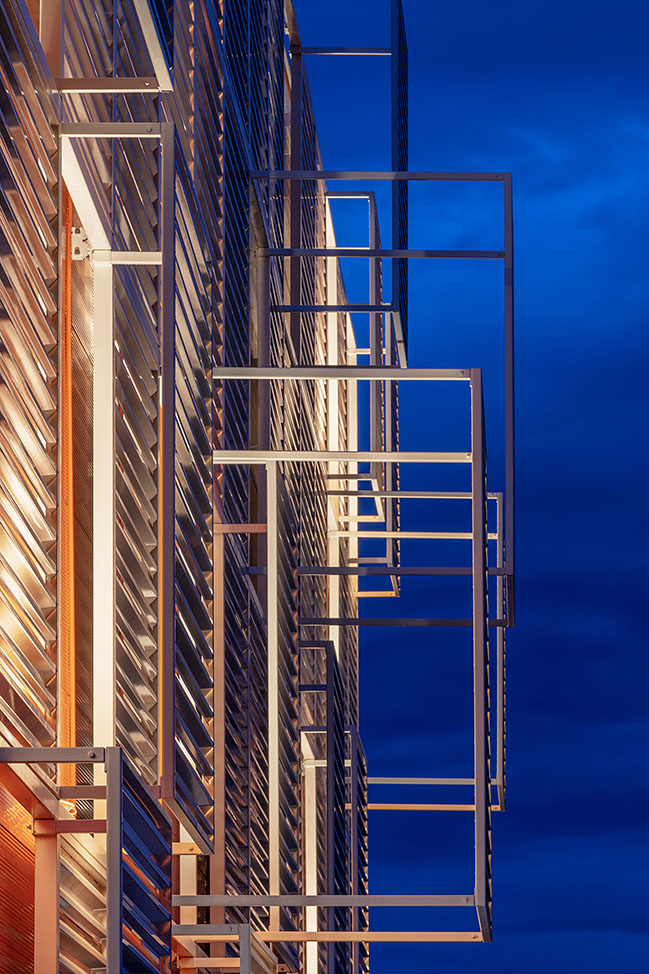 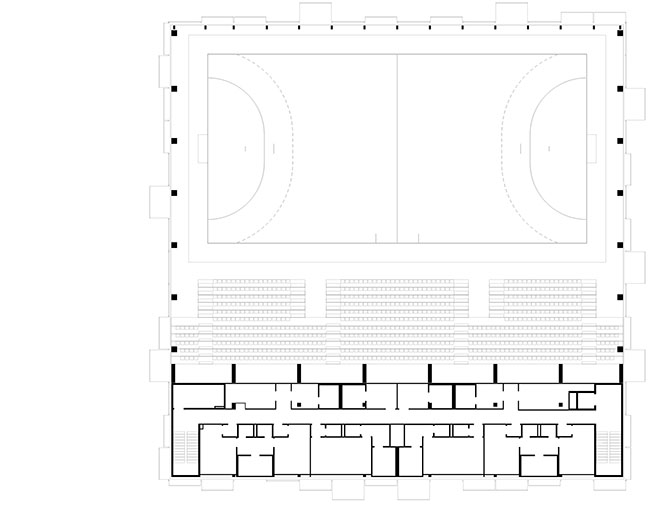 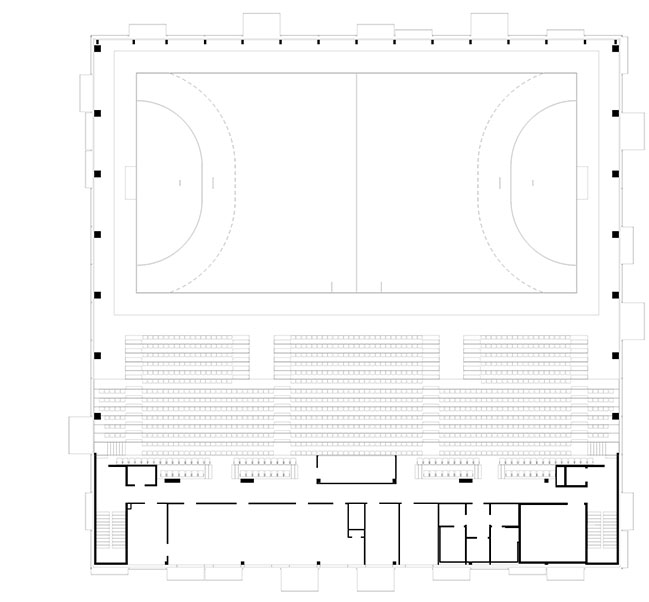 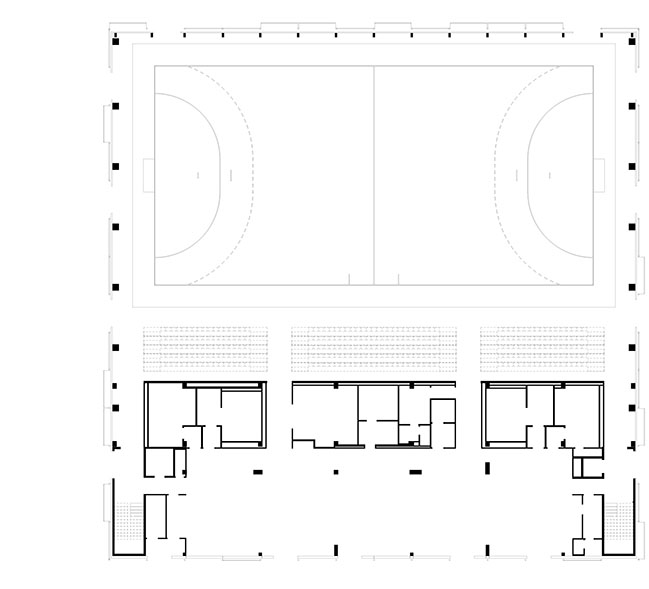 10 / 15 / 2020 Napur Architect was commissioned to create a Masterplan for the whole brownfield area, in they framed the area into a chessboard-like matrix of cultural-, commercial-, green-, leisure and sport functional blocks... 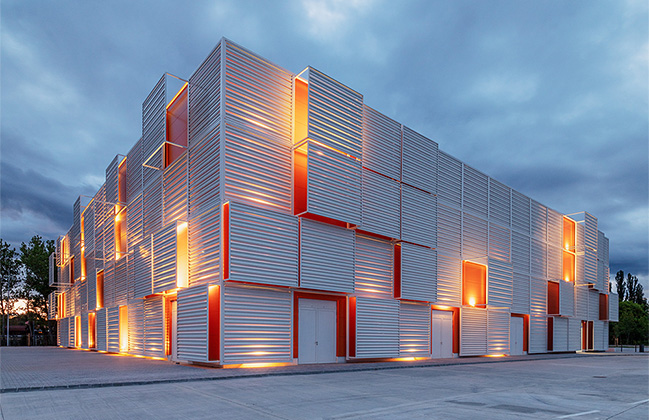