Belatchew presented Stockholm Loop - is an effective catalyst for 120,000 new homes and its residents' needs in terms of work, housing, distribution, trade and sport. 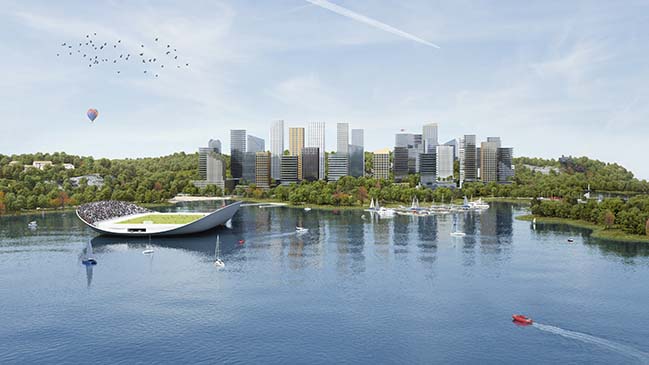 According to Swedish government agency Statistics Sweden, 700,000 new homes will be needed over the next ten years in Sweden.

The task for Belatchew Labs was to seek the answer to the question of how metropolitan regions can be developed in order to contribute to the solution to the housing crisis without establishing new cities and avoiding costly infrastructural initiatives, and instead applying existing resources more efficient and sustainable.

Stockholm is a center-oriented city, where the metro network starts from the center without the possibility to change trains elsewhere than in the city center. As a consequence, the outskirts of the city are depopulated daytime and connections between the existing neighborhoods in these places are weak. 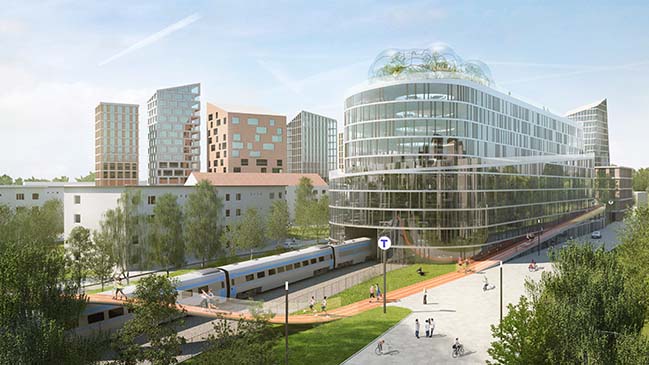 Belatchew Labs’ strategy is based on “Transit Oriented Development” (TOD) (definition of TOD at the end of this press release) and the fact that there are under-utilized locations at the outer edges of the subway lines, which can be densified and activated by establishing new homes and other functions at under-utilized existing stations. By upgrading existing infrastructure instead of building new, a sustainable solution of the housing issue is created, where sleepy outlying areas are activated and made attractive for more hours during the day.

However, in order to achieve this, a number of challenges needed to be solved. To begin with, a bridging of physical barriers in the form of open water, railway tracks and motorways must be achieved. Belatchew Labs’ solution for breaking these barriers is based on the introduction of a new high density neighborhood typology and the creation of new types of buildings, such as an updated station building, a transport hub and bridge houses over motorways, railways and open water. These buildings create identity for the different new neighborhoods with the potential to counter the city's depopulation daytime through innovative programs for both housing, workplaces, distribution, trade, culture and, not least, sports. Sports also create ties between people over social barriers, while simultaneously retargeting the spotlights from the center to the periphery. 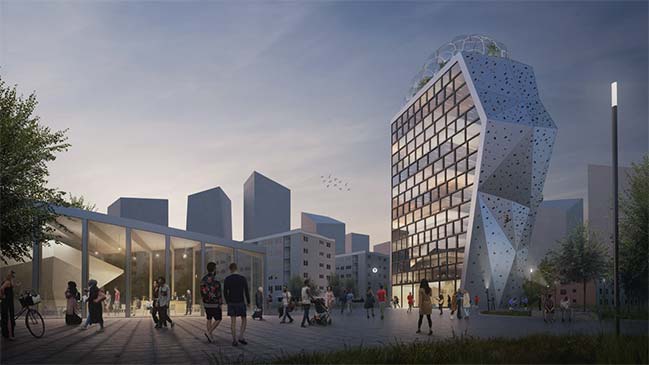 Belatchew Labs’ implementation of the TOD strategy in Metropolitan Stockholm is the Stockholm Loop concept - an effective catalyst for more than 120,000 new homes and its residents needs of housing, distribution, trade and sport. Stockholm Loop comprises the establishment of new urban development ares around twelve existing stations within a radius of ¼ to ½ mile (400 to 800 m) from each station which in total utilizes more than 400 hectares (4 000 000 m2 or appx. 1000 acres) of previously unused land.

In order to illustrate the above strategy, Belatchew Labs designed a number of buildings - station houses in Bergshamra and Gubbängen, as well as bridge houses in Masmo and Huddinge. 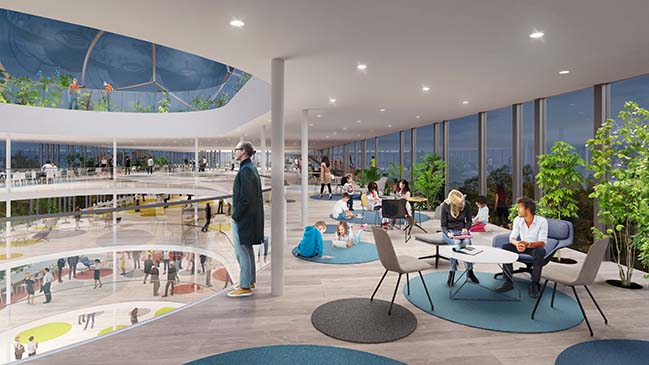 One way to give these outlying areas a common identity could be the establishment of an annual sporting event that fuses all the nodes in Stockholm Loop through a race that includes swimming, cycling and running. The route in total constitutes appx 40 miles (64 km) - which comprises about 1.5 marathon runs - a Stockholm Loop indeed. In addition to positive health effects that result from sports, Stockholm Loop will also retarget interest from the city center towards the outskirts.

"The key strengths of Stockholm Loop are the creation of more than 120,000 new homes, the sustainable use of existing infrastructure, and increased social sustainability through activated outlying areas and community-creating sports initiatives," says Rahel Belachew, CEO and Principal Architect Belatchew Arkitekter.

"We are now calling on all actors in the region at municipal, county council and state level - as well as private actors - to find solutions to the housing situation in Stockholm together, while creating lively outlying areas without building entirely new cities," concludes Rahel Belatchew. 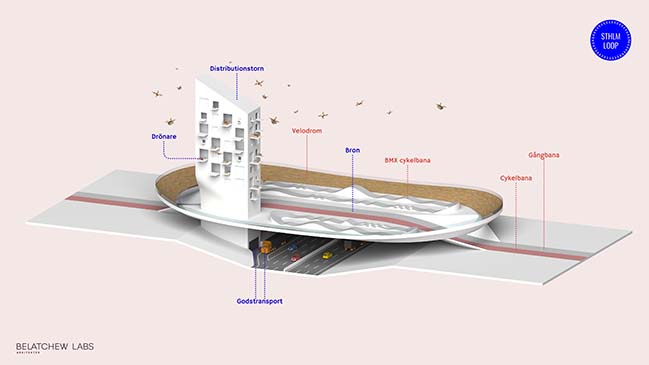 1. There is an acute shortage of housing in Sweden as more than 700,000 new homes need to be built during the coming 10 years.

2. Stockholm Loop proposes more than 120,000 new homes in twelve underutilized locations at the outer edges of the Stockholm metro system.

3. Stockholm Loop builds on the use and upgrade of existing infrastructure.

5. The creation of new types of buildings: an updated station building, a transport hub and a bridge house. Four examples of these buildings have been designed.

7. Transport hubs include transhipment of goods as well as distribution of e-commerce deliveries with the help of drones.

8. Outlying areas are activated and are made attractive during more hours of the day.

9. The establishment of resources for different types of sports at the twelve sites create identity and links between people across social barriers while providing positive health effects.

10. An annual sports race – the Stockholm Loop – with swimming, cycling and running, comprising about 1.5 marathon, which retargets the spotlight from the center to the periphery. 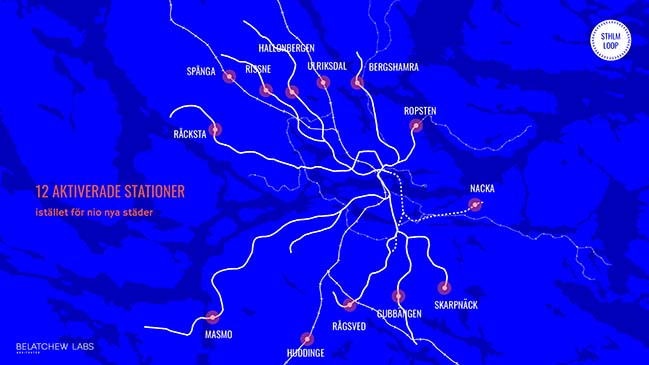 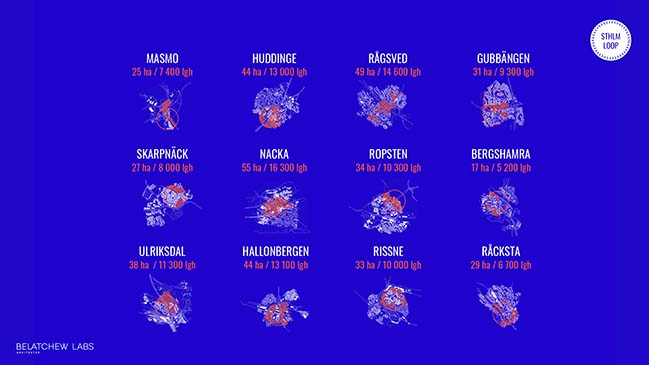 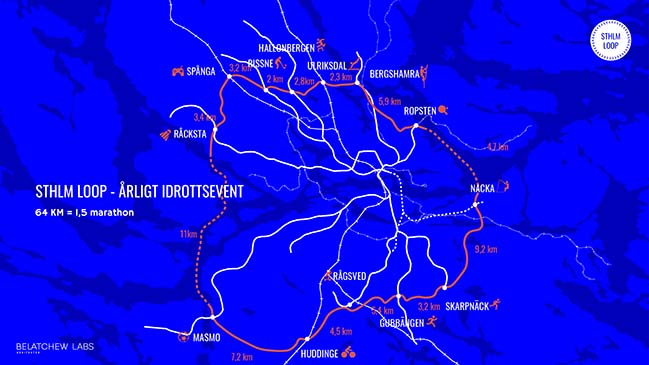 09 / 17 / 2018 Stockholm Loop is an effective catalyst for 120,000 new homes and its residents needs in terms of work, housing, distribution, trade and sport 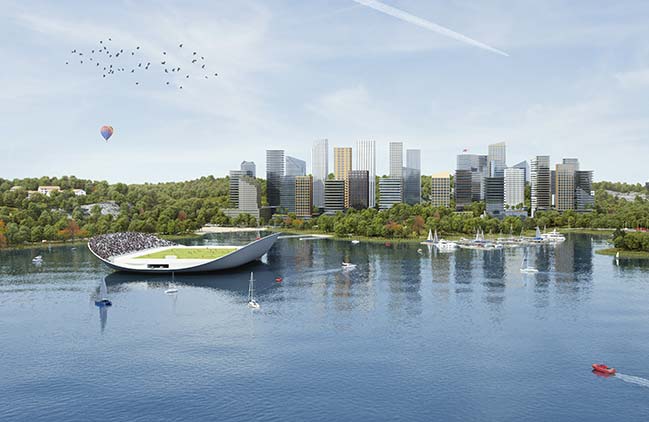