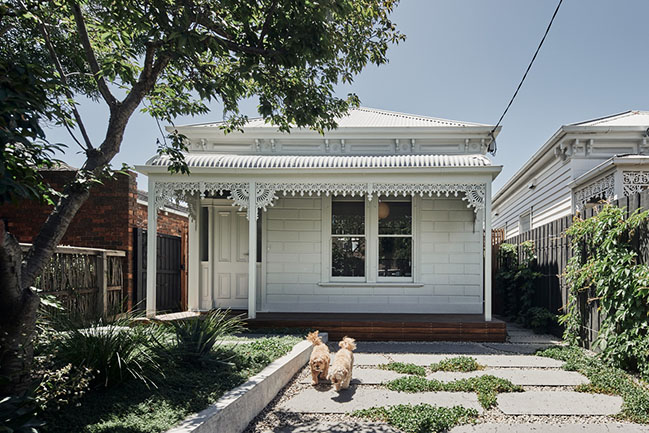 From the architect: The Ripple House is a series of unfurling spaces defined by subtle shifts in the site and light. Discreetly positioned behind a single-fronted Victorian façade, the addition reinvents the previously disconnected floorplan, creating a highly adaptable family home connected to its garden. The architecture develops a narrative around reverberation and progression, drawing on the ‘ripple’ notion to explore deft forms that mediate the descent of the site’s gentle fall and associated impact on the interior. 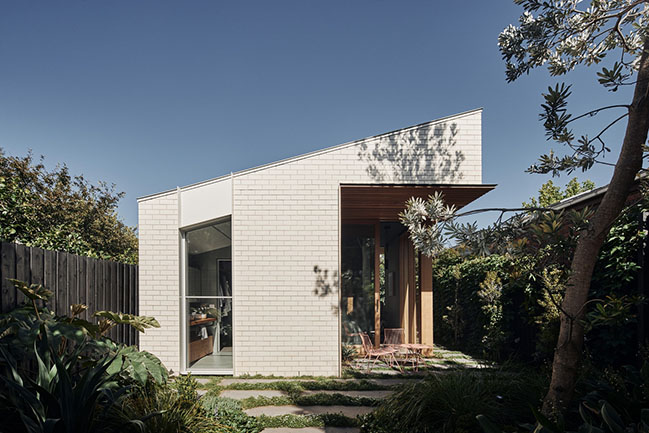 The traditional sequence of bedrooms is maintained as a study and guest room, while the bathroom is thoughtfully re-worked. The junction of old and new is marked by a change in floor level and finish – from timber to concrete, with a lowered ceiling saturated in deep green. Kitchen cabinetry is recessive with crisp white finishes, juxtaposed with sculptural ply forms. The island bench has broad proportions with forms responding to the rippling ceiling, creating an intuitive gathering area for informal entertaining. 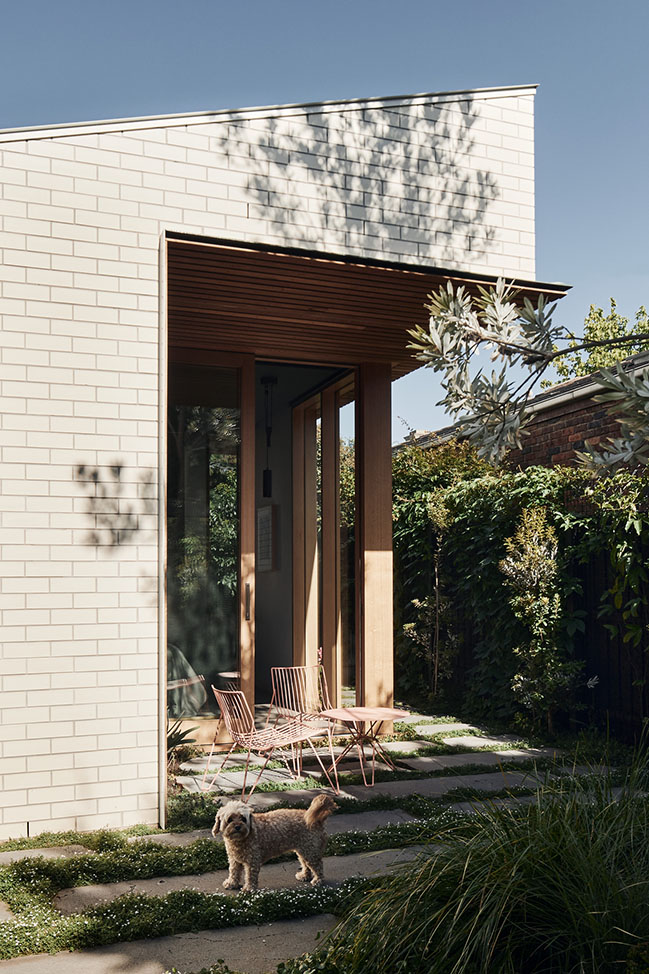 Beyond, a striking rippled ceiling in silver-top ash defines the principal volume of the new extension. Folded forms crank to capture northern light above the neighbouring brick boundary wall, while raking low along the southern boundary to allow neighbours the same privilege. Junctions were meticulously detailed to achieve a restrained sensibility. A ‘springing point’ anchors the ceiling arrangement, with a triangular skylight drawing in morning light and creating strong definition between dining and lounge volumes. 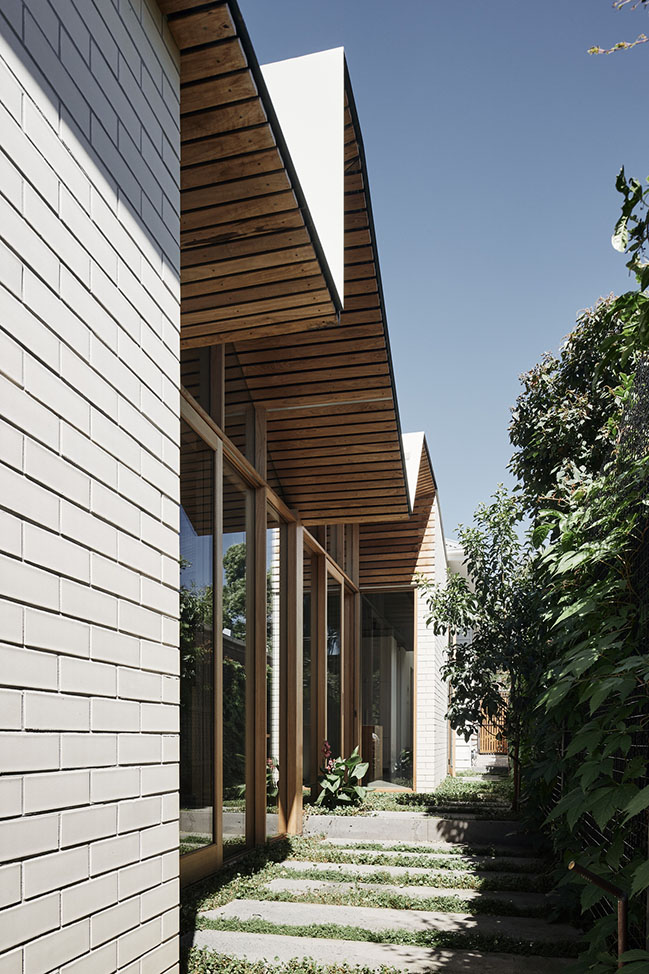 An angular ply unit sits in sculptural dialogue below, housing utilities in a refined and elegant gesture, reinforcing the definition between spaces while maintaining visual connections. Operable glazing unites the living room with a narrow, stepped garden along the northern edge, extending the interior footprint to give a sense of scale and generosity. The rippled timber ceiling projects along this spine, creating an inverted pathway in the sky. 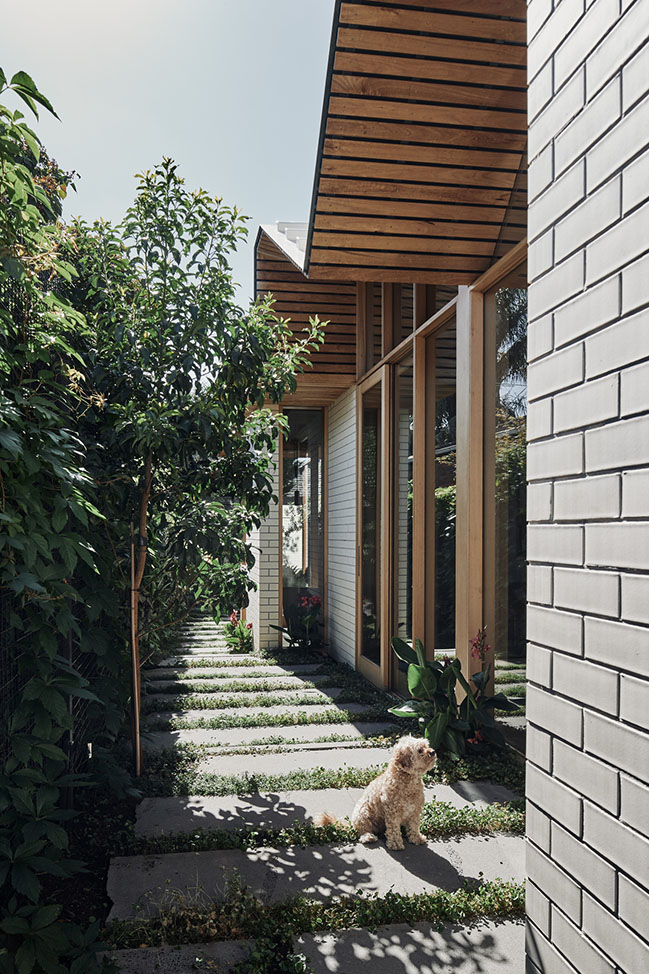 A wide sliding door opens to the main bedroom, offering views through to the eastern garden. Here, a mirrored shed reflects the lush textures of the stepped garden and rippled ceiling, appearing to span the full length of the site. When the sliding door is closed, the experience of the master bedroom becomes intimate and secluded. A walk-through robe leads to a tactile ensuite finished in eucalypt tiling, responding to the natural and calming tones of nature, washed in morning light. 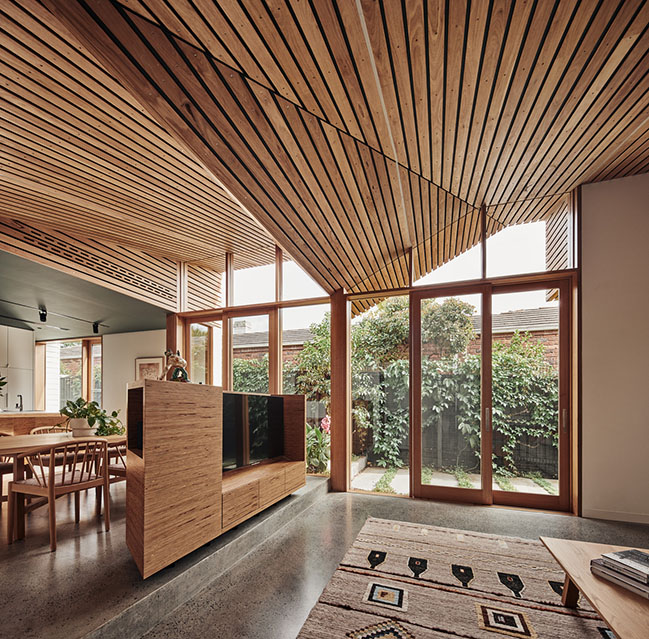 Ripple House is designed around the core tenets of sustainable building practice. The concrete slab provides effective thermal mass by absorbing northern sun, while the canopies offer shade to the interior in the hotter months. The walls and ceiling are highly insulated, while windows are double-glazed, effectively controlling thermal and acoustic performance. Natural and locally sourced materials are favoured, including silver top ash, ply, laminate, timber and brick. 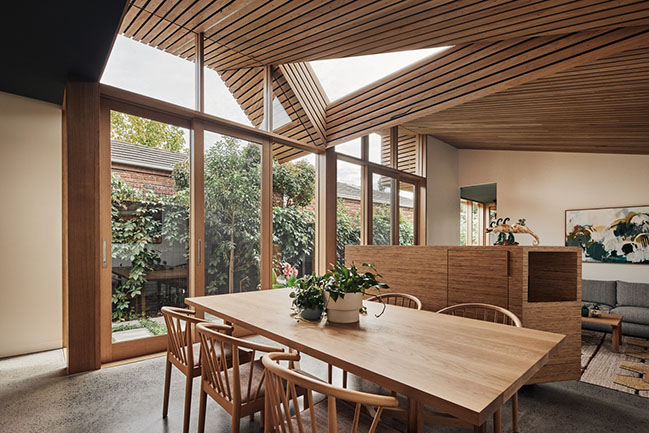 Furniture is Australian designed and made, while interspersed with vintage pieces. The rippled ceiling combines energy-conscious LED strips, animating the geometry with lines of light, transforming the impact of the ceiling between day and night. The house expresses a continual play between pragmatics and the creative reverberations between light and site. 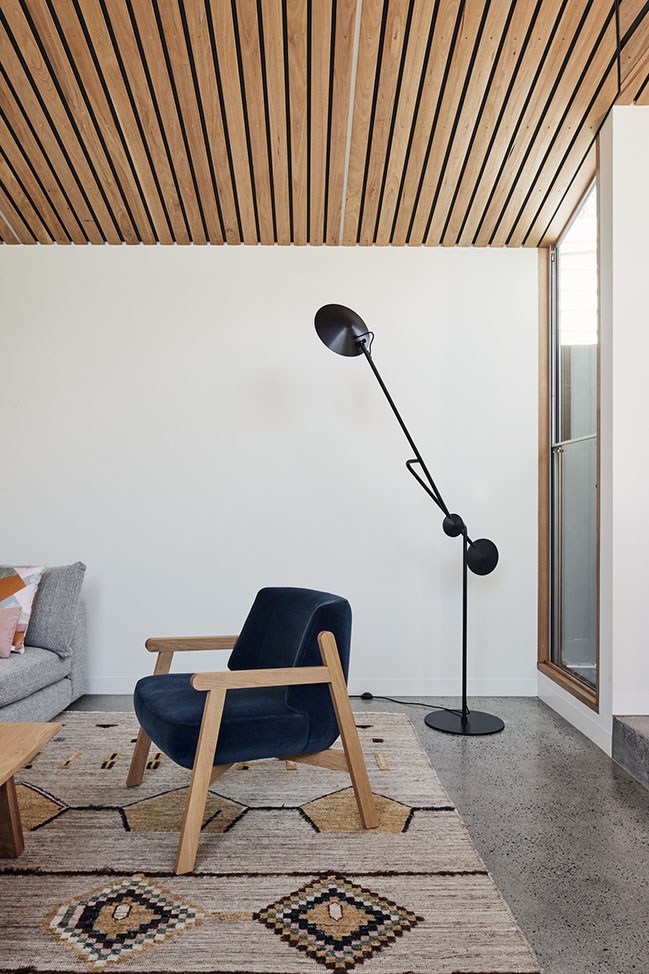 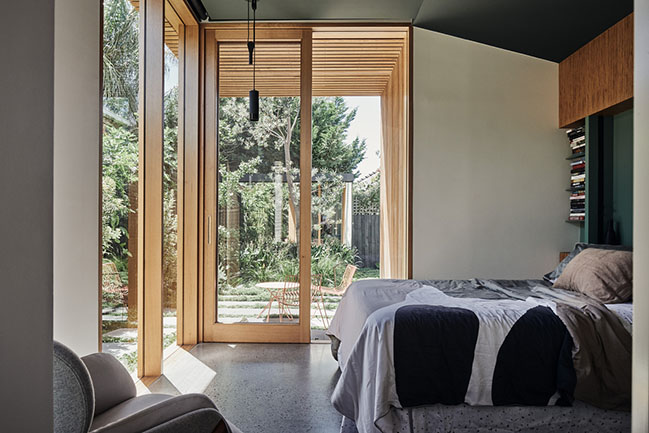 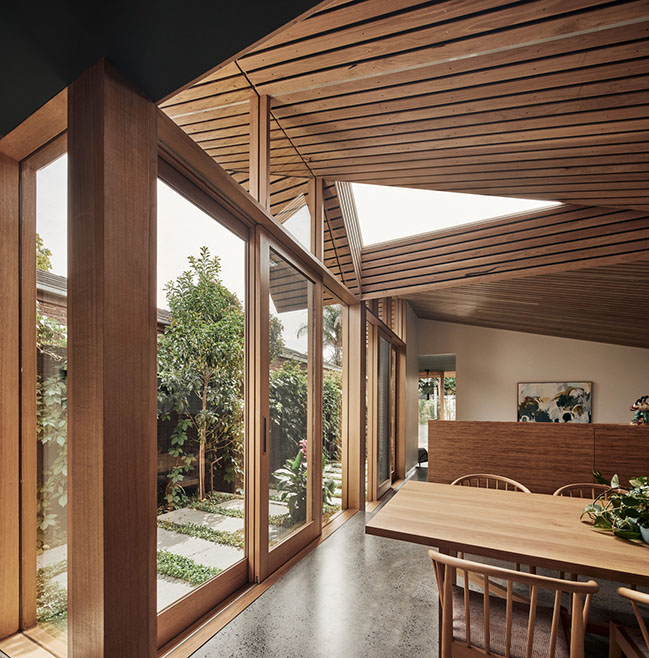 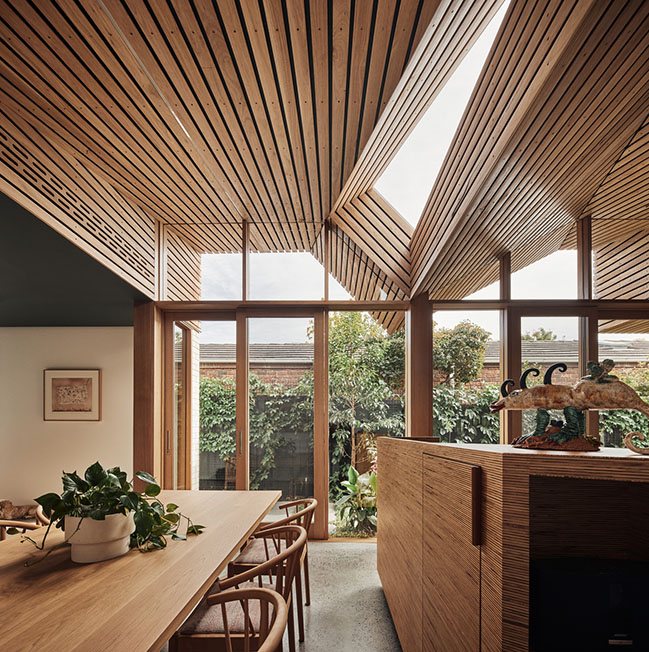 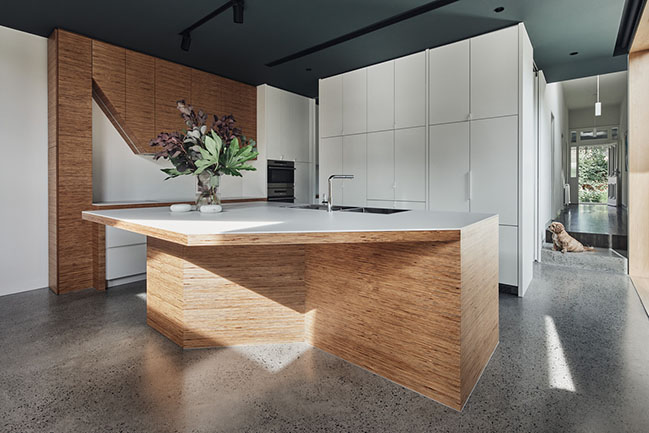 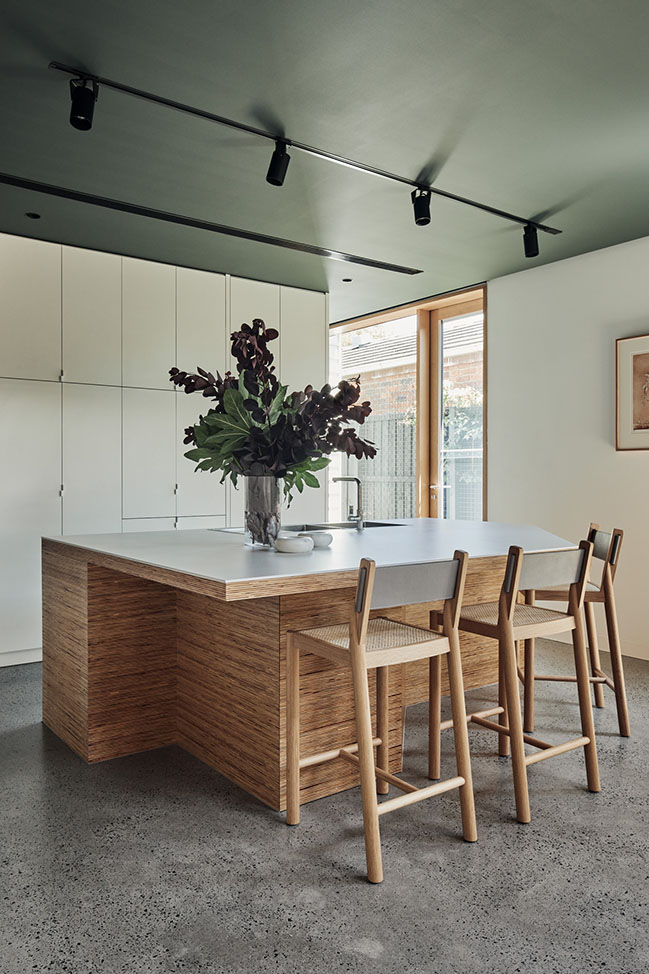 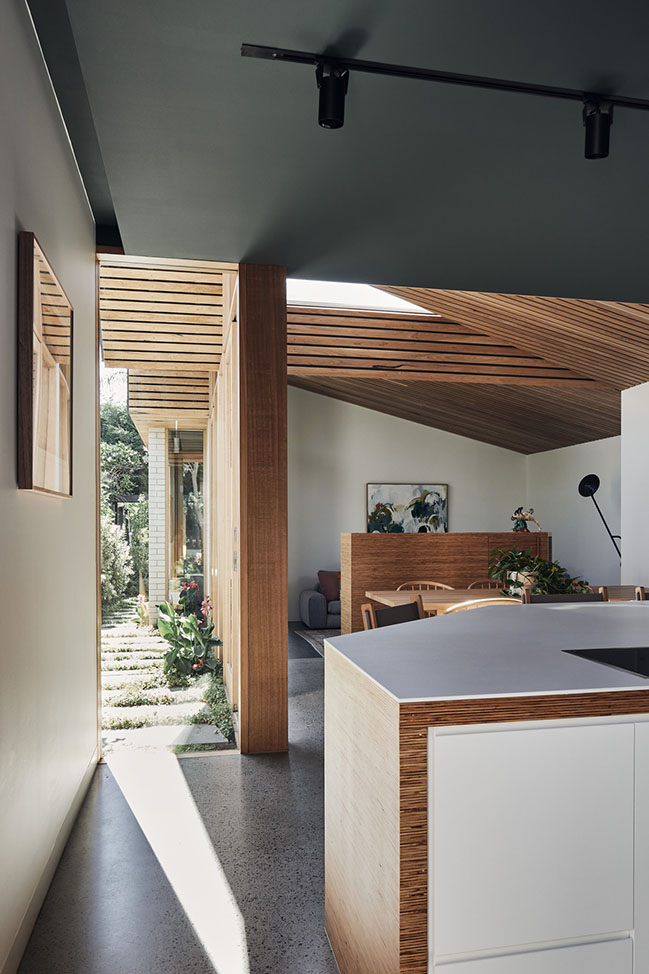 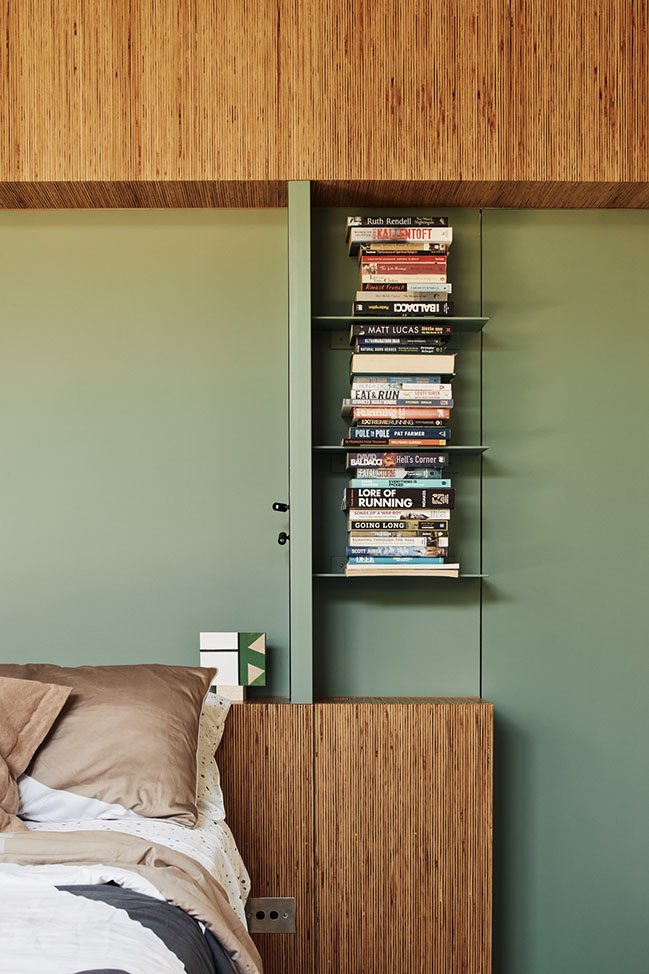 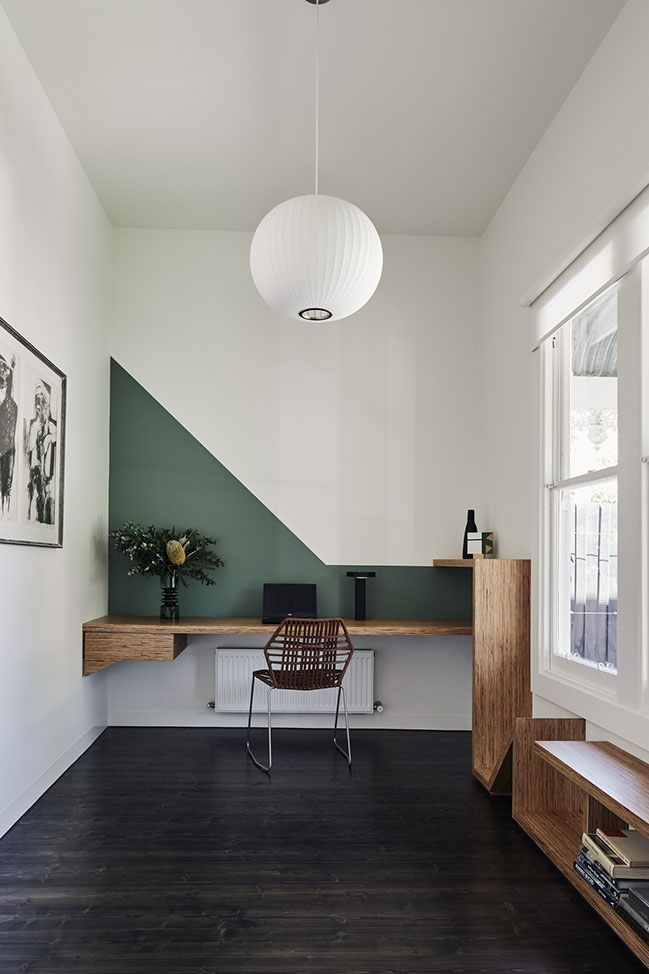 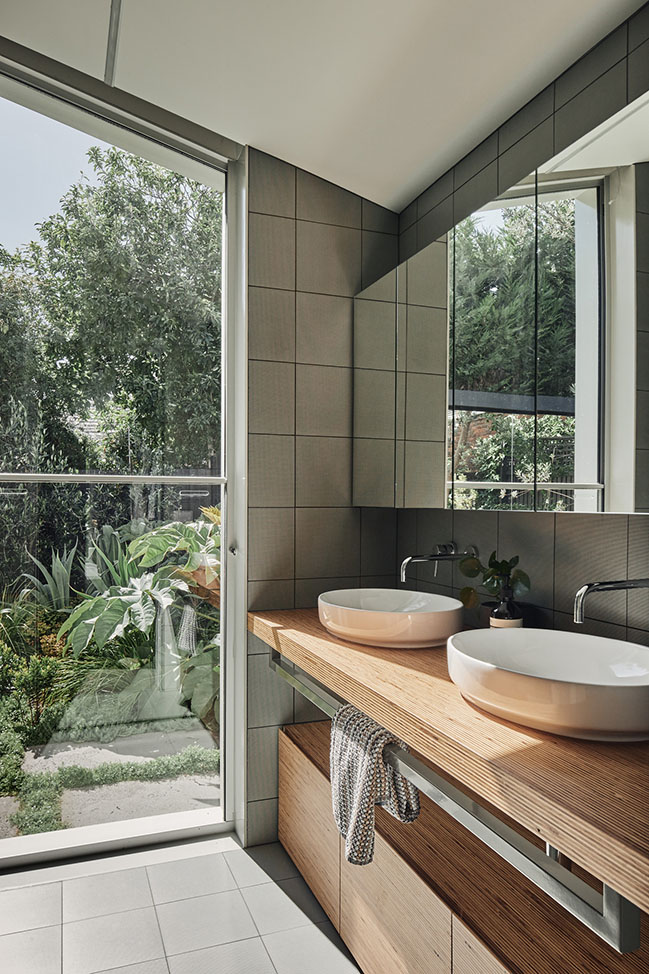 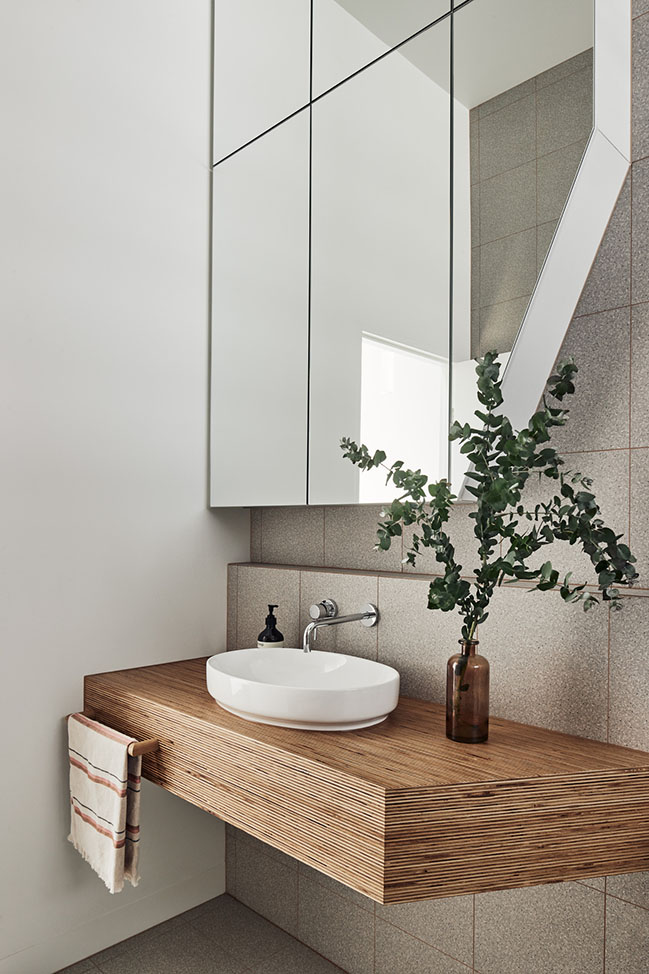 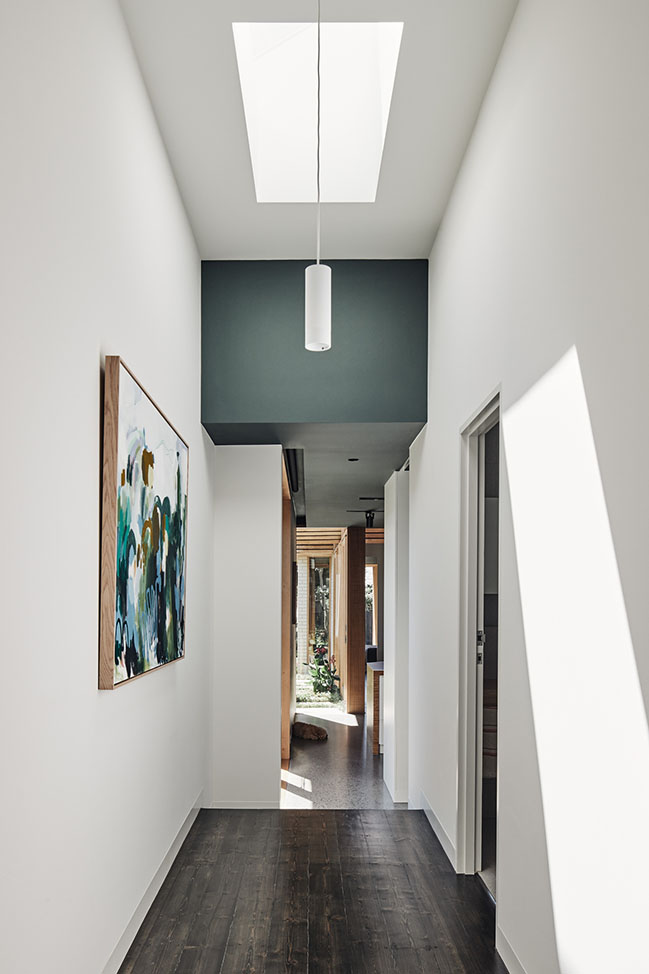 07 / 23 / 2021 The Ripple House is a series of unfurling spaces defined by subtle shifts in the site and light. Discreetly positioned behind a single-fronted Victorian façade, the addition reinvents the previously disconnected floorplan...