The London-based architecture firm AIM STUDIO has been awarded 2nd prize in the Małopolska Science Center Competition. The Małopolska Science Center will be built in one of the last such extensive open areas in the city, historically located between the dense urban clusters of Krakow, and the new housing estates of Czyżyny and Nowa Huta. The plot is located in an area designated as a ventilation corridor for the city and has high natural and scenic values.

The main challenge of the project was to create an iconic object, with a strong form and representative character, in a context that excludes metropolitan buildings.

From the architect: Guided by the above criterion, the project of the Małopolska Cultural Center is treated as a part of the existing landscape. The green roof, fully accessible all year round rises up from the open landscape of the nearby Aviation Museum towards a more urbanized surrounding to the north.

From the sloped roof there will be an impressive view of the adjacent airstrip, the Old Town of Krakow and further - the mountain ranges of Beskidy. It is supposed to be a place of recreation, rest, picnics, admiring sunsets and stars after nightfall. The roof is planned as accessible for external visitors, while within the exhibition and workshop areas of the building, viewing terraces are located, discreetly separated from the public part of the roof by means of greenery and glass balustrades. The lower part of the pitched roof, with integrated seating stones will serve as an open-air auditorium for concerts, shows, as well the annual airshows.

The form of the building, discreetly reminiscent of the wings of an airplane, is a reference to the historical context of the runway of the adjacent former airport. The dynamics of the form growing out of the landscape is further emphasized by a linear water feature running along the base of the façade. 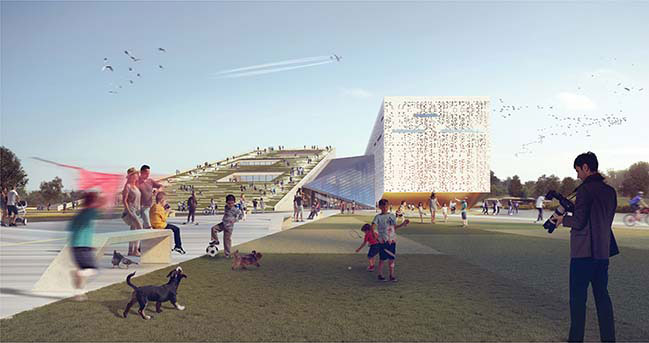 Viewed from above, the most characteristic feature of the Małopolska region are the longitudinal divisions of agricultural land, forming a multi-colored mosaic of green and brown stripes. This unique composition has become one of the inspirations for the development of green areas of the Małopolska Science Center, at the same time allowing the division of the area into various functional zones. 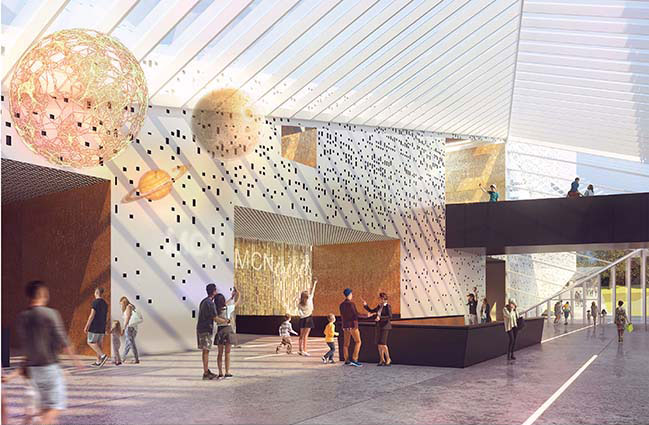 The plot is located between a major double-line road and the old airstrip, which is a local pedestrian-bicycle route. Access to the building has to be granted from 4 relatively equivalent directions: pedestrian/cycle from the north, and pedestrian/cycle/car from the south. In order to meet these assumptions, the Małopolska Science Center will consist of 2 blocks connected by a glazed hall - a prism. The prism is a connector between two equivalent entrances, from which, like scattered light waves – access paths are dispersed in key directions. 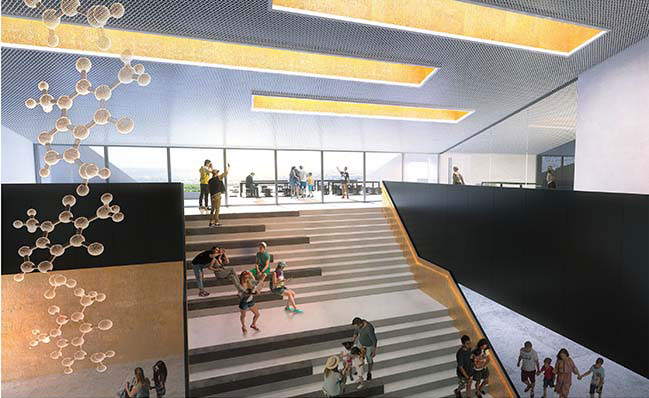 The facade of a building with a bright perforated structure can be interpreted in many ways: as continuous lines of binary code - a reference to the Cracow traditions of the Polish Mathematical Society, or a limestone cliff - part of the Jurassic geology of north-western Małopolska. After dark, the porous façad, lit from within will create a starry sky effect. The abstract and simple nature of the façade aims to emphasize the dynamic form of the building. 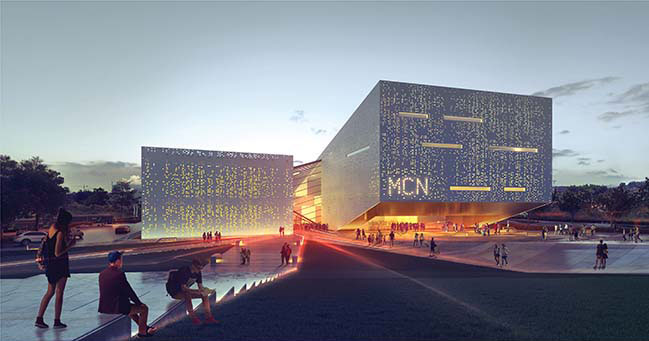 The building is divided functionally into several functional zones, distributed between the 2 main blocks. The primary exhibition zone runs through both blocks and 2 floors, in order to enrich and diversify the visitors’ journey. On their way, guests will encounter 2 key spaces. The first is a grand staircase, equipped with seats, opening to a panoramic glazed wall with access to the viewing terrace and café. The second key experience is crossing the bridge running between the two parts – with views north and south along the glazed atrium.

Separate entrances from the outside are granted to the conference, administrative and workshop zones. The ramps to the underground parking and loading bay are located under the sloped auditorium of the conference room. The basement consists of two levels of car park and one double-height storage / loading zone. 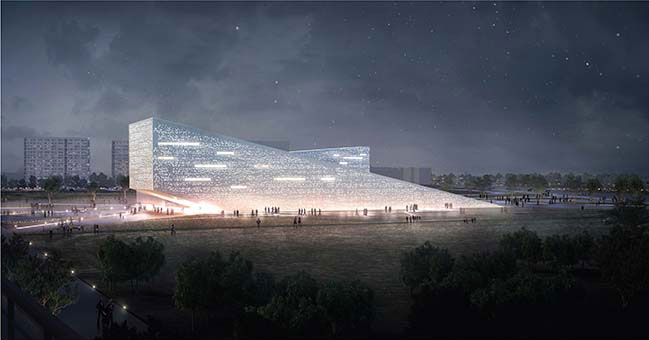 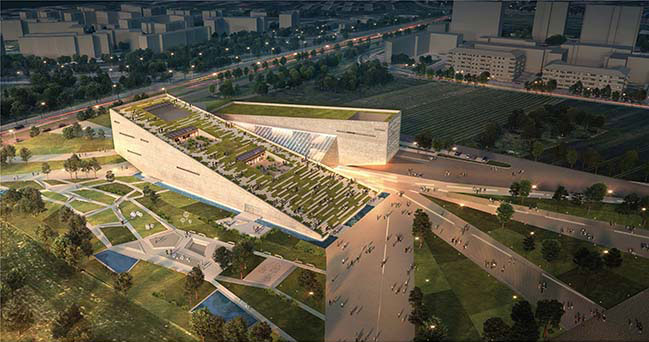 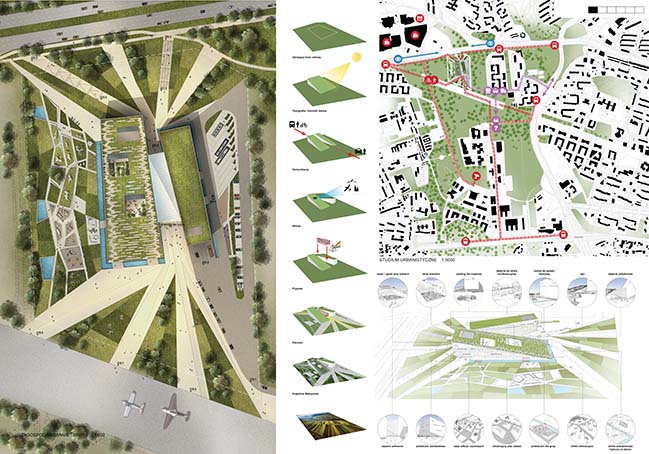 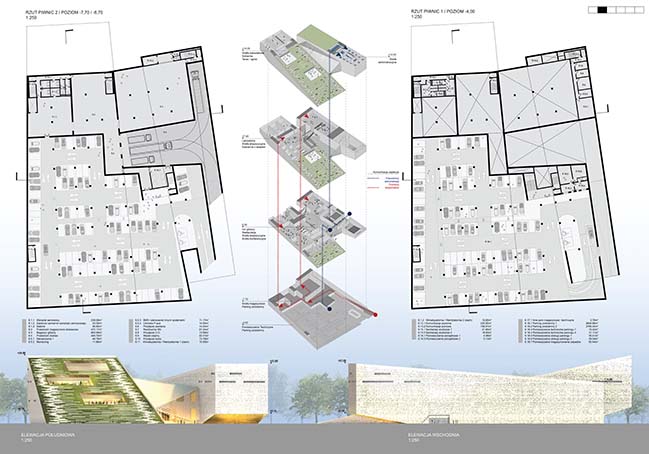 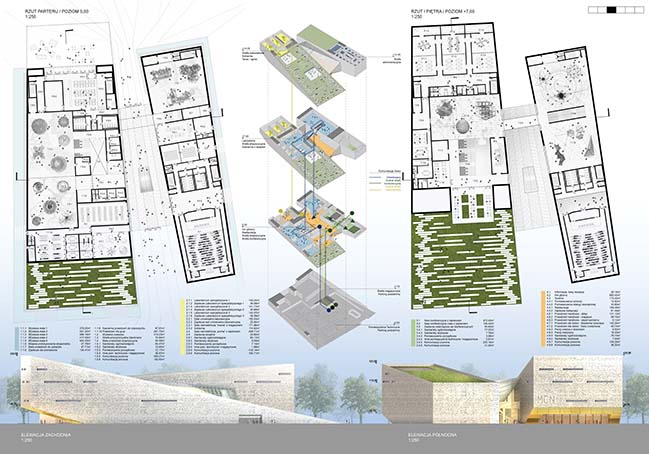 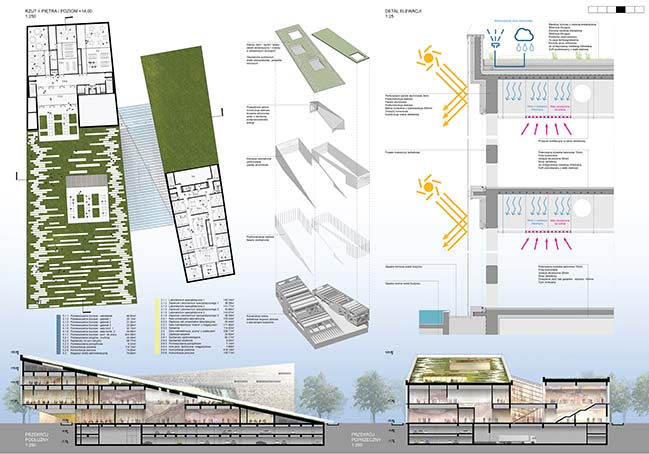 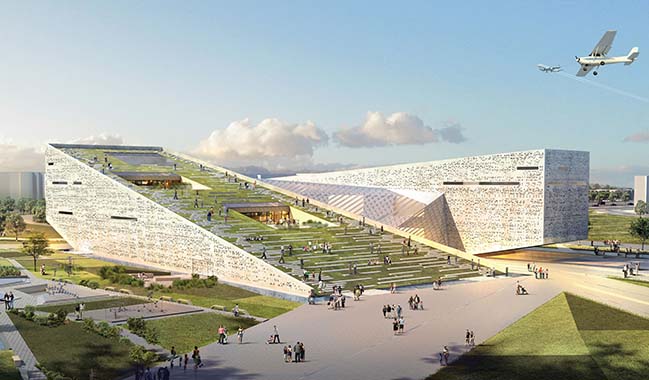