The Bloomberg Center is a 4-story building that is set beneath a photovoltaic canopy, with a low and narrow profile framing views across the Roosevelt Island. 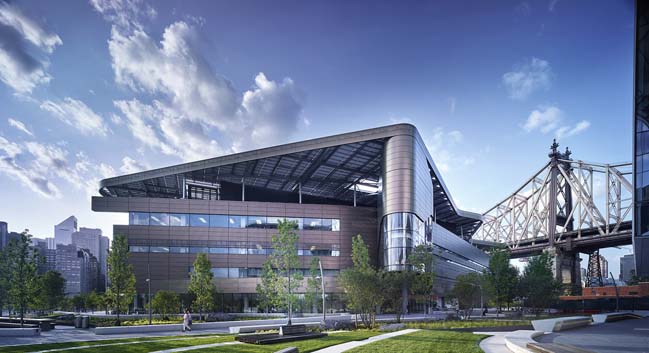 Project's description: The Bloomberg Center, named in honor of Emma and Georgina Bloomberg, forms the heart of the new Cornell Tech campus on Roosevelt Island, bridging academia and industry while pioneering new standards in environmental sustainability. The four-story building is set beneath a photovoltaic canopy, with a low and narrow profile framing views across the island. One of the building’s most distinctive features is its façade, optimized to balance transparency—maximizing daylighting and exterior views, and opacity— maximizing insulation and reducing thermal bridging. 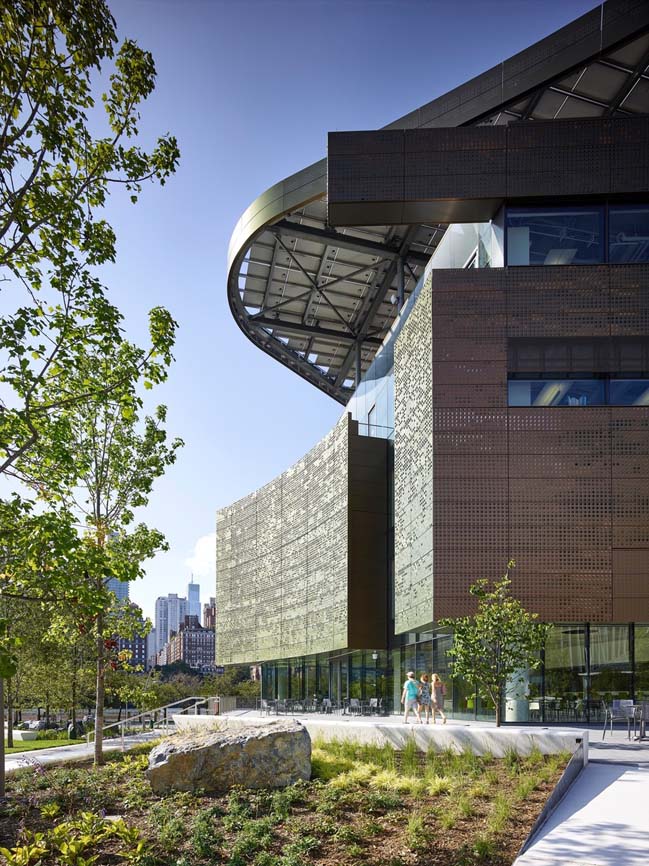 Designed as a rain screen system, the outermost layer of the façade is composed of aluminum panels surfaced in an iridescent, PPG polymer coating. Viewed from afar, the aluminum panels register a continuous image that merges the river-view scenery from Cornell Tech’s Roosevelt Island location and Cornell University’s idyllic campus in Ithaca, New York. Facing the city, the Bloomberg Center’s west façade registers the image of the Manhattan skyline as it is viewed directly across the East River. Along the campus’ main entry and central circulation spine (the “Tech Walk”), the east façade registers an image of Ithaca’s famous gorges. 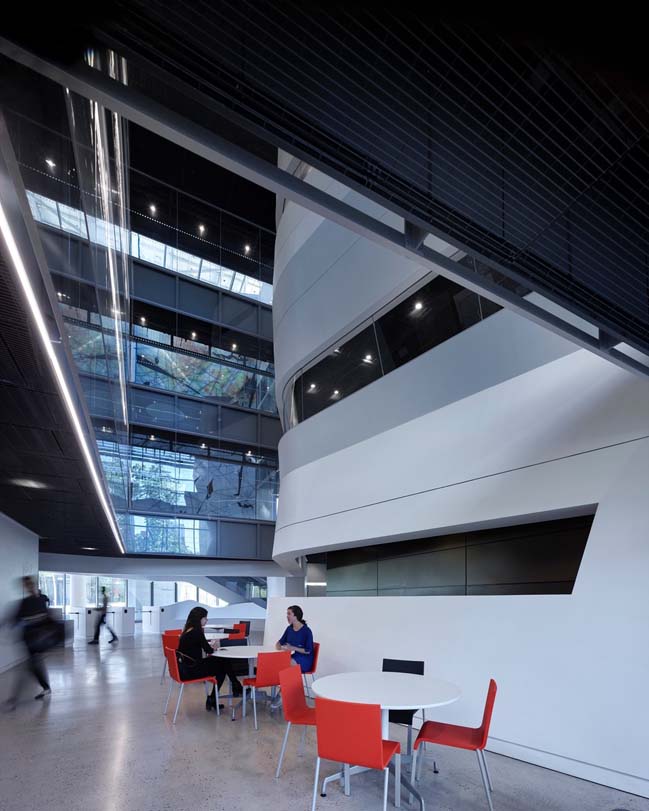 Designed in collaboration with Zahner, an architectural metal fabricator, the façade utilizes Zahner’s Louvered ZIRA™ system to create the image patterning. Each pixel of the image is translated into the specific turn-and-tilt of a two-inch circular tab punched into the aluminum paneling; the depth and rotation of each tab determines the amount of light reflected. This pixel map was fed into a repurposed welding robot, which processed the digital information into the mechanical turning-and-tilting of the façade’s 337,500 tabs. The algorithm controlling the robot was developed in collaboration with Cornell and MIT students.

The Bloomberg Center also serves as a focal point for the Roosevelt Island community, with a publicly accessible ground-floor café located at the southern end of the building. The entry atrium and the Lecture Hall, aligned with Manhattan’s 57th Street, connects building users with Manhattan views across the river. Visible from the campus’ Tech Plaza, a monumental stair rising from the main lobby guides vertical circulation to all levels. Highlighting Cornell Tech’s river-to-river campus, the main stair looks out onto Queens through a viewing corridor framed by other campus buildings. An open galleria extends throughout the length of the building, serving as a shared avenue for informal encounters, discussions, and collaborations. Enclaves for impromptu meetings line the main galleria, with conference rooms and multipurpose meeting areas capping the ends. 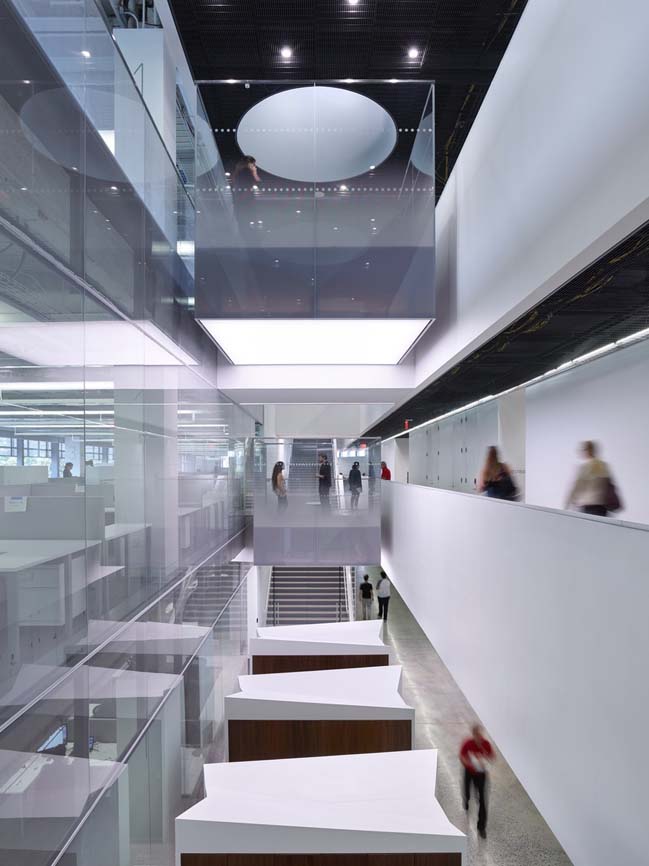 The academic spaces in The Bloomberg Center are designed around fundamental changes in learning and teaching that are happening at all institutional levels today. The Center features a varied set of spaces to support different learning modes allowing for flexible and mobile learning. Collaborative and flexible spaces are as important as private and meditative spaces. While offering traditional classroom spaces and large open workspace areas, there are also clusters of break-out spaces, huddle rooms, and social areas that allow for group study, as well as quiet rooms and micro-pods that function as private work spaces or telephone booths. 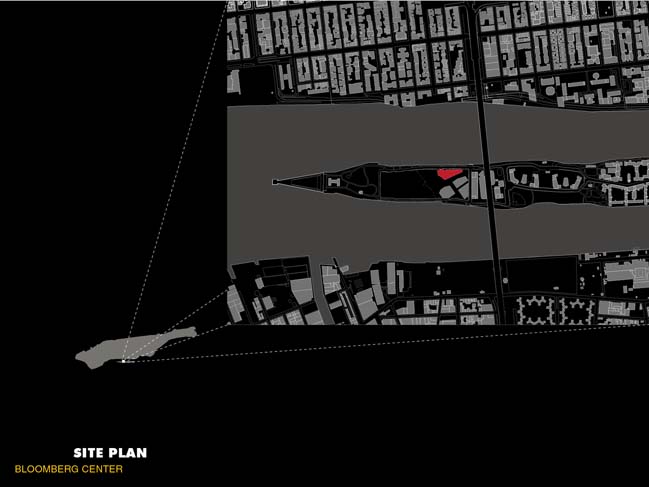 In keeping with the mission of sparking creativity, one percent of the Bloomberg Center’s overall budget is dedicated to art. Newly commissioned, site-specific artworks by prominent contemporary artists, including Matthew Ritchie, Michael Riedel, Alison Elizabeth Taylor, and Matthew Day Jackson are integrated within the fabric of Morphosis’ design. The Bloomberg Center also includes a restored WPA-era mural by Ilya Bolotowsky that was uncovered in the former Goldwater Memorial Hospital on Roosevelt Island after its closure in 2014. 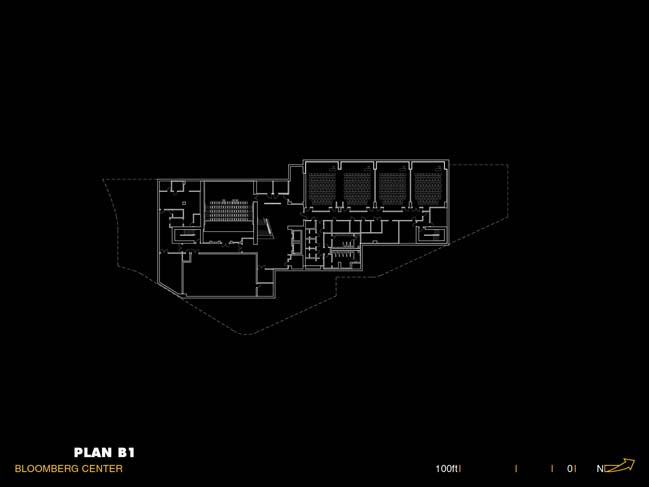 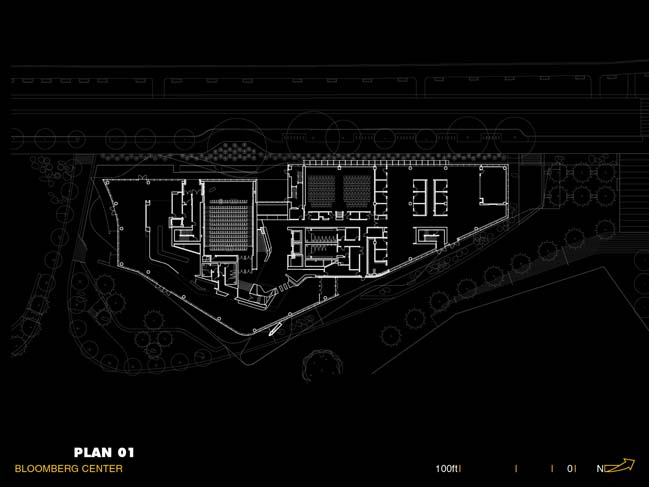 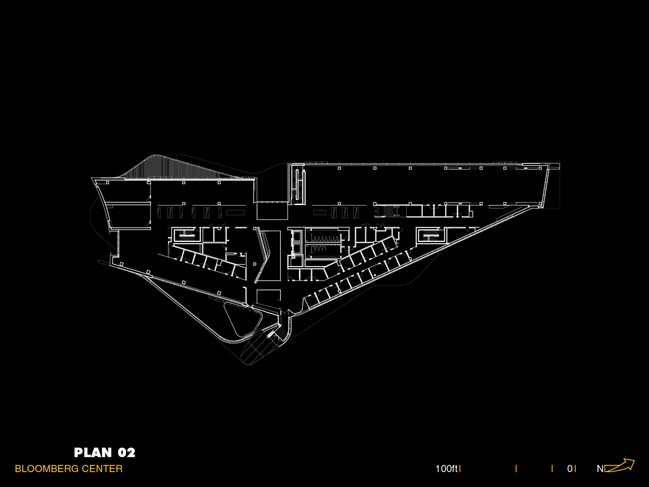 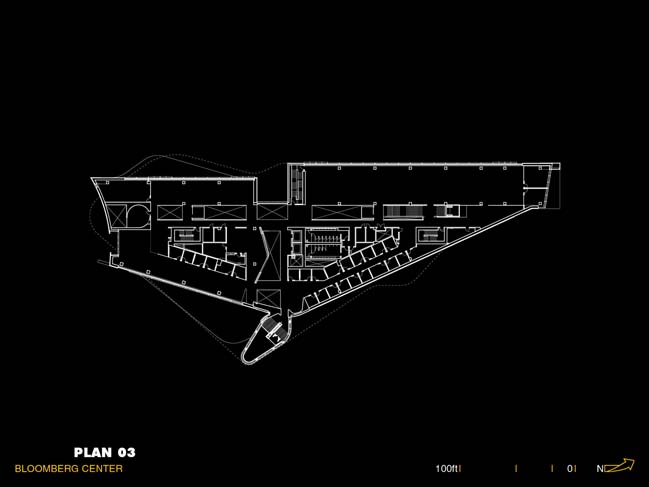 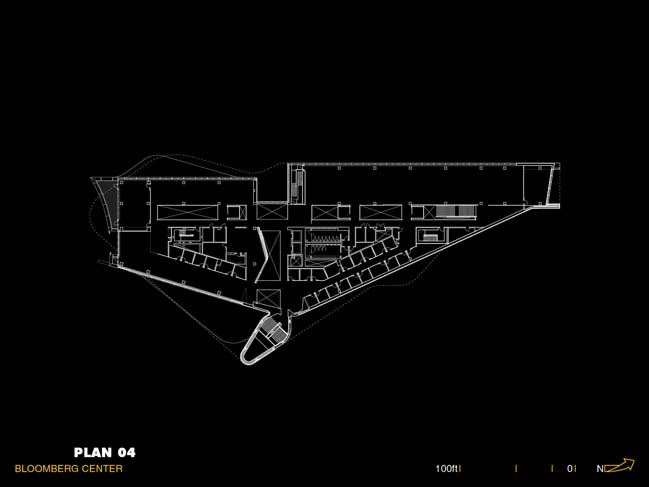 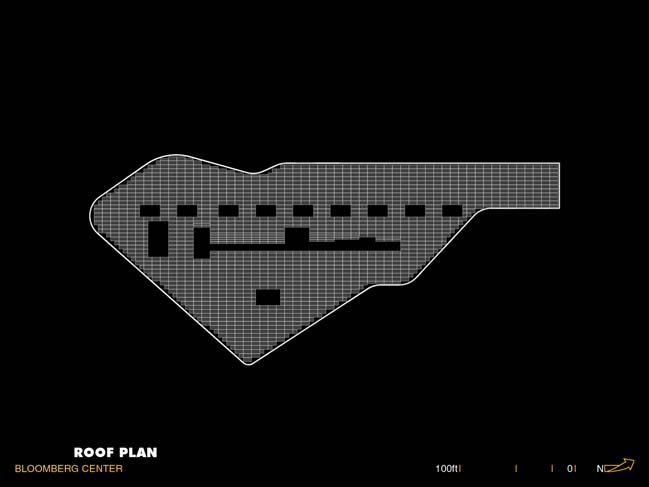 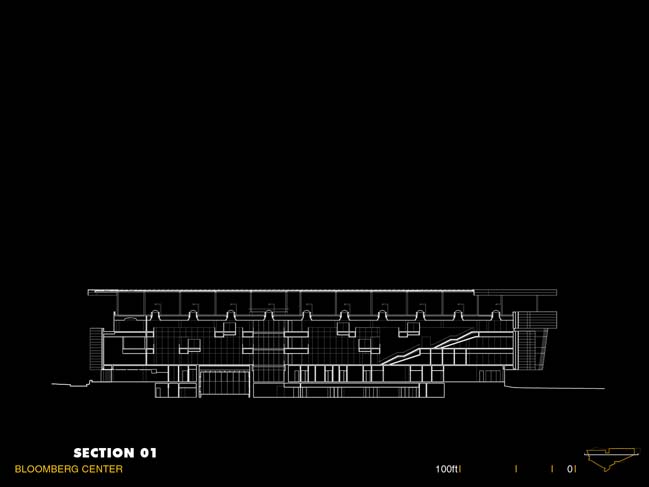 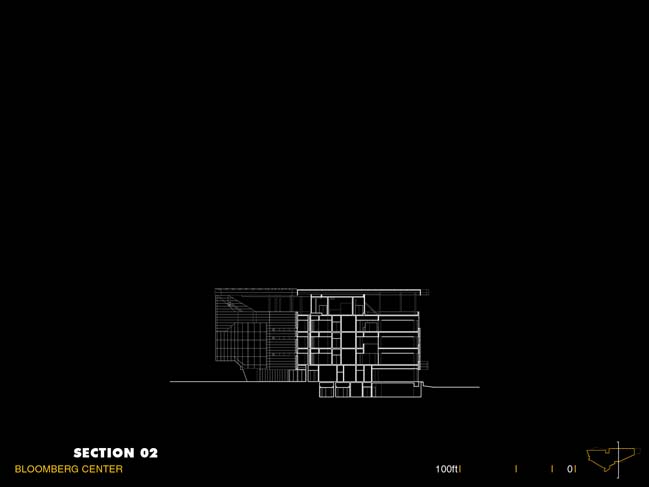 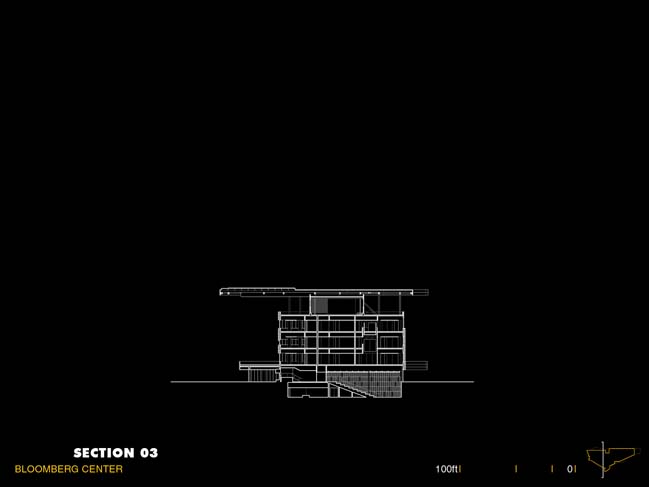 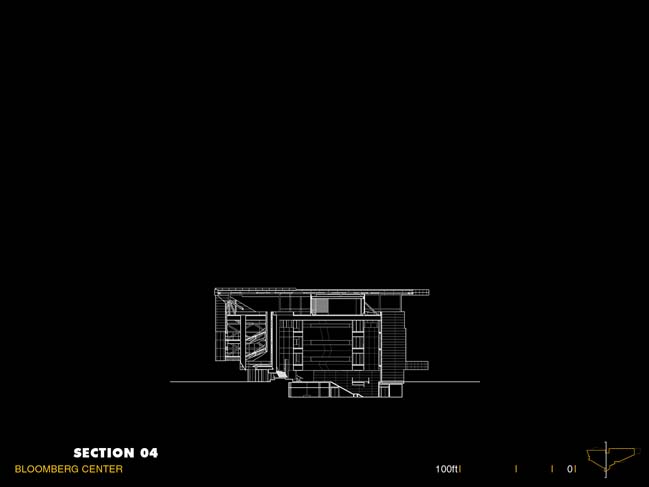 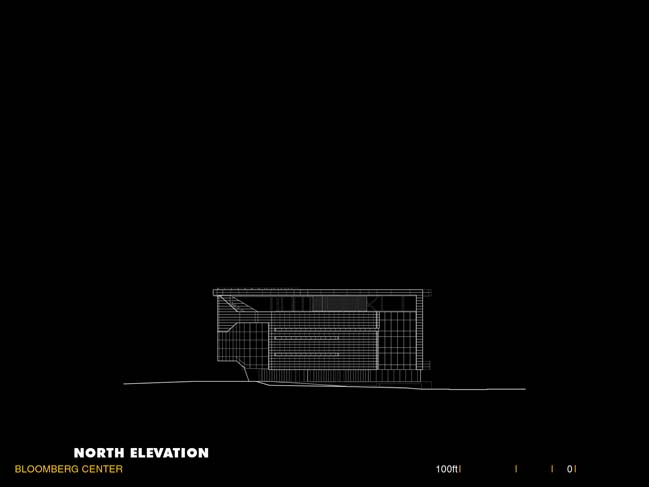 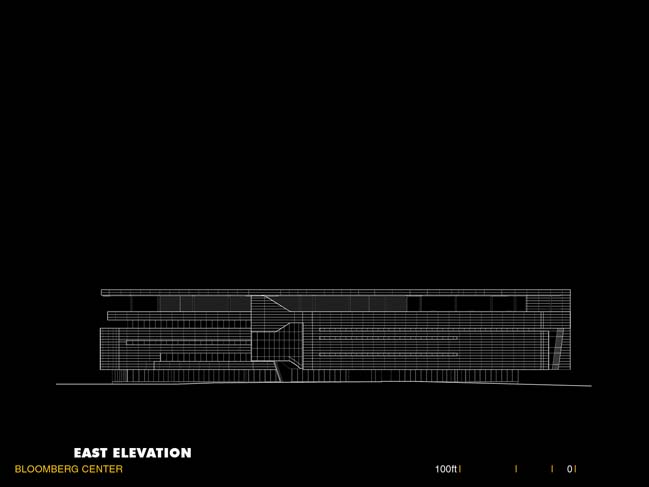 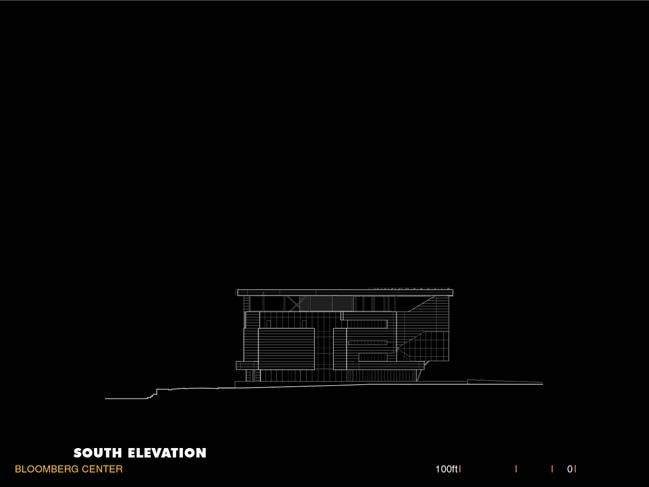 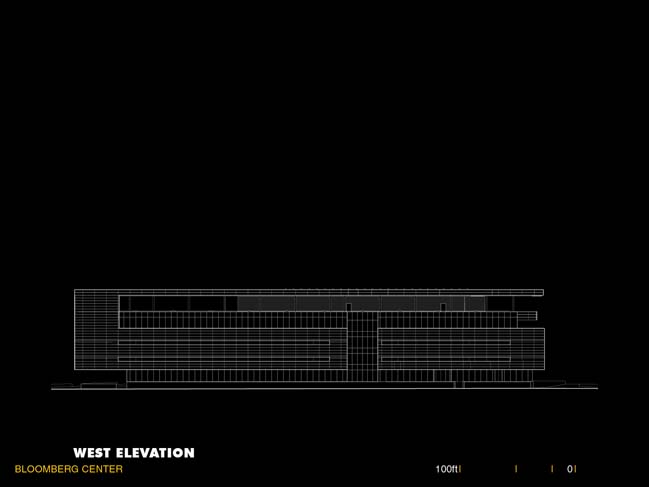 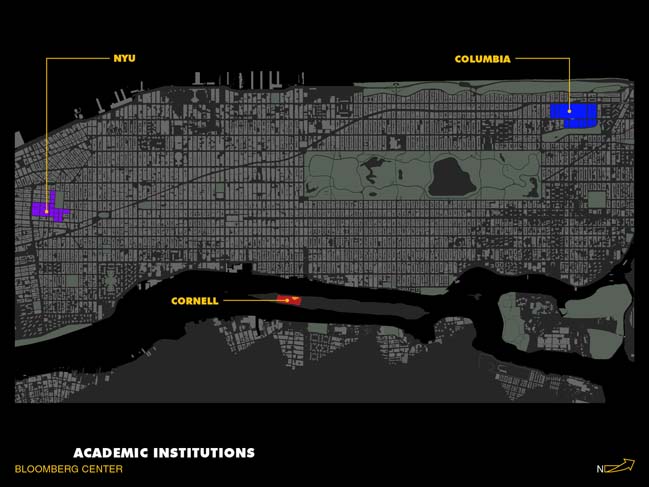 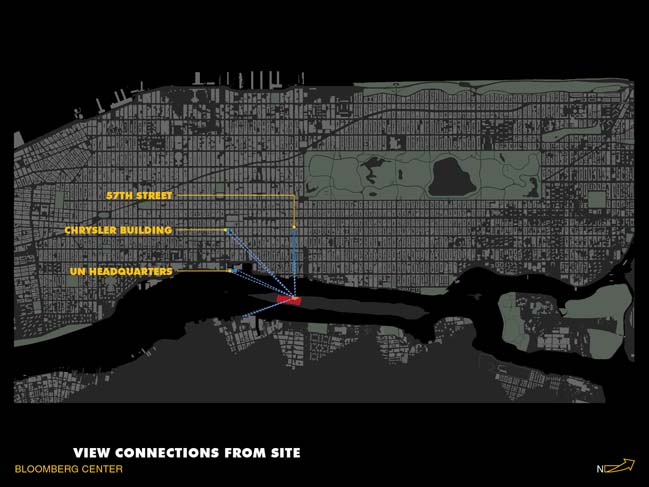 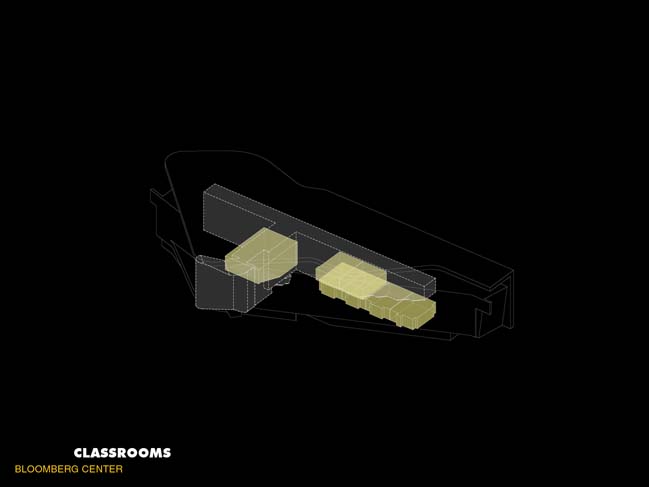 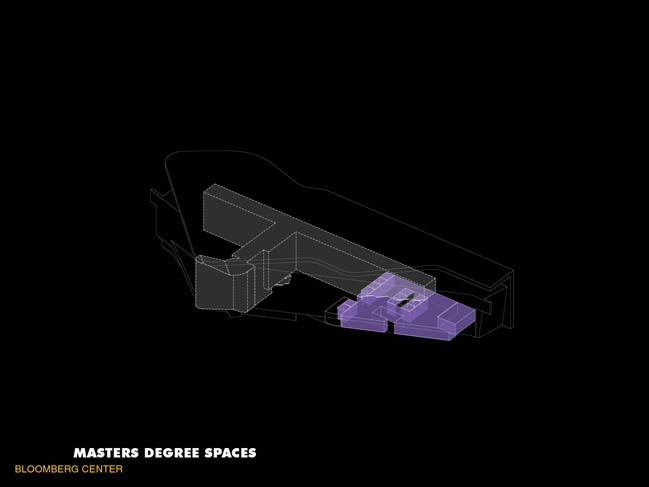 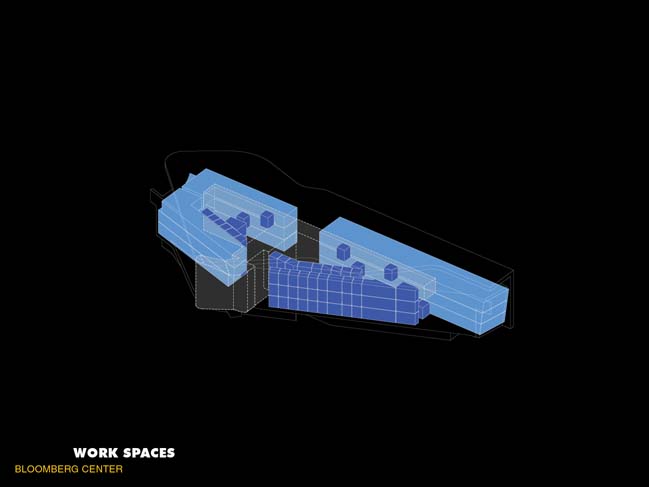 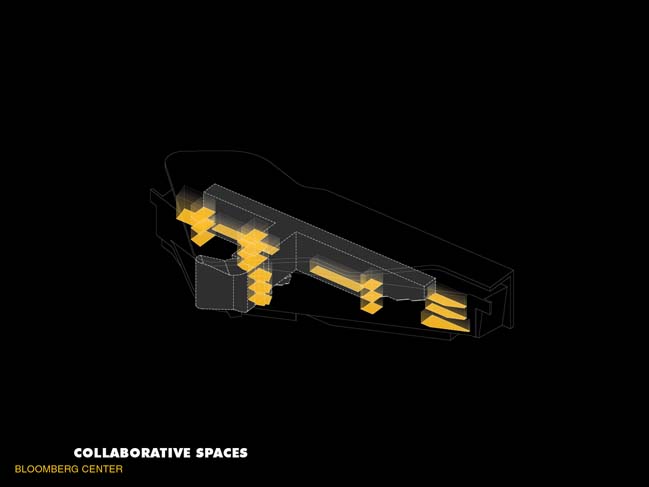 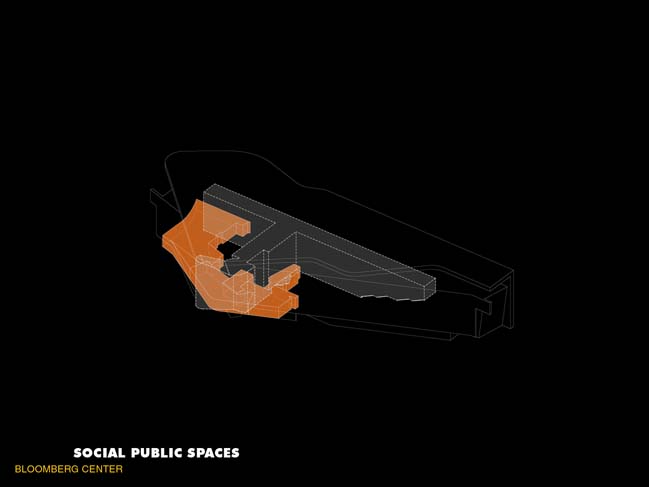 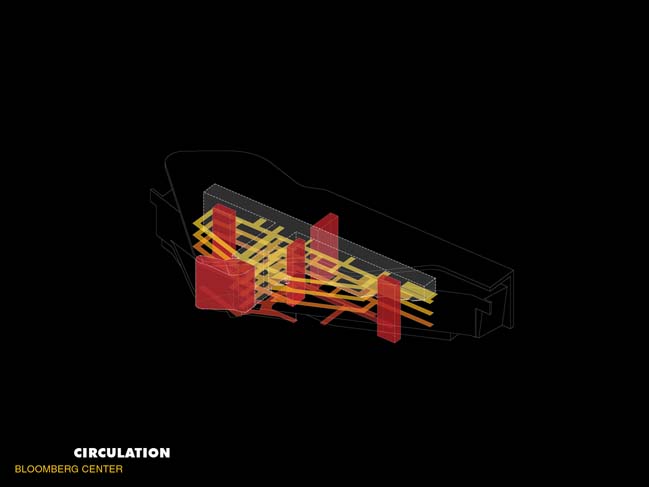 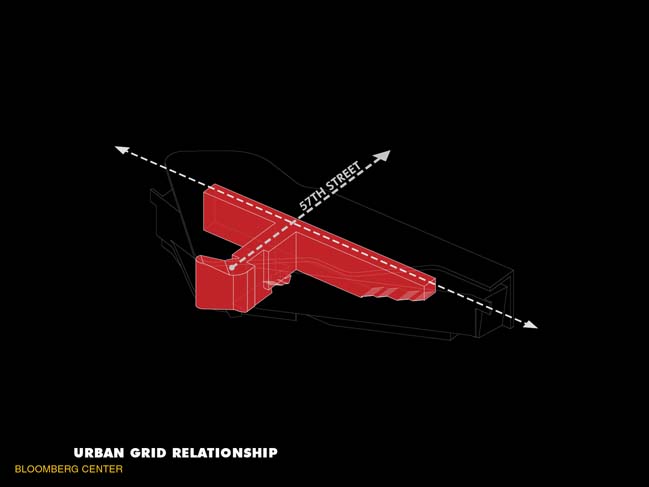 10 / 03 / 2017 The Bloomberg Center is a 4-story building that is set beneath a photovoltaic canopy, with a low and narrow profile framing views across the Roosevelt Island