gmp Wins Competition for the Staatsbibliothek zu Berlin. Rehabilitation and Restructuring of the Architectural Icon by Hans Scharoun.

The architects von Gerkan, Marg and Partners (gmp) have been awarded first prize in the competition for the modernization and restructuring of the Staatsbibliothek zu Berlin from Hans Scharoun. The jury found that the design for the golden “ship of books” meets the demands of new, open libraries in the 21st century while at the same time preserving and again revealing the outstanding architectural qualities of this important academic library.

On behalf of the Stiftung Preußischer Kulturbesitz (Prussian Cultural Heritage Foundation), the Federal Office for Building and Regional Planning had invited fourteen international architectural firms to a restricted competition for the comprehensive and landmark-conform repair and restructuring of the Potsdamer Straße branch of the Staatsbibliothek zu Berlin (Berlin State Library), in which the architects von Gerkan, Marg und Partners (gmp) were awarded first prize for their design. The jury saw it as a strength of the design that additional space is gained by expanding the areas that are freely accessible to the public – thereby doing equal justice to Scharoun’s original concept and the demands of a contemporary, open library.

The Potsdamer Straße branch of the Staatsbibliothek zu Berlin is located in Berlin’s Tiergarten district. As part of Berlin’s Kulturforum, the so-called Bücherschiff, or “ship of books,” was built from 1967 to 1978 according to plans by the architect Hans Scharoun, with decisive input from his employee Edgar Wisniewski. With its significant holdings of scholarly and scientific literature and its valuable collections, the research library has national and international significance far beyond Berlin’s borders. The building is protected by landmark status and is considered an icon of postwar modernism. The Berliner Philharmonie is another prominent building by Hans Scharoun in the immediate vicinity, also on the Kulturforum.

Libraries in the 21st century will be more than just book stacks and places for obtaining and imparting knowledge. They increasingly serve as public spaces for the urban community and knowledge society, acting as addresses for exchange and socially relevant debate.

“In addition to a carrying out a comprehensive overhaul with historic preservation in mind, our design sets itself the goal of rethinking the public areas of the library and generating contemporary qualities of use and occupancy.” (Stephan Schütz, Partner gmp Architects) 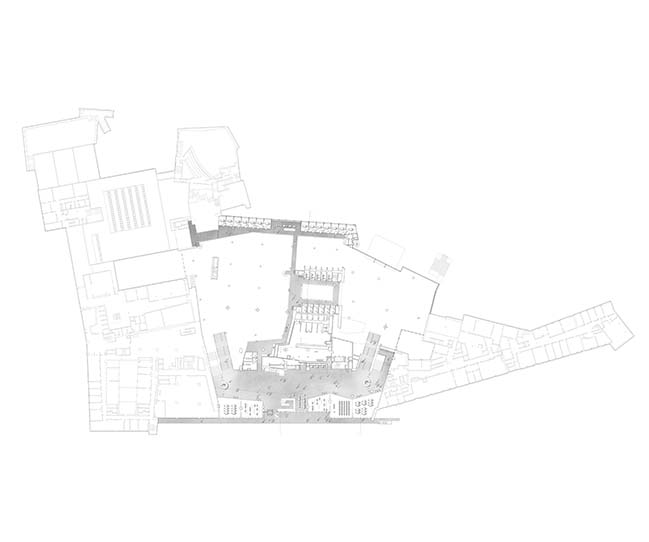 The special history of the Scharoun building’s development should thereby remain legible – thus preserving its authenticity and identity. In this context, the interests of heritage conservation are of outstanding importance in the design and subsequent restoration. 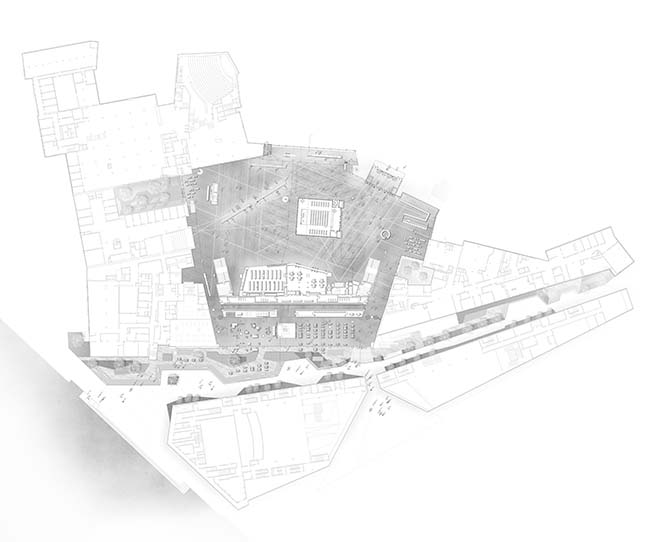 The redesigned building will be barrier-free. The lobby will be reorganized, and the former open-plan office in the eastern part of the building will be expanded into a publicly accessible area. Next to the new entrance at the northeast corner of the lobby, directly opposite Marlene-Dietrich-Platz, will be a cafeteria with 140 seats; south-facing reading terraces with views of an expanse of water located there establish fluid transitions between inside and outside. This opening out to the city is a response to the present-day urban conditions. The ground floor is also further enlivened by the placement of fixed and movable furniture that revives the building’s original spatial concept. The lobby will be expanded to include an exhibition from the collections. In addition to the conventional reading room and the rooms for group study, new event spaces, workshop areas, and informal work islands offer diversified spatial options. 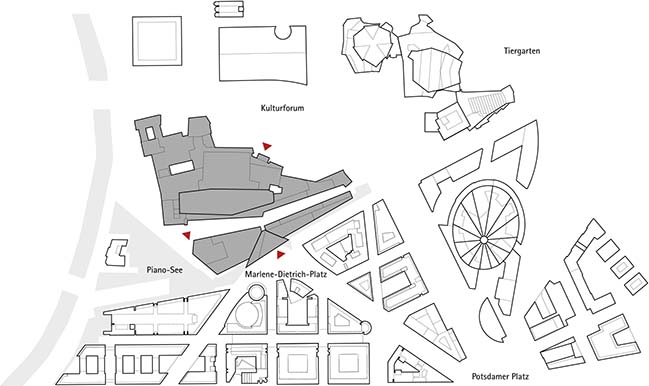 Further substantial expansion of the freely accessible areas is achieved by relocating the access control to the first floor, just in front of the reading room stairs. By doing so, the lobby space there is regained as public space and the southern entrance stair is given new life. Finally, the acoustic conditions are improved by moving noisy activities to separate rooms away from the lobby. 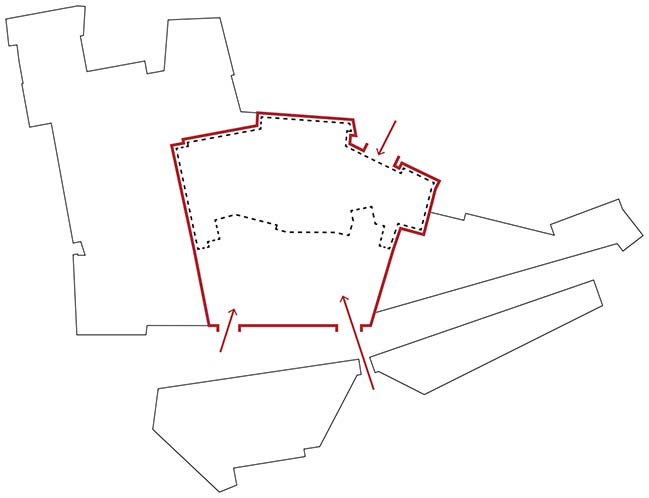 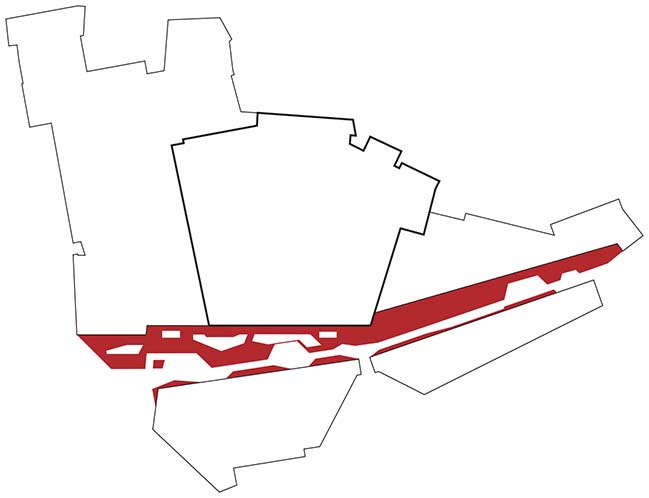 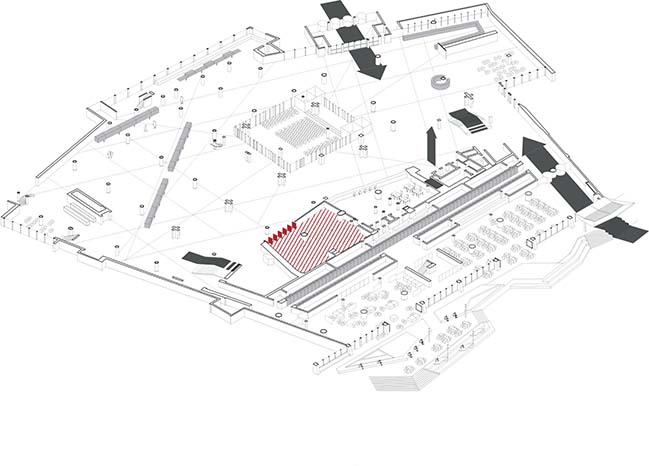 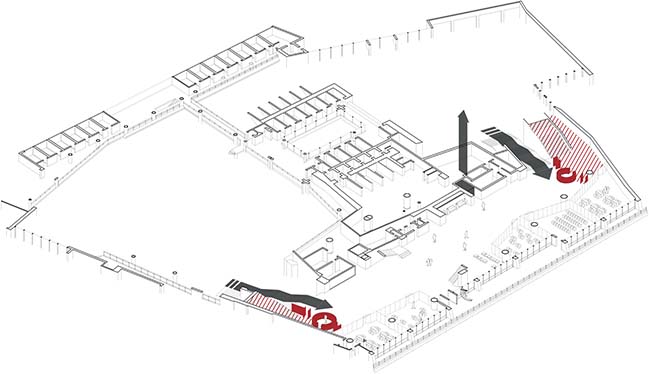 09 / 22 / 2019 gmp Wins Competition for the Staatsbibliothek zu Berlin. Rehabilitation and Restructuring of the Architectural Icon by Hans Scharoun