This project was designed by Kéré Architecture for the new parliament building in Ouagadougou. The project is part of a larger masterplan for the original site of the revolts that destroyed the previous building.

Project's description: After 31 years of dictatorial rule, the people of Burkina Faso rose up and ousted their former president following a violent revolt in 2014. In protest of the old regime, the former National Assembly was attacked and destroyed by the citizens. The conflict is significant because it poses an opportunity to not only reflect on the turbulent historic events that have led the nation to this crossroads, it also begs the question of its citizens: How do we move forward?

When Francis Kéré was asked to propose a design for a new parliament building, it was crucial for him to implement a design that not only addresses the core democratic values of transparency, openness & equality, but could also become a catalyst for growth and development for the capital city of Ouagadougou as a whole.

As opposed to the common practice of replicating models imported from the west with no consideration for local needs, resources and climate; Kéré looked to tradition for the design of the 127-seat assembly hall. In rural areas, the elders of a village gather to discuss important matters under the shade of a great tree. Kéré reinstated this Arbre à palabres, or tree of discussion, in a private garden directly adjacent to the formal assembly hall where members of parliament can convene more directly.

In a village setting, the process of decision-making is not a private matter occurring behind closed doors; community-members are free to sit near the gathering and observe the proceedings. In this true spirit of transparency and openness, the outer facade of the parliamentary structure is designed to be inhabited by the public. The stepped pyramidal structure becomes a monument that citizens can climb and have an elevated view of Ouagadougou. In an area where the highest altitude does not exceed more than 400 meters, this unexpected but accessible height in the middle of the flat urban fabric offers a new perspective both literally and metaphorically.

As an overwhelming majority of Burkinabé's practice subsistence farming with 90%* of the labor force dedicated to agriculture, farming is crucial to the survival and prosperity of Burkina Faso. For this reason, the facade acts not only as solar shading that allows air to freely circulate the interior, it also hosts several green terraces that will pioneer new methods of agriculture. These plots will be accessible to the public and will serve as an educational tool to encourage urban farming.

The new parliament building is part of a larger masterplan for the original site of the revolts that destroyed the previous building. In Kéré's plan, the ruin of the old assembly is transformed into a shaded depression in the earth where rain water is collected and used for on-site irrigation. The space is intended as a memorial where visitors can relax in the shade and reflect upon those who lost their lives in the revolts. The reflection pool also serves as a passive cooling system for the interior. Surrounding the memorial is a plaza where a grove of local trees will provide shaded areas for seating and gathering. New commercial storefronts and exhibition spaces with shaded bicycle and car parking are also included.

02 / 21 / 2017 This project was designed by Kéré Architecture for the new parliament building in Ouagadougou. The project is part of a larger masterplan for the original site... 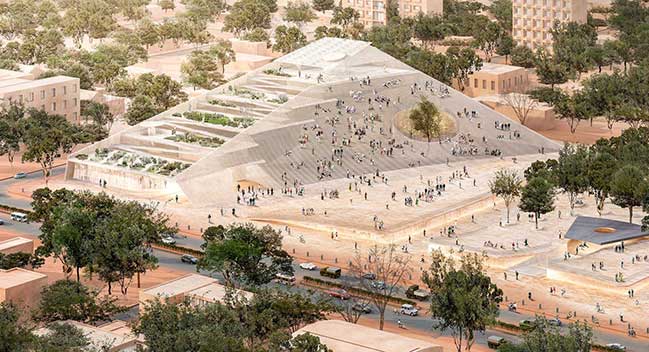