The project here, with design completed in collaboration with Ten Eyck Landscape Architects, affects the park's southernmost tip, affectionately referred to as its “recreational heart and cultural soul” and is the first to be implemented from the Master Plan...

From the architects: Known as Austin’s first park, this 84-acre public green space has a rich history spanning from ancestral native civilizations to the city’s founding mothers and fathers; its popularity endures with Austinites today. To establish a comprehensive approach for the park’s rehabilitation, preservation, and the enhancement of its cultural, recreational, and natural features, Pease Park Conservancy hired Clayton Korte in 2014 to design a Master Plan for the park with urban planning and landscape architecture firm Wallace, Roberts & Todd.

With a focus on the park’s built elements, historic features and cultural resources, Clayton Korte performed an inventory and analysis and developed conceptual alternatives. Following participation in a series of public meetings, the Master Plan was finalized and submitted to the Austin City Council who moved unanimously to adopt it in the fall of 2014. Subsequently, the Master Plan received the 2015 Project Planning Award by the American Planning Association’s Texas Chapter Awards Committee. 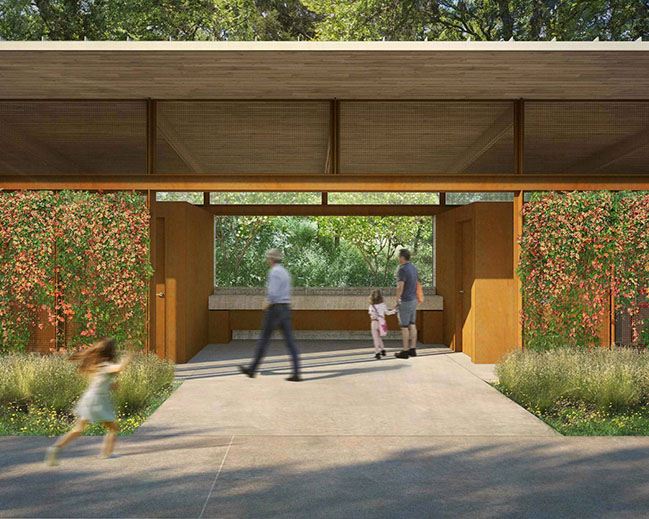 The project here, with design completed in collaboration with Ten Eyck Landscape Architects, affects the park’s southernmost tip, affectionately referred to as its “recreational heart and cultural soul” and is the first to be implemented from the Master Plan. The two primary components include:

Tudor Cottage | Built in the 1920s, the Tudor Cottage is one of the earliest park facility buildings constructed in Austin. The picturesque little building, originally built as a restroom, is in the Tudor Revival Style and sits on a bluff overlooking the southern end of the park. Its proximity to the hub of the park’s activity makes it an ideally situated event venue. Interior walls are removed to open the space up into a single room, and a new roof structure allows a vaulted ceiling (while keeping the existing wood shake roof in place) to create a more expansive sense of space. The exterior is treated with a light touch, except for the north side where a new large glazed opening connects the interior with views to the expansive terraces leading out to the park. 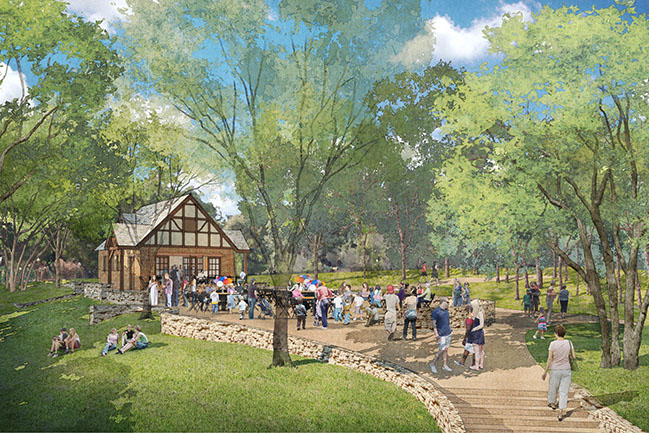 Kingsbury Pavilion | Two new buildings will serve to support the park.  As support buildings, they are deferential to the rest of the park. Accordingly, the buildings are pushed to the park’s western edge where they tuck into a hillside slope. With a color palette inspired by the tree-covered hillside and walls of mesh, the buildings recede into the background. A restroom building is organized like a classic dogtrot, with the vanities in the breezeway, looking through the building into the woods beyond. The storage building opens to a new courtyard / volunteer center between the two buildings.  With amphitheater-like seating built into the hillside, this space is the perfect spot to organize workdays or just rest in the shade.

YOU MAY ALSO LIKE: New sports and entertainment in Austin by BIG

12 / 31 / 2020 The project here, with design completed in collaboration with Ten Eyck Landscape Architects, affects the park's southernmost tip, affectionately referred to as its recreational heart and cultural soul