JA arquitectura + Groendak proposal was chosen as the winner among 60 other proposals submitted to the contest. It was chosen by the municipality of Rotterdam as the best project to transform the Maassilo roofs, highlighting its sustainable values. 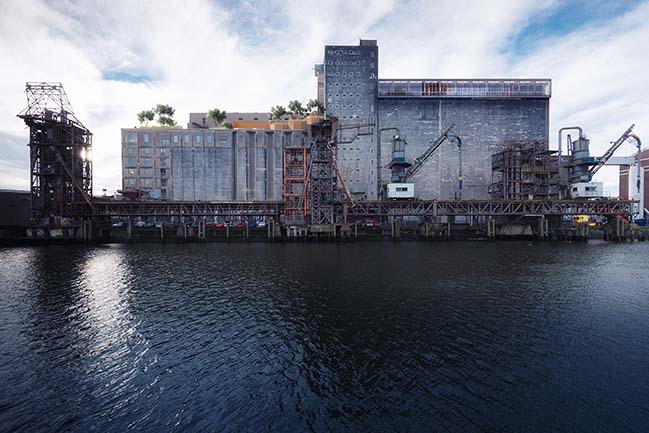 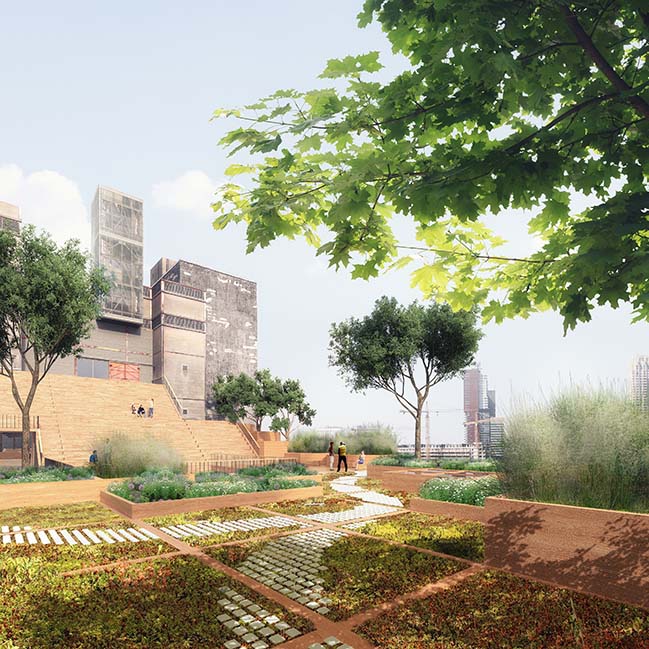 From the architect: The Maassilo is an iconic monument of the Dutch industrial past in the harbor of Rotterdam. Its first construction phase was initiated in 1906 by the architect J.P. Stok; in 1919 architects J.A. Brinkman and L.C. van der Vugt designed a big extension of the building and in 1951 architects Postma completed the final extension of the grain silo. During the 1980s, automatization was integrated into industrial production and the building proved to be obsolete and ceased its activity. 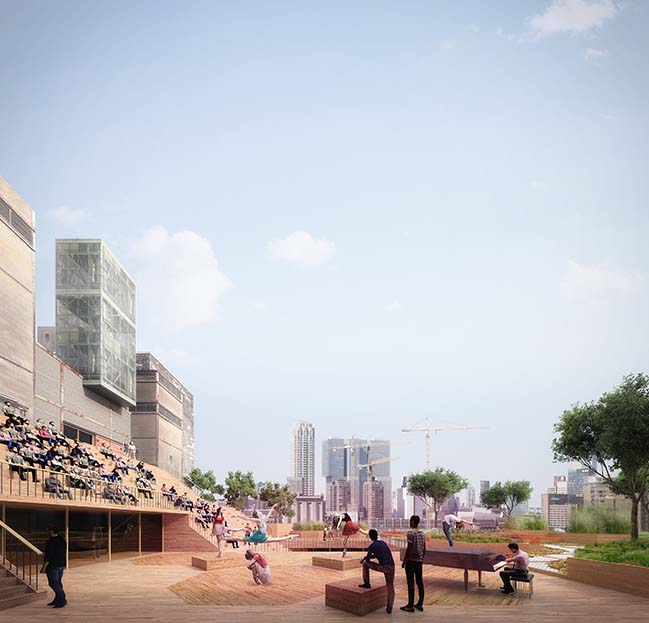 The largest and oldest grain silo in Europe initiated its transformation in 2004 when opened its doors again as a unique industrial event location where very diverse events from 200 to 5,000 people are possible, occupying existing different sizes rooms available in the building. The old Stok building houses the Creative-Factory, a seven floors co-working space. In 2018 JA arquitectura + Groendak propose the ultimate transformation of the Maassilo: a new sustainable roof that reconnects the entire building. 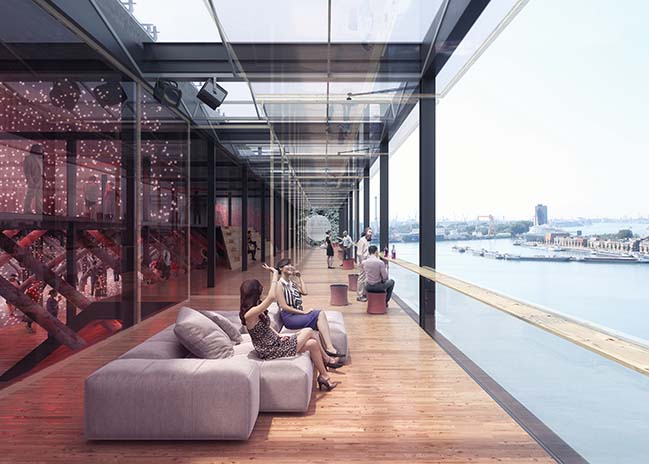 The new design retrieves the beautiful hidden geometries of the concrete silos to transform the roof and last floors of the building. On the Stok building an event deck is placed, a multifunctional outdoor space where varied events can be held for up to 1,000 people (concerts, theater plays, product presentations, company events, weddings, seminars, etc.) while enjoying the views to the entire skyline of Rotterdam. The Event Deck is accompanied by the Sky Garden, a 950 m² garden elevated 35 meters where the users can enjoy the diversity of plants changing over the seasons. This Event Deck is completed with a multifunctional tribune that connects floor 7 (the Creative Factory) and floor 10 (Factory010) with the Event Deck and houses below a multipurpose room, 230 m² of auxiliary space for the outdoor activities. 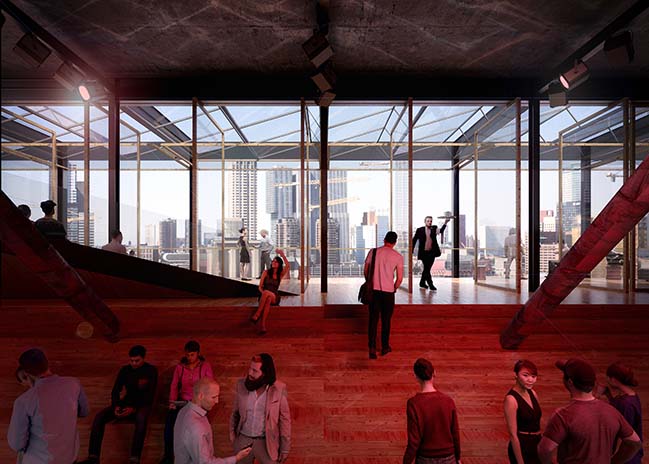 The extension of the Factory010 transforms the interior dark space of the main hall of the nightclub into a dynamic stepped space open to the skyline of the city through a new glass box. The Skybox presents a diaphanous and transparent space, with a system of two glazed facades that allows it to adapt to the climatic conditions of the four seasons of the year, protecting itself from wind, rain and sun. The structure of the skybox reflects on the facade the rhythm of the hidden silo structure. The levels of the main room, Skybox and mezzanine are connected by an stepped tribune, creating a dynamic crossroads of visions.

The project is completed by an Energy Farm, a 3,300 m² green roof creates a natural isolation for the building and it serves as a cold carpet for a large installation of solar panels. This roof generates enough electricity to cover the electrical demand of the building in case of normal activity and reactivates the silo that remains inactive since the 80's. The available space of the silos is used as storage of the batteries that store the energy generated by the solar panels. In addition, with the combination of green roof plus storage space in the silos, the building is equipped with a storm absorption system to help the city of Rotterdam to drain the abundant rainfall of the Dutch climate. In addition, this accumulated water can also produce energy when evacuated. 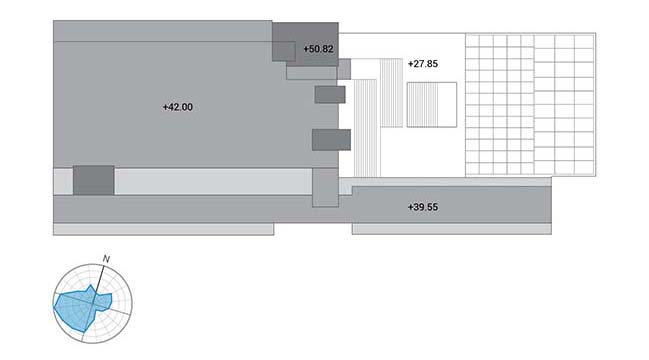 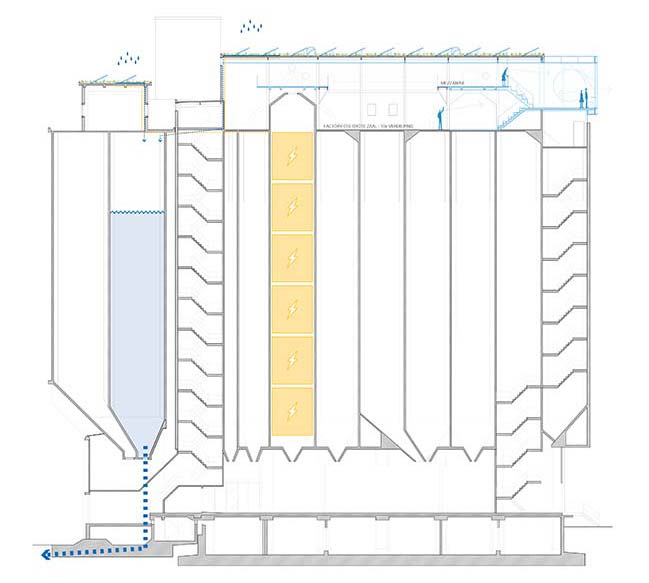 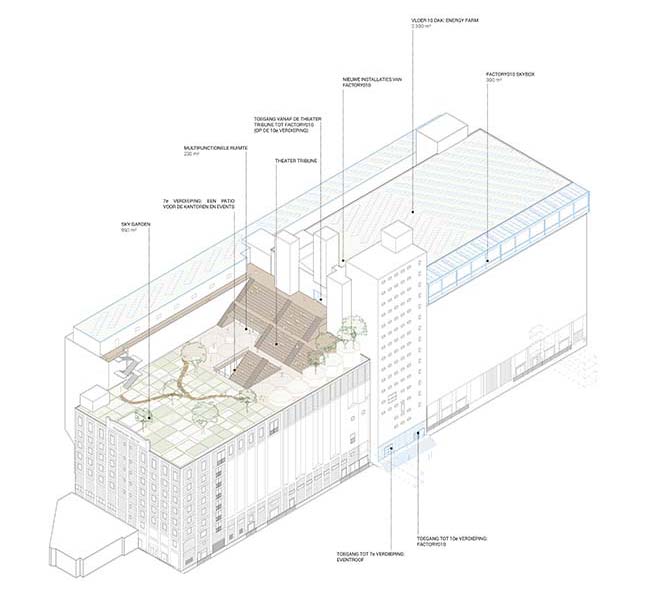 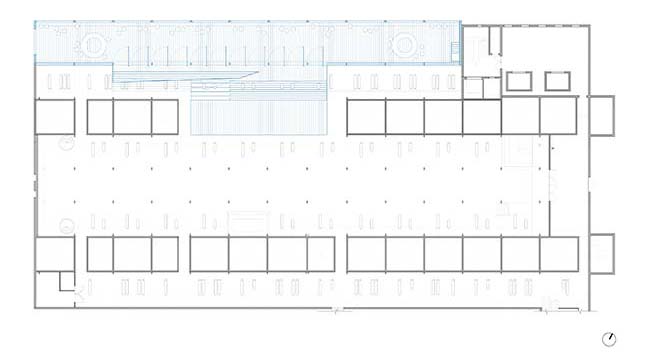 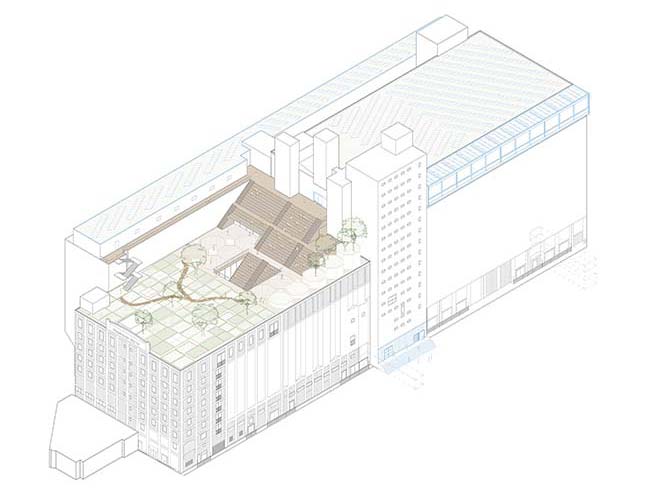 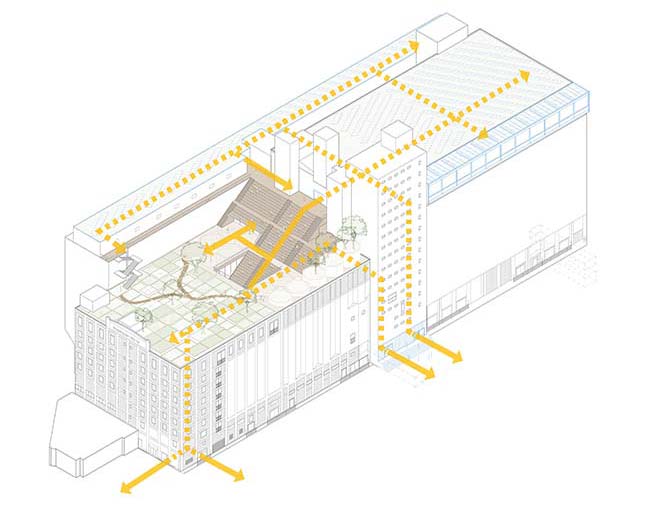 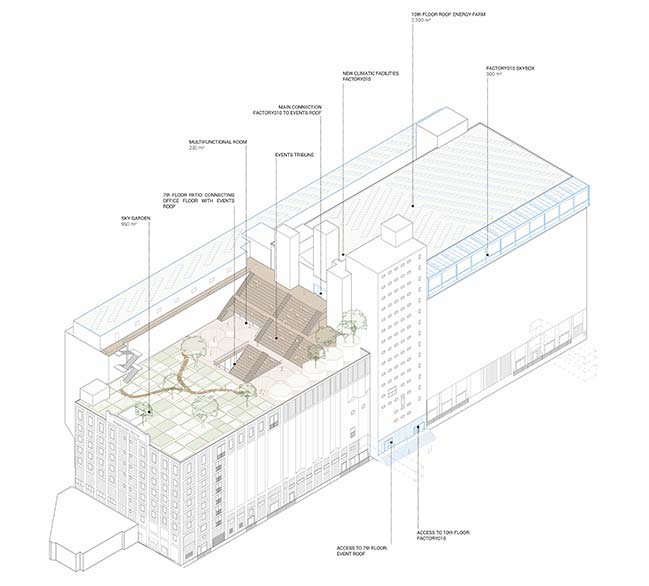 10 / 05 / 2018 JA arquitectura + Groendak proposal was chosen as the winner among 60 other proposals submitted to the contest. It was chosen by the municipality of Rotterdam...