KiKi ARCHi was invited to participate in the design of the Fangzhang Building. ‘Fangzhang’ in Taoism means the place where the immortals live, which is a certain distance from the human world... 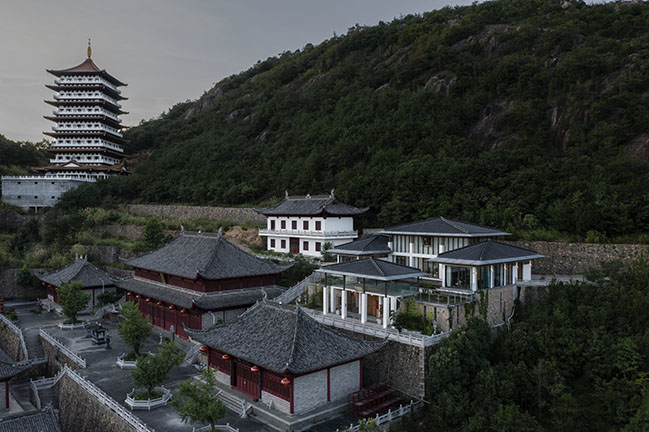 From the architect: The Taoist temple Tongbai Palace is located in Tiantai county, Taizhou City, Zhejiang Province, which is named after Tiantai Mountain. In Chinese ancient books, it was mentioned that ‘There are 8 layers of the mountain, everywhere you look, the scenery is similar. This project is just located in the 2nd layer of the mountain, which means that it is not only the place where the immortals can practice but also the closest one to the human world. 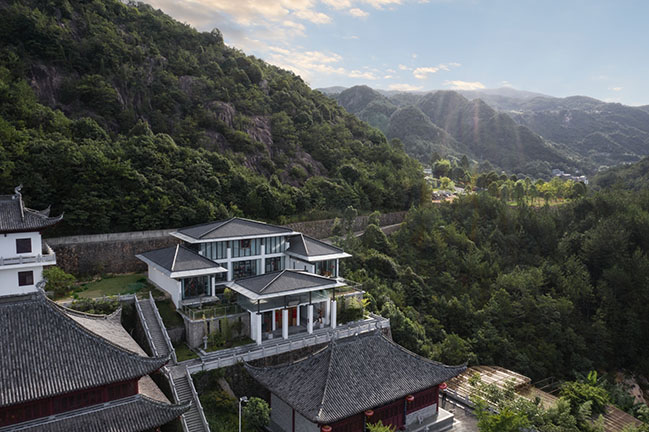 Tongbai Palace is one of the most important traditional Taoist temples in China. When New China was founded, the government decided to build a reservoir to solve the water problem. Since then, this millennia Taoist temple founded by Sun Quan（Three Kingdoms Period）was submerged in the bottom of the reservoir. Today, it is being rebuilt in the direction of the northeast. 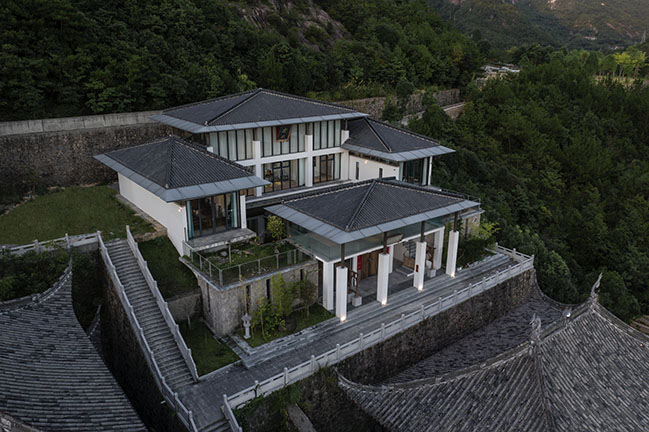 KiKi ARCHi was invited to participate in the design of the Fangzhang Building. ‘Fangzhang’ in Taoism means the place where the immortals live, which is a certain distance from the human world. Therefore, the Fangzhang Building is set up at the top of the whole palace yard, and it is also the place where visitors look up and finally arrive. Different from the solemn main hall, side hall, and the scriptures tower of Tongbai Palace, the Fangzhang Building will be used as a daily practice place for the master. Therefore, how integrating the modern design language based on the traditional style has become the focus of the designer. 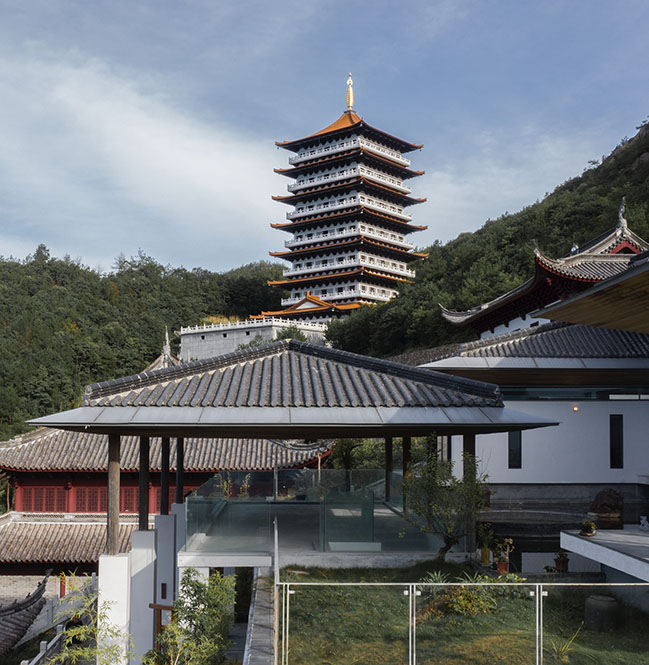 The surrounding natural scenery and Taoist regular life scenes provided a kind of pure beauty when the designer first came here, so KiKi ARCHi decided to use Taoism ‘KONG’ (emptiness) as the guide to express a life attitude of wisdom, and merge it into the space design like the ‘Qingjing Jing’ wrote: ‘For ones able to eliminate desires, when look into their hearts, there is no thought to arise; when they see objects, there is no shape to describe; when they view faraway environment, there is nothing to see; since these three exist no more, only true self to be seen. If one sees emptiness (KONG) without the thought of such emptiness (KONG), will take such emptiness (KONG) to its extreme.’ 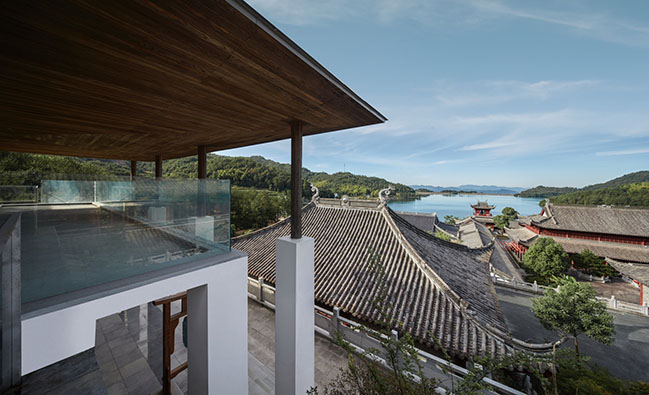 The three-story Fangzhang Building uses concrete and cedar columns as its main structure, combined with stone walls, glass facades, and windows, which change from heavy to light from bottom to top. The vertical columns are infinitely close to the sky, and the roofs in four directions seem to float in the air, which exactly explains the ‘emptiness’ (KONG). It is worth mentioning that the roof design and its shape have been simplified, removing the traditional eaves decoration. The traditional grey tiles are used on the roof, in keeping with the architectural complex, but the details are different. For example, simple steel plates are used at the lower end of the tiles, which are combined with a curved cedar ceiling to form three-dimensional wedge-shaped eaves to avoid direct sunlight. Under the eaves, a large area of glass windows or narrow long windows creates a transparent effect. These contemporary design languages, an abstract fusion of people's minds and Taoist spirits, express the concept of transcending worldliness. 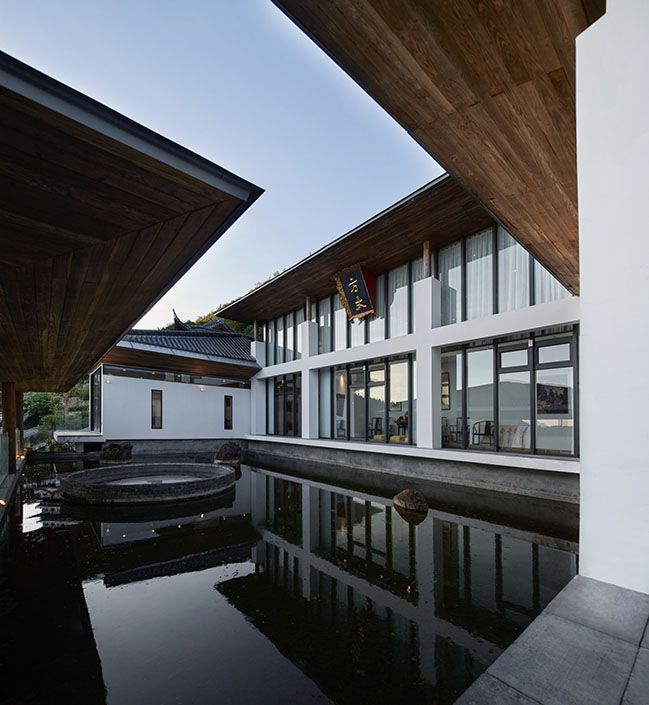 Visitors enter from the ground floor and look up through the circular skylight to see a plaque bearing the word ‘Fangzhang’. The shape of the skylight represents the ancient Chinese philosophy of ‘The round sky, the square earth’. Through the steps to the second floor, there is a viewing platform for meditation with a wide view, which faces the reservoir and is close to nature. The viewing platform is surrounded by glass fences, and its ceiling is splice made of cedar wood in eight directions with eight corresponding spotlights, cleverly responding to the ‘universe’ represented by the ‘eight directions’ in the Taoist concept of space. 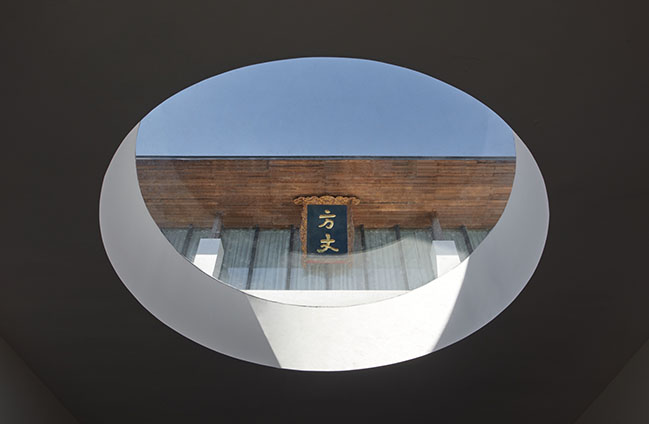 In addition to the natural scenery, the courtyard on the second floor of the Fangzhang Building is specially equipped with artificial landscapes such as water, green plants, bell and drum, which breaks the opposition between the practical architectural space environment and the natural beauty. Morning bell and evening drum, water and wood are full of aura, the space has its freshness and vitality. This landscape also has a certain temperature and light adjustment function. The pool is designed to reduce the heat load on the ground floor, and the circular skylight in the middle introduces natural light into the interior; When the wind blows from the south, the pool can help to cool down and spread the coolness, so that the rooms in the Fangzhang Building can maintain good air circulation without any air conditioning equipment. In addition, the materials used in the Fangzhang Building are all taken from the local area, which not only reflects the gradual cognition of nature but also contains humanistic feelings and the concept of the green building. The organic unity of form and content has been achieved.

In the history of Tongbai Palace in its heyday, there were more than a thousand Taoist priests, and it can accommodate nearly thousands of guests. The site selection of the reconstruction also fully considers location, environment, landscape, humanities and other factors, which have unique historical and artistic value. Because of this, the design and construction of the Fangzhang building are more like a recall of the history, culture and style of Tongbai Palace. Under this historical exposition, KiKi ARCHi tries to outline own understanding of KONG (emptiness) and experience of space atmosphere with a quiet and clear intention through simple techniques and local materials, which are conveyed to users and visitors to explore together. 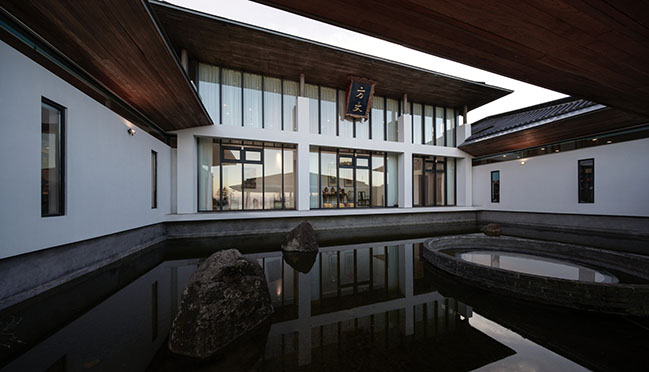 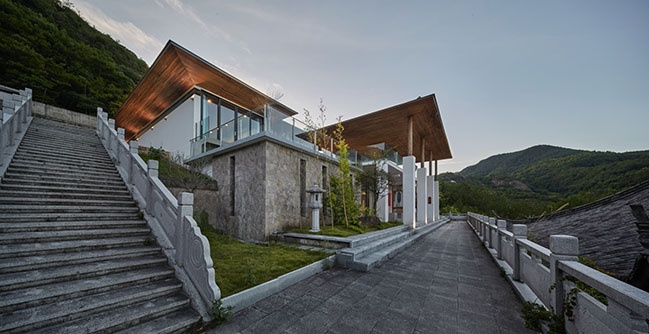 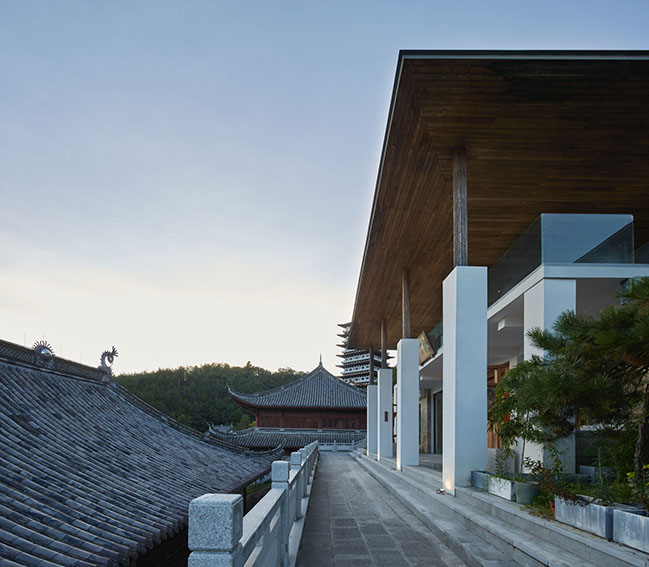 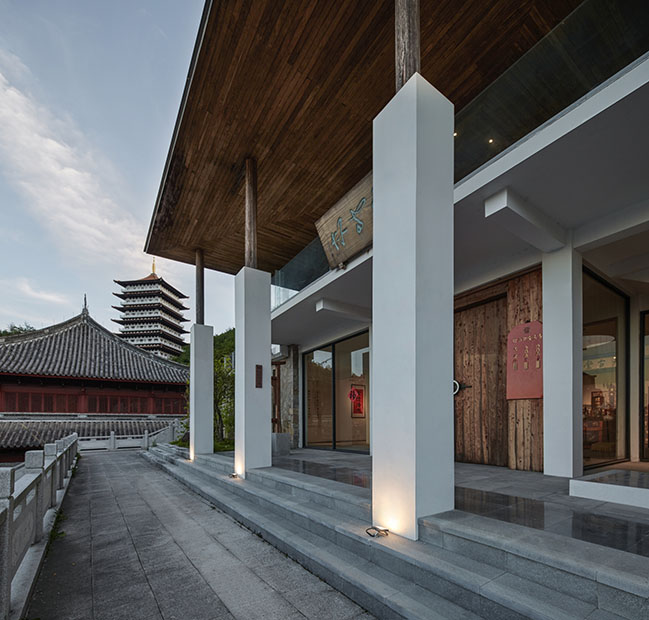 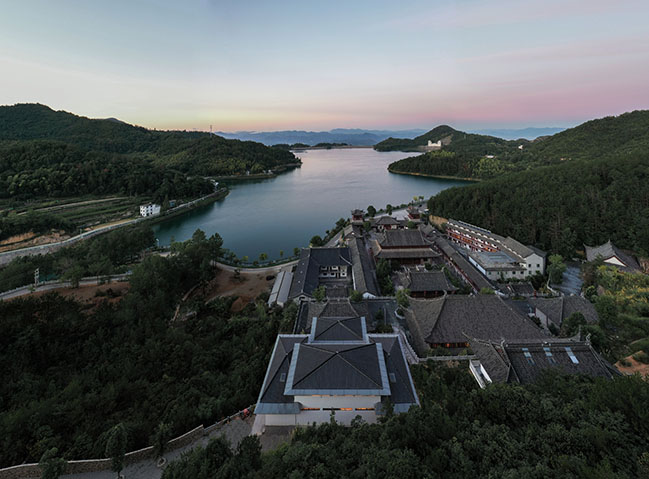 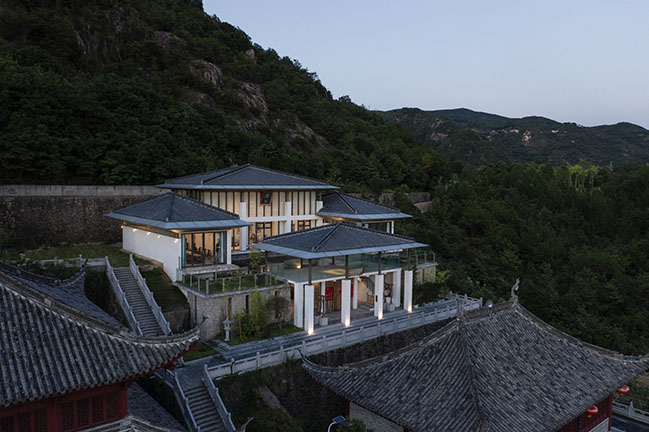 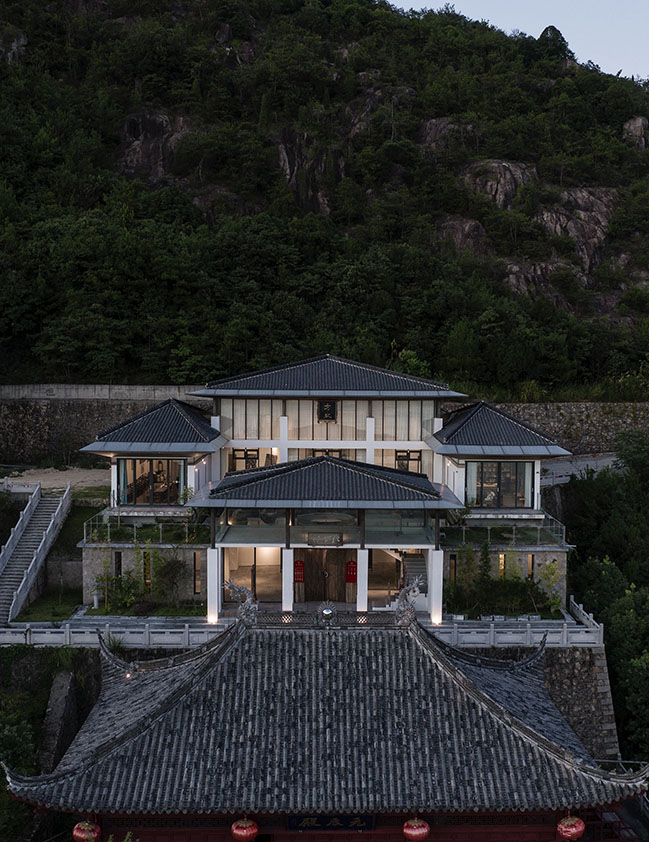 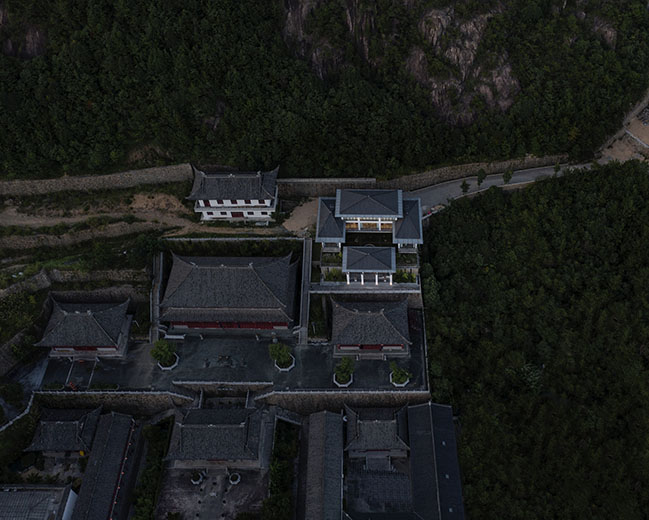 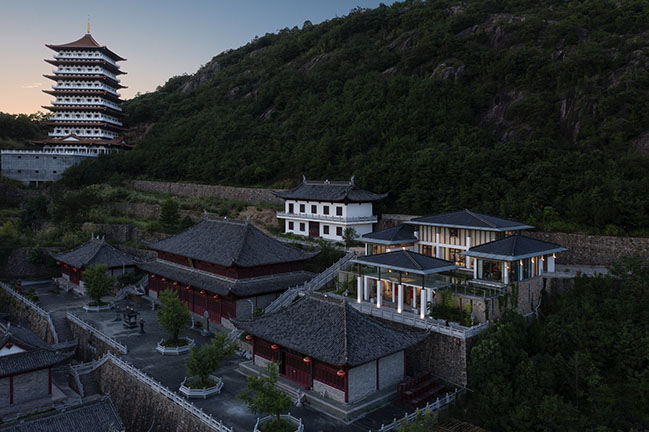 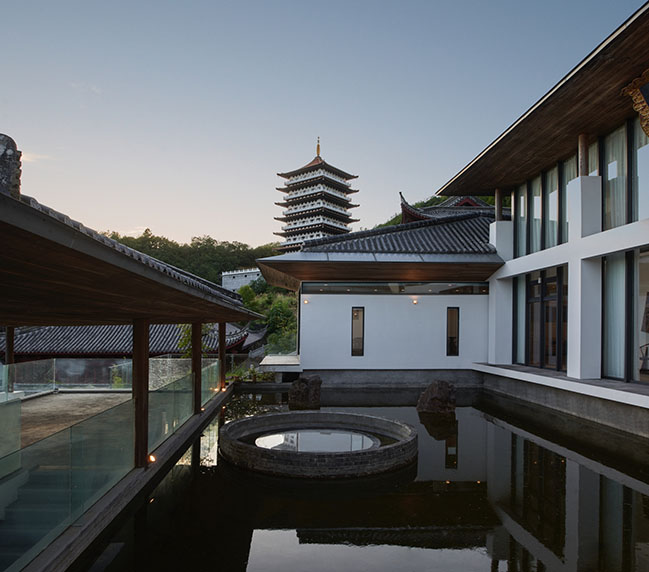 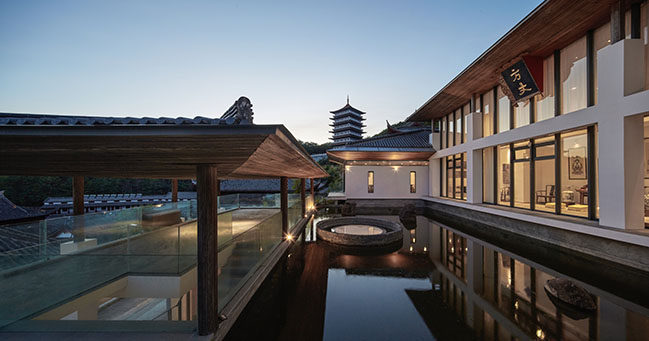 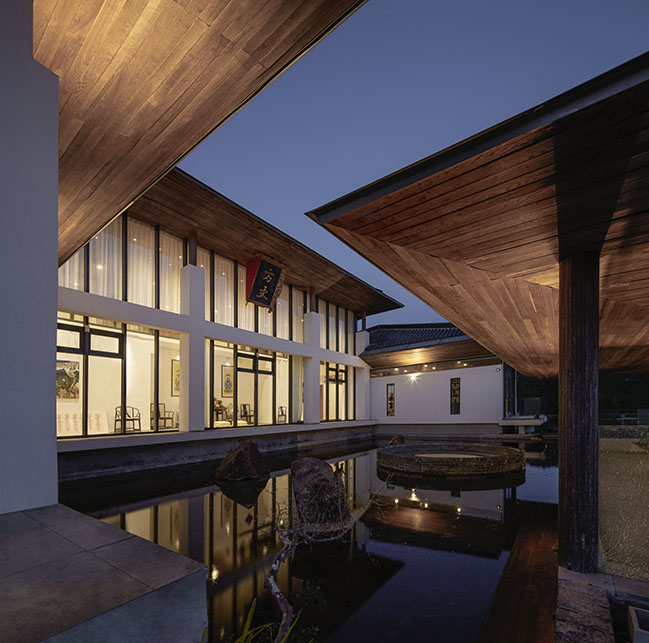 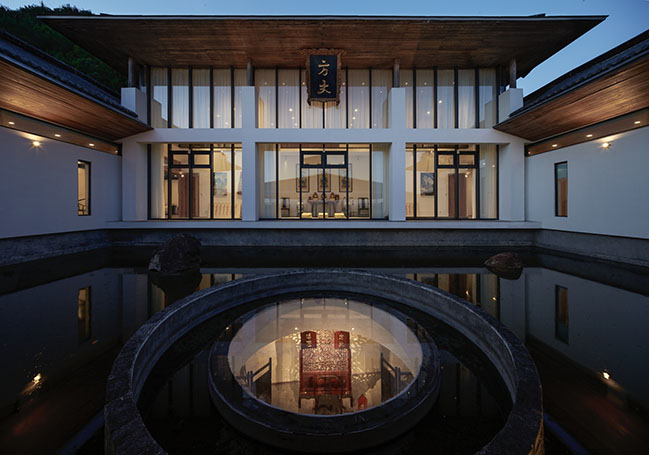 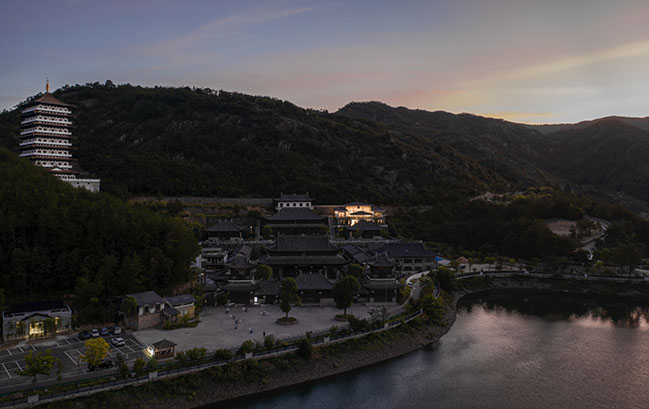 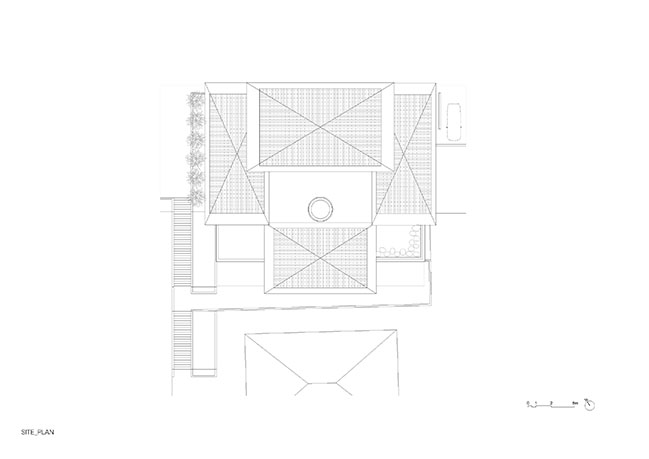 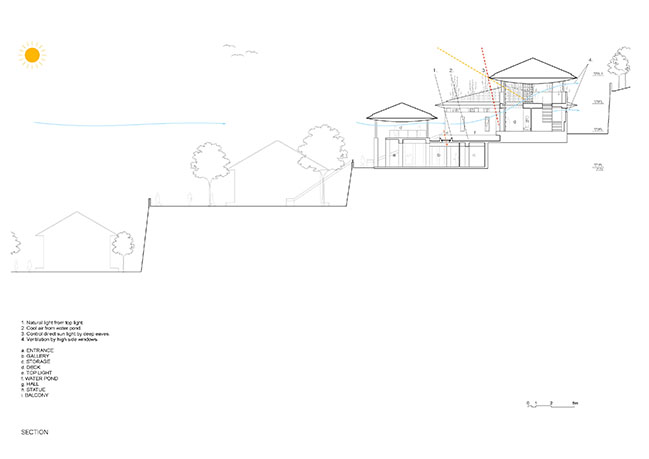 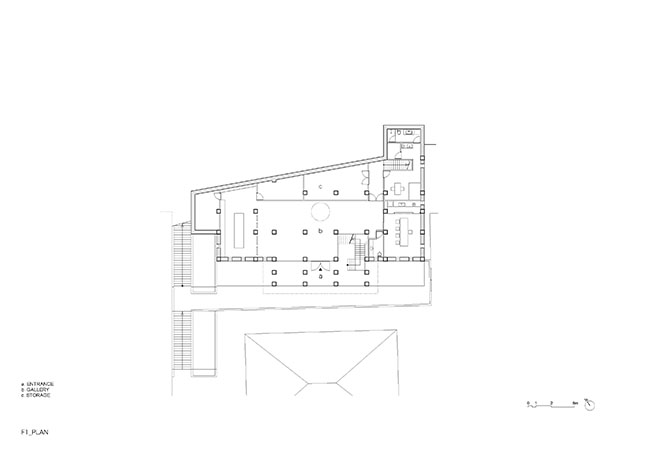 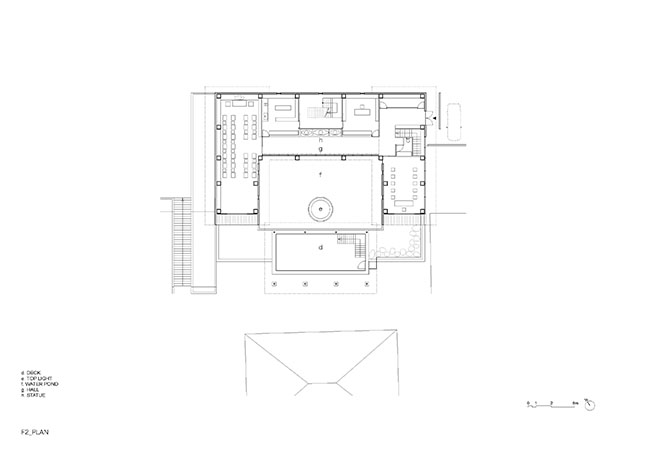 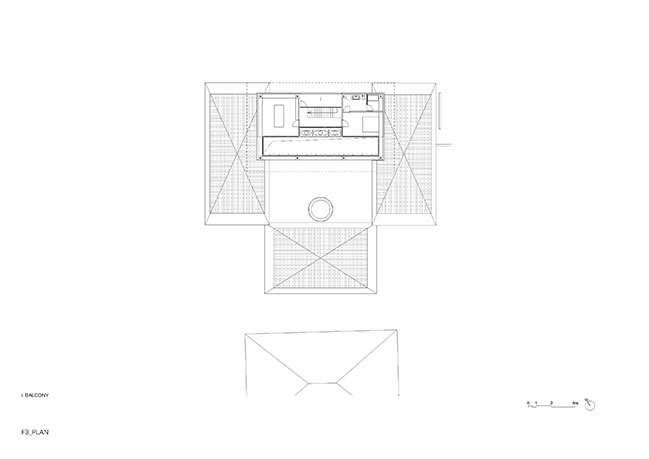 10 / 13 / 2022 KiKi ARCHi was invited to participate in the design of the Fangzhang Building. Fangzhang in Taoism means the place where the immortals live, which is a certain distance from the human world...