Quade: A bookstore in Córdoba by Estudio Montevideo

Located at Paseo Rivera Indarte shopping mall, the second branch of Quade is a bookstore where a unique concept is the leading figure at all times. 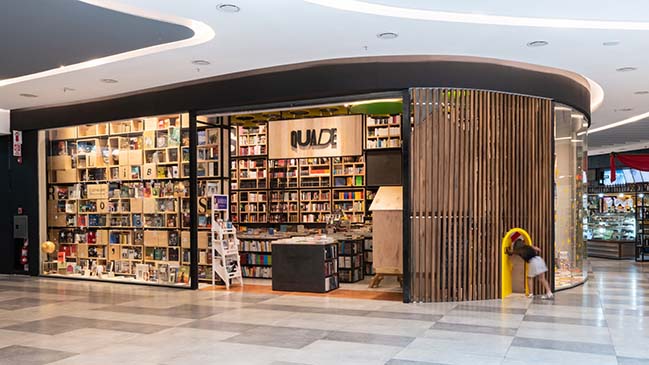 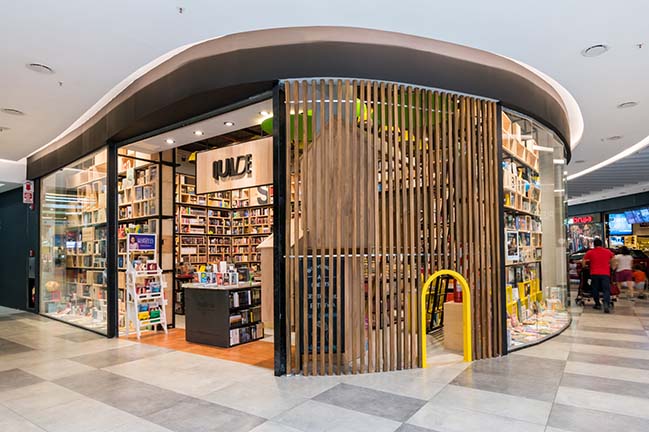 From the architect: Our second branch for Quade, a bookstore selling books. Our proposal was to change the zoning paradigm of the premises. Taking advantage of an approximate height of 5 meters from the ceiling, we thought about distributing the deposit sector in the upper area of the library. In the central zone we generate, where the observer's eye is, a system to show the books in front and, in the lower zone, the children's sector. 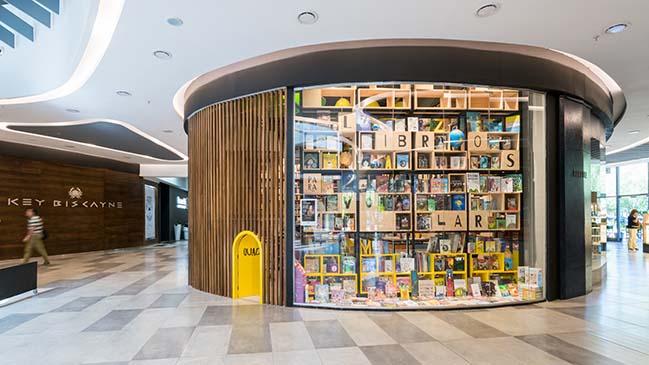 Children’s zone were painted yellow, which creates a path and easy identification of children with their sector. At the same time, we tried to capture the attention of children with a differentiated income in scale and aesthetics. Upon entering through this door, a didactic space for children is presented where a "tree house" is suggested with the aim of giving it a particular identity within the shopping center and as a particular premise for this library. 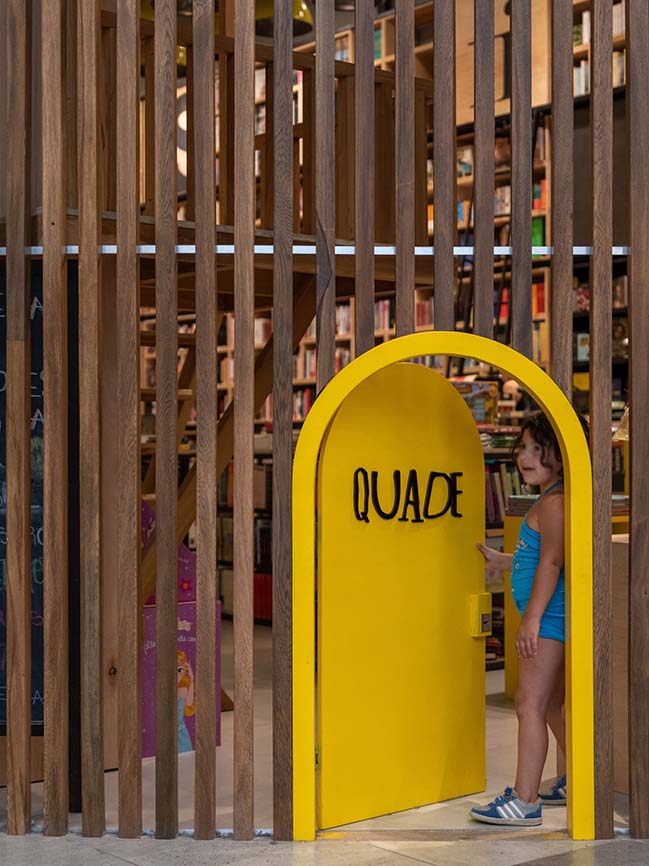 As for the language that was used to make the libraries, the idea was to deconstruct the space with cubes of different sizes that could be combined and generating different exposure situations. 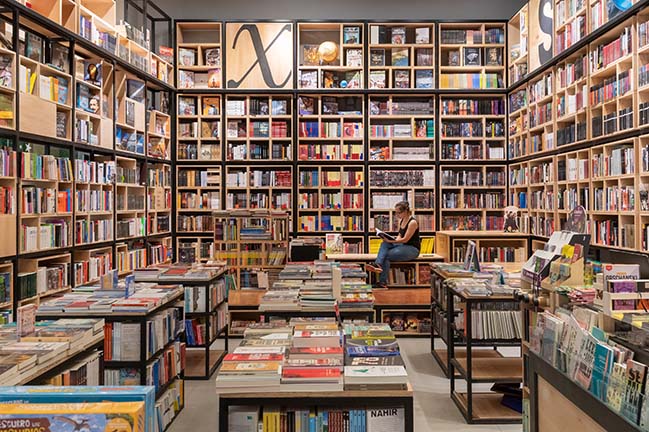 In this project, we work on the concept together with the graphic designer. The origin of the books was sought in the letters and characters, so applications of different typographies and characters were made in the lids of the cubes. To reinforce this idea and generate an icon in the place where people can take ownership and feel attracted, we create a mezzanine for multiple activities of reading, presentation of books, talks, workspace, etc. This between floor also aims to give a greater hierarchy to the premises and at the same time, take advantage of the low staircase, to generate a differentiated sector for diary, notebooks, logs, among others. 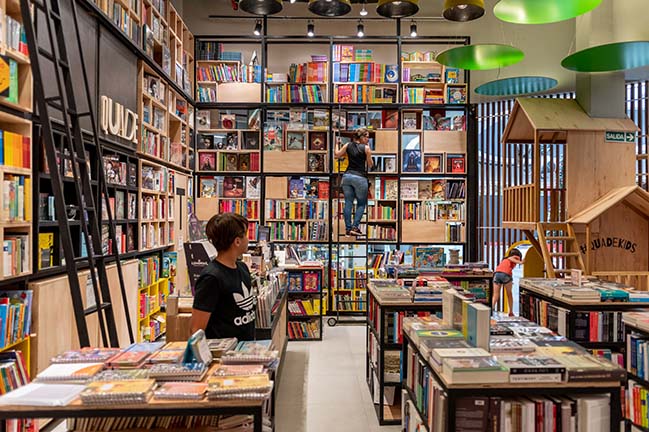 For the area of the box a black color was used to highlight the background as it is a strong place of exposure if we talk about impulse purchase, like the cash desk, which has exhibition spaces for this same purpose. 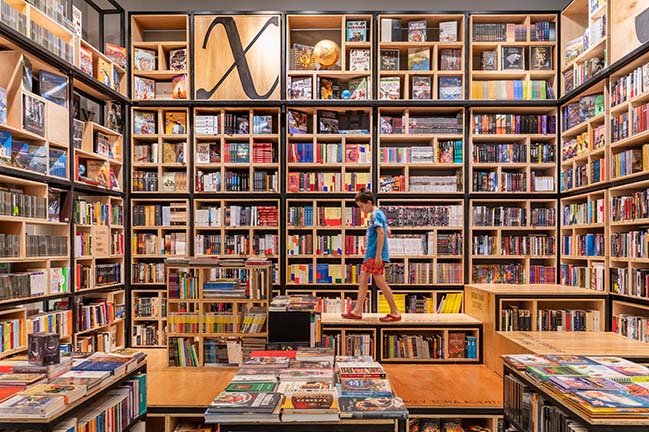 The shop, which closes at night with a curtain, is almost entirely open to shopping. What we wanted to achieve was that it is part of the walk that people make walking through the corridors. Upon entering, a small island was left to communicate latest releases. 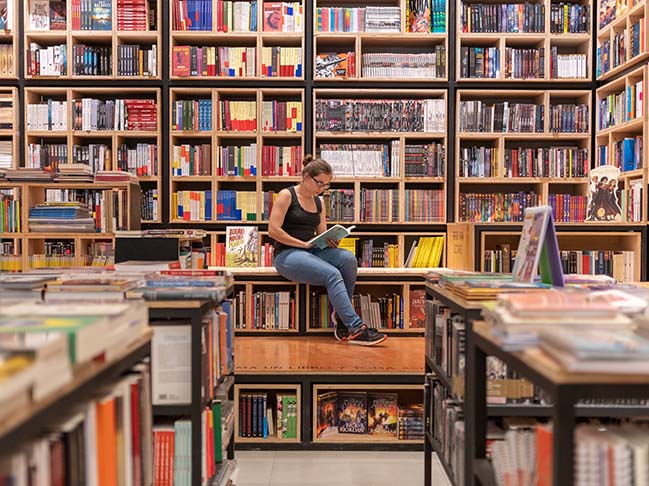 The floor was materialized with modules of micro cement light gray color to generate a contrast with the predominant wood and at the same time, a dialogue in the tonality of the textures and colors.

The signage was solved with the same materials of all the libraries and islands and was hung in the entrance with corporeal letters so that it was part of the context. The children were also taken into account; it was generated, with another typography more infantile and to the height of them, a poster of yellow letters. In conclusion, the goal was to achieve with a single strong gesture, which is a library of 5 meters high that covers the entire program and turns the whole premises even to the window, an impact and a need to get to know , in conjunction with a strong intervention for the children's sector that gives a particular identity to the premises. 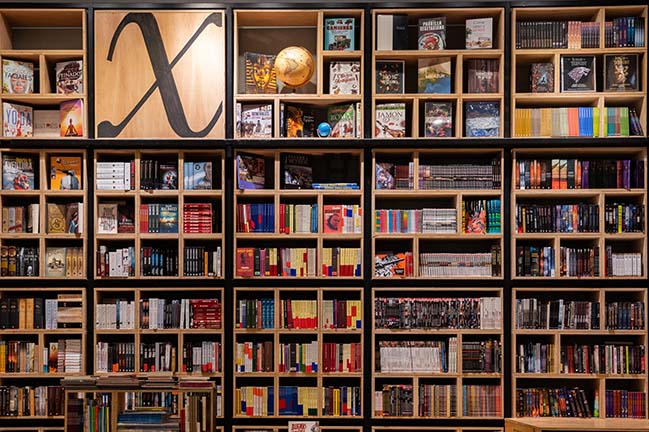 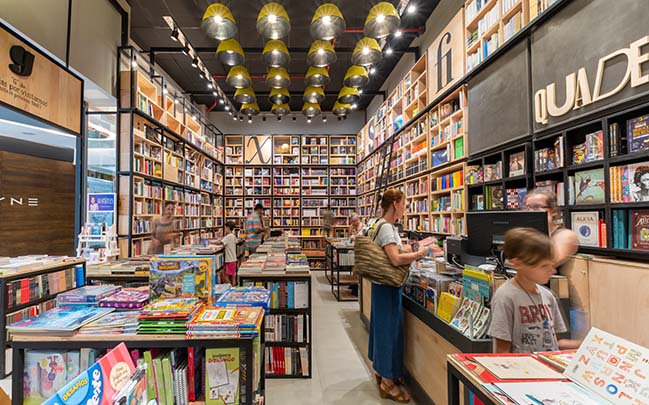 YOU MAY ALSO LIKE: White Comedy of Xi'an Zhongshu Bookstore by Wutopia Lab 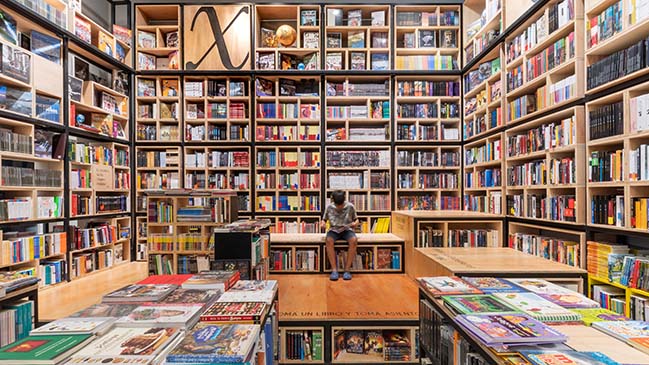 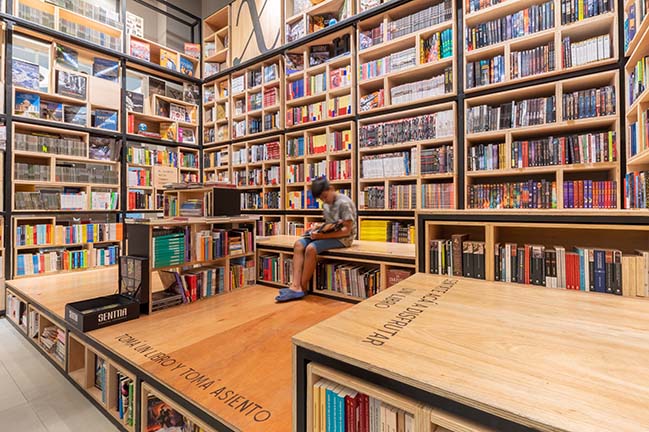 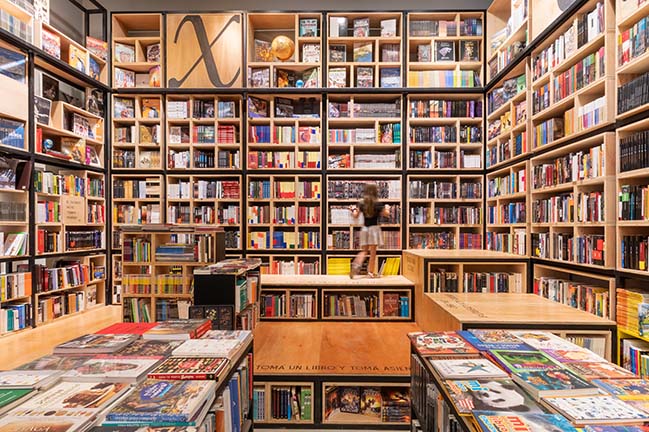 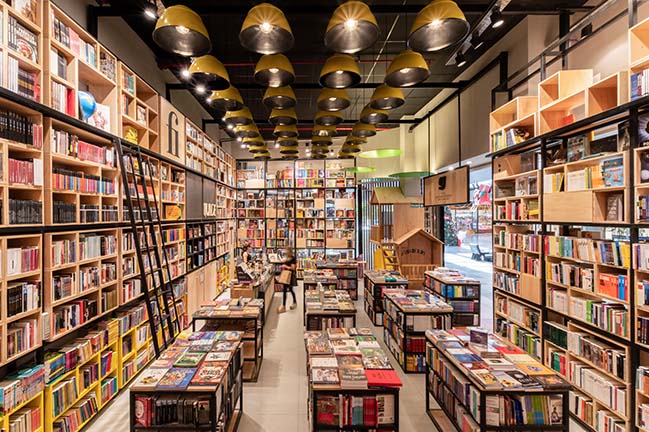 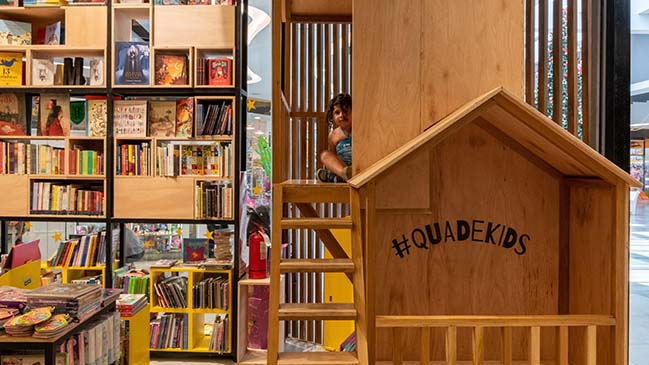 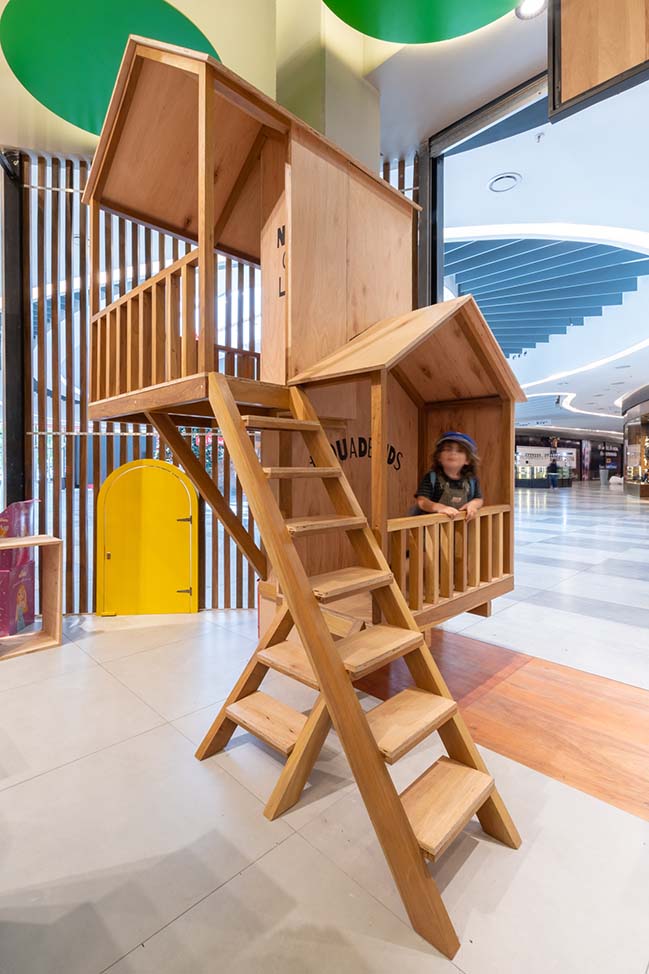 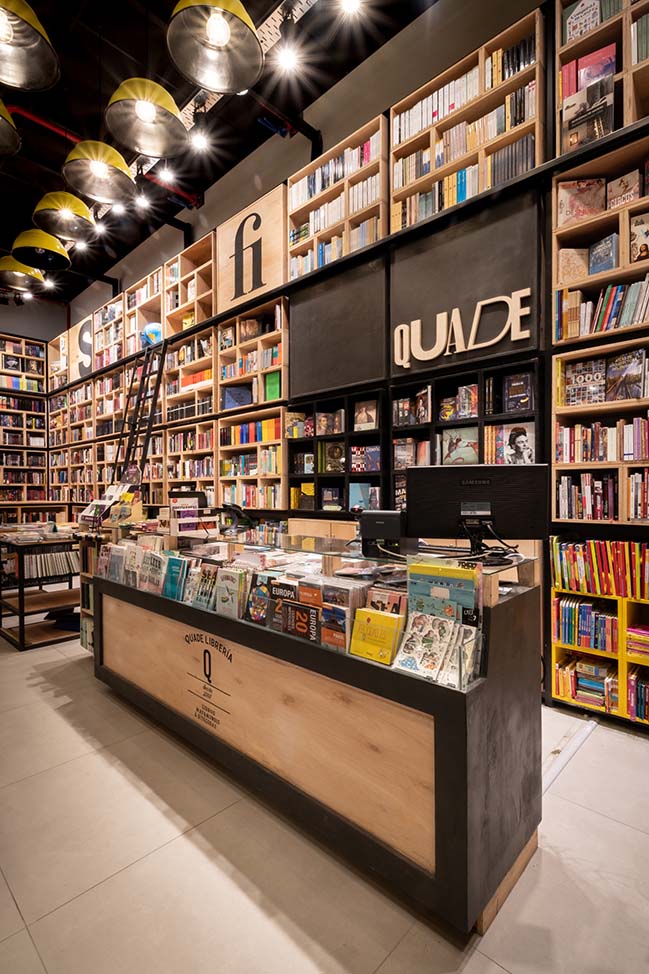 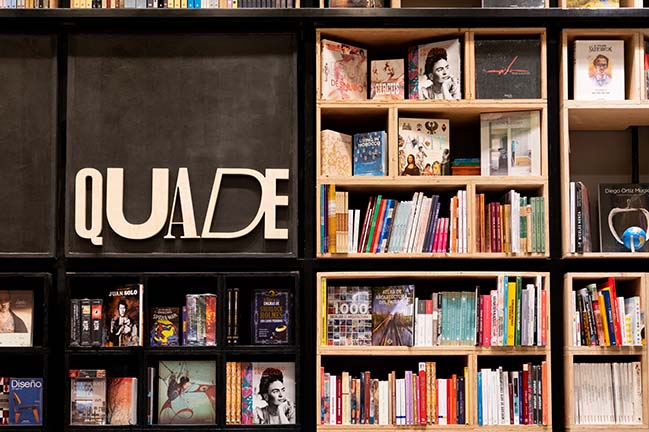 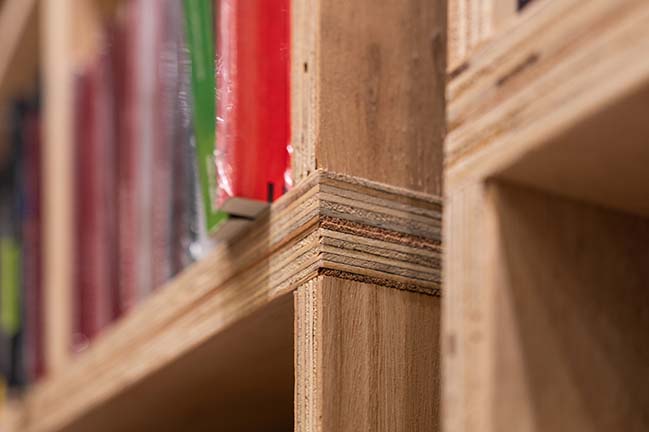 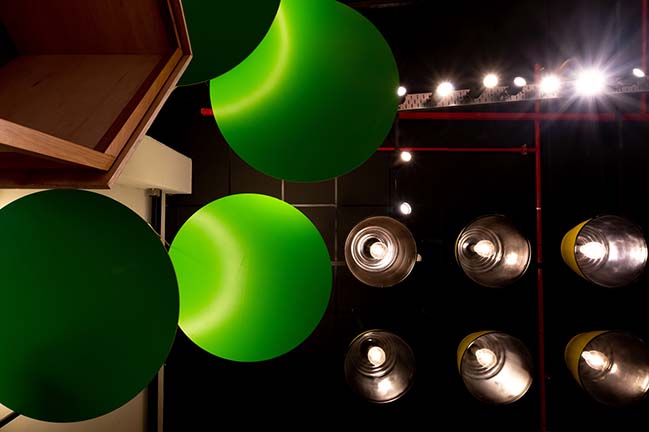 Quade: A bookstore in Córdoba by Estudio Montevideo

05 / 27 / 2019 Located at Paseo Rivera Indarte shopping mall, the second branch of Quade is a bookstore where a unique concept is the leading figure at all times