Pierattelli Architetture presents a project for the new stadium of Fiorentina Football Club, together with a Masterplan able to upgrade the urban scenario of the city and offer new spaces and infrastructures... 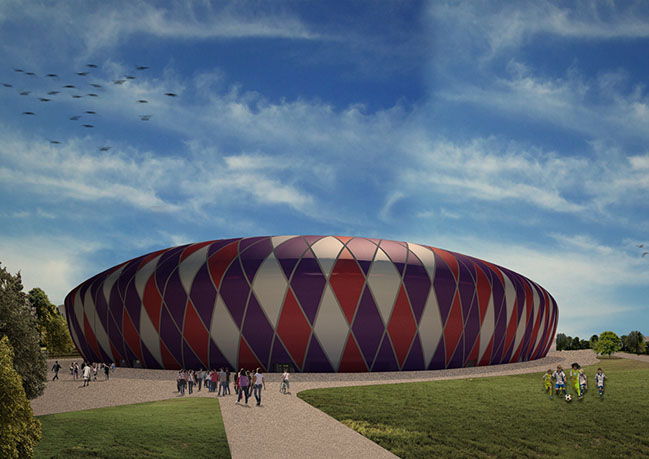 From the architect: The stadium of Fiorentina Football Club based in Florence (Italy) is a building of historical and artistic interest, built between 1930 and 1932. The Club belongs now to a new chairman, Rocco Commisso, an American-Italian businessman, which has put the need of a modern sport infrastructure as one of the strategic pillars of the club. 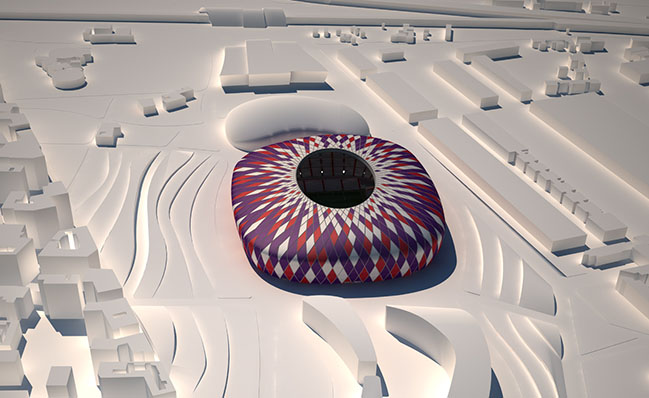 In the public debate of the future of the old stadium, comes the proposal of the Florentine Studio Pierattelli Architetture, which has designed a project for the new Fiorentina football ground with a hallmark organic form and a metal mesh cover in the club’s colours – purple, white and red.  The project takes the form of a Masterplan covering the redevelopment of an expansion area in the north-west of the city, Novoli’s district, and it would become a sign of renewal, growth and urban expansion. 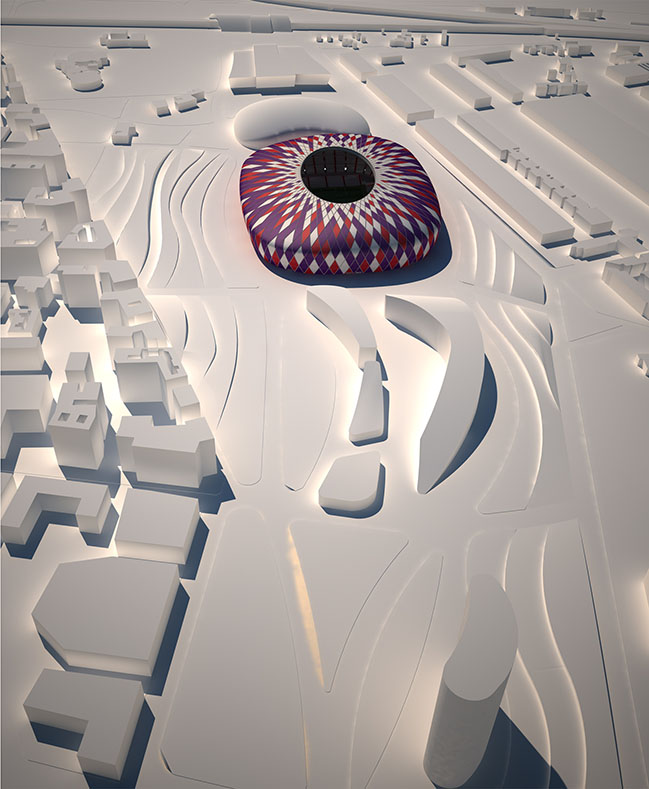 The project for the new stadium thus becomes an opportunity to upgrade the urban scenario of one of the most vital areas of the city. It redefines the relationship between architecture and context, resolving other critical issues weighing on the area through the arrival of the stadium. 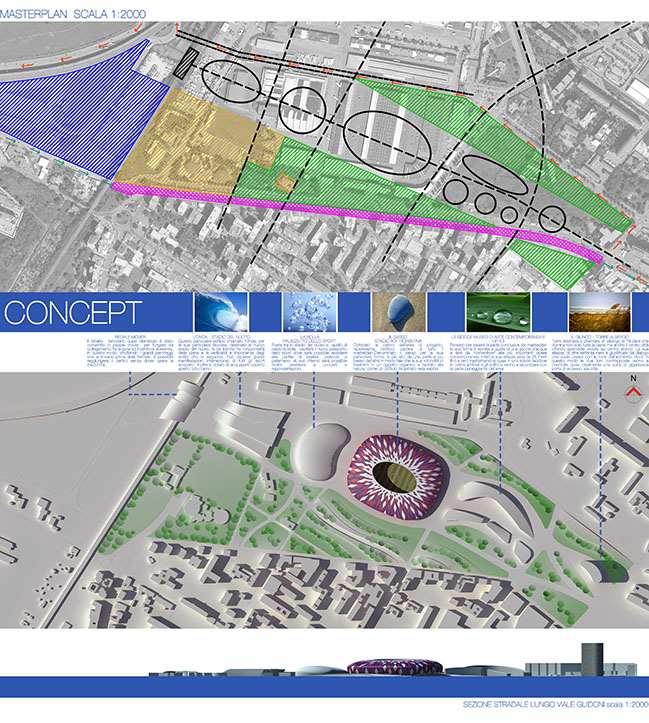 In fact, this also provides the opportunity to renovate the road network which is noteworthy today for its major infrastructural failings, redressing the balance and creating a new one with the Mercafir (the Florence fruit and vegetable market).  The construction of artificial hills completes the project of creating a living, usable architecture with services always open to citizens. 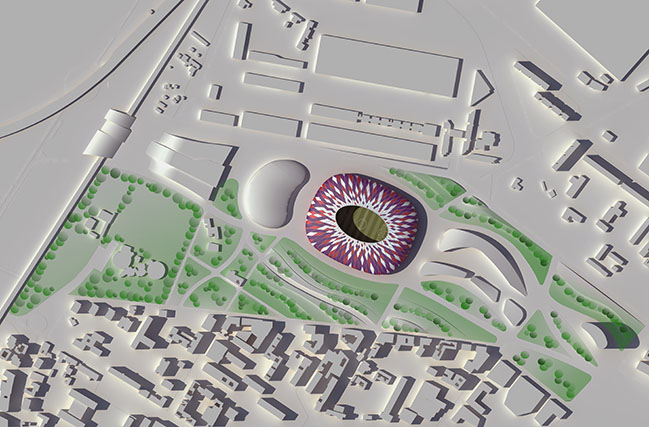 With its hallmark organic form, the particular conformation of the stadium, higher on one side than on the other, brings to mind a "Stone".  A metal mesh in the club’s colours, purple, white and red, covers the outer structure.  16 entrances, 4 of them with turnstiles, with lifts and panoramic stairways, give access to 3 rings of grandstands, as well as to the shopping mall and catering area which are always open to the public. 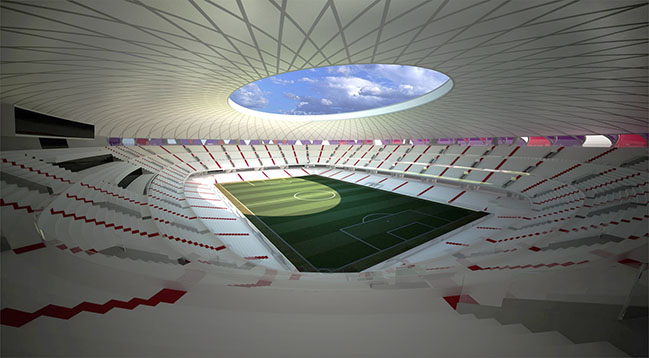 “The new stadium project certainly provides a unique opportunity for Florence”, says architect Massimo Pierattelli, “for rethinking the relationship between the building, its functions and the city, adding new meaning to the structure and creating added value for citizens, as well as for fans”.

The new stadium designed by Pierattelli Architetture is therefore not only grafted on to the existing urban fabric, but becomes part of a new vision of the city, able to combine different functions and leaving areas that are active all year round as a legacy. A holistic vision of the relationship between architecture, urban planning and social life, able to optimise the relationship between city life and sport. 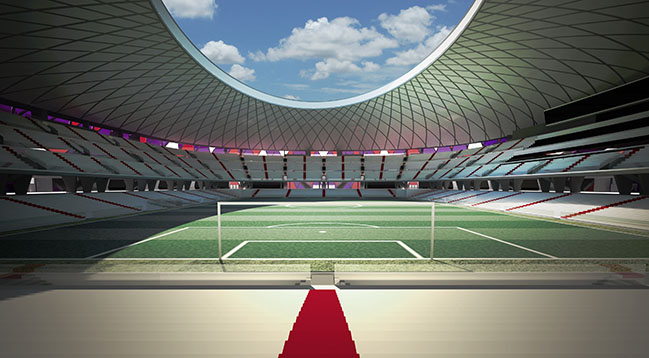 “The Stone”
The stadium project proposed by Pierattelli Architetture stands out for its special, almost organic silhouette, and its curved steel surface with rhomboidal metal mesh design. The colours of the surfaces are those of the team: purple, white and red, with a slight transparency that allows a glimpse of the distinctive elements of the stadium even from the outside.  The coloured mosaic is initially characterised by a strong predominance of purple, up to the roof where white prevails: viewed from overhead, the entire structure brings to mind an enormous flower. 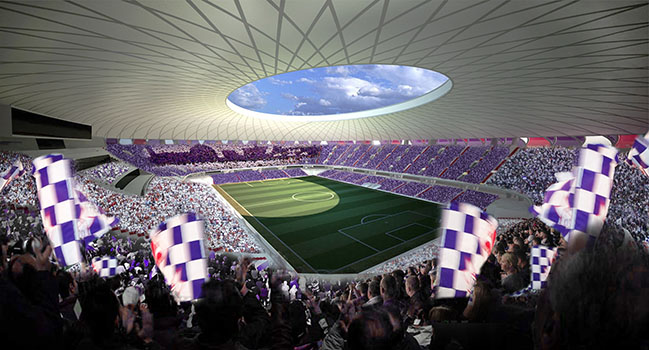 With its perimeter of about 600 metres, a maximum width of over 200 metres and a maximum length of over 150 metres, the stadium has a capacity of 40,000 seats. The height of the structure varies from 30 to 40 metres: the highest part, overlooking the grandstands, is located in front of the new entrance and is designed to accommodate the journalists’ grandstand.

The facility has 16 different entrances with panoramic stairways and lifts: 4 are equipped with turnstiles for sports events and are therefore usable exclusively during such events.  The main entrances, located on the main axes, allow access to a double-volume ring at ground floor level that runs along the entire length of the floor and channels the flow of people into the different areas. The project includes facilities that are always open to the public, such as the double volume shopping mall and the restaurant with panoramic terrace. 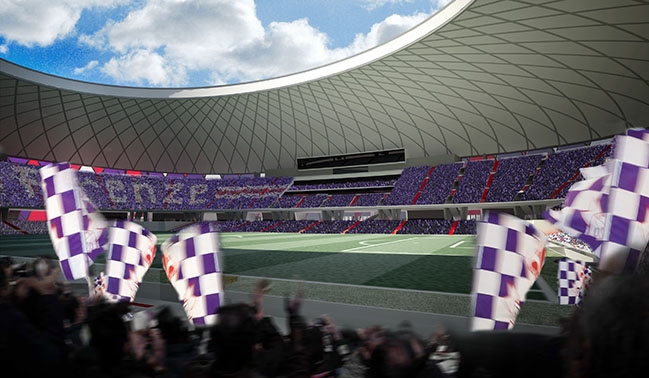 An area at the centre of the second ring is dedicated to VIP grandstands, 10 skyboxes of 16 square metres each and four equipped meeting rooms for market or executive summits. This area is accessed exclusively from the panoramic stairways to the north.  The last ring dominates the entire stadium and, to point up the gap between the stands and the roof, does not house services, but only the dividers and columns that support the internal structure.

The underground part of the stadium is given over to facilities: changing rooms for stewards including swimming pool, warm-up area and wellness center, as well as a large hospitality area from which the press room, skybox areas, VIP grandstands and toilets can be accessed. 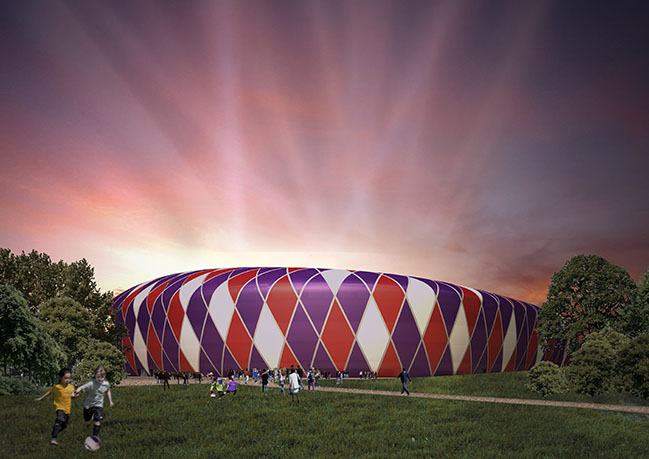 The new Masterplan
The surface area of about 60 hectares in the Novoli neighbourhood, in the north-west of the city, is home to a very active, dynamic urban network, where however a significant lack of infrastructure seriously limits its role and potential.

Starting precisely from the assessment of the limits and criticalities of the neighbourhood, Pierattelli Architetture has based its project on the upgrade of the road network that develops around the Mercafir area. Viale Guidoni – along which most of the traffic in and out of the city currently flows - is directed underground through a tunnel with an entrance close to the railway and exit in front of the Palace of Justice, changing to a one-way direction of travel and maintaining a pedestrian and cycle path at ground level for the inhabitants of the neighbourhood. A road has been added to the north of the area that connects today’s Piazza Artom with Via dell'Olmatello, cutting the Mercafir area in half. The latter is retained, but scaled down with a view to optimising spaces and resources: the area becomes entirely pedestrian, an island of peace within an area of inter-municipal traffic.

Down the long sides of the project area, it was decided to create 4 artificial hills, to mark the boundaries of the area, while at the same time providing a new green lung for the city. The hills have a maximum height of 6 metres. Live architecture enjoyable on an everyday basis, they are positioned in such a way as not to represent a visual obstacle. 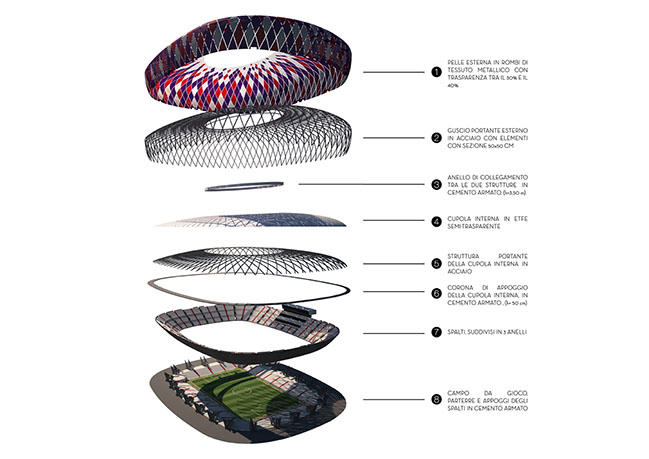 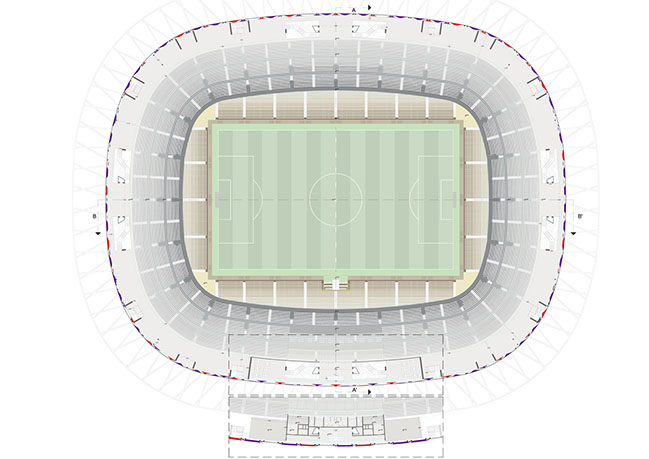 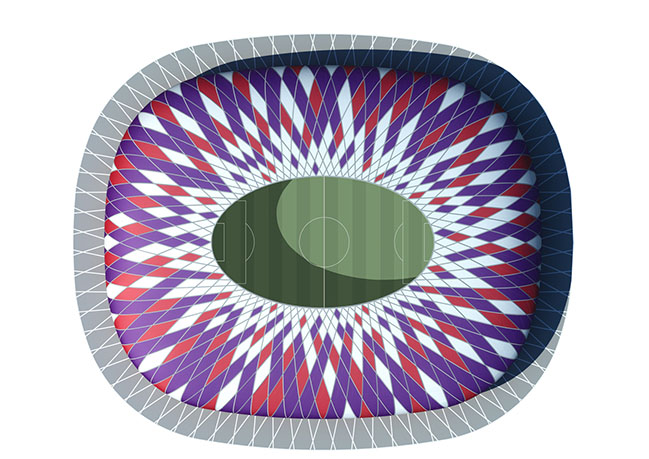 12 / 09 / 2019 Pierattelli Architetture presents a project for the new stadium of Fiorentina Football Club, together with a Masterplan able to upgrade the urban scenario of the city... 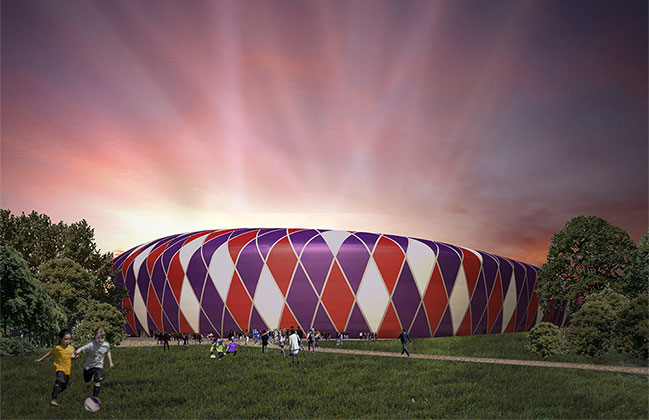 Recommended post: How to decorate a small apartment 28m2