The Red Mountain Resort is a spa and wellness retreat in Iceland that offers guests a sensory escape into the void of the breath-taking Icelandic nature and simultaneously invite them to embark on a journey of self-discovery.

Project's description: Captured by the mystique and mystery of the Icelandic landscape, where, according to local mythology, ‘invisible people’ and ‘half-men, half-trolls’ are believed to roam, Johannes Torpe Studios has designed a resort for the modern spiritual traveler.

Situated on the Western peninsula of Snæfellsness, at the point where the river mouth runs out to the sea, the resort faces ‘Snæfellsjokull’, a majestic glacier covered stratovolcano. The mountain is home to the Icelandic saga about Barður Snæfellsás, who is said to have left the chaotic world of men behind to live in solitude.

The resort is designed to invite guests on a journey of self-discovery, just like that of Bárður Snæfellsás. The journey is facilitated by an architectural concept that explores the interplay between nature and architecture, and their combined capacity to provide the necessary triggers for an inward journey.

The architecture is hence designed so as to expose the guest to nature in various ways. Numerous panoramic views remind guests of nature’s presence; her power and her fragility, her hostility and her warmth. Sky courtyards enclosed by glass panels invite the rocky landscape inside, while the lagoon literally flows through the reception, blurring the line between outside and inside.

We explored the tradition of Icelandic turf houses built by the first Norwegian settlers, experimenting with ways of creating a modern interpretation. The emerging idea was to turn the construction inside-out. Turf houses are wooden structures insulated by a thick wall of turf - in other words, a light structure with a very heavy base.

We inverted this structure by creating a heavy concrete structure enclosed by a light base of glass. As a natural extension, the relationship between positive and negative space has been explored, and throughout the building there is a clear contrast between light-weight and more heavy building volumes.

Concrete is chosen as the primary material and is treated with a red pigment that mimics the hue of the surrounding landscape. The concrete is applied to create layers of contrasting rough and smooth textures and form patterns inspired by those found in the layers of the turf houses.

Selected parts of the rooftops are covered with grass like the traditional building techniques of the area. This both intensifies the notion of a building that is closely related to the history of the site, and adds to the sense of a hidden destination that discreetly rises from the landscape.

Drawing from the rich heritage of Icelandic Folktales, a sense of surrealism and the concept of imaginary realms is additionally infused into the space. The use of reflecting glass on the building’s exterior creates a mirror effect, evoking the illusion of a building that disappears into the landscape. Portals and tunnels are additionally dispersed throughout the building to enhance this otherworldly and magical atmosphere.

The spa is the heart of the resort and the centre of the transformational journey found in the saga of Barðar Snæfellsás. Key emotional states experienced by him on his journey towards a new-found purpose in life are instilled into the space through various expressions of nature. The spa takes the guests through five emotional states: Contemplation, exposure, confrontation, clarity and enlightenment. The element of steam is a motif in the spa that symbolises the fog that arises in the saga every time Barðar experiences an emotional change. Other natural elements are further captured to create wind tunnels, fire baths and ice pools that represent the unpredictable extremes of Icelandic weather.

The resort’s outdoor lagoon is designed to look and feel like a natural extension to the nearby river. It is outlined with shallow passages, areas with currents, and still water pools. The further one moves through the lagoon the more one is rewarded with solitude and the opportunity to become totally immersed in nature. 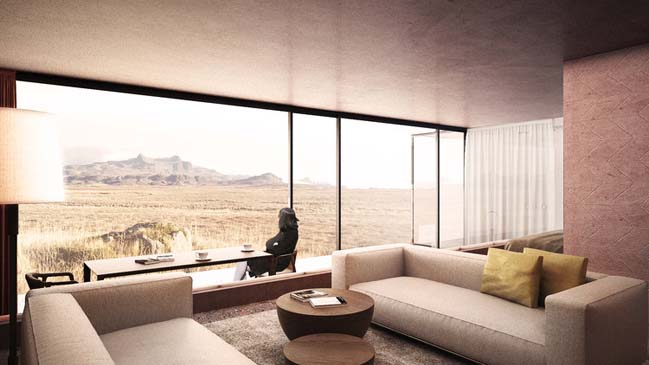 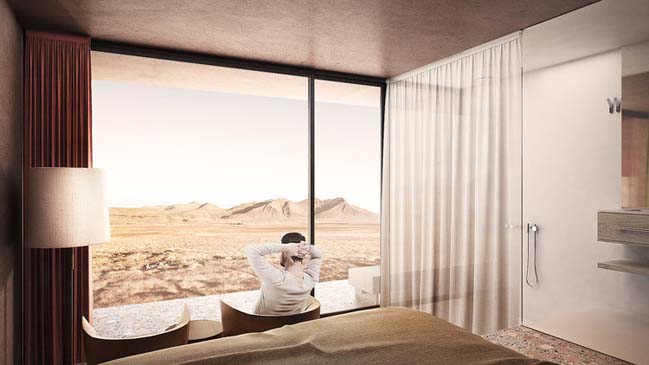 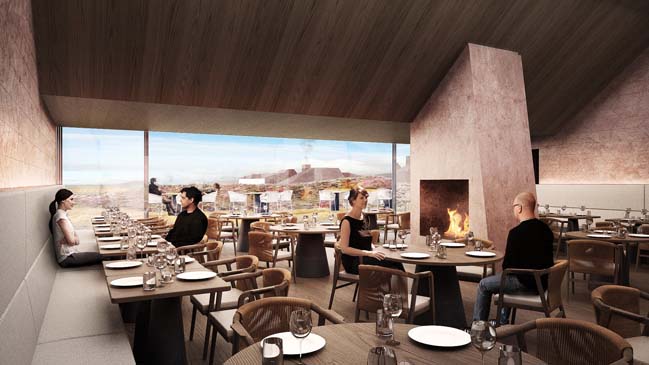 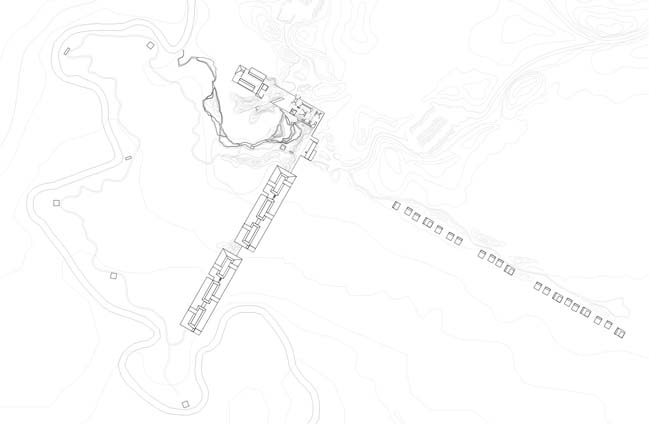 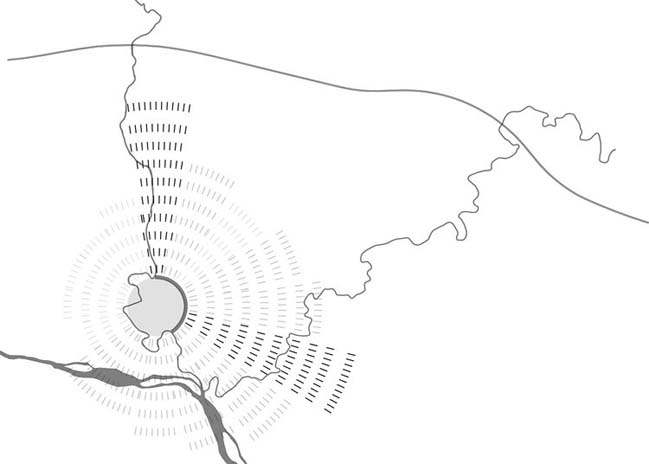 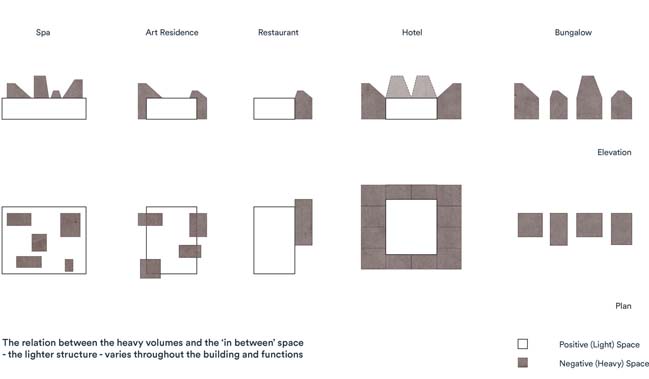 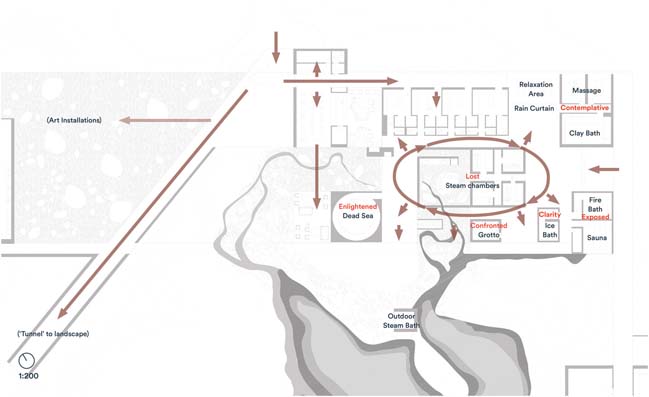 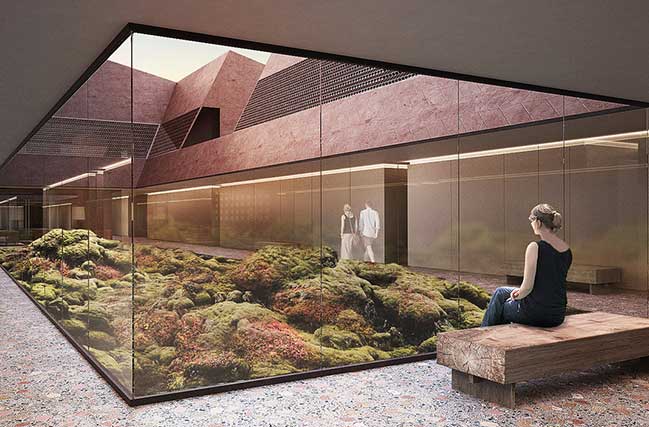