French ecological architect Vincent Callebaut has won a competition to redesign ancient thermal baths in the Savoyard town of Aix-les-Bains, France. The project dubbed "The Foam of Waves", by Vincent Callebaut Architectures, has come out ahead (62.89%). 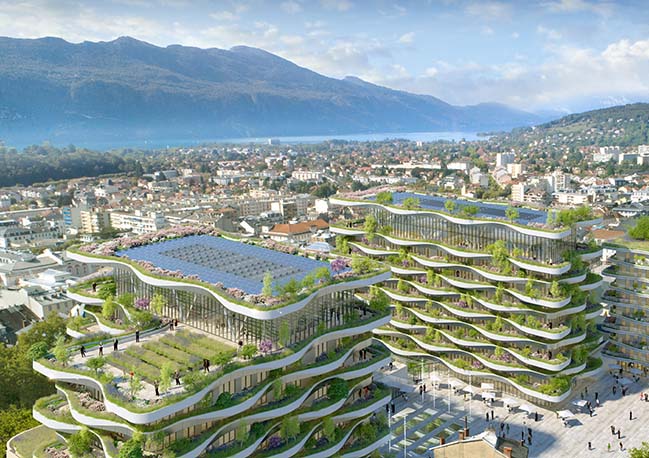 The Metamorphosis project of the "New" National Baths began with a crush between the architect of the flat country (Belgium) and the majestic landscape of Aix les Bains nestled between lake and mountains. In front of this iconic site, the "Vincent Callebaut Architectures" team wanted to respond with ambitious and contextual projects aimed at enhancing the heritage (cultural and natural) and reclaiming the city center. 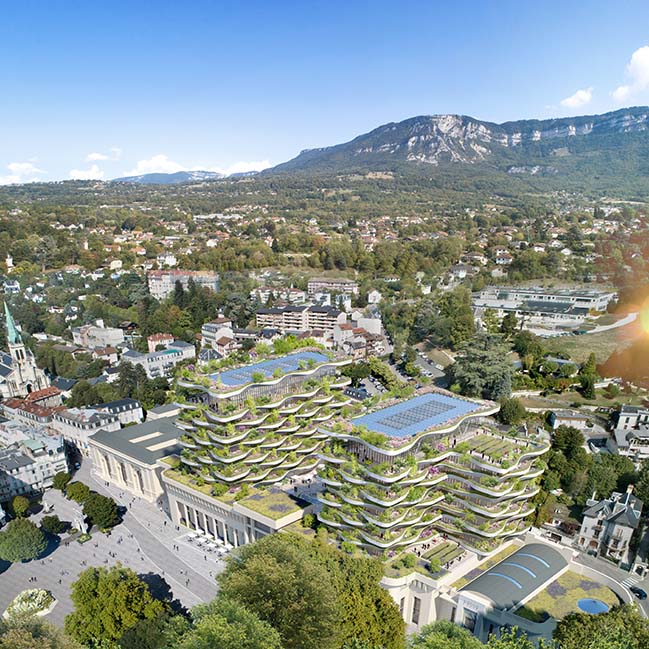 The whole architectural project is the carrier of the new paradigms of our society. It offers future residents and visitors the opportunity to adopt new lifestyles that respect the environment, health and urban well-being in order to simply live better. It is a resilient architecture, innervated by nature. It is an ode to biodiversity, renewable energies and the circular economy that advocates the construction of post-carbon, post-fossil, post-nuclear and even post-insecticidal cities. 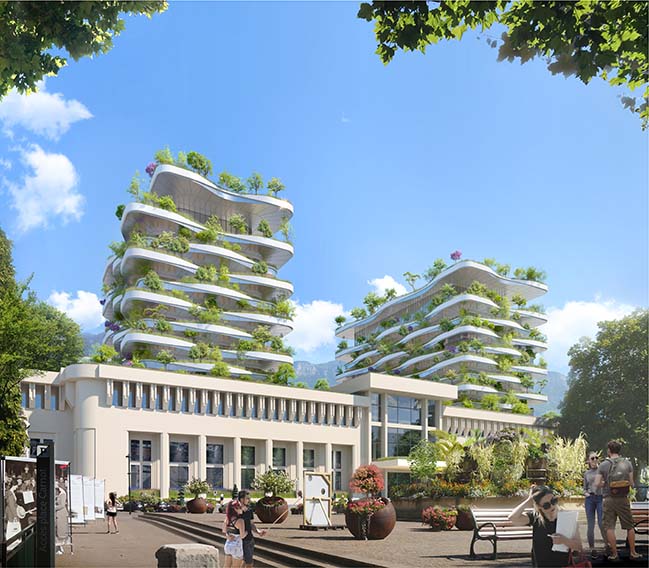 The scenario (low project) presents a project whose height is calibrated on the current size of the Queen Hortense Hospital. The Foam of waves presents a low project whose last inhabited floor is 28 meters from the reference level represented by Place Georges 1. The buildings are thus classified in the third family according to the fire regulations in force.

This project entitled "the Foam of waves” takes its name and is freely inspired by the famous poem "The Lake", Meditations XIII of Alphonse de Lamartine. 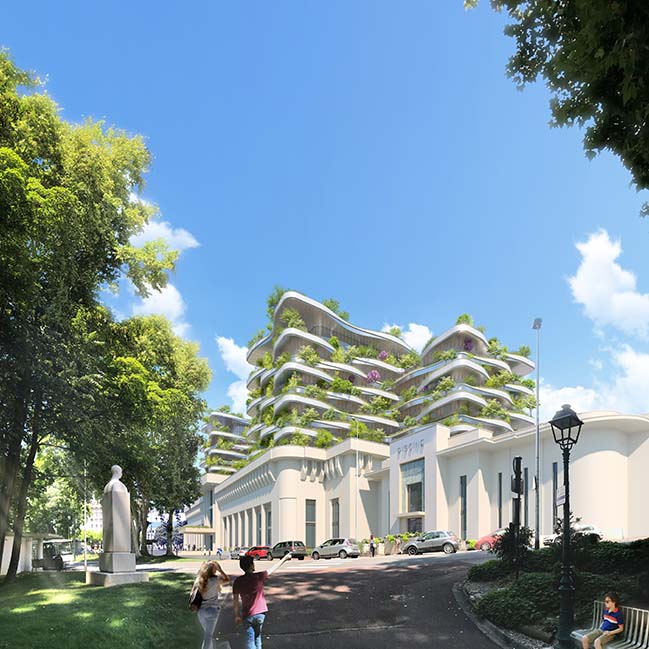 The architectural part is to poetically generate an architecture while moving whose facades recall the waves generated by the waves of Lake of Bourget. Thus two graceful silhouettes with fluid and vaporous curves emerge from the main facade of this great vessel whose thermal past is proudly displayed.

The right of way of the two building blocks respects precisely the playground delimited by the architect of the inheritance. It takes advantage of a maximum of floor space to stay as low and discreet as possible while ensuring each home receives maximum natural light. The layout respects the rhythm of the voids and solids of the historic building whose patios are cleared and the domes spanned.

The staggered waves of the facades are studied in detail to be able to plant large trees that grow on two floors. A double planter system ensures a variety of colors and fragrances throughout the seasons. The front planter will be maintained by professional gardeners for a convincing result all year round. Conversely, the rear planters will be left to the free ownership of each inhabitant so that he can grow his own fruits and vegetables on compost mounds in permaculture.

The project projects its two narrowest façades to Place Maurice Mollard and extends its "L" program along Georges I Street to safeguard a harmonious dialogue in terms of volume and proportions. The rounded corners of the buildings reflect the Art Deco vocabulary of the Pétriaux facade for the sake of aesthetic descent. 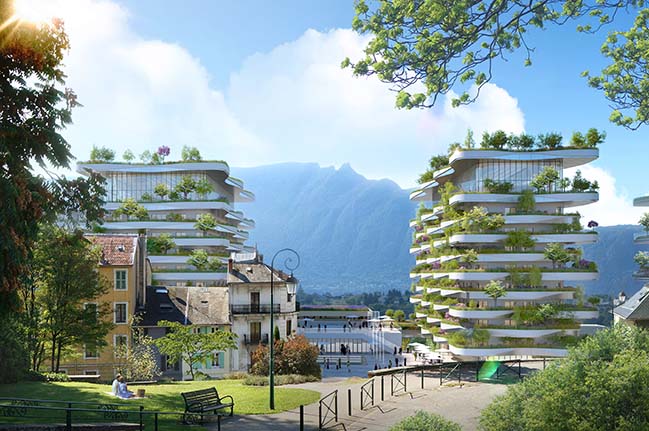 The goal of the project is to meet the ambitious objectives of the 2020 TR of the European Commission by building a BEPOS, a Positive Energy Building producing more energy than it consumes and reducing its carbon footprint. 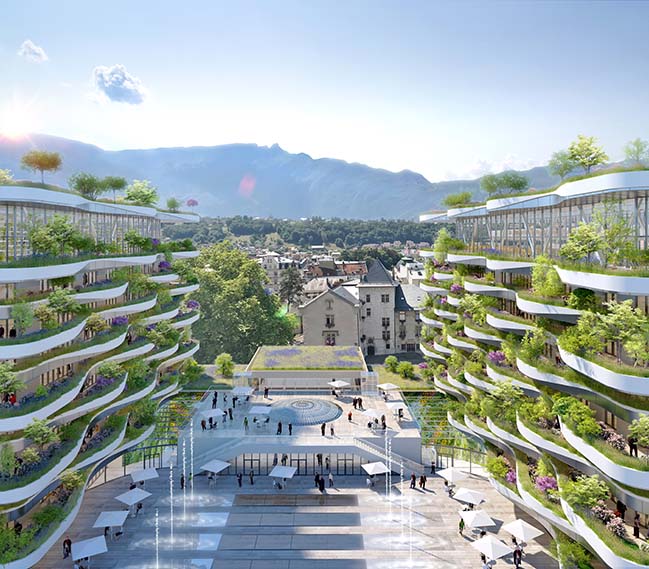 In the respect and the development of the heritage and the environment, an important work of reflection was carried out to arrive at two scenarios viable at the urban, technical and ecological level.

The project, "The Foam of Waves" laureate of the public consultation, aspires to make vigorously beat the heart of the thermal city of Aix Les Bains by magnifying with a contemporary architecture this fabulous liner which for centuries contributed to the " well-being "of Aix and the image of the city.

Ensuring new urban continuities while stimulating a new social dynamic is the main challenge of mixed-use programming in the city center, which will be refined.

The denser a city is, the less energy it is.

In a logic of densification of the city centers fighting the urban sprawl in France and the waterproofing of the grounds, the project is developed around the pedestrian and the porosity of the urban spaces to optimize the flows which cross the project and its new open spaces to the public.

Aix Les Bains will thus be able to become an exemplary model in terms of eco-building oriented towards well-being.

Metamorphosing is turning the caterpillar into a butterfly. Click here to view more detail of the project. 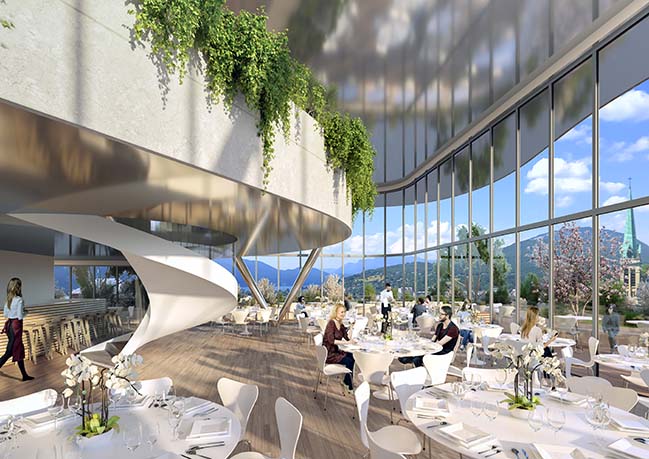 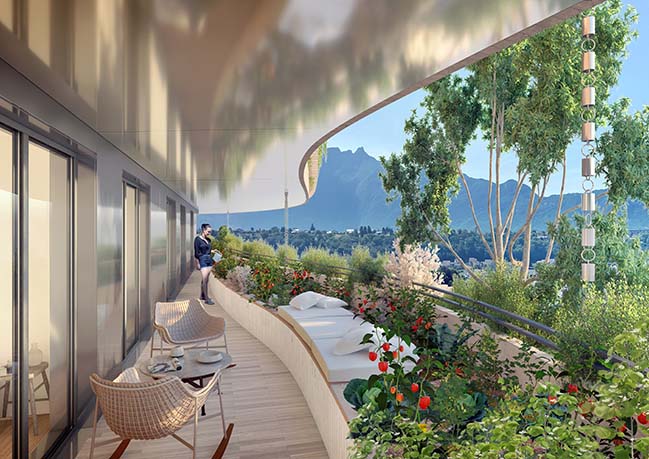