A growing family sets out the necessity of enlarge their home of three rooms and 85m2 by adding a second apartment, originally with two rooms and 60m2... 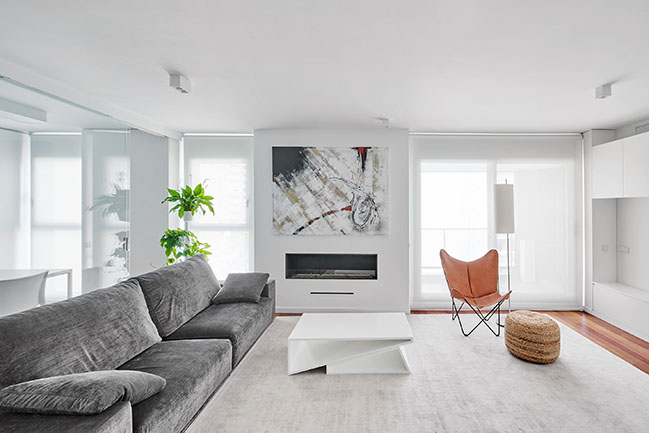 From the architect: The main premise to keep in mind is that the family has to be able to keep on living in their own home during the construction course. 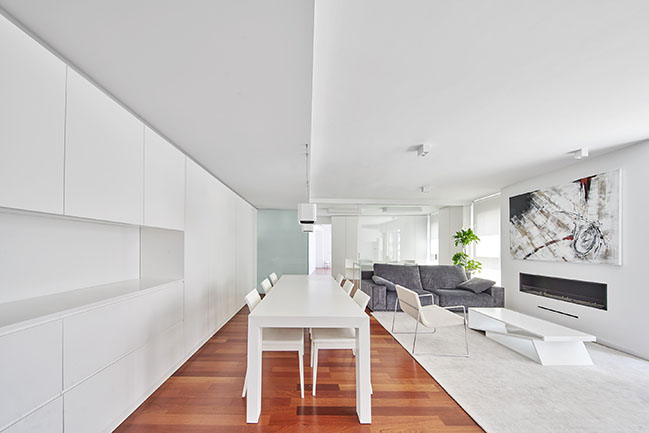 The morphologic analysis of the original apartment emphasize that the night space presented a functional distribution of three rooms and two bathrooms, with minimum circulation area and a suitable size. Furthermore, day space presented an excessive fragmentation and a smaller size. That’s why it is chosen to keep the night space and remodel and enlarge the day space, excluding the kitchen. 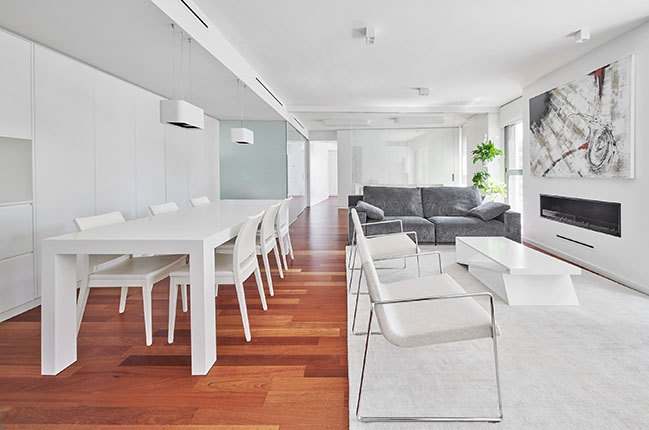 Second apartment was divided in several tiny rooms, and it showed an arrangement that didn’t allow a suitable fitting with the first apartment. Facing the radical spatial change outlined with the enlargement of day space, keeping any kind of component is rejected, empting the apartment as a preliminary step before incorporating the new distribution. The only component that is preserved to be replaced is the natural wood pavement. 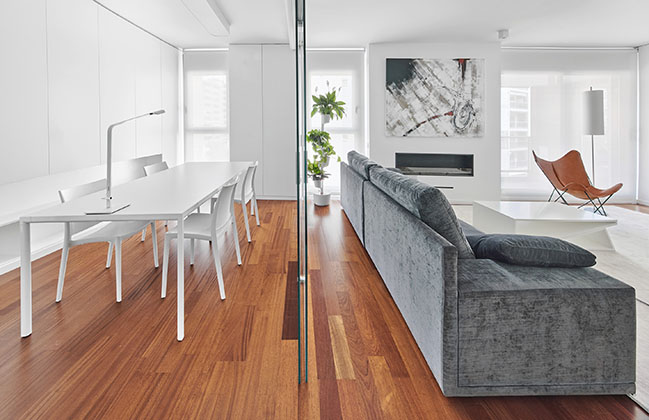 The program requested in the area where it is decided to work, consisted in a larger living-dining room, a study, a multipurpose laundry room, the main room with its own bathroom and a storage space.

It is decided to emphasize the horizontality with that home connects with the exterior by creating a spacious day space and a study, separated only by moving panes and curtains, that allow to join or divide visually and acoustically both spaces when necessary. In this way, a wide visual perception space is created, that transforms this day space into a neuralgic, illuminated and wide area, which takes advantage of the geometry to get all the requirements done. Inside this day space it is also set the multipurpose laundry space, closed by dividing translucent panes, fixed o moving, with a dual purpose: his own one and to turn into a light box when the room is closed after its use, all at once. 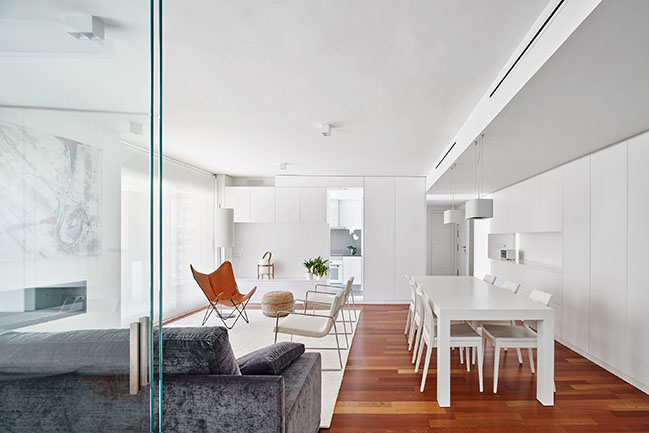 At last, and in contact with the bigger terrace, it is placed the main room and its bathroom, separated of the rest of the rooms using wardrobes with integrated doors, so that there’s no circulation space or partition walls in the intervention area. Partitions are made using panes or cupboards strategically located so that it avoids the need of creating a storage space as well as it allow the crossed air circulation. That’s because the final apartment has a second façade with a different aspect. 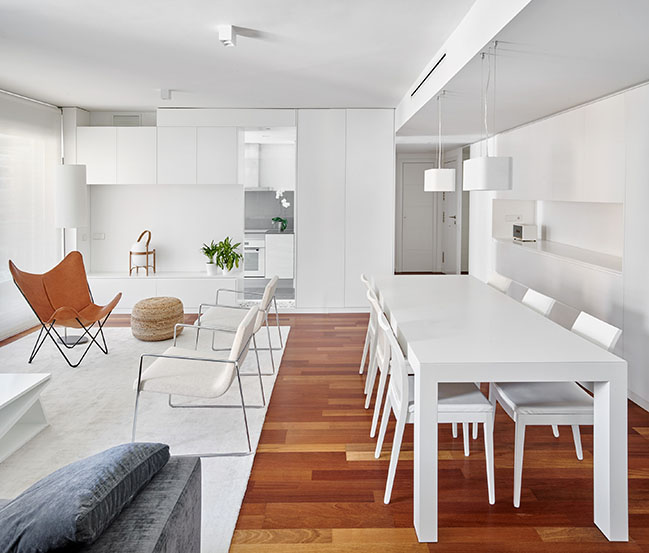 The final home gets a unique day space, a kitchen, four rooms and three bathrooms, located in a way that the day space separates the main room from the rest. Regarding materiality, the existing dark wood pavement is complemented with a neutral color-scheme, plants, a fireplace and several elements of furniture and lighting, so that it creates a cozy home as well as with a wide space perception. 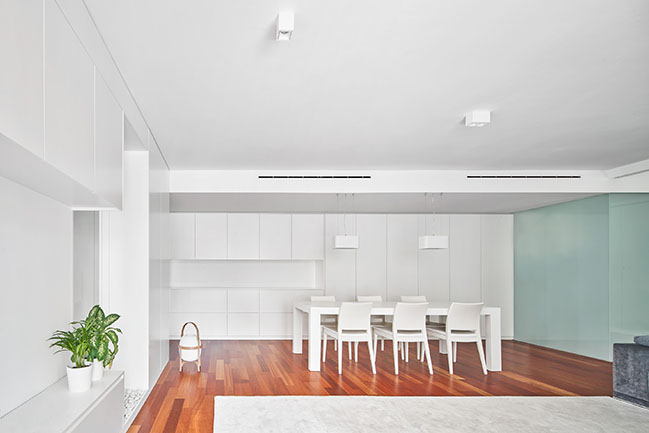 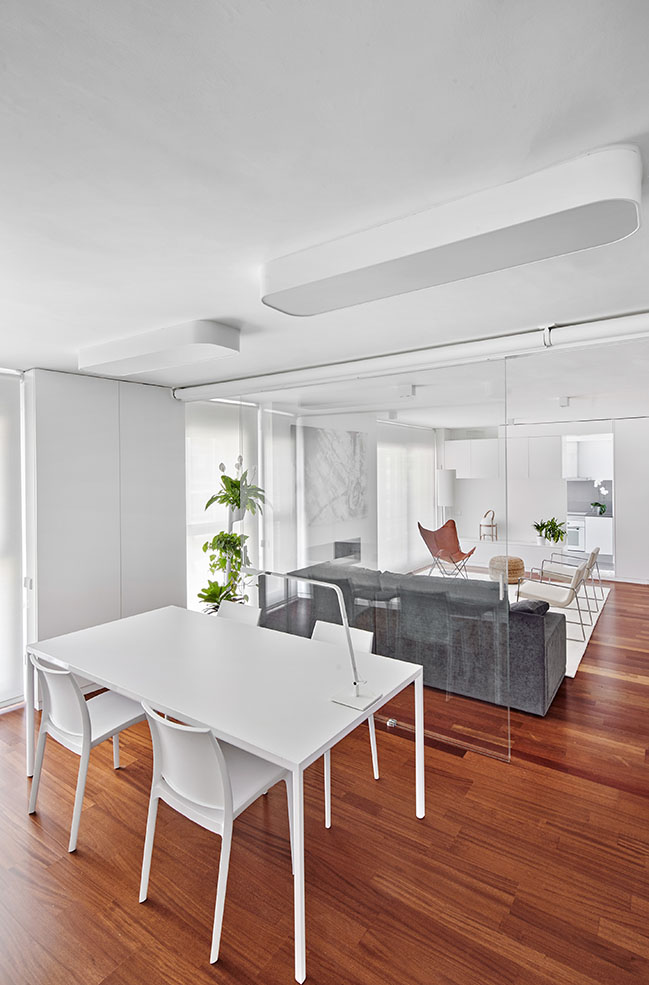 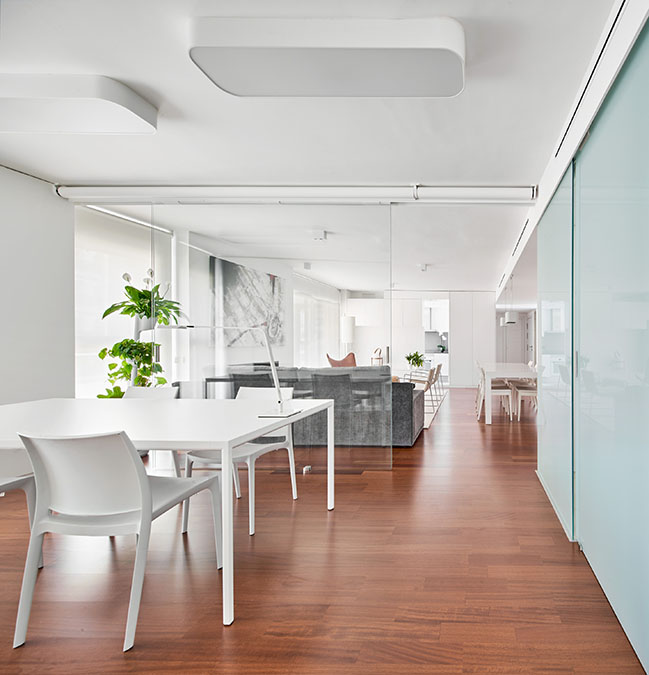 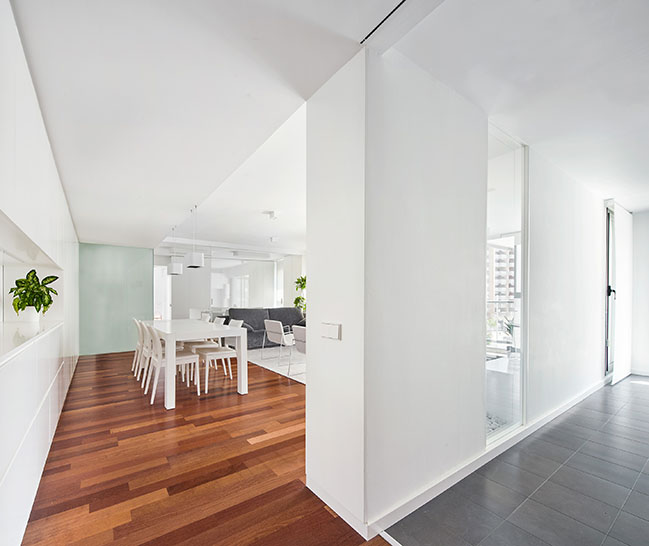 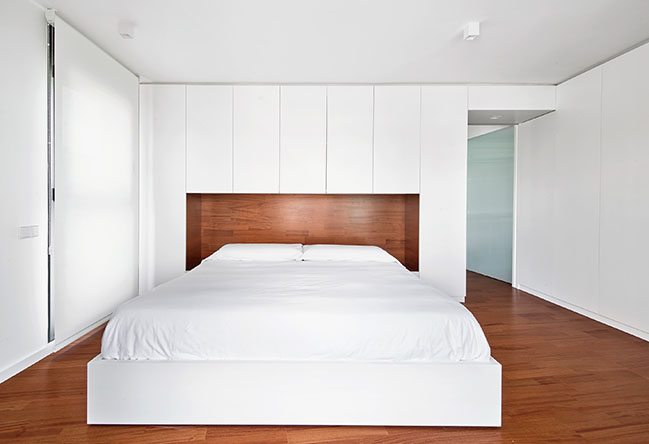 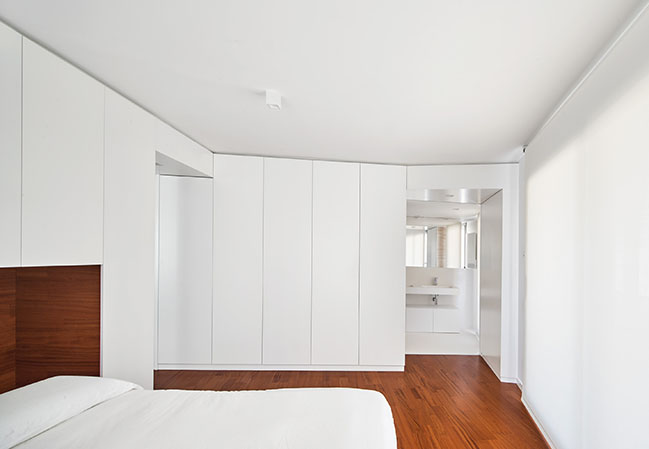 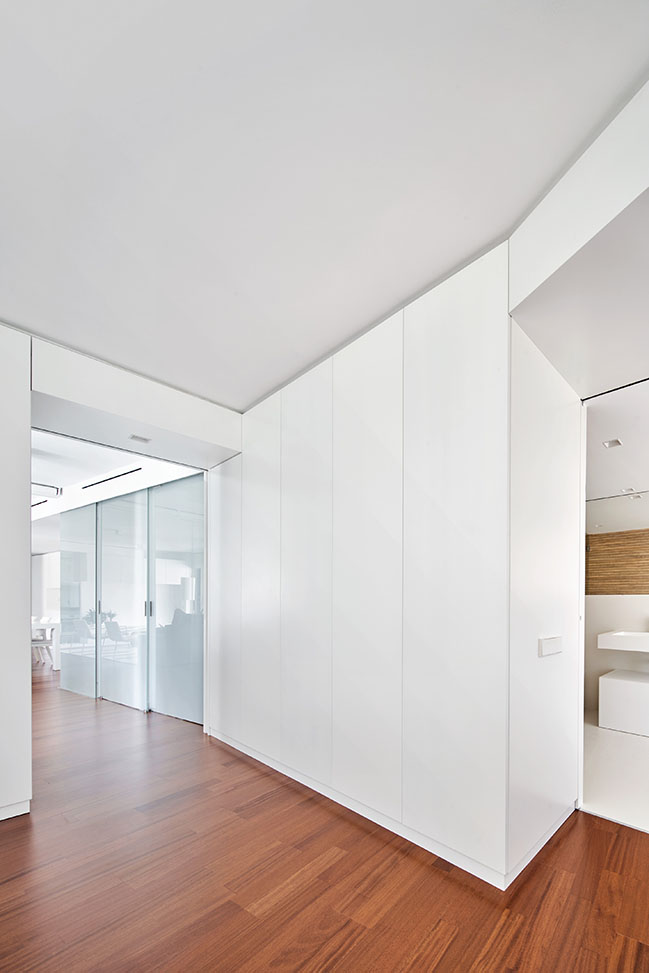 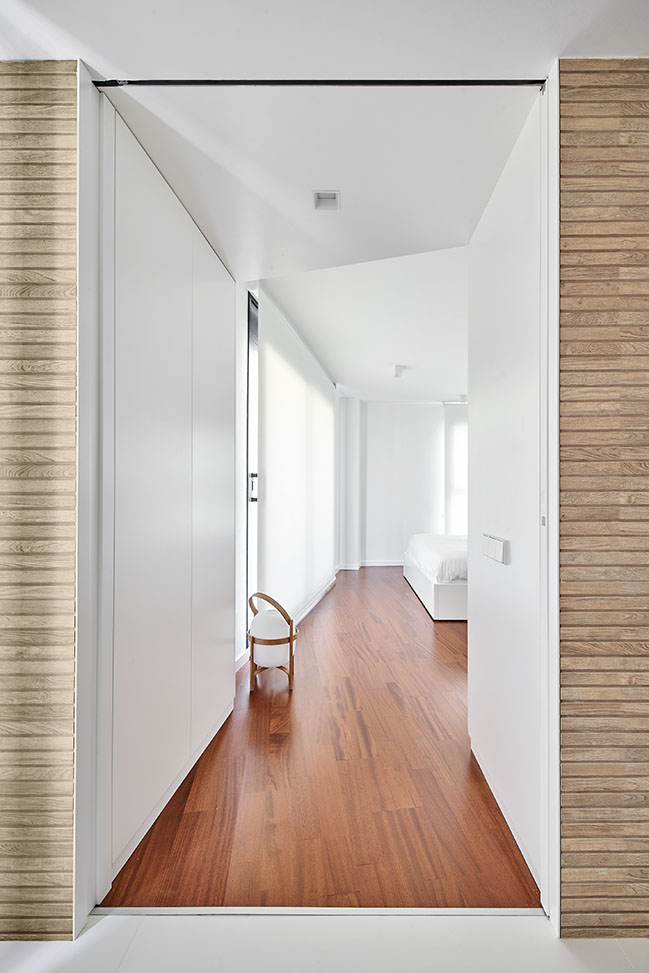 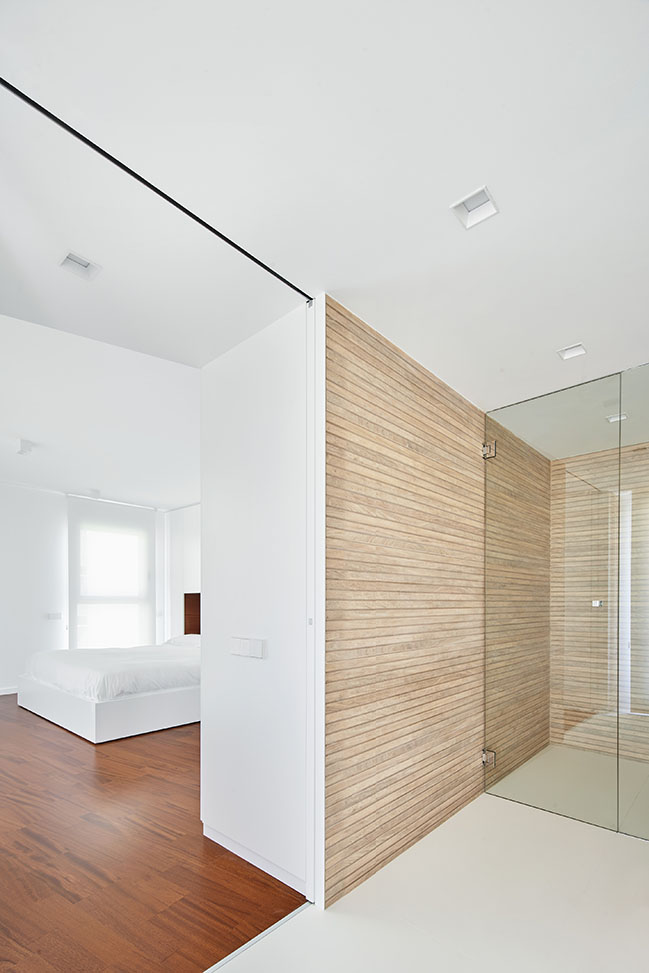 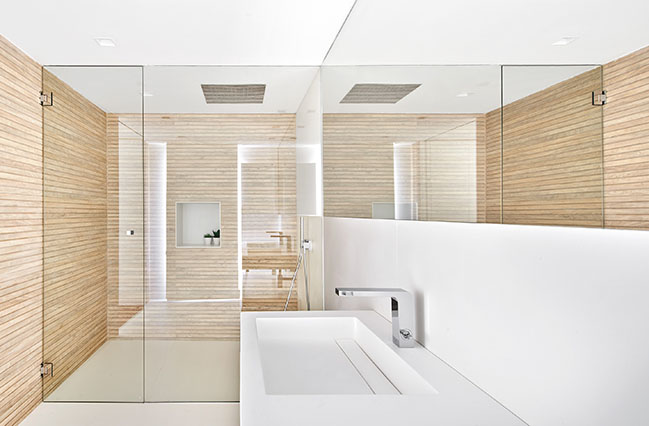 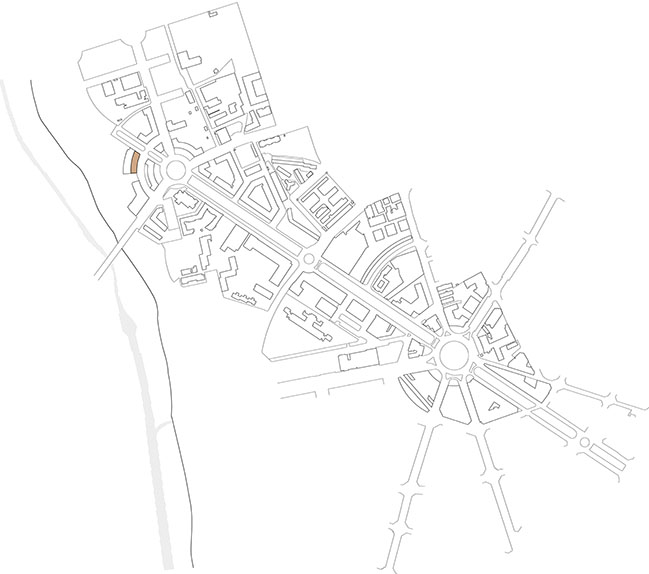 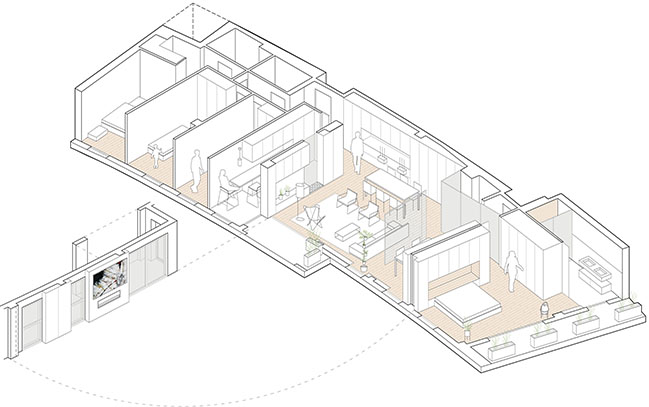 02 / 25 / 2020 A growing family sets out the necessity of enlarge their home of three rooms and 85m2 by adding a second apartment, originally with two rooms and 60m2