Located in an 80-year-old modernist building in the heart of Tel-Aviv, “DE Apartment” was renovated by architect Meirav Galan... 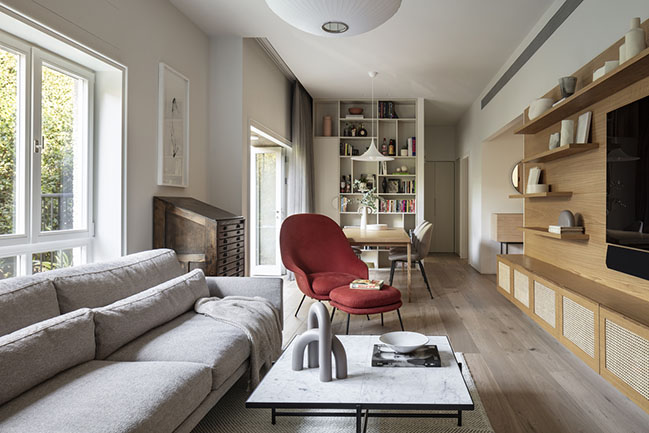 From the architect: Fascinated by the unique wooden windows and meticulous craftsmanship details of the building, originally designed by renowned Israeli architect Dov Karmi in the 1940s, Galan knew she wanted to preserve the nostalgic vibes while ensuring that the space meets its contemporary needs and becomes a cozy home. 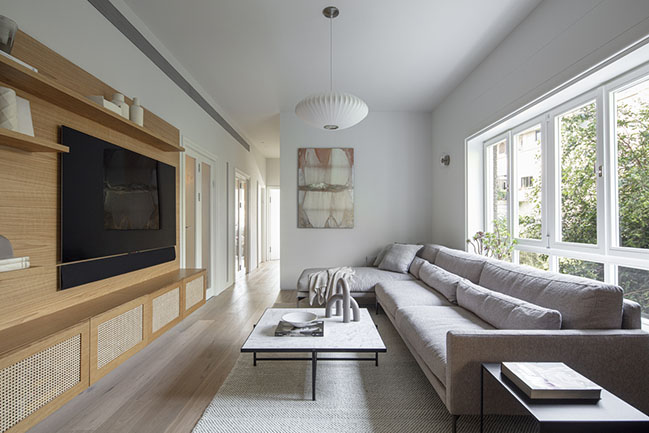 The 160-m2 apartment was originally planned as two separate apartments and had an unclear design scheme as it had been artificially connected from the beginning and functioned as a shared apartment in recent years. 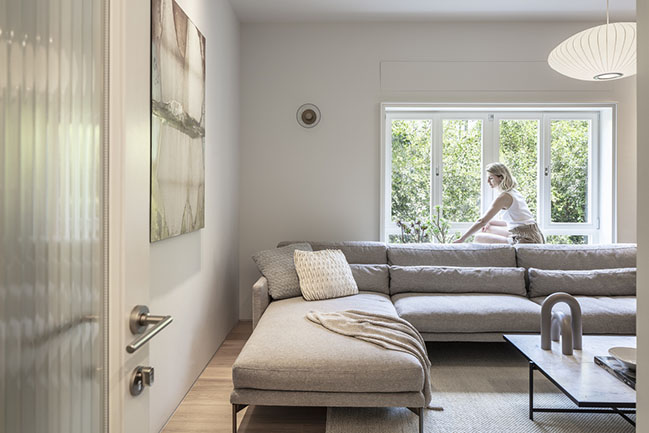 The new owners of “DE Apartment”, a family of five, came with a list of dreams.

“On our first meeting, my new client told me: ‘I knew you were going to be our architect! I have made a board of goals a few years ago and you were on it with a pinned photo of one of your projects” Galan describes. “That touching sentence overwhelmed me and I will treasure it forever.” 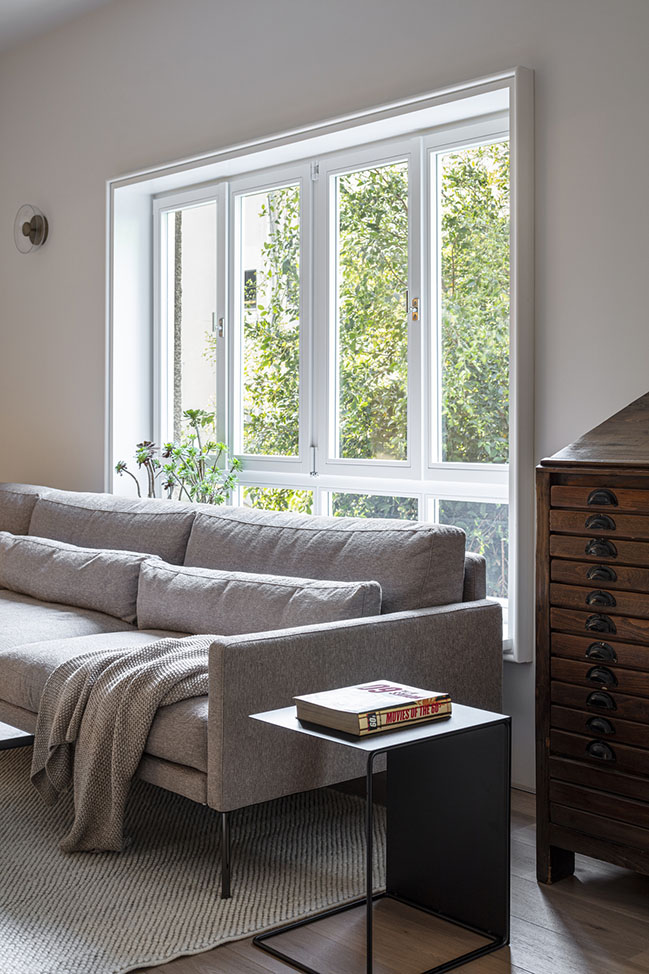 The couple’s requests mostly focused on functional needs and a wish for a warm space with a tranquil feeling. But, one request was facing an inner contradiction. While the wife was dreaming of a big separated kitchen with a door, the husband wanted one big living space with an open kitchen. 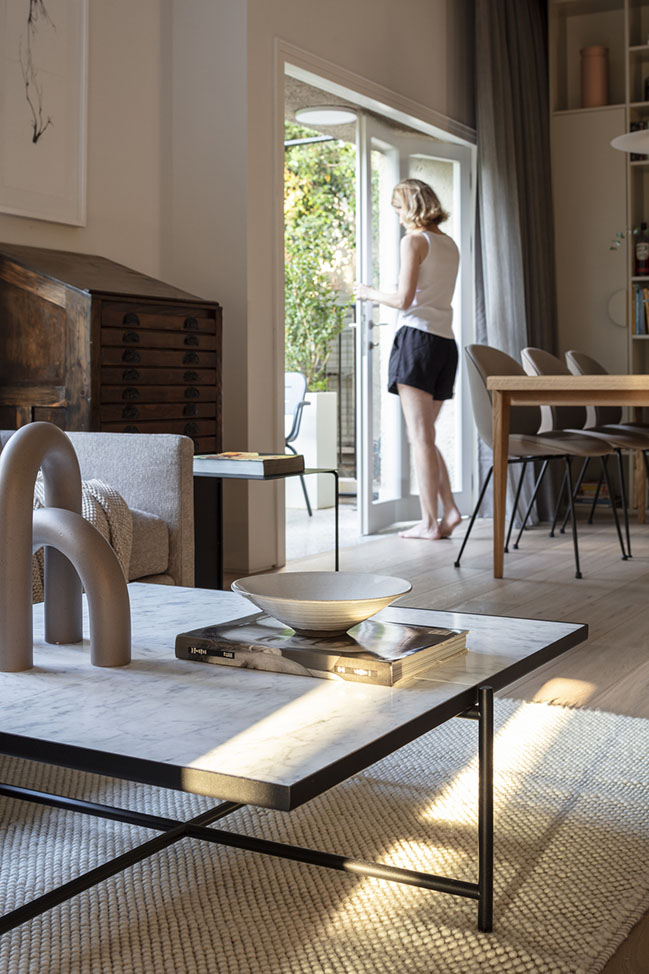 The first step was analyzing the existing construction and mapping the plumbing zones in order to avoid drastic changes that could harm the building. Then, detailed documentation of the dilapidated but beautiful doors and windows was executed to reproduce them with improved thermic and acoustic qualities. 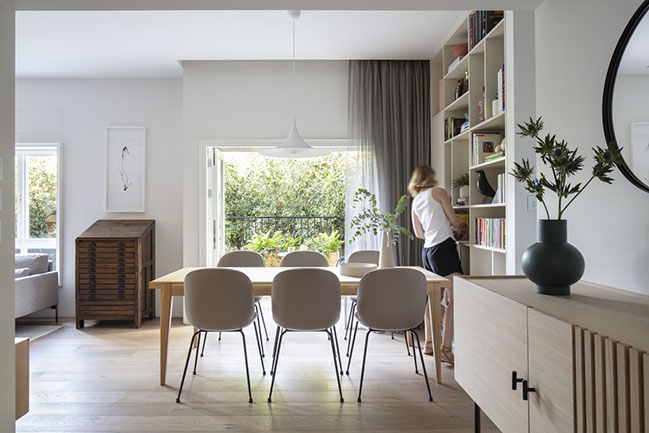 The design process began by removing all interior partitions and defining a clear new architectural scheme “that was essentially about my instincts and feelings” describes Galan. The new scheme corresponds with the locations of the beautiful windows and the main circulation runs along the apartment, parallel to the structural grid that was hidden in the new interior walls. 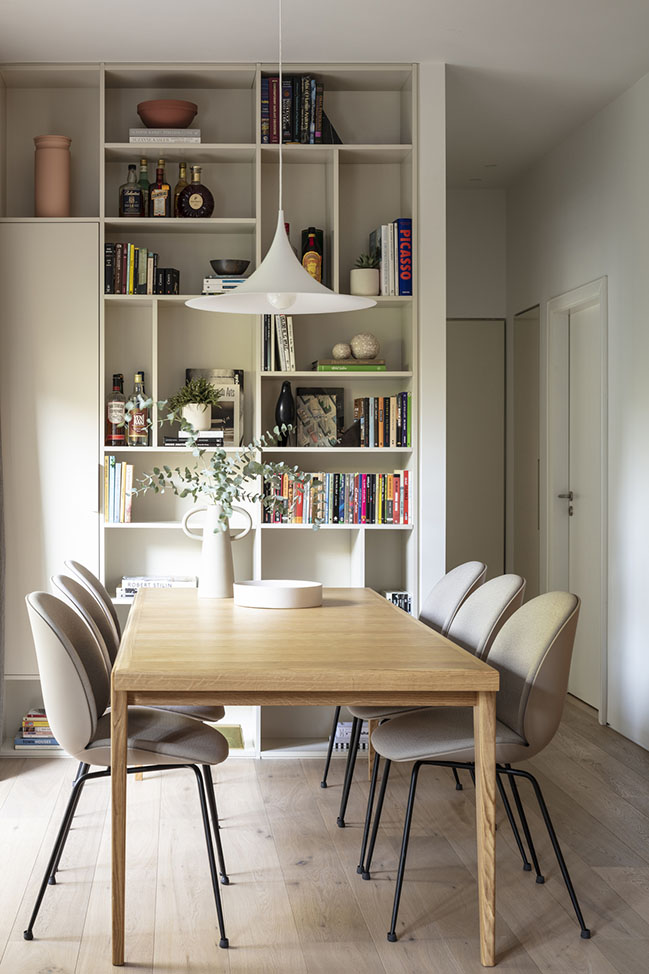 An intimate hall was designed at the main entrance and a back entrance hallway was added to the apartment connecting it to the exterior elevator that had been recently added, enabling a secure and acoustically separated accessible entrance. 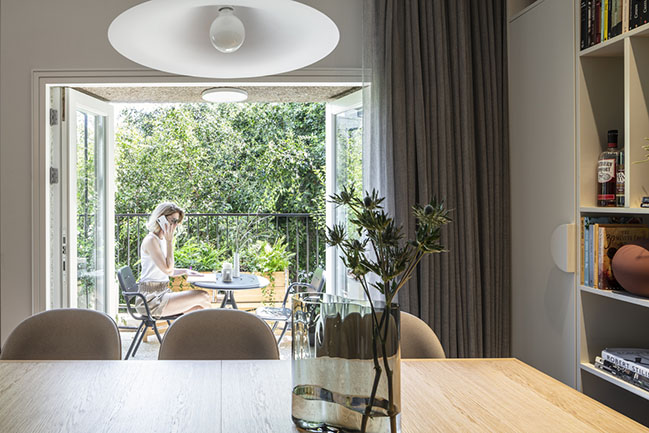 The living room was designed at the center of the apartment and the bedrooms were designed on both of its sides to minimize the corridors’ area. 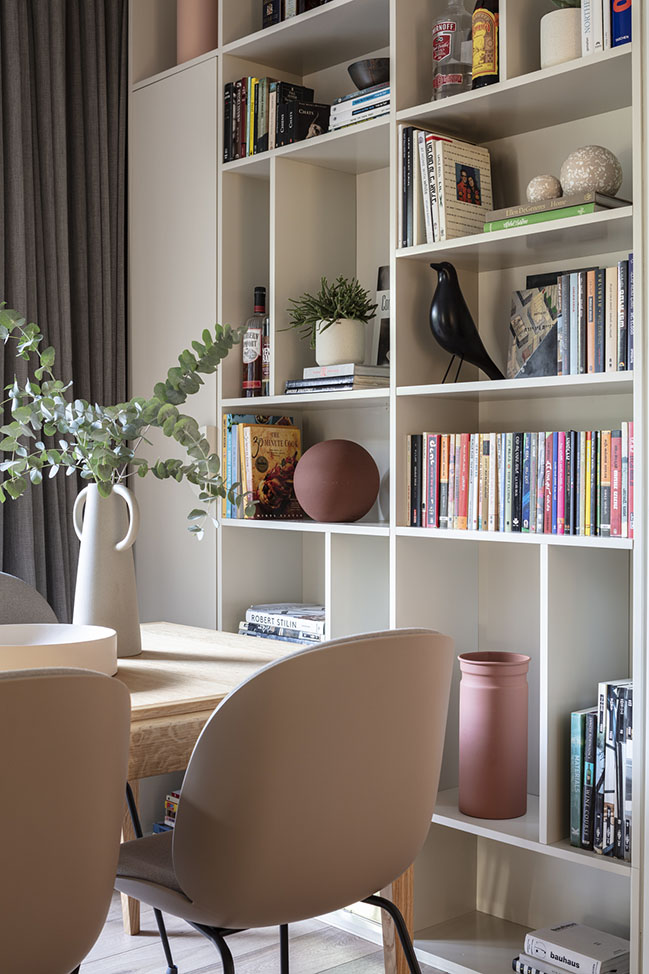 A large kitchen was designed as a separate space, as requested by the wife, separated from the living room by two very wide bi-fold doors, inspired by the original balcony’s doors, and a wall (that conceals a column) between them. When folded and fully open, a continuous feeling of one living space is achieved, as requested by the husband. 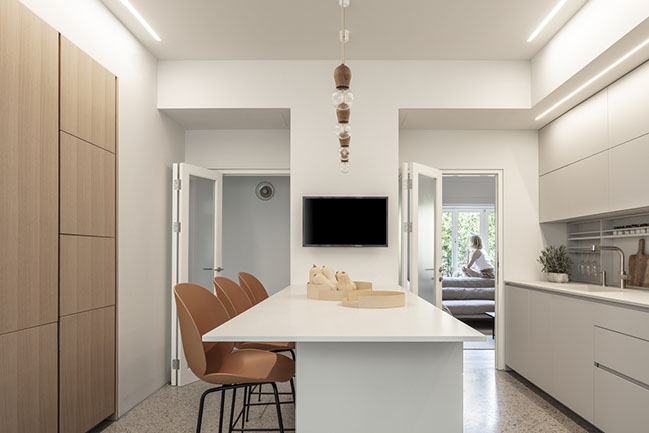 A bespoke steel-framed windows partition, with translucent striped glass, was designed to visually separate the kitchen from the service balcony that was widened inwards. The partition was designed as a contemporary interpretation of the original windows found in the building’s staircase and lobby. 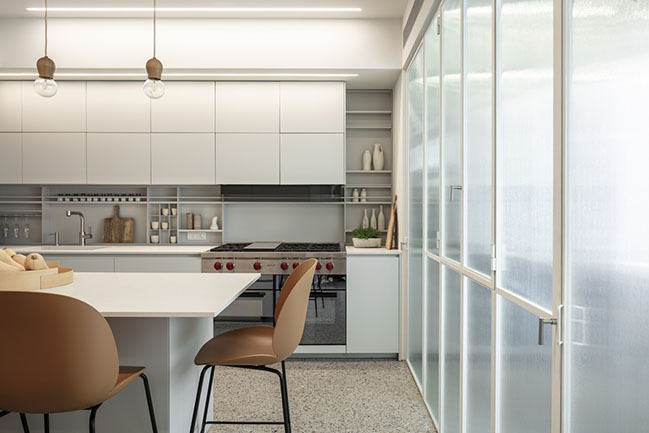 The interior design is a balance between original mid-century and contemporary, between European and local, between richness and simplicity, between bespoke carpentry and specially picked items, as well as between minimalism and softness. 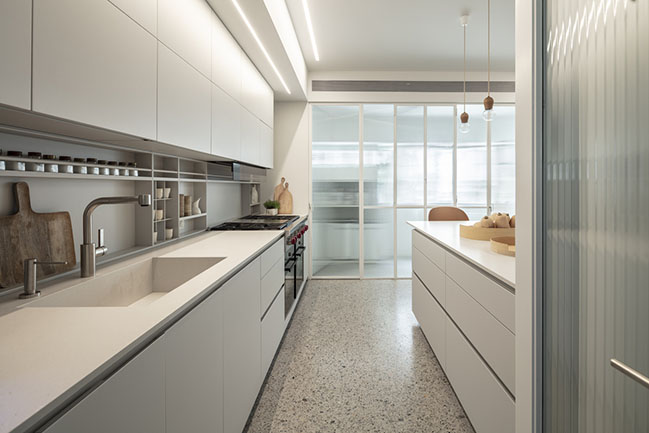 The apartment is relatively big by Tel-Avivian standards, yet “micro-designed.” Each space was maximized and designed down to the last detail including each room with the décor, furniture, and art that support the larger idea. 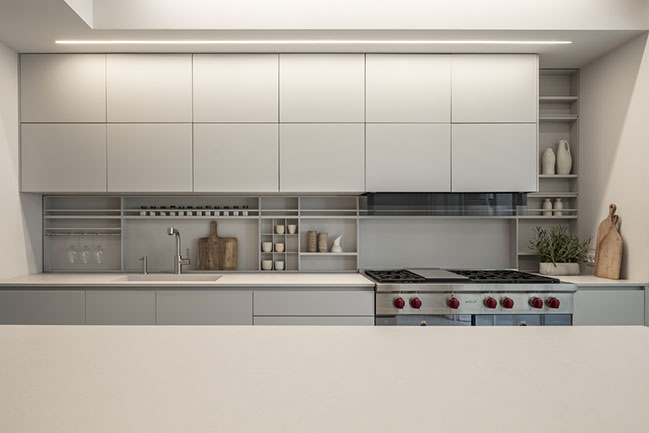 Soft, bright, and natural hues alongside wood, soft textiles, and subtle use of earthy tones and green were chosen to achieve warmth and tranquility. 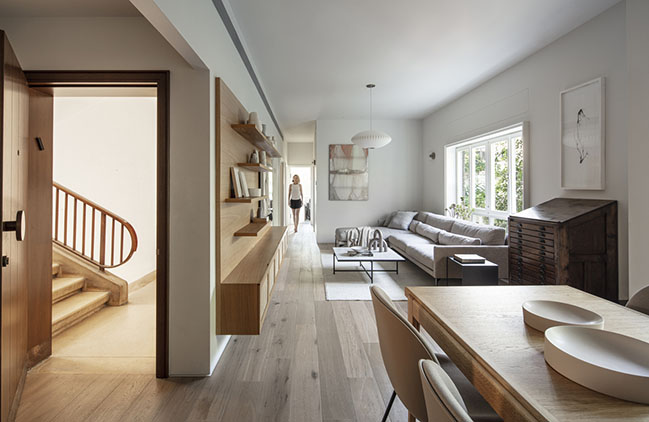 The calmness of the interior is completed by the small balcony, of which its greenery almost touches the Tel-Avivian Ficus trees surrounding the building and slowing the urban pace just a little bit. 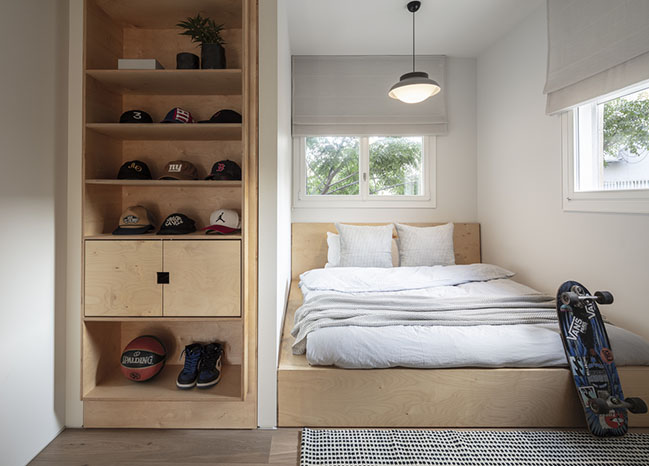 New terrazzo tiles were chosen for the kitchen, the bathrooms, and the balconies as a reference to the original terrazzo that was typical to Tel-Aviv in the 1940s, and a soft parquet was chosen to unite the rest of the living spaces. 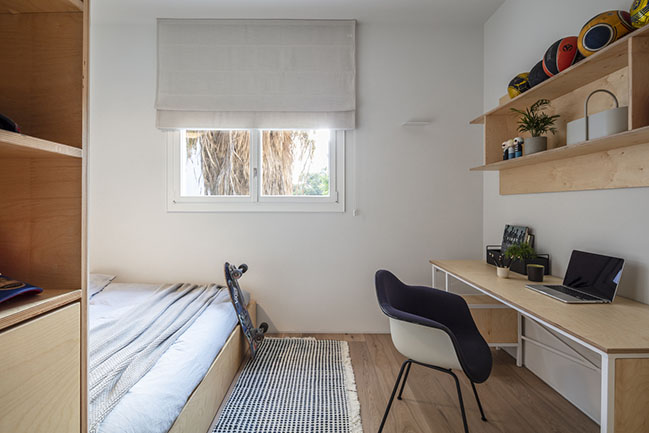 Mid-century modern items, such as the iconic Bubble pendant by George Nelson and Eames upholstered armchairs, alongside private vintage items are combined with clean Scandinavian design features such as Gubi, Nordic tales and Ferm living. 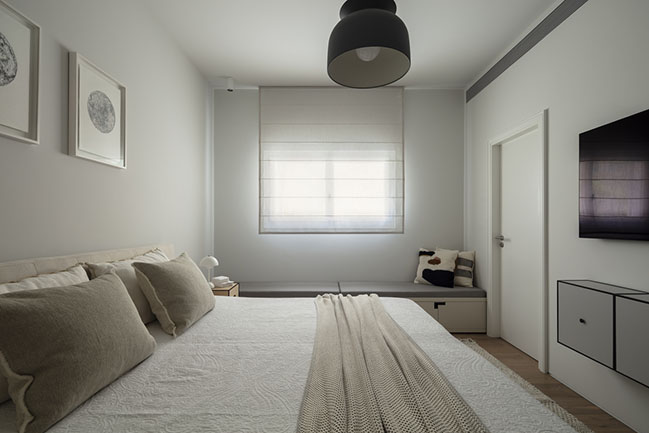 “I fell in love with the charm created in the 1940’s” describes Meirav Galan “I dived in with full passion, gently poured my clients’ dreams into it and in their own words: became a part of its DNA. I am truly grateful and honored for that.” 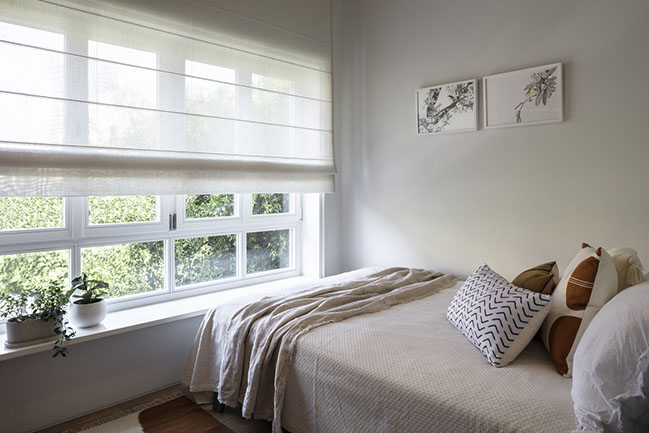 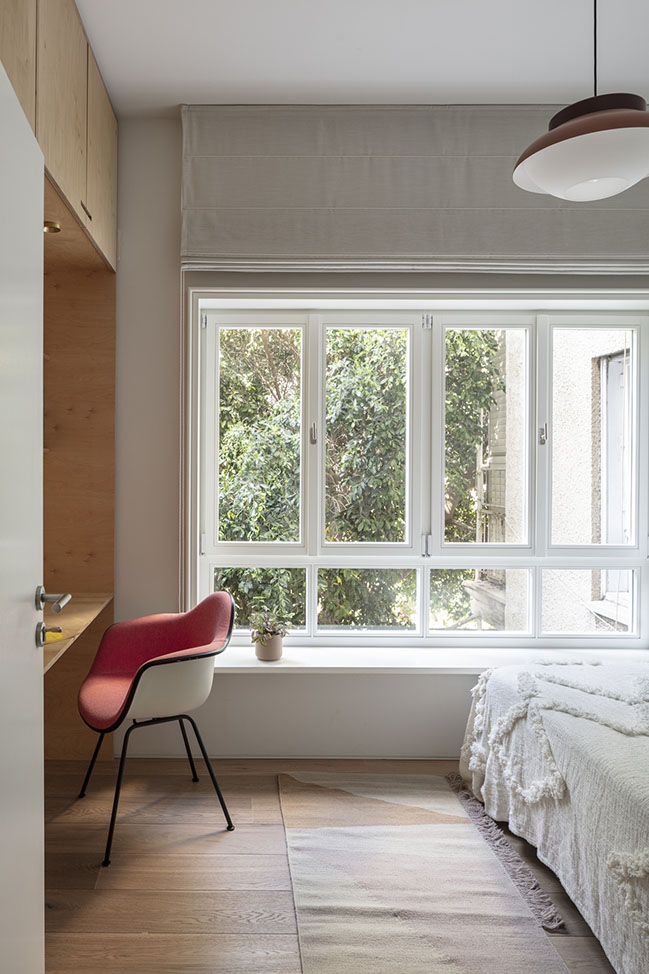 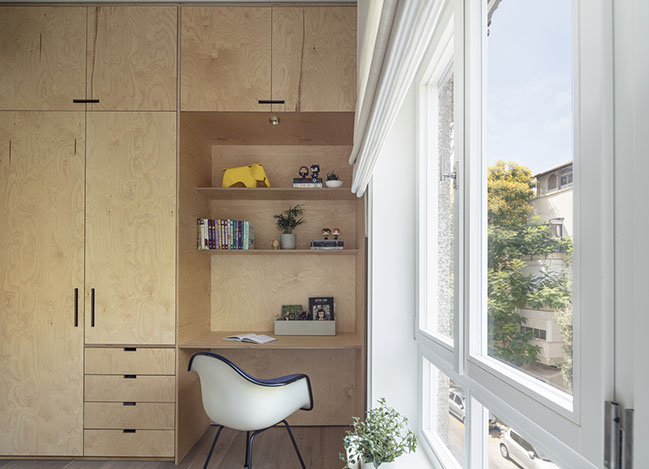 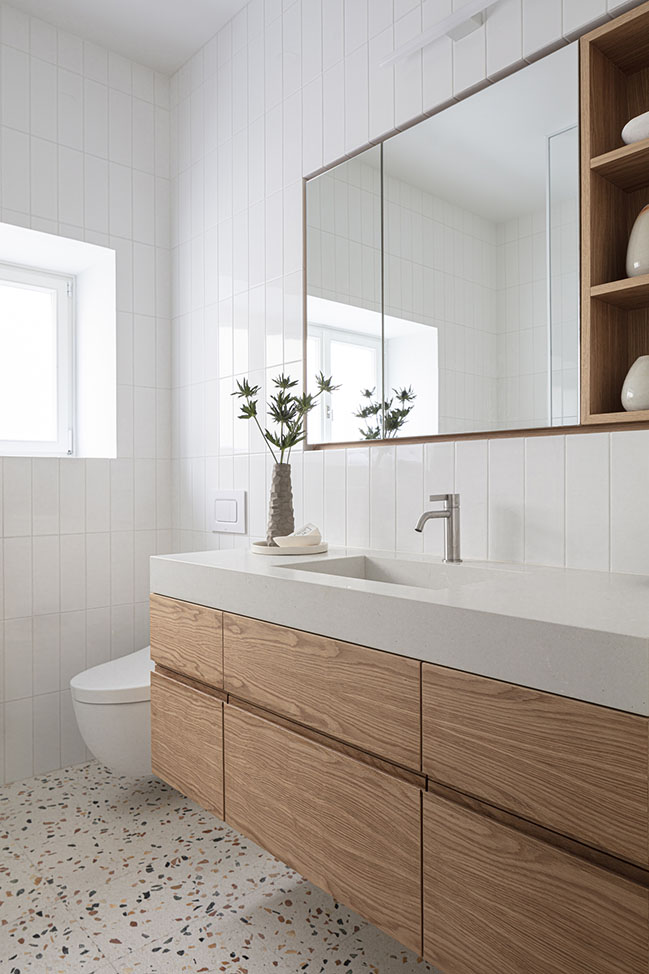 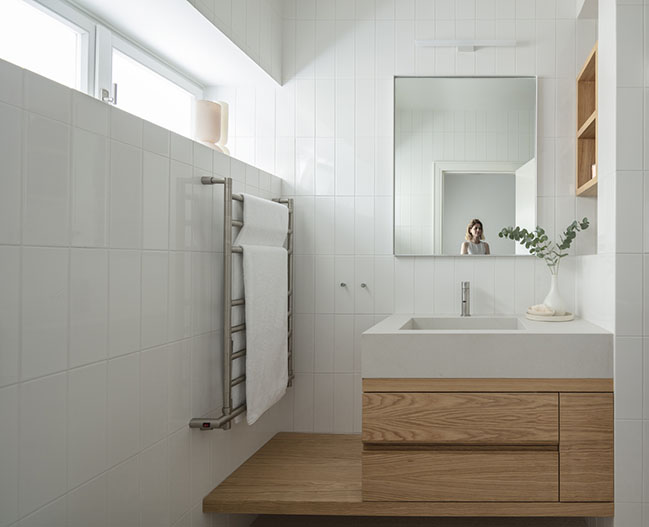 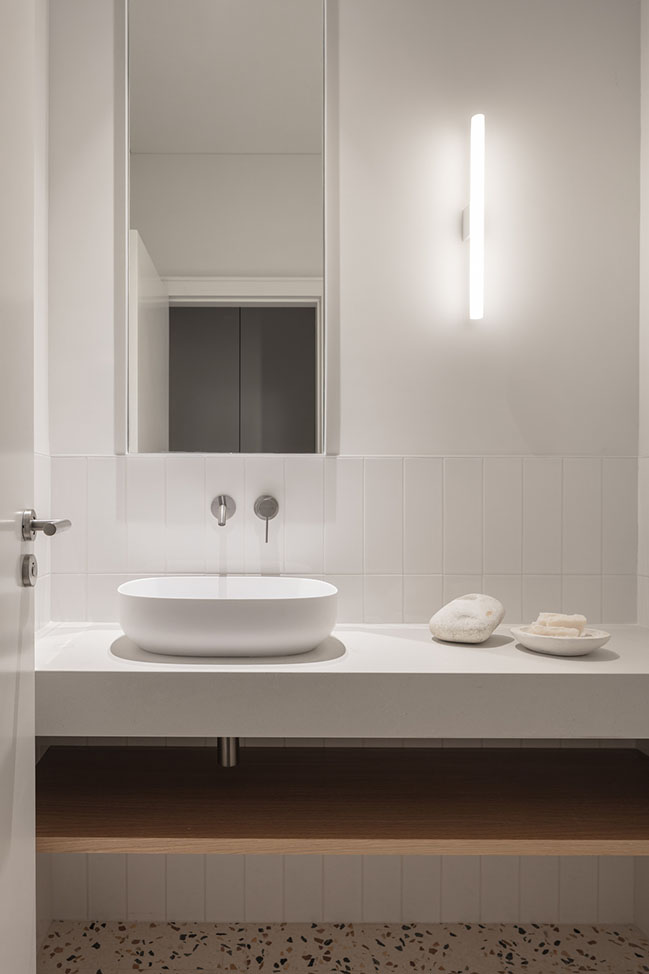 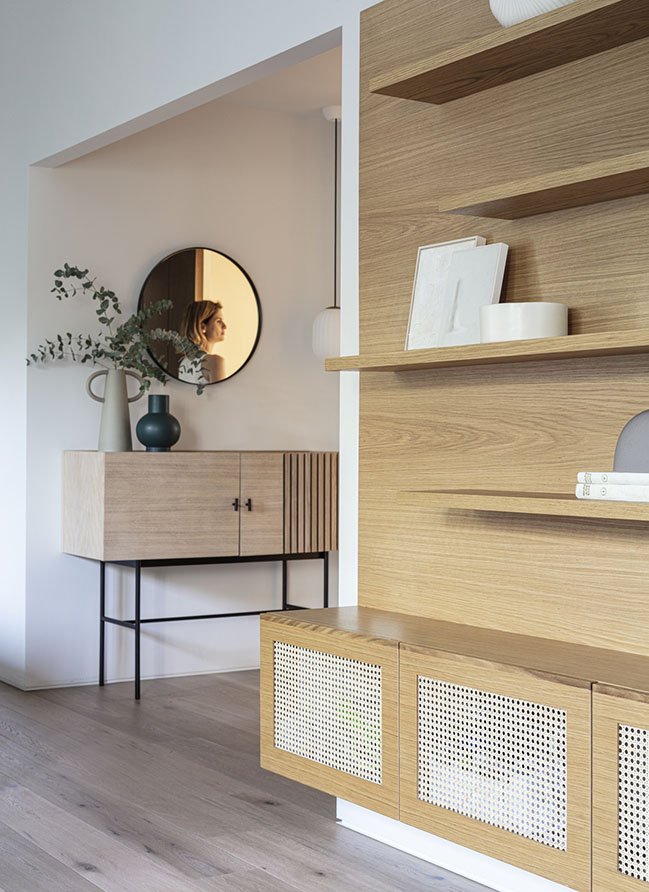 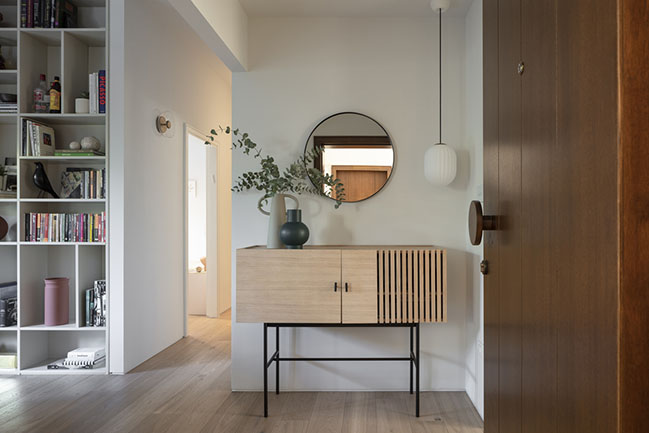 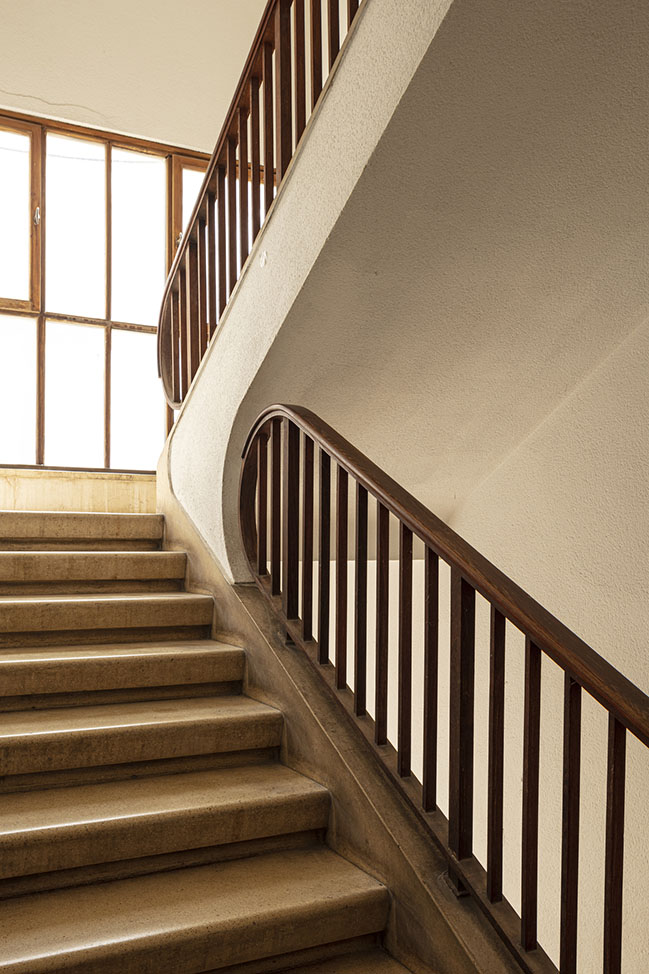 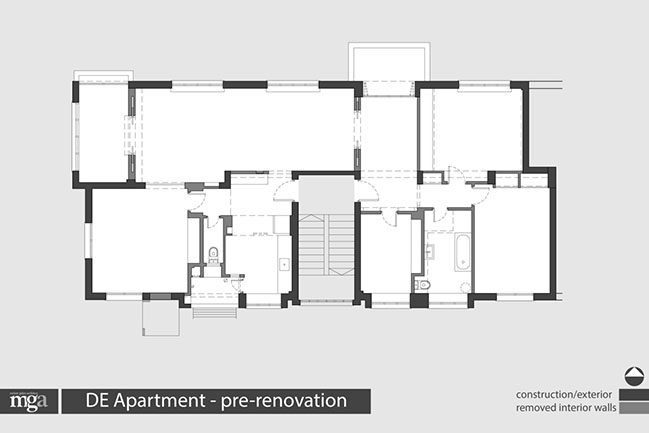 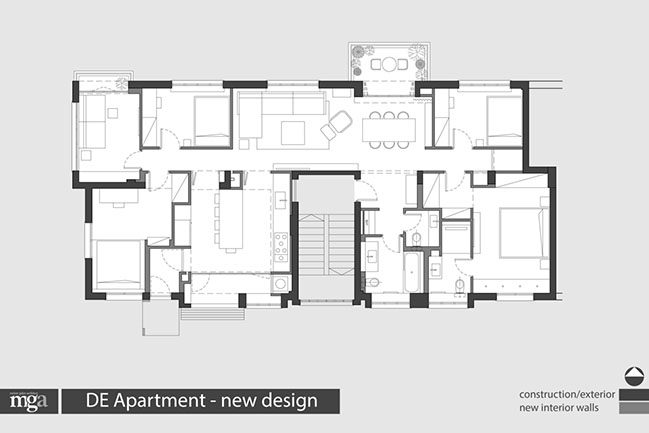 12 / 22 / 2021 Located in an 80-year-old modernist building in the heart of Tel-Aviv, DE Apartment was renovated by architect Meirav Galan...