Apple’s newest store in Taipei, Apple Xinyi A13 opened to the public on Saturday, 15 June. Situated on the eastern edge of the city, Xinyi is a young, cosmopolitan and vibrant area filled with cultural attractions, shops and entertainment spaces. 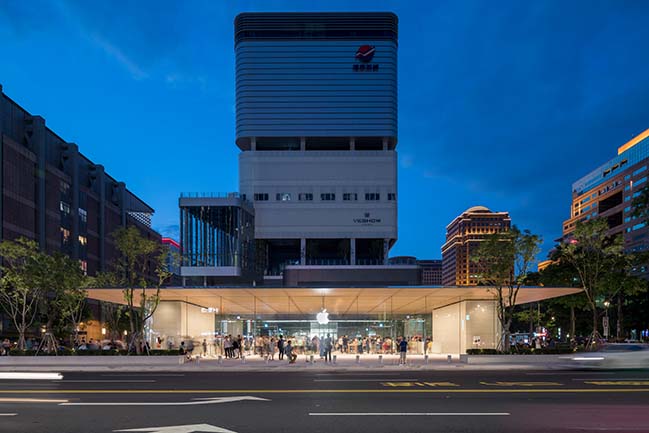 Alongside Taipei 101, it is one of the most popular tourist destinations on the island. Apple Xinyi A13 draws on the vitality of the neighbourhood to create an inviting new plaza with a delicate pavilion that provides a new destination for learning and creativity in the heart of Taipei. 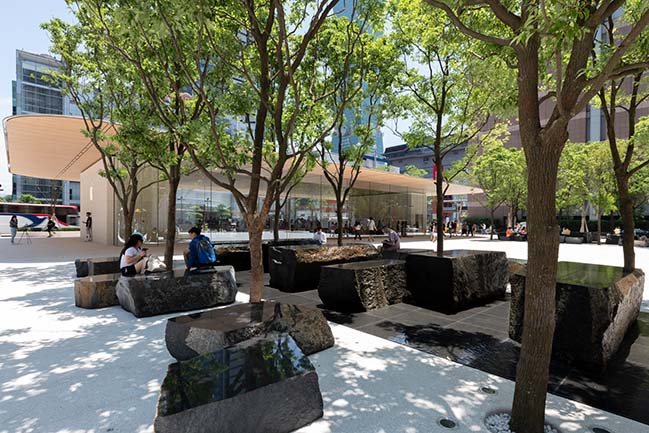 Located on the corner of Songshou and Songren roads, Apple Xinyi A13 replaces a former car park with a simple pavilion and a public plaza, introducing a sense of calm and tranquillity to the area. The pavilion marks a new presence on the street, while creating a new public plaza between itself and the neighbouring building. 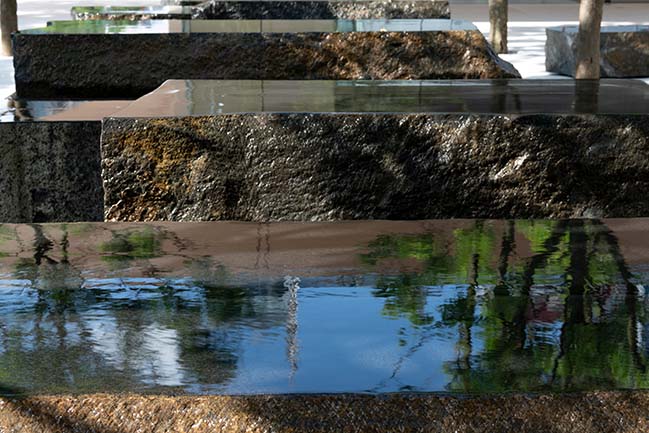 Sir Jonathan Ive said: “Apple Xinyi A13 is in essence, a beautiful shaded plaza with a lovely calming water feature and a small entrance pavilion which takes you down into an Apple store – that is it. Its understated simplicity belies the extraordinary complexity behind the incredibly thin carbon fibre roof, the amazing earthquake-resistant structure as well as the beautiful water sculptures that imbue the space with calmness and serenity. We wanted to design a public space with a building that was so refined that its presence is hardly felt, yet it makes a positive contribution to the city.” 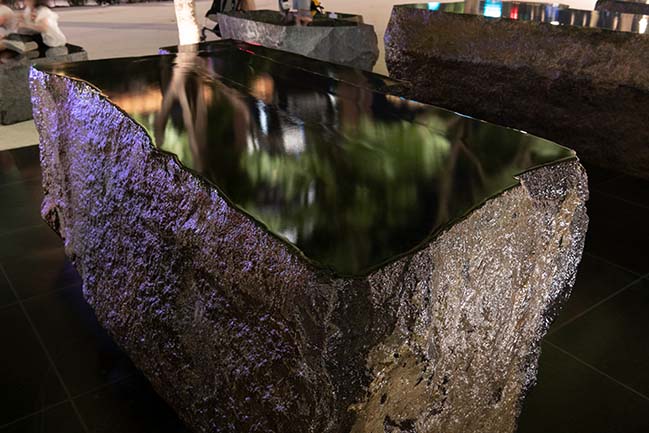 The plaza is an island of calm within the bustling city. It is flanked on two sides by unique sculpted water features, inspired by the staggering beauty of Taiwan’s mountainous geography and the natural rock formations in Penghu. It is a composition of meticulously carved large basalt blocks surrounded by groves of camphor trees for shade. A thin film of water covers the blocks such that the top surface of each block appears as if immaculately flat and mirrored, while the other surfaces are rough, creating a dynamic contrast between handcrafted and machined finishes. There are several nozzles embedded within the ground that release mist into the air intermittently, cooling the surrounding area while creating an ethereal effect, similar to the natural low-hanging vapour-cloud that accompanies cool mornings in Taipei. The plaza is designed as both an everyday space – people can sit and rest on the blocks outside the granite base – as well as a platform for special events such as the New Year’s Eve celebration, with amazing views towards the iconic Taipei 101. 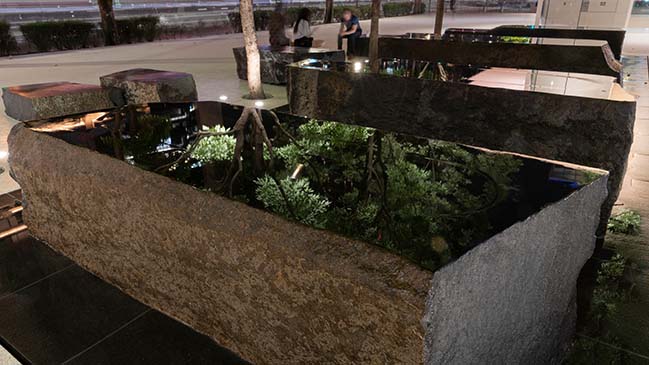 Stefan Behling, Head of Studio, Foster + Partners, said: “I love the water feature and the tension between the manmade perfection and the roughness of nature. We worked through endless models to get the water flow and the underwater outlet right.” 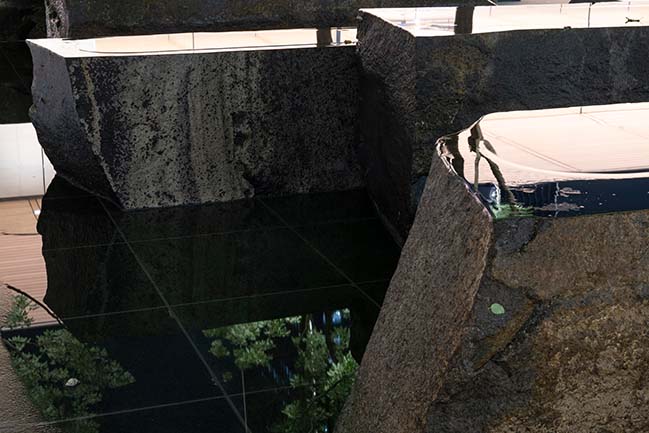 The pavilion’s transparent monolithic glass façades invite people through the store to the public plaza, sheltered by a razor-thin 77-foot (23.4 metre) span carbon fibre roof. Two cores located within the store support the roof while also integrating the services. Passing through the display spaces on the ground level, the store continues downstairs, with the sculptural staircases – inspired by the stairs at Apple Park – adjacent to the two cores leading down to the Forum and more display areas. There are timber ceilings and trees throughout the store that add calmness to the interior. 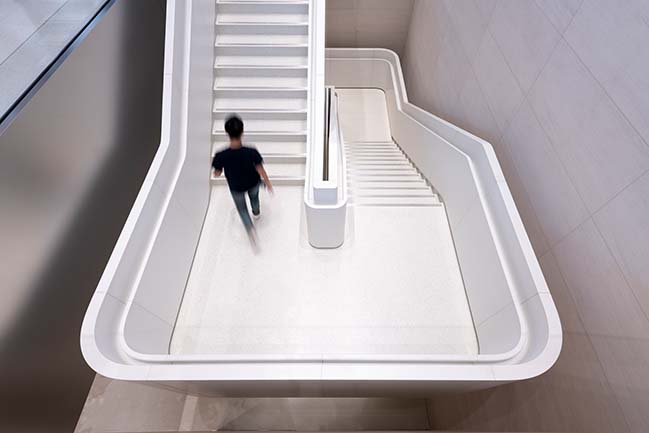 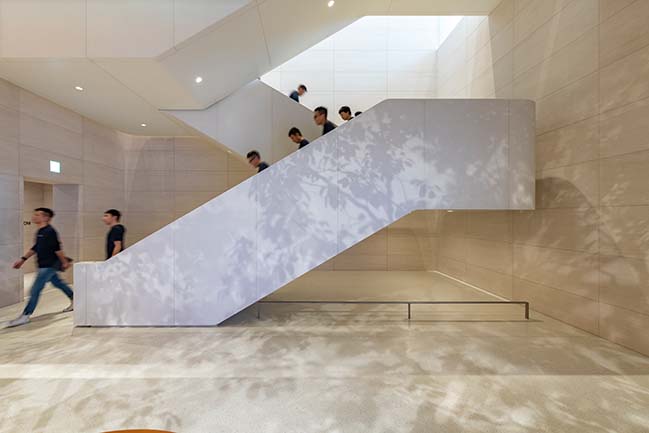